Gravel pits: the attraction of extraction

Building new roads, housing estates and shopping centres conjures up images of concrete-covered acres, but the process does have at least one positive side effect for nature – the creation of gravel pits. During the past century the thirst for gravel and sand to feed our increasingly urban nation has led to the development of many artificial nature-rich wetland habitats around the country, and these in turn have inspired generations of birders to take notice of the natural world for the first time.

Like so many birders I cut my teeth at my local gravel pits, in the Lee Valley on the borders of London, Essex and Hertfordshire, at a site stretching from Waltham Abbey and Cheshunt in the south to Broxbourne and Nazeing in the north. I became hooked following my first visits with the local RSPB group, realising that the likes of Eurasian Bittern and Smew were available to see right on my doorstep. 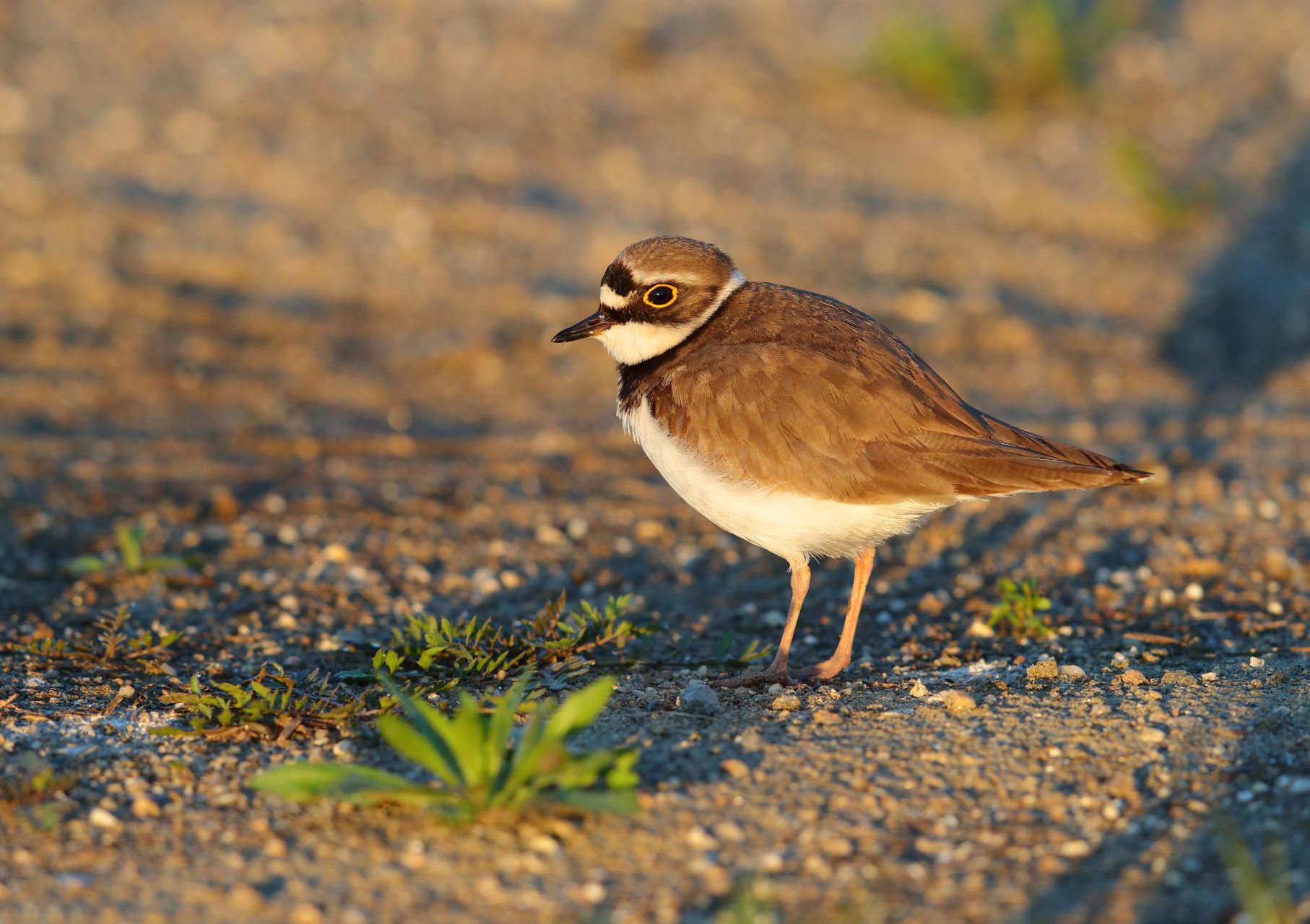 The place has kept me fascinated for nearly four decades, constantly turning up wonderful sights and surprises. It is typical of similar sites around the country that share a common set of habitats and species.

My patch consists of a network of shallow lakes and deeper pits, the biggest being about a kilometre in length, excavated between the 1940s and the 1970s. The Lee weaves its way among these newer constructions and between the waterbodies is a tapestry of woodland, grassland, reedbed and scrub, which makes for superb habitat. Fortunately this site is under the stewardship of the Lee Valley Regional Park Authority, which manages it in a sympathetic manner and has been instrumental in creating new reedbeds, scrapes and wet meadows.

Perhaps the most exciting time for birds is during winter, when regular specialities such as the aforementioned bittern and Smew settle in for extended stays and draw in birders from afar. Other winter wildfowl, such as Common Goldeneye and Goosander add further interest, while Northern Shoveler and Gadwall can occur in internationally important numbers. Extensive stands of alder and birch fringing the rivers and lakes attract flocks of Eurasian Siskin and Lesser Redpoll, with numbers of the former usually reaching three figures. Most years produce a surprise or two, be it a rare Aythya or a flock of wintering Russian White-fronted Geese.

Migrants are channelled through the site thanks to a geographical quirk that is common to many gravel-pit sites. The most gravel-rich substrates tend to be on river floodplains, and valleys such as the Lee act as migration flyways for birds. This, combined with the fact that many of these sites are close to densely populated urban areas (where the material is used for building), is what has made gravel pit sites so popular for both birds and birders throughout Britain. 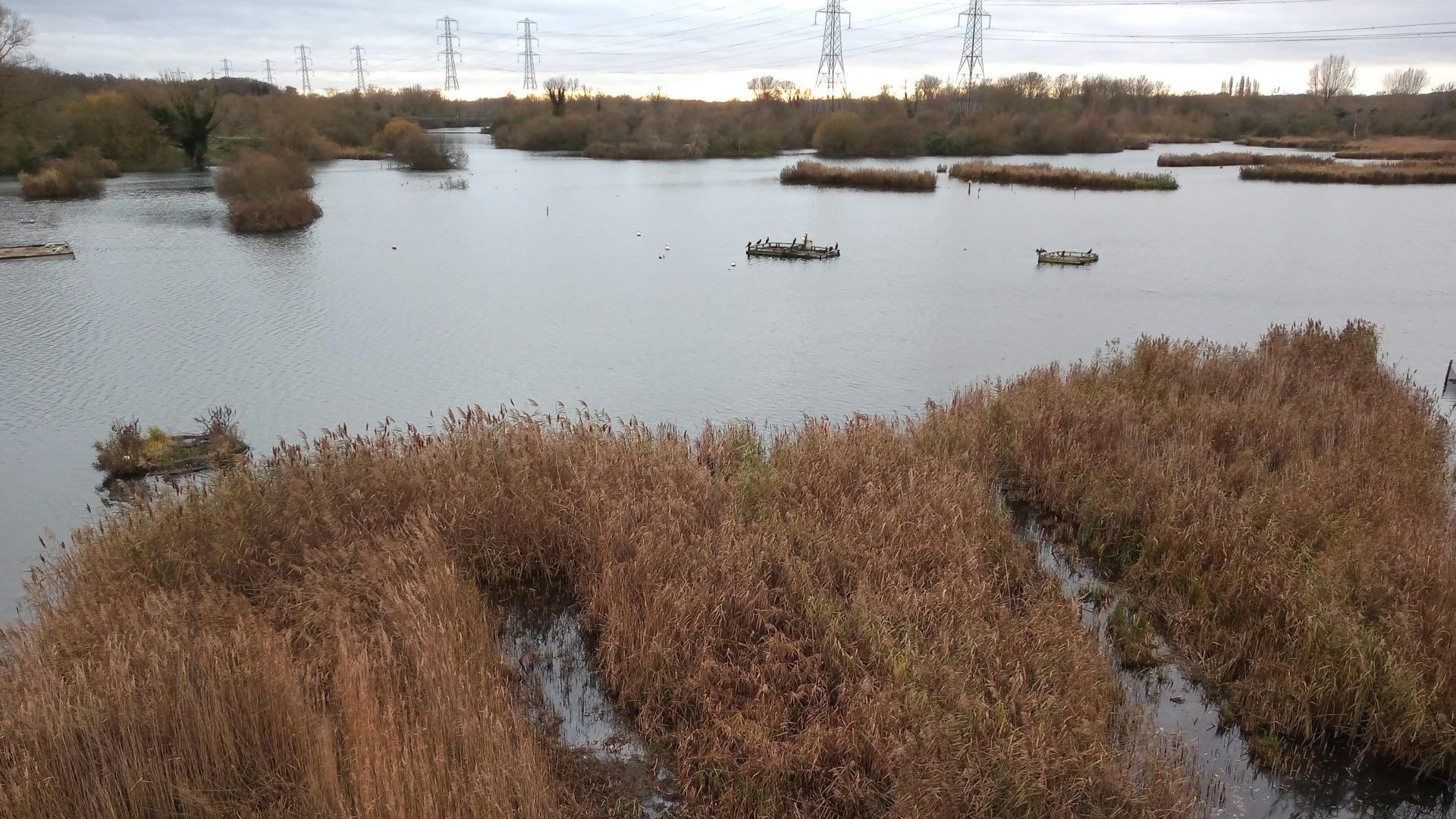 Already a superb area for wildfowl, warblers and many other birds, habitat at Seventy Acres Lake in the Lee Valley has been enhanced by the creation of reedbeds and the provision of a nesting bank for Common Kingfishers (Simon Papps).

On my patch spring passage gets underway with the likes of Willow and Sedge Warblers and Sand Martins arriving in late March and early April. Before long these are followed by all the other 'common' breeding migrants. The suite of birds changes daily during peak passage periods and these times can produce masses of hirundines and plenty of interesting waders, terns and gulls, with possibilities including Little and Mediterranean Gulls, Kittiwake, Black, Arctic and Sandwich Terns, Wood Sandpiper, Spotted Redshank and Garganey. The general rule at this time of year is to visit as often as possible, with good birds coming and going constantly.

Things quieten down migration-wise as summer sets in, although in terms of decibels the valley is at its noisiest. Reed, Sedge and Cetti's Warblers make a cacophonous din in reedier areas such as Seventy Acres Lake, backed up by the screeches of nesting Common Terns and the riotous activities of the recently established Black-headed Gull colonies. Little Ringed Plover and Northern Lapwing breed on shallow infilled lagoons, while other breeding birds include Common Pochard, Eurasian Hobby, Common Cuckoo and Common Nightingale. Mid-summer sees waders such as Green Sandpiper begin heading south again on 'autumn' migration, while winter wildfowl such as wigeon and teal arrive from late summer.

Regular watching is a fantastic way to experience these seasonal changes, and also pick up on long-term trends. The past two decades have seen the establishment of Cetti's Warbler, Red Kite and Little Egret on my patch, while the last two or three years have witnessed the vanguard of Western Cattle and Great Egrets, which are still relatively rare but look set to become much more commonplace in the near future. 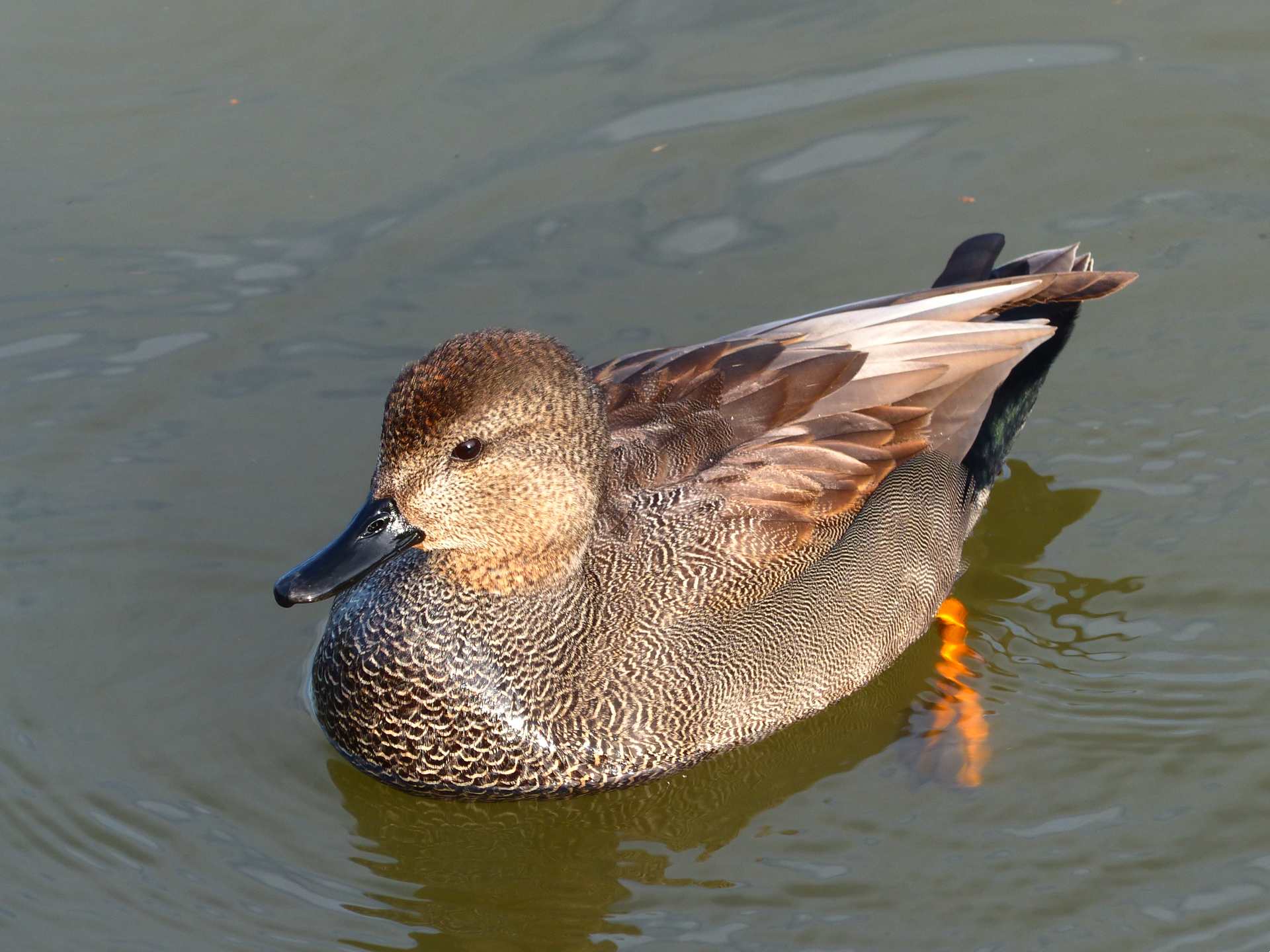 The subtly beautiful Gadwall has benefitted from gravel pit creation. The species can occur in internationally important numbers in the Lee Valley (Simon Papps).

Over the years scarcer visitors to my patch have included Lesser Scaup, Ring-necked and Ferruginous Duck, Green-winged Teal, Red-rumped Swallow, Savi's Warbler and Paddyfield Warblers, White Stork, Red-footed Falcon, White-spotted Bluethroat, Red-backed Shrike, Golden Oriole and Spotted Crake to name just a few – not a bad collection for an unassuming site on the outskirts of London!

These seasonal patterns of bird activity are repeated around the country at hundreds of other gravel-pit complexes. Most of these sites have been created since the end of the First World War. Before then sand and gravel workings were small scale and worked by hand, but the introduction of machinery around this time led to the ramping up of production to an industrial scale, with productivity increasing more than ten-fold from less than 2 million cubic yards per year in 1910 to 25 million cubic yards per year in 1938 as our thirst for concrete accelerated (Wooldridge and Beaver 1950). The process, which is ongoing, has led to the creation of tens of thousands, if not hundreds of thousands, of hectares of artificial wetlands in Britain during the past century.

Several species have benefitted significantly from this process, with Little Ringed Plover among the most obvious. Its colonisation of Britain was linked to freshly dug quarry sites. First breeding at Tring, Hertfordshire, in 1938, today the British population stands at more than 1,200 pairs and its range has extended to encompass much of England and just into Wales and Scotland. Gibbons et al (1993) stated that "gravel pits and quarries accounted for 90.8% of all summer records in 1984". More recently the BTO has remarked that gravel and sand pits are still the species' favoured habitat, but that their relative importance has declined since the 1980s. 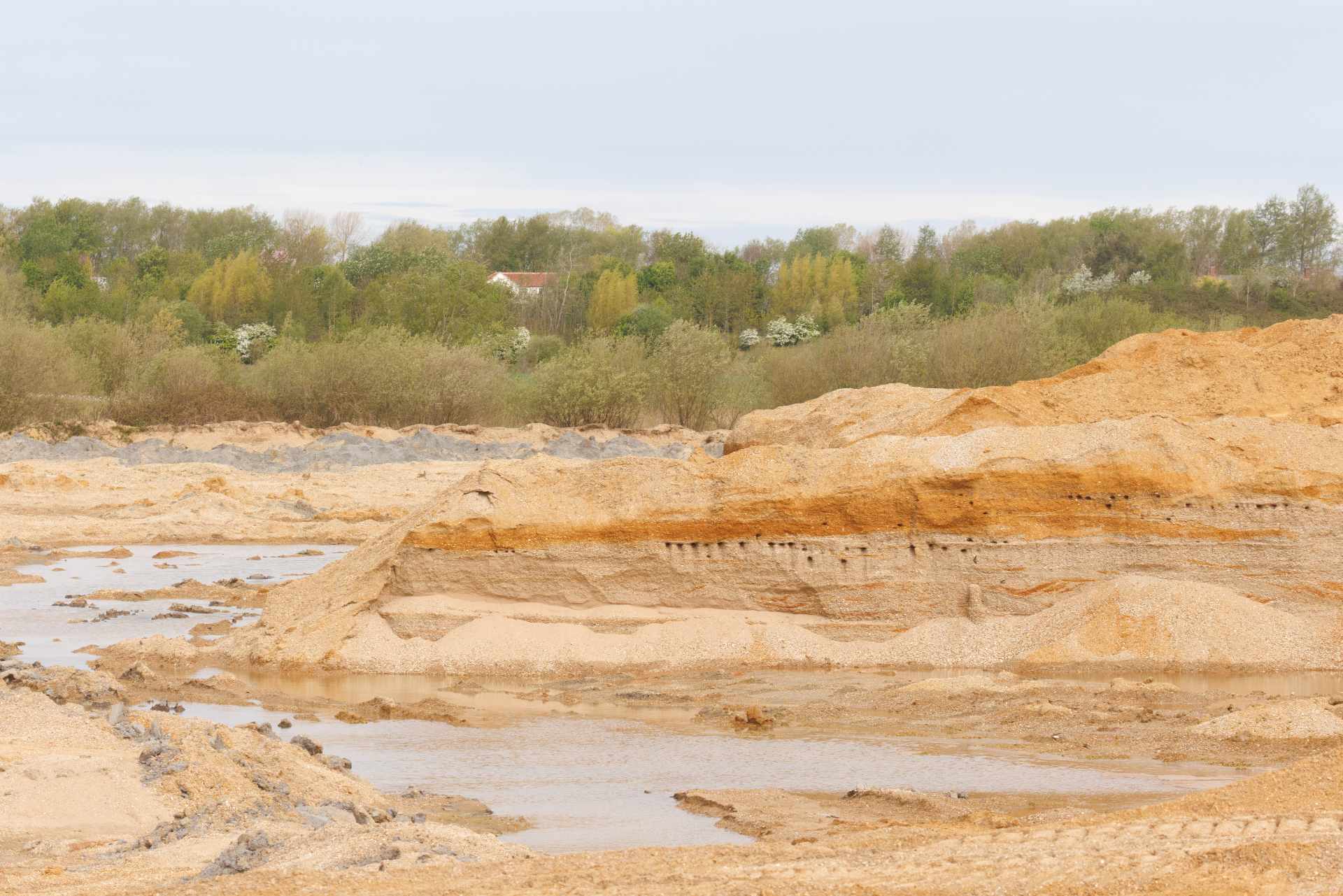 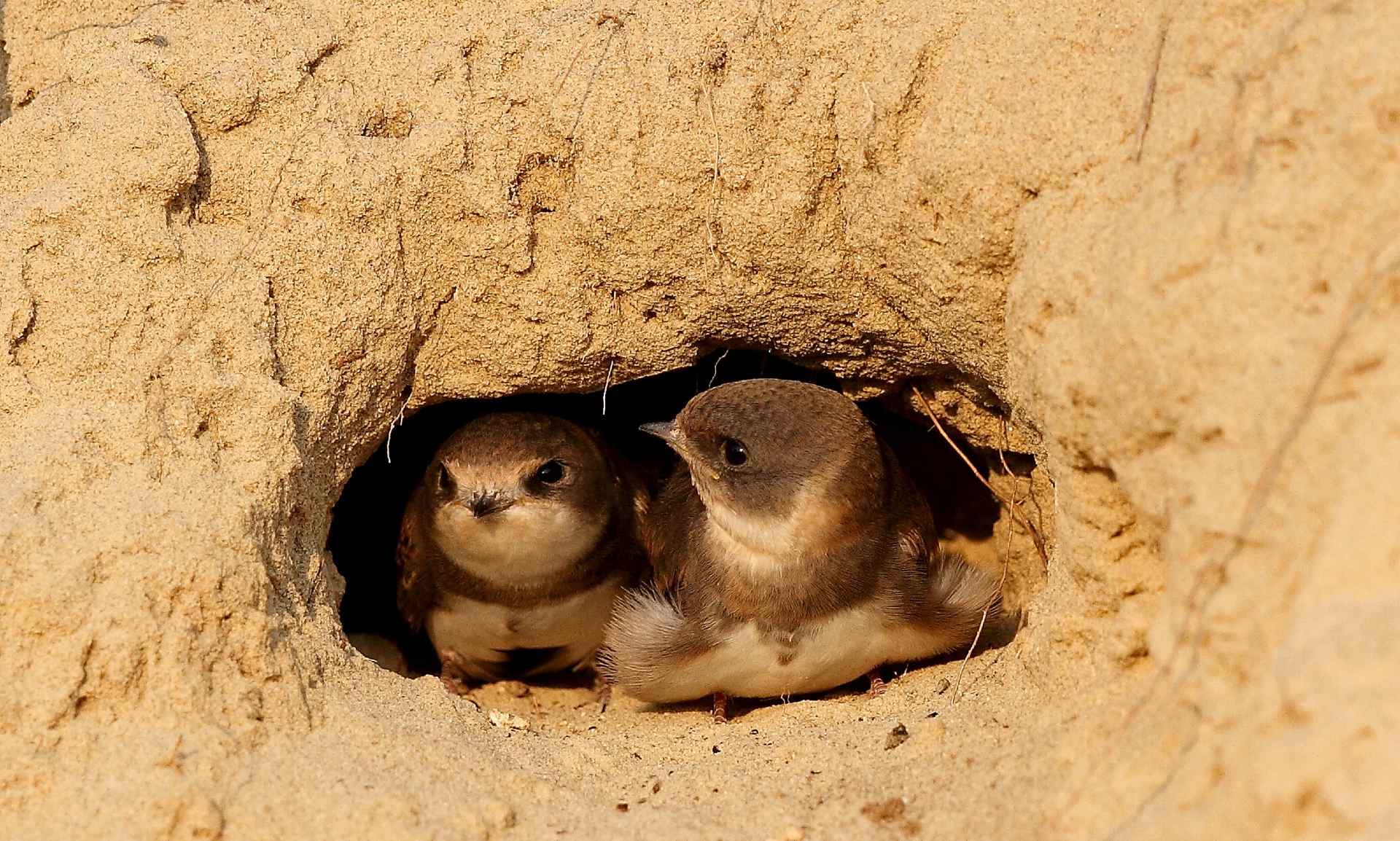 Sand Martin is another bird which has undoubtedly prospered thanks to an increase in potential nest sites. Because of the species' need for sand banks its range is partly restricted by geology, but Gibbons et al noted that sand and gravel quarrying has made many new nest sites available. For example, in central Scotland in 1982 they estimated that 84% of Sand Martin nests were in such habitats.

Waterfowl on the up

Wildfowl are also among the obvious winners. Tufted Duck, unknown as a British breeding bird before 1849, has established a breeding population of 18,000 pairs thanks to a combination of exploiting more mature gravel workings and the simultaneous introduction and spread of the zebra mussel as a key food item (BTO 2022). Similarly, Common Pochard is a surprisingly scarce breeding bird in Britain, but its status has been bolstered thanks to habitats excavated by humans. Gibbons et al noted that it "has colonised gravel pits and reservoirs throughout Britain: indeed, an important population relies entirely on such habitats in the Lee Valley".

Gadwall range expansion has been rapid since the 1950s, with significant increases in numbers of both breeding and wintering birds. Although the evidence does not directly link the population spike to the increase in gravel pits, there must be a chance that the creation of so much excellent Gadwall habitat during this period could be a contributing factor. 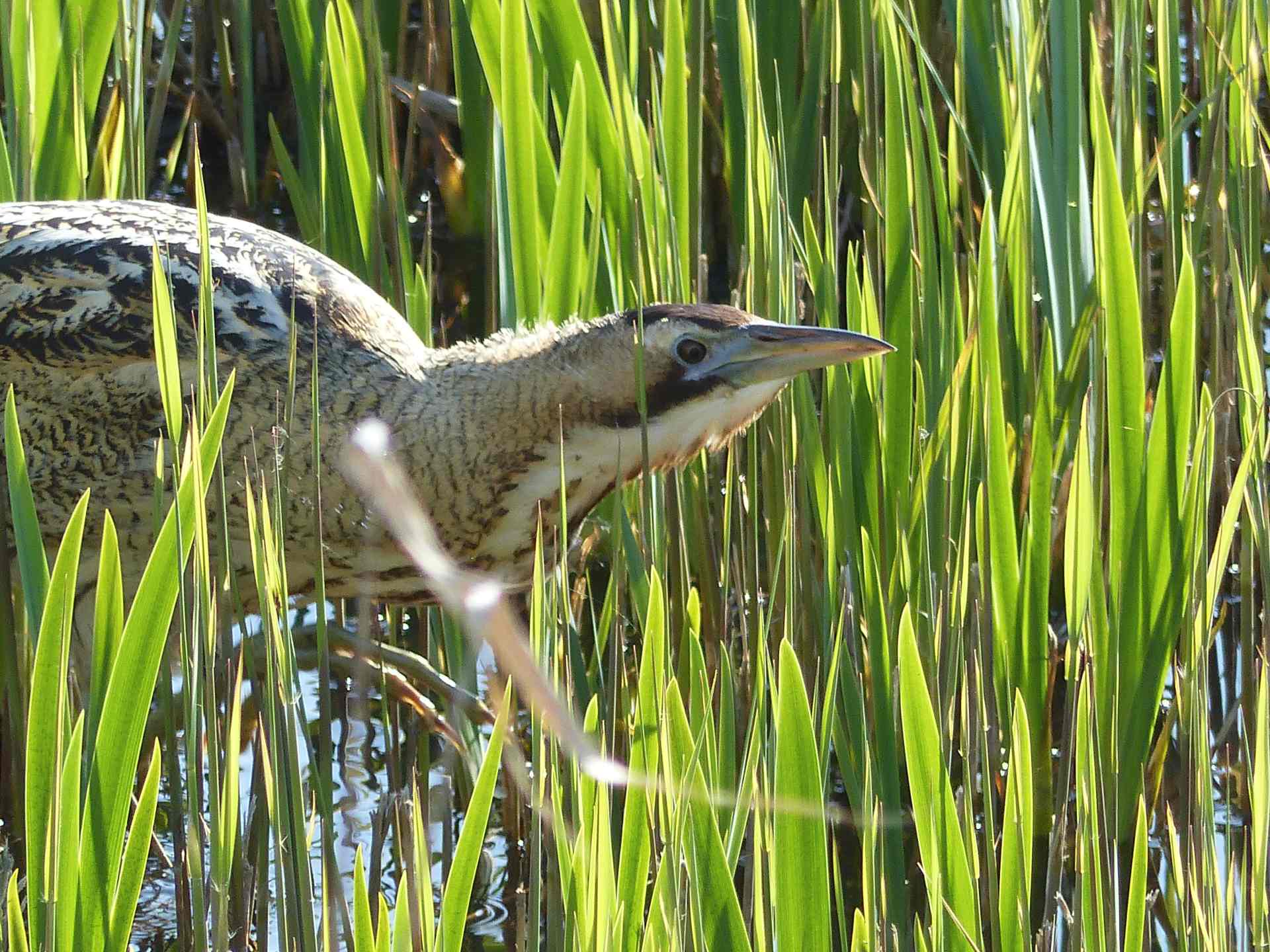 Eurasian Bittern has made use of former gravel extraction sites (Oliver Smart).

Finally, Great Crested Grebe was on the verge of extirpation in Britain around 1860, with perhaps only 30 pairs in England. The BTO points out that the subsequent increase was a result of statutory protection and reduced persecution, plus the creation of extensive new habitat in the form of gravel pits. Today the British population stands at 5,000 pairs, with gravel pits hosting a significant proportion.

The recent trend towards greater offsetting of the adverse effects of industry has seen an increase in the deliberate enhancement of gravel-pit habitats for wildlife. For example, infilling gravel pits and transplanting reeds to create new extensive reedbeds at places such as Dungeness, Kent, and Fen Drayton, Cambridgeshire, have already attracted booming bitterns. Adjacent to the latter is an ambitious partnership between mineral company Hanson and the RSPB at Ouse Fen, aimed at producing 700 ha of wildlife-rich wetland habitat by 2030.

This will be the result of the extraction of 28 million tonnes of sand and gravel from Needingworth Quarry in the three decades from 2001. Already the project is paying dividends with up to 12 booming bitterns in 2021 – more than existed in the whole of Britain in 1997 – plus breeding Western Marsh Harriers, Common Cranes and Bearded Tits. Such ambitious projects have to be good news for wildlife and ensure that countless birders will continue to see the attraction of gravel extraction for years to come.