Gosney in Oman - hear no eagles, see no eagles 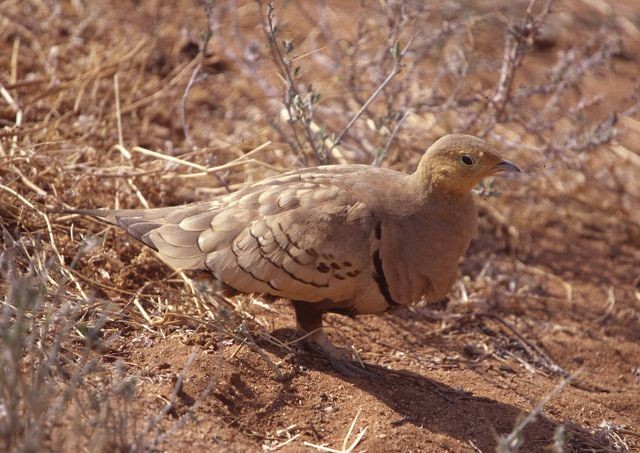 Why Oman? Mainly because there are several species that we haven't yet managed to film, or at least film well, within the Western Palearctic and we thought it might be easier to find them in Oman than to make yet another attempt to film them in Israel, Turkey or Egypt. Birds like White-tailed Lapwing, Striated Bunting (recently split from House Bunting), Isabelline Shrike, Red-tailed Wheatear, Striated Heron, Asian Desert Warbler, Scrub Warbler and Red-wattled Lapwing are all tricky birds to find in the Western Palearctic so we hoped they would be easier here. In addition, there was the exciting possibility of me adding some long-wanted species to my life-list. This would be my chance to get to see species such as Chestnut-bellied Sandgrouse and Crab Plover that have been on my hit-list ever since I first saw them on the pages of the good old Heinzel, Fitter and Parslow.

And why winter? Oman is said to be fantastic during migration times as birds pass between Africa and Asia and summer is best to see a range of special seabirds but winter is the time to come to see the eagles (Spotted, Eastern Imperial and Steppe Eagle), which would be particularly useful for BirdGuides to have better footage of. And besides, I'm a wimp and couldn't face another trip with temperatures constantly above 30 degrees (as it is for the rest of the year). 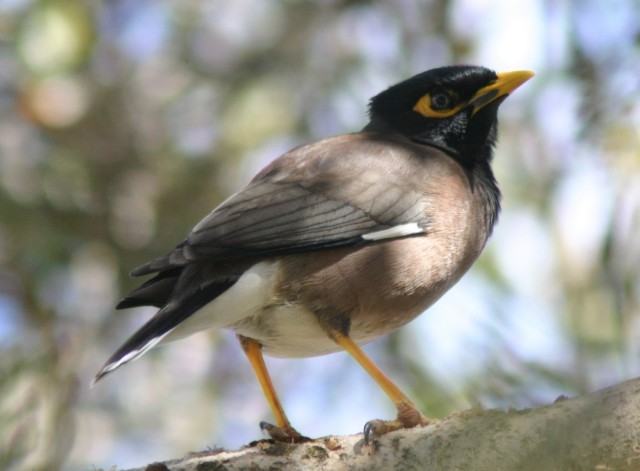 Our first birding was around Muscat itself, starting in the local park next to our hotel. Exotic sounds led us to equally exotic birds. Common Mynah didn't breed in Muscat until the 1980s but now their squawks are heard everywhere, and you can't go far without seeing and hearing other species such as Ring-necked Parakeet, Yellow-vented Bulbul, Indian Silverbill, Purple Sunbird, House Crow, Graceful Warbler and Little Bee-eater. The main birding attraction in the park is a pool in an area of stony wasteground. This unpromising-looking spot yielded lots of 'proper' birds like Isabelline Shrike, Red-wattled Plover, Western Reef Heron and a sprinkling of waders including a few Temminck's Stint and Pacific Golden Plover. We even had two more species of bulbul, White-cheeked and Red-vented, two species that are becoming more widespread in Oman. I was puzzled by the frequent bursts of loud calls, reminiscent of Stone Curlew. At first I assumed they must be a wader - Red-wattled Lapwing perhaps - but then we realized they were coming from partridge-like birds that kept running away from us across the stony areas: Grey Francolin. 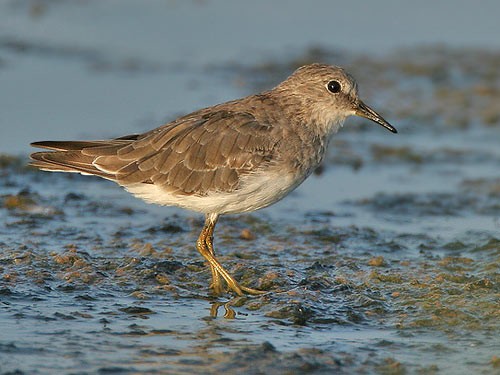 So, despite being just a puddle on a patch of wasteground, Al Qurm Park had lived up to its billing as a great introduction to the birds of Oman. The next site, though, failed to match its reputation. Muscat has been described as 'the eagle capital of the world'. This is due to the large numbers of eagles that are said to winter here, concentrating themselves around the city's rubbish dump at Sunub. Based on past trip reports I was hoping that a visit to the dump would produce up to 100 eagles and a similar number of Egyptian Vultures. We saw none! We asked the gatekeeper where the eagles were and he blamed the recent rain shower - 'try tomorrow'. The next day we only had four Egyptian Vultures, which quickly disappeared. The books said that if the eagles were disturbed they could disappear for hours at a time. So we tried again the next day: still no eagles. It looks as though whatever it was that used to attract the eagles and vultures must have changed. For whatever reason, this is no longer a great place for eagles. The knock-on effect is that other sites nearby such as Al Ansab lagoons no longer get numbers of eagles either (we had one Spotted Eagle there in several visits). This was a major disappointment.

The lagoons at Al Ansab were also a bit of a let-down. This is described in the books as a series of pools, some of which are shallow enough to attract waders, crakes and, significantly, flocks of drinking Chestnut-bellied Sandgrouse. Sadly, it looks as though the best of these pools has been filled in, leaving nothing more than a couple of reedy creeks. These did have some waders, including some highly skittish White-tailed Lapwing, but were more suitable for pipits and wagtails. I filmed some Citrine Wagtails while waiting for crakes one evening (just one unidentifiable glimpse) and had just one sighting of sandgrouse - a party of three Chestnut-bellied which ignored the pools and went down beyond the next hill. I made several more visits, morning and evening, and these were the only sandgrouse I saw here. Maybe I was unlucky, or too engrossed in filming wagtails. Another detrimental change at the site is the amount of new fencing, which means you can no longer walk through to the wadi beyond the pools, nor can you bring a car onto the site because the gates are often closed. This blew my hopes of driving on these tracks after dark in search of Egyptian Nightjar. If you've read about my last Morocco trip, you'll realize that Egyptian Nightjar is becoming a bit of a bogey bird for me. I drove around the roads outside the compound after dark but failed again to get to grips with this species. 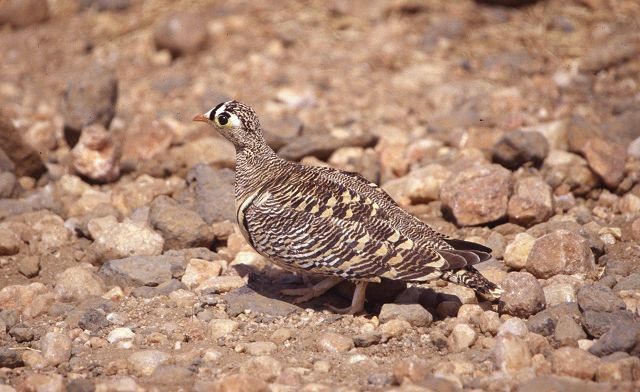 We travelled north, up the coast to the areas around Sohar. There were some magic moments, like finding a Striated Scops Owl roosting in an acacia and seeing a flock of Lichtenstein's Sandgrouse land at the side of a road in broad daylight, but there were also more disappointments. Khawr Sallan, a coastal creek, said to be a great site for Terek Sandpiper and Saunders's Little Tern, was completely dry; the two specialities of the Shinas area, White-collared Kingfisher and the mighty Great Stone Plover, both kept themselves hidden. Maybe they're not there any more? Has anyone seen them in the last few years? Or were we just unlucky?

If this sounds like a catalogue of disappointments, remember that there were plenty of other birds to enjoy. The coasts had flocks of gulls, terns and waders giving great photographic opportunities to film Crested and Lesser Crested Tern, Pallas's Gull, Greater and Lesser Sandplover, Sooty and Caspian Gull. Indian Rollers were everywhere and Desert Lesser Whitethroats, Siberian Chiffchaffs, Grey Francolins and Isabelline Shrikes all kept us busy. Also, although we had expected Sykes's Warbler to be the most difficult species to find in the mangroves we heard plenty of them and did get some reasonable views. We'd also managed to get footage of much-wanted birds such as Hume's Wheatear, Red-tailed Wheatear and Striated Bunting, so there were plenty of successes too. 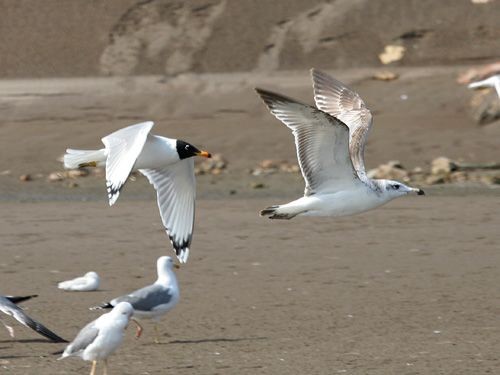 The best site so far was at the famous Sun Farms of Sohar. This is a massive farm area in which the land is irrigated by a series of huge watering arms that traverse the land in circles, making circular patches of green. These provide welcome food, cover and wet patches for larks, pipits and wagtails but, on our visit, only a half of one of the circles was being watered. Hence the best birding was not on the grassy fields but at the small sewage beds by the cow sheds. These had a great selection of waders that we were able to get really close to. Highlights included more Red-wattled Plovers, Temminck's Stints and a White-tailed Lapwing as well as a chance to compare both Whiskered and White-winged Black Tern in winter plumage.

It was while stalking the terns that I noticed a plainer bird amongst some Red-wattled Lapwing. I assumed it was the White-tailed Lapwing but it disappeared behind a clump of vegetation. As I got closer, I began to see the top of its head. It had a 'capped' effect, with the dark cap tapering to a point at the back of the head, as on a Dotterel. Could it be a Sociable Lapwing? Sociable Lapwing is listed in the books as a likely species here but it has declined so dramatically in the last ten years that it is in danger of becoming globally extinct. Hence, I thought my chances of seeing one here were really slim. Even years ago, when they were more numerous, I'd only ever had distant views of them in Israel, so if this was a Sociable Lapwing, it would be remarkable to get good footage of it. I edged closer, filming more and more of its head as it came into view. It noticed me and stepped to one side, away from the vegetation. It WAS a Sociable Lapwing and was standing there, filling the viewfinder, in perfect light, probably the best shot of the trip so far - and of a bird that I thought I may never again get to see, let alone film at such close range.

What birds might we get in the second week of our trip? We'll be checking at least one more rubbish dump for eagles and another sewage pond for Chestnut-bellied Sandgrouse; we'll explore the mountains hoping for a glimpse of Lappet-faced Vulture and we'll be driving to the famous Barr Al Hickmann to find out whether it's possible to see Crab Plover without the aid of a 4-wheel drive vehicle. And there are still loads of special birds that we have yet to capture on film. I'll keep you posted. 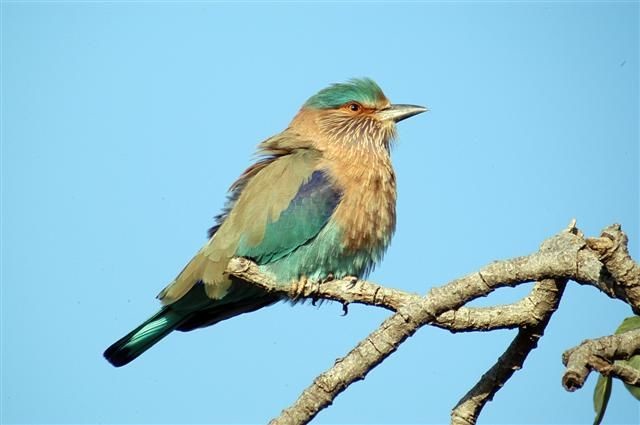