Gone to the dogs

Many members of the public are now at least vaguely aware of the impact that more than 10 million house cats have on British wildlife, and as a result there is a slow but growing acceptance that restricting feline interactions with wildlife is needed to mitigate their predatory habits.

The effect of dog walking on wildlife, though, has received considerably less media interest. Walking a dog is one of the world's most popular recreational activities, with many associated benefits to people and their accompanying canine chums. Dog walking is often the main motivation for many people's visits to natural or seminatural areas and hence their connection with nature, which may itself foster pro-environmental behaviours. However, it seems that most dog walkers fail to recognise the problem and may perceive dog walking as having significantly less impact on natural areas than other activities, despite scientific evidence to the contrary (see, for example, Sterl et al 2008). 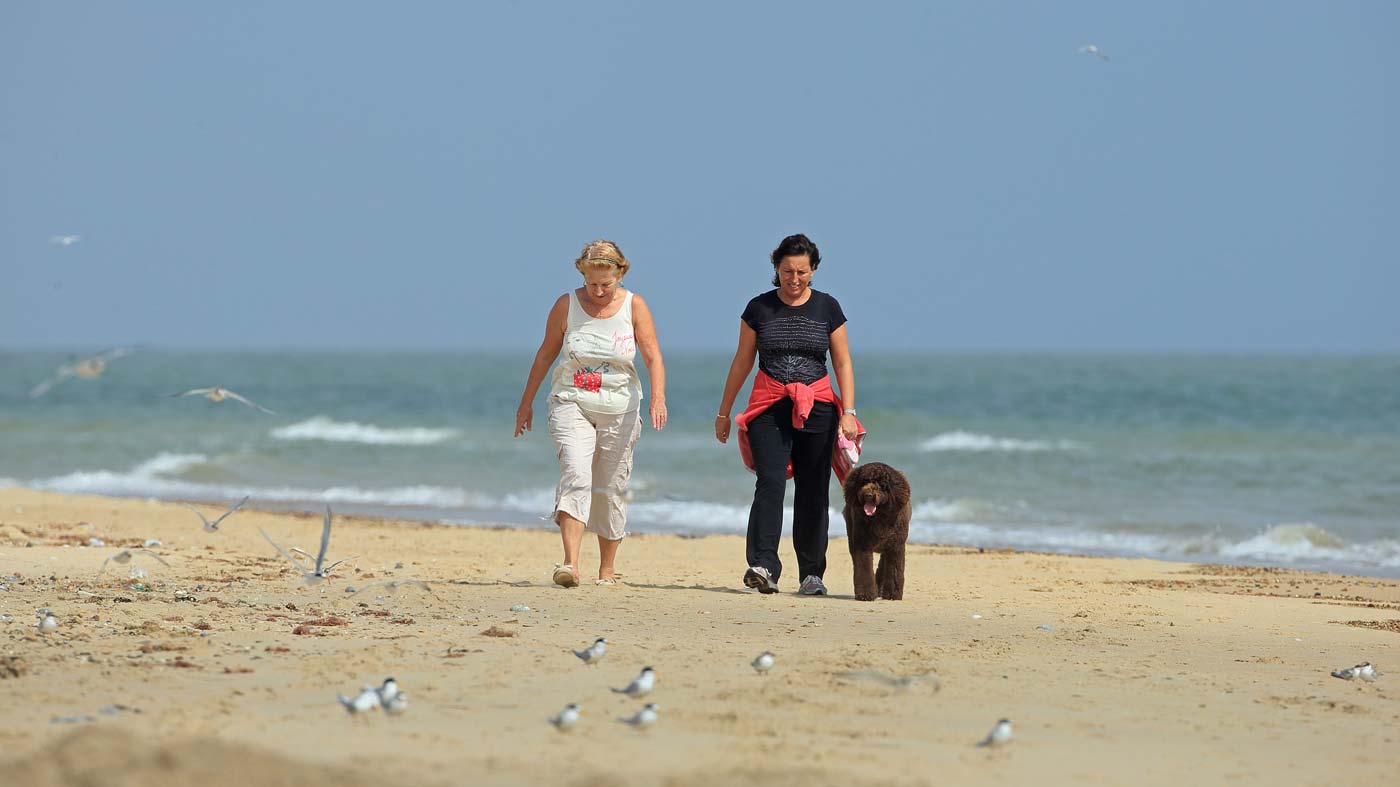 Ground-nesting birds like these Little Terns on a Norfolk beach are particularly sensitive to disturbance; keeping dogs on leads can make all the difference to the colony's survival (Robin Chittenden).

This discrepancy between perceived and actual harm is perhaps largely because such impacts are typically what ecologists term 'sub-lethal': wildlife is in some way harmed but not, in most cases, immediately fatally. Although some dogs do sometimes end up killing wildlife (and livestock), such occasions are, by comparison to the predatory activities of cats, far more limited. Increasingly, however, ecological science is catching up on quantifying canine impacts – something that many reserve managers and birders have recognised for decades.

The COVID-19 pandemic has amplified conflicts between dogs and wildlife. A boom in pet ownership has led to the UK dog population increasing from 10 to 12 million in a single year – this at a time of unprecedented visitor pressure on 'green' and 'blue' spaces. Here I'll explore the impacts that 'owned' rather than 'feral' dogs can have on wildlife and suggest measures to mitigate their impacts.

The response of birds and other wildlife to a threatening stimulus, such as people, dogs or natural predators is called 'disturbance' and results in a change in their normal activities to engage in what are termed 'antipredator behaviours', such as freezing, fleeing or hiding. This leads to the cessation of important activities like foraging, feeding young or resting and is accompanied by physiological changes such as the release of stress hormones and altered heart rates.

These behaviours come at a cost, and while they may not be fatal, repeated disturbance effectively lowers the 'quality' of a habitat and may cause the abandonment of a site, leading to the impoverishment of local biodiversity. Dogs represent year-round agents of near-constant disturbance at many wildlife sites, which can lead to a reduction in local biodiversity. 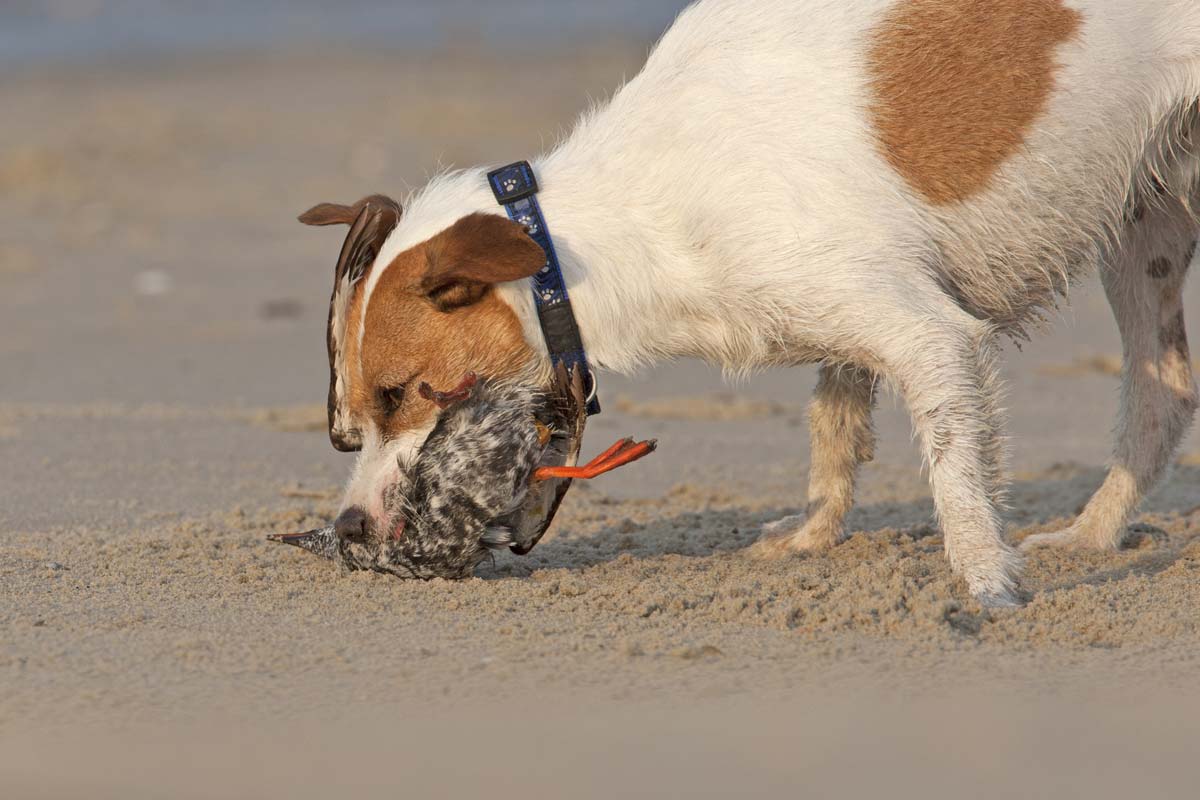 Most of my birding is done in the Longdendale Valley, an area plunged into birding lore in summer 2020 when a celebrity Bearded Vulture spent a month and half with us, even making it onto my garden list. The Longdendale chain of reservoirs is generally barren of waterbirds, but daily coverage does occasionally reveal the odd desperate-looking lost duck or migrant wader, especially when the water is low enough to reveal shorelines.

This marginal space is coveted not only by waders, however, but also by off-lead dogs which continually patrol the shoreline far from the permissive paths, rendering the habitat useless for most species. Common Sandpipers do manage to breed most years – one nest I noticed last year was 30 m back from the water's edge in a huge bank of bramble impenetrable to canine companions. 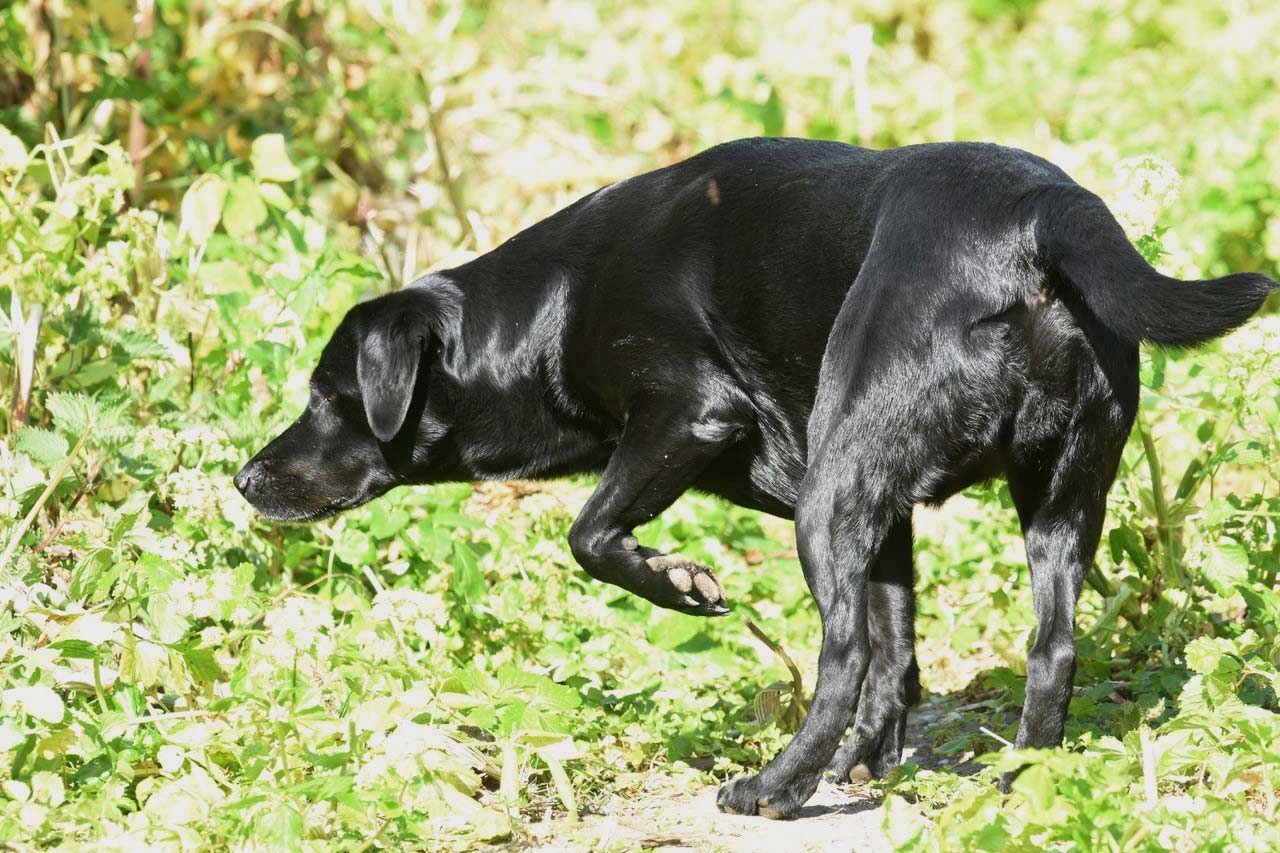 Off-lead dogs can roam much further than those kept on a leash, allowing them to cause more damage and disturbance (Moss Taylor).

My ire at off-lead dogs on my patches is also driven by direct threats to myself. With rather alarming frequency several large dogs have approached me aggressively – invariably when I'm carrying a scope and tripod – and on a couple of occasions I have narrowly escaped being bitten and received a tirade of abuse from owners at having the gall to suggest that they should control their pets. This is on top of the not inconsequential noise pollution from scores of dogs barking and owners shouting uselessly as their charges  disappear off into the reservoirs or adjacent undergrowth.

Beyond my patch I have even been bitten by an on-lead dog in Manchester while birding. Another consequence of the pandemic has been an increase in dog attacks – likely the product of increased sensitisation of dogs to unfamiliar people during coronavirus isolation and a raft of new owners without the knowledge or inclination to train their dogs. I'd imagine many birders, dog owners or not, have had similarly bitter experiences.

Disturbance from off-lead dogs greatly exceeds that of dogs kept on leads and to heal – simply because of the area roamed. People tend to keep to footpaths, while their dogs are often afforded free rein to cover much more ground, not only passively disturbing wildlife, but also actively chasing it.

This is a particular problem in blue spaces like the aforementioned reservoirs, but also on the coast. Humans and their dogs covert sandy beaches like no other British habitat, places which are also important feeding and resting areas for birds. Disturbance is a major problem at many UK beaches and estuaries, effectively rendering them useless to birds. Unlike lone humans, who are usually a 'benign' stimulus that many birds grow accustomed to, dogs will often actively chase birds on beaches – so wildlife cannot habituate to them in the same way as to people. In stark contrast to the habituation that birds can show in areas where they aren't persecuted, chasing by dogs leads to 'sensitisation' to dogs and heightened responses.

It isn't just dogs off leashes that cause disturbance. The very sight of a dog is a stimulus that can evoke strong responses from wildlife given the long evolutionary relationship between canids and their prey. An Australian study found that dog walking in woodland can lead to a 35% reduction in bird diversity and a 41% reduction in abundance (Banks et al 2007). This illustrates that even leashed dogs can have detrimental impacts on local bird communities.

A study comparing the reactions of Eurasian Stone-curlews in southern Britain to three different disturbance types – vehicle, person and person with a dog – found that the third elicited the most extreme responses, at ranges of up to 500 m (Taylor et al 2007). As a result, reserve managers sometimes either ban dogs from reserves, or more commonly mandate that they be kept on leads. Dog bans or leashing mandates are policy interventions that can cause considerable friction with local people, who don't like their freedoms curtailed – rarely a week goes by without me seeing friends posting experiences of rule-breaking dog walkers at reserves on social media. 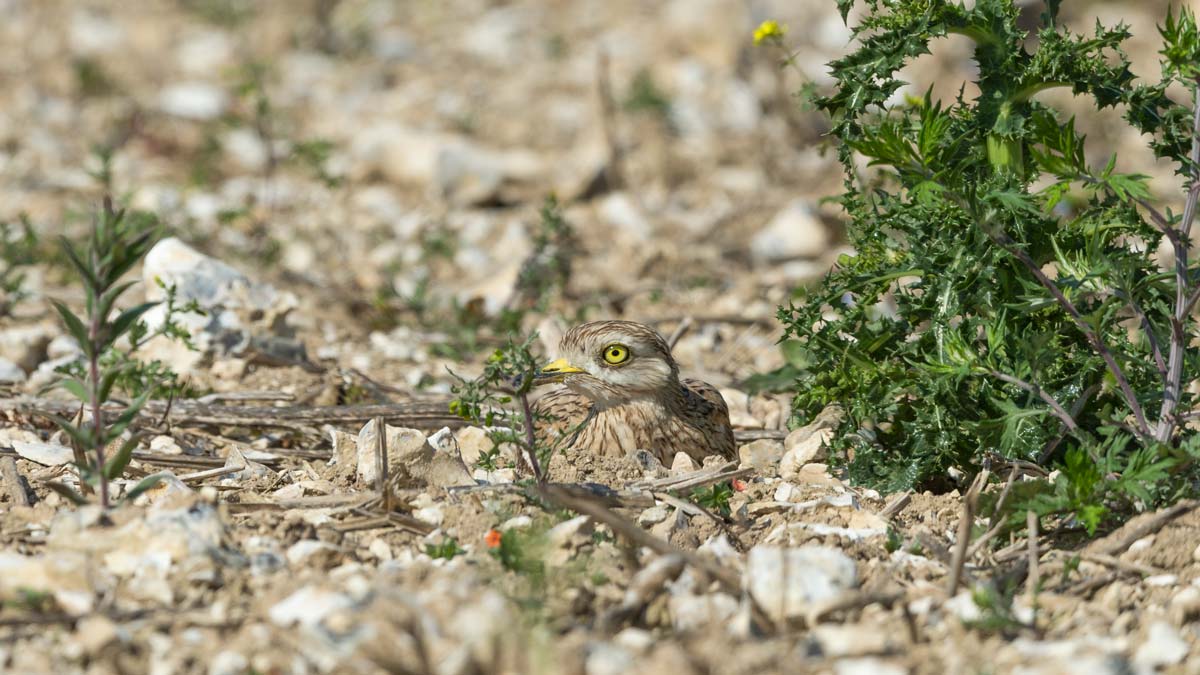 A study of Eurasian Stone-curlew showed that the species reacts more strongly to people with dogs than either people alone or vehicles (Oliver Smart / www.smartimages.co.uk).

In parts of the country where there are few safe spaces, in particular for coastal, heathland and wetland wildlife, more needs to be done to either enforce the use of leads or create areas entirely free of disturbance. For some species, like Western Capercaillie and Woodlark, disturbance from people and dogs represents some of the most important threats to their existence. In an age where many of us clamour for more countryside access, we should also seek to ensure that there are core safe spaces where wildlife is protected from any form of human-mediated disturbance.

The Holkham Estate in north Norfolk instigated a 'Dog Zoning Initiative' pilot scheme in 2021 with a traffic-light system of zones designated as 'No dogs', 'Dogs on leads April to August', and 'Dogs off leads' on the beach and foreshore, especially to protect nesting birds such as Little Terns. Wider roll-out of such schemes is needed to create more safe spaces for wildlife – and for people who are not appreciative of a stranger's dog jumping all over them. This is something that I tolerate as a former dog owner, but which fills many others with dread. 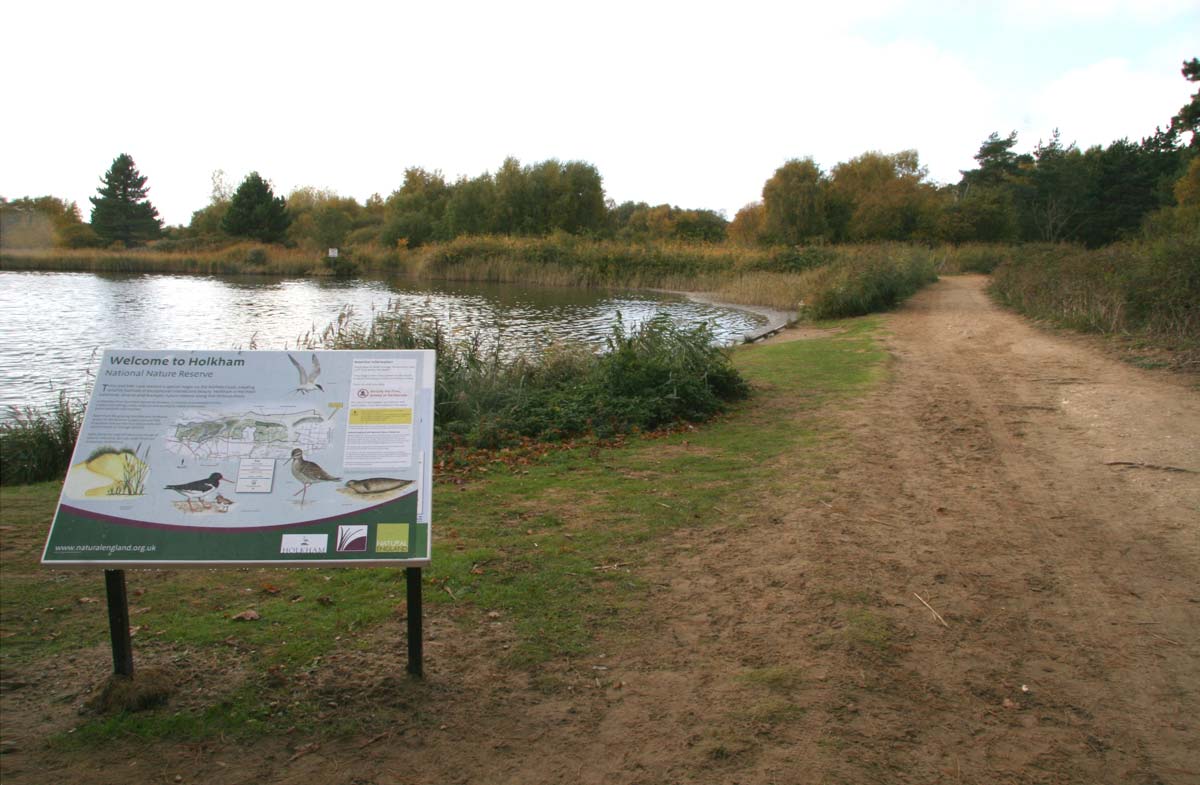 The Holkham Estate in Norfolk has introduced a traffic-light system letting dog owners know where and when they can let their pets off the lead (Jim Almond).

Dog-owning birders should lead by example at any sites with wildlife value and talk to other dog walkers about impacts. In my experience such conversations from within 'peer groups' can be more likely to engender change in behaviour than those coming from non-dog owners. Still, challenging reckless behaviour should be an option open to all, and not just at sites where management has already requested that dogs be kept on leads.

A critical mass of conversations and outreach is most likely to see change take place and for significant wildlife disturbance to be viewed as socially unacceptable as leaving dog excrement for others to step in. Change can happen very quickly – it just needs champions to push it forward. Dr Alexander Lees is a Senior Lecturer in biodiversity at Manchester Metropolitan University and a life-long ornithologist. Follow him on Twitter: @Alexander_Lees