There can be few more attractive sights than the 'golden plovers' in summer plumage. With their black faces and bellies and gold-spangled upperparts, they are an arresting sight. However, as well as being objects of beauty, they also present some identification problems, and further difficulties arise with the more plainly marked juveniles. This article discusses the identification of all three species: European, American and Pacific Golden Plovers. 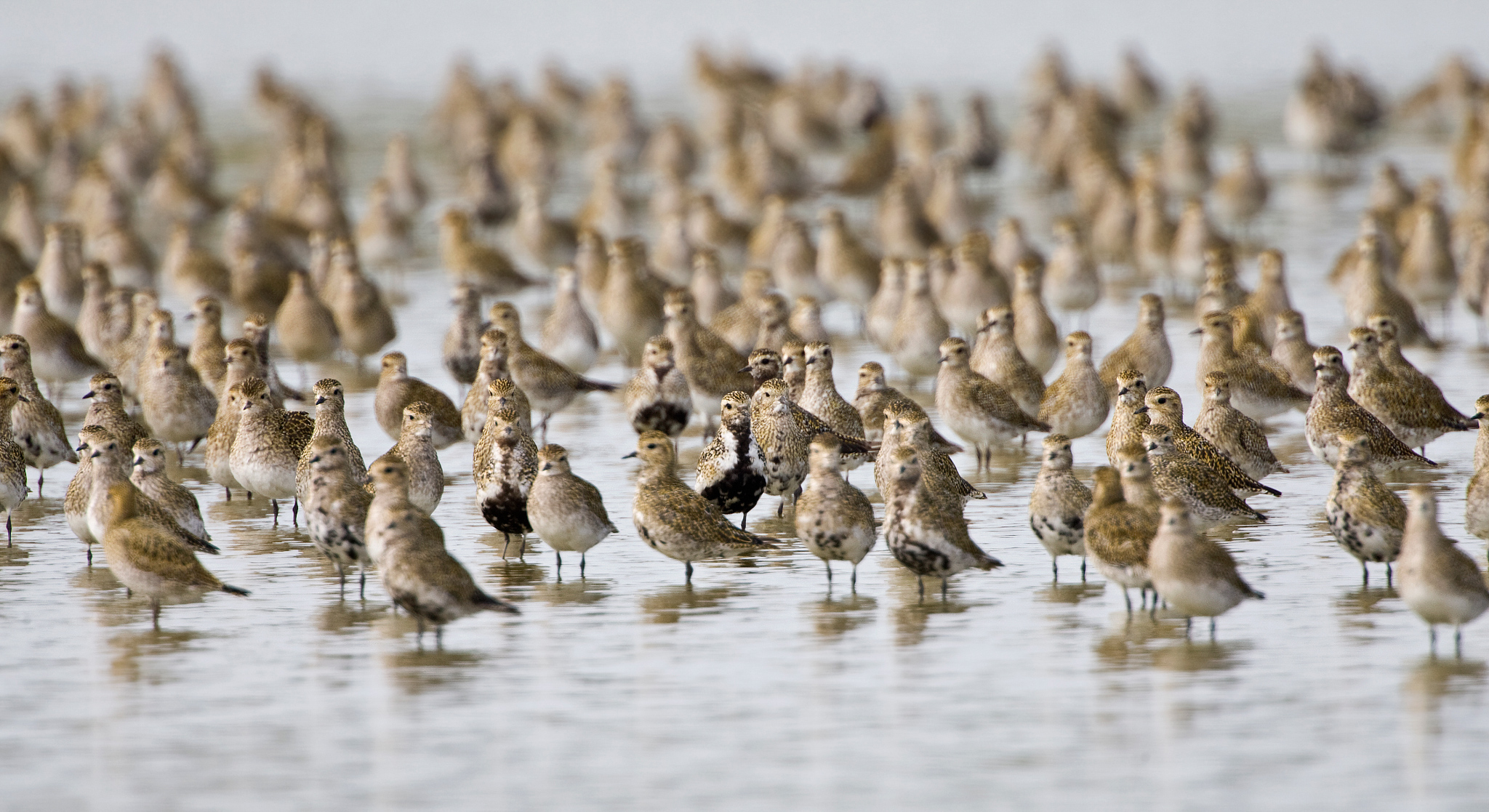 This species breeds from Iceland in the west to Siberia in the east and winters in western and southern Europe and North Africa. It is a scarce upland breeder in Britain, but is much more familiar as a winter visitor to fields and wetlands, typically in large flocks which can number up to several thousand individuals. In the air these flocks often adopt a distinctive laterally elongated or 'rugby ball-shaped' appearance.

Structure is an important identification feature of this trio of plovers, with European being the most distinctive of the three. This species is typically very fat and dumpy, a little short at the rear-end, a little short legged, rather short necked and quite short billed. In flight, although a powerful flyer on long, pointed wings, the body still appears quite fat.

In summer plumage this is a striking species: the upperparts are spangled with pale gold, separated by a white line from the black face and foreneck. The flanks and undertail coverts are also white. In southern breeders, the black areas are paler and duller and there is also sexual variation, the males being more black below than the females. Juveniles and winter adults are very similar. Both lack the black underparts and are spangled light gold colour all over, appearing relatively uniform at range. This rather featureless impression is reinforced by a plain face with an isolated dark eye.

At all ages, the underwing coverts and axillaries are bright white, easily seen in flight and often displayed prominently on landing.

The call is the characteristic mournful, piping piooooo.

With a breeding range extending across Alaska and northernmost Canada and a winter range in Argentina and Uruguay, this is one of the world's great wader migrants. Its long autumn passage takes it out over the western Atlantic so it is, unsurprisingly, a regular rarity in Britain. The majority of records involve juveniles in September and October, but most years also see a few records of summer-plumage adults, typically in July and August.

American Golden Plover forms a species pair with Pacific Golden Plover, resembling the latter much more than its European relative. Indeed until recently both were treated together as 'Lesser Golden Plover'. Today, however, their distinctive structural, vocal and plumage features are better understood.

American Golden Plover is, compared to European, a smaller, more slender-bodied species, with longer legs, neck and wings and proportionally a slightly longer and stouter bill. The strutural differences can be hard to evaluate on a 'fluffed up' bird, but when alert this is a strikingly slim, elegant species which should stand out among European Golden Plovers on this feature alone.

These structural features are, however, shared with Pacific Golden Plover so, to eliminate that species, it is necessary to focus on the rear of the bird. In American Golden, the tertials are quite short, falling short of the tail-tip, while the primary projection beyond both is quite long, with at least four primary tips visible.

Adult male American Golden Plovers in summer plumage are even more dramatically marked than European birds. The upperparts are spangled very bright gold. The face and the whole of the underparts (including the flanks and undertail coverts) are solidly black and the white lateral line is broad, bulging at the breast-sides and almost meeting across the centre. Note, however, that females, first-summer birds and birds in body moult will all show a paler and more disrupted pattern.

Juveniles are a characteristic grey colour, indeed they are as likely to be mistaken for a Grey Plover as a European Golden. The mantle is a little darker and there are some subtle gold hues in the wing coverts. The face pattern is well-marked with a prominent supercilium, dark crown and ear covert and loral patches, the effect almost resembling a phalarope.

At all ages the underwing coverts and axillaries of American Golden Plover are a uniform mid-grey. The call is very different from European Golden, too, a disyllabic chew-ee, generally with the stress on the first syllable.

This species breeds across northern Siberia to western Alaska. It is also a spectacular migrant, wintering in south and south-east Asia, Australasia and the Pacific islands. It is a regular rarity in Britain, though rarer than its American cousin. Records typically involve summer-plumaged adults in July and August, with juveniles surprisingly rare here.

Structurally, this species closely resembles American Golden Plover and is best distinguished by looking at the rear-end. The tertials in Pacific Golden Plover are long, the same length as the tail-tip. As a result, the primary projection beyond both is quite short, with only two or three primary tips visible.

Summer Pacific Golden Plovers closely resemble Americans, but the breast-side patches are a little less broad and they typically show a white flank line (with a little black barring) separating the black underparts and gold upperparts. The undertail coverts often show some white. Note, however, that the flank line can be hidden under the closed wing (and beware moulting Americans which can occasionally appear to show such a line).

Juveniles are quite different from Americans, lacking the latter's distinctive grey hues. Instead they are bright golden and therefore closely resemble European Golden Plover. They are best distinguished from this species by size and structure, but the face pattern is also a little stronger.

At all ages the underwing coverts and axillaries of Pacific Golden Plover are the same mid-grey as American, while the call is a disyllabic chew-it, resembling that of Spotted Redshank. 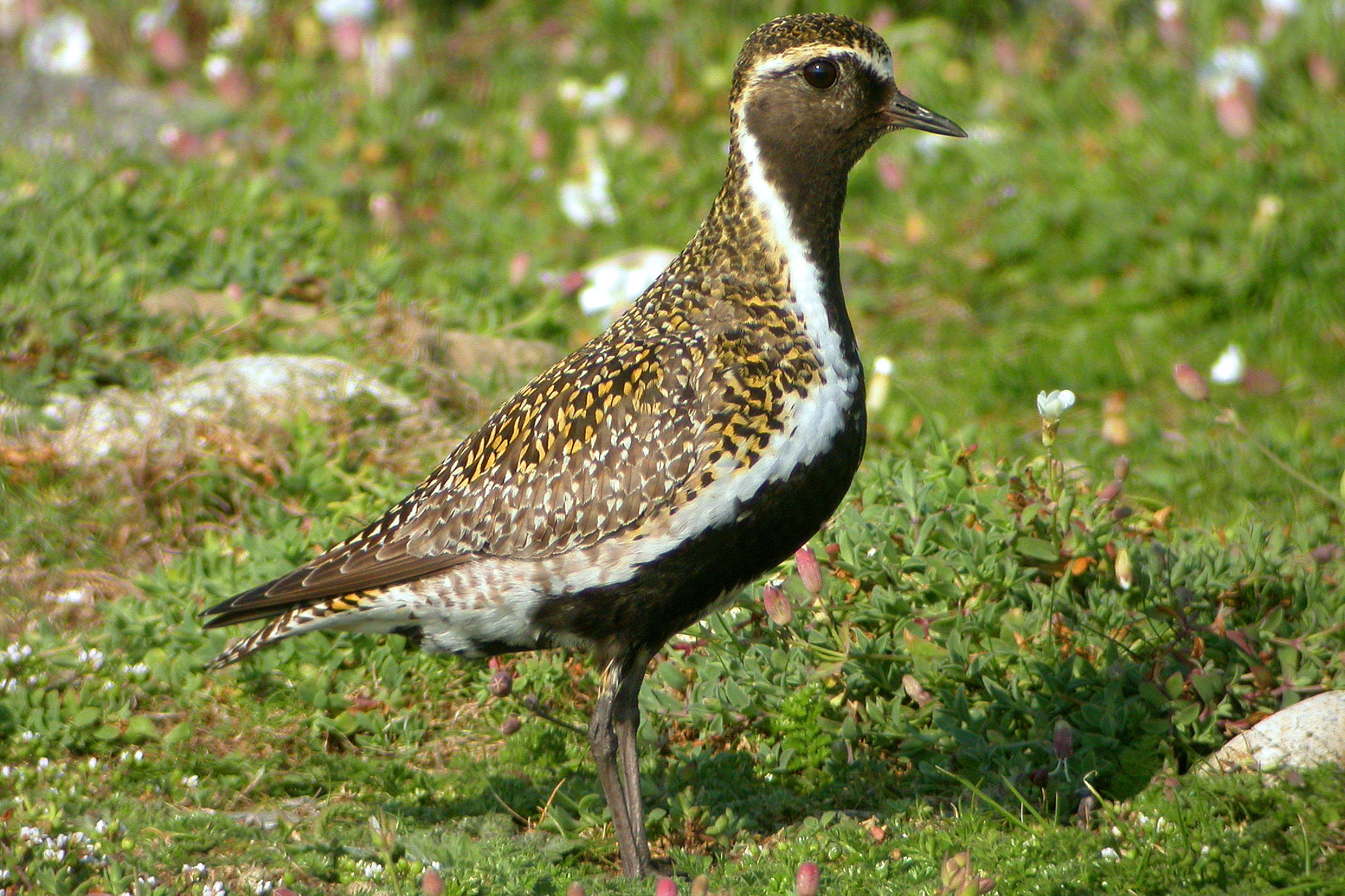 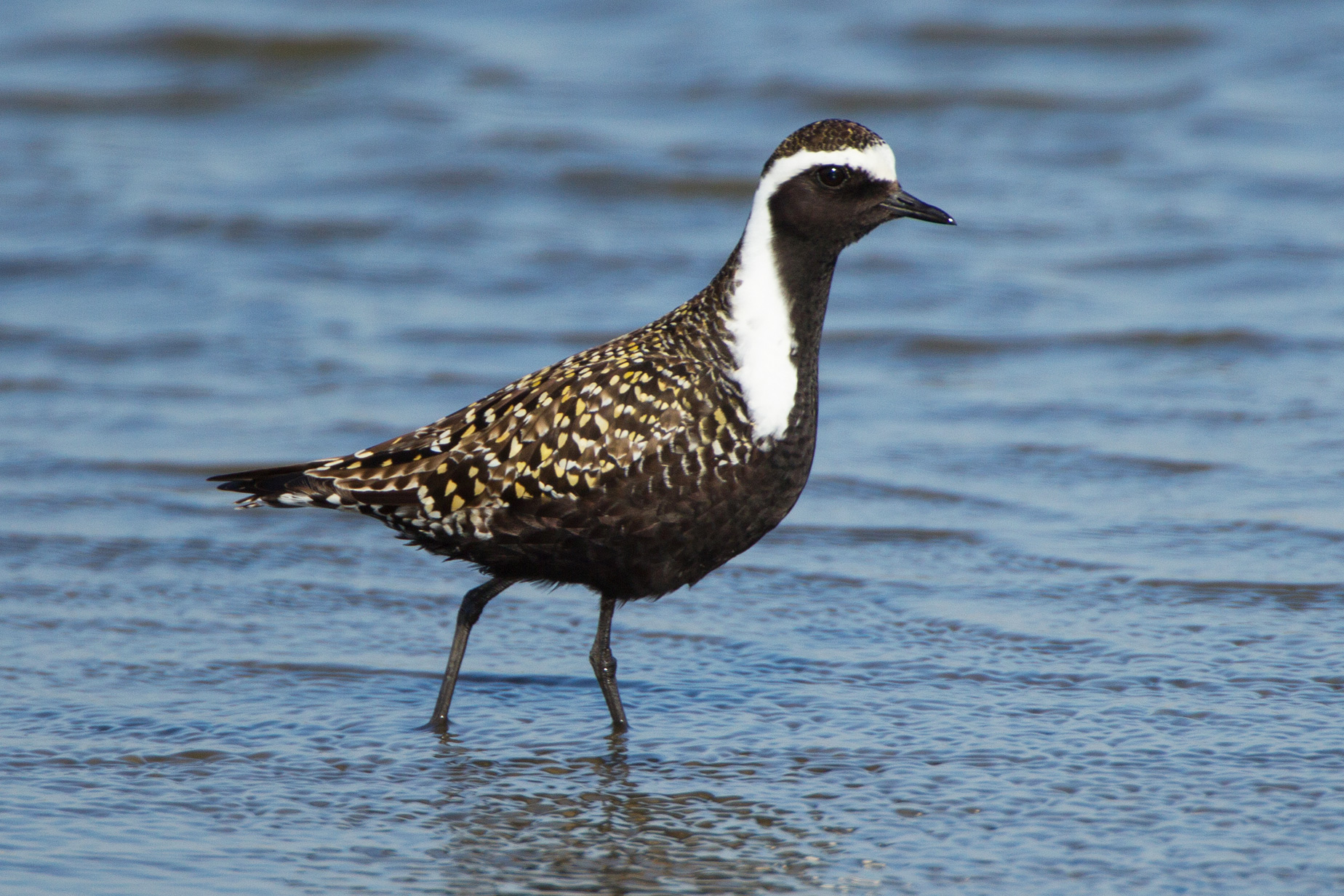 Adult American Golden Plover (De Putten, The Netherlands, 5 June 2013). This bird also shows a rather slender body and rear-end and, although it is wading in water, its exposed tibia are quite long. It is therefore either a Pacific Golden or an American Golden Plover and its identity as the latter can be confirmed by its broad white neck-side patches and solidly black flanks. The short tertials can be seen clearly, as can the relatively long projection of the primaries beyond the tail-tip (Chris Galvin). 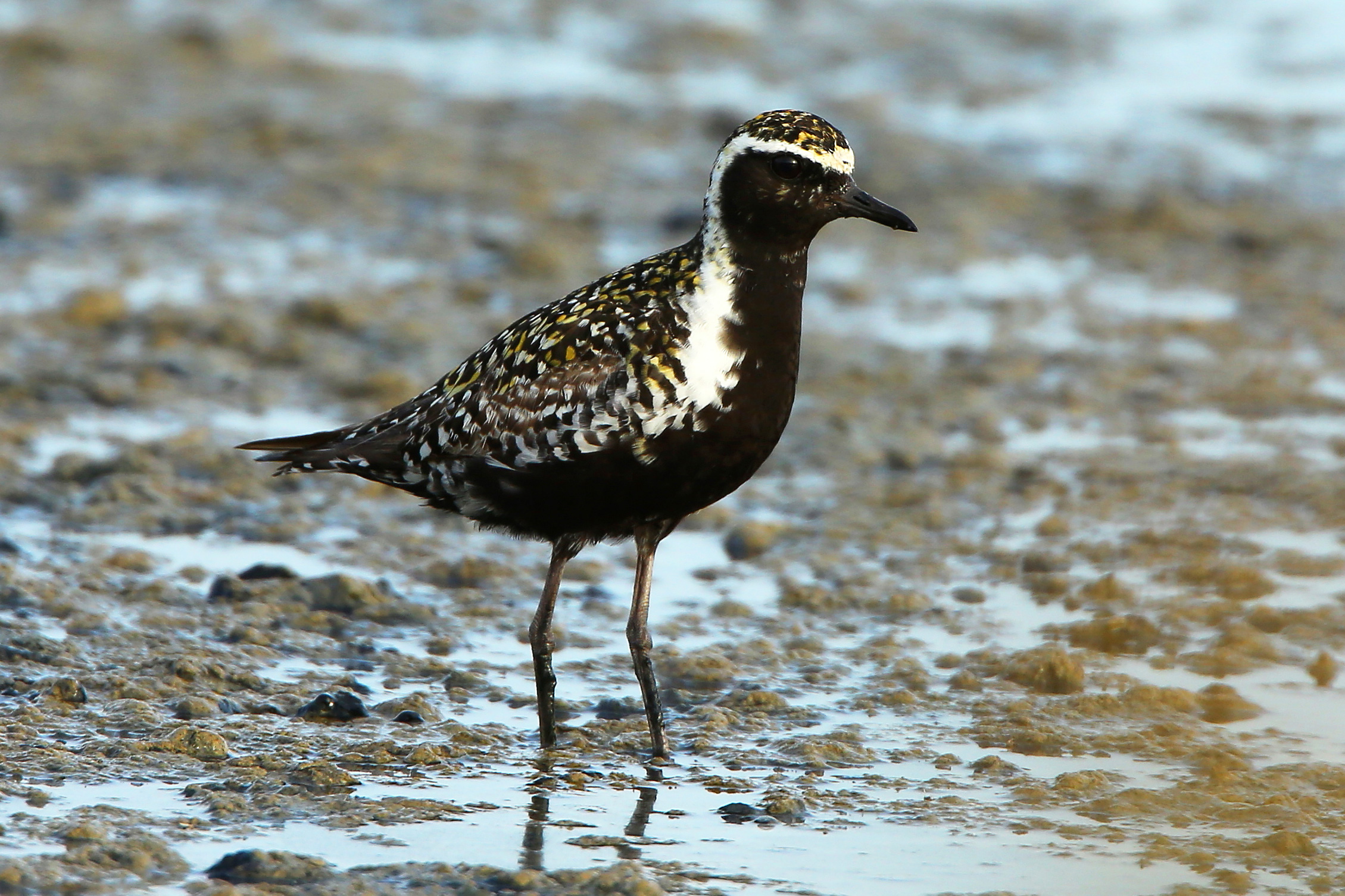 Adult Pacific Golden Plover (Hyères, France, 22 July 2016). This golden plover has a rather prominent bill. Its body also looks slender, with a long rear-end and the legs – again especially the exposed tibia – are long, too. These are all classic features of the two smaller species. This bird can be identified as a Pacific Golden Plover by its relatively narrow white breast-side patches and the presence of a white flank line barred with black. The primary/tertials/tail-tip ratios are, however, difficult to interpret in this photograph (Aurélien Audevard). 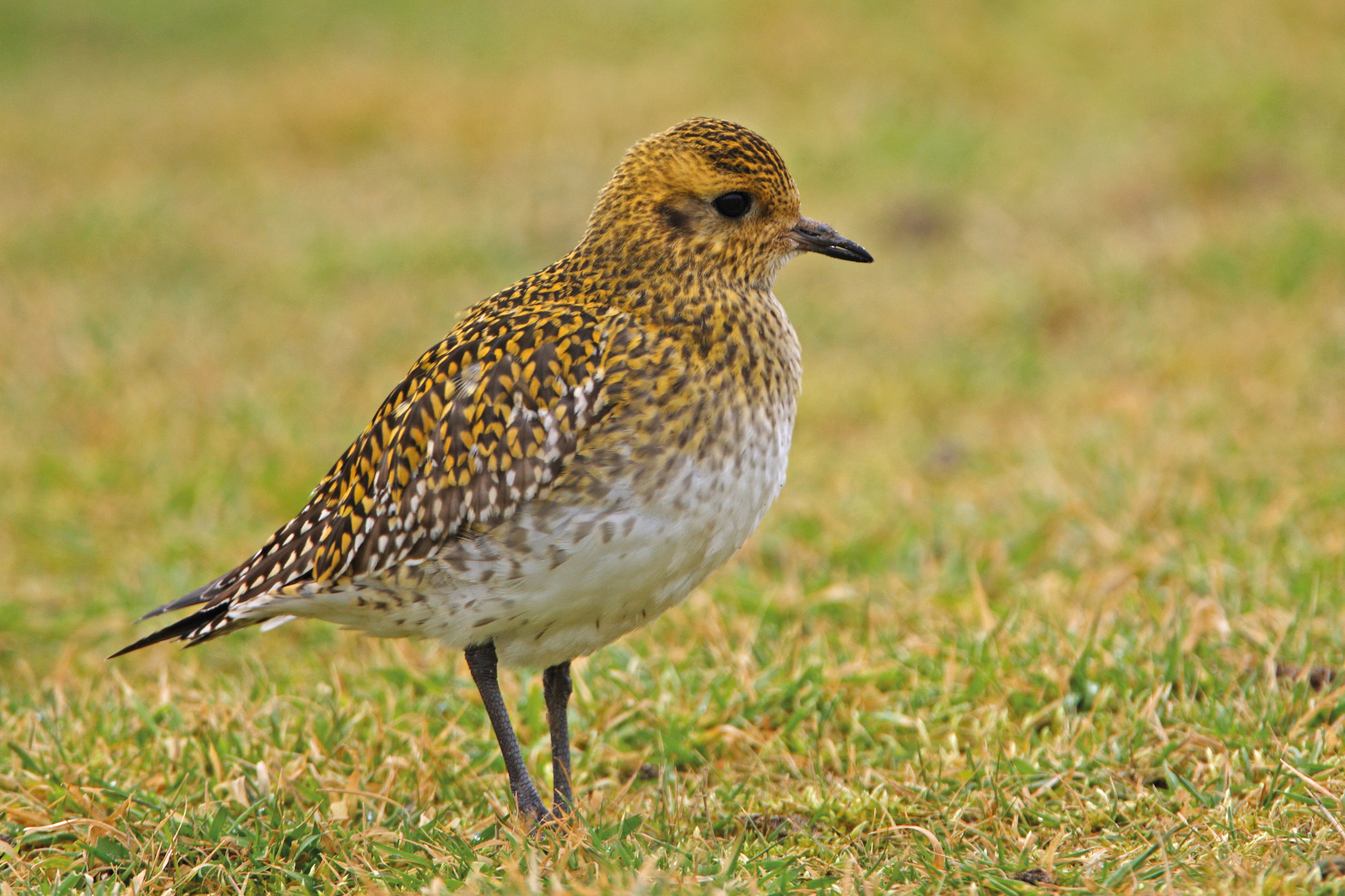 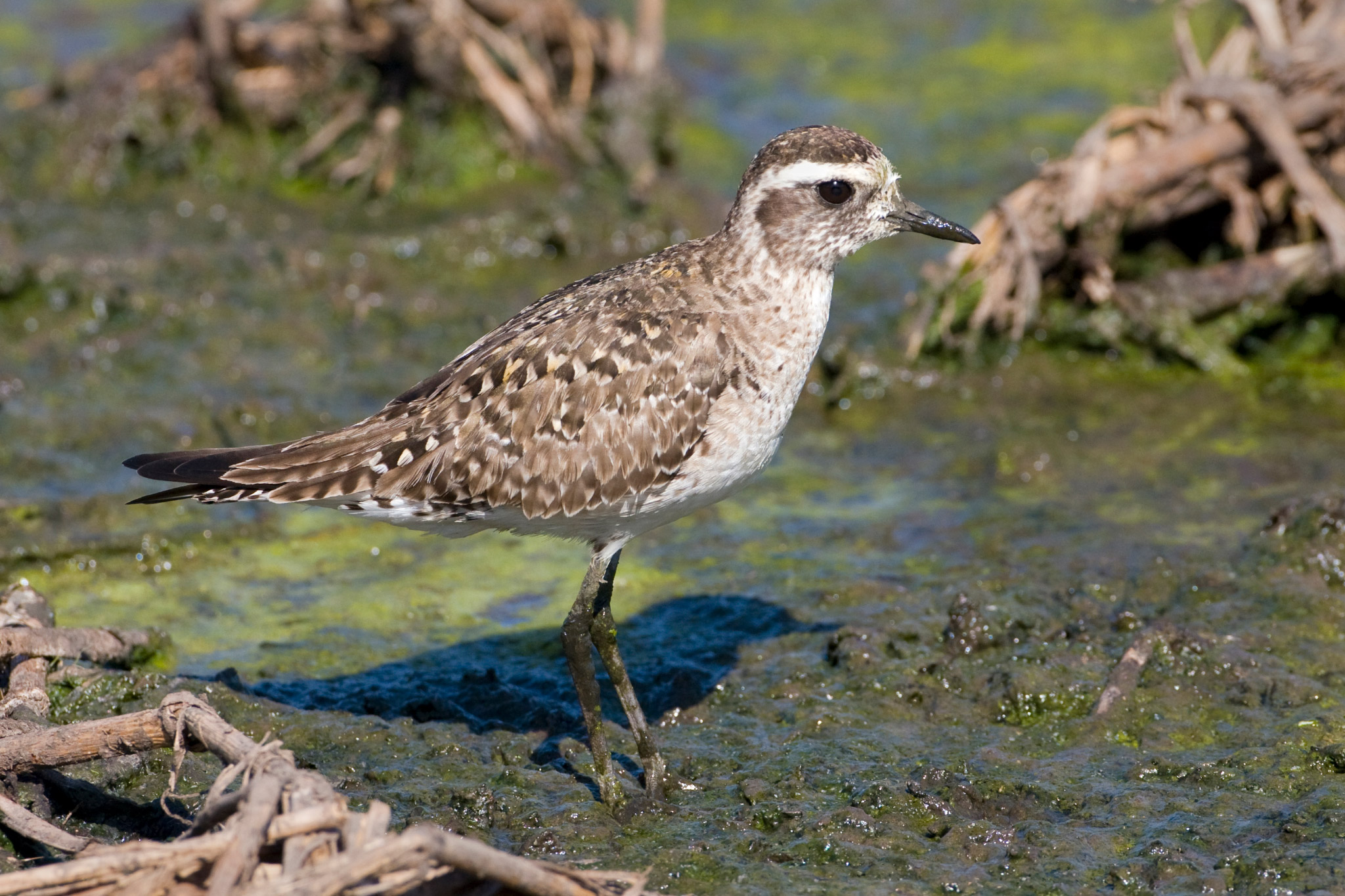 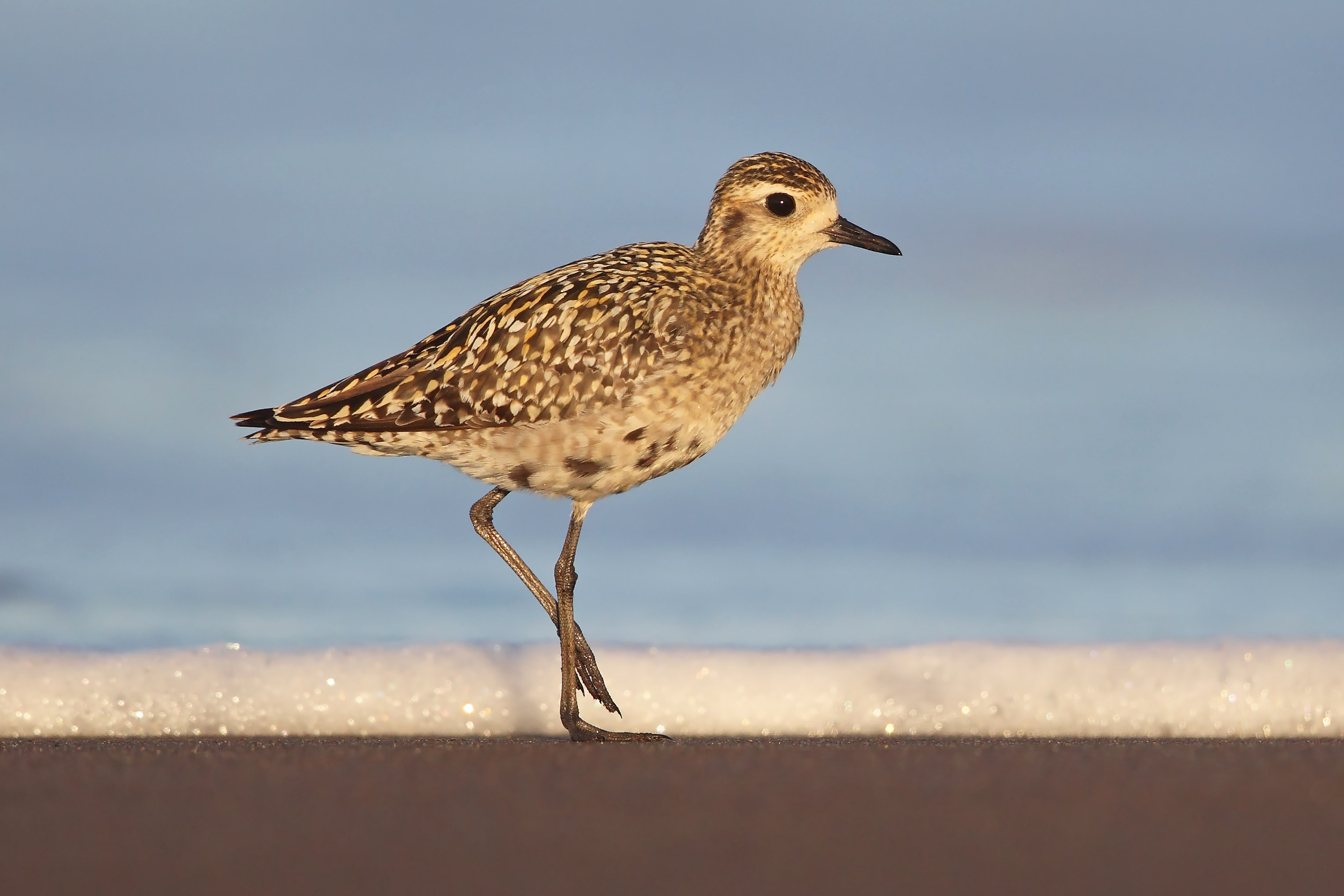 Adult Pacific Golden Plover (Kauai, Hawaii, 29 August 2016). This bird's lanky proportions, prominent bill and long legs indicate one of the two 'lesser' golden plovers. Its identity as a Pacific can be confirmed by the golden hues in its upperparts and by the crucial structural relationships at the rear-end. Note the relatively long tertials, almost reaching the tail-tip, and the relatively short primary projection beyond (Jonathan Lethbridge / www.justbirdphotos.com). 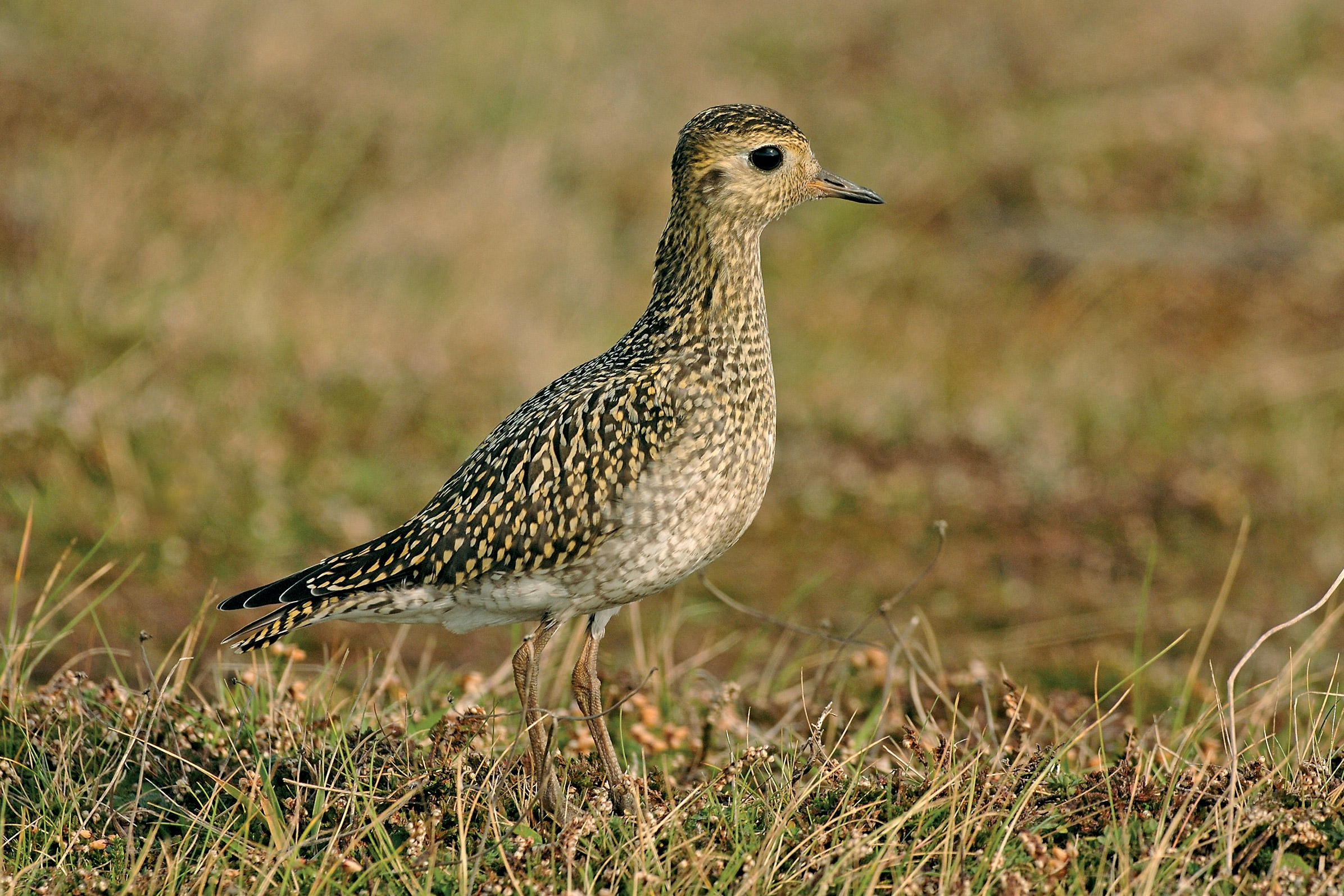 Juvenile European Golden Plover (St Mary's, Scilly, 5 October 2005). This bird looks superficially rather slender with a long neck. Could it be one of the two smaller golden plovers? However, it is stretching up, exaggerating its neck length, the exposed tibia are noticeably short and the bill is quite short and fine, too. It is in fact a juvenile European Golden Plover (Steve Young / www.birdsonfilm.com). 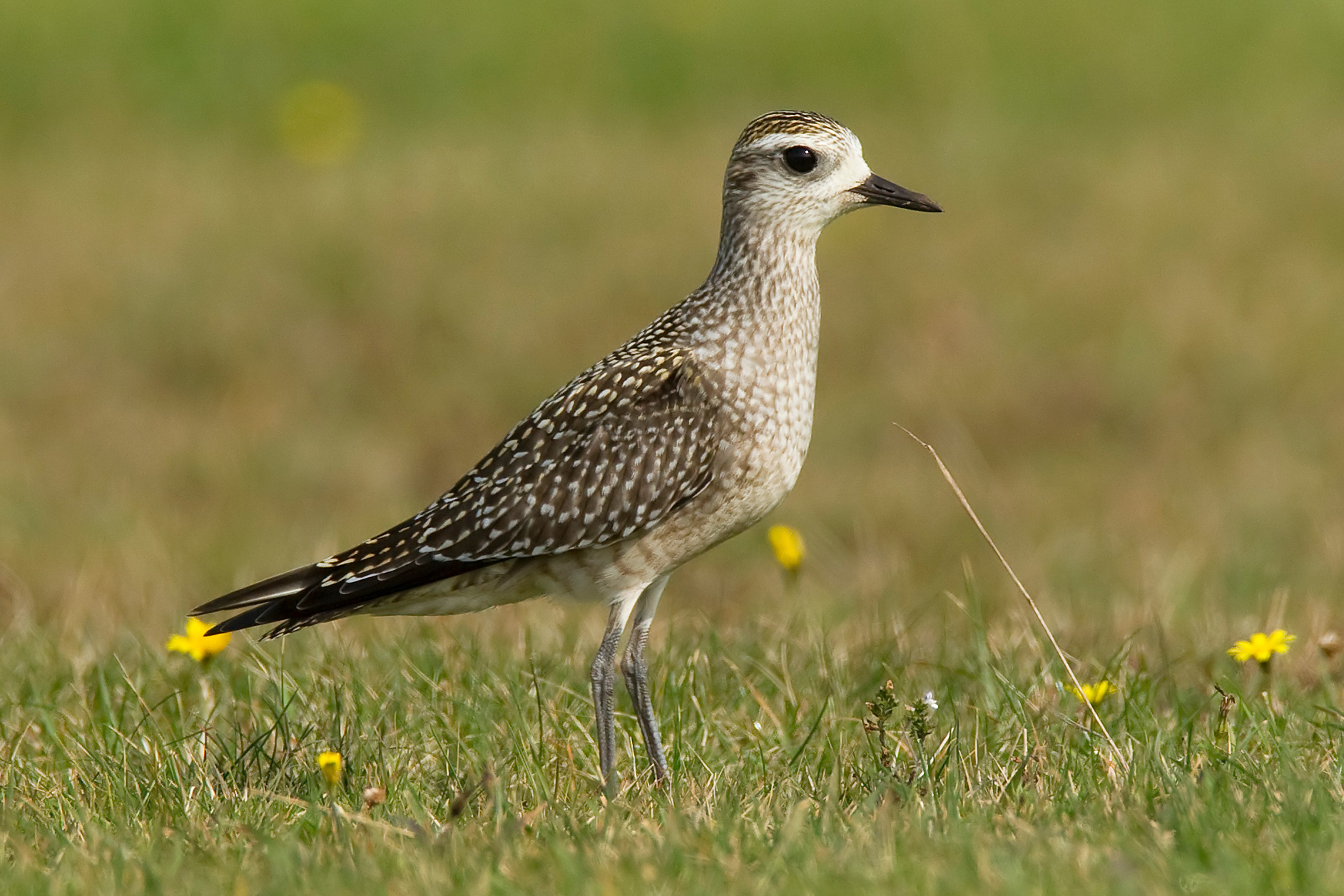 Juvenile American Golden Plover (St Mary's, Scilly, 8 October 2010). The long rear-end and legs and prominent bill of this bird are all indicative of American Golden or Pacific Golden Plover, but what really catches the eye here are the overall grey hues. On a juvenile bird, these colours are characteristic of American Golden. Our identification can be confirmed by reference to the short tertials and the long primary projection. Note also the prominent supercilium (Richard Stonier). 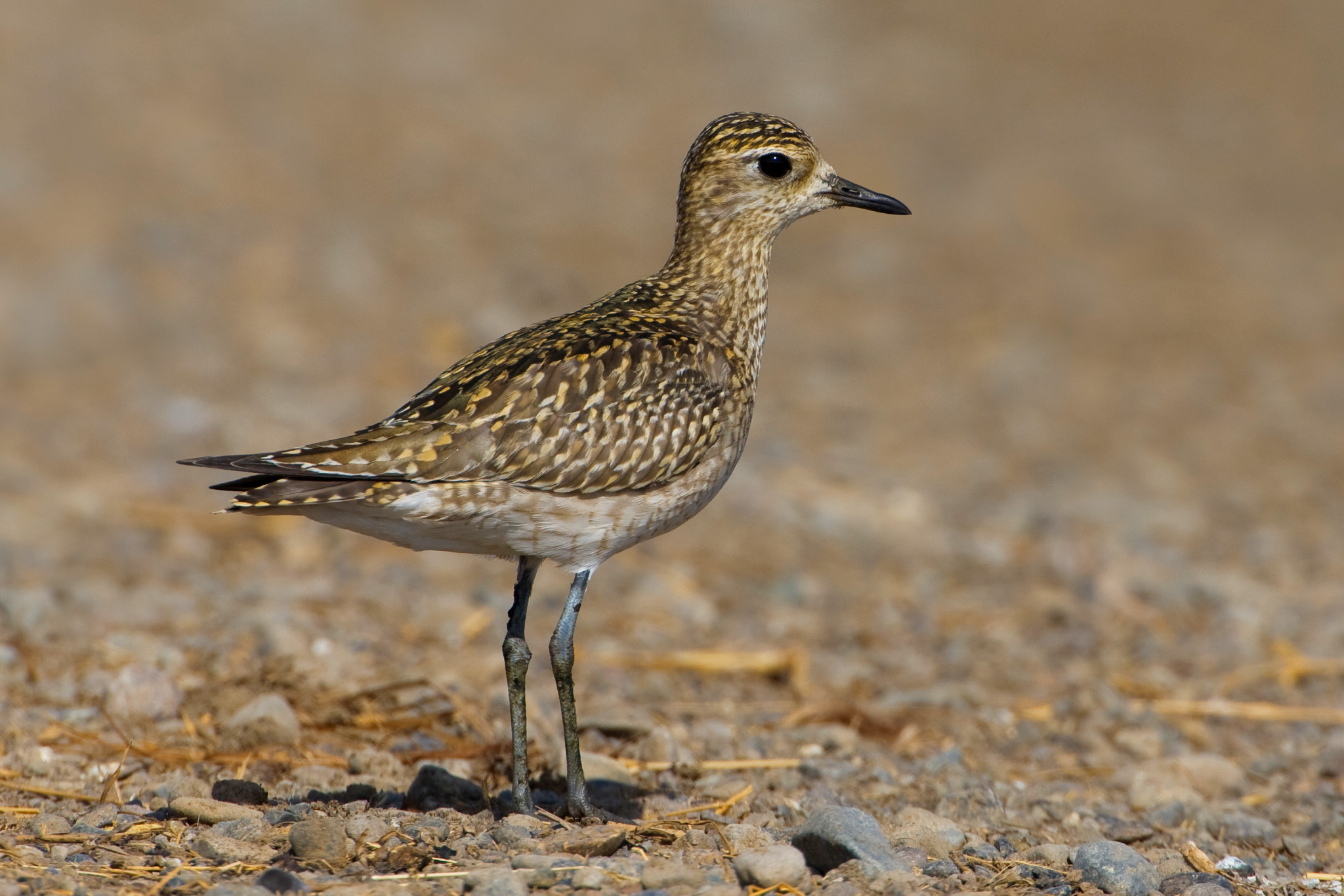 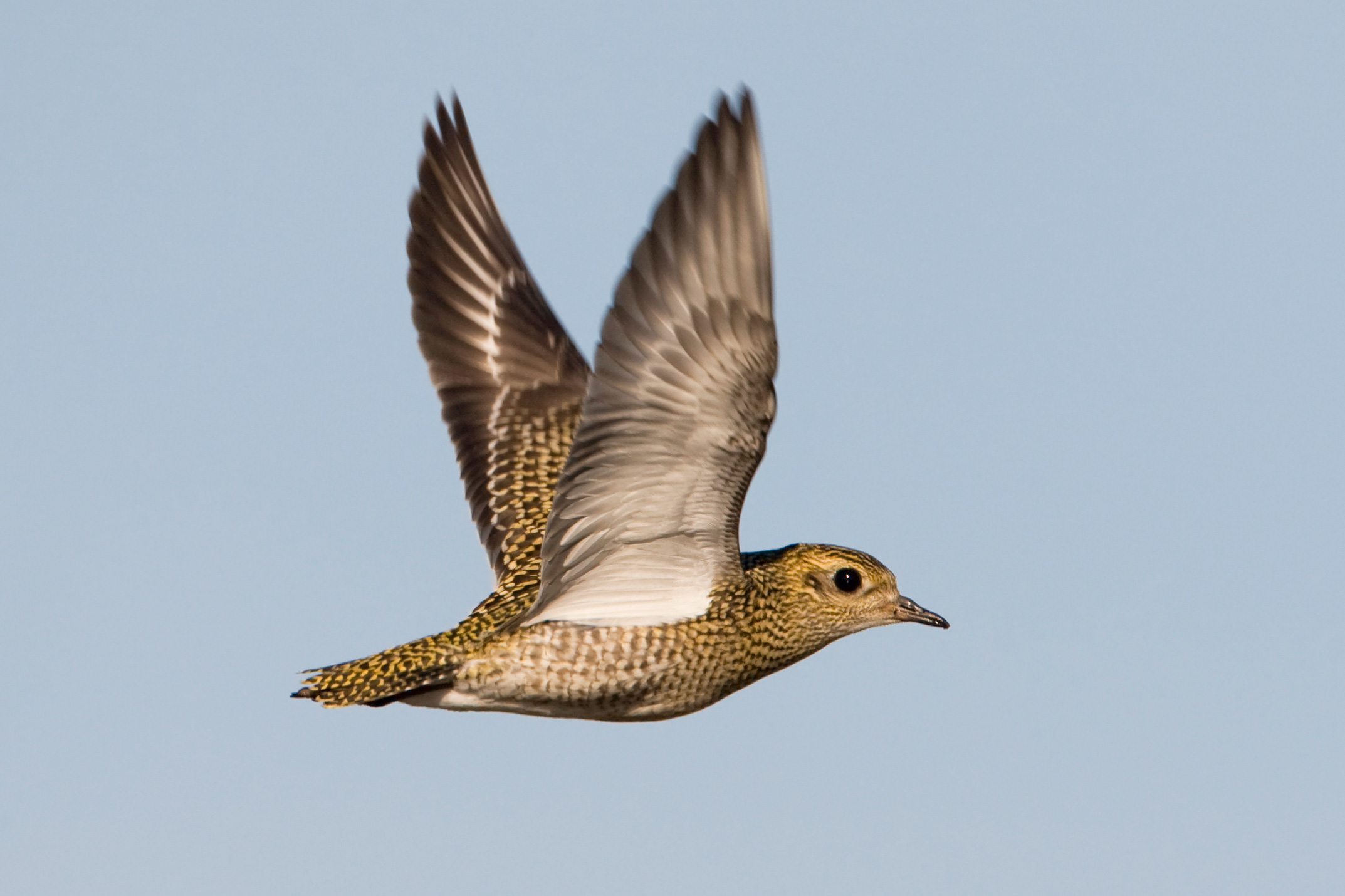 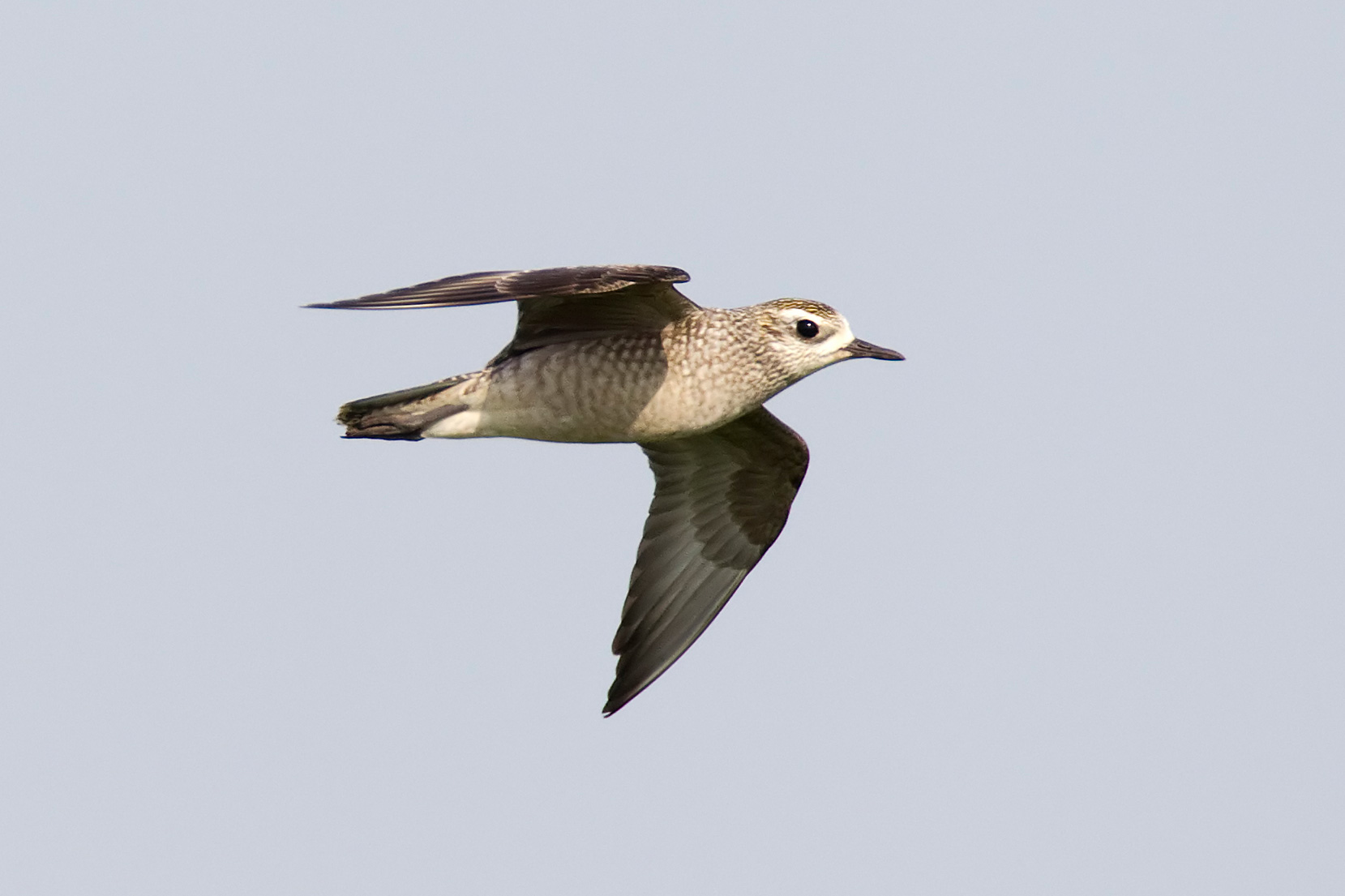 American Golden Plover (St Mary's, Scilly, 8 October 2010). This bird is also slim and delicate with a prominent bill and is therefore a Pacific Golden or American Golden. Unfortunately the underwings are in shadow, therefore masking the dusky axillaries and underwing coverts. As for its specific identity, the striking grey hues are sufficient to identify this individual as an American Golden (Richard Stonier). 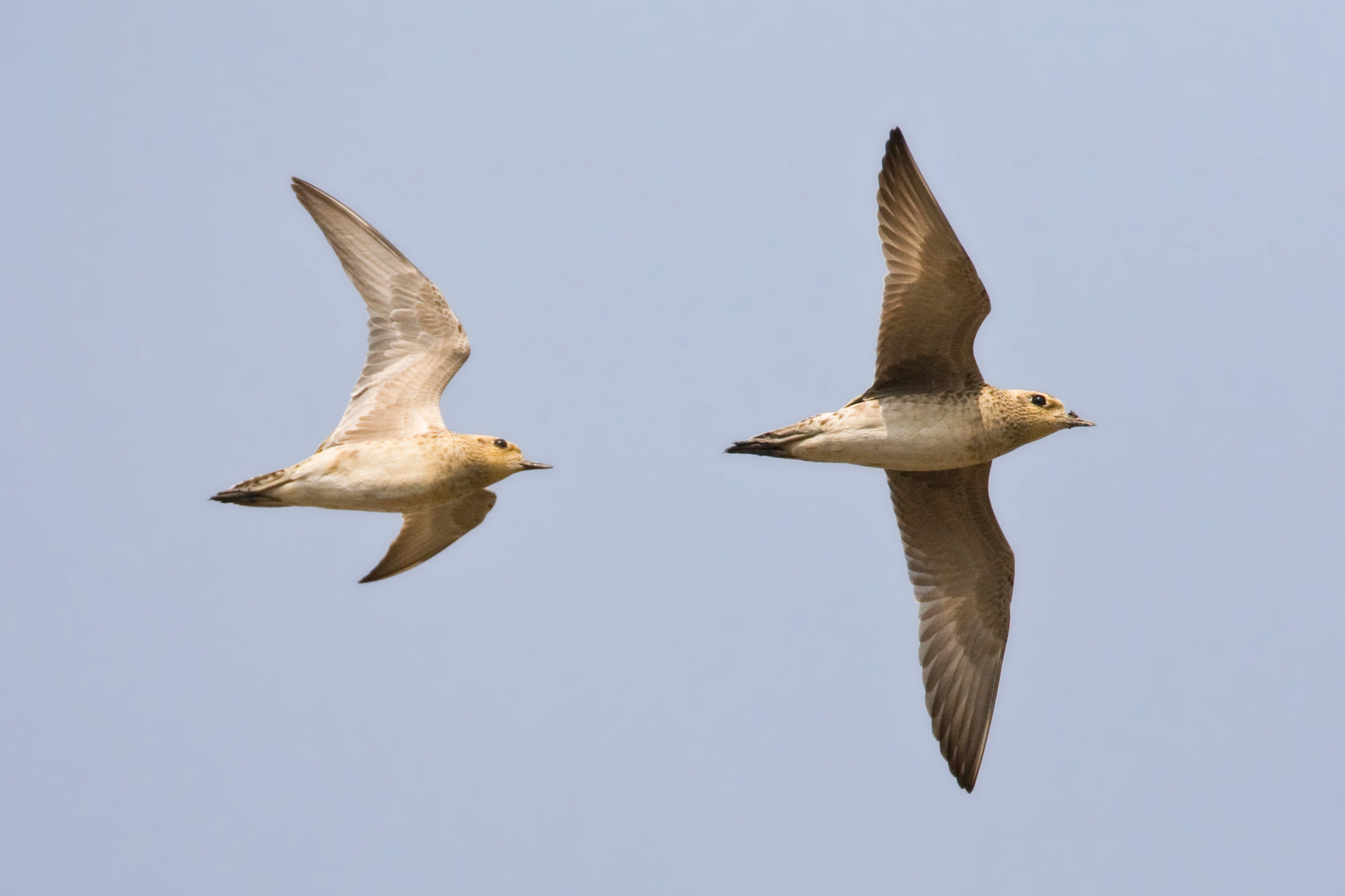 Pacific Golden Plovers (Kaziranga NP, India, 20 February 2009). Although the underwings of the right-hand bird are in shadow, its companion clearly shows a dusky wash across the axillaries and underwing coverts. These birds are therefore either Pacific Golden or American Golden Plovers, a diagnosis supported by their slim, compact structure. They can be identified as Pacific Goldens by the prominent gold spangling around the head and upper breast (Marc Guyt / www.agami.nl). 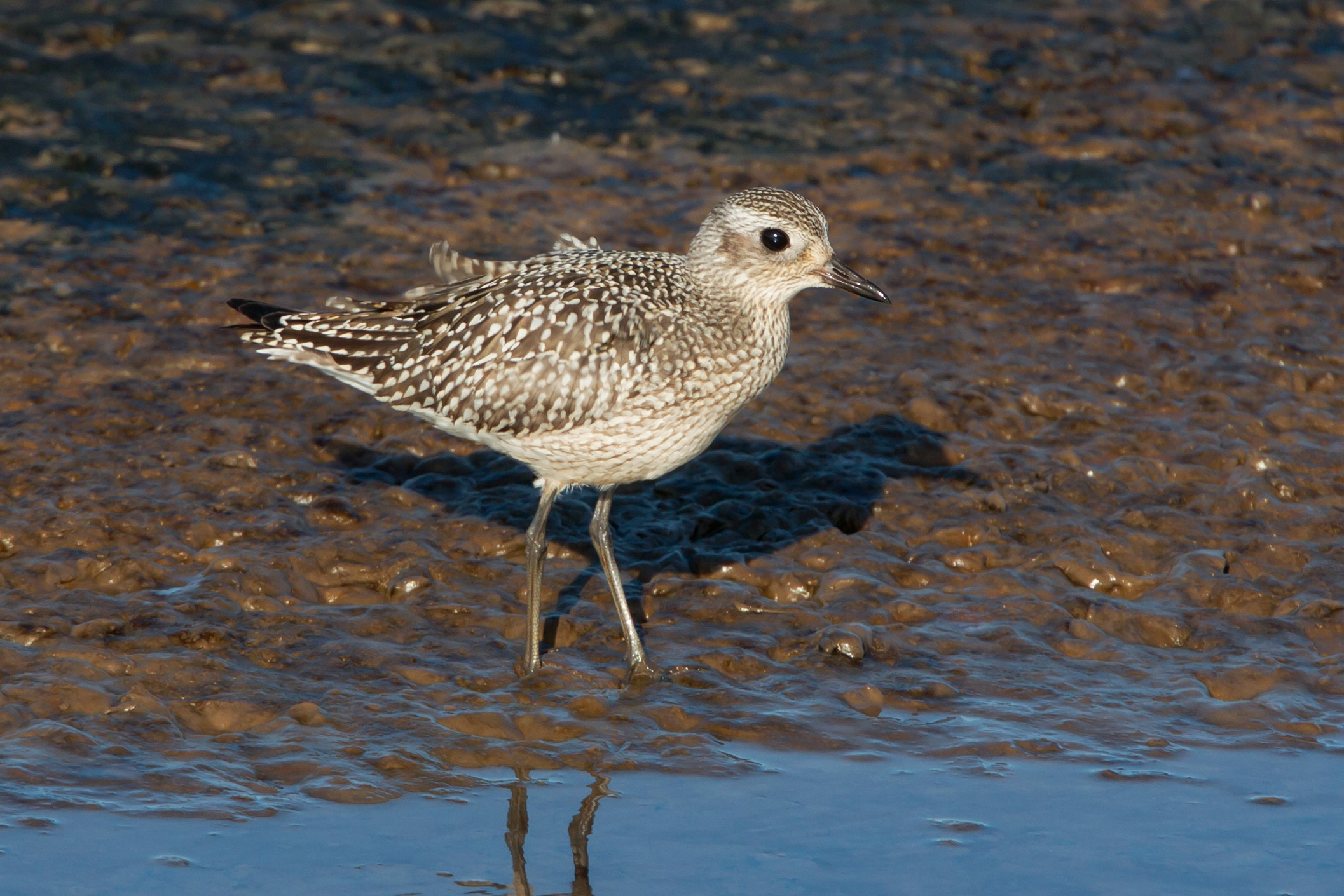 Grey Plover (Titchwell RSPB, Norfolk, 27 September 2013). This bird is similarly strikingly grey. It must therefore be an American Golden Plover mustn't it? Although grey hues are an important feature of American Golden, it is important to confirm that your target bird is a small golden plover. Grey Plover is the classic trap here and this bird, although superficially resembling American Golden in plumage, is typically large, bulky and stocky, with none of the finesse of the small golden plovers (Tony Clarke). 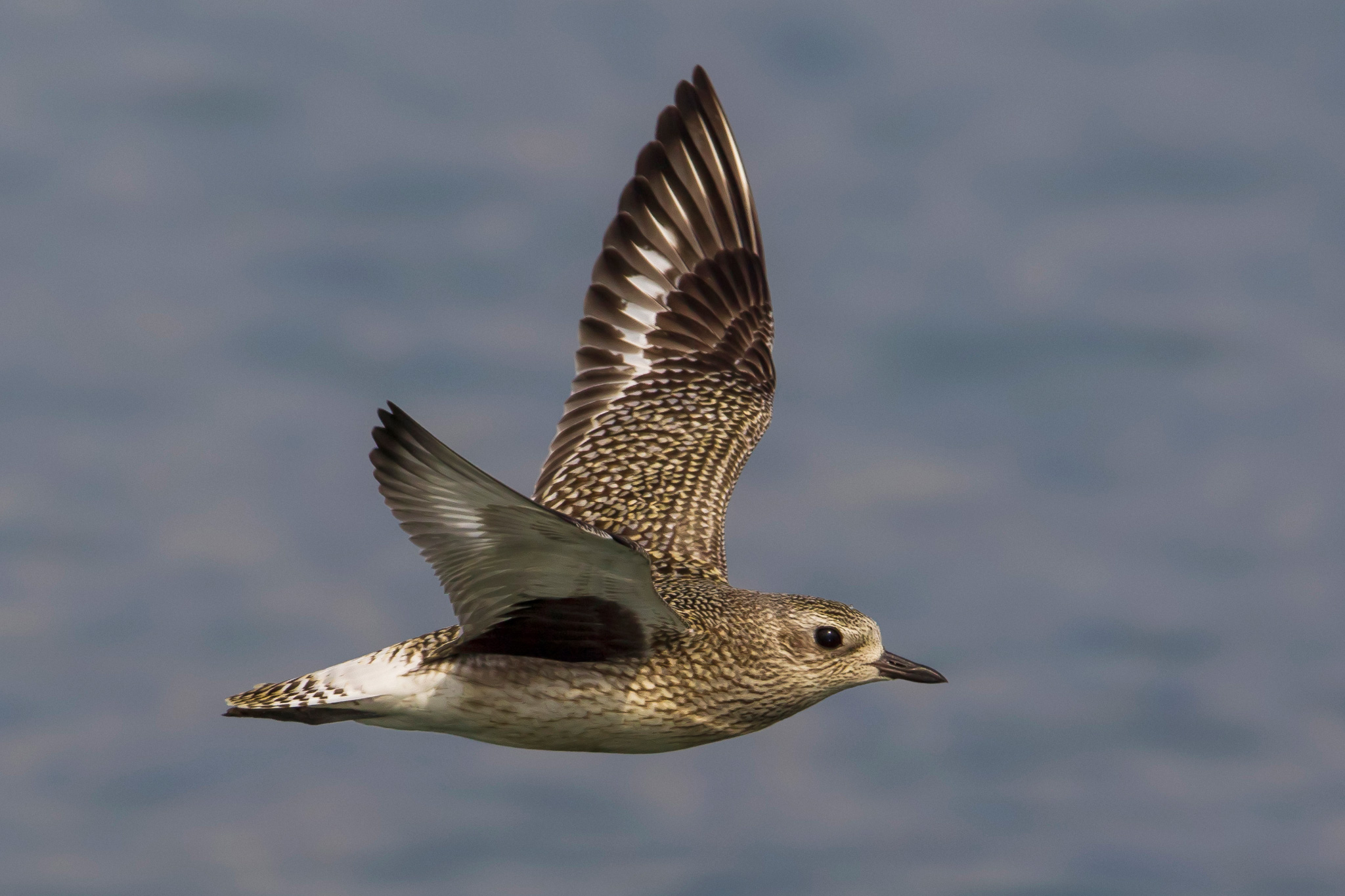