Like many birders I long for autumn to arrive. The lure of migrants and rarities from every compass point descending on isolated islands and remote headlands is too much to resist and I plan accordingly to try and maximise the chance of finding rarities. If the weather gods play ball, then the experience and rewards can be incredible. If they don't, then the emotional rollercoaster of rarity finding can leave you in a state of despair …

Personally, I get no enjoyment from twitching birds. It's all about the finding: the thrill of watching the weather, getting yourself in the right place, working hard, trying to get into the mind of the vagrant, finding it and of clinching an ID – this is what makes me tick, this is why I venture out in autumn (and at any time of year for that matter).

A quick flick through past BirdGuides records shows the last third of September and the first 10 days of October to be consistently good for rarities in Shetland. 2020 was no exception with the likes of Tennessee Warbler, Common Rock Thrush, Eyebrowed and White's Thrushes, Lanceolated and Pallas's Grasshopper Warblers all being reported, not to mention a supporting cast of Great Reed Warbler, Siberian Stonechat, Dusky, Radde's and Pallas's Warblers, Olive-backed and Red-throated Pipits, Eastern Yellow Wagtail and tens of Yellow-browed Warblers all falling in this period. Tempting? Very. And having bashed away at Caithness in 2020 for a couple of Radde's, Pallas's and a few scarce migrants, the lure of Shetland proved too much. 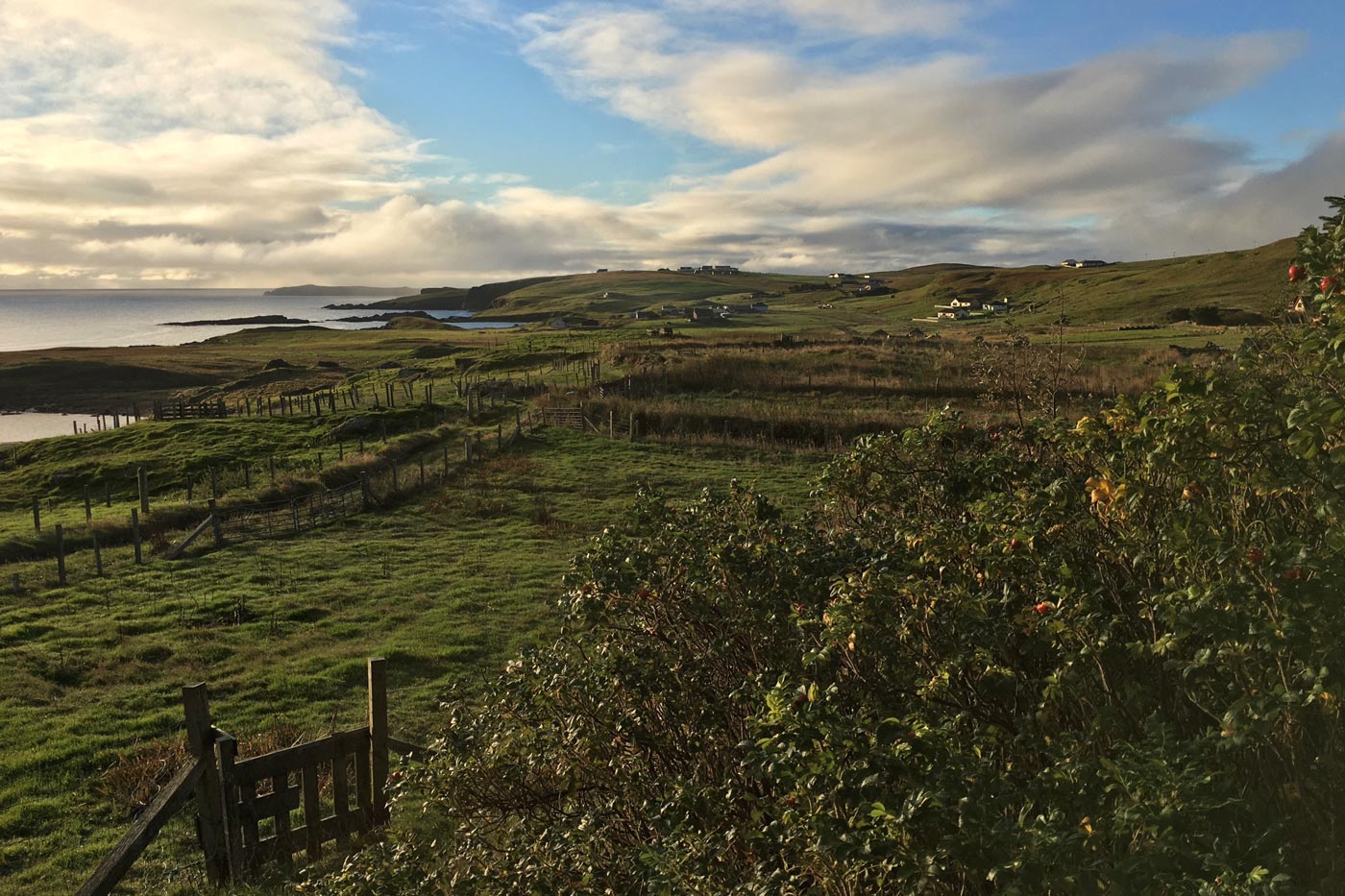 On the back of an amazing 2020 and COVID-19 restrictions being lifted, Shetland was the destination for hundreds of birders in 2021 – including the author (Dan Brown).

A perfect storm of COVID-19 restrictions and a bumper haul of rarities in 2020 meant that Shetland was jam-packed with birders in 2021, with perhaps upwards of 300 on the isles. Many who might normally have been abroad had chosen this northern outpost as a suitable location for an autumn birding fix, including myself and James Eaton. With James's recent Birdwatch article on potential eastern vagrants fresh in our minds, we had our sights set on discovering Britain's first Baikal Bush Warbler or Yellow-rumped Flycatcher – the stuff dreams are made of.

We had 11 days in which to score big and to go home, hopefully, with a mega under our belt and a nice haul of other rarities. Our base was a relatively under-watched area of South Mainland where I had previously found River Warbler and a few scarcities. The forecast on the run-up to our arrival had been OK. South-easterly winds had already been blowing into Shetland for a couple of days and immediately prior to our arrival, White's Thrush and Baikal Teal had pitched in on Fair Isle. These were the kinds of messages we liked to see; now to emulate it ourselves. We vowed to stick to our guns and not be distracted by birds already found.

Our arrival started nicely. A Common Rosefinch glowed in the thermal-imaging scope, hunkered down among the vegetation in a next-door garden, while commoner migrants including a Yellow-browed Warbler added interest. We would go on to realise just how scarce Yellow-broweds would be this autumn. The most exciting moment of the day was when a rail burst out of a steep burn, viewed for less than a second before crashing back in out of sight. We worked the whole area without any joy until suddenly a small heat spot detected with the thermal imaging scope materialised through binoculars into a Water Rail crouching under an overhang in the burn before promptly vanishing, never to be seen again.

The next morning dawned stormy, but the air felt 'rare' and squally showers passed by at high speed. A very confiding Little Bunting in the garden raised hopes further and we pushed on into the lashing rain. By the end of the day, we had clocked up all three expected flycatchers, new Yellow-browed Warblers and a string of commoner migrants, but no Siberian gems, and in the process had received a damn good soaking! 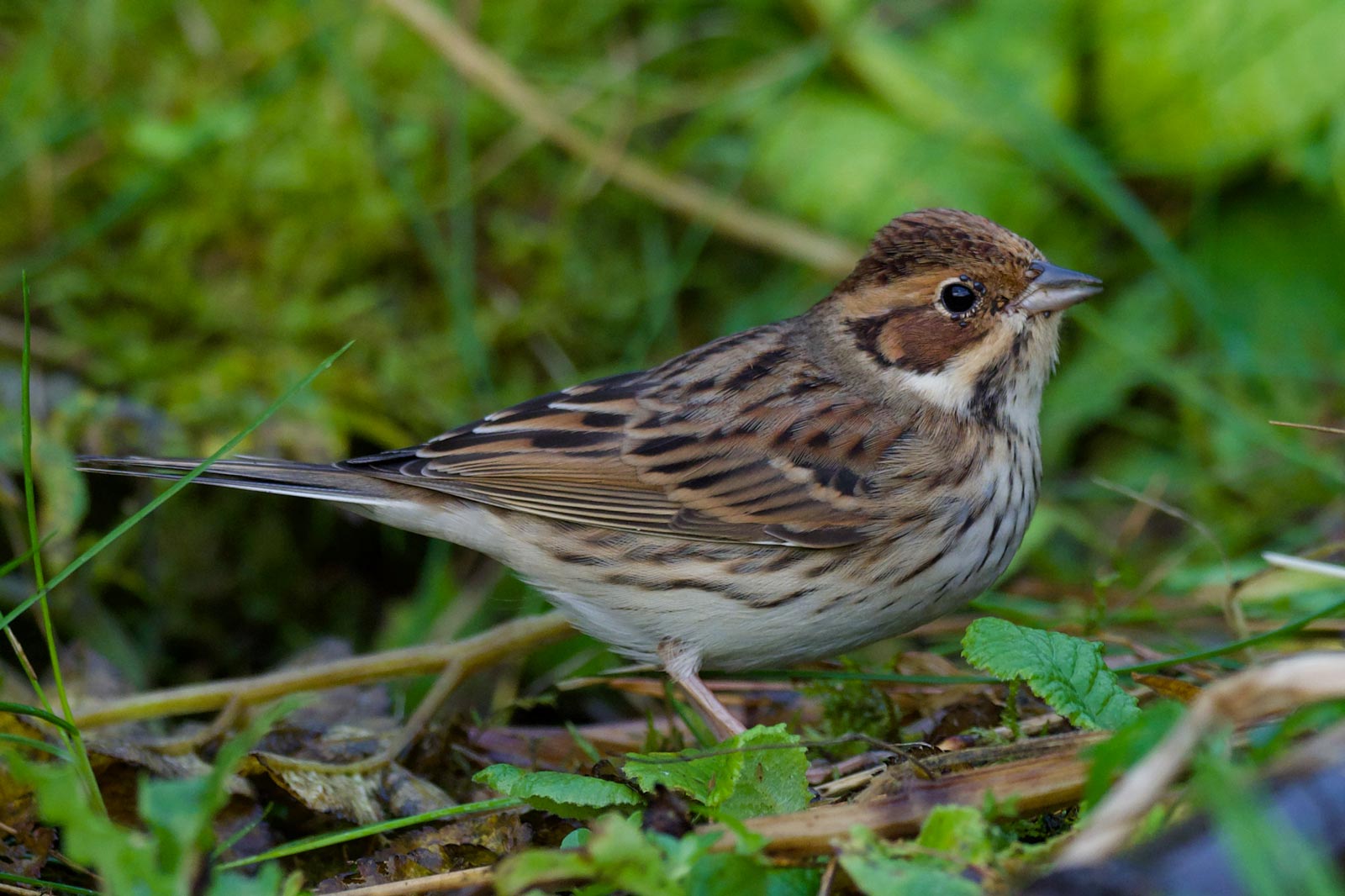 A confiding Little Bunting was among the birds that gave plenty of promise at the beginning of Dan and James's trip (Dan Brown).

It was from this point that the reality of autumn vagrant hunting started to hit home.

Our days were carefully planned to take advantage of weather conditions, search for the 'right' species in the right places and utilise the tech we had (the thermal-imaging scope). We spent the best part of five days flogging our local patch, south and west mainland for little reward other than topping the 15,000 steps mark each and every day. Our thighs and calves ached from working the iris beds and our retinas were starting to burn out with staring intensely at every movement, which, at this time of year on a windy day is a system overload.

Despite relatively benign conditions, very little arrived. Yet to look at Twitter you could be mistaken for thinking Shetland had a lot to offer and, if just driving around and looking at birds it had enough to keep the bulk of birders entertained. A trio of Red-eyed Vireos actually gave hope of finding something American and the discovery of a Western Bonelli's Warbler close to where we were staying further renewed hope but simultaneously generated a little despair. Our luck was clearly not in.

A change in the winds to the north-west isn't always bad and we opted to head north in search of snowballs from the north – Hornemann's Arctic Redpolls. We arrived on Unst as early as possible and headed straight for Skaw, the northernmost point. The air was fresh and we immediately located a very confiding Greenland Redpoll feeding around the buildings together with a Siberian Chiffchaff. Working our way back south we trawled through Valyie where a Lesser Whitethroat and a few commoner migrants showed but nothing more exciting. Halligarth produced nothing. A Common Redstart and Otter at Westing momentarily raised spirits, followed by another redstart and Goosander at Uyeasound, but pickings were slim. 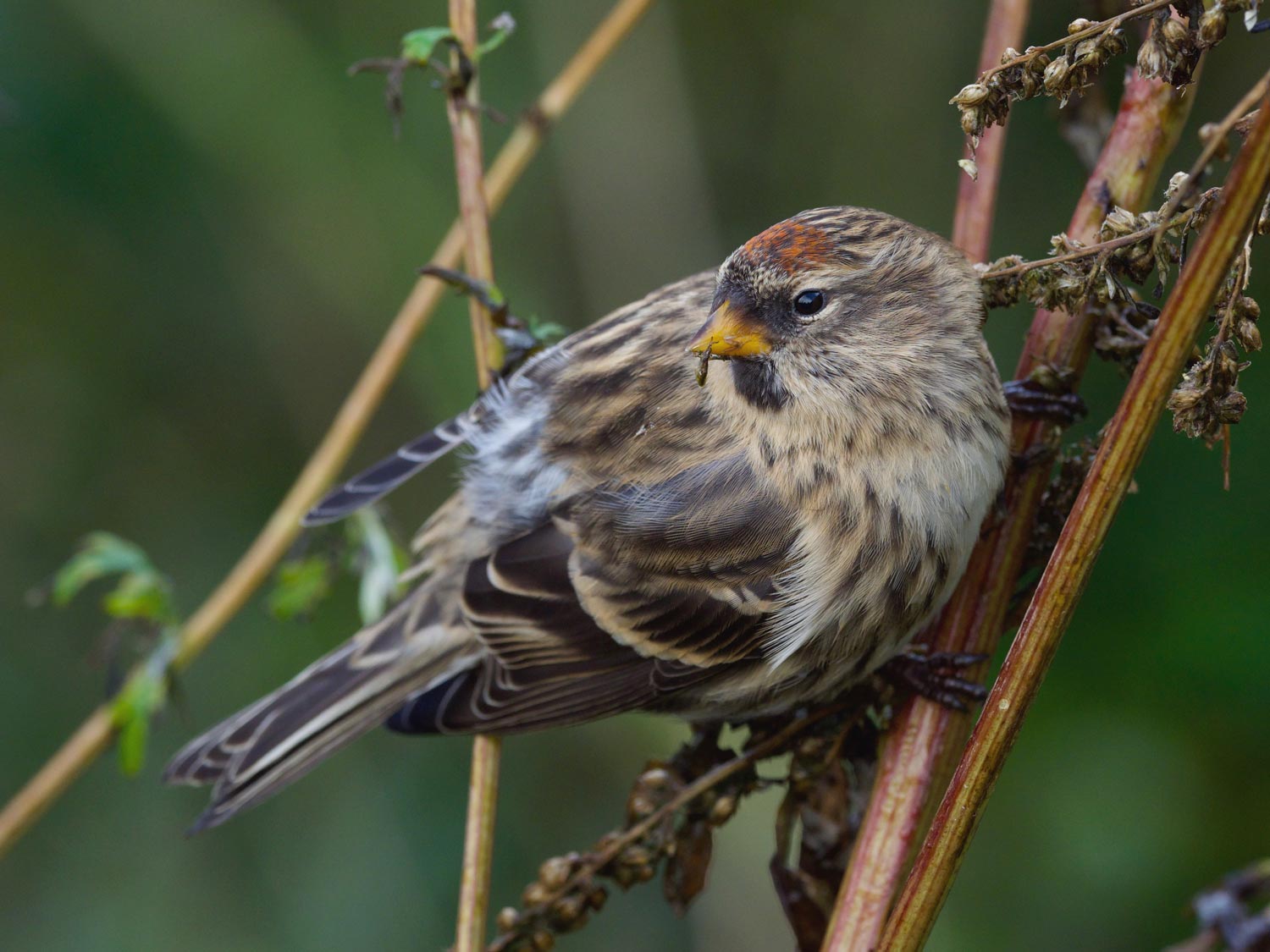 'Ping'. A message drops in to a WhatsApp group. "Hornemann's Arctic Redpoll, Valyie."

Arrrggggh! How did we miss it? Did we miss it? We were pretty confident that we had worked that patch exceptionally well and two other birders were also doing the same and finding the same birds. Our predictions had been bang on, we were just a couple of hours out!

As we boarded the ferry back south, another ping came on the phone. "Orca at Muness, Unst." Another species that we had been keeping eyes peeled for and that the accompanying wives were keener on seeing than redpolls! We departed Unst despondent. We were doing all the right things in the right places; we had the right species on our radar, but zilch! Nothing. Just a smack in the face by reality.

Our final day on the islands offered one last chance to score. We opted for Bressay, an under-watched island with some great bits of habitat. Our plan to try and find Hornemann's (again), starting at Gorie. James and I left the ladies in Lerwick and joined the ferry queue.

All the expletives in the world weren't enough for this moment. This was the lowest moment of a trip that can safely be regarded as a failed quest. We continued with our plan and walked out to Gorie. As we approached a sublime snowball of a finch bounded out of the plantation briefly landing on the gate 2 m from us and then onto the nearby fence, before returning to the plantation. The finders were proudly enjoying it and the Greenland Redpoll alongside it. After just 10 minutes, both erupted from the spruce towering into the sky and vanishing off high to the north-west. Our predictions and timing perfect, this time someone got there just before us! Like two sulking teenage lads we kicked our way back to the car, worked a few bits of habitat discussed how we could possibly be so unlucky or useless before finally heading back to Lerwick and the journey south and home. 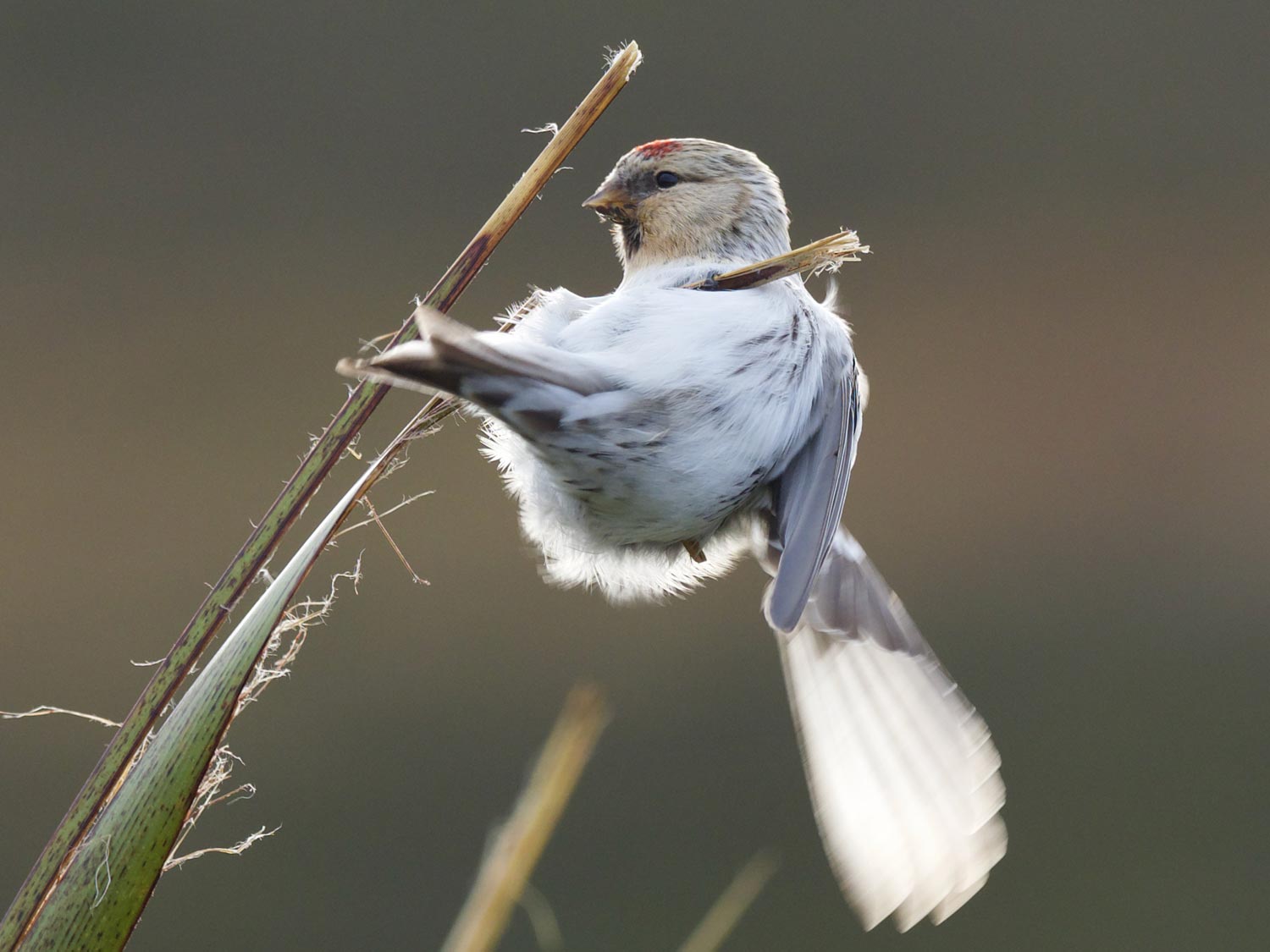 This Hornemann's Arctic Redpoll was found by other birders at Gorie, Bressay, minutes before Dan and James arrived there (Dan Brown).

Of course, it wasn't all doom and gloom – just mostly. The 'responsible birding' advert playing immediately before No Time to Die at Lerwick cinema made us chuckle. Surely this is the only place in the world where James Bond is preceded by a birding ad?! There was also a sheep with a trellis stuck on its head which kept us amused over several days, not to mention its field buddy who managed to get its head stuck in exactly the same bit of fence on a daily basis. Can you tell that things were getting tiring? 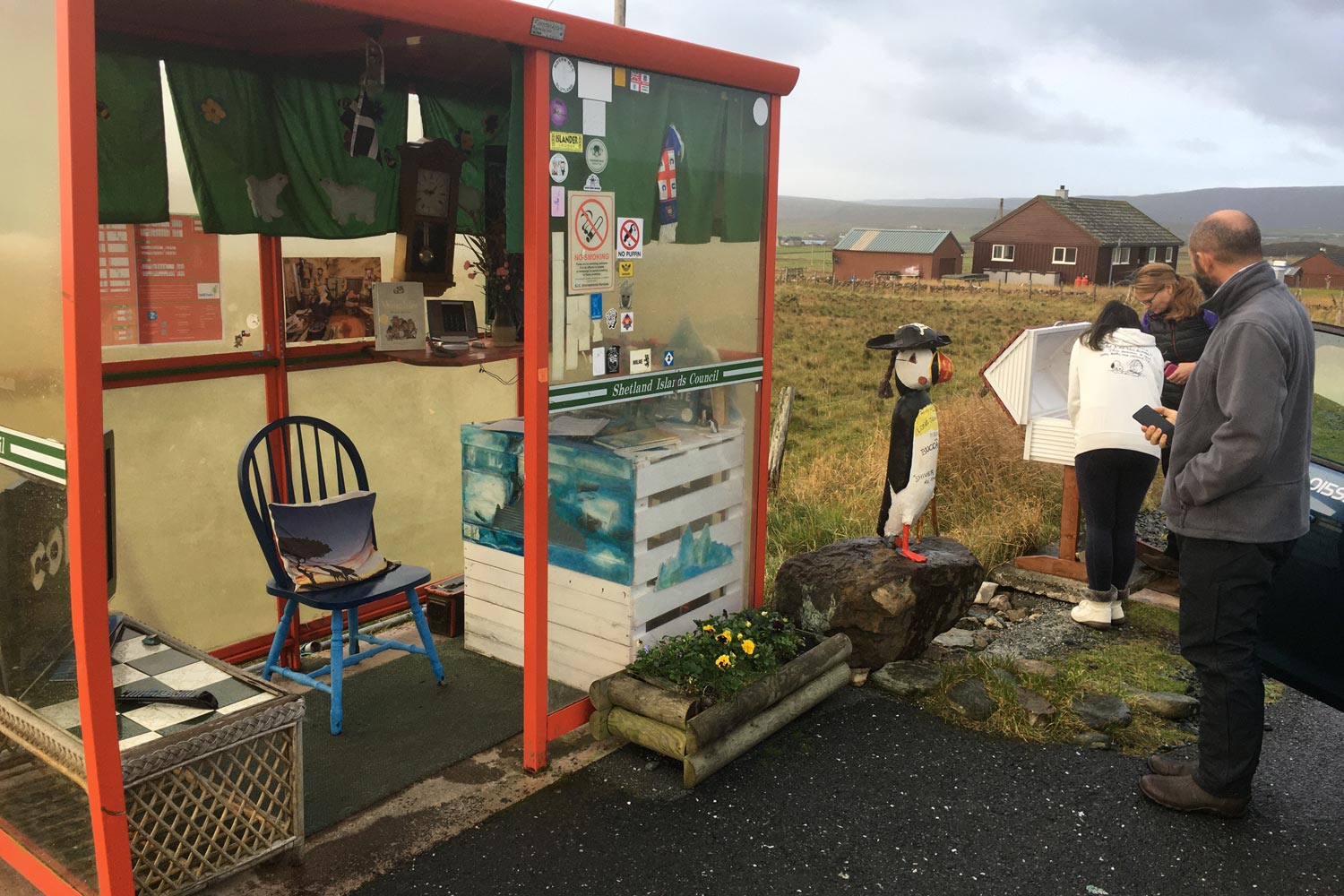 We came away with three self-found Little Buntings; our third bird on Whalsay was a very satisfying end to a good day's birding on this highly underwatched island. It also made us work hard to confirm its identity as it bounded around a shallow valley. The cake-stop on Unst undoubtedly added to the enjoyment of the day, but the stars of the show had to be the Lerwick Otters.

During our time in Shetland, it became obvious that the local urban Otter family had become rather obliging and on receiving a tip-off that they were out and performing we headed down to the harbour and were treated to the most incredible experience as a female and two well-grown kits foraged along the coast, climbed ladders and came up to inspect us onlookers, approaching to within a couple of metres. Even the incessant rain went unnoticed as we watched, transfixed by their antics. 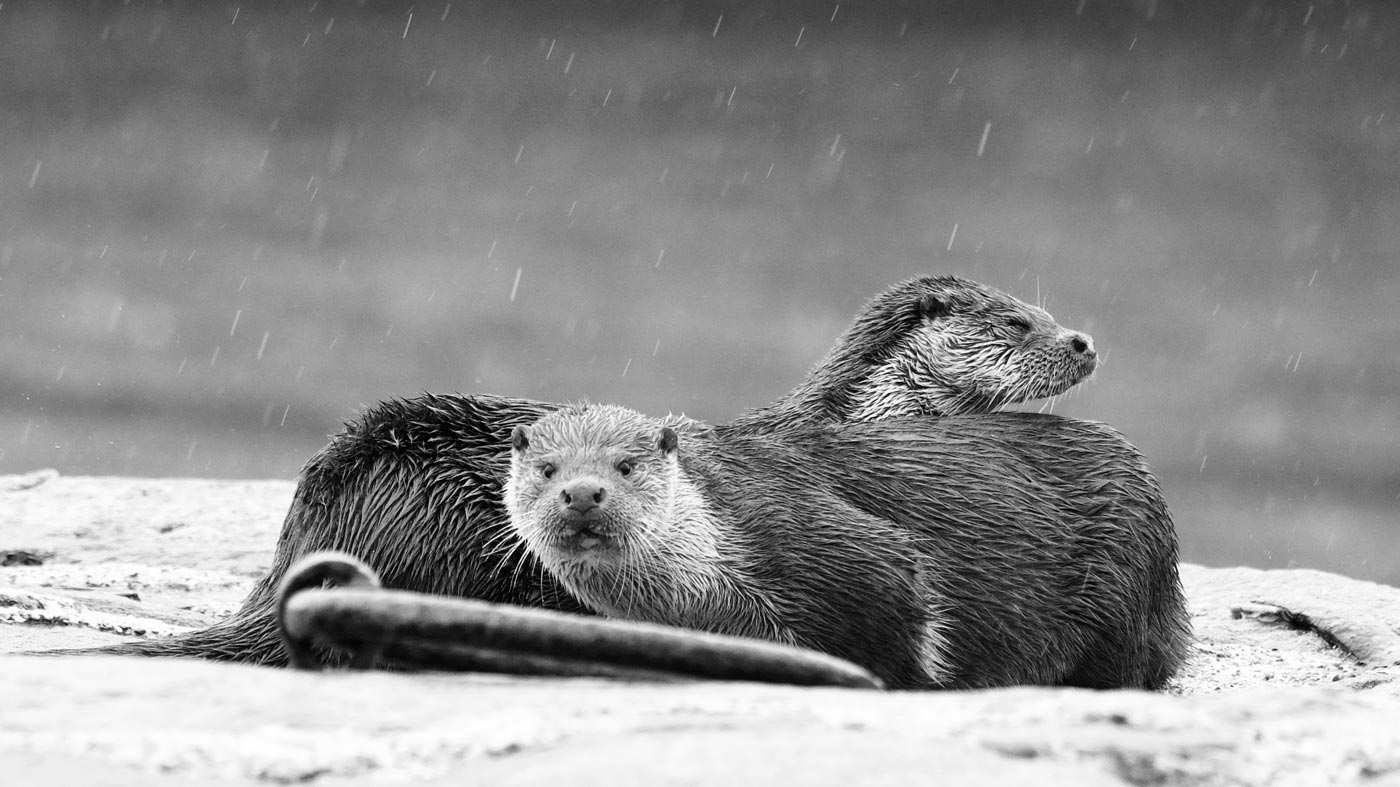 The Lerwick Otters provided some brilliant encounters during the trip (Dan Brown).

We departed Shetland after 11 days of hard graft and very, very little to show for it. It was a stark reminder that bird-finding on Shetland can be far from easy – in fact it can be damn difficult. Despite daily updates from many birders on the islands listing Woodchat Shrikes, Western Bonelli's, Radde's, Dusky and Lanceolated Warblers, Red-eyed Vireos, White-billed Divers and so on, 2021 will go down as a particularly poor year in Shetland – and one in which we were supremely professional in validating!