Being a birder and having the privilege of living in West Cork, it is impossible to visit the various headlands during spring and autumn and not pay attention to the sea. While there are often many exciting passerines to be found on land and plenty of waders on the estuaries, it can be hard work in such a vast area where there is so much good habitat, yet you may not see another birder from one end of the week to the next. But this richness and isolation is part of what makes it a great area to bird – and indeed seawatch.

I used to spend a lot of time sitting on either Galley or Mizen Heads. I became well acquainted with the more regular fare one would expect among the thousands of Manx Shearwaters – the larger shearwaters, the four skuas, various gulls and alcids and, of course, storm petrels.

As the years went by and I started to read back through old records, learning of what people were seeing from pelagic trips from different spots along Europe’s western seaboard, I began to think ‘why not here?’ There had to be quality seabirds occurring off south-west Ireland, and a boat offered a good chance to get up close to those distant specks we see passing headlands in sometimes incredible numbers. That was it – I needed to get out there.

I started to ask around locally about anyone who might be interested in doing some wildlife trips out to sea. There were already several whale-watching operators so I didn’t think it would be too hard to get someone to take us out and a few willing bodies to come along. The seeds were being sown.

It was with great fortune that I came across David Edwards. When I spoke to David and told him what I was thinking of doing, he offered to take me out on his boat one evening. We could go out from Galley Head and talk more about what I wanted to do. So it was on the evening of 19 May 2014 that we headed off from Ring pier, near Clonakilty, and trundled out towards Galley. Little did I know that, after that evening, my life would never be quite the same again!

As we headed out, a Bonxie (Great Skua) came right over the boat heading away west. I’d never seen one this close before – wow, what a bird! On we went and we started to see a few Manx Shearwaters. Again, I’d never been so close. You can see them close while seawatching from Galley, but this was unreal – I was eyeballing them and I’m sure they were eyeballing me. After a while chatting – our conversation interrupted every now and again by my head swinging away to look at Northern Fulmars, Northern Gannets, Common Guillemots or Manx Shearwaters – we came across a large raft of 500-600 Manxies feeding, resting and generally milling about. An Arctic Skua came in and started creating havoc. Then another, then a Bonxie, then another Arctic. This was mad – all right in front of my eyes, absolutely mind-blowing! I knew right then where I wanted to be and what I wanted to do: seabirding, at sea. 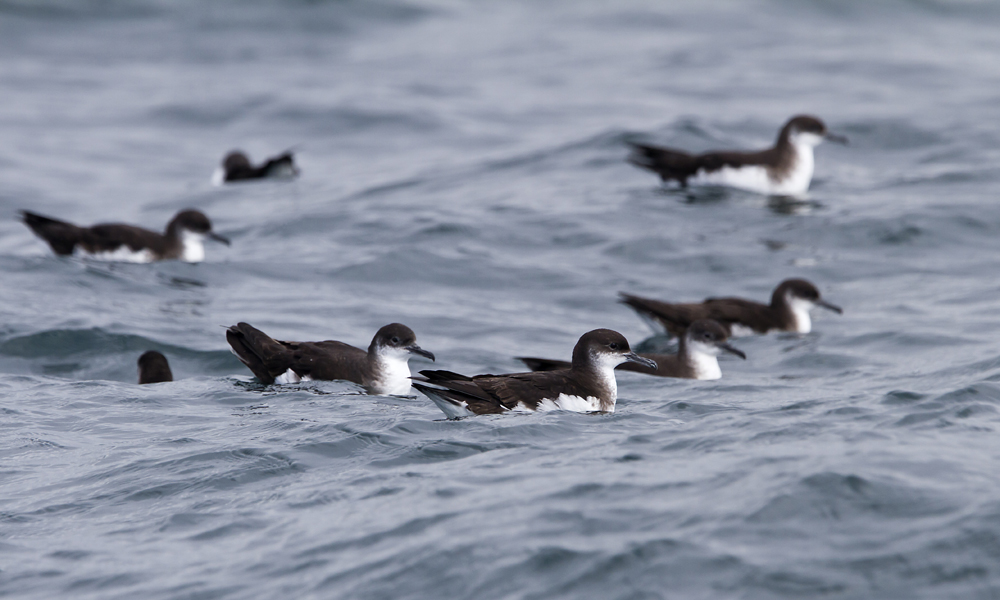 Seeing Manx Shearwaters up close from a boat for the first time proved a life-changing experience for Paul, and inspired him to form Shearwater Wildlife Tours (Photo: John Fox).

I'll never forget that first outing. And there have been many other days that I will never forget: I hadn’t expected there to be so much to be seen offshore from West Cork. I was lucky enough to tag along with David on a few other occasions when he fished for Blue Sharks. Four Wilson’s Storm Petrels the first day, five the second, more whales and dolphins than I’d ever seen before – it was truly unbelievable.

After a few early summer runs with beautifully calm seas and scorching sun, dolphins, whales and Ocean Sunfish abounding, our next trip was coming up and it was looking a bit rough. A fairly strong westerly had taken hold, with the possibility of rain forecast. I didn’t quite know what to expect. Off we went, bounding along to Clonakilty Bay. It was too rough to see much cetacean activity and there wasn’t a chance of chumming. I was getting a bit worried, while everyone on board was getting a bit wet; maybe we should head back in. We turned round and started to retrace our line out when David noticed a blow. I had caught a glimpse of something in the corner of my eye, so we turned around and headed in the direction of the ‘something’ when – woah! – a Minke Whale doing a salmon leap into the air.

Everybody on board was enthralled as we watched the Minke breach 20-odd times well clear of the water and create an enormous splash. All eyes were on the whale, but I went to the back of the boat to keep scanning the water. A bird came down wind of the boat and turned to come and have a closer look at us. I couldn’t believe my eyes, or my ears, as my mouth shouted: “FEA’S PETREL!” There was so much excitement in my voice that everybody stopped watching the whale to rush back and see what I was yelling about. All on board were there for the cetaceans, save for one birder. I was delighted that he got onto the Fea’s-type and everybody else was pleased for us, as they could tell something special had happened. 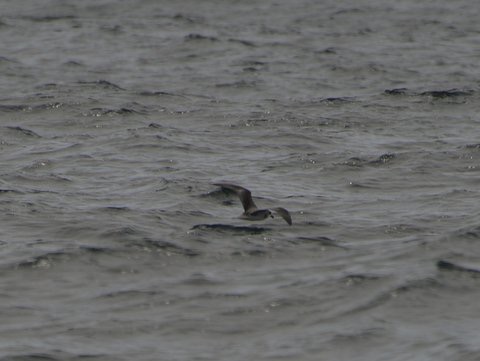 A seminal moment: Shearwater Wildlife Tours' first Fea's-type Petrel. Since then there have been a further three recorded (Hillary Hale).

That was going to take some beating. But over the following few years I have learned that there is much to see off western Co Cork. The birds kept coming. In three years we have clocked up a further three Fea’s, including two together one morning. Wilson’s Storm Petrels have become a regular feature in July and August, with a 100 per cent success rate in these months in 2016, the species often seen in good numbers. This was completely eclipsed in 2017 when we had nine in June, a peak count of at least 40 in July and then a staggering 56 tallied at the start of August. We’ve even had days where these two desirable species have been recorded on the same trip. 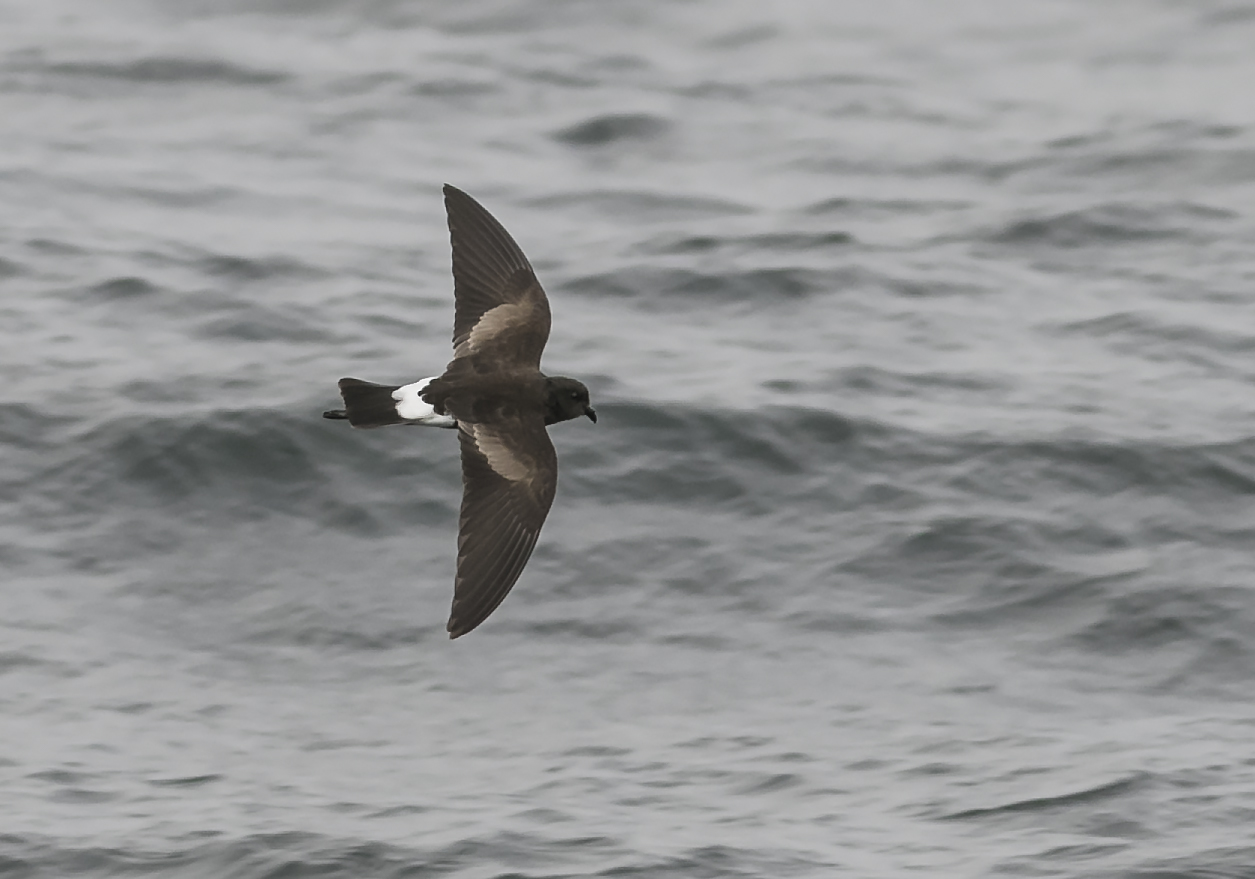 Wilson's Storm Petrel has proved reliable off West Cork: 2016 produced a 100 per cent success rate in July and August while 2017 produced huge counts of up to 56 (John Fox).

The rarer seabirds are clear highlights, but the numbers of commoner species can also be mind-blowing. Manx Shearwater numbers occasionally reach the tens of thousands and Sooty, Great and Cory’s can be uncountable. Skuas are well represented, while Sabine’s Gulls, auks, terns and Grey Phalaropes all put in an appearance at some stage during the year. 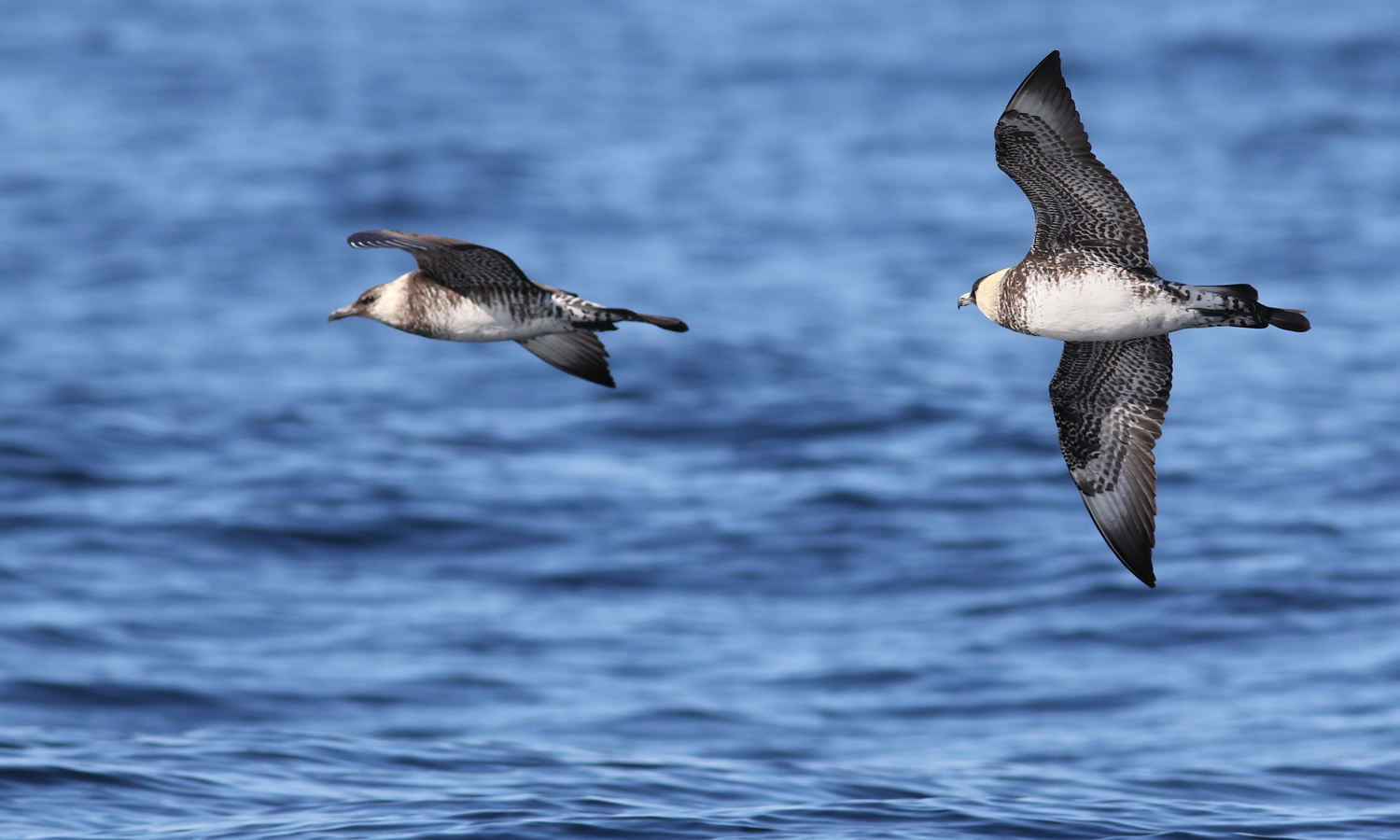 Excellent views of all four skuas are obtained regularly off West Cork, including these Pomarine Skuas (John Fox) ... 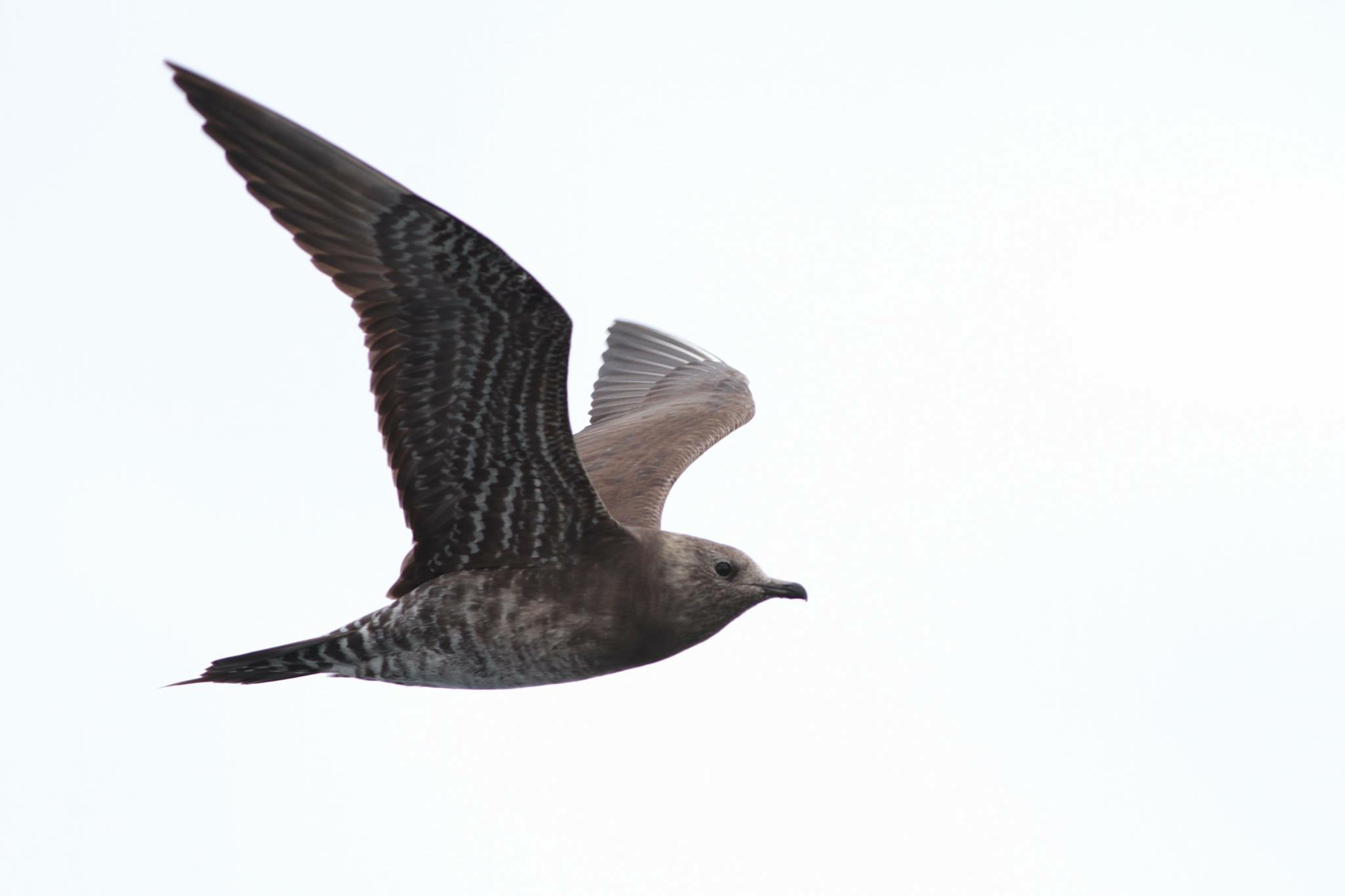 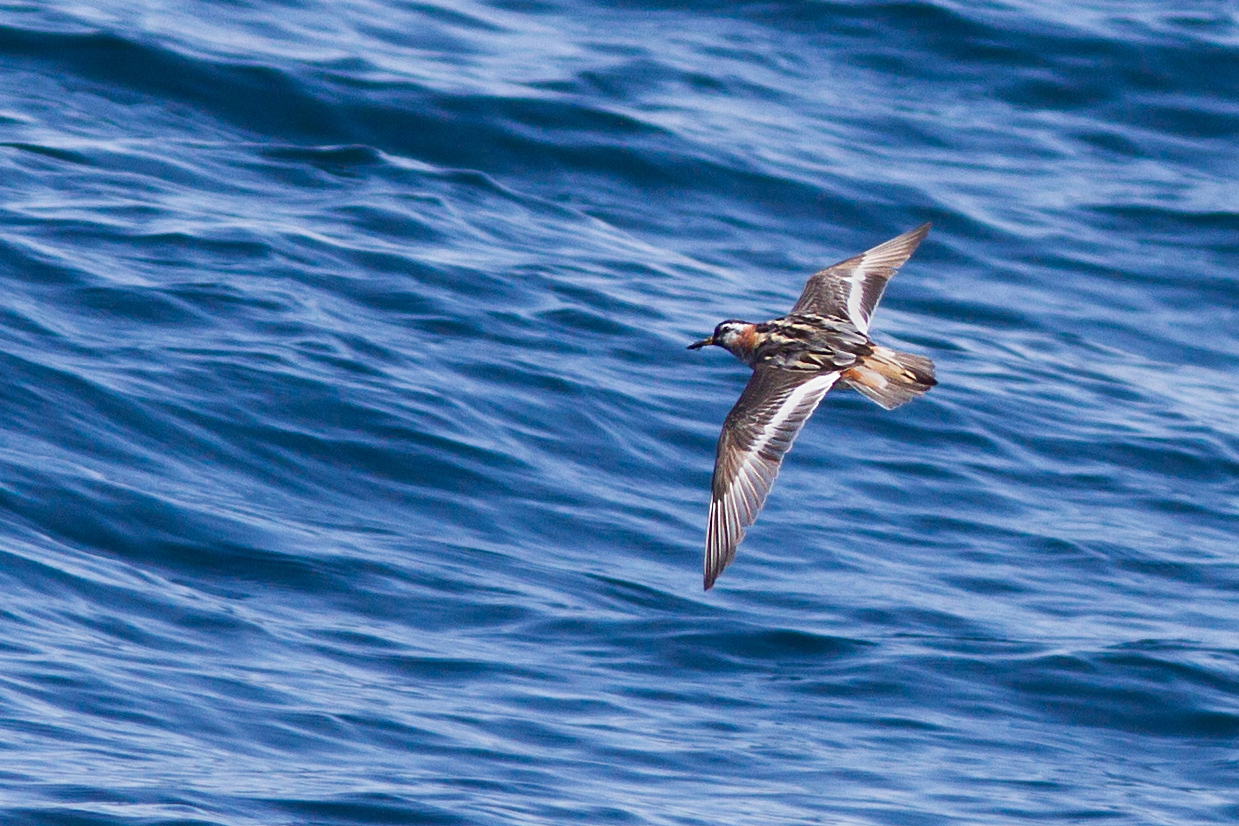 Scarcer species such as Grey Phalarope (this one still in partial breeding plumage) and Sabine's Gull are often seen (John Fox). 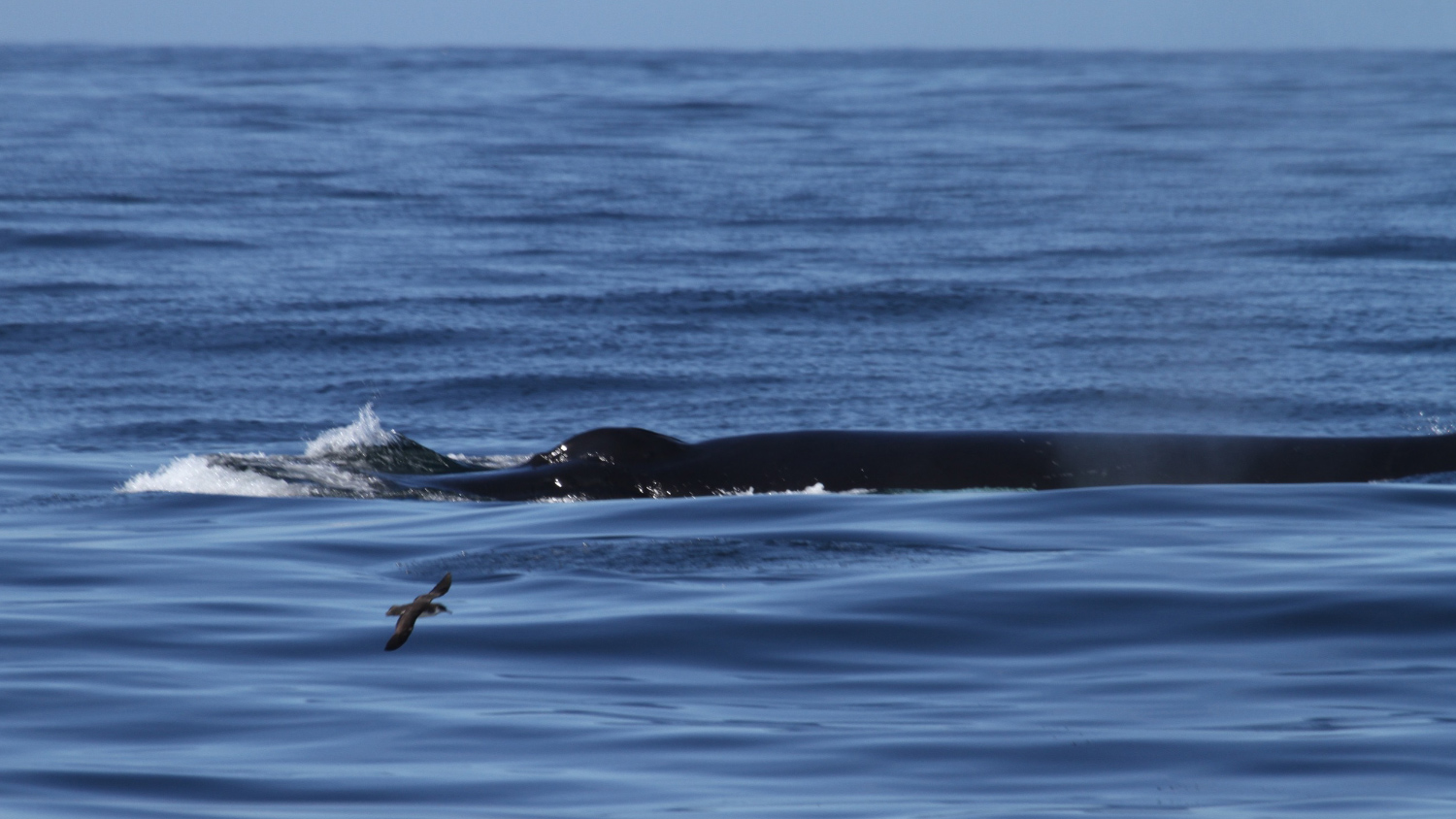 Cetecean sightings frequently include the second-largest animal on the planet, Fin Whale. Here a Manx Shearwater looks positively microscopic in comparison as it passes (Paul Connaughton).

Pelagics will now run every weekend up until the end of October – we hope to add Leach’s Storm Petrel and maybe a South Polar Skua to our list. The waters off West Cork will no doubt keep providing good birds in coming years. The cetaceans we regularly encounter surely have an impact on the birds. Humpback, Fin and Minke Whales often create dramatic feeding frenzies, as do the ever-present Common Dolphins. Ocean Sunfish, Blue Shark, Common Porpoise and Grey Seals have all come into the chum trail. No two trips are ever the same, and each one produces a surprise.

Shearwater Wildlife Tours operates out of Baltimore, Co Cork. The proximity to deeper waters not far offshore, and the large populations of local seabirds, means the birding starts within a few minutes of leaving the pier. We can cover a lot of water during the trips, but usually we set a trail within an hour and never have to wait long for the storm petrels to attend. Trips are usually five or six hours in length, giving plenty of time to see the target species. With some of the best restaurants and accommodation to be found anywhere in Ireland and pick-ups and drop-offs at the renowned Cape Clear Island, a trip to West Cork for any seabirder is a must.