Patching in paradise: locking down in the Colombian Andes

Colombia needs little introduction as an international birding hot-spot. The prize jewel in the already glittering crown of the Neotropics, it is (numerically speaking) home to the world's greatest avifauna, with a staggering total exceeding 1,900 species.

Despite a history tarnished with unrest, present-day Colombia is more accessible, peaceful, and firmly on the map as one of – if not the – world's premier birding location. As the country has stabilised, birding tours and routes have become relatively well established, largely focusing on the three Andean cordilleras and the famous Santa Marta mountains. These are all well positioned to target Colombia's major hubs of avian diversity, in addition to its 80 endemics. For the independent traveller, the situation is more encouraging still, with many major birding sites accessible via public transport and a douse of personal endeavour. 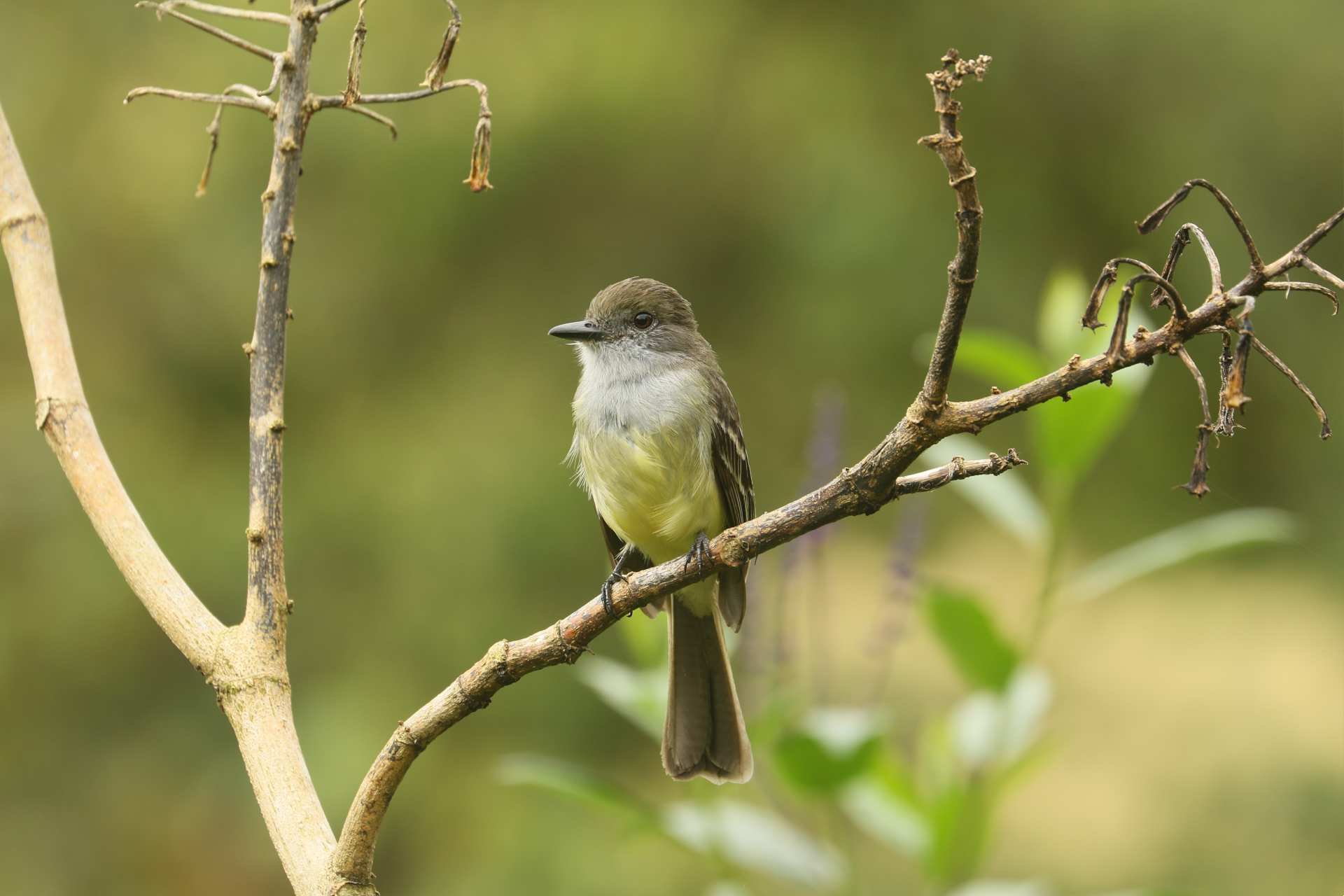 Despite being locked down on a rural Colombian farm, Sam embraced foreign patchwatching and was able to mark down territories of local species, such as Pale-edged Flycatcher (Sam Jones).

With three-week tours frequently totalling 700 or more species, a visiting birder could be forgiven for wanting to cover as much ground as possible. But what about a slower approach? Intensively watching a patch might not be the most immediately appealing objective to a visiting birder when faced with such avian riches, but situations change, and this was the hand that the COVID-19 pandemic dealt me. A remote farm in the Cordillera Central of the Colombian Andes for two months. A patchwatcher's paradise.

I was a month into a lengthy birding meander through Colombia when things changed rapidly. With a national lockdown looming and international borders closing at a rate of knots, I made a hairpin turn away from the beautiful cloudforests of Western Andes in Chocó, to Medellín. Here, faced with the extortionate prices of last-minute homeward-bound flights and the desire not to go home, I chanced on the details of a small farm accepting volunteers on their property. Following a phone call and a scramble of logistics in preparation for what could be a lengthy stay, two days later I found myself, laden with belongings and food stores, weaving in and out of cattle pastures along a long muddy trail beside a small river at dusk.

The farm was small and remote, some 20 minutes from the closest road and a further 30 minutes from the nearest town, Alejandría. Perfect. My daily routine was simple: rise at dawn and bird on the small trails that led in and out of the farm, then look after the farm's chickens, as well as doing other odd jobs for my board and keep. 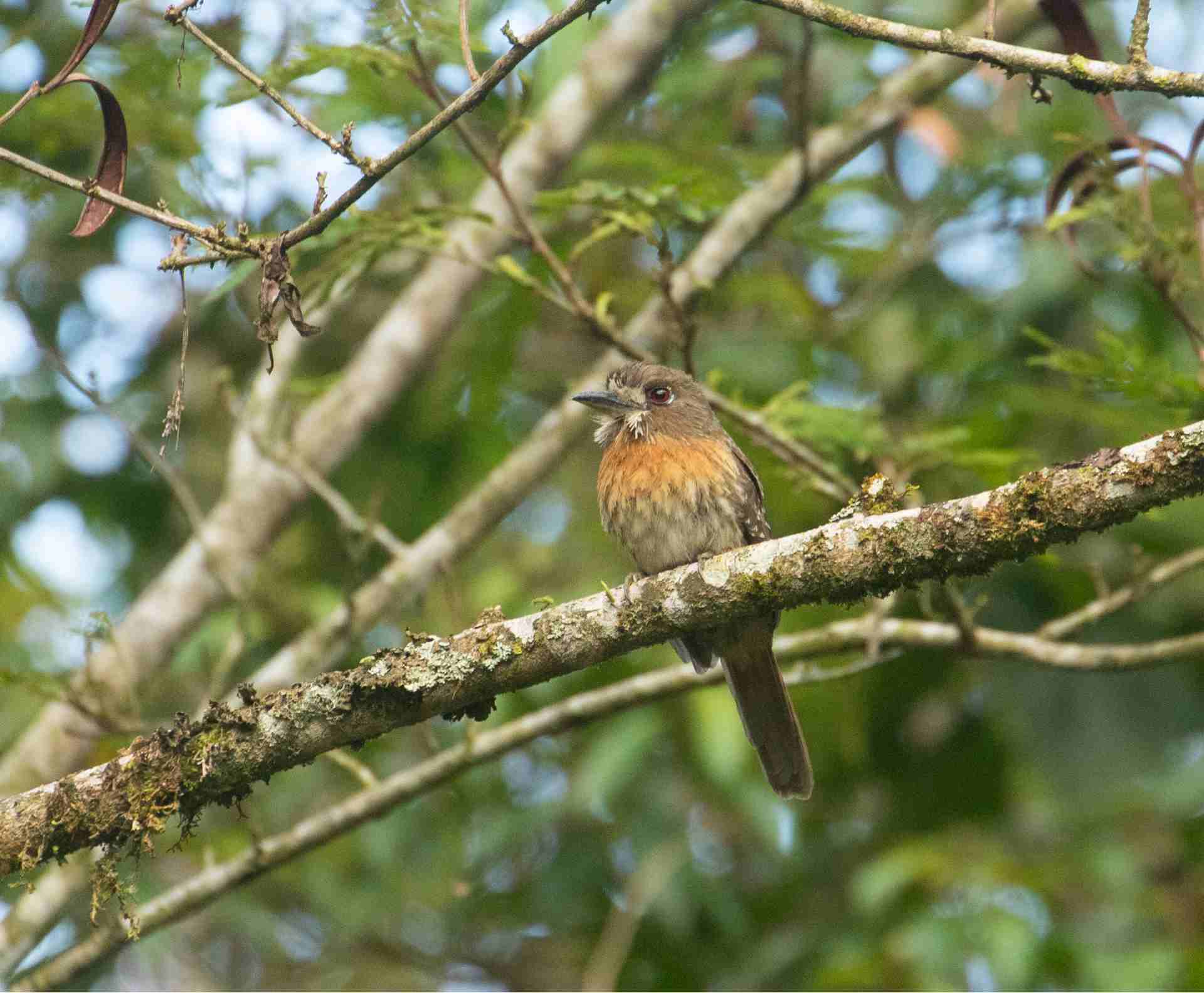 Regular sightings of Moustached Puffbird, a regional speciality found only in the Andes in Venezuela and Colombia, were enjoyed (Sam Jones).

The wider landscape is highly fragmented, comprising of pieces of forest and cattle pastures. The farm itself was a former cattle ranch, but its new owners, the congenial Maria and Evelio, are in the early stages of setting up a permaculture farm. Formerly grazed fields are beginning to 'rewild' and are covered in successional scrub, and a small forest area on the property is gradually regrowing to its previous size. Indeed, a wider local movement of forest regeneration has seen many hectares of native tree replanting in the region, with a view to restoring their former glory.

My morning 'census' typically yielded around 65 species and focused on the edges of the forest tracts, rough grassland and rank vegetation in a small valley. These areas consistently produced the best variety, including typical birds of rank vegetation and grassland such as spinetails, saltators and various grassquits, seedeaters and sparrows, alongside other species more associated with gardens and forest edges, like tanagers and flycatchers. A small row of fruiting trees on one edge of the property were a constant hive of activity attracting streams of pigeons, barbets, thrushes, tyrannid flycatchers, tanagers and vireos.

The farm hosted just three of Colombia's endemic species. The ever-present Colombian Chachalacas (occasionally even attracting amorous attention from the resident cockerel when perched above the chicken pens!), Parker's Antbird and occasional marauding groups of Red-bellied Grackles. This was in addition to a couple of nice regional species, such as Moustached Puffbird and Black-headed Brushfinch. 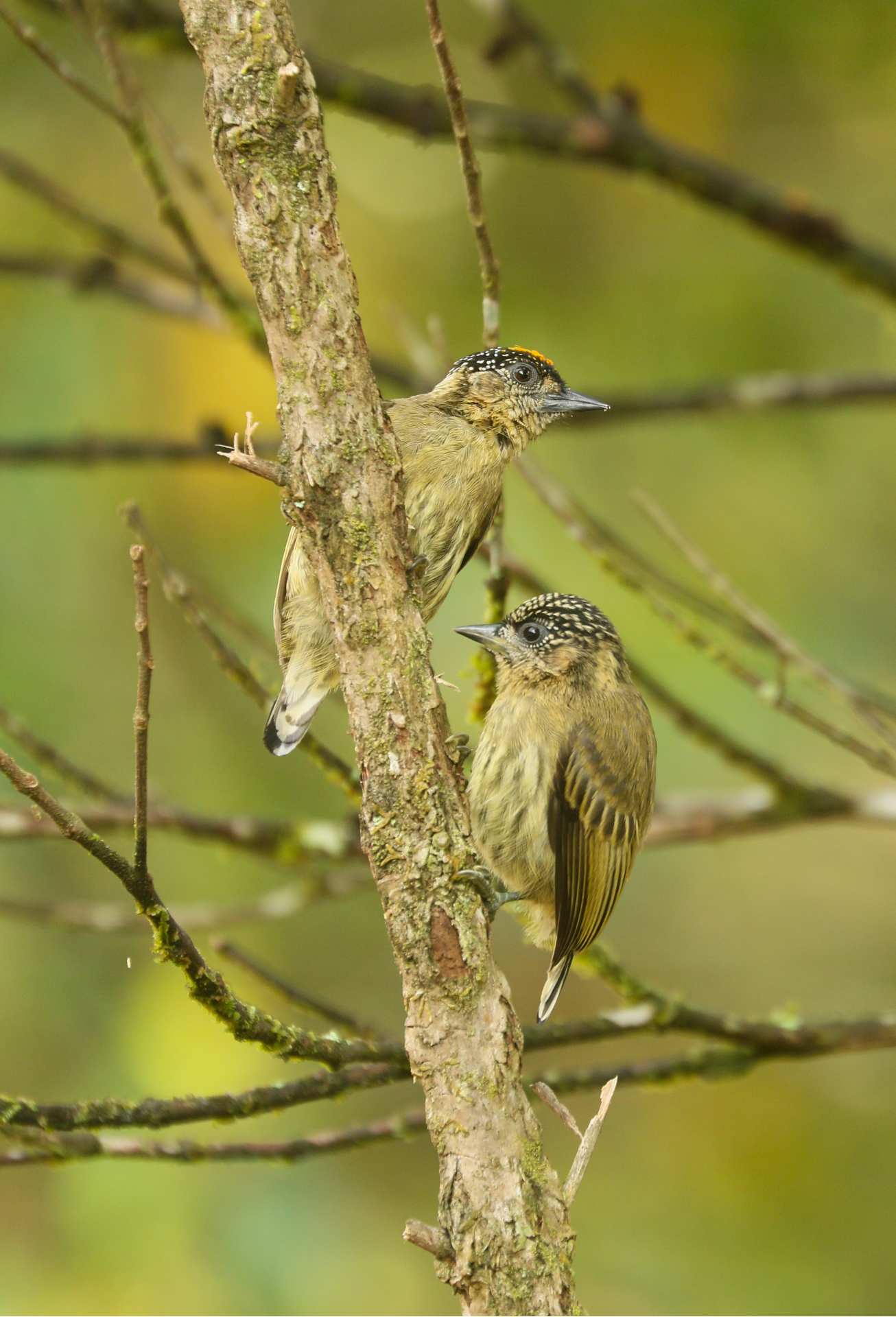 This adult (left) and juvenile Olivaceous Piculet were from one of two nests of the species located in the vicinity of the farm (Sam Jones).

I kept myself busy by marking territories of all the resident species for which I was able: two each of Russet-crowned Crake, Parker's Antbird, Sooty-headed Wren and Olivaceous Piculet, singles of Pale-edged Flycatcher, Rufous-browed Peppershrike, Slate-throated Whitestart, four Golden-faced Tyrannulet, singles of Buff-fronted Foliage-gleaner, Laughing Falcon and wider-ranging pairs of Bar-crested Antshrike, Blue-winged Mountain Tanager and Yellow-backed Oriole, to name just a few.

I documented nests of a handful of common species: a brood of House Wrens in a drainpipe, Scarlet-rumped Tanager, Orange-bellied Euphonia and the ornate nest of an Andean Emerald. Alongside the more sedentary species were regular fly-overs of Black Hawk-Eagle and regular dawn and dusk ‘commutes’ of species like Crested Oropendola, Scaled Pigeon and the occasional Giant Cowbird and Lesser Swallow-tailed Swift.

My stay on the farm conveniently coincided with the right time to catch both the 'resident' wintering Nearctic migrants, as well as birds en route to their breeding grounds. One of the most striking things that hit me on my first morning amble around my new patch was the songs of Swainson's Thrushes. There was an almost constant backdrop of audible zugunruhe as their ethereal jangles and soft blip calls filled every stretch of bushes as they gobbled their way through fruit trees in preparation for northbound migration. 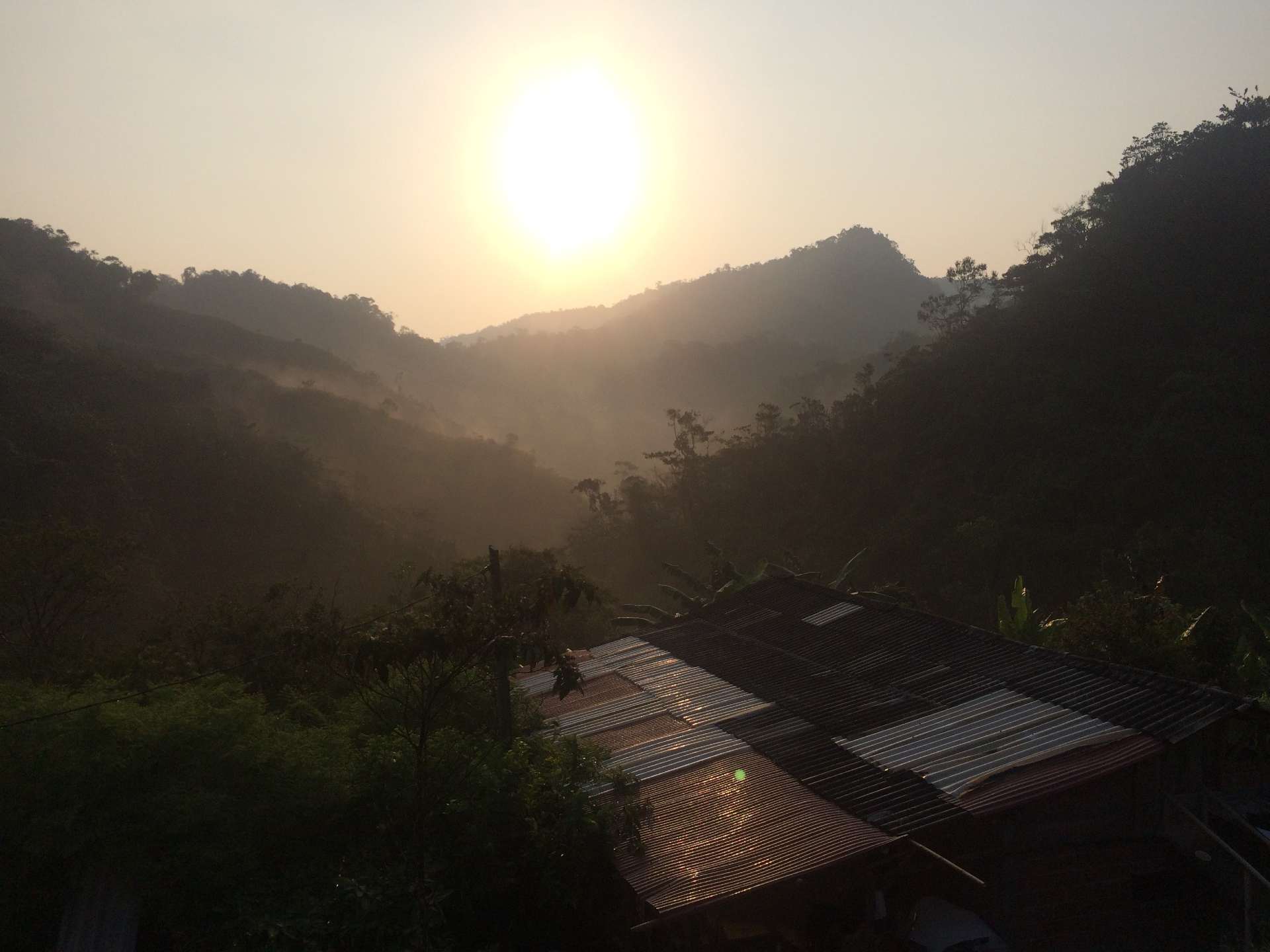 A former cattle ranch near Alejandría in Colombia's Antioquia Department, the smallholding is being transformed into a permaculture farm (Sam Jones)

Next most regular were Bay-breasted Warblers and Blackburnian Warblers, which gradually matured into full breeding finery as the weeks wore on. The patch hosted two Canada Warblers, the male frequently singing in the latter part of its stay, as well as a handful of Mourning Warblers and Tennessee Warblers, Red-eyed Vireo and Yellow-green Vireos and several Acadian Flycatchers.

Overhead, a handful of wintering Broad-winged Hawks were joined by (and perhaps departed with) some spectacular streams of raptors, with kettles of several thousands of this species, as well as Swainson's Hawks and Turkey Vultures, passing over rapidly in favourable passage conditions. 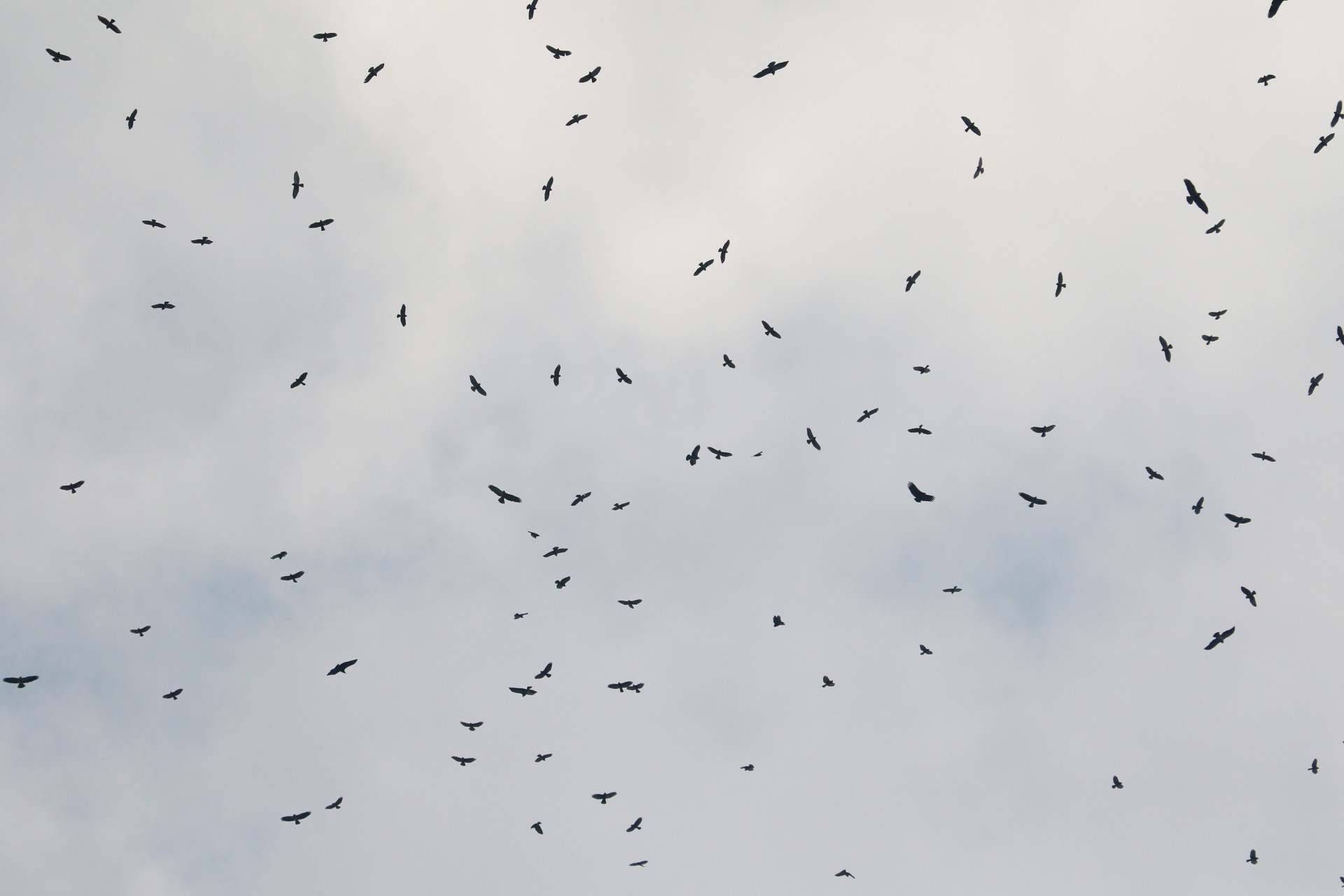 On some days, Broad-winged and Swainson's Hawks migrated overhead in their thousands (Sam Jones).

Because of the timing of my visit, the turnover of species was also notable. As April wore on the Swainson's Thrushes departed, replaced by a small wave of Grey-cheeked Thrushes, presumably staging from wintering grounds further south. The wintering Acadian Flycatchers were soon joined by a pulse of their Empidonax and Contopus cousins, as Willow Flycatchers flicked around the forest edges to a backdrop of the cheerful whistles of Eastern Wood Pewees. 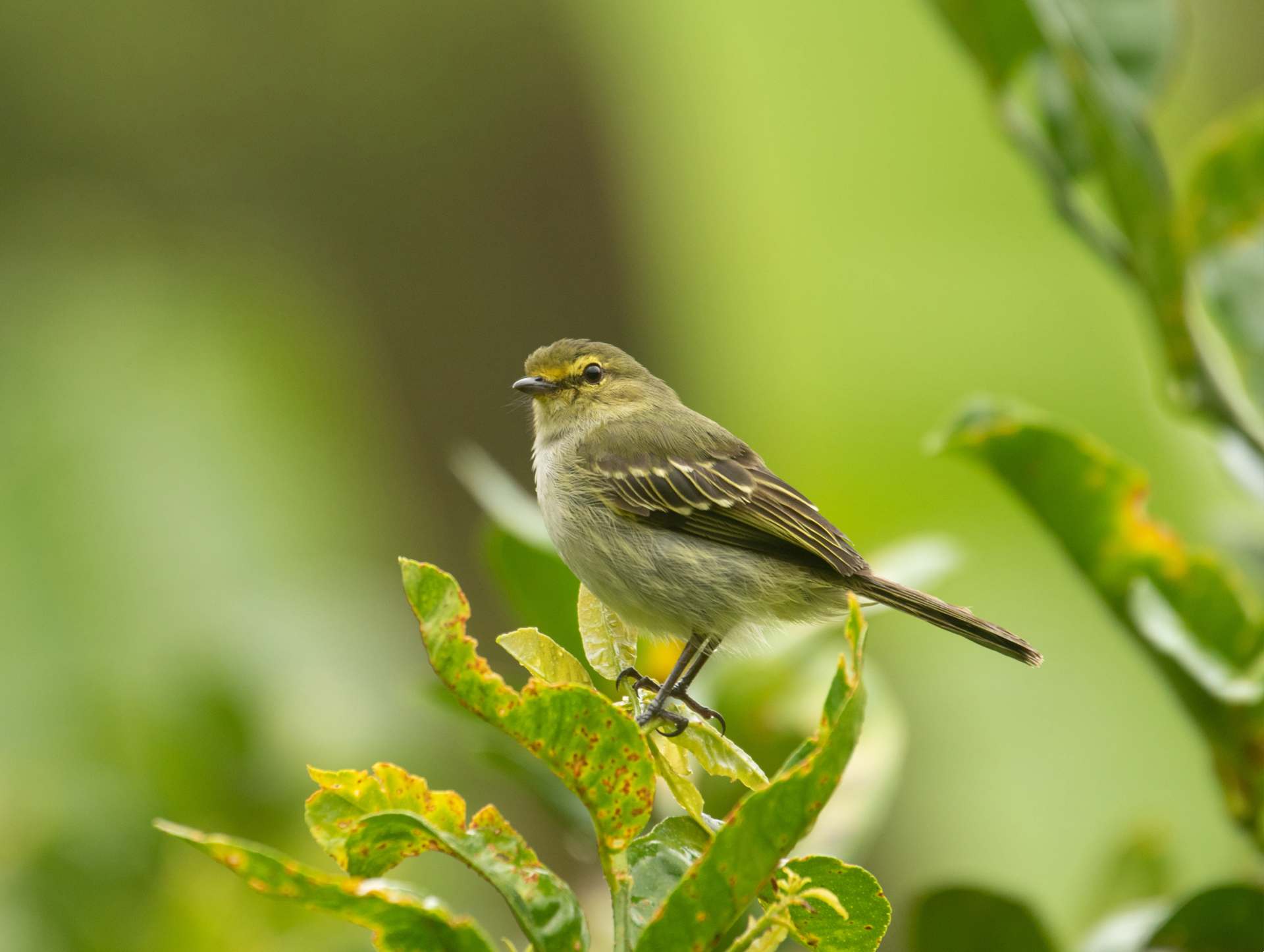 Golden-faced Tyrannulet was a daily sighting around the farm (Sam Jones).

The middle of April brought the first Eastern Kingbirds, with a group of five of these gaudy flycatchers in the canopy of a forest area on an adjacent hillside. Soon after, they were a daily occurrence, with groups moving overhead or occasionally stopping to forage from the treetops. Coupled with a handful of migrants such as Northern Waterthrush, American Yellow Warbler, Rose-breasted Grosbeak and Summer Tanager, presumably on passage, it made for superb and varied birding to combine with the residents.

There are few more acute reminders of the sheer feat of migration than seeing 'our' migratory northern hemisphere birds on their winter quarters rubbing shoulders with their tropical cousins. The mind boggles at the distances many of these individuals have covered, swapping their wintering quarters in the Amazon basin or the cloudforests of the Andes to the spruce forests of Canada. Indeed, the irony was not lost on me in seeing species migrating freely back to their respective 'homes' while I, a foreigner who came to see birds, was rooted to the spot.

It wouldn't be a patch if there weren't the 'ones that got away'. One morning I thought I had struck gold with a peculiar Cranioleuca spinetail that displayed traits of two different species. A hybrid? The unthinkable of a new species? Neither, but it did take three days of tracking down to discover that in fact my mystery bird was an aberrant or extreme variation of Red-faced Spinetail, one of a territorial pair. Towards the end of my stay, an unidentified Ammodramus sparrow seen briefly on two occasions – either Grassland Sparrow or Grasshopper Sparrow – left me wanting more. Either species would be a notable record for the location. 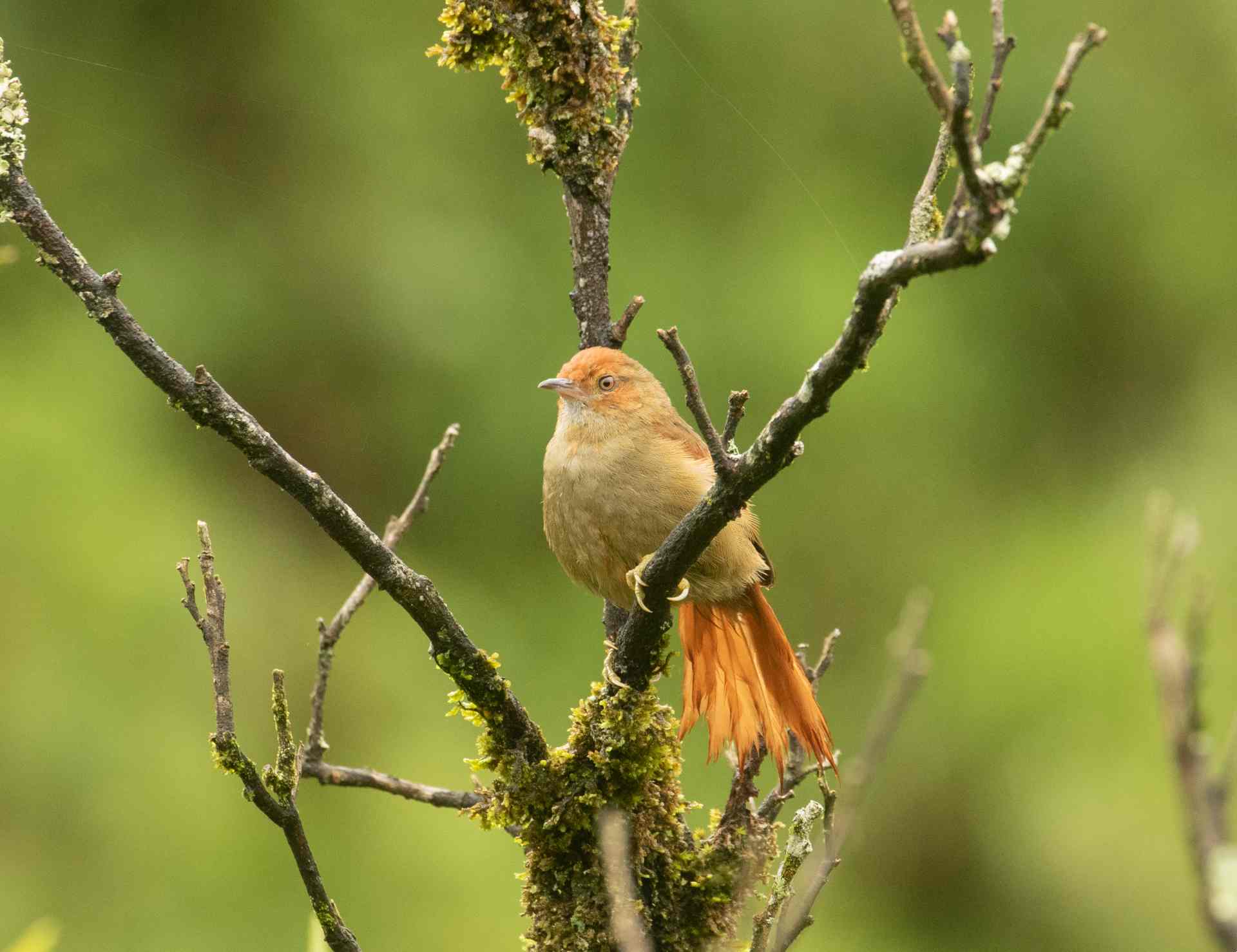 After seven weeks I eventually closed my account with just shy of 140 species – a respectable total I felt considering the small area. A further handful of birds in the immediate vicinity stubbornly remained absent from my adopted recording area, perhaps the best of which was a superb Aplomado Falcon giving point-blank views no fewer than 100 m from my patch boundary.

As any keen patchwatcher knows, cryptic species, rarities and the general ebbs and flows of life are always best observed by consistent coverage of the same area. Considering the many unknowns in our understanding of the basic ecology and distribution of tropical birds, one can only imagine the discoveries that await dedicated patchwatching efforts in so many of the world's avian paradises.