"So, here is today's schedule. We are going to start up on the ridge, where hopefully we shall see migrating raptors, particularly European Honey Buzzards. On the way down, we stop at a bridge over a gorge, where we should get Eurasian Crag Martin and maybe Alpine Swift, with a chance of both Common Rock and Blue Rock Thrushes. Then we drive down to the coast, and for the rest of the morning we will search the salt pans, where we will definitely see flamingos and various waders. We will give ourselves plenty of time to sort through them, and then it's back to the village for wine tasting."

Wine tasting? Now there is no denying that there is a strong relationship between birding and booze. I myself have been known to celebrate with a fine malt whisky having seen a rare bird. Come to think of it, I would console myself the same way if I didn't see the bird, and of course it is almost obligatory to end a day's birding down the pub. But wine tasting was a new one on me.

I have seen adverts for dual-interest holidays, such as 'birds and opera', or 'birds and architecture'. The group I was with were in pursuit of 'birds and wine' Or vice versa. I'm sure it won't surprise you to learn that we were in Languedoc, one of the major grape-growing areas in France, and indeed the world. Admittedly, this does result in a certain amount of monoculture. There were times when – whatever direction we looked – there were nothing but vineyards. 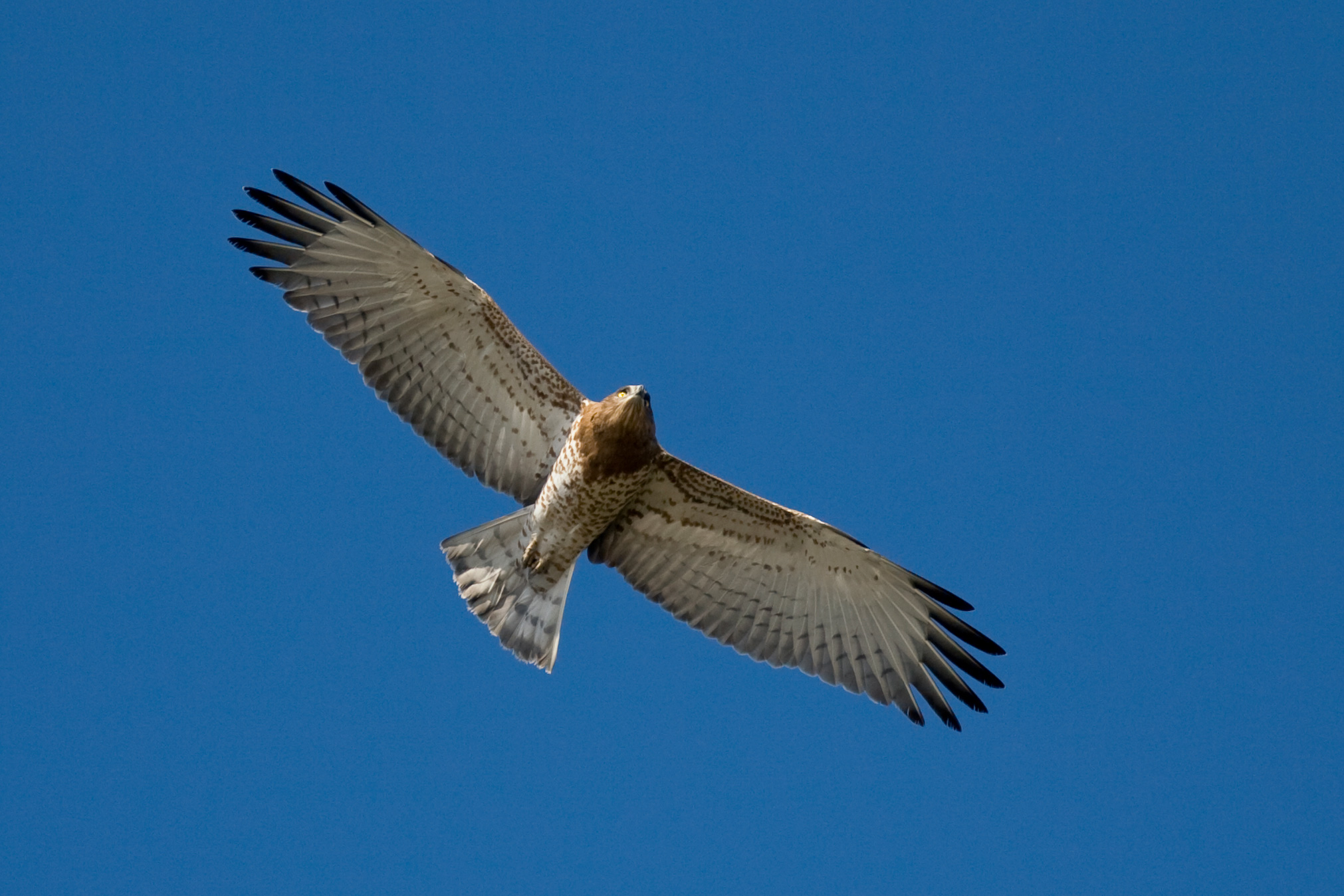 Short-toed Snake Eagle is among the range of raptors found across the region (Birdwatching Narbonnaise).

At a glance, it looked as if it might be as unproductive a habitat as the Palm Oil plantations of South-East Asia. They are all green and leafy, but wildlife really doesn't like them. However, vineyards offer an extra facility for birds. The plants are supported by sticks and surrounded by fences, some of which are electric, but all of which make ideal perches. Woodchat Shrike, Black-eared Wheatear, Whinchat, European Stonechat and the occasional Little Owl do not habitually spread their legs wide enough to make a contact and electrocute themselves, and they just love posing on posts. 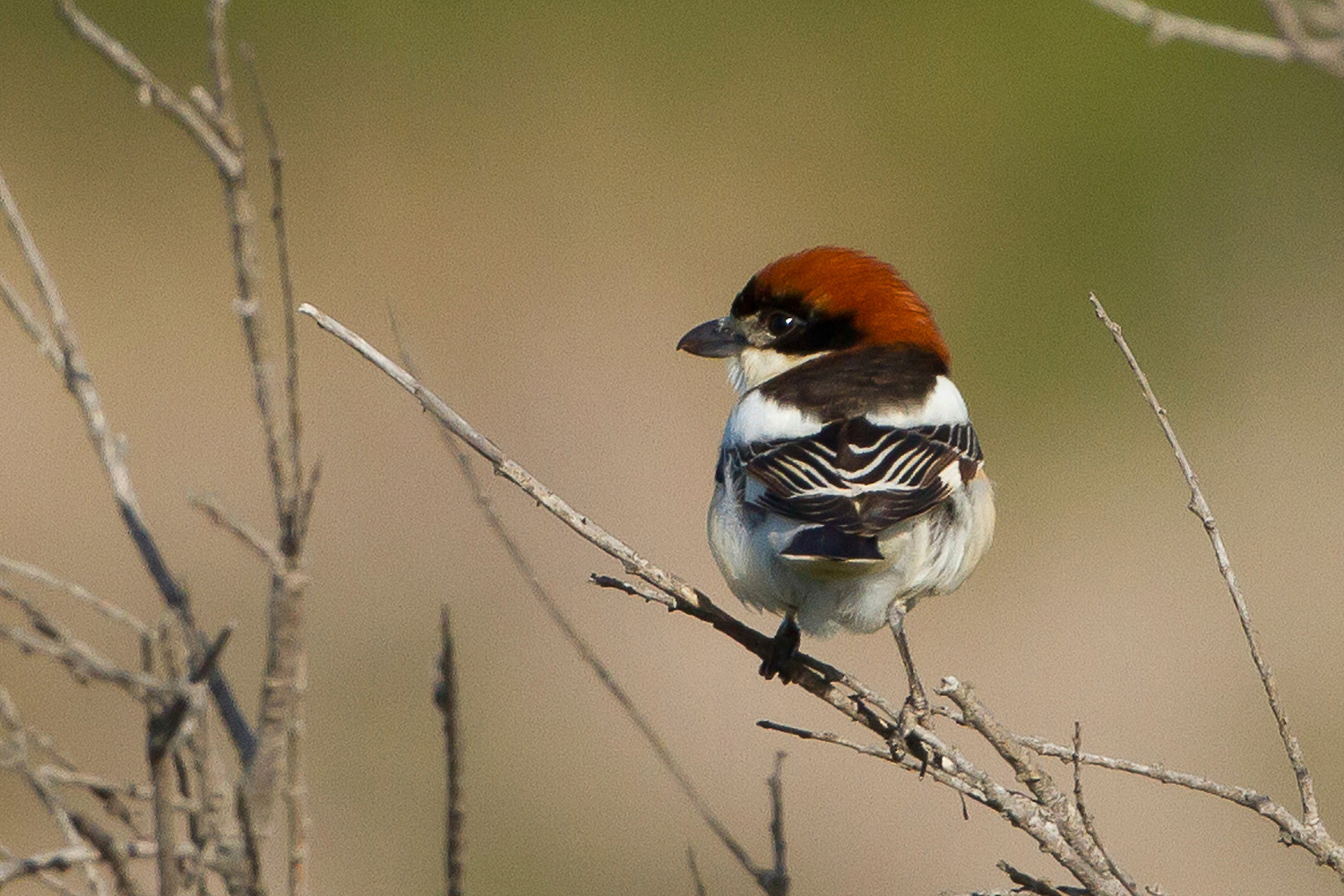 Between the rows of vines is a veritable labyrinth of electricity-free furrows, where birds that like to scuttle and flit can play hide and seek with birders. We saw Crested and Thekla Larks, European Serin, the occasional Hoopoe and the ubiquitous Goldfinches, whose tinkling immediately reminded me of home. But not so forcibly as a species that is just as numerous in this part of France as Goldfinches are in Britain. It is also a quintessentially British bird – or rather it used to be, and maybe will be again.

In Languedoc, though, wherever we went – day or night, inside or out, through our car window, or whenever we stopped for a walk, in woodland, wetland, streets, parks and gardens – we were accompanied by the songs of countless Common Nightingales. Several times, we watched one trilling away, oblivious to its audience. This begged an obvious question. If Common Nightingales are so numerous in Languedoc – and indeed in most of France and several other continental regions – why is Britain one of the few countries from where they are almost absent? Are we being punished for Brexit? We would deserve that I suppose, but seriously though, it is puzzling, rather worrying and perhaps a wee bit controversial.

It is clear that Continental nightingales are not particularly fussy about habitat. They seem happy more or less anywhere. And yet the small – and getting smaller – British population is seemingly only comfortable in a certain type of scrubland, with a few bushy trees, preferably with a nearby visitor centre with an information board dedicated to them, with a plea to "help us save the Common Nightingale". But what if they don't need saving?

There is a theory that some birds become more fussy on the edge of their range. A rough translation of this is that there are species that don't really belong in Britain, but a few of them have spilt over from a more crowded Europe where dwindling habitat has forced – or inspired – them to seek pastures new. Unfortunately, once they have crossed the channel, they seem to get awfully picky. They could consider spreading west, but it wouldn't be long before they fell into the Atlantic. Common Nightingale is therefore said to have a 'limited range'.

So does Red-backed Shrike. Never in my lifetime has this species been common in Britain, and the pair or two that hung on were restricted to a few pretty well-known locations with the supposedly essential habitat of gorse and thick hedges, with hawthorn bushes with spikey skewers for their larders. Unarguably a 'specialist breeder'. In Britain that is, but not in many other European countries. In France, I have watched Red-backed Shrikes happily hunting and feeding young on a rubbish tip. Driving through Armenia, every fence and power line was a shrike perch. During one very brief comfort stop, I counted six males without breaking the flow, as it were.

However, in Languedoc – and most of southern Europe – the Red-backs have been replaced by Woodchats. This is a species that is yet to breed in Britain, but it may not be long before it follows in the wake of other southern adventurers such as Little and Great Egrets, Glossy Ibis and other welcome immigrants.

However, I can't help wondering – and maybe you do too – if Common Nightingales and Red-backed Shrikes have such healthy populations, why do we spend so much effort (and funds) trying to entice a few over here? Because the shrike is very handsome, and the nightingale has a fabulous song? Are these reasons enough perhaps? Plus the habitat management will almost certainly benefit other species. But if it doesn't? Well, this could lead to a heated debate. I won't go there. 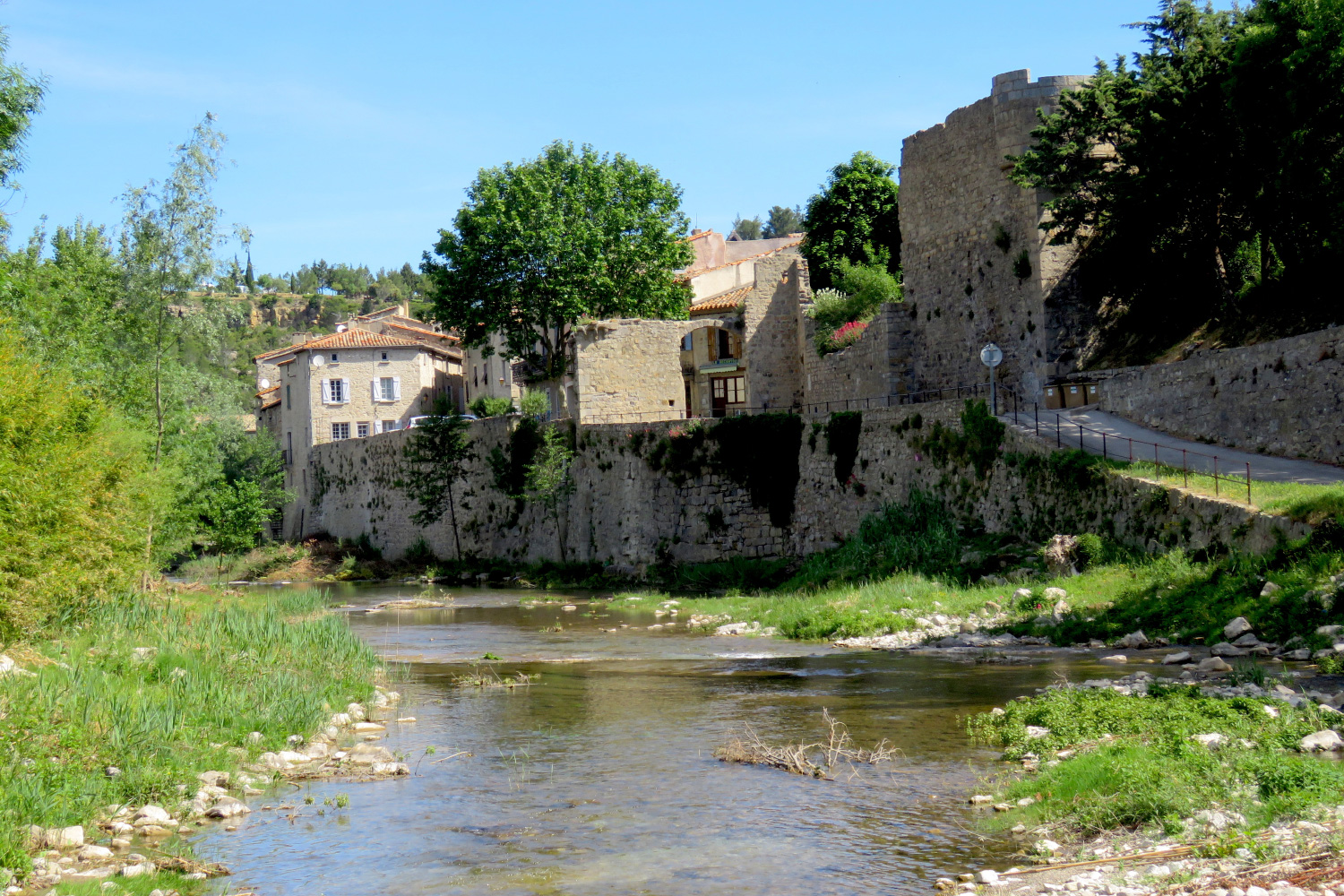 Great birding and wine tasting, combined with typically charming French scenery, made for a memorable trip.

I will go back to Languedoc. My visit was for a week in the middle of May. There were six of us in our party. We travelled in a smart minibus, following a planned route, but frequently pulling over to focus on a particular bird, or on a distant kettle of circling raptors, as well roadside wildflowers and butterflies, both of which were profuse and handsome. My recently acquired increasingly dodgy knee means I have to constantly watch where I am putting my feet, which rather limits the view when I ought to be scanning almost vertically upwards.

I fell over once, but by the end of the week we had a pretty decent raptor list: Honey and Common Buzzards, Black Kite, Eurasian Sparrowhawk, Common and Lesser Kestrels, Eurasian Hobby, Montagu&#39;s and Marsh Harriers, Griffon Vulture, Golden Eagle and Bearded Vulture (a local rarity) Naturally, we celebrated by having another wine tasting.

This area is not famous for birds, though it is certainly becoming so. It may never be a destination for hardline twitchers and rarity-hunters, but I don't think any birder could fail to be satisfied by a five-minute spell in which we saw Purple Heron, Great Spotted Cuckoo, Golden Oriole, Montagu's Harrier, male Little Bustard, and – a bittersweet moment – a European Turtle Dove purring in the nearby copse. Now there's a bird that needs our help. I'll drink to that. I fancy trying some crisp little whites: nice approachable body, cleanses the palate and caresses the tongue. Salut! 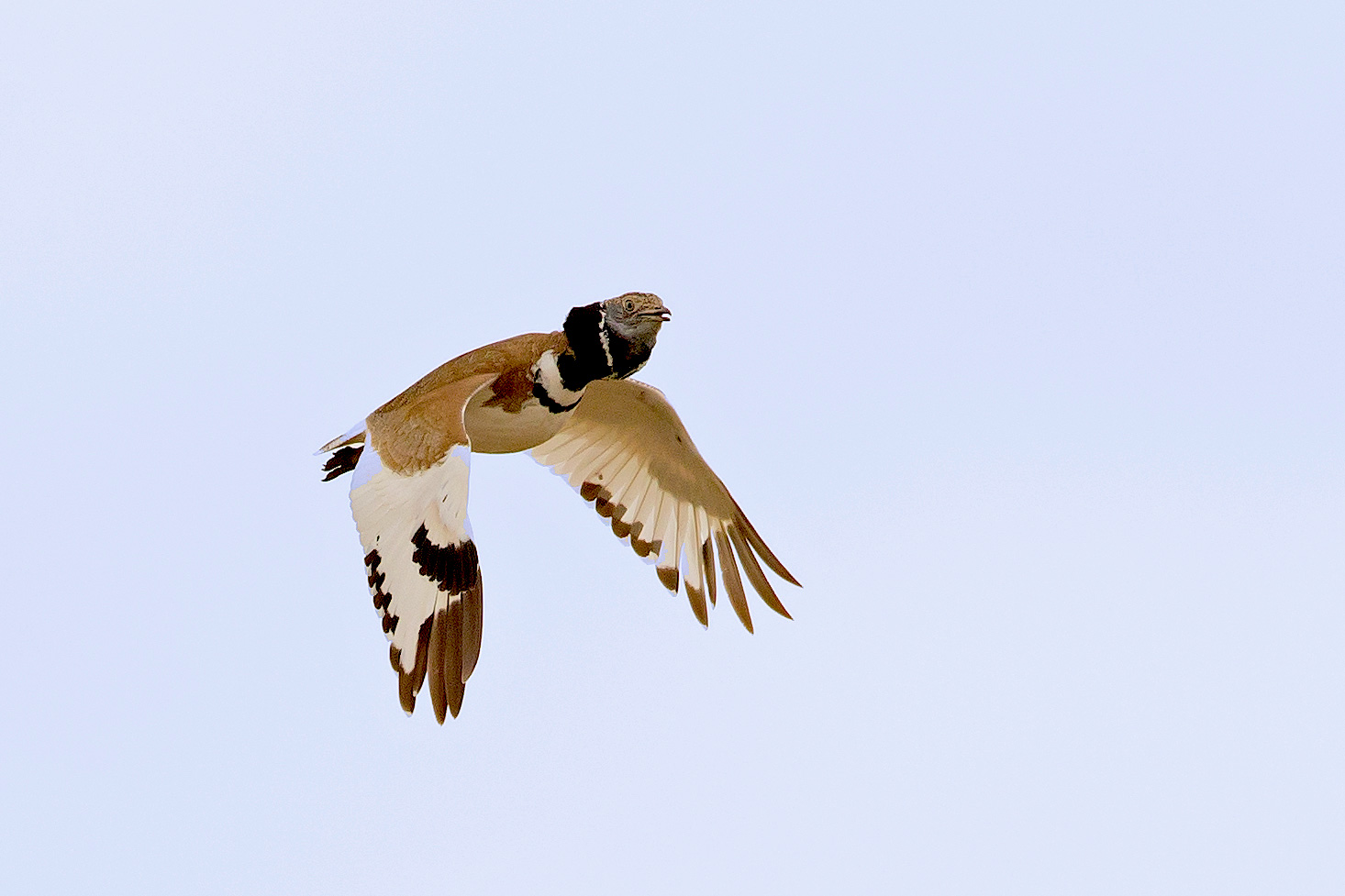 The grasslands can produce the enigmatic Little Bustard (Birdwatching Narbonnaise).

Bill Oddie travelled to France with Birdwatching Narbonnaise on behalf of Birdwatch magazine.

For a downloadable guide to the area: bit.ly/bw307BirdingNarbonnaise.