With spring progressing quickly, many of us routinely attempt to reacquaint ourselves with those long-forgotten summer visitors from last year. One of the earlier migrants to arrive, from mid-March onwards, is the Little Ringed Plover. Little Ringed Plovers are polytypic, the race curonicus occurs across most of the species' range in Eurasia from Scandinavia, Britain, and north-west Africa east to northern China, Korea, and Japan. It is difficult to believe that this endearing wader is a recent colonist to our shores. Breeding took place for the first time as recently as 1938, when a pair raised three young at Tring Reservoirs in Hertfordshire. Amazingly there were just 13 records prior to 1937! Nowadays the species is a widespread, albeit scarce, summer visitor with a breeding population of between 825 and 1,070 pairs, most of which are found on gravel pits, sand quarries, sewage farms and reservoirs. However, it is still a scarce visitor to certain regions, with, for example, just nine records for Shetland and just over 40 for the Isles of Scilly. 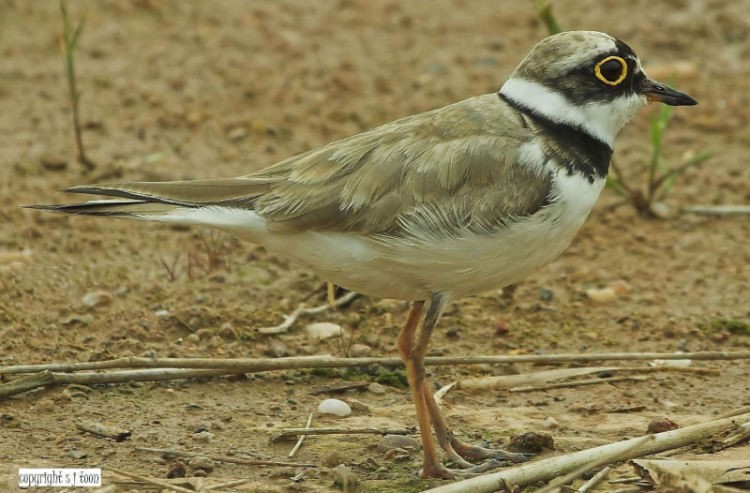 The similar Ringed Plover can be found around our coastline, and there is a small inland breeding population which is increasing. Ringed Plovers are polytypic, with the nominate hiaticula found in northwest Europe from southern Scandinavia and the Baltic south to France and west to Iceland, and Spitsbergen, Greenland, and eastern coasts of Ellesmere and Baffin Islands in Canada. Birds of the smaller, darker, race tundrae breed in northern Fennoscandia and Russia; small numbers of this race pass through eastern counties at migration times. The UK breeding population is estimated to be 8,600 pairs. 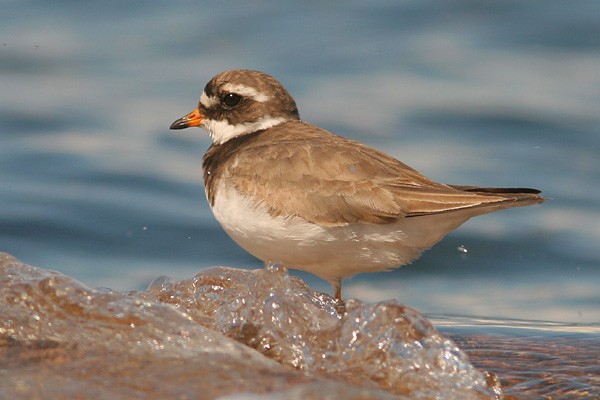 Although some observers might use habitat as a useful indicator, it's not always failsafe. True, Little Ringed Plovers do not tend to frequent coastal beaches in small flocks, but Ringed Plovers can be found on all sorts of inland habitat, so habitat works better at the coast as an initial pointer to ID!

At distance, Little Ringed Plover is the smaller of the two, appearing daintier than the rather dumpy-looking Ringed Plover. The rear of Little Ringed is noticeably attenuated, a useful feature for trying to suss out distant birds. As with all subtle features between species, these are best appreciated when watching both species side-by-side. Additional features at range include the thinner breast band of Little Ringed.

In flight, Little Ringed Plover completely lacks a wing bar, though on close views a faint wing bar can be detected, unlike the conspicuous wing bar of Ringed. Also, in flight both species can be heard to call, Little Ringed giving a distinctive short, down-slurred, 'te-eu' compared to the disyllabic 'poo-ip' of Ringed Plover.

Something a bit rarer?

Amongst groups of Ringed Plovers it is always worth searching for Kentish Plovers. Formerly a rare breeding visitor to Britain, this fine wader is now a scarce passage migrant, the majority of which are overshoots to the coastline of the southeast. Numbers vary from year-to-year, with an average of 36 reported during the 1990s, ranging from 19 in 1997 to 59 in 1993.

Jizz-wise, Kentish have a short rear end, appear large-headed and, in size, are part-way between the two commoner species. Spring males are quite straightforward, with black bill and legs and neat black sides to the chest and on the head. A rusty-coloured nape adds to the attractiveness of this species. Females are drabber, with greyish-brown chest and head markings, the latter with very little, or no, rufous tone to it. In flight, the tail sides are conspicuously white, and the wing bar is narrower than that of Ringed Plover. The flight-call is a short 'bip', or 'bipip'. 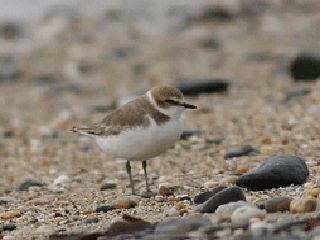 Kentish Plover: Cornwall Females are less obvious, but have a different shape with a short rear end. The patches at the breast sides are restricted and bare-part coloration generally blackish. (photo: Mike Barker).