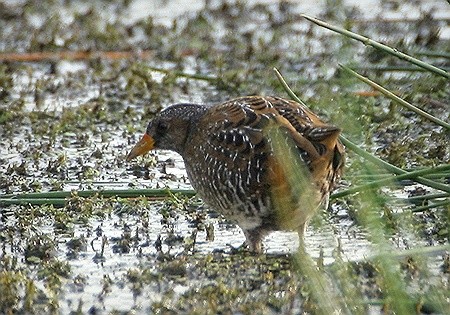 Spotted Crake: W. Yorks Spotted Crakes are smaller and shorter than Water Rails, with which they can sometimes be confused by the unwary. They are easily separated by the short straight bill, greenish legs and usually buff undertail coverts. (photo: Sean Gray).

Spotted Crakes have always held a special appeal for me. Despite being fortunate enough to have spring passage birds, and occasional breeding birds, calling on my doorstep in the Lower Derwent Valley NNR in Yorkshire it is a species with which I still don't feel that I can claim any degree of familiarity. With their secretive habits, and retiring nature, my local birds are virtually impossible to see in the flood meadows of this huge nature reserve, so it is showy autumn individuals elsewhere which I, all too infrequently, have to enjoy. 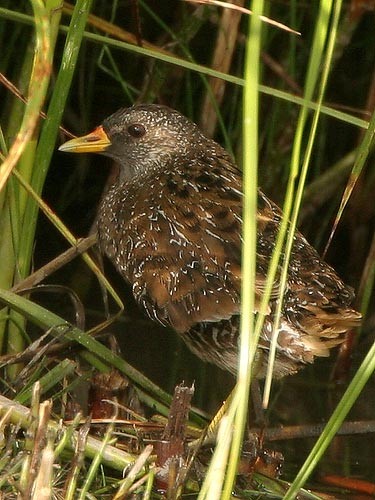 Spotted Crake: Cheshire Given a good view the only potential confusion species is the rare Nearctic Sora. In all plumages though Sora lacks the spots on the head, neck and breast, plus it has a dark central median crown-stripe and has dark tertials with pale edges, unlike Spotted Crake which has obvious transverse white bars on the tertials. (photo: Steve Round).

Although Spotted Crakes are scarce, not rare, visitors to our shores they are infrequent enough to capture the interest of many observers; a long-staying individual is always capable of drawing a crowd. The British breeding population is small, its reported number prone to fluctuation, or more likely observer effort. Such birds offer little, or no, opportunity for observation as it is only the monotonous whiplash call that betrays their presence during the still spring and early summer nights. A national census in 1999 found there to be birds present at 40 British sites, with between 53 and 73 pairs/singing males, the results revealing a greater number than previously suspected. Doubtless many more birds pass the summers undetected in remote damp meadows away from the keen ears of those intently searching for their presence.

The British breeding population forms a very small part of the European population of between 50,000 and 180,000 pairs, which must, at best, be interpreted as a vague estimate for this secretive species. The wintering grounds lie in Africa, southern Europe, the Middle East and southern Asia, though sporadic wintering records are noted in Britain; for example the Winter Atlas reported 15 birds in the early 1980s. 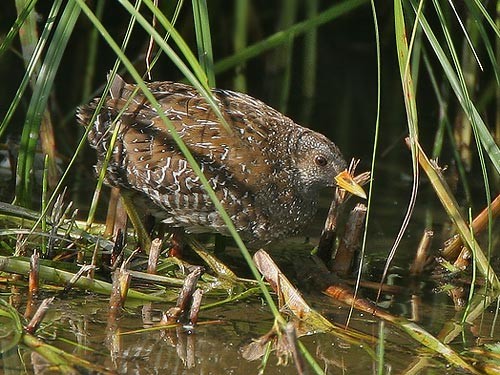 Spotted Crake: Cheshire The secretive nature of the species ensures that views often tend to be brief amongst the vegetation, though low water levels and muddy margins often tempt birds out of the reeds and views can sometimes be exceptionally good. (photo: Steve Round).

It is as a passage migrant with which most of us are familiar with this skulking crake, more usually during the autumn months when water levels are lower allowing observers to pick out birds straying from their reedy habitat. During the 1990s there was an average of nearly 60 per year, though in 1995, a year of low water levels, 117 were reported. 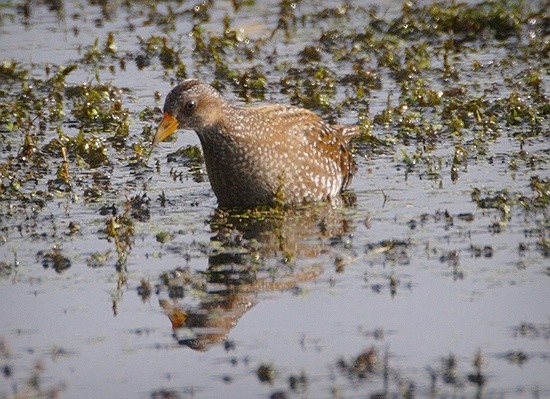 Spotted Crake: W. Yorks A few birds do tend to be exhibitionists, straying from cover and feeding in the open. Such privileged encounters allow for prolonged views and appreciation of the complicated feather patterning. (photo: Sean Gray).

Where to see Spotted Crakes

The number of birds seen varies from year to year, some years providing better conditions than others with lower water levels presumably making detection of migrants easier. Birds can turn up on any pond or ditch, and the number seen presumably only represent a small proportion of those that actually pass through the country. However, certain sites have a reputation for attracting the species, and the following have accommodated birds during at least three of the last five autumns: 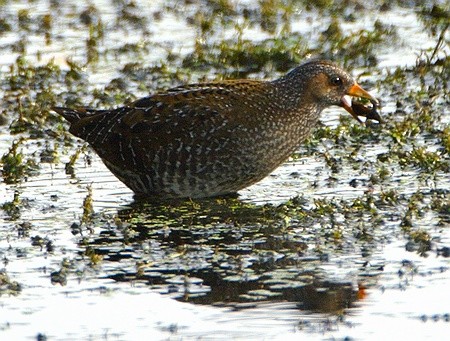