Focus On: Robins of the north

With Christmas not far behind us, I hope to give you a different take on the bird of the season. This small chat has an endearing quality that makes it difficult even for British birders, who see them every day, to tire of them. The 'gardener's friend' also has a Continental cousin, though, which in escaping harsher conditions north and east, regularly winters in Britain, though largely unnoticed. 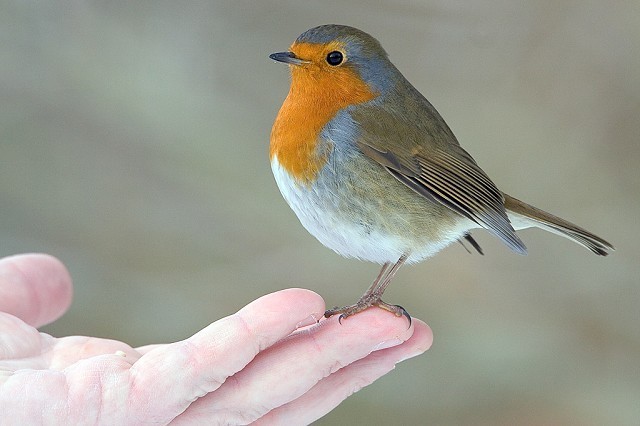 I was first inspired by Robin movements and variety by Wallace's maps and arrows in Bird Watching magazine 25 years ago. This dormant interest was reawakened on visiting Chris Murphy's Northern Ireland garden in winter 1998. Backing onto a bird-filled woodland, a magnet for Crossbills, redpolls and the Irish Jay (ssp. hibernicus), it was always worth a look. On this occasion there were reports of Mealy Redpolls in with the local Lessers. I eventually managed to see two or three Mealies, when a pale Robin caught my eye. I told Chris I thought he had a 'Continental Robin' visiting his garden. Curiosity aroused, he watched the bird, alongside eight other 'British Robins' for several days. In the spring, he visited Sweden and, on his return, reported that his pale Robin was identical to many he'd seen there. A check of the Irish Bird List indicated that there was circumstantial evidence of their occurrence, but that there were no confirmed records of Continental Robin in Ireland. I think they were occurring, as evidenced by the bird in Chris's garden, just presumably, and understandably, overlooked.

There are three subspecies of Robin that concern us here: the British Robin (ssp. melophilus), the Continental Robin (nominate subspecies rubecula) and the Russian Robin (ssp. tataricus). It is always vital in developing skill in identifying races to get to know the plumages and movement of the local form first. I soon realised how embarrassingly little I knew about the specific colours of the plumage tracts of a bird I saw all the time. It is also important to approach this as a careful learning curve, rather than a quick grasp at a few new characters.

Time of year and plumage tones

Adult Robins have one complete post-breeding moult per year, hence autumn birds are in fresh, darker fully saturated plumage. Spring birds will have older, paler and more worn plumage. Females average very slightly paler on the breast than males. First-winters average a little paler on the breast and upperparts than adults. Thus, while the differences are subtle, adult males in autumn are the darkest, and second-calendar-year females in spring are the palest.

Although not always possible, it can be useful to attempt to age birds in the field, most easily achieved with birds in fresh autumn plumage. All ages can have pale thorn-shaped tips to the greater coverts (giving an open wing bar), but the tips on adults are smaller, slightly darker orange and less obvious. On first-winters, the buff tips tend to be large and pale, almost a round-bottomed triangle on the middle and outer greater covets. Adults also have more rounded tips to the tail feathers, which come to a tapered point on first-winters (see Svensson 1992 and BWP for more details). Of particular note is that first-winter females often have no blue-grey in the forecrown, which is usually present in other plumages (per BWP). 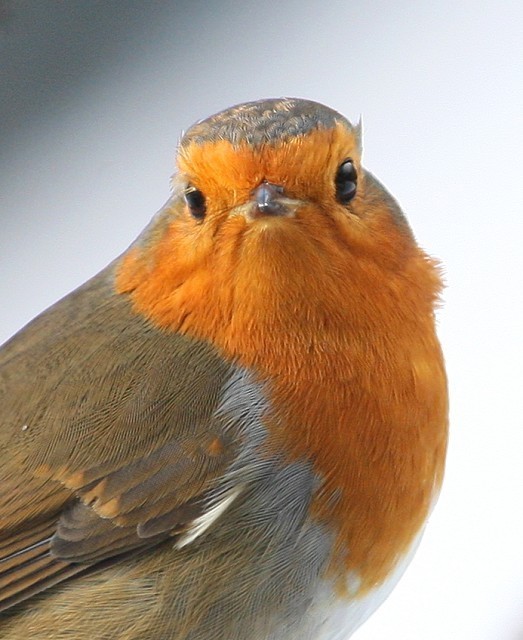 It needs to be stated that plumage tones vary within each subspecies to a slight degree and plumage differences are clinal, without sharp boundaries between them. So, for example, birds in a line southwest from Denmark to Southern Iberia appear somewhat intermediate between melophilus and rubecula.

Robins are mainly nocturnal migrants, and knowing migration timings of different subspecies can help in their detection. Males are on average more sedentary and females more migratory. Thus first-winter females have perhaps the greatest migration vagrancy potential and can be some of the palest and most interesting robins to find.

Largely resident in Britain and Ireland, though some (fewer than 5% of females and only a few males) migrate SSW at least as far as Southern Iberia, mostly wintering within 500km of the coast. 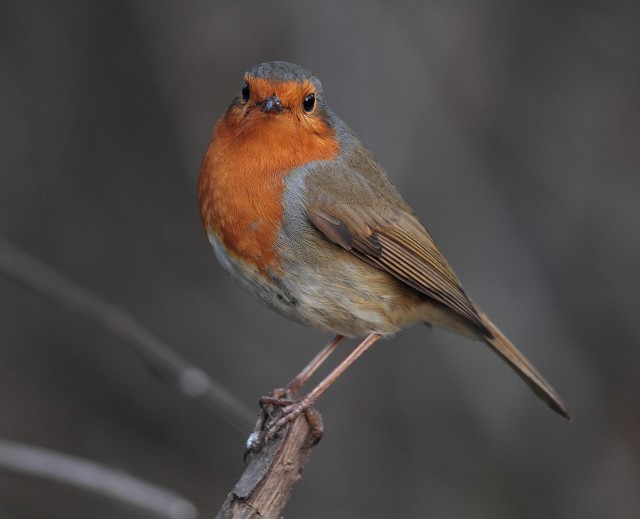 Described as 'addicted to human habitation', they are usually much bolder and responsive to being 'pished out'. Typical features to note in fresh plumage are: 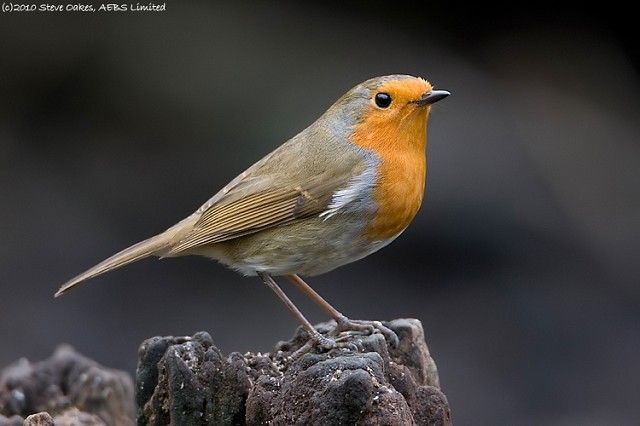 The Continental Robins that breed in Northern Europe have to escape harsh cold winters, so most of the birds that breed from Scandinavia (in the north) and Germany (in central Europe) eastwards are migrants. Furthermore, the warming effect of the Gulf Stream means that many birds tend to head west and south to winter in Iberia, northwest Africa and the western Mediterranean. The first Continental Robins occurring in Britain were recognized as such by Harry Witherby (who co-authored the wonderful 'Handbook') in Holkham (Norfolk) in 1905 and at Spurn (East Yorkshire) in 1909. It is now well known that from about mid-September to late November Continental Robins pass along the east coast of Britain in small numbers and some can be found inland, even staying on to winter. In the right conditions, which usually involves easterly winds and rain, large falls of Continental Robins can occur, which can be quite spectacular. Notable counts, for example, include 500 on Blakeney Point (Norfolk) on 23rd November 1955, 1000 in the Sheringham area (Norfolk) on 25th September 1976, 1000 at Spurn on 29th Oct 1976 and an amazing 3000 at Holkham on 1st October 1998. In the spring, returning migrant Continental Robins can be recorded between mid-March and May, again most obviously on the east coast, but potentially anywhere that northeast-bound migrants pass through.

Ringing recoveries help to indicate potential occurrence patterns, and it is a reasonable assumption that for every ringed bird recorded there must be tens of birds undetected. So the fact that a number of ringed Continental Robins have been found wintering in inland Britain means that many more go undetected (e.g. several in my local area around Sheffield).

Continental Robins tend to be much wilder and more skulking than the British Robin. Typical features to note in fresh plumage are:

In spring even paler and greyer above and paler orange below, some second-calendar-year females apparently approaching tataricus. 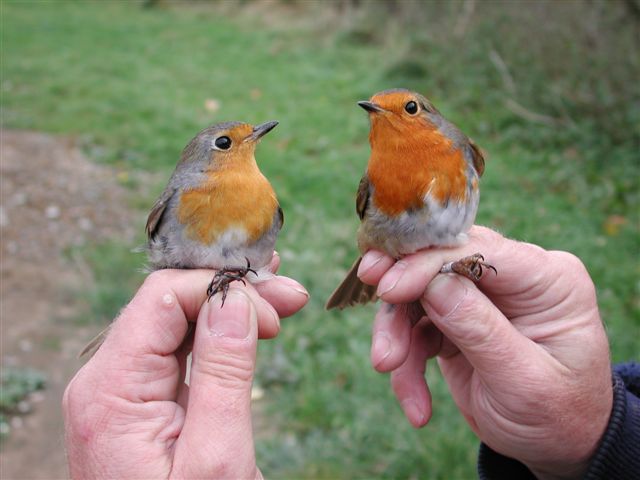 Totally migratory; birds from Siberia (east of the Urals) are apparently recorded in winter in southeast Kazakhstan and Iran but information is very limited. There is clear ringing evidence that some birds from Poland and Western Russia head west (and then presumably south) in autumn, with birds departing from the Urals in late September, but rarely leaving the Moscow area before mid-October (see BWP). The information is sparse and there is surely much more to learn on the movements of the easternmost Robins. It would appear from photo guides that some have even reached Japan.

Based on very limited data and still much to learn! Normally only birds east of the Urals are referred to as tataricus, but BWP indicates quite a marked decrease in plumage saturation (i.e. noticeably paler birds) from beyond Moscow. Typical features to note in fresh plumage are:

In spring, even paler and greyer above, sometimes bluish-grey and paler orange-yellow to yellow only in centre of bib on underparts. Apparently some second-calendar-year female Continental Robins can be similar.

I include this as an example of my learning about these things, not as any great claim! I spent the day at Flamborough with John McLoughlin and our best find was a Siberian Chiffchaff  — one of the only ones on the east coast that autumn — with an accompanying Chiffchaff, possibly a fulvescens-type bird. We also came across a particularly pale Robin, having already seen a number of birds, including some identifiable Continental Robins. This bird nevertheless stood out. The upperparts were paler olive, with no warm tones and often looking rather greyish-olive. The breast bib looked clearly pale orange, even yellow-orange, and the flanks were cold greyish with extensive white underparts. The bird had no blue-grey on the forecrown and was assumed to be a first-winter female. I wish I had had a camera with me!

Besides our Siberian Chiffchaff(s), Lanceolated Warbler and Olive-backed Pipit were also found in Britain that day and several Black-throated Thrushes arrived around the same period. All these birds had come from at least as far as the edge of the Urals, which at least raises the possibility that our distinctly pale Robin had come from the same area.

I found this bird in the famous Old Fall hedge. It was particularly striking in that the whole of the upperparts were cold and rather greyish or even slightly blue-grey, fitting well with Wallace’s claim of spring tataricus previously at Flamborough. I don’t think I’d seen a Robin like this before. The underparts were similarly pale orange and yellow. It could have been a tataricus or worn second-calendar-year female rubecula. An interesting bird. 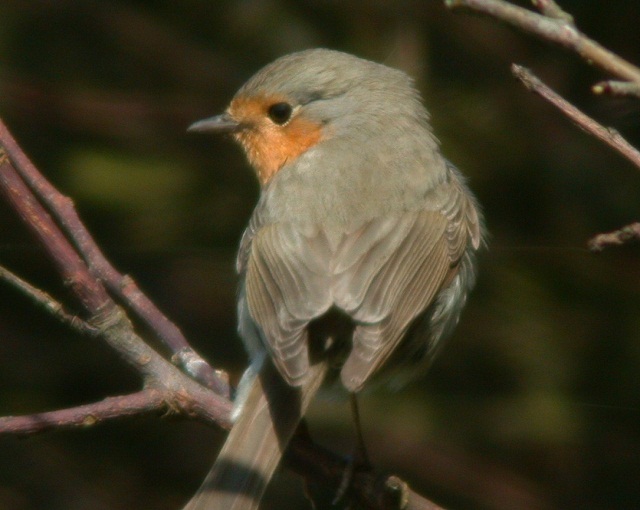 While out trying to find birds in late October 2009, I came across this individual out in the wilds of Ramsley. In bleak moorland, far from garden bird habitat, this individual quickly grabbed my attention as a possible Continental Robin. So I watched it closely, noting carefully the cold almost mossy-green upperparts with no trace of browner tones, no rusty bits on the side of the uppertail coverts and its yellow throat with a rather pale clean orange breast. It fitted my search image of young rubecula nicely. It also sported a metal ring. I contacted local ringer David Williamson, who informed me that they had been surprised by a catch of four first-winter Robins in that very area a couple of days earlier, which synchronised with a large arrival of Robins on the east coast. Very satisfying news! 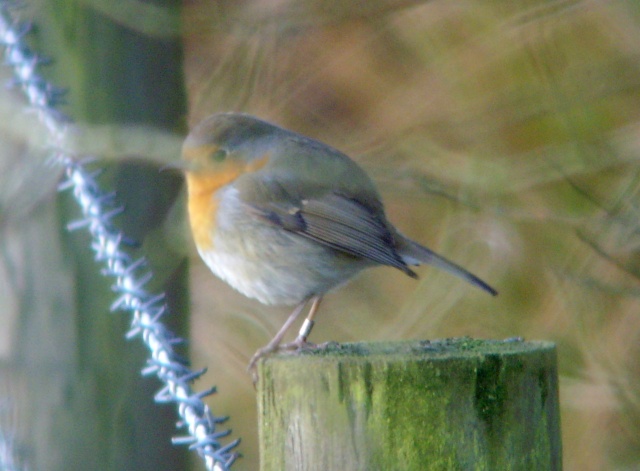 I am keen to hear from others on their experiences of identifying migrant and potentially vagrant Robins as I continue to learn! 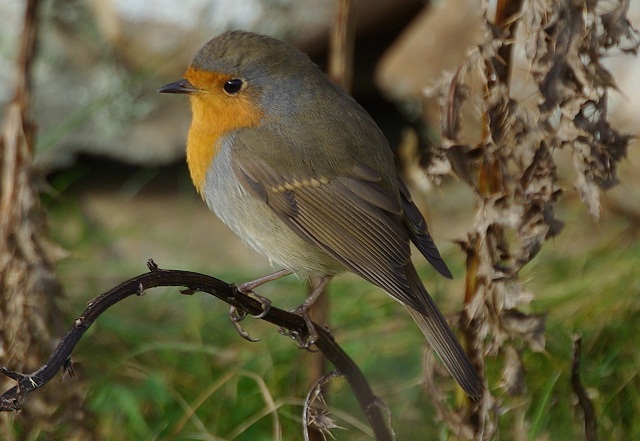