It's got to be a safe bet: Yelkouan Shearwater can occur in British and Irish waters. Scopoli's Shearwaters (the Cory's Shearwater of the Mediterranean) regularly leave the Mediterranean and have occurred off eastern North America, with good claims off the Scillies, west coast of Ireland, North Sea and the Baltic. Balearic Shearwaters occur every summer from late June around the UK and Ireland and some even occur in winter. That leaves one other 'Mediterranean' shearwater, only recently suspected of occurring around the British Isles, which has also been seen flying past Gibraltar and in the Atlantic off northwest Spain (Gutierrez 2004). It will require really good views, and preferably a photograph, but against the tide of opinion I think that Yelkouan Shearwaters CAN be identified away from the Mediterranean with a distinctive combination of plumage and behavioural characters to be noted.

I assume you know or are willing to constantly update constantly your knowledge of Manx Shearwater as a bread-and-butter bird. The best thing is to go beyond simply recording how many Manx you see and where, to noting down what you personally observe about them as you ask such questions as: What do you notice about flight style? How often do they flap/glide? What does the underwing pattern look like at close range and at greater distance? How do different weather conditions affect flight? Do they behave differently alone/in groups?

Assuming this ongoing working knowledge of Manx, here is my no-nonsense, cut-out-the-caveats, guide to Yelkouan identification based on repeated personal experience.

I know they are supposed to be about the same size, but when you see them, Yelkouan have the 'feel' of a ¾-sized Manx. If Little Shearwater is small, and Manx is large, then Yelkouan gives a medium-sized, kind of Audubon's Shearwater impression (and a more prominent pale eye-ring adds to this too). Compared to Manx, which appear to have longer, thinner, and more rakish-looking wings, the wings on Yelkouan look a bit shorter, especially the wing-hand (outer section), and a bit less pointed, looking more rounded at the tip. Having watched hundreds of Manx on one day and then, literally the next, hundreds of Yelkouans, the impression I gain is that Yelkouan is clearly a different-looking, overall more compact, bird. It is subtle, but I reckon could help pick out a Yelkouan before any critical plumage features are seen. Such subtle structural differences have already proved helpful in the Cory's versus Scopoli's challenge, in that two examples of Scopoli's seen off Scillies and Ireland immediately 'looked different' to the observers' experience of Cory's. But for Yelkouan you have to know Manx well in order to be geared up for this kind of difference.

The good news is that this impression of different structure is actually borne out when specimens are measured. Yelkouans have shorter wings, especially the outer hand and shorter tail, than Manx and the skull is shorter with a steeper forehead too (Peter Hayman pers. comm., Gutierrez 2004).

There are some behaviour clues that could make picking out a potential Yelkouan quite easy, though you won't find them written up in any literature.

Firstly, Yelkouans are much more 'flappy' in flight than Manx, as far as I can tell in all weather conditions. To put it simply, Yelkouans flap much more than they glide, so the impression is of a shearwater that prefers to flap continually with short glides that provide a brief respite in the flapping rhythm. Conversely, Manx prefers to glide, seeming to flap in order to get the bird to the next gliding/shearing session. Manx glides at least 50% of the time plus. Yelkouan seems to glide only about 30% of the time (very approximately!)

Secondly, and this is a great feature: Yelkouans love to raise their heads up and down in travelling flight. The character is the same thing that you can see Red-throated Divers do and, if you are fortunate, Little Shearwaters. I have also seen it done regularly by Balearic Shearwater, but it is NOT a regular habit of Manx. At most Manx can be seen to do a little head jerk but you have to look hard and be concentrating. Yelkouans lift their heads up and down frequently, most often at either end of a flapping sequence. The feature is easy to see on the Yelkouan section on Paul Doherty's Birds of Britain and Europe DVD collection. Yelkouans also have a tendency to turn the head sideways as if looking up to the sky (or down to the sea), which causes the whole face to 'flash' extensive white, again recalling Little Shearwater. Sometimes they raise the head and twist at the same time.

Thirdly, and probably not much use in UK waters: flocks of Yelkouans look like packs of Starlings, bunched close together, with a random shape often rather flat over the water's surface. Manx usually fly in more strung-out lines and even in flocks look less 'together' than Yelkouans.

This is trickier and more subtle. Really good views are needed and I think the best plumage difference to look for is the overall underwing pattern. On Yelkouan the impression is of a wholly pale underwing with some diffuse wash over it causing it to contrast subtly with the whiter body. The rim of the underwing looks framed with a thin dark fringe all the way around. In contrast at close range Manx shows a gleaming white underwing the same as the white body with a blackish rim but also blackish undersides to the primaries. Close views are needed, as the contrast on Manx is less obvious at greater difference. The dark diagonal line supposedly more obvious on the underwing of Yelkouan is too variable and overlapping with Manx to be of any real use.

That's the best feature. Of other plumage characters, Yelkouans have a more prominent pale eye-ring recalling Audubon's Shearwater. The upperpart tone is not generally much help, as Yelkouan can look blackish above or grey-brown. Manx can look very blackish or against the light very brownish. Yelkouan is on average look rather dark greyish-brown at close range and never as 'pied' as the most striking Manx.

In profile most Yelkouans look similar to Manx but with a neater line separating the dark upperpart and white underparts, which on Manx is more 'interrupted' on the body (on either side of the wings). The bright white body is similar to Manx, except that the face looks more extensively white than Manx with no white hook at the rear of the face and no big dark smudge mark on the body at the wing base. These features give Yelkouan a neater 'different' facial pattern to Manx. Some Yelkouans have a grubby 'bum' area of the rear vent/undertail coverts, which is a diagnostic difference from Manx, but also many do not.

This is frequently quoted and pretty useless as a feature in most seawatching conditions! It's hard to see in the field and Manx often can pose with feet projecting beyond tail.

Best features for finding a Yelkouan Shearwater are: 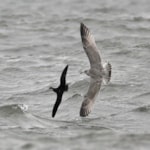 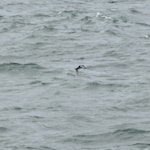