Focus On: how to separate Bonaparte's and Black-headed Gulls 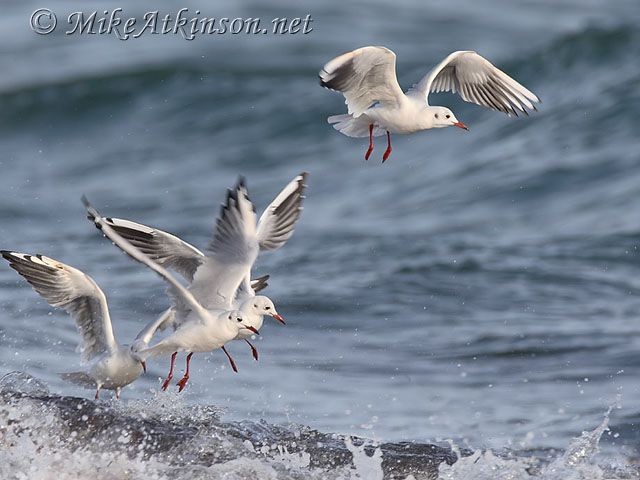 Black-headed Gulls: Anglesey. Systematically searching through gull groups is the best way to increase your chances of finding a rarity. Black-headed is the benchmark, so learn them well and you are well prepared for something rarer. Smaller flocks in the early spring are often more fruitful tan a winter roost thronged with thousands! (photo: Mike Atkinson).

You either love them, or hate them: gulls are a favourite family for some, loathed by others. There's no doubt that finding rare and scarce gulls can be hard work. The concentration required to sift systematically through tens, hundreds or even thousands of virtually identical birds tightly packed in front of you can be enough to deter all but the hardy (or foolish as some might suggest). However, there is no doubt about it - 'gulling' can be good fun!

Of the rarer 'hooded' Nearctic gulls, some are easier to pick out than others. Franklin's Gull and Laughing Gull are both quite distinctive birds and easily stand out amongst a group of Black-headed Gulls, even if you then have to decide which of the pair it is. Far more subtle, but equally attractive, is the smaller Bonaparte's Gull. Doubtless overlooked, it was formerly an extreme rarity on this side of the Atlantic until quite recently: there were only around 30 records by the early 1980s. Nowadays the rarity shroud has been lifted, no doubt aided by an increased interest and awareness, and there has been a notable increase in sightings, such that the number of accepted records is rapidly heading towards the 200 mark. A number of well-watched birds in the last 15 years or so have no doubt aided observer competence, but this attractive gull remains a nice find all the same and one that is sought by confessed self-finders. As always, the key to finding something unusual is a good grounding with the familiar, which in this case is the Black-headed Gull - the benchmark small gull for gull-watchers on this side of the Atlantic.

Size-wise Bonaparte's lies between Black-headed and Little Gull, though it most closely resembles the former at all plumage stages. However, the quicker wing-beats may recall Little Gull and the feeding action recalls that of terns as they feed by picking items off the surface. 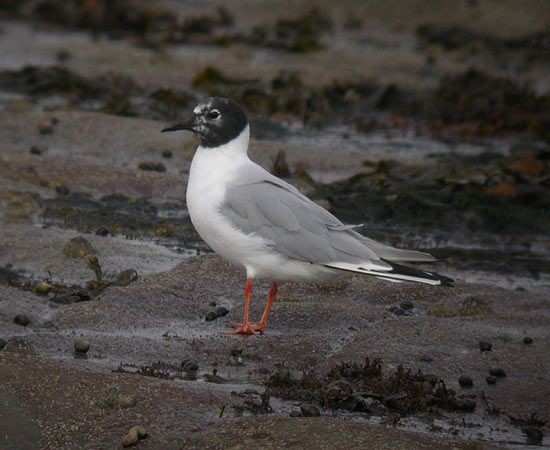 Bonaparte's Gull: Northumberland (September). Starting to lose summer plumage with blackish, rather than chocolate-brown, hood. The upperparts are a shade darker than Black-headed, plus the bill is all dark and the legs short (photo: Craig Shaw). 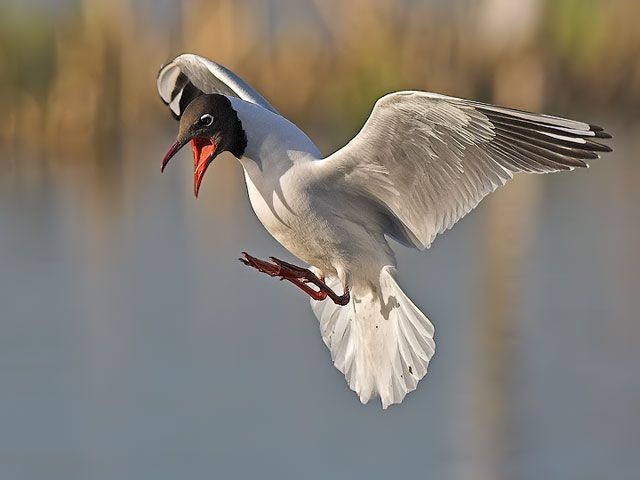 In summer plumage Bonaparte's has a dark-grey or black hood, complete with neat eye-crescents. The upperparts are darker grey, aiding the detection of a bird in a flock of its commoner congeners. The bare parts differ too: Bonaparte's has a black, or mostly black, bill, which is daintier in proportion. The legs are shorter, and are bright orange-red.

In flight the upperwing shares the white wedge on the outer primaries, but there is a slightly narrower black trailing edge. One of the better features to look for though is on the underwing, where Bonaparte's has translucent white primaries and a neat black trailing edge. 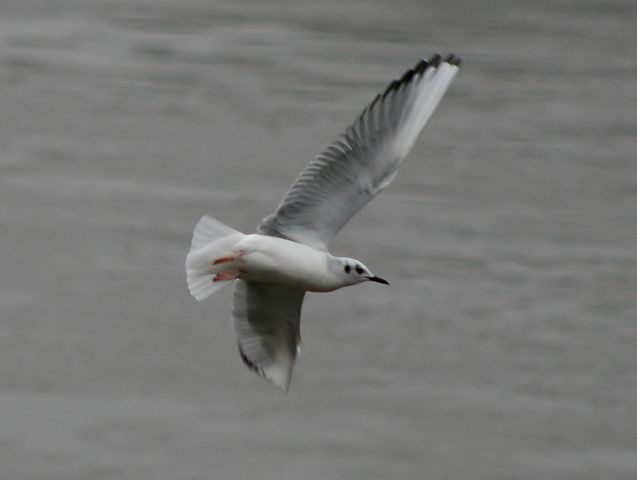 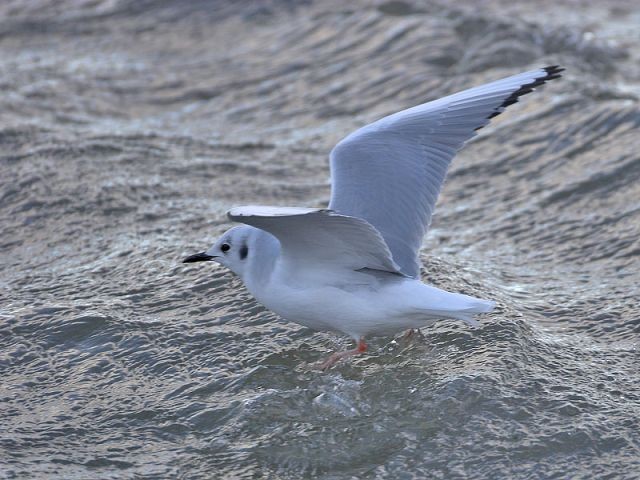 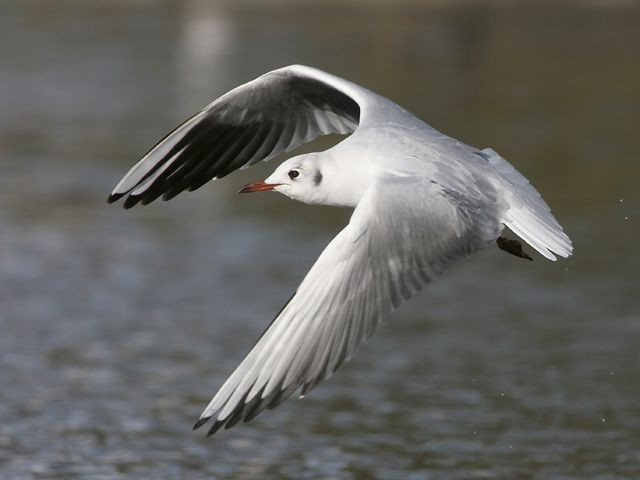 Adult winter Black-headed Gull: London (February). Unlike Bonaparte's the bill is reddish with a darker tip, and the underwing dark grey, lacking the translucency of Bonaparte's (photo: Fraser Simpson).

In winter plumage the hood is replaced, as in Black-headed, by an obvious black ear spot. Overall there is a greyer cast to the head, with the nape, rear crown and breast sides washed delicate grey and merging with the upper mantle. The bare parts comprise a black bill and short flesh-coloured legs. 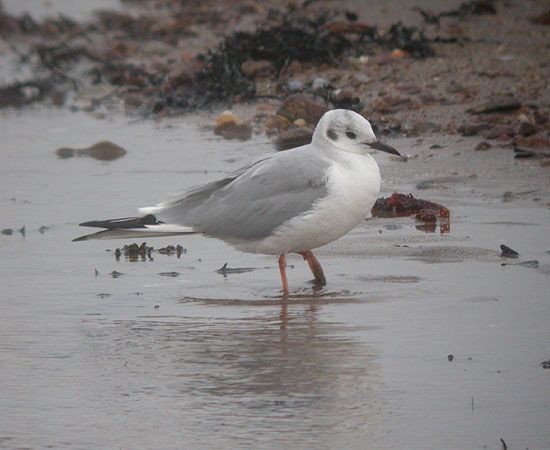 Adult winter Bonaparte's Gull: Outer Hebrides (April). The greyish wash on the nape and breast sides are immediate indicators of a 'rarity' for the finder, added to which are the daintier proportions of the bill and darker upperparts (photo: Craig Shaw). 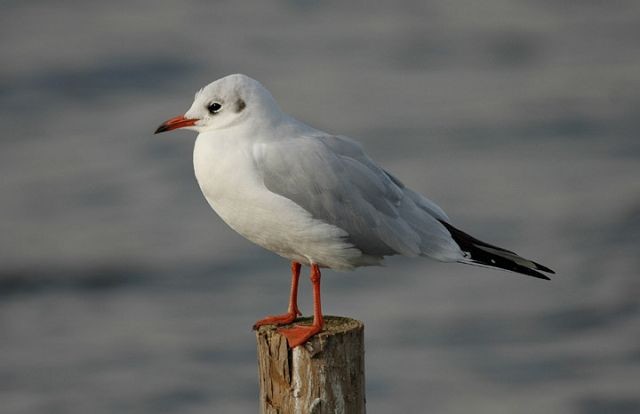 Adult winter Black-headed Gull: Nottinghamshire (November). The benchmark gull for observers; the upperparts are silvery-grey, lacking the darker tones of Bonaparte's, plus there is no greyish wash on the nape and breast sides. Also the majority of the bill is red, plus the legs are long and red (photo: John Dickenson).

The head and body of 1st-winter Bonaparte's Gulls resemble adults, with a subtle grey wash to the head and sides of the neck and the obvious spot on the ear-coverts, plus a grey mantle. The bill looks dark, though under close views a paler base to the lower mandible may be apparent, quite different to the bill pattern of similarly aged Black-headed Gulls. If you suspect that you have picked out a 1st-winter bird, pay particular attention to the upperwing, which differs markedly from Black-headed and appears to be a combination of white, black and grey. The leading edge to the primaries has blackish outermost primary coverts, making the leading primaries less white than is found in Black-headed Gulls of comparable age. In addition, the inner primary coverts are grey (not dark as in Black-headed) and the wing-covert bar appears very dark. The narrow trailing edge to the wing is sharply defined and the underwing differences are comparable to adults. 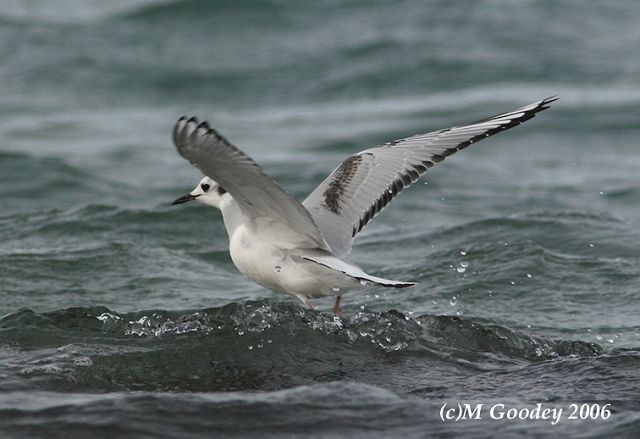 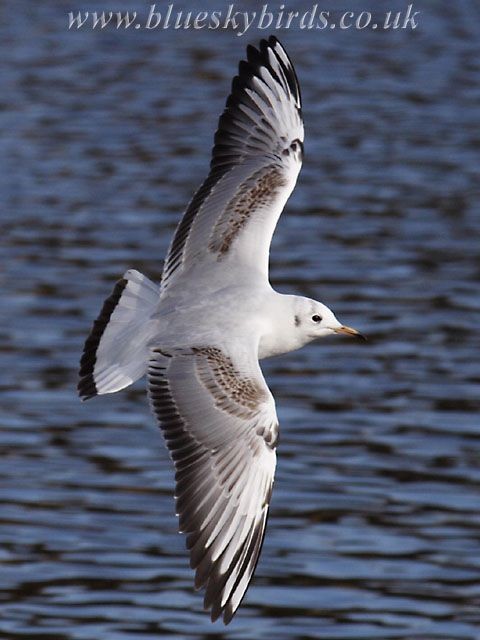 Black-headed Gull: Norfolk (February). When looking to claim a 1st-winter Bonaparte's it is essential to describe, in detail, the upperwing differences compared to Black-headed (photo: Peter Simpson).

First-summer Bonaparte's have blackish head markings, though most retain a head pattern similar to winter, with <5% acquiring the hood. Second-winters are similar to adults, but retain some dark streaks in the outer primary coverts and may also show dark markings in the tail. 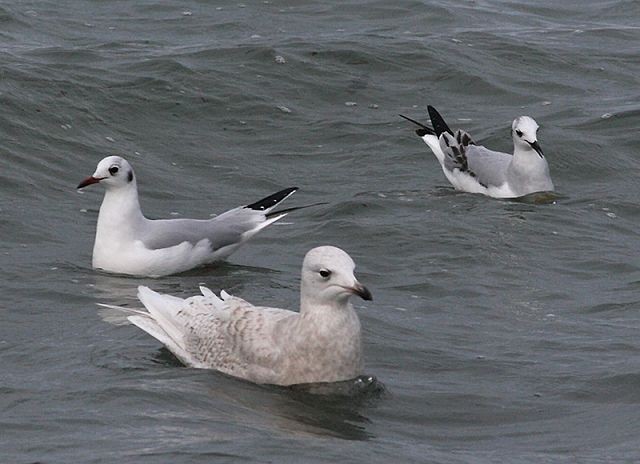 Bonaparte's Gull: Scilly (January). The 1st-winter bird is immediately apparent next to the adult winter Black-headed Gull. The addition of the Iceland Gull makes for a nice composition! (photo: Martin Goodey). 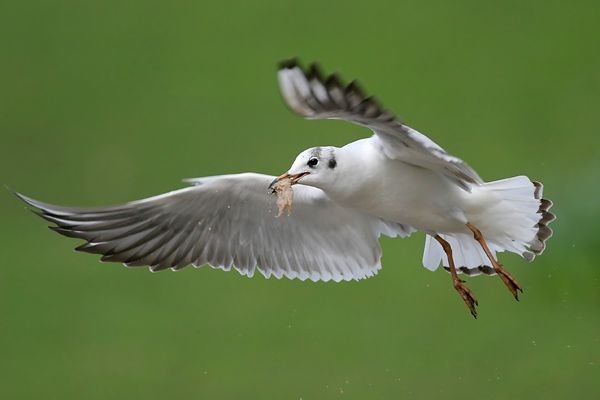