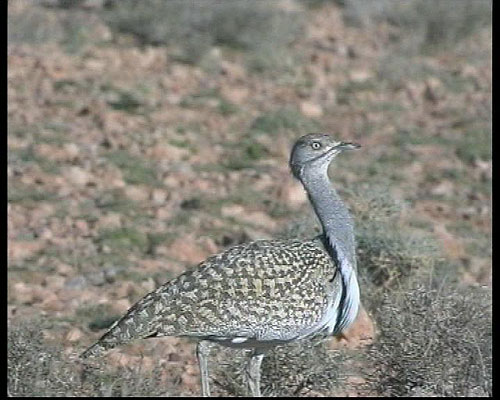 Imagine if the display feathers of Black Grouse were in their neck instead of under their tails; so when they fluffed out their plumage to display, this made the feathers cover their face so they couldn't see. It sounds so ridiculous that surely it could never happen? Surely evolution would find another way. But, although Black Grouse do have their display feathers in a sensible place, there is one Western Palearctic species that hasn't been so fortunate. I didn't realise this until last spring when I was lucky enough to watch a displaying Houbara Bustard.

I'd seen a Houbara many years ago transform itself from a perfectly camouflaged 'little brown ostrich' to a spectacular ball of fluff, part black, mostly white. This metamorphosis comes from 'fluffing up' the long feathers that hang down its neck. Black feathers are lifted up and backwards and the white feathers spring up and over its head, completely covering its face as if the whole head and neck has become a ball of cotton wool. But this remarkable change of appearance only tells half the story; what I'd seen before had been only partial display. It's what happens next that makes this bird so ridiculous.

When the white feathers spring up like one of those clown's dinner-jacket bibs that sometimes get out of control, you would expect the bird to move very carefully, maybe strut regally or at most do a little turn. At least that's what Great Bustards do. But Houbara's have no such dignity. Instead, once the male has that cloud of feathers over his head, he suddenly sprints across the desert for about 50 metres, then turns round and dashes back before turning again and trotting off in another direction. As a display it's very effective. He turns himself into a big white flag and waves it in zig-zags across the desert in sweeps of 50 metres or more. But remember he's performing these sprints with his head covered by feathers. It's like a can-can dancer lifting her skirt above her head and then running to all corners of the stage, whilst all the time keeping her dress so high she can't see where she's going. I must admit I never actually saw this bird stumble as it ran, though there's a description in BWP that says Houbaras do sometimes run into obstacles while displaying! 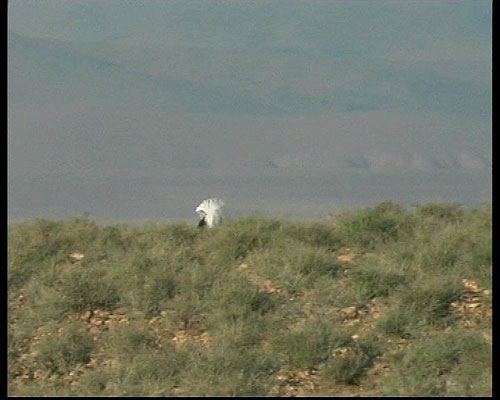 I watched this extraordinary performance through the viewfinder of my camera. I was having to film the bird with the camera 'hand-held' because I couldn't get out of the car to set up my tripod, for fear of disturbing the bird. To keep the camera as steady as possible I was pressed against the side of the car with the camera on my shoulder. I watched the bird start to fluff itself up, first the black feathers lifted to make a collar round the back of its neck, then suddenly 'ping' the white feathers shot up and the bird set off on a gallop like a panicking horse. The sight of this 'headless chicken' dashing unsighted over the desert was just so daft, I burst out laughing. Of course, it's impossible to laugh and keep your shoulder steady so I'm afraid that first sequence of footage will have to be scrapped. Not very professional. Thankfully, the bird performed a few more times so I did manage to get some sequences of the whole performance, though most of the time he is partly obscured by vegetation. The end of each performance is marked by what appears to be a two-footed stamp, at which point he stops running and allows his feathers to slowly settle back down, until the sight that remains is of a 'normal' Houbara Bustard standing bolt upright, apparently looking around to see if anyone had noticed.

Once his displays were over, he started walking around, pecking at the nearby bushes as he went. Thrillingly, he wandered in my direction and, paying no attention to me or my car, he passed so close he just about filled my viewfinder. By the time he'd walked out of sight I'd been treated to fantastic views, and many minutes of footage, of a bird whose display has to be the daftest of any species in the Western Palearctic.

Have any of you seen a bird do anything as comical as this? What's the daftest thing you've seen a bird do? (please send your tales to Dave Gosney)

Footage of this bird, including his remarkable display can be seen on BWPi 2006. This is a supplement to BWPi which adds new video clips, new sound recordings, updated population details and more species texts from BWP Update, in such a way that the new material appears within the menus of the current BWPi. For further details go to BWPi.