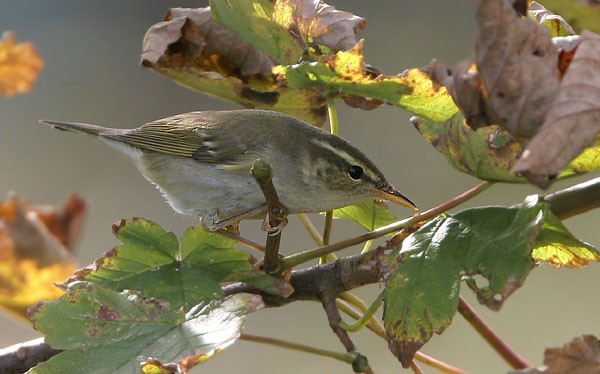 Arctic Warbler: Portland, Dorset (October 2005) The deep-base to the bill is apparent in this photograph, together with the pale-coloured legs. Note also the dark eyestripe, mottled ear coverts and 'dingy' underparts (photo: Kit Day).

Greenish Warbler and Arctic Warbler are two species that most active birders will have seen with relatively little effort in Britain. Neither are exceptionally rare, with, by the end of 2004, over 400 accepted Greenish records and over 250 Arctic records. Records of Greenish Warbler have now become so frequent that the species was removed from the list considered by the BBRC at the beginning of 2006; a timely decision following an east-coast deluge of this subtle Phylloscopus in autumn 2005. 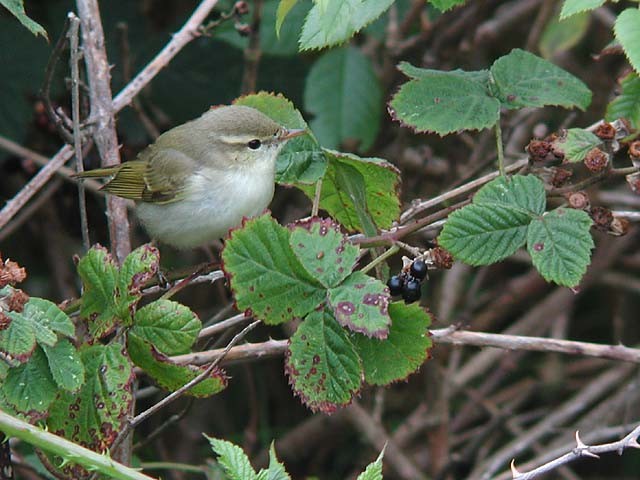 Greenish Warbler: South Gare, Cleveland (September 2005) A smaller-billed bird than Arctic, with the concolourous eye-stripe (with crown) broken to the front of the eye and relatively 'clean' ear coverts. Also note the dark legs, partially obscured in this shot (photo: Ian Boustead).

Although taken for granted by modern birders, these species have not always been so easy to see. In times gone by both were considered specialties of the Northern Isles, especially Arctic. The rarities scene has changed and two week excursions to Shetland are no longer required to see these exquisite phylloscs. News services, such as ours, ensure a steady flow of information during east-coast falls in early autumn, ensuring timely news for those wishing to see their own, with relatively little effort required other than an element of patience perhaps. Arctic Warbler still remains a good find away from the Northern Isles, with well-watched coastal counties such as Northumberland, Yorkshire, and Norfolk all with low cumulative records totals in the mid-teens. Perhaps the most impressive Arctic Warbler find was one well inland at Blithfield Reservoir in Staffordshire in 1993. Likewise, two Greenish Warblers in Leicestershire in 1996 were quite exceptional; accepted records imply that neither species strays far from the coast. 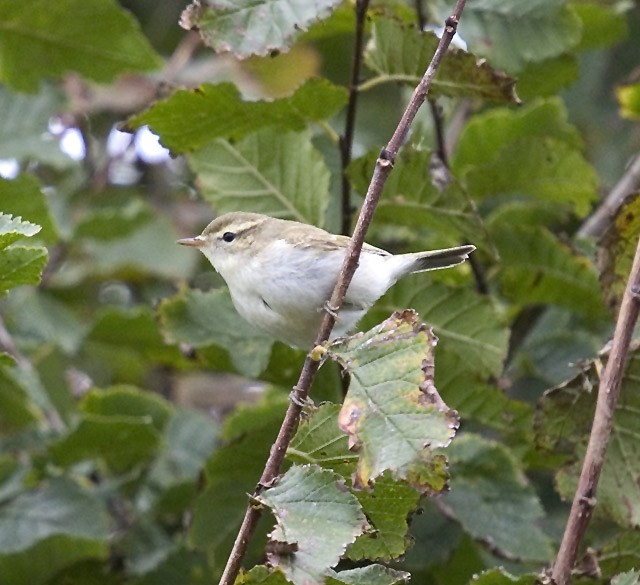 Greenish Warbler: St. Agnes, Scilly (October 2005) The silvery-white underparts are a pro-Greenish feature when initially viewing a possible from below (photo: John Judge).

So, despite familiarity with these birds from occasional twitches, are you prepared for finding your own when the wind switches to the east and it's a September day full of promise? Picture the scene: the coastal gully is cloaked with full-leaved sycamores, the day is overcast and a drizzly easterly has dropped lots of migrants on your patch for the day. You stand gazing up into the sycamores, slowly working your way through the birds: Willow Warbler, Chiffchaff, another Chiffchaff, then a bright phyllosc sporting a stonking supercilium and wing-bar dashes out from behind a leaf, perches momentarily and then disappears - which one was it? It's a dilemma that faces finders of this tricky duo each year. Over the last 20 years much has been written on the identification of these two species, but it's not unusual, even nowadays, for misidentifications to take place. Many birders are perhaps not aware of how similar each can, on occasion, appear to the other. An awareness of the key features to look for is essential for the seeker of these birds. A little bit of homework can ensure that you are not caught short when placed in the rather fortuitous position of finding your own. The following is a summary of the main features to look for, but be forewarned that even apparently straightforward birds have tricked experienced observers in the past, and are likely to do so in the future. 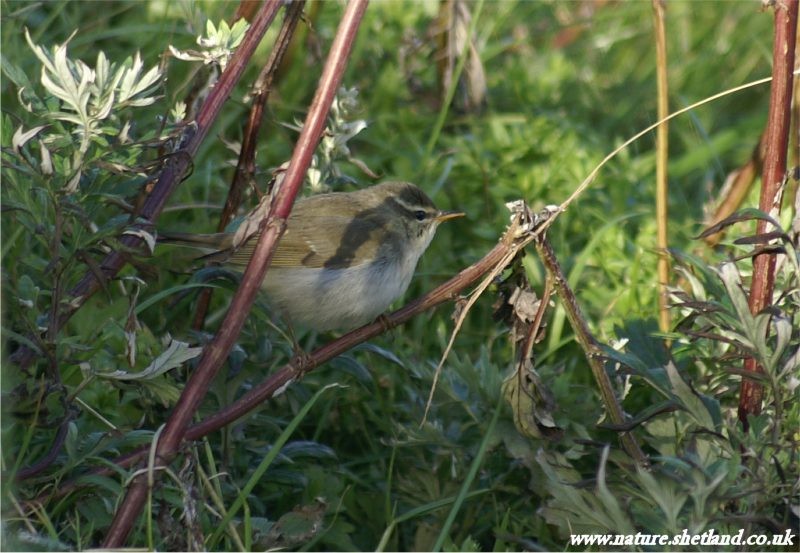 Arctic Warbler: Unst, Shetland (September 2005) Arctic appear pot-bellied; note also the upwards flaring of the supercilium to the rear - though this can vary with posture on both species (photo: Mike Pennington).

Without doubt he best way to identify these birds is to sit at home, or in the car, and listen (and learn) their calls long before this 'knowledge' is required to be put to the test. Birds in leafy gullies can be hard enough to see, so learning the calls in advance enables you to track a mobile bird. Thankfully, both Greenish and Arctic Warbler have very distinctive calls, which, once learnt can guide you to a vagrant individual of either species long before you see the bird making the sound. Nowadays there are a multitude of products which can help you to learn bird calls very quickly. New approaches involving the use of sonograms, such as that outlined by The Sound Approach to Birding, in conjunction with the use of audio, are the best way of retaining the different calls in your head for that all-important moment. An excellent comparison of the calls of both species can be found on the Dutch Birding website or by or by clicking back and forth between the calls on BWPi.

Compare the harsh Dipper-like 'zik' of the Arctic Warbler with the Pied Wagtail-like 'che-wee' of Greenish Warbler. Reading transcriptions of calls in a bird book is one thing, listening to them in the flesh, as it were, is far easier.

Unfortunately for us, not all birds are prone to call, especially if your patch is under a deluge of rain and a howling easterly at the time of your prized find. Fortunately, although the call really is the icing on the cake for nailing the ID of this pair, there are other ways to edge towards your conclusion in advance of hearing the call. The pathway to success is through obtaining good, and prolonged, views, again not something that all rare phylloscs yield easily! However, given close scrutiny of the features then it should be possible to identify a bird to species level. However, not all individuals are straightforward with some cases of individuals showing features of one species in the field that have been trapped and then found to be the other!

The following is a summary of features to look for on birds that stubbornly refuse to call.

Greenish are reminiscent of Chiffchaff, slim, appearing active and quick-moving. The following are pro-Greenish features:

Arctic are usually larger than Willow Warbler, pot-bellied and move about in a cumbersome manner, appearing slow and deliberate in their actions. The following are pro-Arctic features:

Forearming yourself with this knowledge should enable most silent vagrants to be assigned quite quickly, but the key really is to get the bird to call which will dispel any uncertainty immediately! The hard bit is finding your own in the first place... 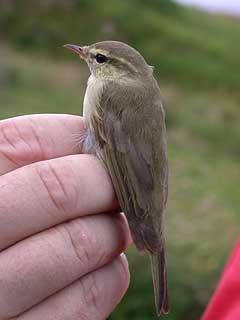 Greenish Warbler: Unst, Shetland (August 2005) This bird appears to be lacking a wing-bar. Most birds which we encounter in the autumn are crisp juveniles. However, this bird is an autumn adult and is very worn, thus appearing to lack a wing-bar (photo: Micky Maher).