In 2010, Grampian and Orkney Ringing Groups individually colour-ringed almost 500 Waxwings between late October and late November. We would like to thank all the birders, photographers and ringers throughout the country who have reported 96 resightings and six dead birds so far. At one in five birds, this is an outstanding return rate for a passerine and hopefully there are more to come. 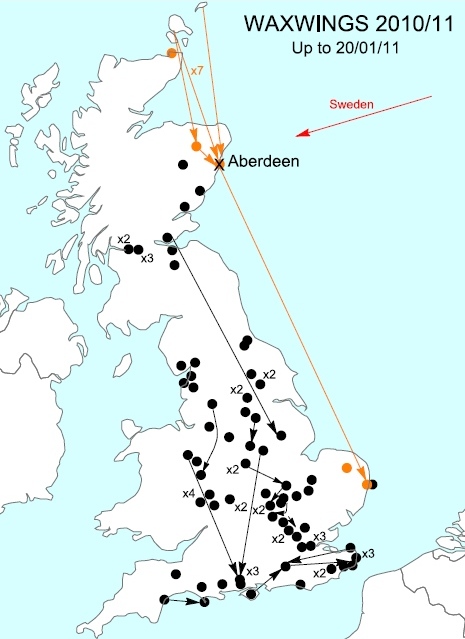 Every Waxwing invasion is different, but early movements seemed fairly normal with some rapid movements from Orkney to Aberdeen, an Orkney bird in Norwich within a couple of weeks of ringing and several Aberdeen birds well south within a few weeks: in Dunfermline, Lothian, Glasgow, Cumbria and Manchester. Then the cold and snowy weather arrived and really put a spanner in the works.

With competition for berries at a premium (Mistle Thrushes were even having to fight off Woodpigeons this winter), the remaining Waxwings departed from Aberdeen earlier than ever, leaving fewer behind than ever before. There then followed a record fast movement towards the south of England with unprecedented numbers along the south coast. From colour-ring sightings, it appeared many of these birds leap-frogged those already further north in England, with eight colour-ringed birds reported in Kent alone. 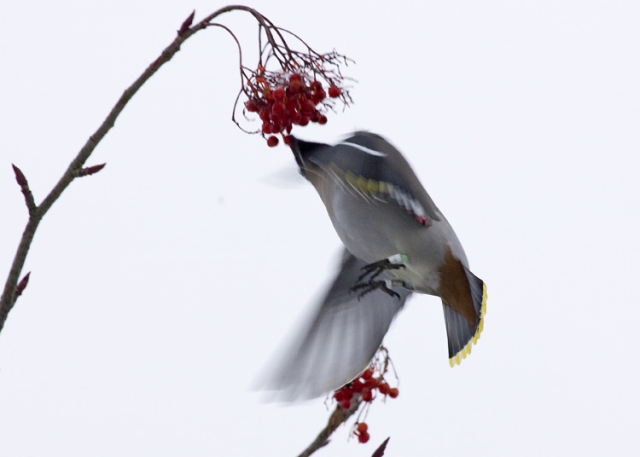 Waxwing LWW in Dorchester, Dorset, 19th December 2010. You forget how agile these birds can be when feeding until you see these images. (Photo: Chris Rowland.)

With this build-up on the south coast, we wondered whether birds might start crossing the channel into France and Belgium. However, numerous sightings of colour-ringed birds suggests they are preferring to head east or west along the south coast in search of berries rather than face another hazardous sea crossing. That's so far any way. Meanwhile colour-ringed birds are still being reported from further north so it will be exciting to see what develops over the next couple of months

Once again, a big thank you to everybody who has taken the time and trouble to report colour-ringed Waxwings, many with tremendous photographs that we have kindly been allowed to use in articles such as this. Keep up the great work. 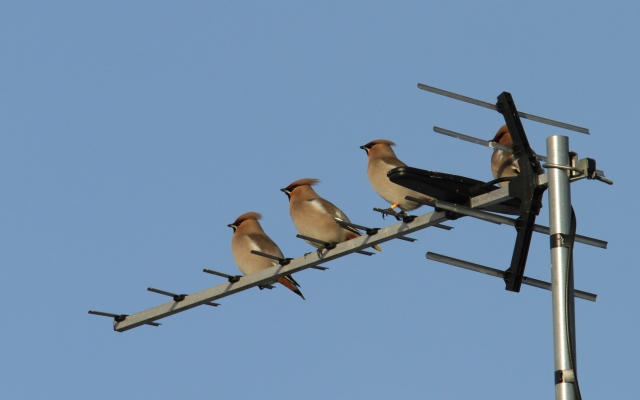 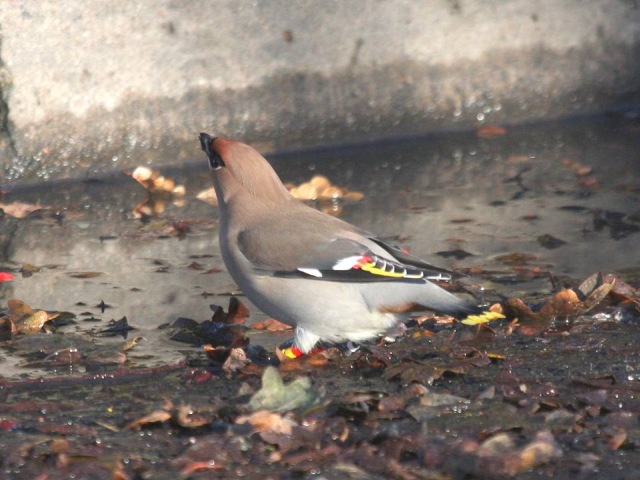 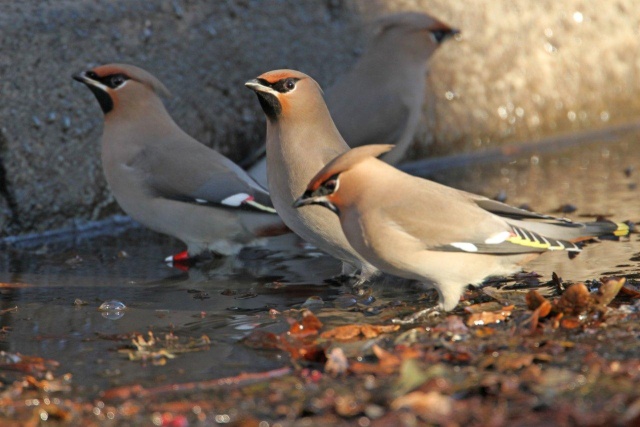 RRW in Hemel Hempstead, Hertfordshire, 9th January 2011. These two different colour-ringed birds were drinking in the same gutter in Hemel Hempstead. Even Waxwings let themselves down occasionally! These were photographed and reported independently by different birders. (Photo: Michael Nott.)

Save a Waxwing near you

Unfortunately, Waxwings are notorious for killing themselves against windows. In 2004, out of 87 dead Waxwings reported from around the UK, 66% were window casualties, often with several reported together at a site. The species' feeding behaviour is its downfall. Flocks swarm into berry trees in a feeding frenzy then fly out, often low and very fast, back towards a nearby resting place in a high tree or TV aerial. If house windows or a bus shelter are nearby or, worse still in between, this is when problems occur. Collisions seem to happen more often when it is bright and sunny, these conditions making the reflections in the glass or Perspex much clearer.

This winter has been no exception, with the usual spread of casualties as birds make their way down the country in search of berries. During the early part of the invasion in Scotland, 16 were reported over one weekend in Inverness, with six of them against the (ahem) RSPB office windows. Six were also reported in Elgin, while in Aberdeen at one traditional site local postman Derek Beverley picked up nine over a period of a few weeks. Eight were recovered at this same site in 2008. 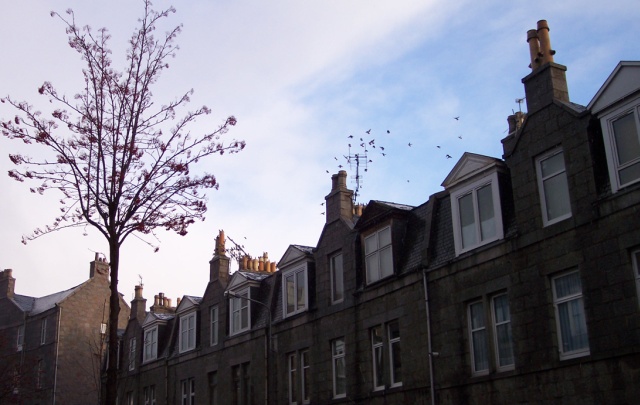 Waxwings gather on TV aerials before descending into the 'Waxwing graveyard' in Wallfield Crescent, Aberdeen to feed on rowan berries (photo: Raymond Duncan).

All is not lost, however, and action can be taken in some situations to prevent such losses. In and around Aberdeen we have most of the berry sites mapped out and we have managed to get folk to keep their blinds down at one or two sites when the Waxwings are around. 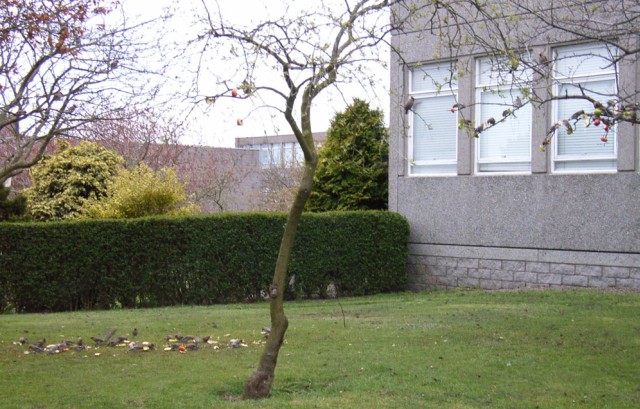 Blinds drawn at Hilton College, Aberdeen, where there were lots of Waxwings and windows but no casualties. (Photo: Raymond Duncan.)

At one very traditional site a bus shelter was erected on the street a few years ago, but by the time we realized it was a hazard in 2008 (it was about 10 metres away from berry trees and screened by tree branches, so the danger wasn't immediately apparent), eight Waxwings and even the resident Mistle Thrush had been found dead having collided with it. Posters were put up to prevent any further casualties that year. Thankfully, this is the same bus shelter in 2010 (below). 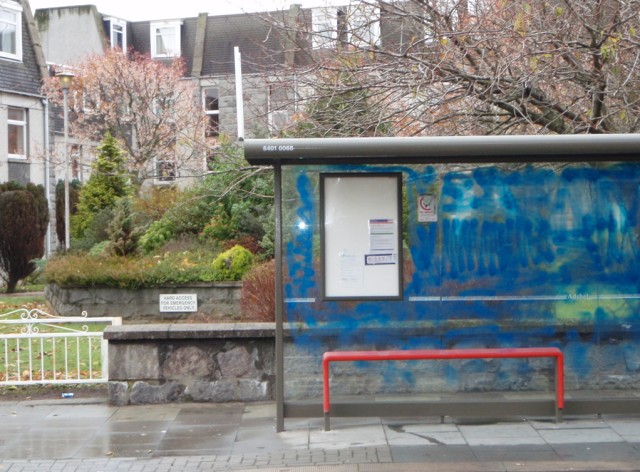 The 'blue' bus shelter in Aberdeen. One of the white-berried Rowan trees can be seen behind and to the left. (Photo: Raymond Duncan.)

The council were quite co-operative and spoke to the shelter maintenance company, who sprayed it an obvious turquoise colour to prevent further incident. Thank goodness they did, because the same scenario occurred in 2010. Groups of up to 30 or 40 birds would fly rapidly out low from their bout of feeding to head back across the road to their resting trees. Thankfully they were able to see the blue-sprayed Perspex with the flock sometimes parting in two as it zipped round either side of the shelter and there were no casualties this year. Of course we also took advantage of this behaviour now and again and the birds would meet with a mist net on their way out and we managed to colour ring a good sample of birds before they finished the berries and moved on.

If you do find a feeding flock of Waxwings, always check for dead birds below any nearby windows or bus shelters, particularly anything in the line of flight between feeding and resting trees. Try to stick up temporary covers or blinds to block any glare but ultimately, in the case of bus shelters, try to get them sprayed like the one in Aberdeen, or even moved.

It is one of the hazards Waxwings have to face when taking advantage of ornamental berry trees in our towns and cities. The only saving grace is that the birds don't take long to strip the berries and move on, hopefully to a safer set of trees not so close to these alien human hazards that we have created.

Bob McGowan at the National Museum of Scotland would be pleased to receive any freshly dead Waxwings. I have kept a particularly smart adult male back in my freezer for stuffing to replace the fairy on the top of the tree next Christmas!