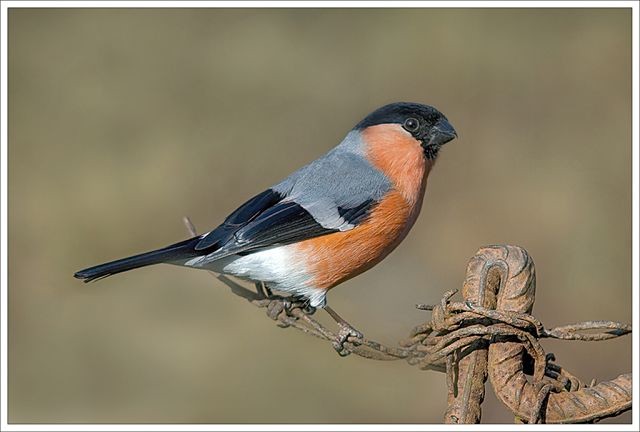 The Bullfinch is one of our most enigmatic birds, not least because of its shy and retiring nature. Although favouring deciduous woodland as its habitat of choice, since the late 1990s the Bullfinch has made increasing use of garden feeding stations. Small parties are reported visiting BTO/CJ Garden BirdWatch gardens across much of Britain and Ireland, with rural (and increasingly suburban) gardens favoured over those of a more urban nature. This reflects a preference for cover, especially in nest site selection, and gardens that are connected to small areas of woodland or scrub by thick hedgerows seem the most attractive.

Bullfinches as pests of orchards

Bullfinches generally remain in the same area throughout their lives but may move away from breeding sites during the winter months in order to exploit feeding opportunities elsewhere. The adults are vegetarian and feed on the seeds of trees, such as ash, and other plants, notably bramble, nettle and dock. Late in the winter, when seeds may be in short supply, they will turn their attentions to developing buds; flower buds are preferred over leaf buds - the former being nutritionally more rewarding.

This exploitation of buds has brought the Bullfinch into conflict with both commercial and non-commercial growers of fruit, something which has, historically, resulted in legislation sanctioning control. General licences allowing the trapping and culling of Bullfinches were available until relatively recently. Individual control licences may still be applied for, but research has shown that removal of cover in the area around the orchard is more effective than trapping in reducing damage to fruit trees. Interestingly, Bullfinches appear to have sensitive palates, preferring the buds of some varieties over others - for example, they seem to prefer the buds of Conference pears over those of Comice.

Feeding Bullfinches are well worth watching. They are slower and more deliberate feeders than many small birds, so it is easy to observe the ways in which they manipulate seeds in their bill. When feeding on fruits and berries, they tend to remove the seeds yet manage to leave the pulp in place, hanging from the plant. 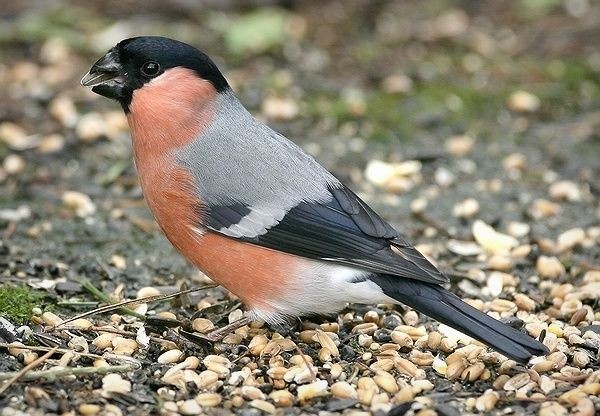 Going for a song

Despite the fact that the Bullfinch has a relatively soft and rather undistinguished call, it is actually a very skilful mimic. Bullfinches have thus long been valued as ornamental caged birds, with individuals readily taught to mimic tunes played to them. At one stage, very large numbers were imported from Germany to provide entertainment in fashionable houses. In the wild, the usual call is a low, short whistle, often transcribed in bird books as 'peu'. From late winter, through into the breeding season, you may just be fortunate enough to hear the very soft song of the male. This takes the form of a descending series of piped notes, repeated at intervals. It is not the easiest of songs to discern and this is one of the reasons why the Bullfinch is considered a difficult species to survey. 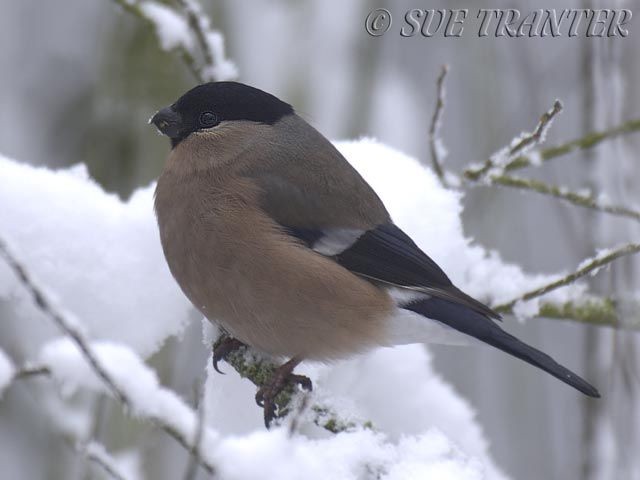 Bullfinch: Females are drabber, but still make for an exciting visitor to the garden (photo: Sue Tranter).

Even though breeding Bullfinches may be difficult to locate, we have good evidence of how the population has fared over the last 40 or so years. Sadly, the breeding population has undergone a dramatic decline since the British Trust for Ornithology (BTO) first began monitoring its fortunes in the early 1960s. The breeding population fell by about two-thirds over this period; a similar pattern to that seen in many other seed-eaters. It has been suggested that the might be linked to changes in food availability and predation risk. Whatever the causes, the good news is that the population appears to be increasing again. Figures from the BTO/JNCC/RSPB Breeding Bird Survey show a 5% increase over the last five years. This matches the increased use of gardens over the same period, as revealed by the BTO's Garden Bird Feeding Survey.

The BTO/CJ Garden BirdWatch reporting rate graph shows two peaks in garden use most years, one in the winter and one in mid-summer - the latter reflecting adult birds bringing youngsters to garden bird feeders. 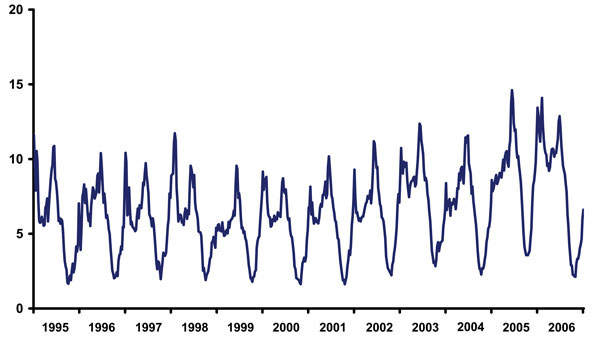 Very few pairs of Bullfinches breed within gardens, simply because the majority of gardens do not have sufficient thick cover within which the birds can nest. The nest itself is usually placed just inside the canopy of a suitable shrub or bush (such as bramble, hawthorn or blackthorn), some 1-2m off the ground. The base of the nest is made up of small twigs, upon which a woven cup of rootlets, black or brown in colour, is constructed. Adult Bullfinches may feed at some distance from the nest, something that is forced upon them because of the patchy distribution of their favoured food. To help the parents bring back food to their chicks, they have special food sacs positioned in the floor of the mouth.

If you have Bullfinches visiting your garden, especially during the summer months, then the BTO/CJ Garden BirdWatch Team would love to hear from you (gbw@bto.org). 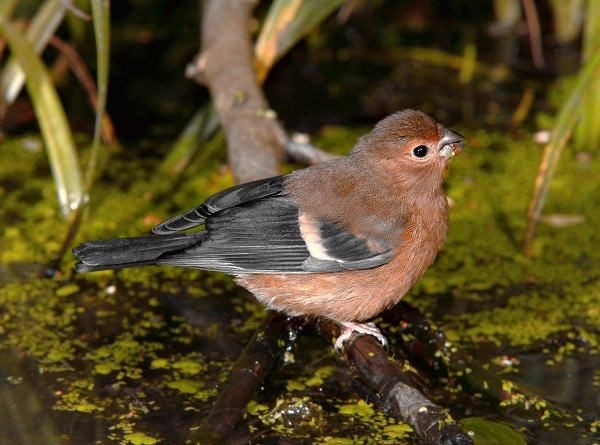 This article first appeared in Bird Table, the magazine of Garden BirdWatch, which is the largest year-round study of garden birds anywhere in the world. The 16,000 participants have already helped to highlight the increasing use made of gardens by species like Long-tailed Tit, Goldfinch and Woodpigeon. Their observations have also helped researchers to understand the reasons behind declines of House Sparrow, Starling and Song Thrush, and they have alerted us to sudden changes in status that are of conservation concern.

Garden BirdWatch is all about getting involved and gathering useful information, by using simple recording techniques. All you need to do is to keep a record of the birds seen using your garden during the course of the week. You can note the birds that you see over your morning cup of coffee or while working in the garden. How much time you spend recording is up to you. All that we ask is that you try to be consistent from one week to the next. The information you collect can then either be posted back to us once every three months or you can enter your observations online.

Garden BirdWatch is unique among BTO projects in that it is self-funded, thanks to the generosity of its participants, each of whom pays an annual contribution of £12.00 to cover the costs of producing the survey forms, the quarterly magazine Bird Table, analysing the results and running the survey. Please help us by giving your support today. For a free information pack, please email gbw@bto.org or call 01842 50050.