Scanning through flocks of common species is a well-established and effective method for finding vagrant birds. When vagrants associate with common birds, the common bird is sometimes referred to as the 'carrier species'. For example, White-rumped Sandpiper is frequently found among flocks of Dunlin so, in this instance, Dunlin is the carrier species. In fact, some vagrants are almost always found among carrier species, and are rarely seen alone. Often, the carrier species is closely related to the vagrant and there are often similarities in appearance, behaviour and habitat preferences. In some cases, the vagrant may have travelled to the UK from its normal range with the carrier, but in others it may latch onto the carrier after its arrival in the UK.

Carrier species can provide both a help and a hindrance when trying to find vagrants. Rarities are often present among very large flocks of a carrier species and finding the 'odd one out' can be daunting and time consuming but, on the contrary, having large numbers of the commoner cousins in the vicinity can provide us with size, colour or shape comparisons that facilitate finding vagrants. For example, trying to pick out juvenile Pacific Golden Plover among a large flock of European Golden Plovers is a real challenge, but at least the presence of European provides us with a useful size and shape comparison to aid detection of the smaller and more rakish Pacific. Finding a vagrant among large flocks requires birders to be very familiar with the carrier species in a range of conditions and often at distance.

So which common species provide us with the best opportunities for finding rarities, and which carrier species should birders learn inside out?

Geese provide a fantastic opportunity to search through for vagrants. As with any carrier species, sites that support the largest numbers stand the best chance of pulling in vagrants, and in certain parts of the country such as the north Norfolk coast and Scottish east coast, goose flocks number into the tens of thousands. Pink-footed Goose flocks have produced Lesser White-fronted Goose and Red-breasted Goose, as well as a wide array of scarcities including Tundra and Taiga Bean, Greenland White-fronted and Snow Goose. Eurasian White-fronted Goose flocks, particularly that at Slimbridge, Glos, used to produce vagrant Lesser White-fronted Geese on a near-annual basis, but that species has become extremely rare since the turn of the century. Dark-bellied Brent Goose flocks are the best places to find Red-breasted Goose, plus the scarce Black Brant, with the latter also rarely appearing among Pale-bellied Brent Goose flocks in Ireland.

Gatherings of wild Barnacle Geese are the place to look for Cackling Geese, as well as vagrant Canada Geese. The range of wild Barnacles is largely limited to islands off the west coast of Scotland (Greenland population) and the Solway Firth (Svalbard population), while Dark-bellied Brent Geese are generally only found along the English east and south coasts between the Humber and the Exe Estuaries. Pink-footed Goose is a little more widespread, with large numbers particularly in Norfolk, the North-West and Scotland. The presence of vagrants among such flocks is generally considered to be indicative of wild origin, though always check for rings as some known escapes and feral birds have also latched onto flocks of wild geese. Detecting Red-breasted and Cackling Geese among carrier species is usually relatively easy, but beware dismissing Lesser White-fronted Goose as its larger counterpart! 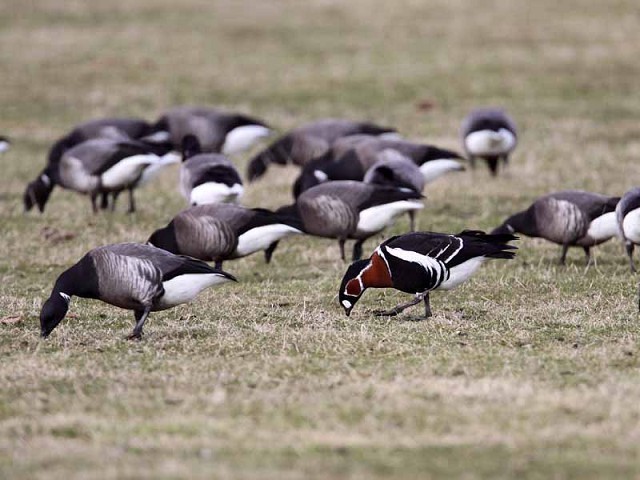 Scanning through flocks of ducks may not be everyone's cup of tea, but this is a productive pastime for locating vagrant wildfowl. King Eider is frequently found among Common Eider flocks, while the Steller's Eider in the Outer Hebrides in the 1970s and 1980s also associated with Common Eider. However the most recent Steller's, at Hopeman, Moray & Nairn, in November 2000, tended to associate with Long-tailed Duck. Flocks of Common and Velvet Scoter will always offer the chance to find two increasingly regular vagrants: Black and White-winged Scoter. Our common dabbling ducks often produce rarities: Eurasian Teal and Eurasian Wigeon flocks are optimal for finding Baikal Teal, and each routinely hosts its scarce Nearctic counterpart (Green-winged Teal and American Wigeon respectively). Eurasian Teal, along with Northern Shoveler, is also one of the best carriers for Blue-winged Teal. The vast majority of the American Black Duck found in Britain and Ireland have been in the company of Mallard. 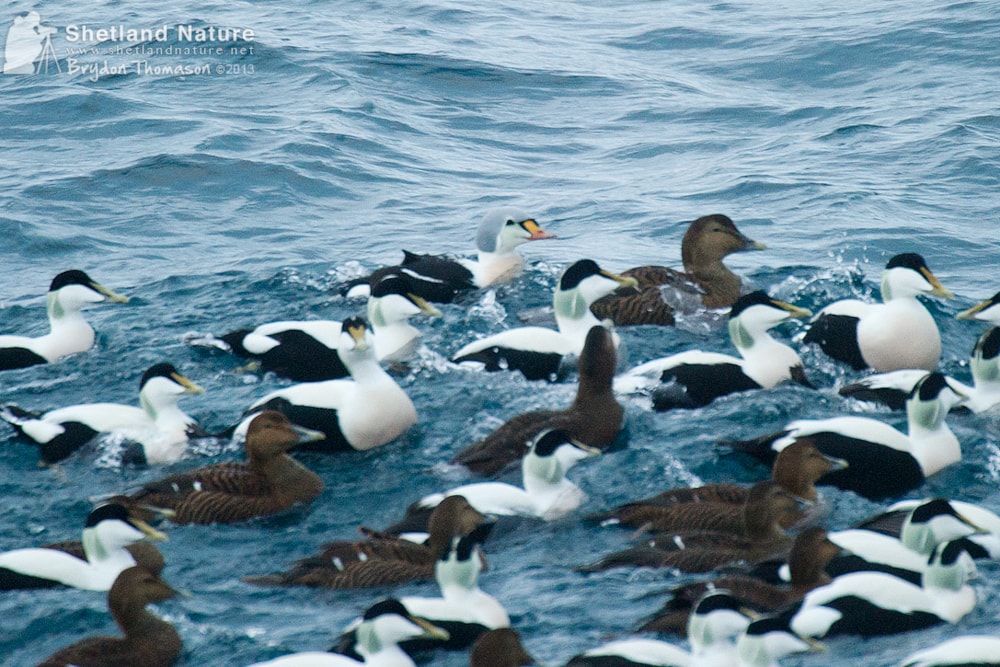 Despite their gaudiness, King Eiders can be surprisingly difficult to pick out among Common Eider (Brydon Thomason).

Tufted Duck and Common Pochard flocks are the place to look for rare Aythyas, including Canvasback, Redhead and Ferruginous Duck, and the scarce Ring-necked Duck and Lesser Scaup are almost always found among the former. These can also harbour Bufflehead and Hooded Merganser. Unsurprisingly, Barrow's Goldeneye have been found with Common Goldeneye on a number of occasions, as have Bufflehead, Hooded Merganser and Harlequin Duck. While adult drakes can be relatively easy to detect (although often not the case when distant), identifying ducks in female-type plumage is often considerably more difficult. Indeed, in some species, such as Green-winged Teal and Black Scoter, a female has never been identified on our shores. Unlike vagrant geese, which only tend to occur between autumn and spring, vagrant ducks can be found at any time of year, even if occurrences are most likely outside the breeding season. The stand-out area for finding vagrant seaduck is the east coast of Scotland where, for example, both subspecies of White-winged Scoter have been found among its large moulting scoter flocks. Vagrant dabbling ducks and Aythyas can occur just about anywhere.

Our common waders offer an excellent opportunity to find a high diversity of vagrant species from both the Nearctic and the Palearctic. The best carrier species are Common Redshank and Dunlin. Two Tringa species, Lesser Yellowlegs and Marsh Sandpiper, have been found among the former on many occasions, as have several other vagrant waders from other genera: Long-billed Dowitcher, Terek and Stilt Sandpipers, and Wilson's Phalarope. Dunlin flocks are an excellent place to look for vagrant Calidrids. Since 2000, six different rare Calidris species have been reported to BirdGuides as associating with Dunlin: Broad-billed, Semipalmated and Baird's Sandpipers are found on an annual basis, while Red-necked Stint and Sharp-tailed and Stilt Sandpipers have been found less frequently. The species also regularly plays host to a number of scarce species, especially White-rumped Sandpiper. European Golden Plover flocks offer a prime opportunity to find Pacific Golden Plover, and the same comment applies to the scarce American Golden Plover. Our largest congregations of common waders tend to be at estuarine sites where most birds are prohibitively distant to pick out vagrants. However, high-tide roosts adjacent to estuaries can bring large numbers of waders within range for scrutiny. Roost sites such as Frampton Marsh, Lincs, and Oare Marshes, Kent, are renowned for their track record of regularly producing vagrant waders, but anywhere that attracts numbers of the above carriers can also host rarities. 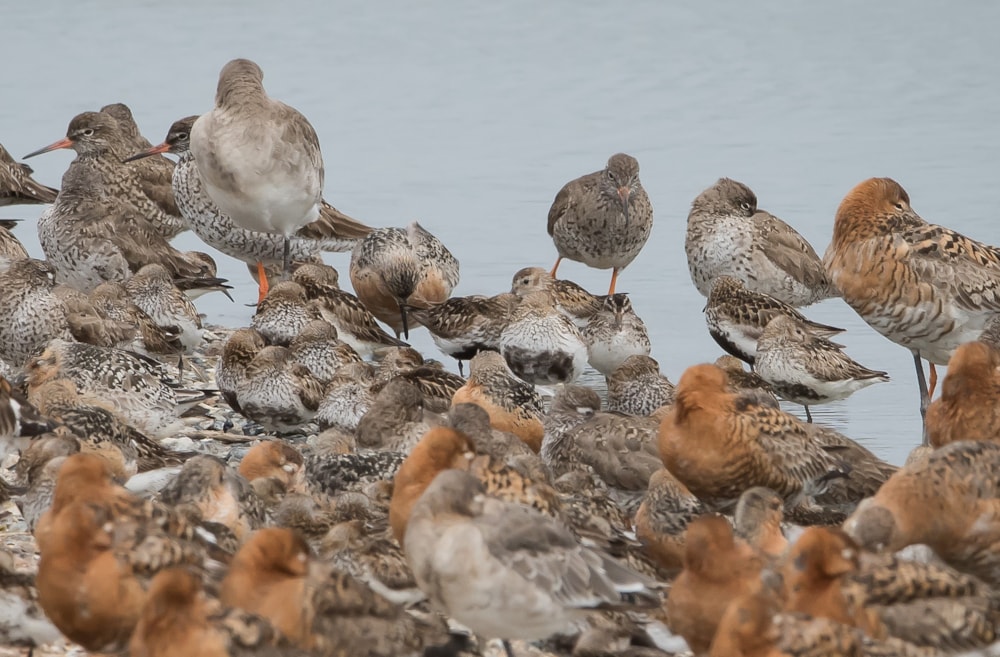 Can you spot the vagrant Broad-billed Sandpiper among these roosting waders? (Sean D'Arcy).

Britain's vast gull flocks are famed for their ability to attract vagrants. Naturally, smaller vagrant gulls tend to be found among Black-headed and Common Gulls, particularly Bonaparte's, Franklin's and Laughing Gulls. Larger vagrant gulls tend to be found among European Herring Gulls, including American Herring, Glaucous-winged, Slaty-backed and Audouin's Gulls. While the smaller vagrant gulls are relatively straightforward to pick out, the larger vagrant gulls are notoriously difficult to find and identify. The prospect of trying to pick out the likes of an immature Slaty-backed from a throng of thousands of herring gulls is too daunting for many to even attempt. But, time and time again, birders who have taken the time to routinely scour gull flocks have eventually been richly rewarded. Gulls also have the attribute of being ubiquitous and present year-round, giving almost any birder an opportunity to find vagrants at any time. While scanning gull flocks, it's well worth staying on the lookout for other species too. Reports submitted to BirdGuides indicate that vagrants from a variety of other species groups can associate temporarily with gull flocks, especially terns including Caspian and Gull-billed Tern.

Sandwich, Common and Arctic Tern flocks regularly pull in their rarer counterparts. Pre- and post-breeding gatherings are good places to look for vagrants, but arguably better still are breeding colonies, which hold large numbers of individuals for long periods of the summer. Ten species of tern considered by the Rarities Committee are possible among our common breeding species, including mega-rarities such as Sooty, Bridled, Royal, Elegant and Lesser Crested Terns. Those who enjoy an identification challenge should also look out for Cabot's Tern among Sandwich Tern, while Britain's only Aleutian Tern was found among breeding terns on the Farne Islands in May 1979.

The Farne Islands tern colony has produced Lesser Crested, Aleutian and this Bridled Tern over the years (Darren Ward).

Most of Britain's finches, sparrows and buntings are in decline, but gatherings have the ability to pull in a wide variety of species from both the Palearctic and the Nearctic. Perhaps the most revered group are the eastern buntings, and while they are often found alone, there is always a chance of a Pine Bunting among Yellowhammers or the scarce Little Bunting with Reed Buntings during the winter months. House Sparrow is not often thought of as a classic 'carrier', but both White-crowned and White-throated Sparrows have been found among them, as well as Spanish Sparrow and, most recently, two apparent Italian Sparrows. It almost goes without saying that Two-barred Crossbill can be found among Common Crossbills, while species as diverse at Trumpeter Finch, Citril Finch and Black-headed Bunting have been found among their commoner cousins.

The message is clear: when scanning flocks of common species, stay alert to the possibility of a vagrant lurking among the throng. Many of those fortunate enough to discover vagrants will cite luck as the reason behind the discovery, but luck is what happens when preparation meets opportunity – and there are numerous ways to increase your apparent luck. Ask yourself if there are any carrier species you normally ignore, because you don't expect them to contain vagrants. Finding rare birds is partly a numbers game: the largest congregations of carrier species will tend to stand a higher chance of pulling in vagrants (although this rule is not always true). Where are the largest numbers of carrier species present on your patch and are numbers are related to tide, disturbance or weather?

Get to know the appearance and behaviour of the carrier species inside out, so that you can whip through even very large flocks quickly and find any vagrant easier to detect. Realise that you stand a better chance of detecting vagrants at sites that provide the best viewing conditions. In general it helps if flocks of carrier species can be viewed closely, side-on and with the sun either behind you or with cloud cover overhead. Get into a routine: vow to visit your local patch weekly and your favourite remote island annually. However, rare birds are rare and finding them requires real persistence. If you've scanned through your local Black-headed Gull flock 10 times in the past week and still haven't found the hoped for Bonaparte's Gull, for example, don’t get disheartened – keep looking and the reward will come!