Dominating the city of Taiz, Jebel Sabir is one of the highest peaks in Arabia at over 3000 metres a.s.l. A tar road now goes to the summit, one of Yemen's most reliable locations for Arabian Accentor. Rising early, we started our ascent and were pleased to find Yemen Thrush by the roadside at around 2,700 metres a.s.l. If you know where to look, accentors are reasonably easy to find, so we stationed ourselves at a place that was receiving good morning sunlight and which would afford us a good angle should an accentor appear. 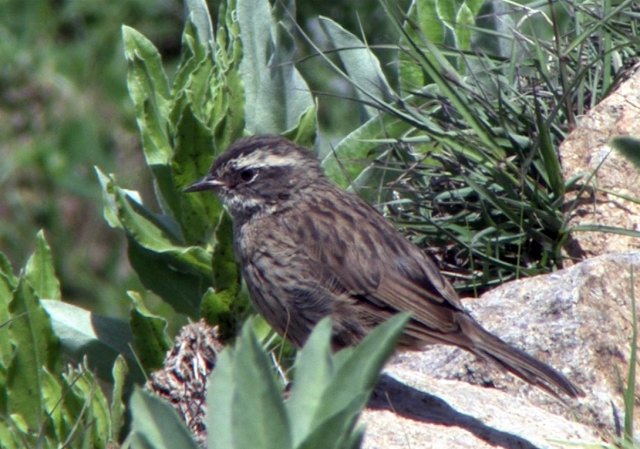 Within several minutes a pair showed, so I fired up the camera and aimed; just as I pressed 'record', a boy with a donkey lumbered onto the path and the accentors flew off. We were attracting quite a crowd so we moved to a site amid the terraces where we'd be less likely to be intruded upon. This soon bore fruit in the form of accentors, but they were always at the wrong angle or quickly fluttered out of sight. Seeing birds and filming them are entirely different enterprises and while we saw many accentors, I wasn't at all pleased with the footage I'd obtained. We'd have to try again at Sumarrah a couple of days down the road. 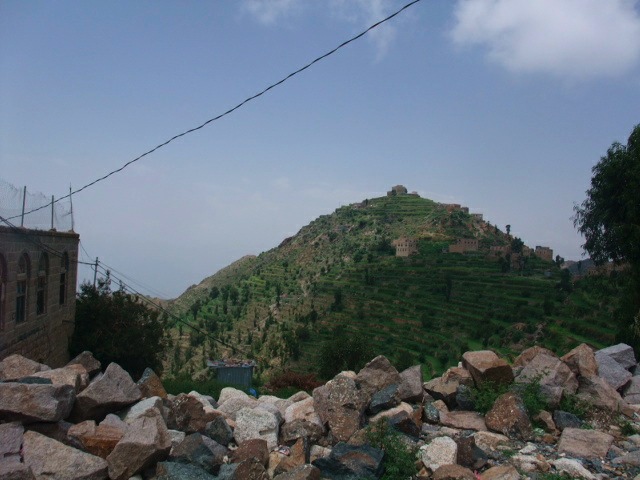 The very peak of Sabir, like most mountaintops in Yemen, harbours a military base. Since photographing anything military in Yemen is a breach of national security, I was concerned that aiming my camera uphill might land us more than just video clips of birds. Nonetheless, the many soldiers we encountered were more curious than anything else, and nobody suggested that an American speaking broken Arabic and carting professional video equipment around a Yemeni military base for several hours was at all irregular. 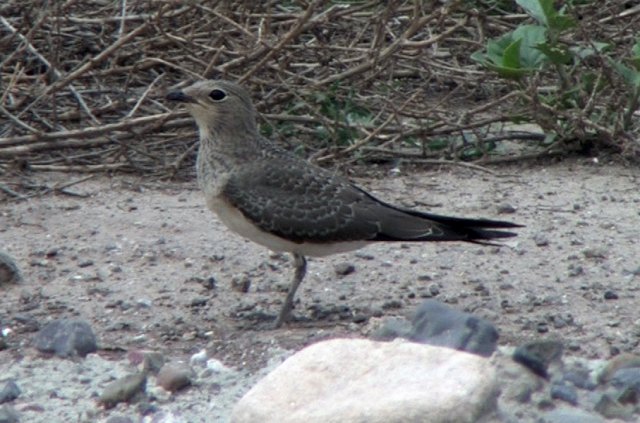 On the other hand, the situation at Al Burayhi, several kilometres to the north of Taiz, was initially not so friendly. Al Burayhi is where all of Taiz's sewage gets piped and where 14 Bald Ibis were photographed by Richard Porter in 1985. Locals believe that the city of Taiz wants to relocate the city tip there, a plan which is not welcome. Why they would object to a mountain of rubbish when they already have an ocean of sewage is not a question that I can answer, but they suspected that we were part of a survey team working on behalf of the rubbish scheme and we were accosted by a gang of unfriendly people who tried to bar our entrance. We went in anyway and ended up spending about 15 minutes convincing the posse that we really liked sewage ponds and wouldn't contribute to any effort that might change them, especially the establishment of a rubbish tip (even though this might attract lots of Abdim's Storks). In spite of the wasted time I was still able to get some great footage of a juvenile Collared Pratincole and did my best to capture the White-winged Black Terns' elegant flight. Meanwhile, the sky darkened ominously and thunder rattled the tripod. Before long, it started pelting down rain which put an end to another day's filming. 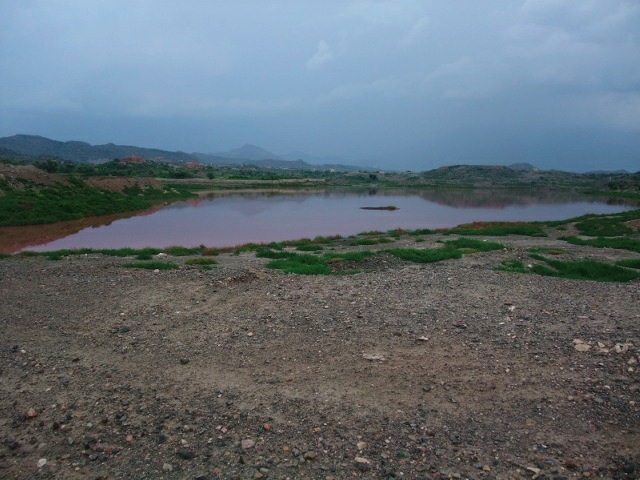 The next day we devoted to Wadi Dhubab, where we hoped for Zebra Waxbill. Within minutes we found one that allowed about 10 seconds of film before disappearing into the sorghum fields. A large tree thick with deep crimson fruits was a favourite of the Amethyst Starlings, but finding a male at close range in full sunlight was a goal that eluded us throughout the trip. There can be nothing quite as dazzling as a male Amethyst Starling in the right light but, like the Arabian Golden Sparrows and Zebra Waxbills, we had to let them go. 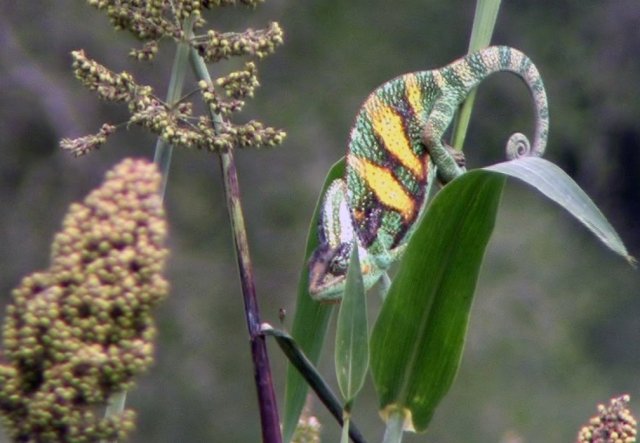 Yemeni Veiled Chameleons, on the other hand, were more forthcoming and we found five adult males during the course of our filming that day. The only problem with filming chameleons is that when they think they've been spotted they flatten their bodies and put a branch between themselves and their observer. All one can see under such circumstances are the hands of the lizard with bulging eyes looking not unlike those of a Bittern staring from either side of the branch. Side on, however, a male Veiled Chameleon in full breeding regalia is an impressive beast that wouldn't look out of place in a coral reef. 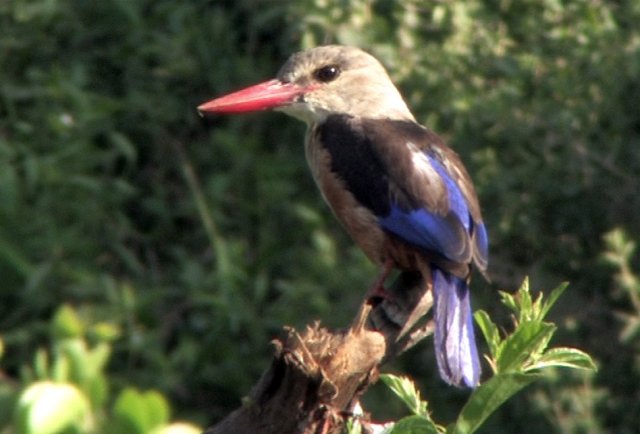 With time at a premium we had to prioritize the targets we'd missed, and scheduled the rest of the trip to try and find a better shot of Golden-winged Grosbeak. Dhi Sufal near Al Qayidah proved fruitless, though we did find Grassland Pipit and several cooperative Arabian Serins. Wadi 'Ana, near Al Udayn, was worth a try, but we hardly saw a bird of any species the whole afternoon except for a very sedate Grey-headed Kingfisher which sat like a statue for about half an hour, refusing to do anything for the camera. Up until this point, every one of the dozens of kingfishers we'd seen in various habitats invariably flushed as soon as I thought about filming them. 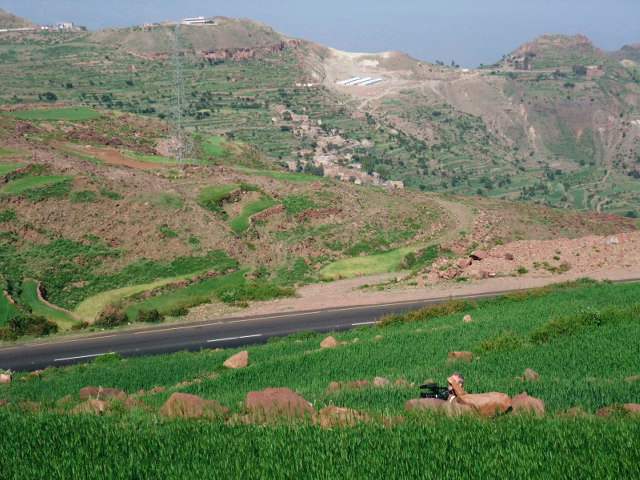 The next day would provide us with our last opportunity to film Arabian Accentor so we stopped at the legendary petrol station in Sumarrah. Ten years ago, accentors practically perched on the pumps, but lately they have proven more elusive at this well-known location. We climbed progressively higher among the terraces and soon got our first glimpse. Two hours of searching produced a few distant sequences, but in general the accentors were behaving coyly and not being at all co-operative.

We still hadn't taken any good sequences of Botta's (Red-breasted) Wheatears, so we decided to keep our eyes open on the Dhamar Plain as we continued north. I soon spotted one close to the road on a pile of stones, but it popped out of view as soon as I took off the lens cap. Expecting it to pop back up, we waited for several minutes before I decided to walk a wide arc around the stones and shoot from a different angle. The bird had entered a hole under the pile where it was obviously content to stay. We later found several wheatears near a waterhole that let me get reasonably close. My luck seemed to be improving when a flock of sheep came up to drink. I reasoned that acting like a grazing sheep would allow me an even closer approach, but my sheep impression must have been lacking as it caused the sheep to scatter, which scared the wheatears away. 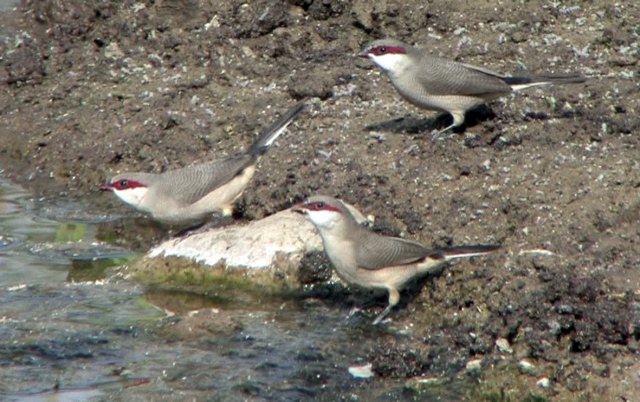 At this stage we still had at least one more opportunity for Golden-winged Grosbeak so we returned to Hamam Jaref where I'd first learned to use the camera a fortnight before. It was still quite hot when we got there in the early afternoon and, though we quickly found several good species, no grosbeaks showed. I found a small flock of Arabian Waxbills slaking their thirst at close range and finally got the shots that had eluded me at so many different locations. Fifteen long days on the road had taken their toll, however, and it was time to return to Sana'a and the comforts of home.

I scheduled a return to Shibam for the final day of filming where I hoped to improve on my Blanford's Lark shots and to get some better footage of Yemen Serin — a bird that can easily be seen, but usually at some distance since they prefer clinging to cliffs and high buildings. Getting our usual 5:30 start, Yousuf and I reached the Kawkaban Plateau when it was still rather cold. There were plenty of Serins at the Kawkaban Gate so we concentrated on them until I had several minutes of reasonable footage and things had warmed up for the larks. We found our larks within minutes and managed to get several decent clips, although I never did manage to film their spectacular courtship flights. With a few hours left, we went back to Sirhat Mahal of Arabian Woodpecker fame. This is a good site for the elusive Golden-winged Grosbeak and we staked out a favourite waterhole for three hours in the hope that at least one would show up. This never happened, though a Cinereous Bunting made a surprise appearance and a fitting end to 16 consecutive days of filming. 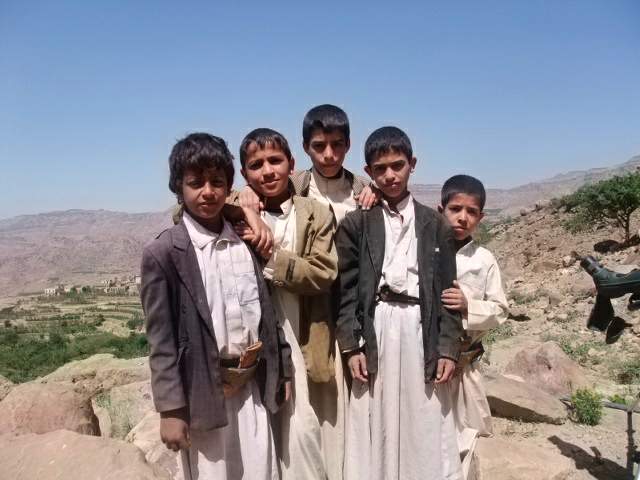 When I started the expedition, I hated it. Severely jet-lagged, and frustrated by my inability to get the equipment set up and running before the birds flew off, I wondered what I had gotten myself into. Before long, however, I started to get into it; the jet-lag wore off, the equipment became more intuitive, and I developed a more sympathetic approach to potential subjects. Even though the days were long and arduous I found myself rising before my alarm, which was invariably set at 4:00. Anticipation of the day's discoveries and the possibility of new cinematographic triumphs added spice to days that were sometimes frustrating but more often rewarding and pleasurable.

I've met many birders who seem satisfied to tick and move on, a practice that can feel quite shallow and superficial though I've done it many times myself. Filming birds compels one to get intimate with birds in ways that were new to me. I was forced to try and think like my subjects so I could anticipate their movements. Luck has a lot to do with it, but after this trip I felt as though I had learned more about Yemeni birds than in all of my previous 18 years of toting binoculars around the country.

In 16 days Yousuf and I covered well over 2,000 kilometres and filmed 112 species. Most of the time I stuck out like the proverbial sore thumb and anyone bent on mayhem could have easily found me since I was probably the only Westerner within miles. True to my experience over almost two decades in this country, however, my human interactions were almost uniformly positive. The women in Wadi Sara weren't throwing rocks at me, they were responding to their experience of being photographed by a few ignorant, selfish tourists that preceded me. Once the residents of Burayhi were confident that of our intentions were benign, our confrontation evolved into a typical Yemeni welcome. Otherwise, the most awkward moment of the trip came on the penultimate day in Hammam Jaref when a Yemeni man asked me what I was doing. "I'm filming birds," I said quite proudly. To which he replied, "Why?" The British Foreign Office and the United State's Department of State must have reasons for issuing their warnings. Somewhere in Yemen there probably are a few people with anti-west agendas. This is sad, and the recent murder and disappearance of nine foreigners in the north is a very good reason to avoid Sa'adah for the time being. However, filming birds for more than two weeks at numerous locations around the country simply reinforced what I have known for a long, long time: this is a beautiful country populated by wonderful people who share their Earth with some truly remarkable birds.