The 'dabbling ducks' are ubiquitous on lakes and ponds up and down the country, especially in winter when resident birds are joined by migrants from further north seeking warmer climes. But while males are distinctive, more cryptically plumaged females are much more challenging to separate. Here, Andy Stoddart provides all the information you need to identify the six regular species – Northern Pintail, Eurasian Teal, Mallard, Gadwall, Eurasian Wigeon and Northern Shoveler – both in flight and on the water. 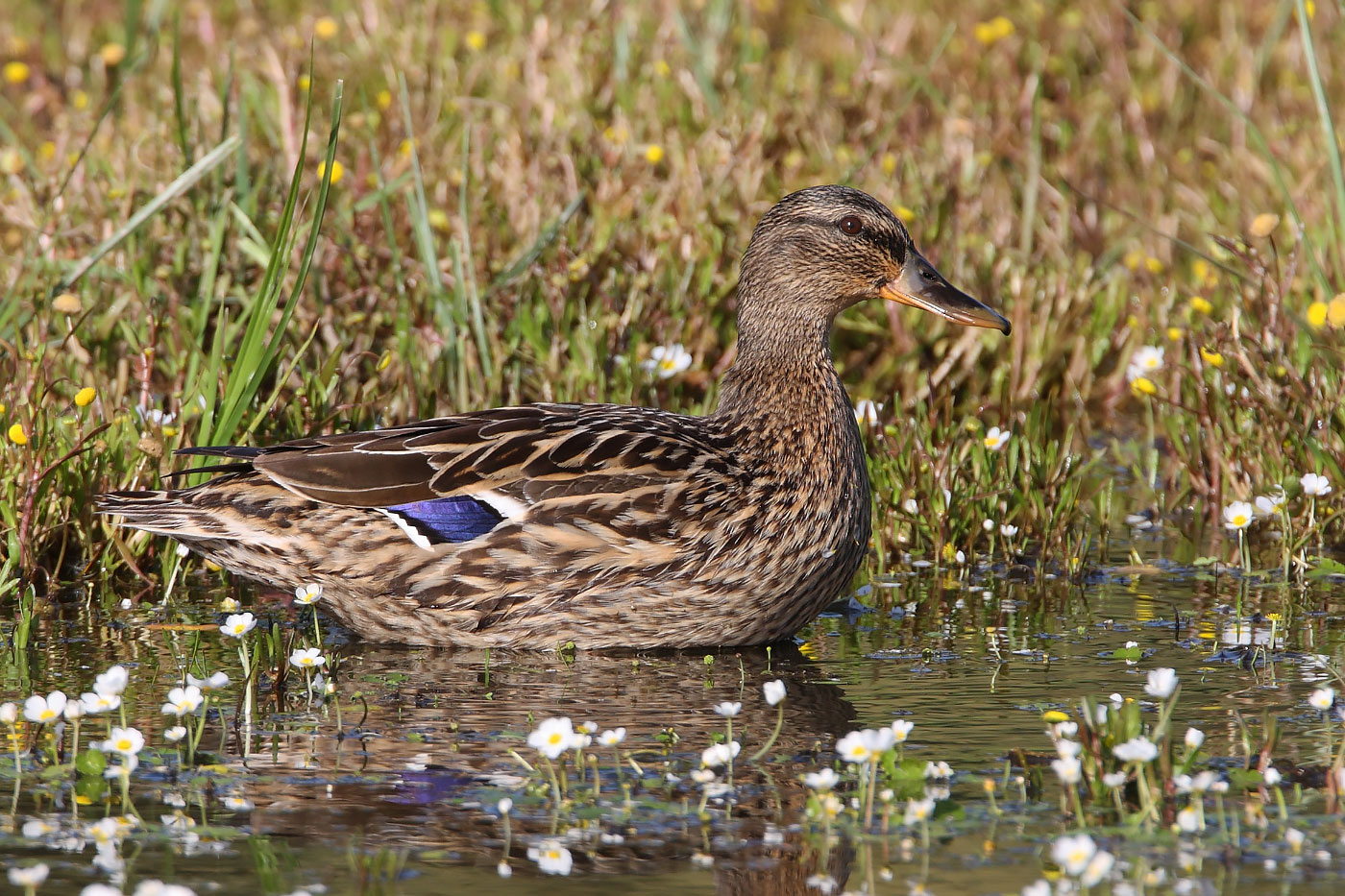 Mallard (Algarve, Portugal, 8 April 2011). Female ducks are often thought of as 'brown and boring' or 'all the same', with all the attention lavished on the more richly coloured males. However, this female Mallard, resplendent in its intricately patterned feathering and shining blue speculum, helps to show that female ducks are eminently identifiable, and things of beauty too (Neil Bowman).

Female 'dabbling ducks' are notoriously baffling, particularly to newer birders. While the males are colourful and distinctive, the females present, by contrast, are variations on a drab brown theme and prove much more challenging to identify.

A shortcut to their identification is often provided by a quick look at any accompanying males, but the females repay careful study. They are, in reality, fairly distinctive, and subtly beautiful too! This article looks at the six regularly occurring dabbling duck species in Britain.

In most areas this is the scarcest of the species discussed here and the least likely to be seen in very large single-species flocks. In Britain it is almost exclusively encountered in winter.

When typically seen among other dabbling ducks, female Northern Pintail is large and long bodied. The tail also looks long, although the elongated central tail feathers of the male are absent. The neck can be conspicuously long and thin, especially when extended, the head is small and the bill is long and slim, with the whole effect creating a very elegant, almost swan-like impression.

The plumage is noticeably pale – a beautiful soft buffy-fawn not matched by any of the other species. The face is strikingly plain and the breast is finely speckled, while the flanks contain prominent dark scallop-shaped markings. The dark greenish speculum is bordered with white along the leading and trailing edges. The bill is dull grey.

Female Eurasian Teal is generally straightforward to identify. The species typically frequents large waterbodies, where it can form large, tight flocks, but it will also use small, tree-fringed pools from which its rapid take-off ability enables a quick escape. In the air Eurasian Teal is quick and agile, and wheeling flocks can even resemble waders.

This is a tiny species, our smallest dabbling duck by far, and is often identifiable by size alone, particularly when associating with other duck species. Its proportions are compact, with a short body, small, rounded head and a relatively small bill. The overall impression is one of 'cuteness'.

Its plumage is fairly drab, with dark brown feather centres and paler fringes. Look, however, for the distinctive face pattern which comprises a dark eyestripe and crown and pale supercilium, and note also the conspicuous pale stripes adjacent to the tail sides. The speculum is dark green with a white and chestnut upper border and a white rear edge. The bill is dark with some orange in the base.

In many places this is the 'default duck' although in winter it is not as numerous overall as Eurasian Teal or Eurasian Wigeon. Females are large and 'heavy', particularly long and rather stocky in the body, with a somewhat inelegant structure – very much the traditional 'farmyard duck'.

The plumage is somewhat unremarkable, comprising dark brown feather centres and pale fringes, but note the dark eyestripe, dark crown and pale supercilium. The dark blue speculum is broadly bordered both above and below by white. The bill is dull greyish with variable amounts of orange present.

This species can look somewhat anonymous and can therefore cause particular identification problems. Its size and structure are closest to Mallard and (although it is actually in a different genus) it is most likely to be overlooked as that species. It is, however, significantly smaller, and more elegantly proportioned.

The female's plumage is also a close match to that of Mallard although the face and throat are somewhat paler. The key feature in the wing is a rectangular white area on the secondaries, although this may be quite restricted on juvenile birds. The bill is grey with a prominent and quite distinctive orange stripe along the cutting edges.

This species, like Northern Pintail, is very much a winter bird, at which time it can be found in large, noisy flocks, both on large bodies of water and also grazing on adjacent grassland.

It is a medium-sized duck with a quite distinctive structure, mainly a function of its rather fat-looking, rounded head, with a conspicuously steep forehead, a short neck and a short bill.

The plumage is quite striking too, not the drab brown of the other dabbling ducks but showing rich chestnut hues, particularly in the flanks. Out of the water and in flight, there is a very prominent and well-defined white belly. The speculum is dark, narrowly bordered white, and the bill is blue-grey with a dark tip.

This species is widespread but is rarely seen in large flocks. Typically it is encountered in ones or twos, often mixed in with other wildfowl.

This is a sizeable and 'heavy' dabbling duck, with a large head, short neck and long, broad body. It is perhaps the most structurally distinctive of all the dabbling ducks. The bill is most striking – long and shovel-like – although it is often held below the water and patience may be required for its true size to be revealed. In the meantime the 'front-heavy' swimming posture provides another clue to its identity.

The plumage is very much in the 'drab and brown' mould, but look for a dull green speculum with a white bar at the leading edge but no broad white trailing edge', and look also for a distinctive contrasting pale grey forewing. The bill is dark with orange sides. 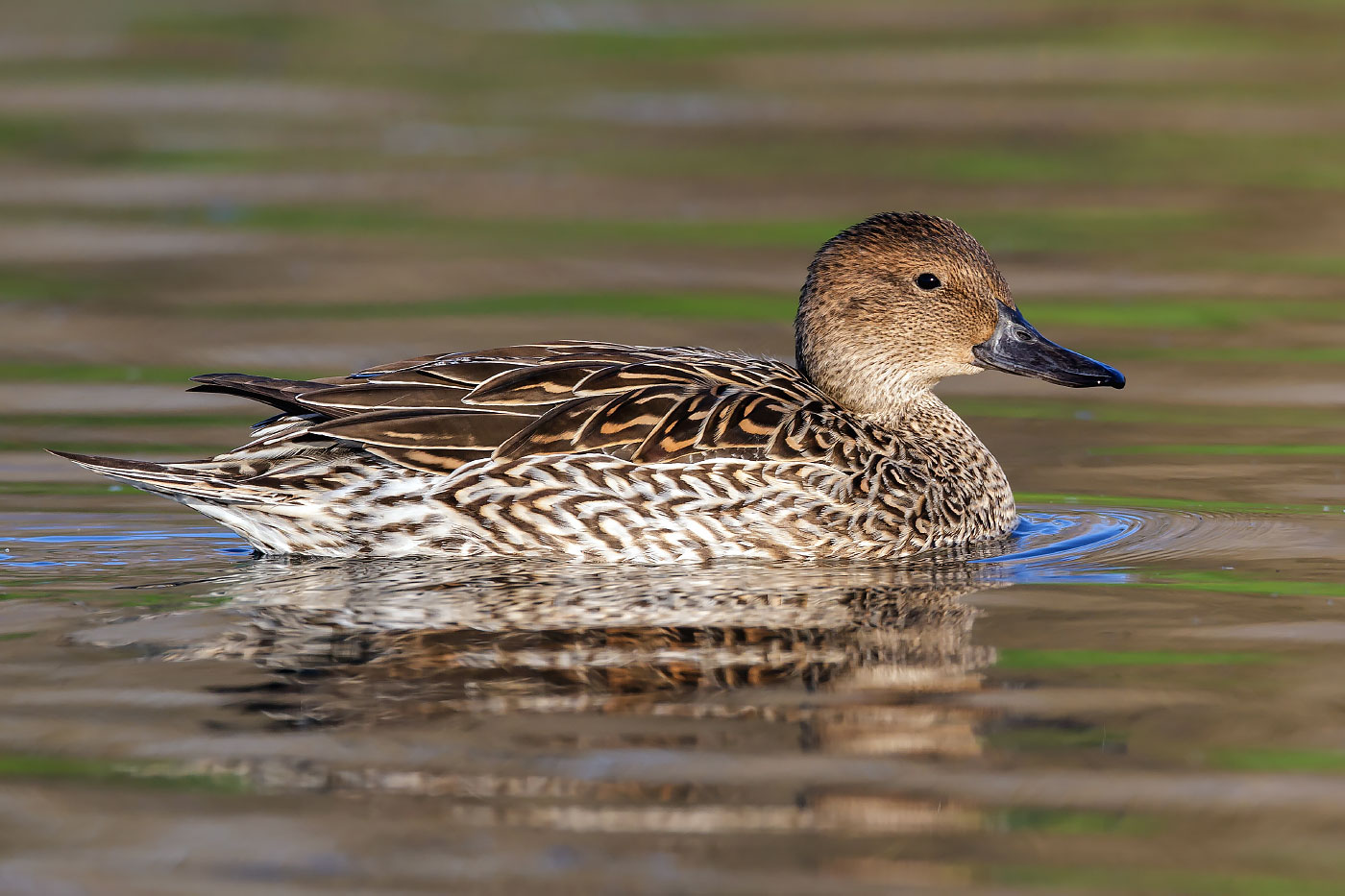 Northern Pintail (Santa Clara, California, 18 December 2012). This female Northern Pintail looks long bodied, slim and elegant, with a rather long and slender grey bill. Its plumage is equally striking, with a very bland, plain-looking face in which the eye is the only really noticeable feature, and an overall pale fawn appearance with strong brown vermiculations along the flanks (Brian E Small / www.agami.nl). 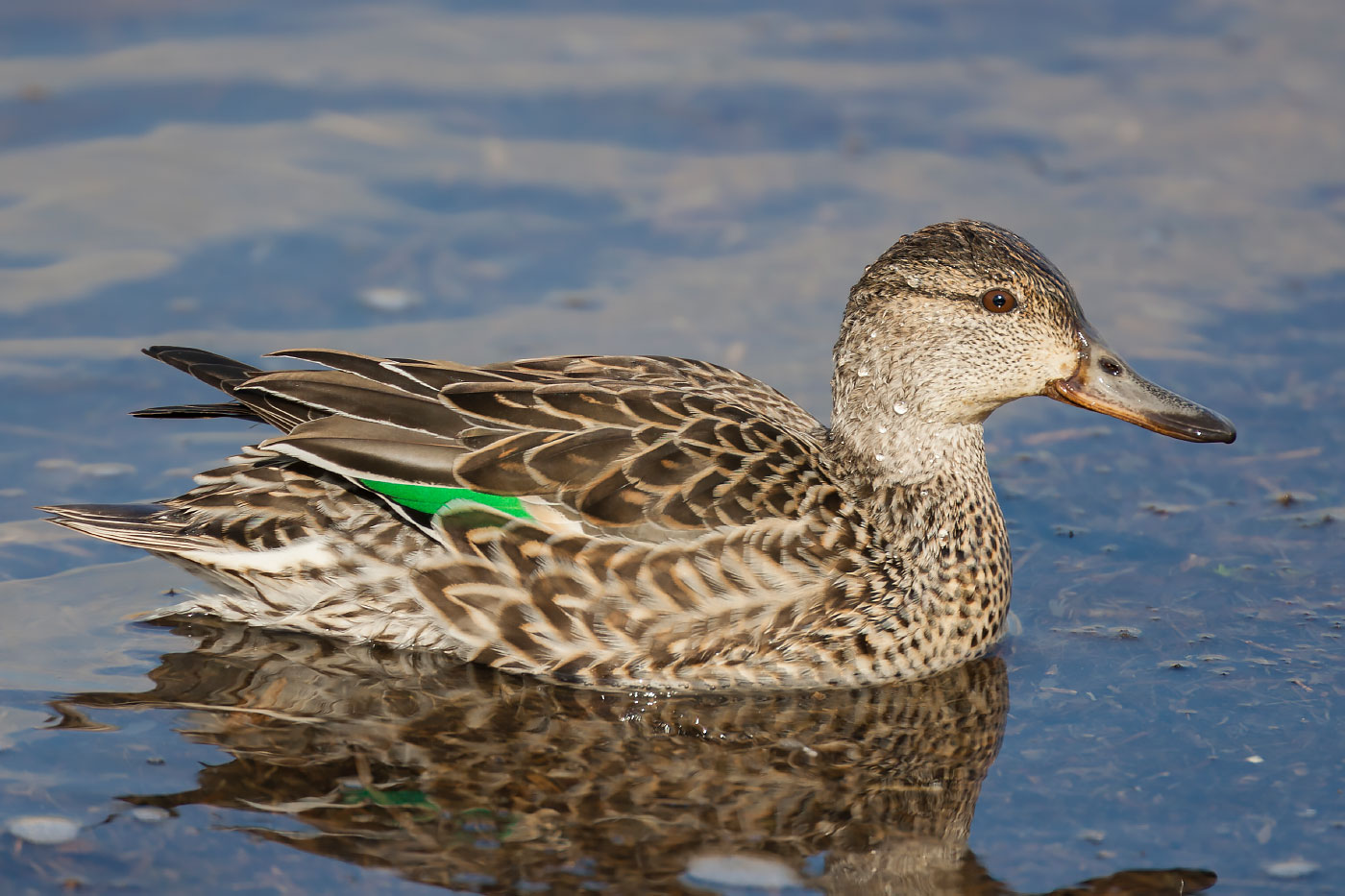 Eurasian Teal (Chew Valley Lake, Somerset, 6 March 2005). This female Eurasian Teal looks typically small, short bodied and compact. There is a reasonably well-developed face pattern with a dark eyestripe, pale supercilium and plain-looking cheeks. Note also two key plumage features: a pale line at the side of the tail and a bright, shiny green speculum peeping out from the wing feathers (Oliver Smart). 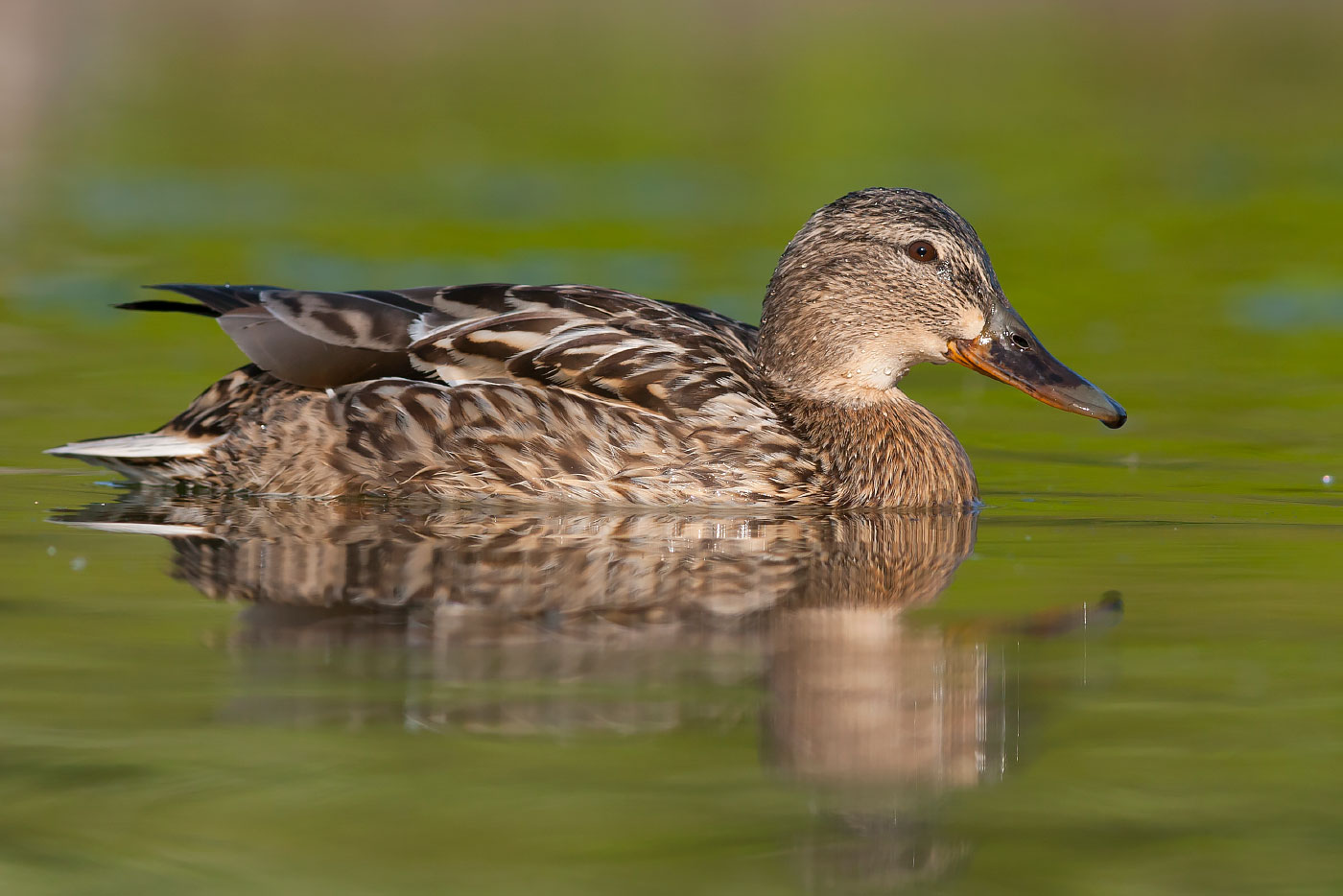 Mallard (site unknown, Germany, 23 April 2009). Female Mallards look a little 'anonymous', with a rather chunky 'farmyard duck' structure which lacks obvious elegance. The body is long and heavy, with the bill a little on the heavy side also. The characteristic blue speculum is not visible here, so pay attention to the weakly marked face pattern which includes a very faint 'loral spot' (Ralph Martin / www.agami.nl). 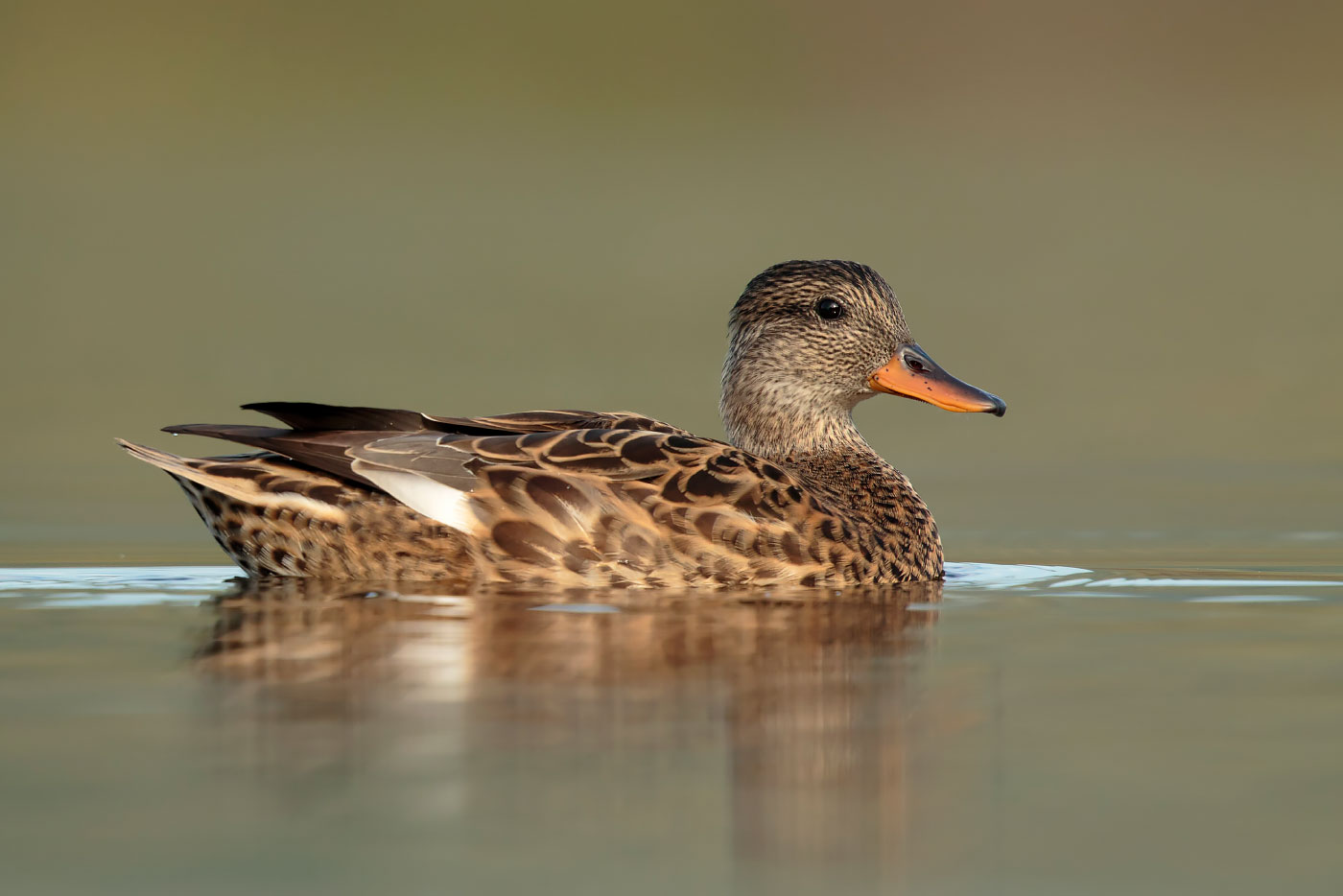 Gadwall (site unknown, The Netherlands, 3 October 2015). Female Gadwall are a little like Mallards, but are smaller and daintier and often look a little paler and greyer, especially on the face and neck. The real 'giveaway' here is the bright white secondary patch; this is not always visible but when it is revealed it is the key identification feature of this species (Walter Soestbergen / www.agami.nl). 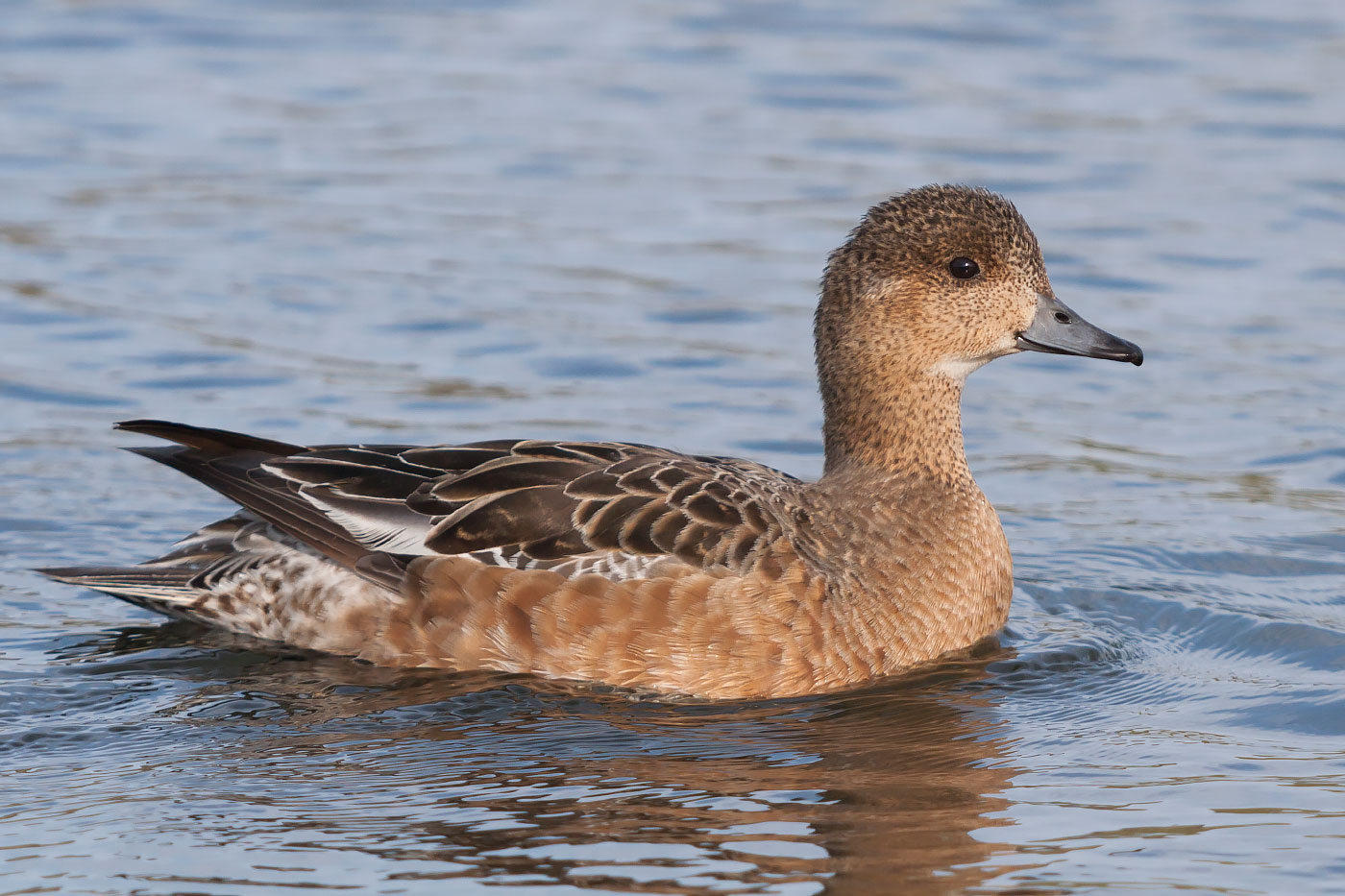 Eurasian Wigeon (site unknown, Iceland, 7 July 2007). Eurasian Wigeon are rather compact and short-necked ducks. This bird is stretching up its neck but it still doesn't look long necked. The grey bill is also rather short and petite. Note the plain-looking face of this female and in particular the overall rich brown and chestnut plumage hues (especially along the flanks) which are diagnostic of this species (Ralph Martin / www.agami.nl). 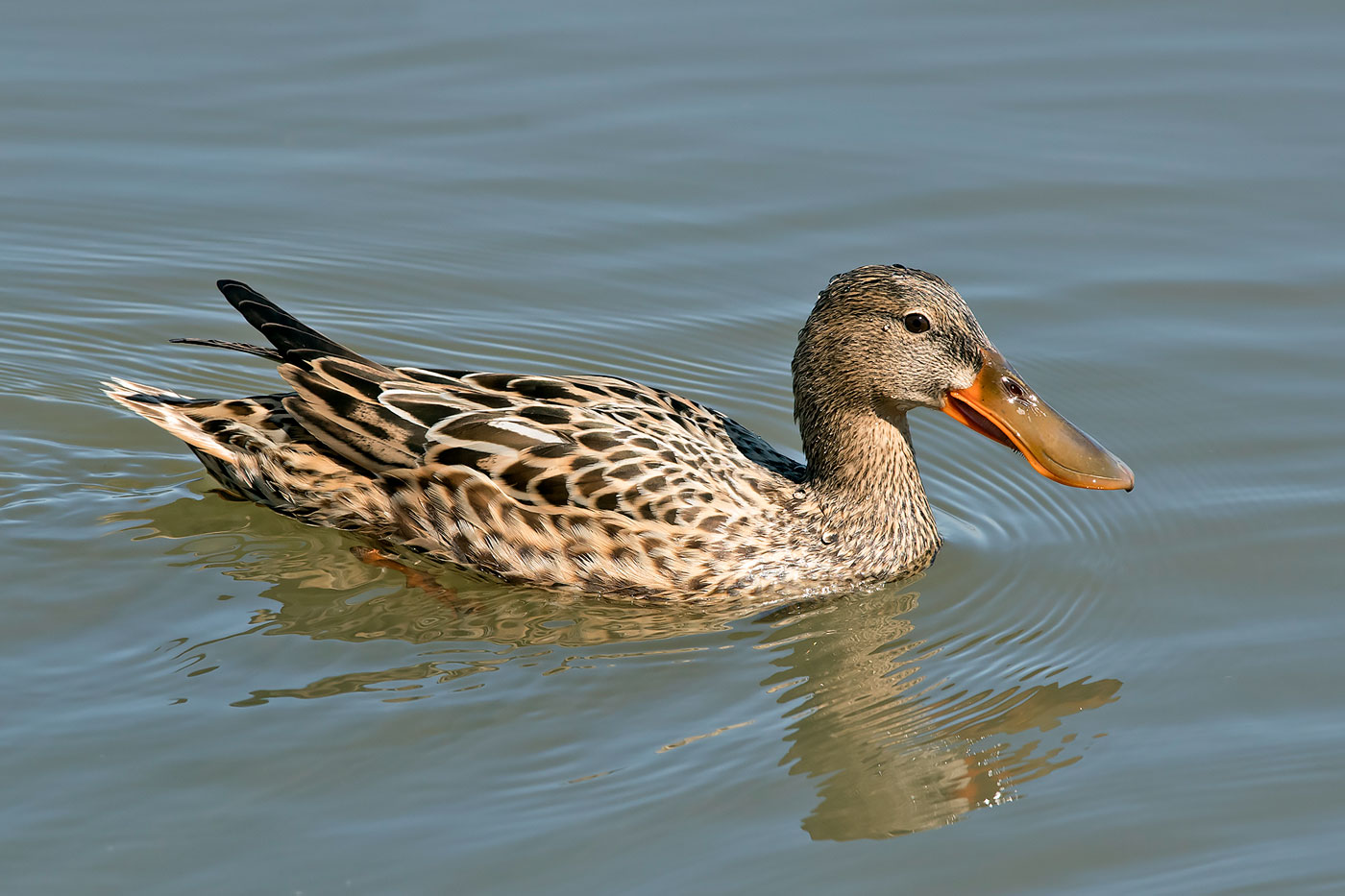 Northern Shoveler (Seaforth, Lancashire, 5 May 2018). The plumage of female Northern Shoveler is a little Mallard-like – although rather plainer faced – but note the obviously different and unique structure comprising a 'low in the water' front end, a strongly rounded head and the strikingly long and broad spatulate bill (Steve Young / www.birdsonfilm.com). 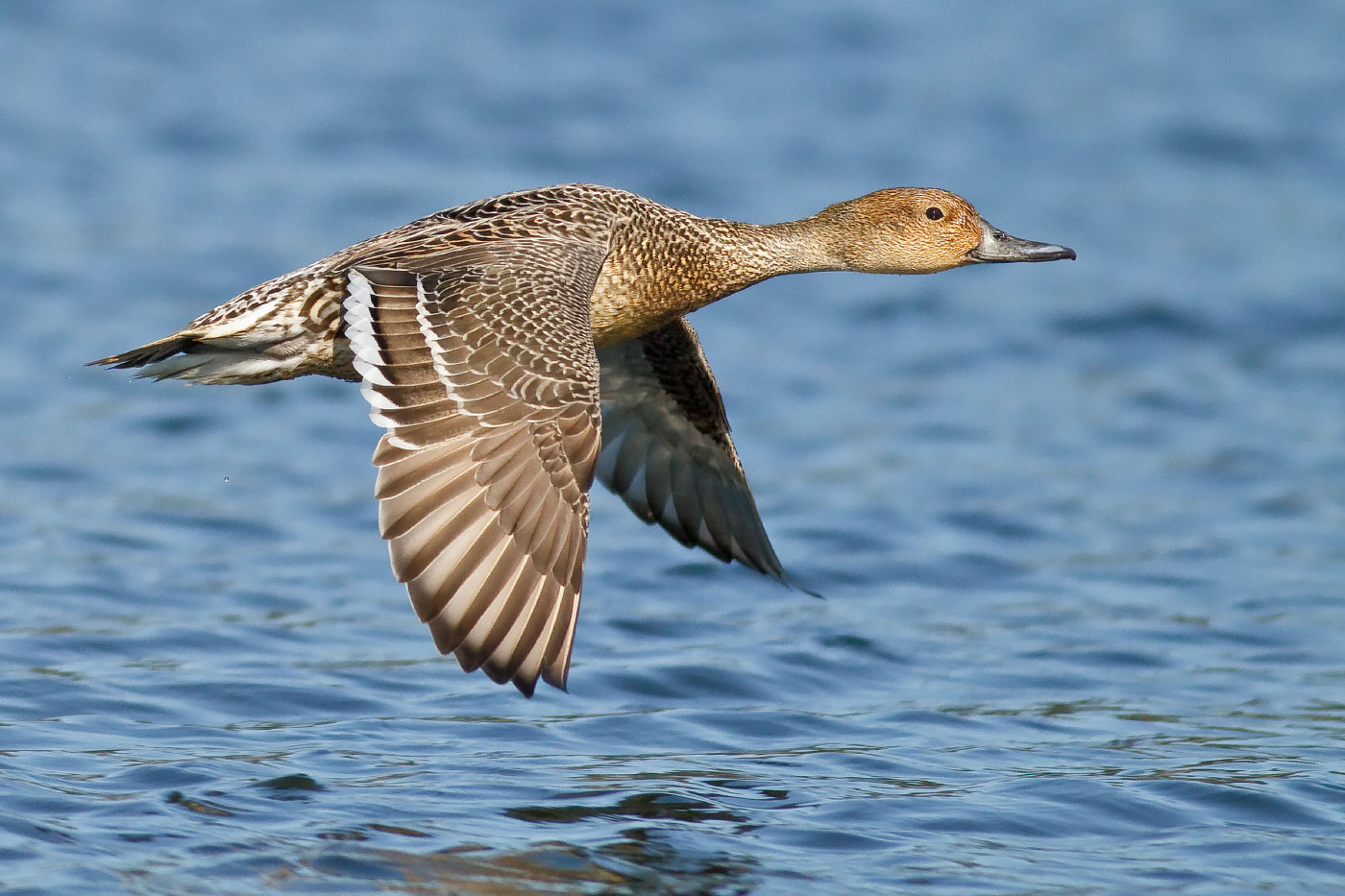 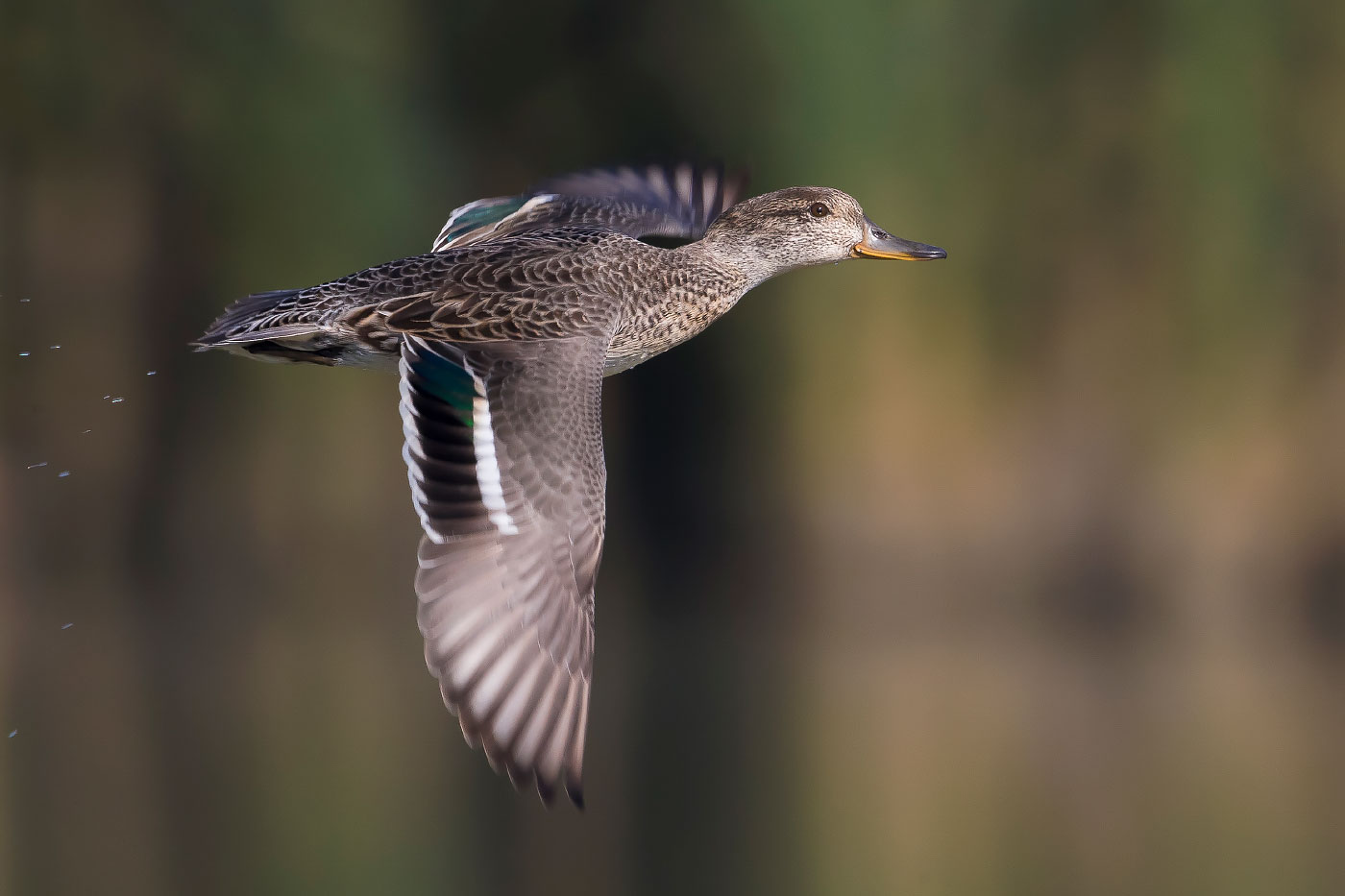 Eurasian Teal (Florence, Italy, 30 October 2014). Eurasian Teal look small, quick and agile in the air, almost like waders. Note on this female the rather plain-looking upperwing combined with a dark green speculum (which will appear brighter in different light), which is bordered by white above and below (Daniele Occhiato / www.agami.nl). 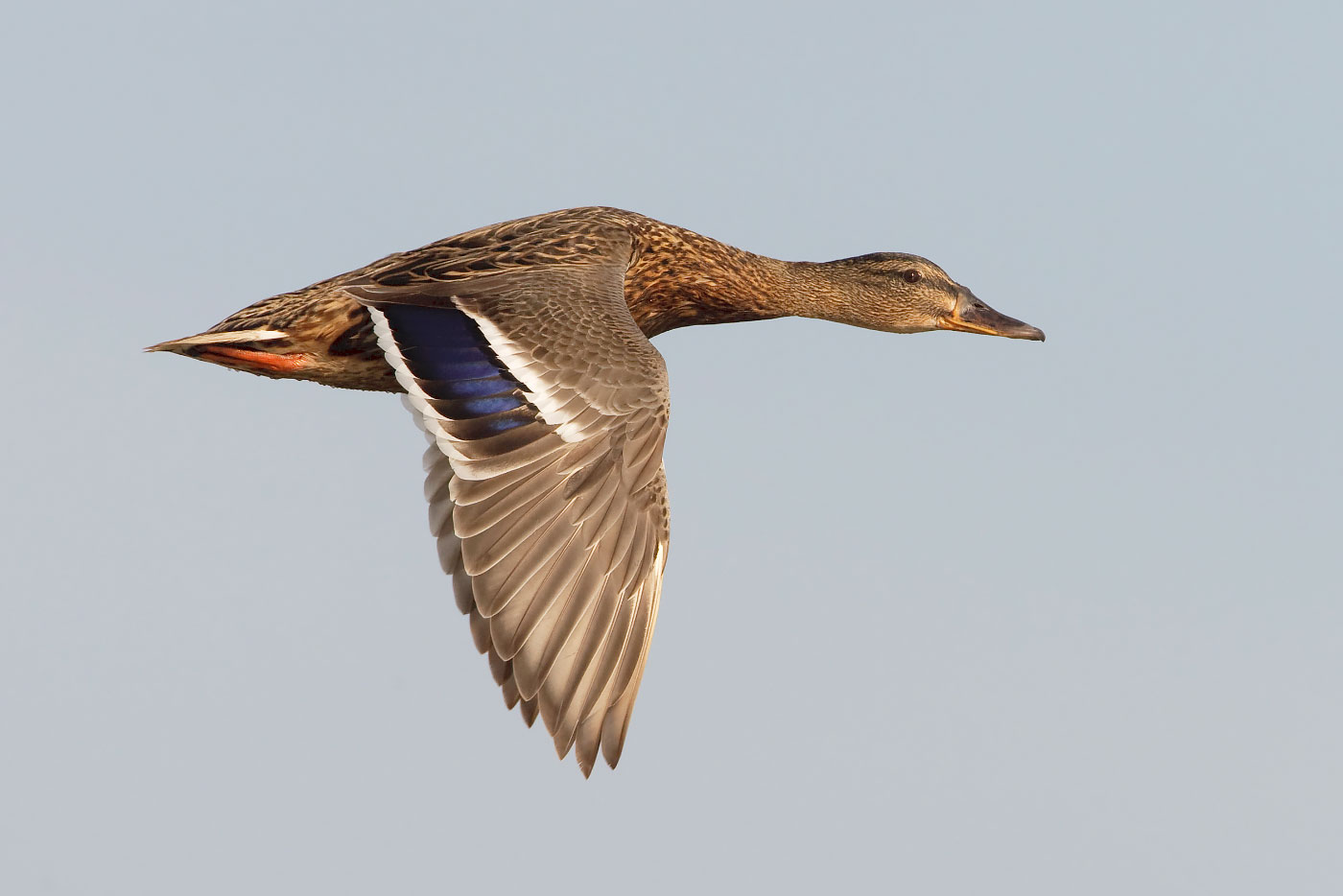 Mallard (Terschelling, The Netherlands, 10 July 2008). The somewhat ungainly structure of a Mallard is evident in flight also, the species looking both large and heavy. On this type of flight view of a female, note also that the speculum is glossy blue, sandwiched between bands of white (Arie Ouwerkerk / www.agami.nl). 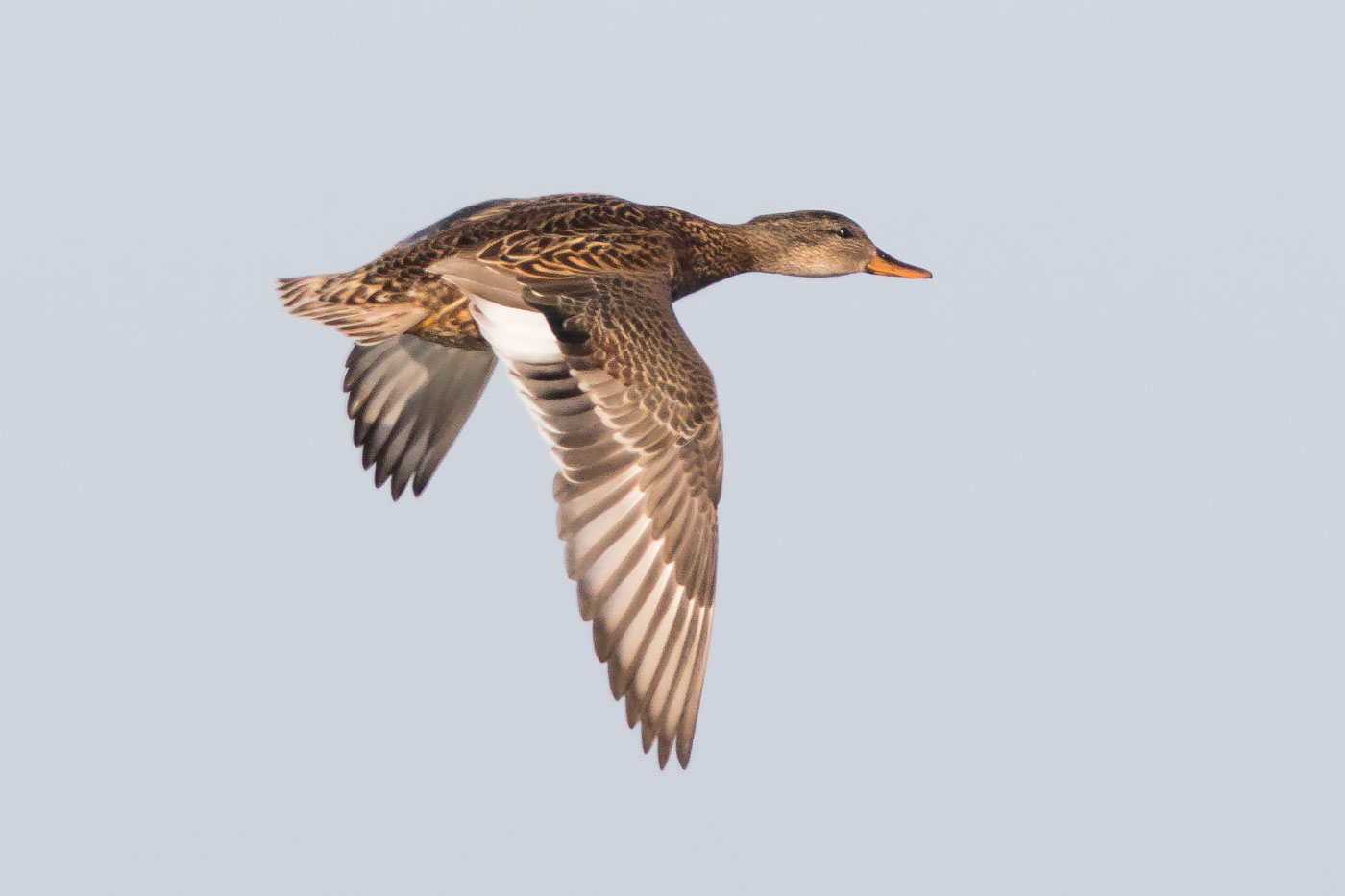 Gadwall (Den Oever, The Netherlands, 16 March 2015). Flying Gadwall look like a small and delicate version of Mallard, but the most obvious feature is always the prominent white patch on the secondaries. The extent of this varies according to the bird's sex and age but it is always present and a sure clue to its identity (Ralph Martin / www.agami.nl). 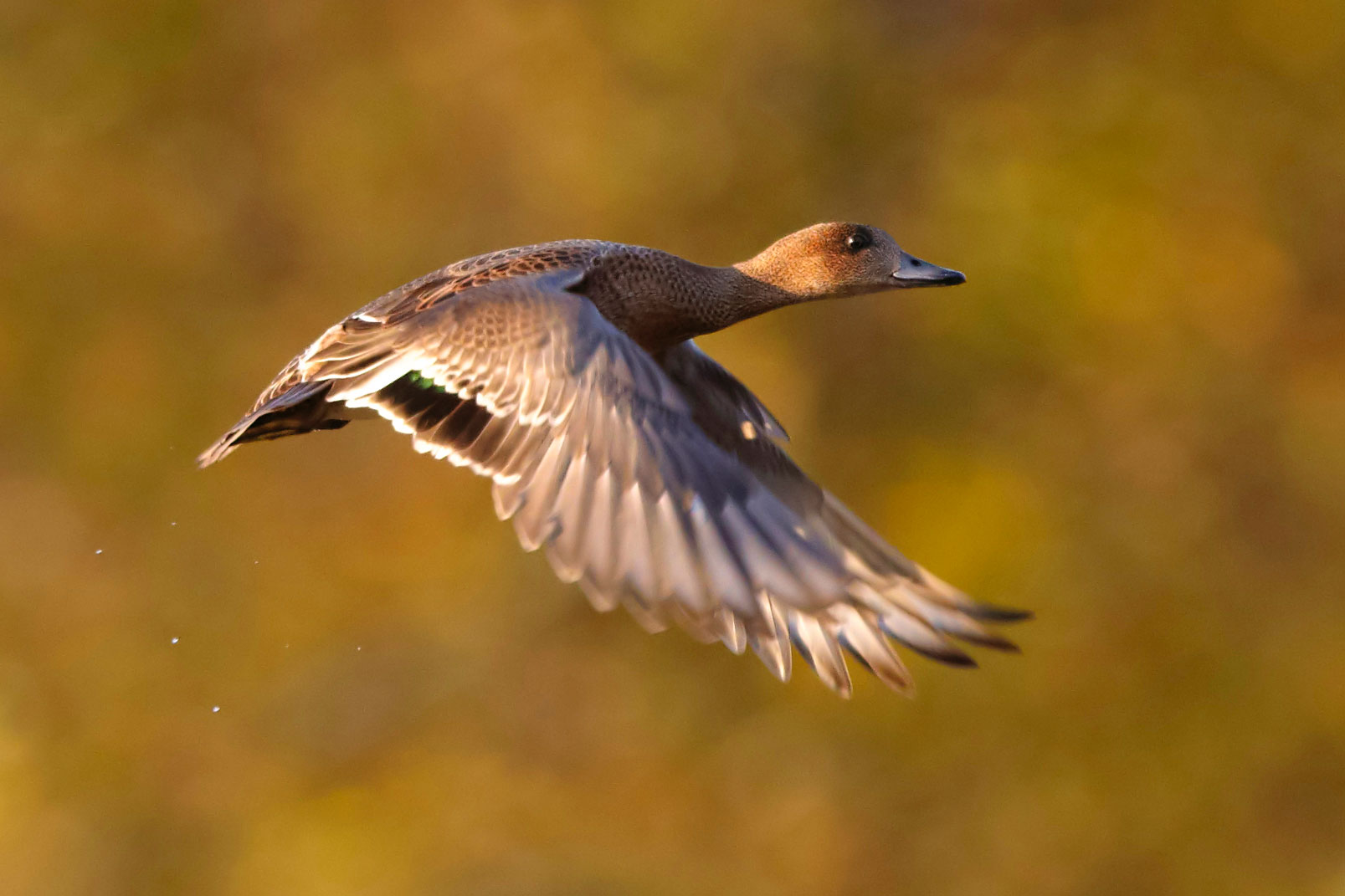 Eurasian Wigeon (Kirkkonummi, Finland, 10 May 2010). The upperwing of female Eurasian Wigeon in flight is a rather uniform grey with a white-bordered dark speculum. However, the most eye-catching plumage feature in flight (though sadly not captured here) is the well-defined white belly patch. As for structure, Eurasian Wigeon always looks rather compact and short necked in the air (Tomi Muukkonen / www.birdphoto.fi). 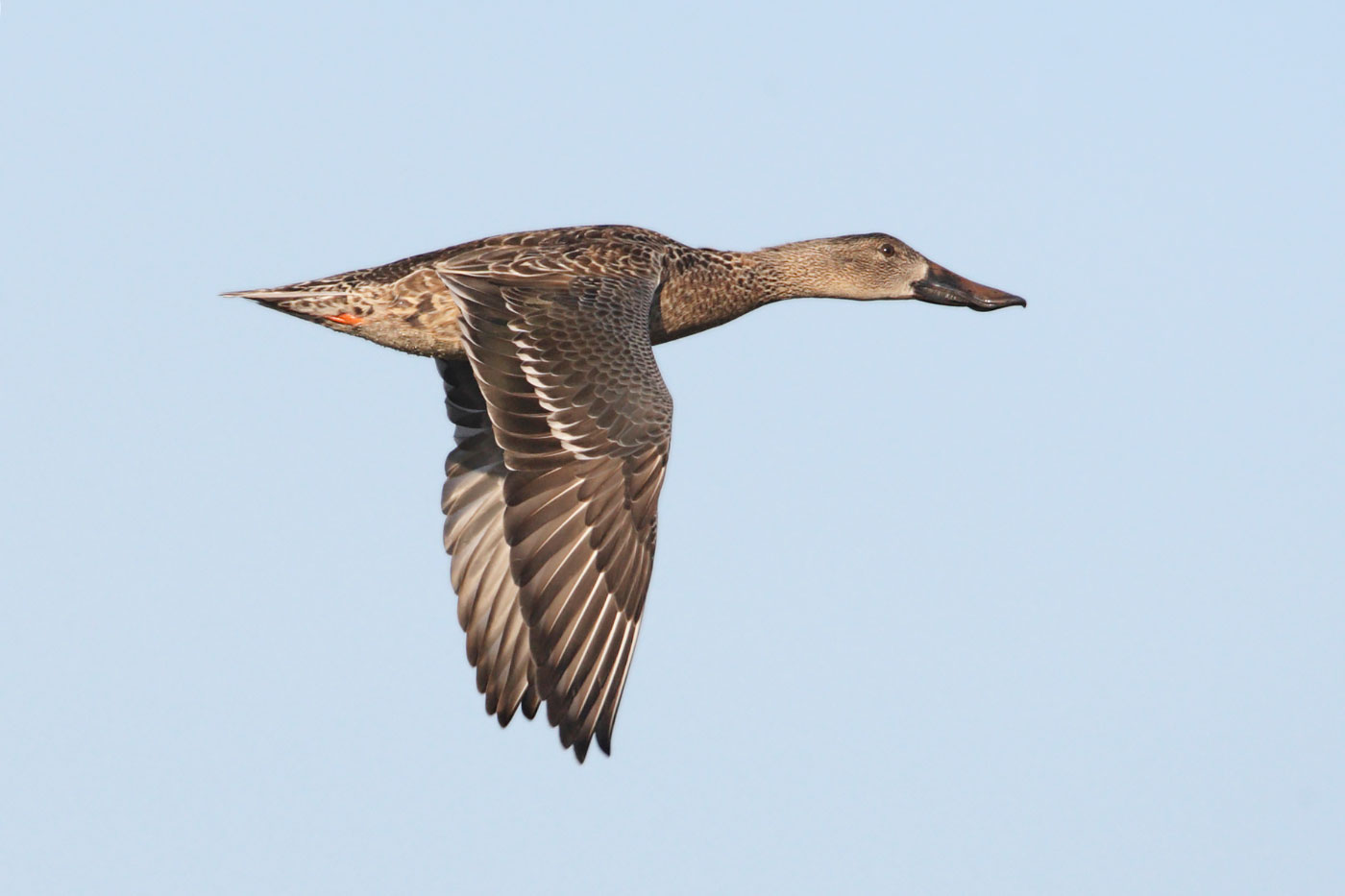 Northern Shoveler (California, United States, 19 January 2008). The wing pattern of this female Northern Shoveler is rather plain, with a uniform grey-brown forewing – in contrast to the pale blue of the males – and a dull speculum very narrowly bordered with white. However, it is always the bill which catches the attention, looking almost grotesquely long and broad and giving the bird a strangely 'front-heavy' appearance (Mike Danzenbaker / www.agami.nl). 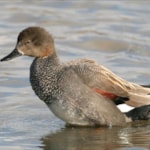 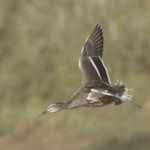 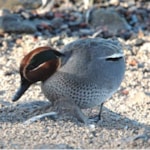 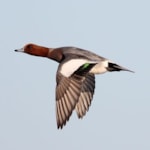 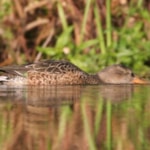 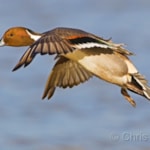