In September, I was fortunate enough to be invited to attend a feeding station for vultures in the Aude department of France. The activity was instigated with European funds to assist Egyptian Vultures, which have declined greatly in France; in the Aude region, numbers are down to only two or three pairs. In the UK, we're now used to attending feeding stations for Red Kites and we know just how spectacular this can be. Obtaining food for vultures is a bit more challenging logistically, but nevertheless possible.

Vulture species have declined greatly in the Aude department over a number of decades, with Griffon Vultures not breeding in recent years. Things are now changing thanks to Ligue pour la Protection des Oiseaux (LPO) and their local members. I was taken to the site at Bugarach in the Corbieres by one of these people, Jonanthan Kemp, who is an Englishman living permanently in Limoux. The first act was to drive up a slippery track in Jonathan's van and lay out the food. This was in plastic containers and consisted of offal supplied by a local butcher. The grisly contents of stomachs and entrails has to be hauled out onto a specially prepared fenced off area ready for the birds.

Even as we descended to the watching area, Griffon Vultures were appearing. We met up with other enthusiasts and all lined up for the show. Egyptian Vultures have now migrated south but Griffon Vultures were coming in fast. Soon the feeding area was heaving with activity. We counted 86 Griffon Vultures squabbling over their smelly meal. Apparently up to 150 of this species can gather here. This herculean effort by LPO members has meant that Griffon Vultures too are benefitting and are now nesting in low numbers back in Aude. Although the birds can find food of their own, this activity has drawn them more permanently to the area so that nesting colonies can grow. Also, as with our Red Kites, in times of hard weather more first-year birds are able to make it through that first critical year.

The Egyptian Vultures come to food in summer and for a period now a single Black Vulture has also been turning up. Soon it is hoped to set up discreet feeding sites for the small population of Lammergeiers in Aude. All of this work will hopefully ensure that all European vulture species will once again grace the skies of this beautiful area of France.

If you are visiting this area and would like to enjoy this spectacle contact Jonathan Kemp at jonathan.f.kemp@wanadoo.fr. He can also find accommodation locally. 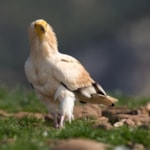 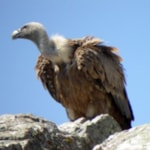