Continued from part one.

At the base of the Indian Himalaya is Corbett National Park. It feels almost African, with savannahs, jungle, stony rivers and steep hills. We jump into a jeep and, after bureaucratic formalities at the entrance, set off along the network of 'safari' trails. Our first stop is an education centre, where one of the big trees is fruiting. Here, more than 20 Coppersmith and Lineated Barbets climb crab-like along the outer branches, gorging themselves on the berries.

We push deeper into the shade of the forest and come to a halt in a damp hollow where a couple of other jeeps have stopped, their guides standing on their roofs peering into the shadows. After a few minutes of waiting quietly we realise that the jungle has fallen silent around us. There is a spine-tingling moment of suspense. Then, a deer suddenly barks close by, making me jump, and, almost too quick to see, a Tiger lopes across the trail behind us and disappears into the bushes. 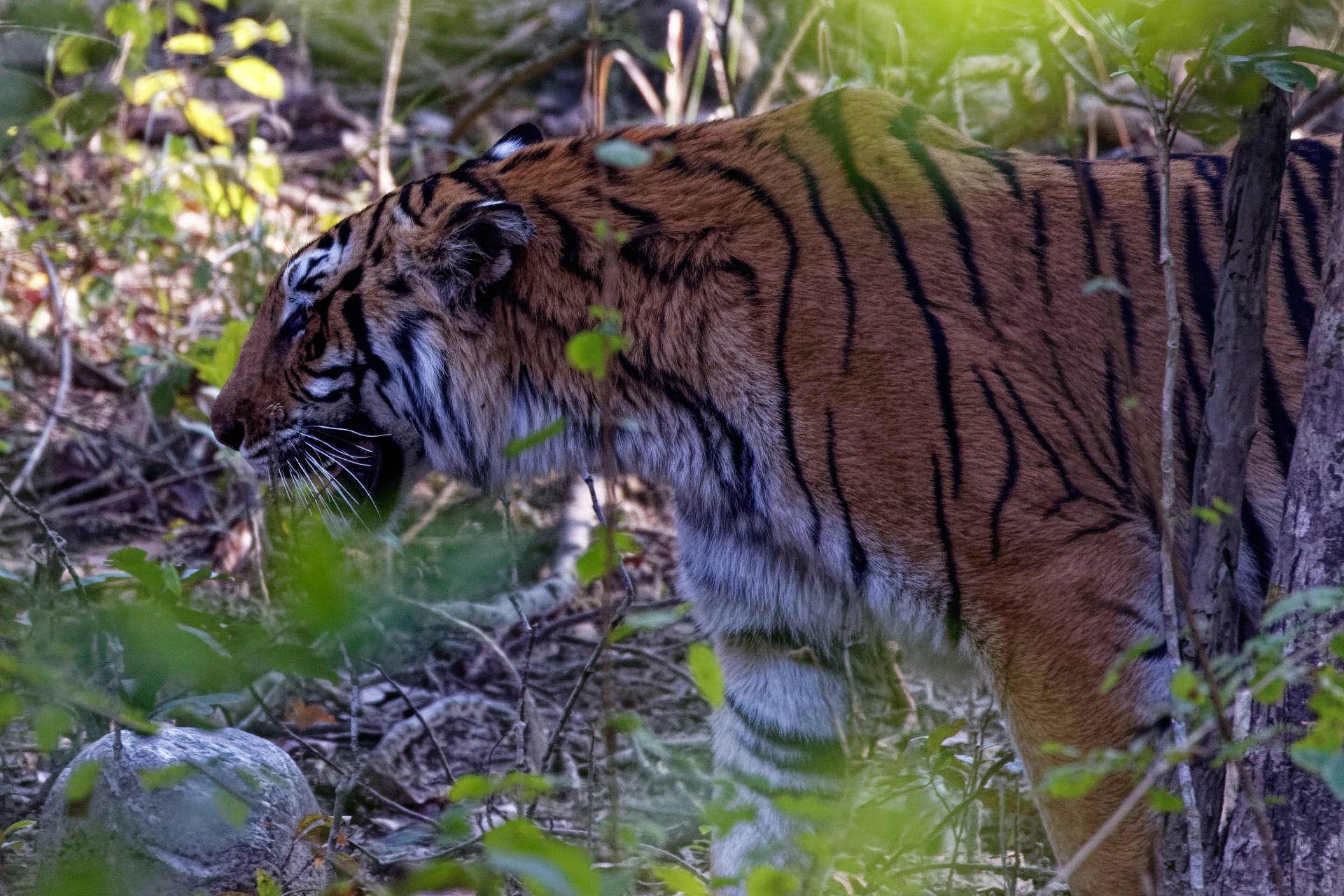 There is a realistic chance of a Tiger encounter in Corbett National Park (Rod Standing).

For a moment it reappears through the trees and, twisting round in my seat, I fire off some frames at ridiculously high ISO. I had not expected to be particularly interested in the big cats, but I have to say that seeing some real stripes was amazing. Tigers are not baited or tracked here, and Corbett is said to be the best place in the world to see truly wild Tigers.

Of course, the birding here is exceptional, too. Just by the edge of the park we watch a pair of Collared Falconets catching and devouring a succession of skinks. Falconets are the world's smallest birds of prey, barely larger than sparrows. They perch like shrikes on treetops for long periods, waiting for their chance, then sally down to the ground to grab their prey before returning to the perch to eat it. Not a sight for the squeamish.

In between the snows of Chopta and the jungles of Corbett, the habitat varies with altitude, each level with different ecologies and bird communities. At 2,000 m, the mountain village of Pangot is slightly lower than Chopta and perches in a saddle above Nainital surrounded by forest. In places the trees give way to steep grassy slopes, which are the home of Cheer Pheasants, but despite long periods of scanning we do not see any. 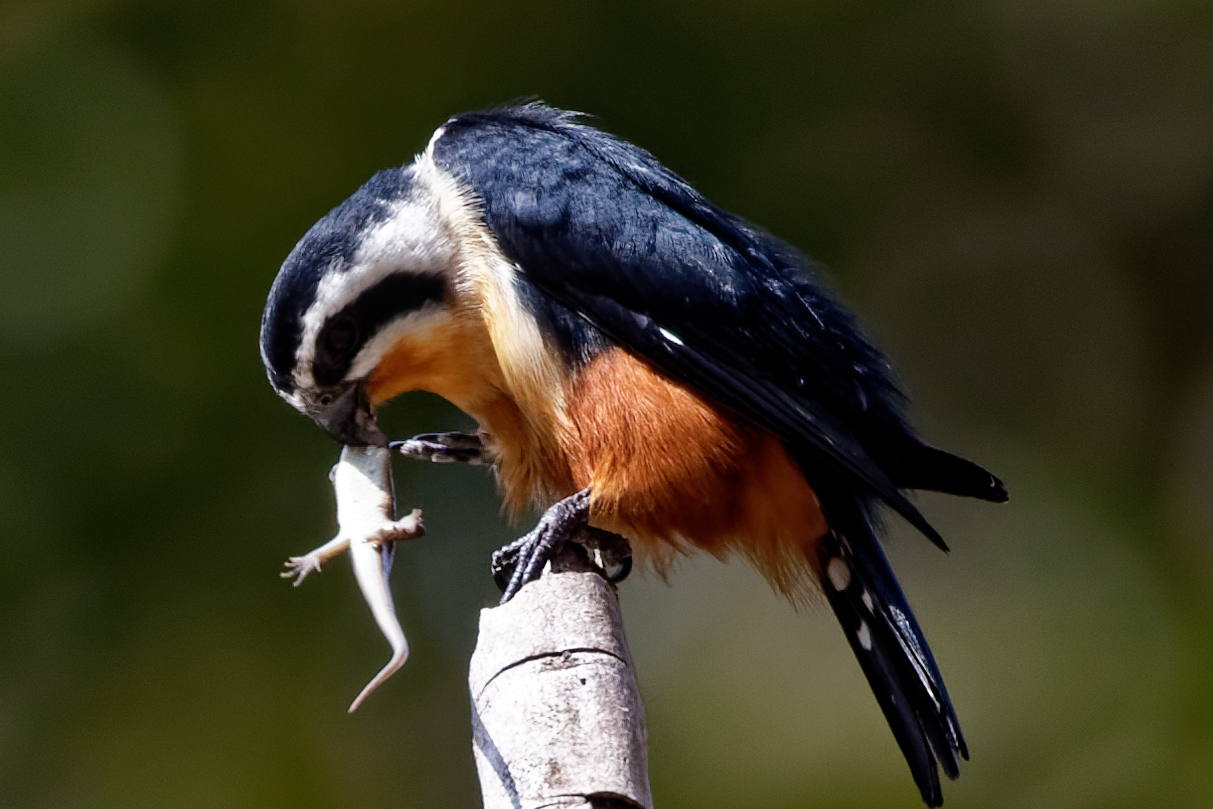 The hospitality at the fabulous Jungle Lore Birding Lodge more than compensates for a lack of pheasants – rich tasty curries washed down with beer in front of a crackling wood fire, and then hot water bottles to take the chill off the sheets in the timber-built lodge. The garden of Jungle Lore is planted on former terrace fields to give mouth-watering opportunities to see and photograph common species. The owners have built bird baths and seating and they put out water and nuts to tempt the birds, which have to be quick to beat the monkeys who also wait expectantly.

There is a hide but it's not really necessary – if you just sit still with your camera the birds will soon appear, just a few metres away. Black-headed Jays, Rusty-cheeked Scimitar Babblers, Chestnut-crowned Laughingthrushes and a Golden Bush Robin put on a dazzling show for us in the slanting late afternoon sun, but the star turn is a Spot-winged Grosbeak ponderously peeling cherries and cracking the stones with its immense bill in the lower branches of a cherry tree by the lodge. 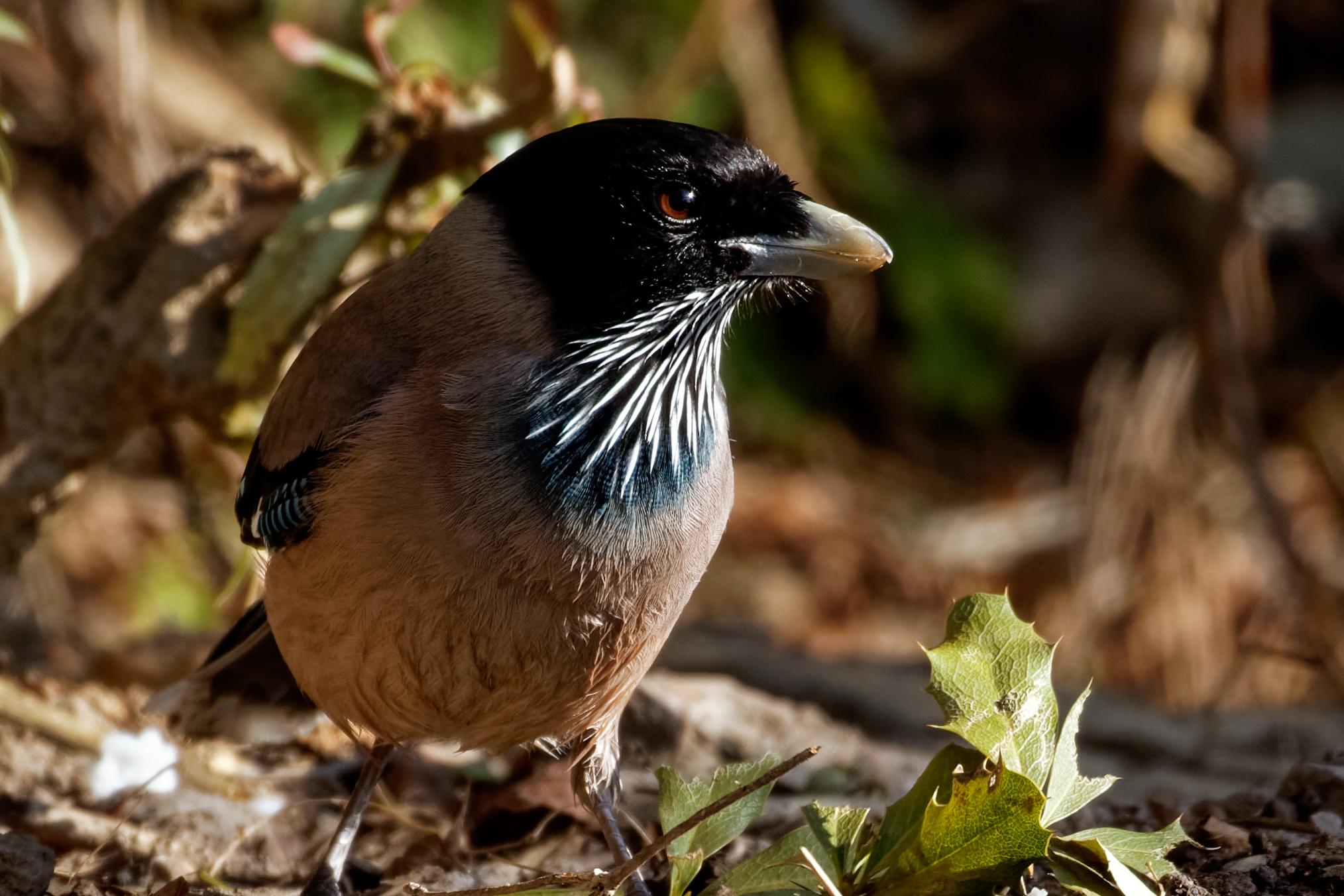 Tal means lake and 30 km south-east of Nainital lies Sat Tal, which has seven lakes – the 'Lake District of India'. The hills here are lower and the lush forests contain towering trees festooned with vines and ferns. We start at dawn at the hide above Garur Tal, surrounded by thick woodland teeming with birds. Many are attracted by the fruit, nuts and rice left for them. First some Slaty-headed Parakeets come to inspect the fruit, cocking their heads and clambering curiously along the branches. Quite quickly they fly off with a screech, leaving the stage set for the next act. 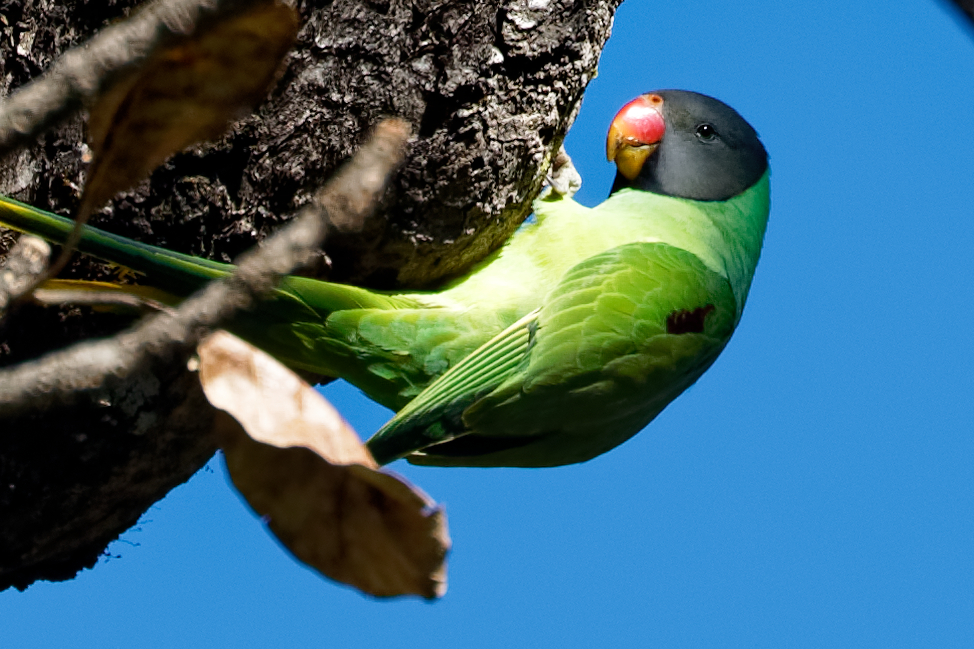 White-throated Laughingthrushes are even more engaging than the parakeets. Initially, ones and twos fly distantly between the further bushes, but they keep hidden. Then, suddenly, 10, then 20, and then 30 appear all together as if from nowhere and descend on the fruit. For a moment they all freeze, then as one they emit a loud chattering for two seconds, fall silent simultaneously and attack the fruit – a whirling, jumping mass of white-bibbed attitude.

We walk slowly down the Sat Tal Road from the hide all the way to Sat Tal Lake, the morning mist melting away in the warm sunshine. Looking out horizontally from the road into the tops of the down-slope trees enables Mahesh, with his super-sharp eyes, to point out some small canopy species: a Black-throated Sunbird, a brightly coloured Orange-bellied Leafbird, a diminutive Fire-breasted Flowerpecker and a Speckled Piculet, a woodpecker smaller than a sparrow.

We pick up other classic Himalayan birds along the way. Many green-blue Great Barbets are loafing in the trees, some giving their far-carrying wah wah wah calls. At least 50 Red-billed Leiothrix – small, ridiculously colourful birds – dart between roadside shrubs. As we loiter watching them in the hot sun, a White-browed Scimitar-Babbler hops up to pose for photos, as does a Grey Bushchat.

And we have not yet even seen the main reason why birders come to Sat Tal. Deep in a shaded valley near Bhimtal we walk beside a boulder-strewn stream, limpid pools linked by rushing rapids. A footbridge spans the streambed, and we scan up and down. In addition to the now familiar redstarts, there are other birds of mountain streams – a Brown Dipper, black in the shadows, and a Rufous-gorgeted Flycatcher, bright as a jewel in the sun one moment, the next lost in the shade. And then, at last, the bird we have been seeking – a forktail (in this case Slaty-backed) darting between the stones and picking up insects. Like a wagtail on steroids, it comes closer and closer, spreading its tail wide as it flutters from one rock to another. One of the most magical moments in a trip with many special encounters. 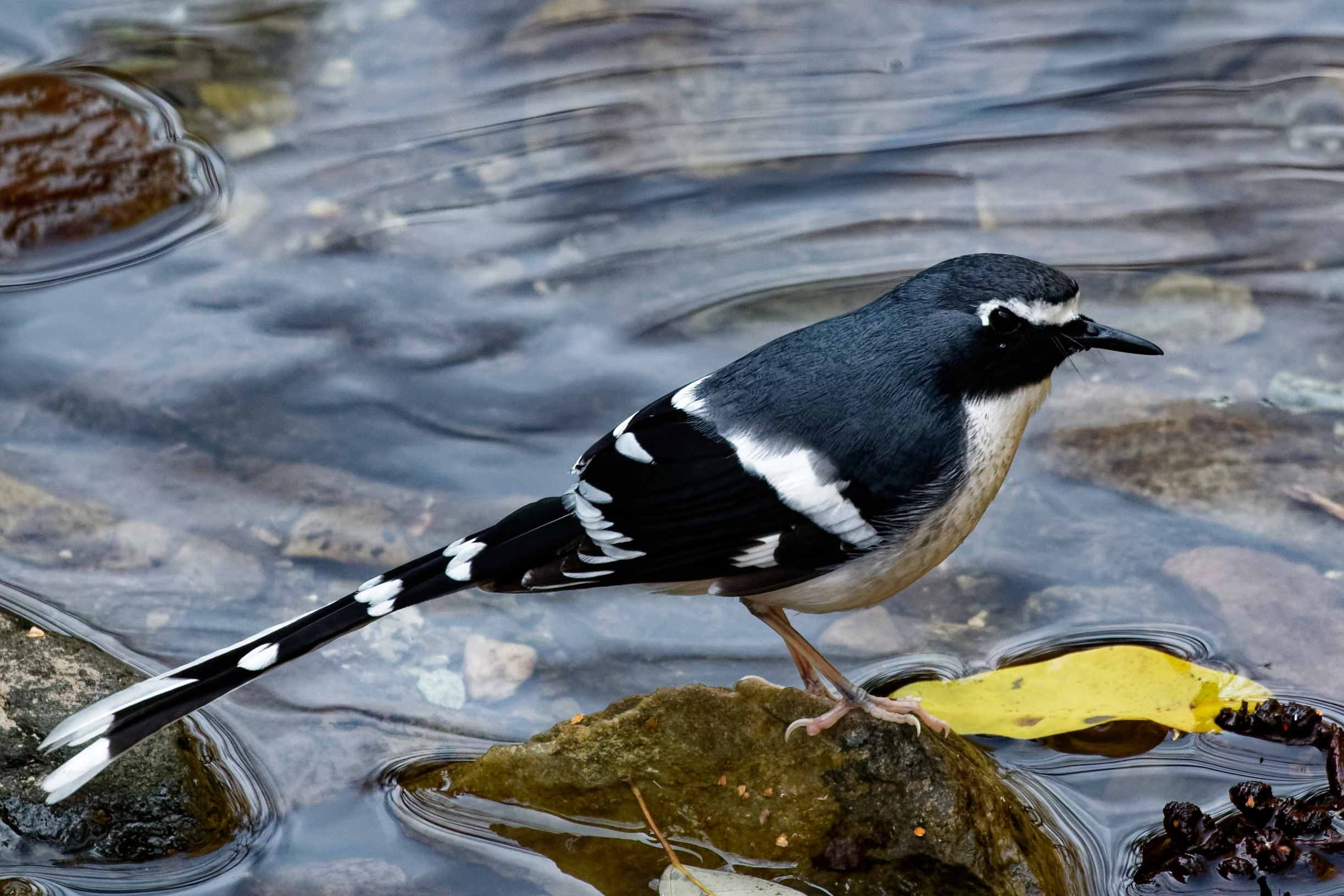 This Slaty-backed Forktail was one of the highlights of the trip (Rod Standing).

The setting sun withdraws behind the hill above us. The light drains from the scene and the air cools. As we turn to go, Pawan suddenly grabs me by the arm and points.  "There!" he hisses excitedly as he gestures at a log down by the water's edge. In the gloom I can make out a tiny bird agitatedly flicking it wings. The scales on its underside are clearly visible: a Scaly-breasted Wren-Babbler. Miraculously, it stays out in the open, twisting and jumping in all directions, while I fire off some hopeful shots. The images are not the best, but nevertheless we are delighted to have seen this legendary skulking species.

Though we encountered many families of birds during the 13 days of our trip, it is the sheer variety of passeriformes that wowed us most. In total we saw 17 chats/redstarts, 11 woodpeckers, nine flycatchers/niltavas, nine tits, nine warblers, eight thrushes, seven finches, six each of bulbuls, laughingthrushes and jays/magpies, five each of prinias, barbets, wagtails and pipits, four each of parakeets, drongos and sunbirds and three each of shrikes, fantails, babblers, scimitar-babblers, nuthatches, forktails and accentors. It is possible to see nearly 500 species in a trip to India, but we preferred to be quite measured, taking time to photograph and enjoy the birds, and seeing 'only' 270.

For me, the Himalaya are about much more even than birds. Back at Chopta, we lace up our boots for the long climb to the Tungnath temple, on one of northern India's most sacred peaks. Handmade stone steps zig-zag up the slope to guide pilgrims, but with more than a metre of snow beneath us we rely on the footprints of others to find the way. The sun is hot and dazzling, the air thin and cold. 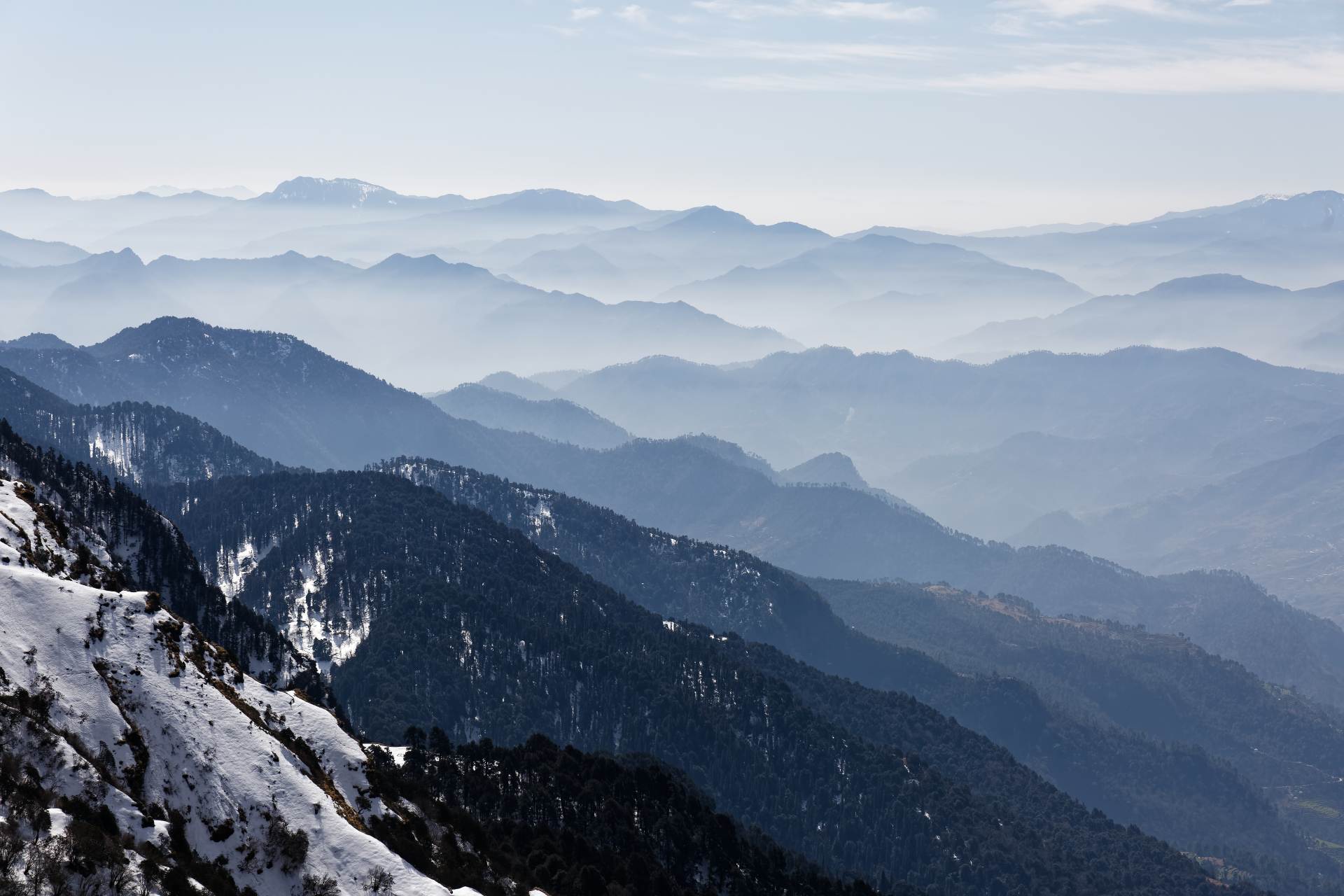 Himalayan Monals are everywhere, patiently pecking at patches of earth beneath the scattered pines. After two hours' climb, we stop, gasping for breath, by a refuge hut. The melting ice crust beneath our feet is ever more treacherous, and this is far as we can go, but I am not downhearted. Looking north, I see the black and crystal white mountains seeming to touch the heavens. Turning, and raising my eyes to the south, I see the hills roll away into the blue distance and an ecstatic happiness wells up in me.

I now feel so lucky to have been in the foothills of the Himalaya, to have trodden the snows of Tungnath and to have watched the most beautiful bird I have ever seen, just before the pandemic changed our lives. We may not be able to travel at the moment, but I know that the mountains, the forests, the streams and the valleys are still there. I know that the monals will still hear the Mistle Thrushes singing in the spring. And I know that as I walk in my local wood in London, I will hear the same strident notes echoing between the bare trunks. As I sit on my balcony, I will still hear the Grey Wagtails calling across the rooftop of our block of flats. More than ever, I know that amid all the doubt and despair if we only look up, we can find birds, and beauty, wherever we are.