Over the weekend of 28-30 August 2020, a group of Spanish and Dutch birders visited the seawatching hot-spot of Estaca de Bares in Galicia, north-west Spain, and went on to enjoy some of the best seawatching one could dream of encountering in the Western Palearctic (WP).

Here we detail that weekend, as well as summarise why Estaca is a top seawatching spot in Europe. 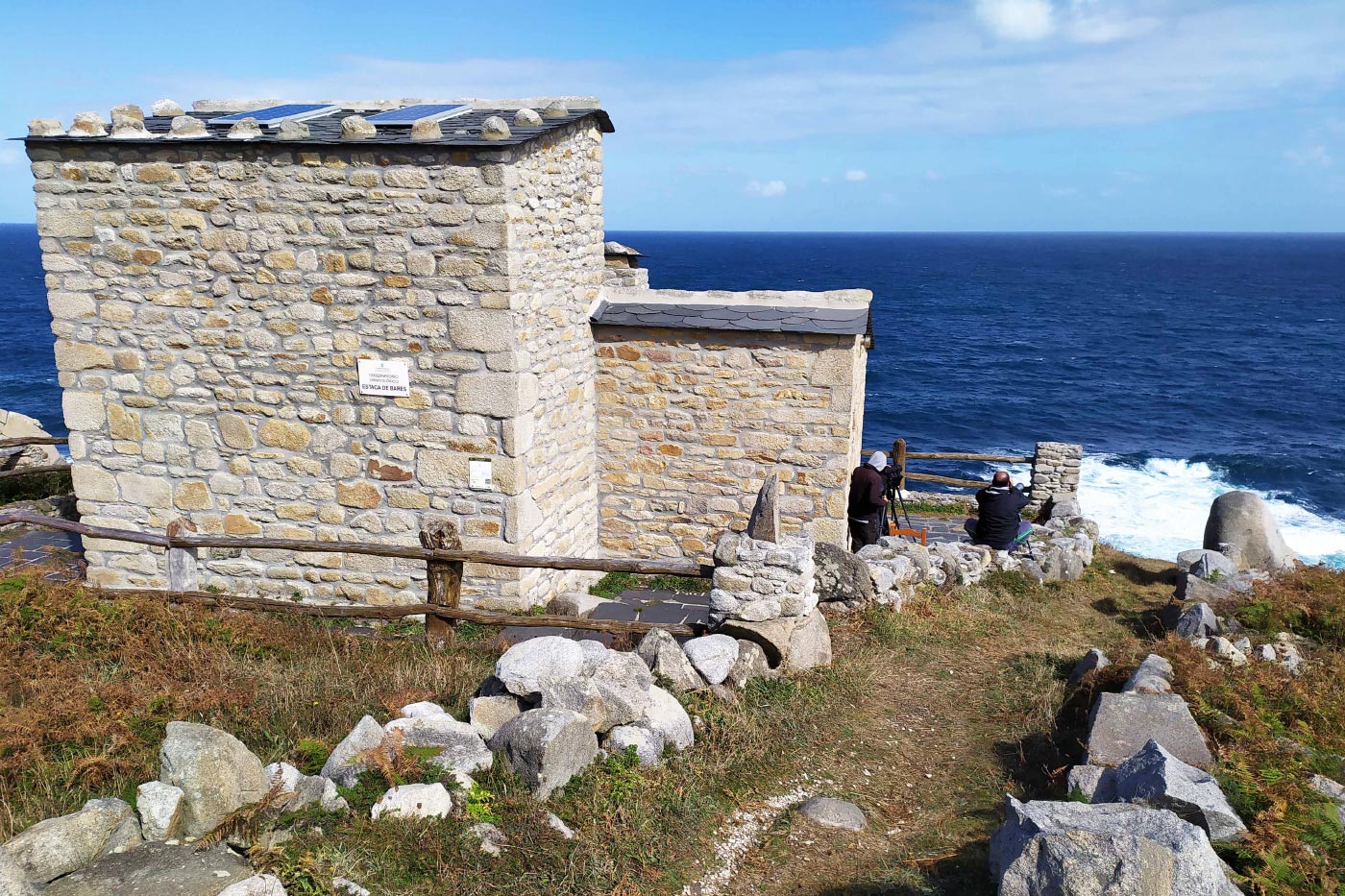 Seawatching is conducted from the ornithological station at Estaca de Bares, just a few hundred metres from the lighthouse (Antonio Sandoval).

Estaca de Bares, in the province of A Coruña (Galicia; 43°47'25″N 7°41'16″W) is the northernmost headland in Spain ('estaca' means stake/peg, making reference to the particular shape of the headland). Its location, in the extreme south-west of the Bay of Biscay, makes it ideal for observing the seabirds that leave this vast area of the Atlantic during their migrations and movements. This includes various pelagic species, pushed towards the coast by the frequent westerlies.

The first studies of seabird movement at Estaca de Bares took place in the 1960s, when several Belgian and British teams worked for a few weeks of several years. Three decades later, a Spanish team started a study that is still ongoing today. Thanks to their work (Sandoval, 2015), we know that close to 1.5 million seabirds pass this headland every year, most of them in autumn and winter.

Noteworthy among them are the tallies of skuas, shearwaters and terns, as well as those of Northern Gannet, Common Scoter, Kittiwake and alcids. Hundreds of Long-tailed Skuas (511 on 5 September 2011), Sabine's Gulls (720 on 25 September 2019) and Grey Phalaropes (893 on 19 August 2013) have been recorded in single days. Furthermore, thousands of Pomarine Skuas (2,520 on 12 October 1997), Great Shearwaters (more than 16,000 in just three hours on 14 November 2017) and Sooty Shearwaters (8,555 on 7 October 2011) sometimes pass, as well as tens of thousands of Manx Shearwaters. It is also the headland in continental Europe with the highest number of records of Fea's-type Petrels (80 in the past decade).

These numbers led to the sea around Estaca de Bares being declared a Special Protection Area (SPA) under the European Union Directive on the Conservation of Wild Birds in 2015.

If you want to learn more about this fantastic place please visit: www.seawatchingestaca.com 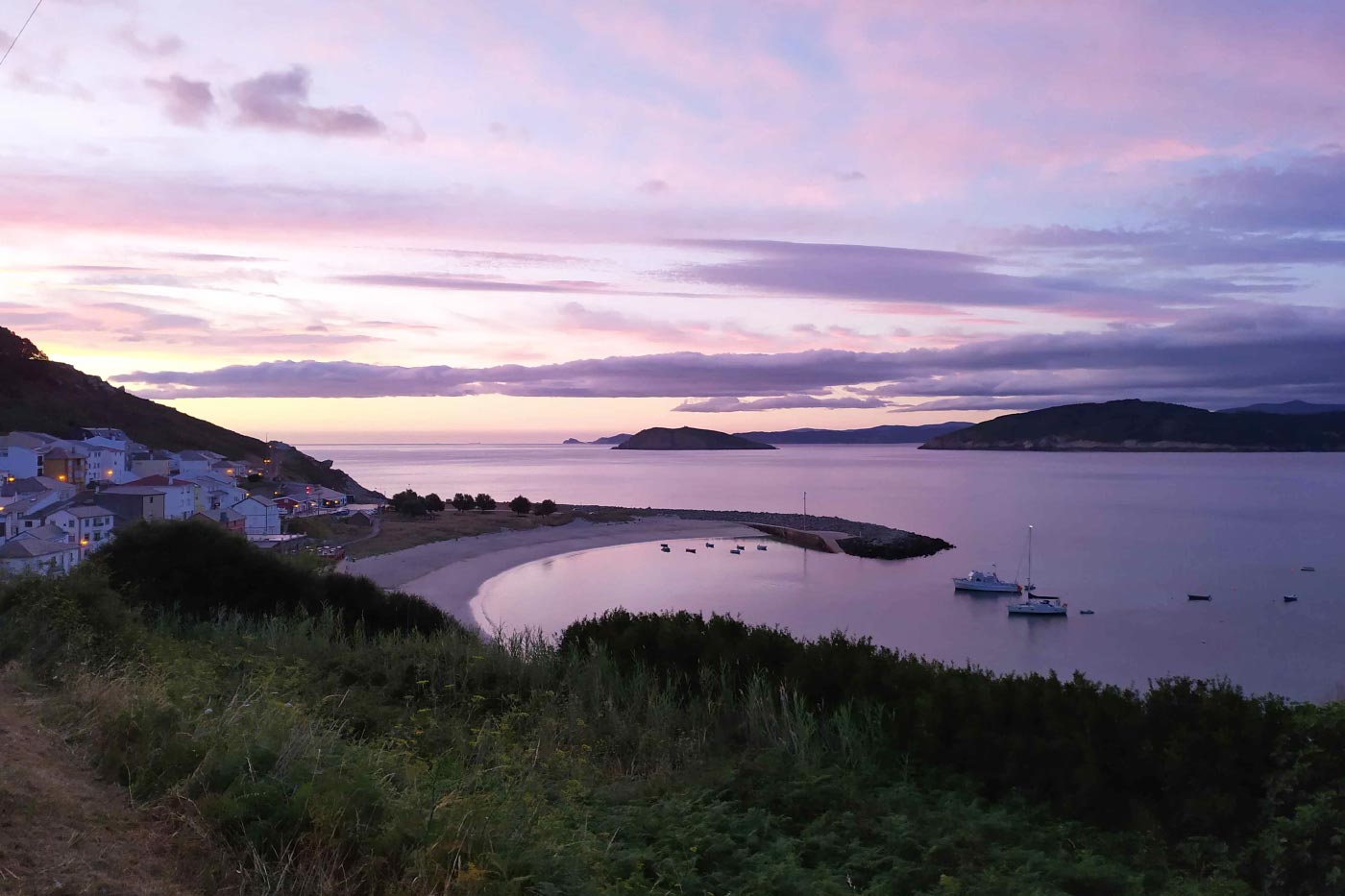 The nearby village of O Porto de Bares is a picturesque place to stay when seawatching at the nearby headland (Daniel López-Velasco).

In the days prior to the extraordinary weekend, strong south-westerly winds whipped across the broad mouth of the Bay of Biscay between Galicia and southern Ireland. This led to a halt in the southward movement of numerous migratory species (Common and Arctic Terns, skuas and Manx Shearwaters, for example), as well as the displacement of large numbers of birds from their favoured feeding areas off the west coast of Galicia. For example, at dawn on 20 August, no fewer than 1,300 Sabine's Gulls were counted from Cabo Touriñán, 100 km south-west of Estaca de Bares. Two days later at Estaca we counted 184 Sabine's, plus 293 Pomarine Skuas and more than 1,000 terns, as well as the first Fea's-type Petrel of the season. For the next five days the winds continued to blow from the south-west, only to suddenly change to the north-west on Friday 28th. It then slowly shifted from north-west to north-east throughout the weekend.

Friday 28 August produced more than 340 skuas and 2,000 terns (the latter including five Roseate) were counted. In the evening, the second Barolo Shearwater of the season was observed (following the first on 21st). During dinner, we all predicted a very special day for the following day.

Then, during northerly winds on Saturday 29 August, the sea was full of birds throughout the day. Listed below are some of the figures that we counted over a 12-hour watch:

Throughout that evening the wind lost strength. The next day, Sunday 30 August, dawned almost calm, but heavy rain fell several km east of Estaca de Bares. After a first hour with almost no birds, passage improved during the morning, but as the north-east wind increased, fewer birds were counted – 203 Great Skuas and more than 500 terns being the best numbers.

The petrel was first found and called out by Rinse van der Vliet on 29 August, who knew, as soon as he saw it, that he had something mega in front of him.

Size, structure, flight style and plumage details of this dark petrel, seen well by multiple experienced observers, from a fair distance and in good light, seem to be consistent only with Great-winged Petrel.

Key features seen that helped us rule Trindade out included:

Given the occurrence of a White-chinned Petrel in Scotland this spring (see here) and further possibles in Shetland and Norfolk in recent weeks, this species was also considered (both in the field and subsequently). However, we feel that White-chinned, which we are very experienced with, can safely be ruled out on the basis of size and structure (it's a much bigger species and the Estaca bird showed no obvious pale bill and lacked silver on the underside of the primaries).

Separating extralimital Grey-faced Petrel, from New Zealand, under these circumstances is admittedly impossible. However, Grey-faced is restricted to New Zealand waters, and we don't think it's a realistic or reasonable option to even include it as a possibility, the same way Campbell Albatross is not considered when dealing with Black-browed Albatross sightings in Europe.

We are well aware of the rarity of this sighting – a first for the WP – and that without photos, some might either not believe it or might feel it's not safe to identify it as such. However, most of us seawatching on the headland over the weekend have plenty of experience with all Atlantic and Southern Ocean tubenoses, including Great-winged Petrel. We feel the identification is certain, as all features were properly seen. Given it was observed by numerous very experienced birders, we think it's worth submitting the record for assessment, and a description has already been submitted to the Spanish rarities commitee for review.

The bird may ultimately only be accepted as a 'dark petrel sp', which is understandable in the circumstances, despite all those present being convinced of the identification. Interestingly, Great-winged Petrel is featured in Flood and Fisher's North Atlantic Seabirds: Pterodroma petrels as a species to watch out for in the region.

With both Atlantic Yellow-nosed Albatross and White-chinned Petrel having been seen this summer in Europe, as well as records of Flesh-footed Shearwater in the Azores (see here) and Short-tailed Shearwaters in Ireland and France (see here and here), this was possibly the year to see it.

Just 18 hours after the petrel had passed, who'd have thought that another WP mega would have been possible? At 10.45 am on 30th, Guillermo Rodríguez shouted "albatross", and then "vamosss" (in the style of Rafa Nadal) and all hell broke loose!

Some chaotic moments followed and it took Dani Lopez-Velasco a while before he finally got on the bird, after first trying to see it through Guille's scope. Obviously we were all expecting a Black-browed Albatross, a species seen twice before at Estaca, so imagine Dani's surprise when he saw a mostly white underwing, reminiscent of the pattern of a Cory's Shearwater. The bird was mostly keeping low to the water and not arching much, so at first it wasn't easy to see the underwing – but then he started screaming in Spanish "white underwing, clororrinco [the Spanish name for Yellow-nosed Albatross]!!"

The dark bill was obvious, too. Some more chaos and yelling followed as some observers had still not got on the bird and it was quickly flying away to the west. Those people looked through others' scopes, which worked fine, while others who had just left the site a few minutes before found out and ran to the lighthouse, where they also got onto it.

Guillermo Rodríguez snapped a few random shots of the sea in the general area where the albatross was. When we checked them briefly in the field, we didn't find it on the screen and simply assumed it didn't show on the photos, and totally forgot about it. However, when Guillermo reviewed them at home a couple days later, he realised the bird was there, in the corner of the images. And not only that, but even considering the poor quality and big crop, all Yellow-nosed Albatross features that led us to identify it as such in the field were visible, too: a mostly white underwing, with the Corys-like thin dark leading and trailing edges, and a dark bill. 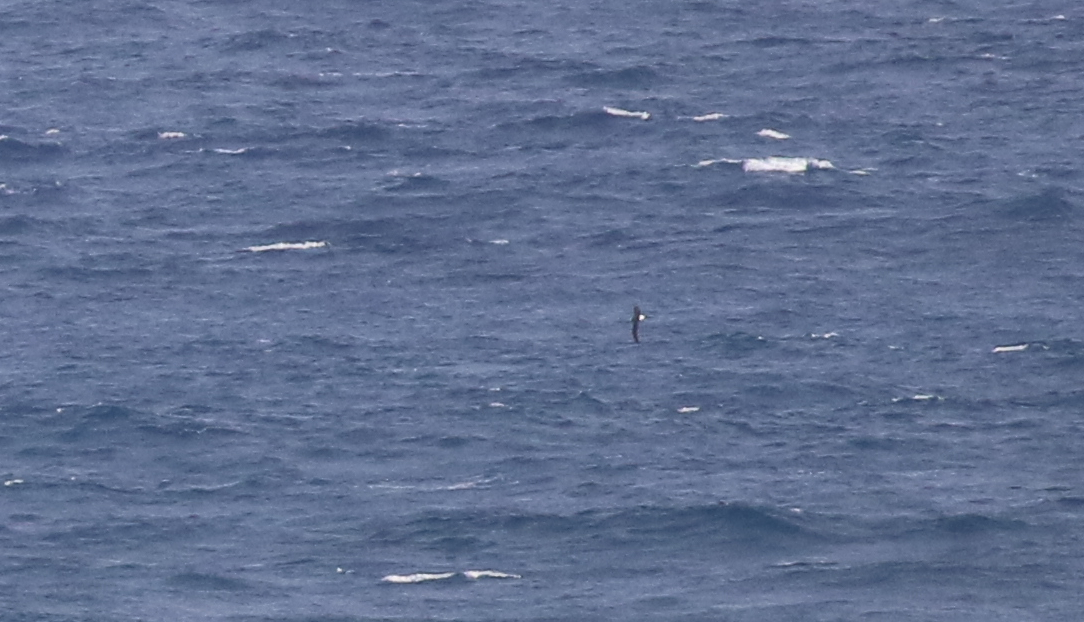 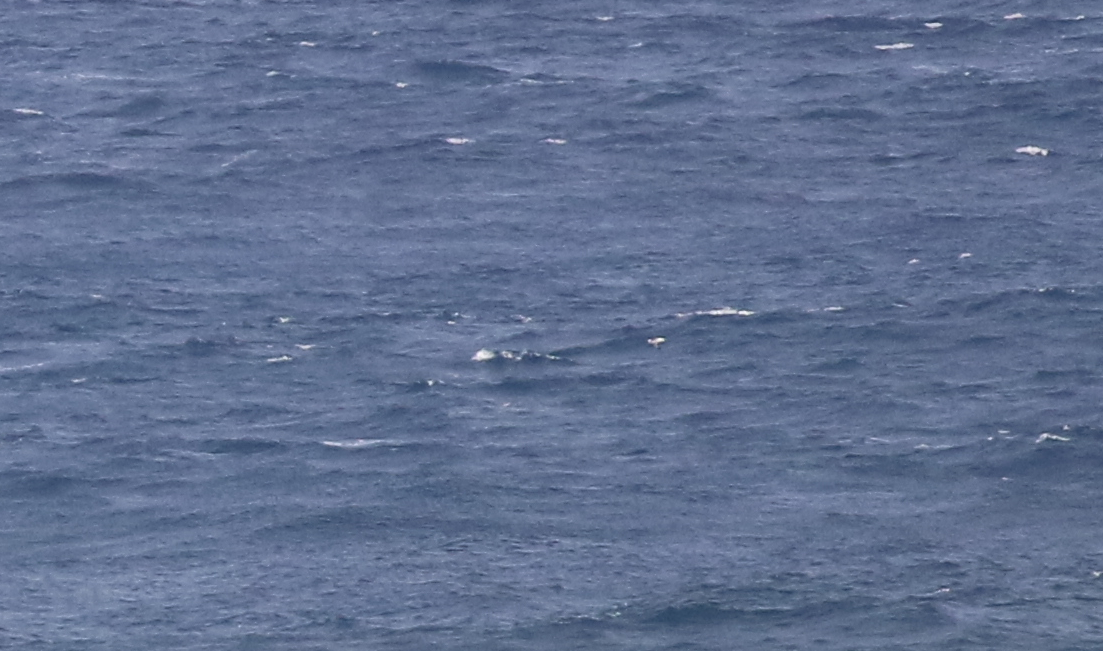 The Yellow-nosed Albatross passing Estaca de Bares on 30 August 2020. While these images leave a lot to be desired, the distinctive gait of an albatross can be made out in the first image, with the second showing the extensively white underwing (Guillermo Rodríguez).

In total, about 15 people connected with both the albatross and the petrel.

South Polar Skua: two different birds were seen on Saturday; a classic dark adult with no signs of moult in the wing, and a first-cycle with new inner primaries, as expected for this age class at this time of the year. There have been several South Polar Skuas seen previously at Estaca, including a couple of well-photographed adults, even from a kayak. This species is surely overlooked in the area, especially in September and October when "Great" Skuas fly past at long range.
Fea's-type Petrel: two different birds were seen well on the Saturday. Both looked like Fea's/Desertas rather than Zino's in terms of structure, size and an all-dark underwing. One of them was videoed. Interestingly, both birds were not doing high arcs, and wingflapped more than usual.
Barolo Shearwater: one was seen on the Friday, with another seen the previous week. This species, like everywhere else across its range, has become much rarer here in recent years.
Sabine's Gull: 125 birds, all adults, were seen on Saturday, mostly in small flocks mixed with terns.
Long-tailed Skua: 123 birds, mostly adults, were seen on Saturday. Our previous highest count is 511 on 5 September 2011, a year where over 2,000 birds were recorded.

Thanks to Bob Flood for his punctual help with information on Trindade and Great-winged Petrels.