Like many fledgling birders in the 1970s, I used to thumb through Heinzel, Fitter and Parslow’s Field Guide to the Birds of Europe, North Africa and the Middle East, musing over some of the rarest and most far-flung birds imaginable. Could Siberian Rubythroat really occur on the edge of Europe? How would I identify an Oriental Cuckoo if I saw one? And what about Black Lark – can a lark really look that good?

Such regional rarities retain an aura of mystique to this day, despite occasional appearances farther west as vagrants. Even if you are one of the lucky few to have connected with them on their wayward migratory travels, there’s no substitute for visiting the breeding grounds, seeing them in full plumage and hearing them sing. And as well as these high-profile headliners, what else might be lurking out there on the eastern edge of the region, where birders rarely venture, and where the habitats and bird distributions are still poorly known? 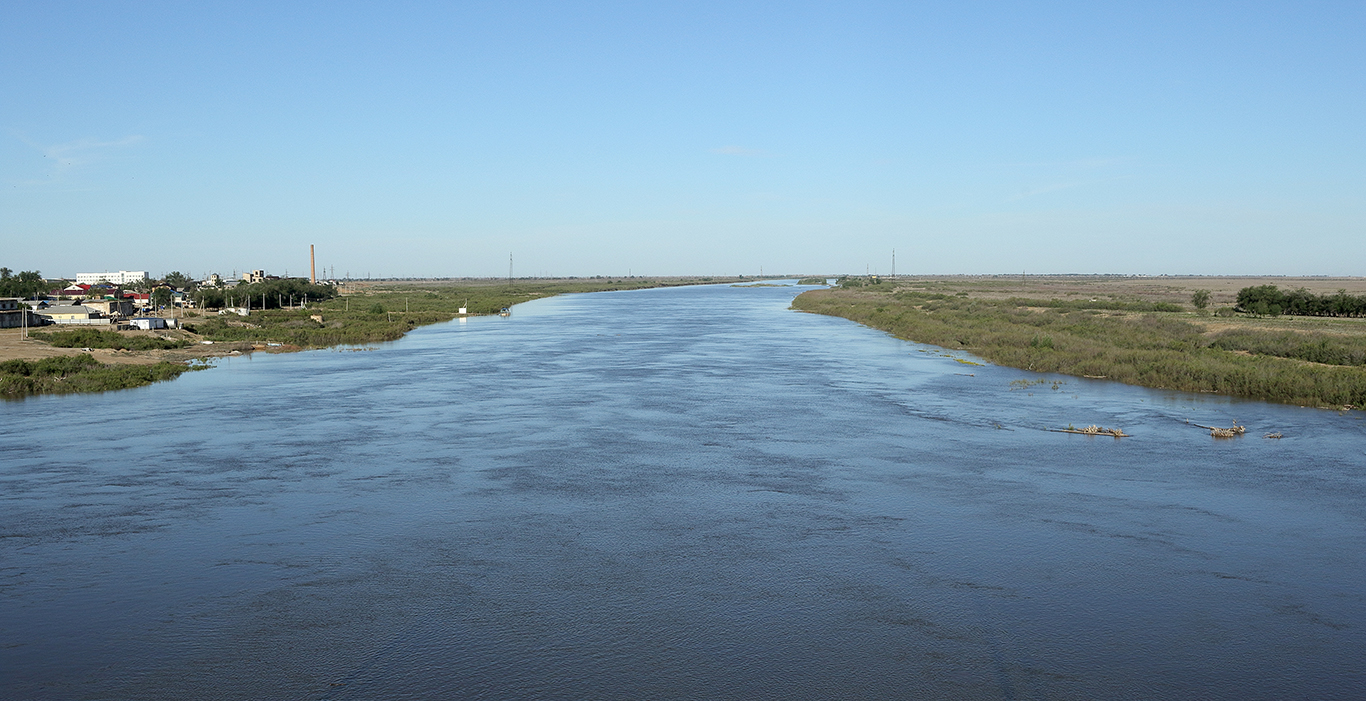 In north-west Kazakhstan, the Ural River, here at Inderbor, marks the boundary between the Eastern Palearctic (left bank) and Western Palearctic (right bank) (all photos by Dominic Mitchell / www.birdingetc.com).

Fast forward 40 years, and as I look out of the window of our jeep a warm glow illuminates the grasslands around us. It’s early morning in June, and our convoy of four-wheel-drive vehicles is snaking its way along sandy tracks across the steppe. On board is an international cohort of Western Palearctic birders, brought together by Birdfinders for the first-ever organised tour to this remote corner of the region. Our intended destination is a series of lakes far away to the north-west, but progress is slow in this terrain and it’s set to be a long day.

Nonetheless, the birding has already been excellent. Soon after we left the tarmac the larks started – Crested and Calandra initially, and then the much-wanted, spectacular White-winged. Strikingly patterned as they lift off the tracks in song flight, male White-wingeds mix orangey-brown tones on the crown and wing coverts with brown body plumage and contrasting Common Redshank-like white on the wings: a memorable sight – believe me you will not forget your first White-winged Lark. They are followed by Greater and Lesser Short-toed Larks, while there are Isabelline Wheatears everywhere and a majestic Steppe Eagle returns our gaze with a cool glare from its perch. 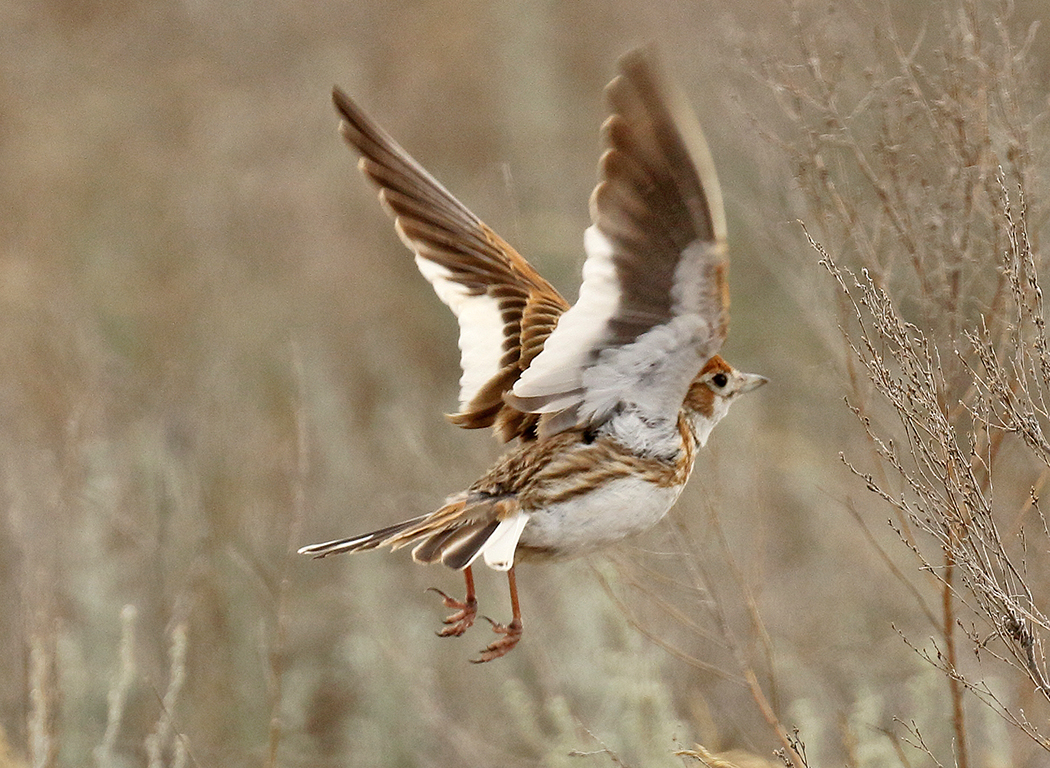 Kazakhstan’s steppes are home to a variety of exciting and desirable bird species that are only known as rare vagrants in western Europe, including White-winged Lark.

Out on the steppes proper, the first thing you notice about the landscape is that, while flat and generally featureless in the distance, up close it is a gently undulating mosaic of grasses, herbaceous plants, wildflowers and weedy seed-heads, untainted by agriculture or pesticides and rich in invertebrates. Subtle changes in the character of this vegetation produce different birds, and as we reach an area of taller grasses our progress is rudely interrupted by an unmistakable form striding through them to the right of the track: Demoiselle Crane! This elegant beauty is one of the prime targets of the trip, and seeing it so well, long before we reach the lakes, is a real boon. 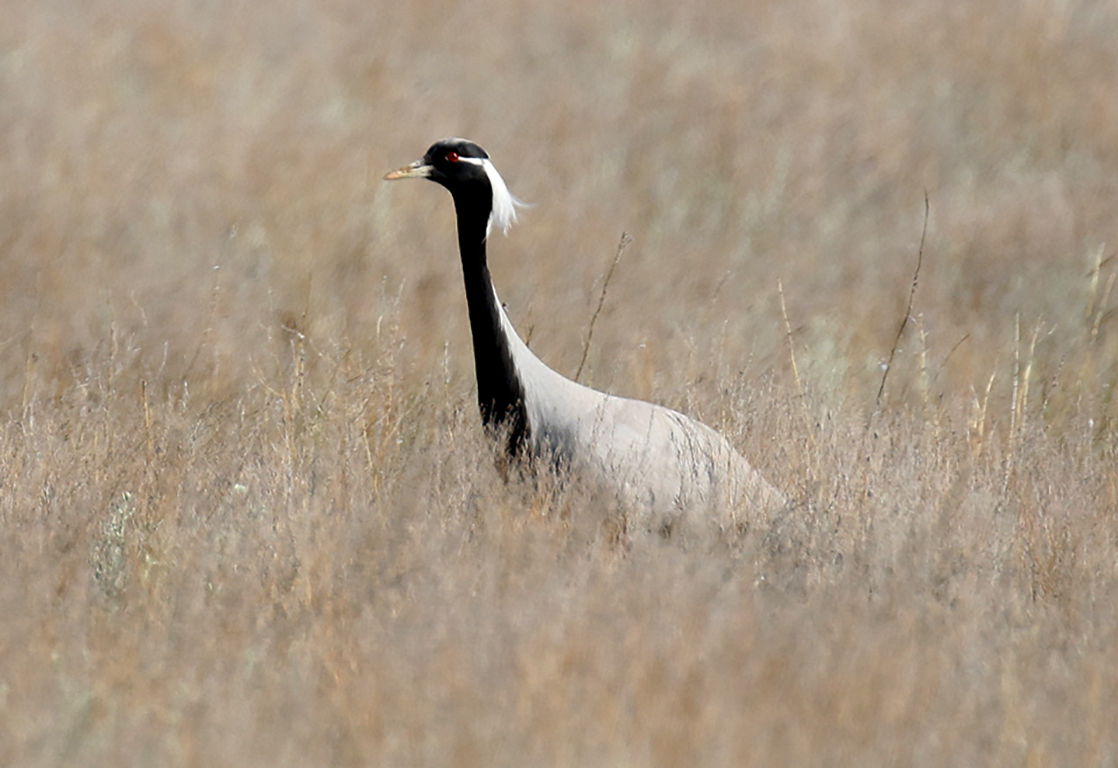 Demoiselle Crane was encountered on three occasions during the trip.

After admiring the crane, we explore this promising area. Almost immediately two Black-bellied Sandgrouse fly over, while all around the air is full of the gravelly vocalisations of Lesser Short-toed Larks. A pair of Steppe Grey Shrikes nesting on a pylon provides further excitement, but a little farther on we really hit pay dirt when an all-dark passerine floats past in almost slow-motion song flight. It can only be a male Black Lark, another key species everyone has been eager to see well. We needn’t have worried – it proves to be the first of many, and over the rest of the morning we are able to fully slake our thirst for this speciality of the steppes. 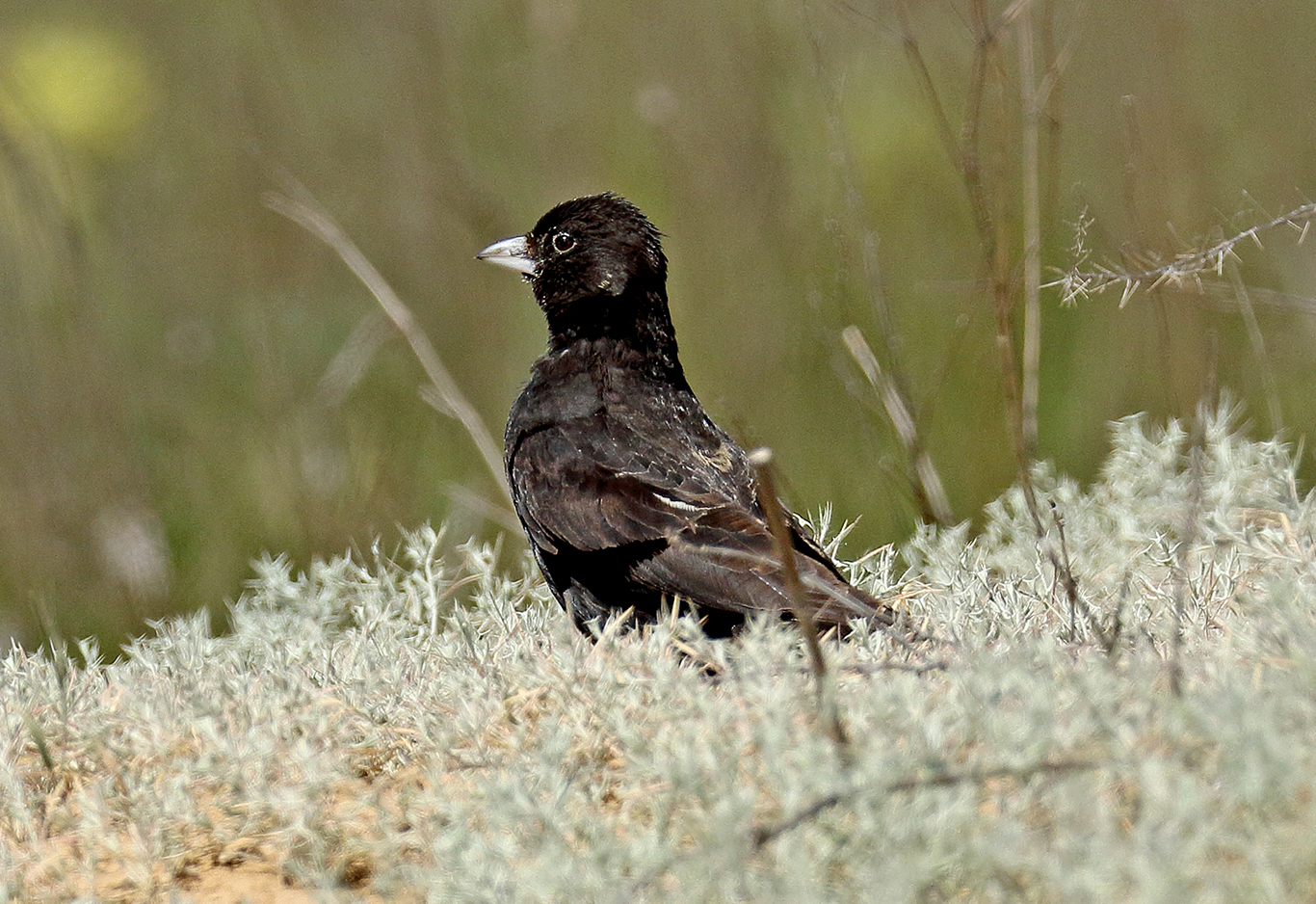 Black Lark is also an extremely rare vagrant to Britain and the rest of Europe.

Having now seen most of the key birds hoped for in this area, we start to retrace our route much earlier than planned and head back, taking in a different chain of lakes en route. Known as Bagyrlay, this area is extremely productive, and we return to it time and again over the next few days. Perhaps the most outstanding species here from a European birder’s perspective is Red-headed Bunting, another member of that suite of eastern specialities attracting major interest in this corner of the Western Palearctic. Although already on our lists from earlier in the trip, this attractive bunting was most numerous at Bagyrlay, with singing males sitting up on low vegetation or perching on overhead wires almost everywhere we looked. 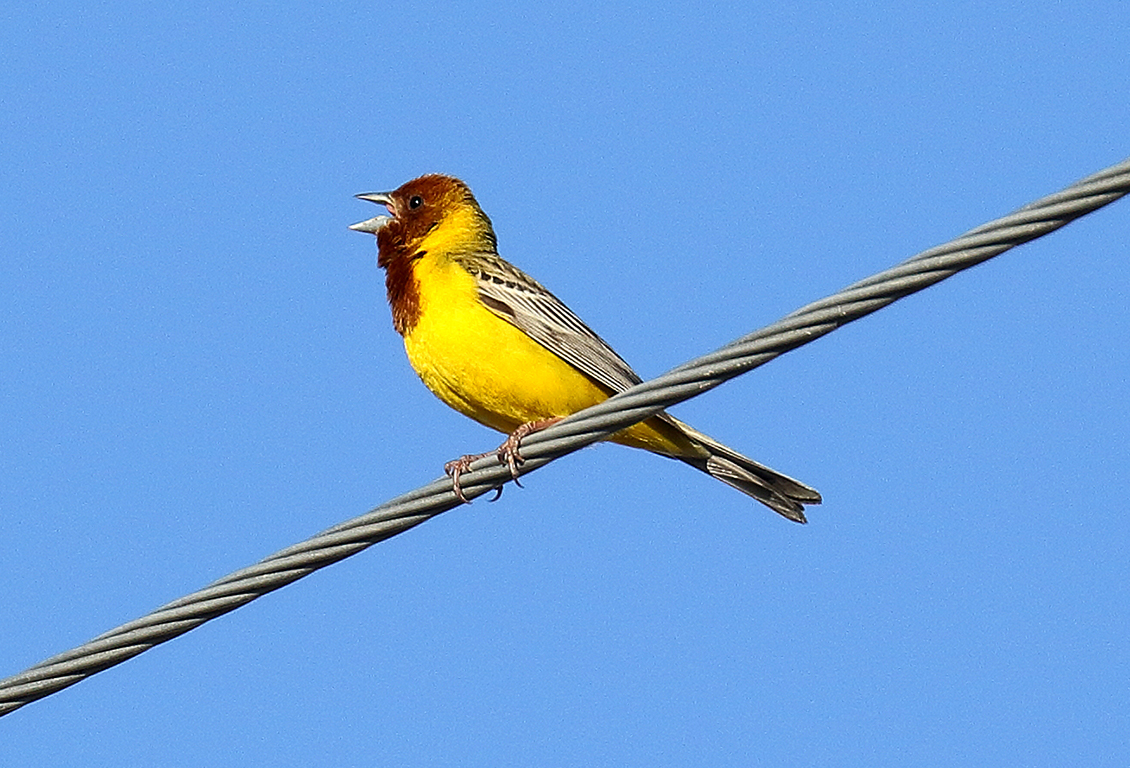 The ranges of several sought-after Asian species stretch west across the river into the edge of Europe, including Red-headed Bunting.

These lakes held other exciting birds in good numbers too, including parties of Dalmatian Pelican, Ruddy Shelduck, Pallid Harrier, Marsh Sandpiper, and Paddyfield and Great Reed Warblers. A constant soundtrack came from the in-flight chattering of Black-winged Pratincoles, omnipresent overhead – occasionally in their hundreds – and clearly breeding in the vicinity.

Our base for exploring the area was an old Soviet-style hotel in Inderbor, just across the Ural River in the Eastern Palearctic. The road through town connects across a bridge over the river with the main north-south highway running parallel to its west bank. This riverine corridor and the access provided to it by the main road is one area future groups would do well to pioneer – so far there has been no proper exploration of the copses, thickets and village fields stretching northwards from here towards the Russian border, and all sorts of interesting finds surely await. Azure Tit, anyone?

In the meantime, our own stops on the long drive to and from Atyrau, the eponymous capital city of this region, proved productive for various open-country species. Stopping to photograph Red-footed Falcons by the roadside on the return journey south, one of the group locked onto a male Little Bustard some distance away in the background – the only one we saw all week. Rosy Starlings and Lesser Grey Shrikes were occasional features of this habitat, as were raptors, and in addition to the Red-foots and fairly ubiquitous Black Kites, we also saw Eastern Imperial Eagle and Long-legged Buzzard. At another stop farther south, in fairly unpromising and disturbed habitat near a canal, the unexpected highlight proved to be a pair of Demoiselle Cranes.

Eventually, the road reaches Atyrau itself. The city straddles the Ural River, and thus the border between the Eastern and Western Palearctic, before its waters – swollen by snow melt from the Ural Mountains far to the north – eventually flow out into the Caspian Sea. Again, we stayed on the eastern side of the city but crossed west of the river to look for birds right on the edges of their range.

In ornithological terms Atyrau is not well known, but it’s already clear there are important discoveries to be made. In 2016 a pair of Long-tailed Shrikes, an Asian species known only as an extreme vagrant this far west, bred in the city’s Victory Park – the first such record for the Western Palearctic, and some 500 miles or so from the nearest breeding areas in southern Kazakhstan. A Pied Bush Chat was found at the same site two years previously, while in June 2017 Swedish birders doing a WP ‘Big Year’ photographed the enigmatic Black-headed Penduline Tit on the west bank of the Ural River here.

The shrikes didn’t return and our trawling of riverside willows produced nattily marked caspius Eurasian Penduline Tits but no Black-headeds. However, mixed groups of Blue-cheeked and European Bee-eaters, singing Sykes's Warblers and Pallas's Gulls patrolling along the river were a very worthwhile return for our efforts. 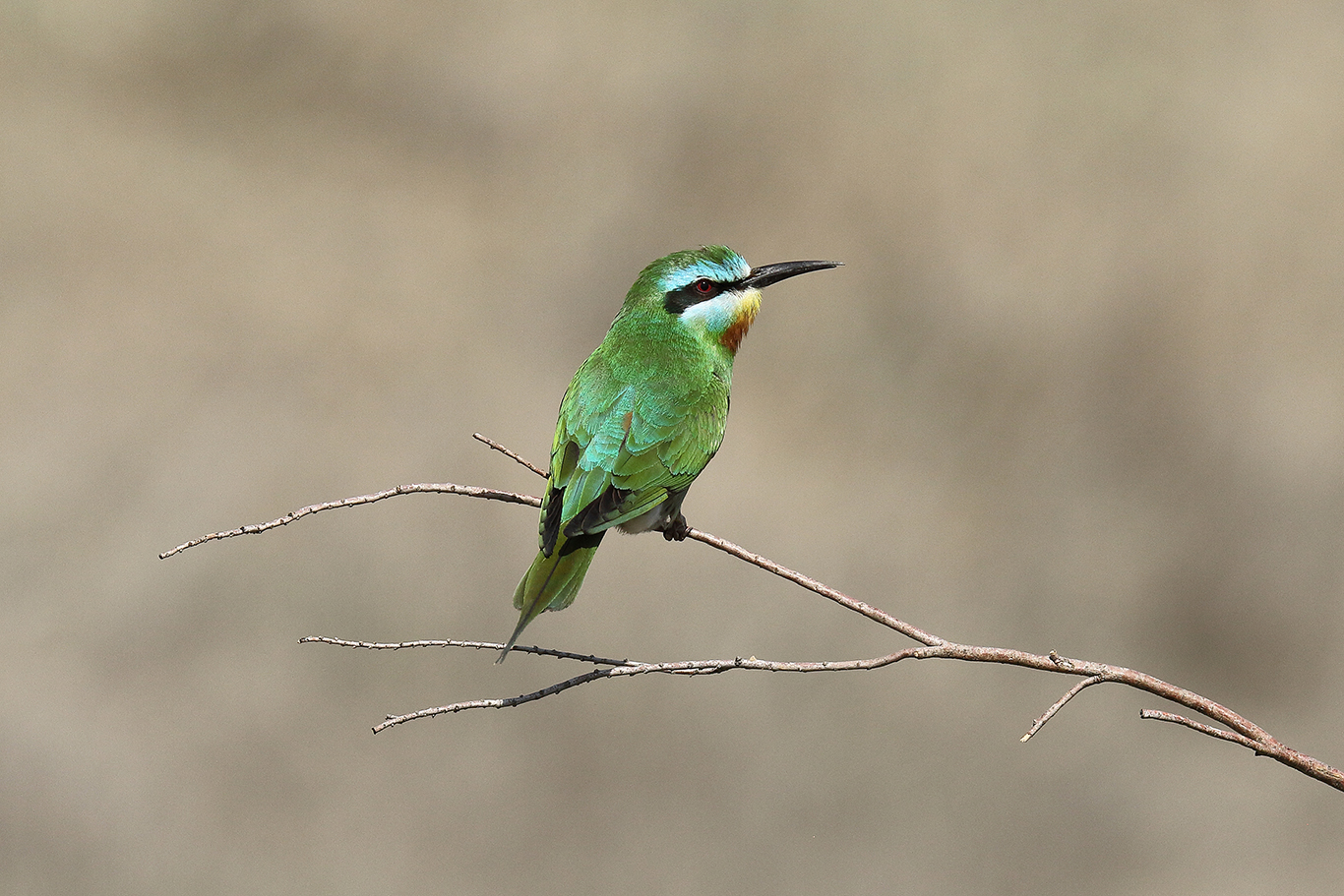 When we first visited Atyrau, a cemetery on the edge of the city proved the unlikely site for the trip’s inaugural Red-headed Bunting, and in another area close to the river we managed to get our first proper views of Sykes’s Warblers. Farther west in the dry steppes north of the Caspian Sea, there were other prizes to be had. With some effort we managed to locate Caspian Plovers here on both of our visits, including a really smart male, while at the end of the tour more time and legwork paid off with Shore Lark – or rather, Steppe Horned Lark, to give this potentially splittable form its likely future name.

The same area of dry steppe was also the third and final site where we encountered Demoiselle Crane, this time a pair with a chick. At least from our experience during a week in June, this species seems the toughest of the main target birds to pin down in north-west Kazakhstan.

Doubtless many more birders will make the journey to Atyrau and its steppe hinterland, especially now that organised bird tours are possible, to seek out the specialities in future. There must be more discoveries in store, too. Could Pallas's Sandgrouse be regular? Does Steppe Gull breed? What other eastern vagrants turn up in spring and autumn? There are plenty of questions yet to be answered, but with more coverage of the area the full potential of this unexplored frontier of the Western Palearctic will become clearer. I know I’ll be back. 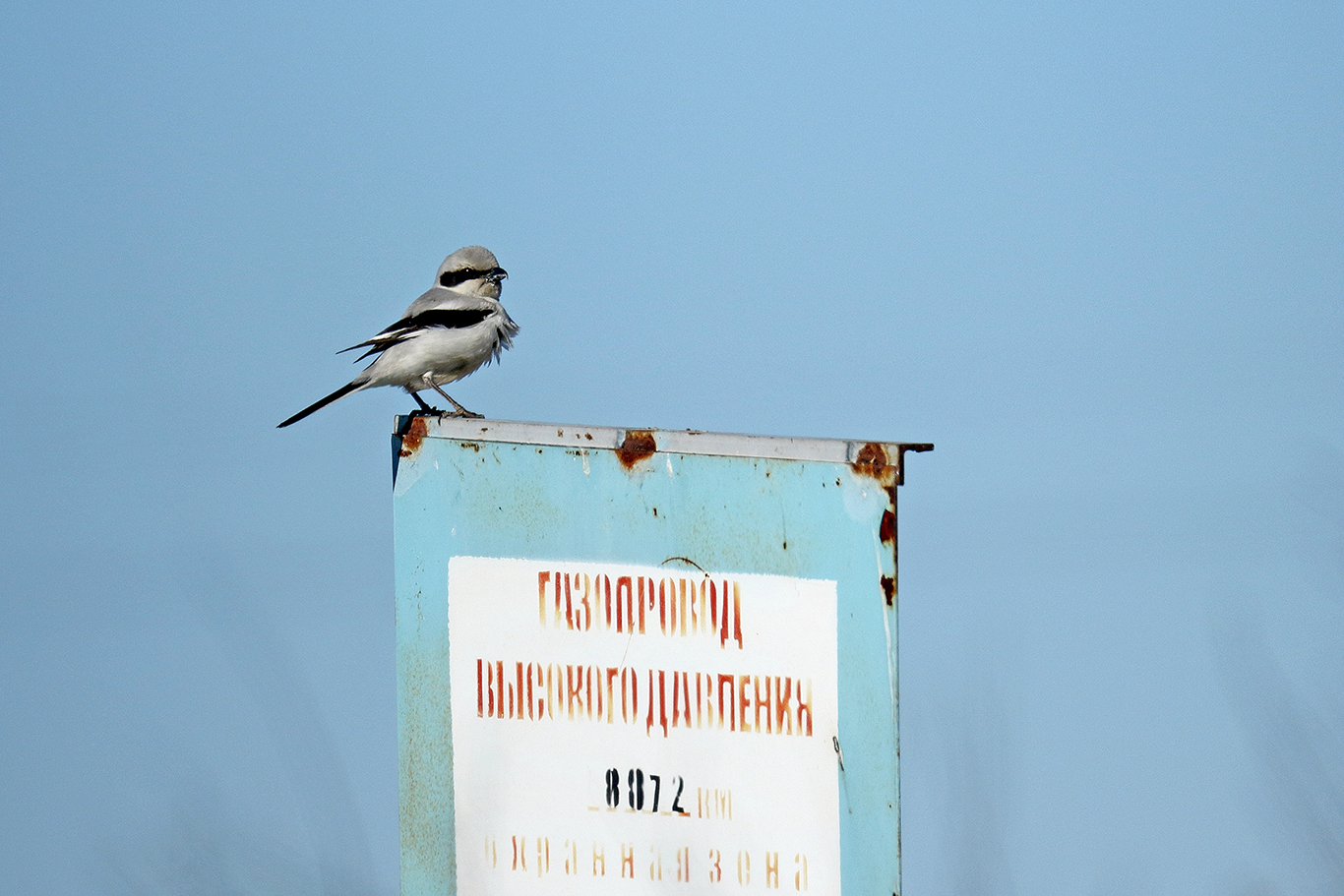 A pair of Steppe Grey Shrikes nesting on a pylon provided some excitement.

Special thanks to Vaughan Ashby and Birdfinders. 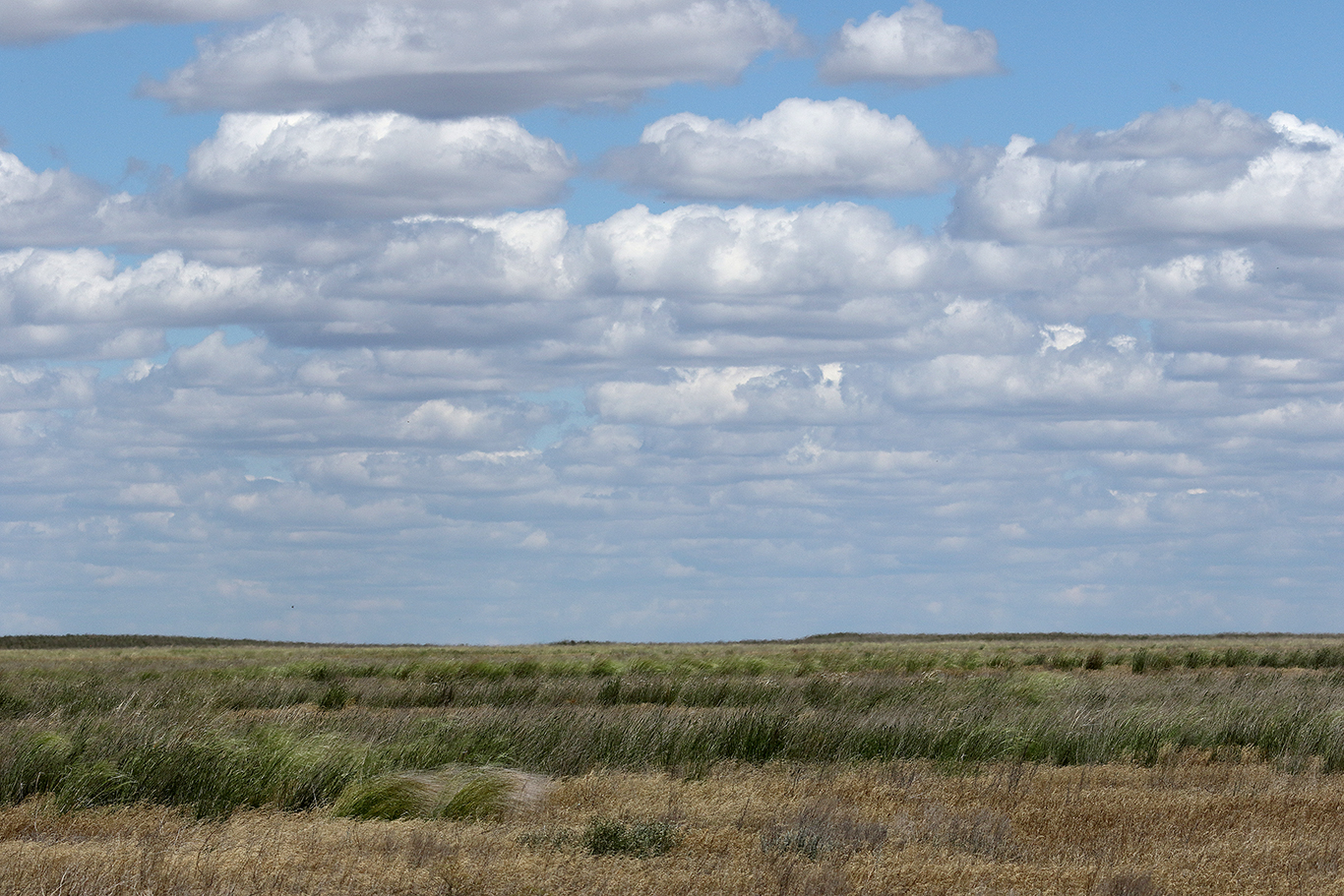