The remarkable ability of ladybirds to fly at great height and speed has been demonstrated by new research1, based on the examination of radar data. The discovery, published in the journal PLOS ONE, showed that ladybirds travel at heights of up to around 1,100m and at speeds of up to 60 km/h (37 mph). This means that, in theory, ladybirds could travel from London to Birmingham in little more than two hours. It may also explain why invasive insects to the British Isles, such as the Harlequin Ladybird, have spread so rapidly across the country. The study also suggests that ladybirds are able to travel further in warmer temperatures, meaning that climatic warming could exacerbate the problems posed by invasive species even further. The paper's abstract can be read below.

Understanding the characteristics and drivers of dispersal is crucial for predicting population dynamics, particularly in range-shifting species. Studying long-distance dispersal in insects is challenging, but recent advances in entomological radar offer unique insights. We analysed 10 years of radar data collected at Rothamsted Research, UK, to investigate characteristics (altitude, speed, seasonal and annual trends) and drivers (aphid abundance, air temperature, wind speed and rainfall) of high-altitude flight of the two most abundant UK ladybird species (native Coccinella septempunctata and invasive Harmonia axyridis). These species cannot be distinguished in the radar data since their reflectivity signals overlap, and they were therefore analysed together. However, their signals do not overlap with other, abundant insects so we are confident they constitute the overwhelming majority of the analysed data. The target species were detected up to ~1100 m above ground level, where displacement speeds of up to ~60 km/h were recorded, however most ladybirds were found between ~150 and 500 m, and had a mean displacement of 30 km/h. Average flight time was estimated, using tethered flight experiments, to be 36.5 minutes, but flights of up to two hours were observed. Ladybirds are therefore potentially able to travel 18 km in a "typical" high-altitude flight, but up to 120km if flying at higher altitudes, indicating a high capacity for long-distance dispersal. There were strong seasonal trends in ladybird abundance, with peaks corresponding to the highest temperatures of mid-summer, and warm air temperature was the key driver of ladybird flight. Climatic warming may therefore increase the potential for long-distance dispersal in these species. Low aphid abundance was a second significant factor, highlighting the important role of aphid population dynamics in ladybird dispersal. This research illustrates the utility of radar for studying high-altitude insect flight and has important implications for predicting long-distance dispersal. 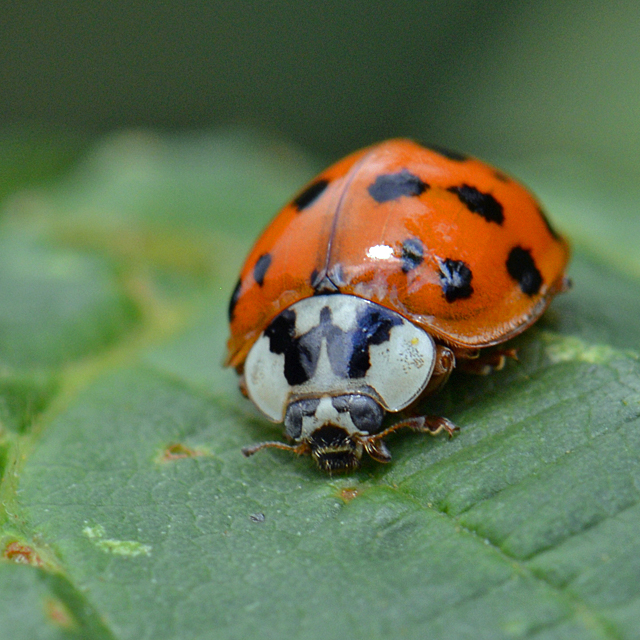 "These are the first recordings of ladybirds travelling at such extraordinarily high altitudes," explained Dr Lori Lawson Handley, from the University of Hull, who led the research. "Ladybirds are very capable flyers on their own, but this puts them up in the stronger winds where they can travel faster and further."

The team worked out what a ladybird would look like to a radar scanner through tests in the laboratory. They then pored back through radar data collected throughout the past ten years above the Rothamsted research centre in Hertfordshire. Handley explained: "If you imagine a ladybird's shape, it's actually quite characteristic. They're more spherical compared to other insects, so between their weight, width and height, we can be pretty confident that we're identifying ladybirds in the radar data."

Most of the ladybirds were found at heights between 150 and 500 metres (c.500–1640 ft) above the ground, flying at an average speed of 30 km/h (18 mph). But some were found at even higher altitudes, travelling even faster. In separate experiments, the team recorded the flight times of ladybirds in a Perspex box. The average flight lasted 36.5 minutes, with some going on for as long as 2 hours. This would mean that ladybirds could travel up to 120 kilometres (75 miles) in a single flight. Until now, anything over two metres was classed as long-distance flying. But Lawson Handley cautions that these flight times are yet to be tested in a real-world setting.

Ladybirds are the most important predator of aphids, a common insect pest threatening food crops all over the world. As such, non-native species of ladybird are often introduced onto farmland as a biological control measure. From there, they can quickly spread, often out-competing native species, like the struggling British Two-spot Ladybird, and inflicting damage on local ecosystems. Until now, it has been difficult to understand just how far they are capable of dispersing on their own because they are often accidentally carried by humans.

A recent citizen science project, calling on members of the public to send in photos and locations of ladybird sightings, has helped scientists to build a picture of the spread of the invasive Harlequin. The results suggest that the Harlequins' progress has slowed as they have encountered the obstacles of the Pennine and Cambrian mountain ranges. Lawson Handley believes that temperature may hold the key: "Our study has shown that temperature was even more important for triggering the dispersal of ladybirds than scarcity of their primary food source, so it may be that the colder temperatures above the mountains are proving a difficult barrier to overcome."