Sitting adjacent to Port Talbot Steel Works on the coastline of Swansea Bay, Kenfig National Nature Reserve offers a little breath of fresh air from the sprawling industry just a couple of miles away. This large site encompasses woodland, an extensive sand-dune system, a sandy beach and coastal rocks reaching down to Sker Point at the far south-western end. It's also the home of Glamorgan's largest lake – Kenfig Pool – where a number of rare and unusual birds have appeared in the past. 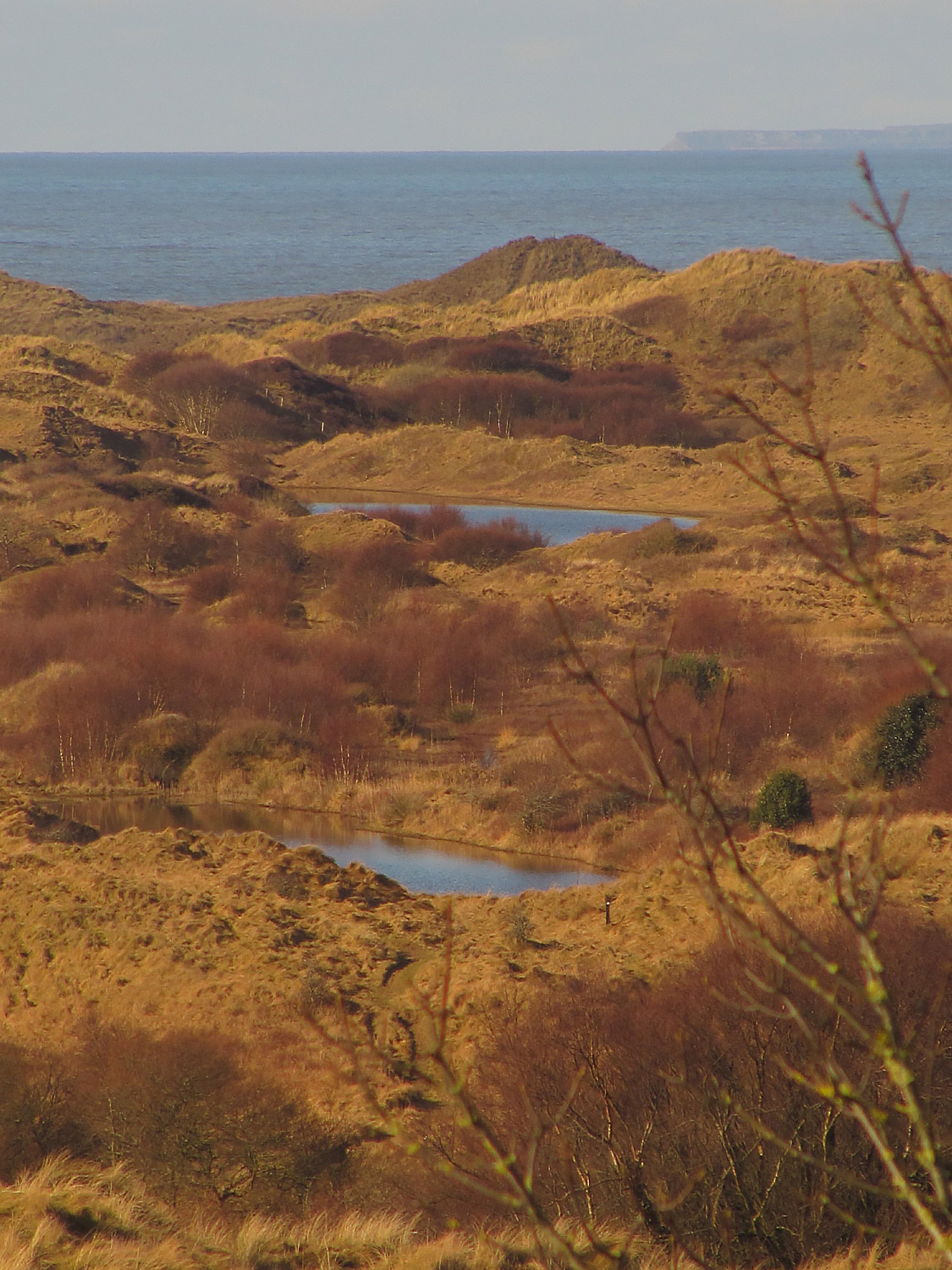 Kenfig NNR offers a unique range of habitats, with seasonal pools forming among the extensive dune system as shown in this image. Beyond lies Swansea Bay and Mumbles Head (www.garethjonesart.co.uk).

The reserve is perhaps best known for its outstanding dunes and is home to number of orchid species, the highlight being the dune form of Fen Orchid – previously found at eight Welsh sites, Kenfig is now its last bastion. Alongside these, the dunes are also home to the rare neerlandica variation of Broad-leaved Helleborine. Originally from the Atlantic region of Europe and primarily found in Denmark, Germany, Belgium and Holland, this is the only site within the UK that you can locate this tall plant. At the right time of year, the dunes can also be carpeted in Southern Marsh and Early Marsh Orchids or, slightly later in the season, thousands of Marsh Helleborines. 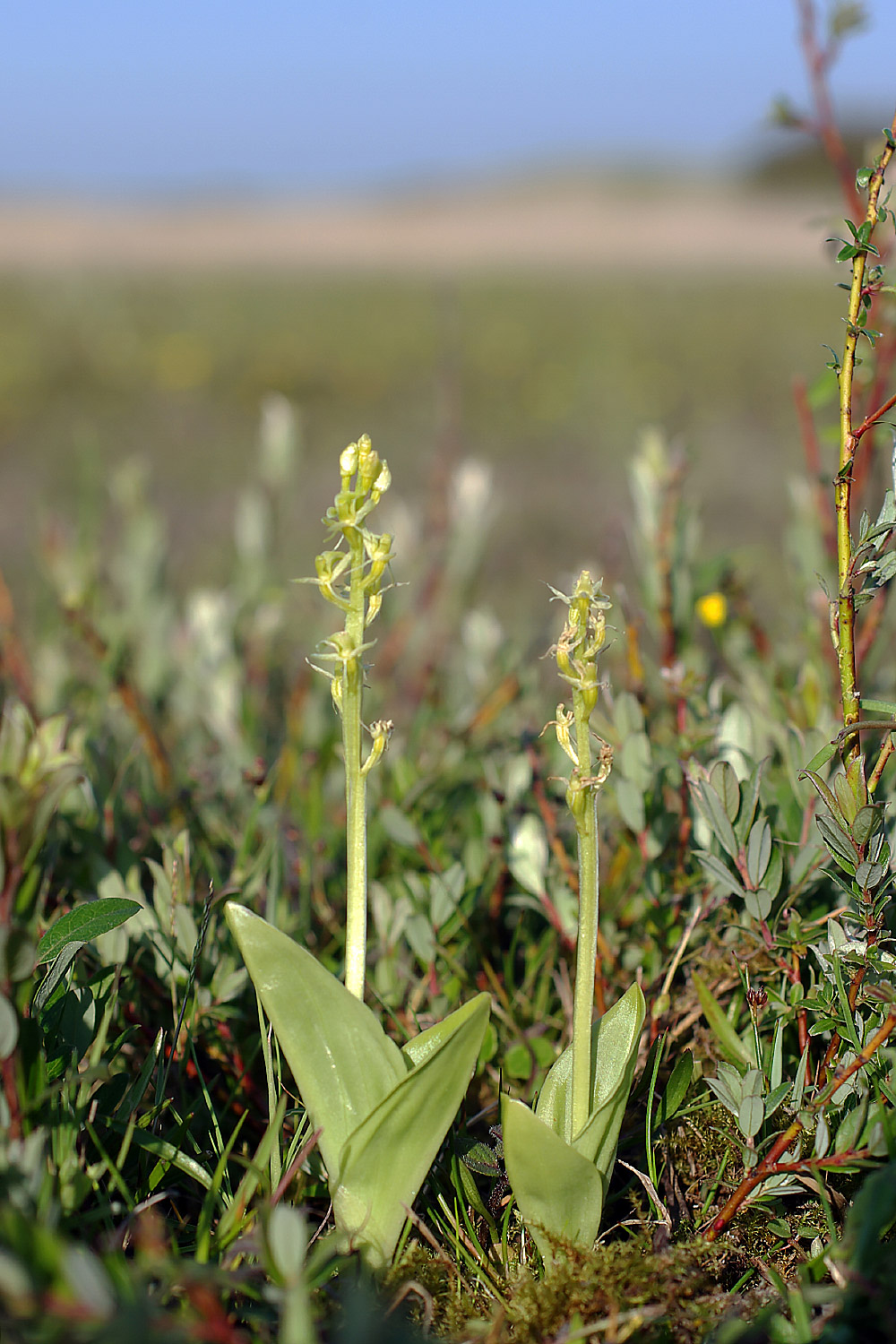 Kenfig is now the only site in Britain where the dune form of Fen Orchid can be found (Simon Close).

But it's far from just plants that this site special. Among the commoner Odonata found on site, summer 2018 produced a Lesser Emperor dragonfly, which was seen by a number of wildlife enthusiasts as it basked in the sun for several days. A total of 24 species have been recorded on site, with at least 17 of these breeding.

Among the numerous records of Garganey, Greater Scaup and Slavonian Grebes from 2018, one occurrence that stands out is the Spotted Crake that sang in the dunes south-west of South Hide for two days at the beginning of June. Records from 2017 follow a similar theme of grebes and wildfowl, although several additional exciting birds graced the reserve. For nine days from 13 May a Purple Heron showed extremely well, feeding in the reedbeds and roosting with Grey Herons in the trees surrounding Kenfig Pool. This record is particularly interesting as other individuals of this species were also seen in the summers of 2011, 2013 and 2015. The year went from great to outstanding with a touring third-calendar-year Caspian Tern arriving to feed over Kenfig Pool early morning on 25 June and again a month later. This was the same bird that travelled extensively around Britain that summer, being located first in Carmarthenshire but also being seen in the likes of Norfolk, Lincolnshire and Derbyshire. An autumn Lesser Yellowlegs on East Pool rounded off a fine year. 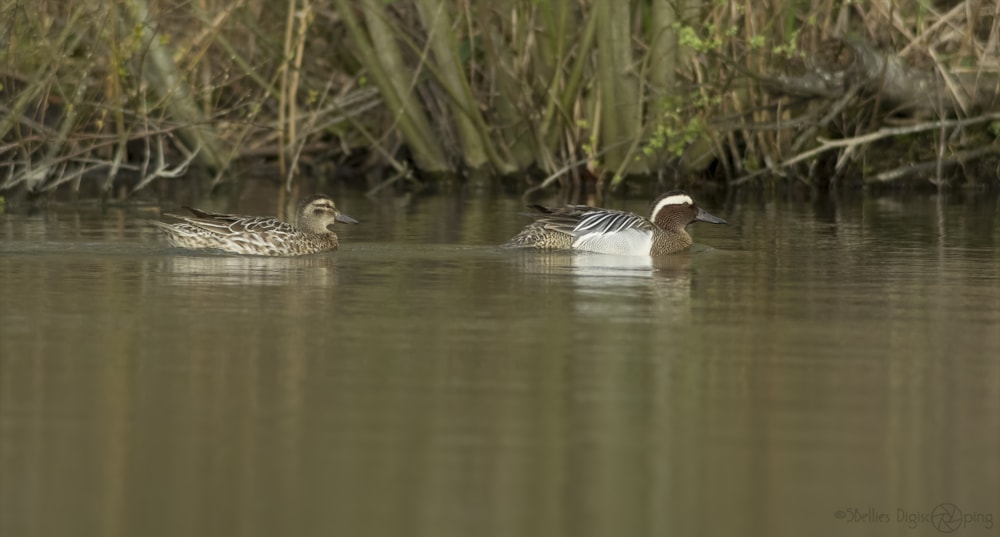 Garganey is a regular visitor to Kenfig Pool (Gary Loader).

Local birder Neil Donaghy's initials sit alongside many rare and unusual birds – especially in South Wales bird reports! He has found many a good bird at Kenfig and is an inspiration to always push yourself when birding. He is living proof that knowing your patch (and visiting it frequently) gives you the best chance of finding the birds you have always hoped to. Speaking to him about his discoveries and what Kenfig means to the birding community, Neil explained the origins of his affiliation with the reserve:

"I first visited Kenfig NNR in 1971 and there was something about it that told me I knew that I wanted to spend more time there, though that was not to come until much later. In fact, it was the early 1990s when I first began to visit on a regular basis, having spent many years living and working outside of Glamorgan. You could still see coveys of Grey Partridges in the dunes then, but it was my fascination with Aquatic Warblers that really drew me to the site, especially in August and it remains one of my favourite months to be birding there. 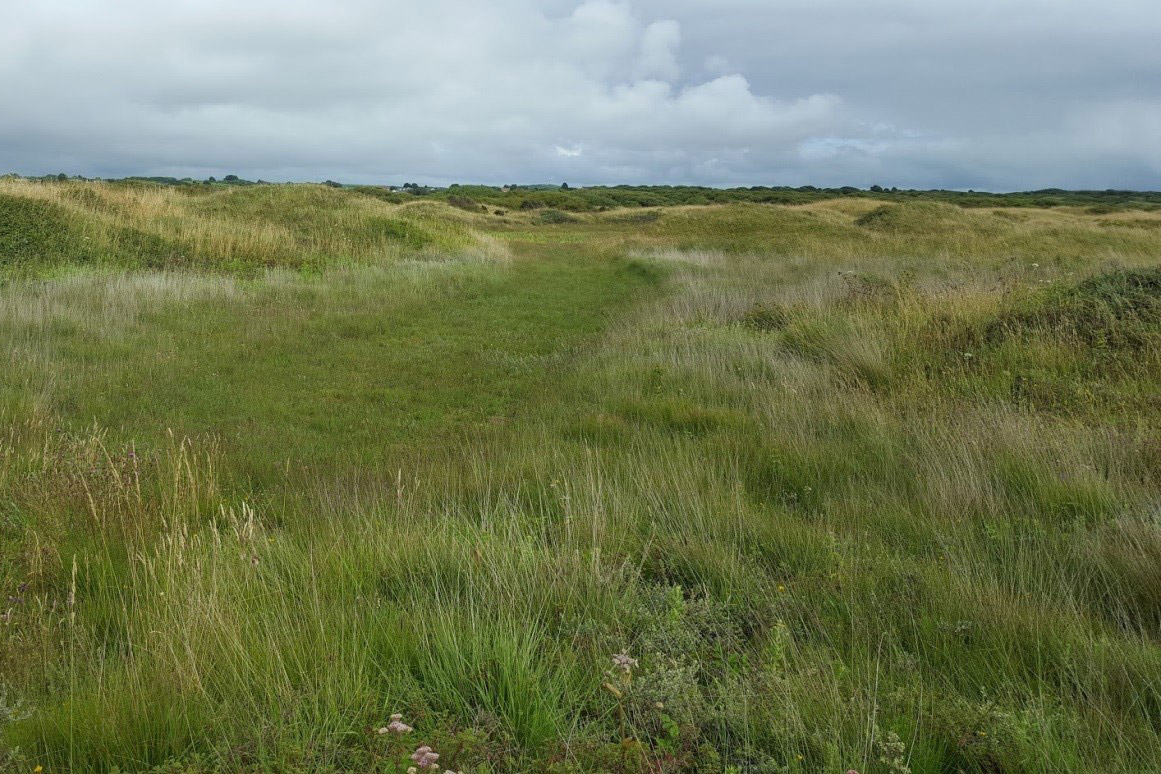 "I have to thank S J Moon for his encouragement and help as my ringing trainer and mentor respectively; I learned so much about the site and bird migration and that combination still produces the magic that whenever possible forces me out of bed to be on site at dawn to this day. It is my speculative opinion that the almost 40 records of Aquatics that have been found on the reserve were probably from the now extinct Hungarian population, as there have been no site records since that population disappeared. How I would love a Polish-ringed bird to turn up!" 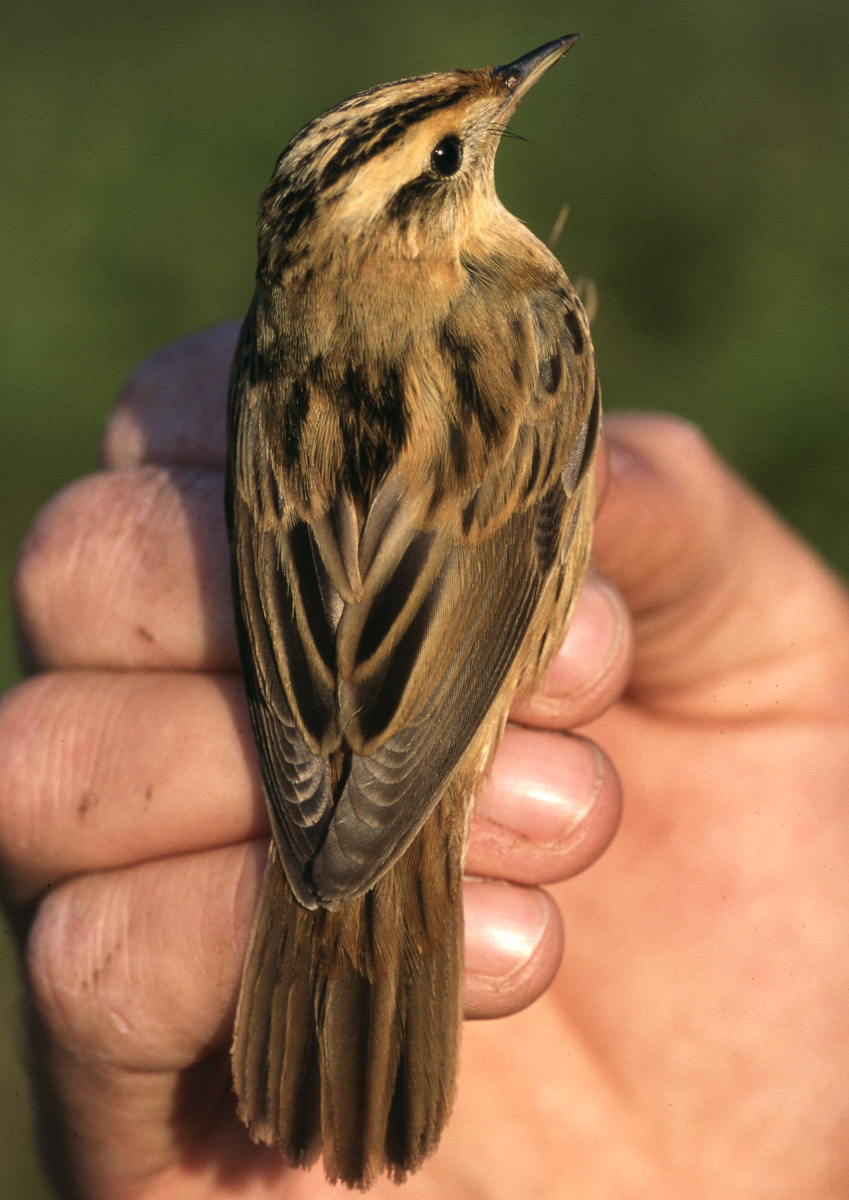 This Aquatic Warbler was trapped and ringed at Kenfig Pool on 10 August 1995, being one of almost 40 recorded at the site. However, it seems that their occurrence here has become a thing of the past, with the species not seen since 2004 (Peter Howlett).

Diving deeper into Kenfig's past records and there's a notable theme to the scarce and rare site visitors – the majority are terns, wildfowl or waders. We can see this with the Baird's and White-rumped Sandpipers, Temminck's Stint, Red-necked Phalarope, Black-winged Stilt and Kentish Plover all visiting either the pool or Sker Point. In terms of terns, the site has also had American Royal, Gull-billed and Whiskered Terns in addition to the aforementioned Caspian Terns, with the majority of these being short-staying birds typically using the pool for feeding on their brief visits.

The Royal Tern, a ringed first-winter, was seen on Kenfig Pool on 24 November 1979 by S J Moon and was originally 'banded' as a nestling in North Carolina, USA. It represents the first British record after four previous claims were deemed 'not proven'. This isn't the only time that Kenfig has played host to a first for Britain, as in 1982 Sker Point held a Little Curlew from 30 August-6 September. This Far Eastern shorebird generated a huge twitch over its eight-day stay.

A long list of quality wildfowl have been made from the site, the most notable of which is a contentious Redhead on site for four consecutive winters from 2001/2. Although initially accepted by the Rarities Committee, this bird was subsequently deemed 'Not Proven' after a review in 2010, with concerns surrounding anomalous features such as the bird's head shape. Other records include Green-winged Teal, Ring-necked Duck, Lesser Scaup and Ruddy Shelduck. The site is increasingly reliable for Great and Western Cattle Egrets and is one of the most popular places to see Short-eared Owls during the winter months, with them frequently flying over the dune systems on calm afternoons. 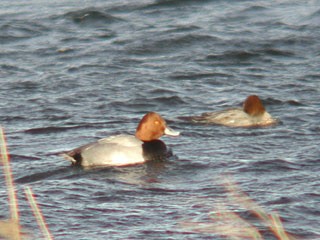 Neil Donaghy continued: "I have been very fortunate to find many good birds over the years, including the only twitchable Aquatic that didn't come out of a mistnet. Some birds have brought more satisfaction than others and if I am able to indulge a few here in no particular order, they would rank highly among my personal highlights. Pride of place has to go to the three Eurasian Penduline Tits in November 1996; my first real rarity, a county first and all the more satisfying that so many people saw them. However, few people would know that I had to run all the way from the north pool hide to the reserve centre with badly damaged ankle ligaments following a recent accident to get the news out – few birders had mobiles back then and social media didn't exist!

"The trio of recent transatlantic shorebirds – Baird's and White-rumped Sandpipers and Lesser Yellowlegs – were all very special finds and represented new additions to the site list, as well as major county birds for the big listers. Surprisingly, the Baird's and yellowlegs both turned up in south-easterly winds, which goes to show how anything can happen here. After all the years of trying, I finally managed to see a Ring Ouzel on the reserve in 2018 as one flew in off the sea at the river mouth and landed briefly, before going on its way again. I always get a thrill from Yellow-browed Warblers and Little Terns too, having seen many over the years. I have been fortunate to see two Caspian Terns on the site, several Purple Herons, a Pomarine Skua riding on the back of a dead deer on Christmas Eve and a flock of six Hawfinches during the recent mini invasion to the UK; another first for the reserve." 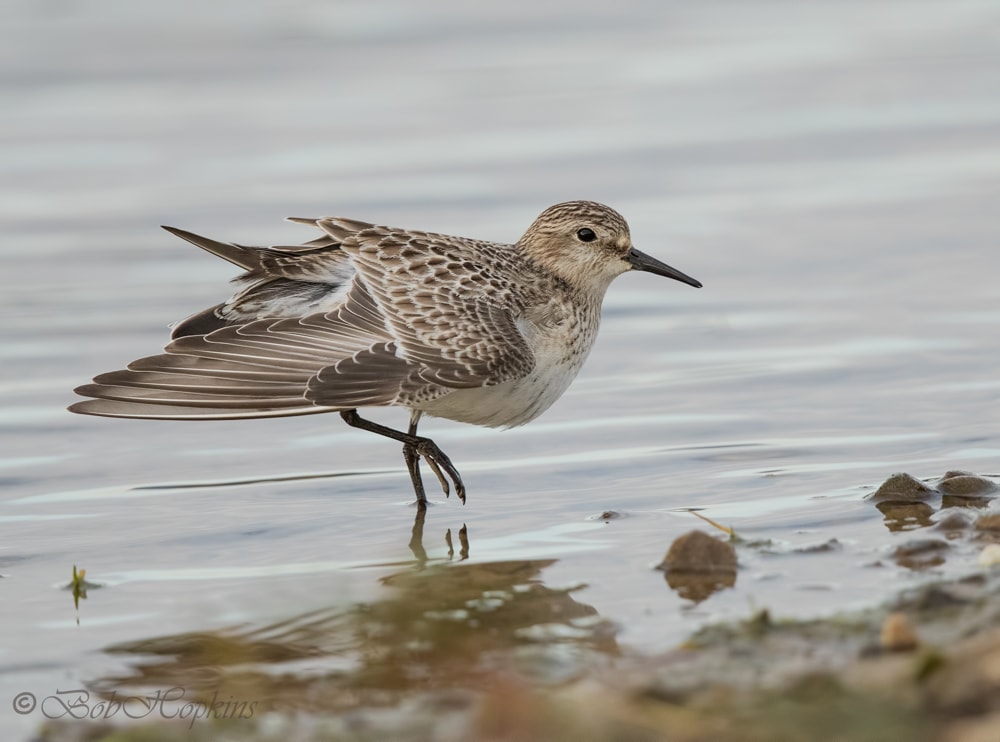 Donaghy concluded: "I am very fortunate to be able to call Kenfig my patch, but it is so much more than that; more like a spiritual home that helps me connect with nature in a way that few other places can. The site faces an uncertain future when the lease runs out at the end of this year; for the sake of the staff and nature conservation in South Wales it is vital that this jewel is preserved for generations to come."

Kenfig is a reserve that many South Wales birders visit as it's a place where you can see a vast array of wildlife while also stand a good chance of finding something unusual. While large numbers of nature enthusiasts visit the site for its native wildlife and migrants, that doesn't quite mean that the site's future is safeguarded. In 2018, Bridgend County Borough Council announced that it was seeking new management for the site as its lease is up in December 2019. Natural Resources Wales is working with potential owners to ensure the wildlife is safeguarded, but Bridgend Council has said it is expiring the lease to make way for a more specialised organisation, such as WWT or RSPB, to take over management of the site and enhance it to its full potential. This takeover remains unfulfilled and without new management in place, what does that mean for the site as we know it? These are uncertain times for one of Britain's most unique and treasured reserves. 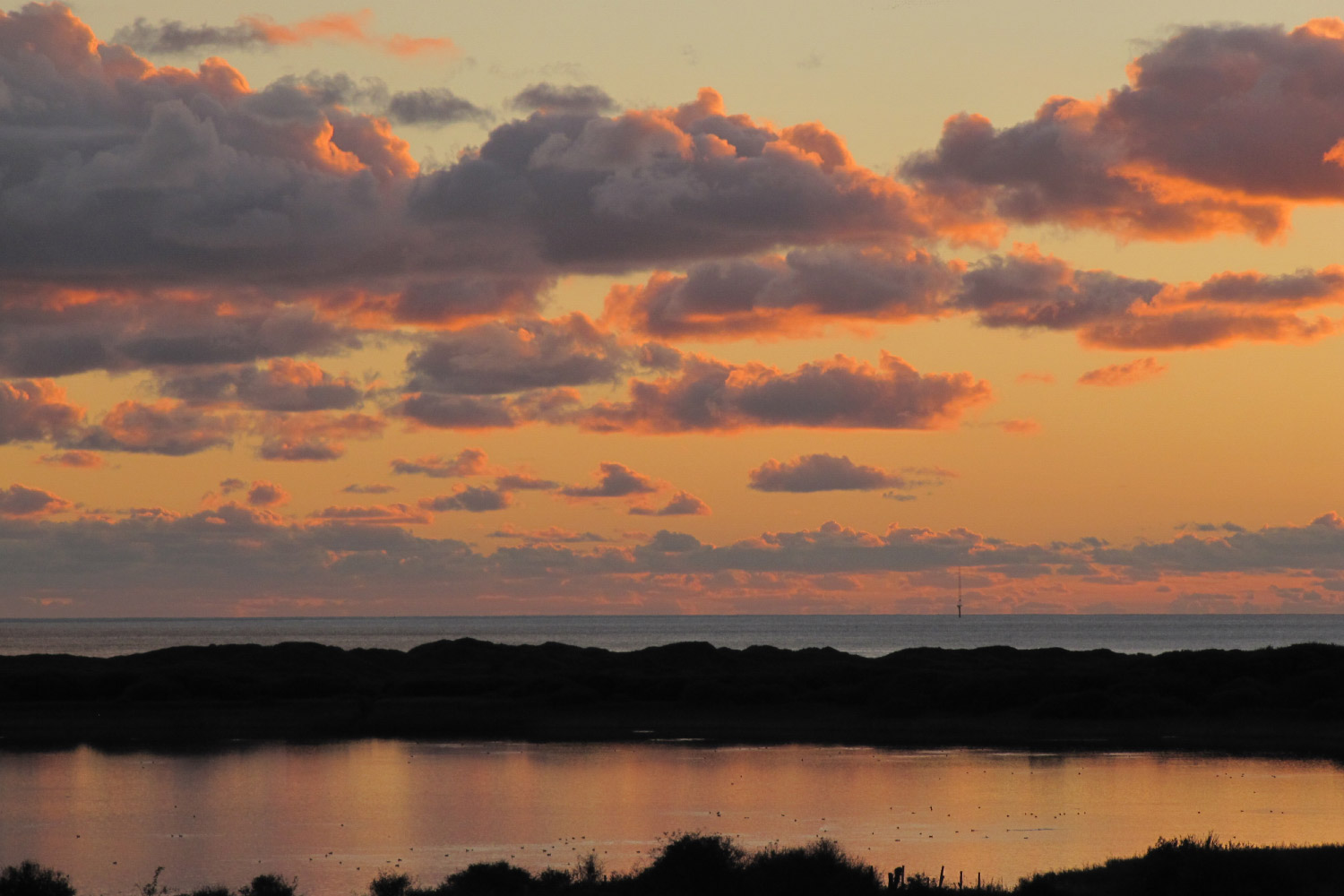