Exceptional Displacement of Little Auks into the North Sea 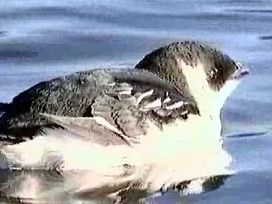 The Little Auk’s breeding range is almost entirely restricted to the high Arctic, with birds wintering exclusively amongst the cold currents of the broken pack-ice from the Barents Sea westwards to Newfoundland. It is often quoted as being the most abundant seabird of the North Atlantic, with, for example, 10-15 million pairs estimated on Spitzbergen alone.

Despite its apparent abundance it is always an eagerly sought-after seabird by birders, as in some winters very few are recorded. The few that are during these lean times represent the cumulative product of many hundreds of hours staring out at desolate wintry seas by diehard seawatchers during harsh onshore blows. However, the would-be observer often needs to be quick off the mark to encounter a movement of birds along the east coast as such flights may only last a matter of hours, or perhaps a day or two. A rapid response to the latest weather forecast is a key component for planning a successful day out to encounter this delightful alcid.

Occasionally, exceptionally large displacements of Little Auks occur in the North Sea, when birds are blown away from their usual wintering grounds in the north Atlantic. These movements are often termed ‘wrecks’, but I tend to think of Little Auks being either ‘wrecked’ or ‘displaced’. The former results in large numbers of dead or moribund birds on the coast with many sick individuals succumbing to exhaustion or the attention of the local large gulls. Often associated with such ‘wrecks’ are numbers of birds recorded at incongruous inland locations, sheltering in suburban gardens and the like. Alternatively, ‘displacements’ tend to involve largely healthy birds purposefully re-orientating themselves northwards following a movement into the North Sea. One theory postulated for the sporadic occurrence of large numbers into the North Sea is that severe weather and gales in the wintering areas cause their favoured food (zooplankton) to drop to a depth beyond which the Little Auk is capable of diving, resulting in starvation and vulnerability of wintering birds to gales. Alternatively the gales might simply be displacing birds that are, due to a combination of factors including food supply, susceptible to the gales which aid their displacement away from their favoured wintering areas. The inhospitability of these wintering areas means that these potential causes are largely hypothetical.

Prime conditions for a major displacement of Little Auks were becoming evident early last week. A regular eye on the weather forecasts documented a trail of strong westerly winds across the North Atlantic early in the week, backing into a strengthening gale force northerly on Thursday through into Friday. Good numbers of birds were noted on the 8th with movements noted from Norfolk and Suffolk northwards along the east coast. Having followed the weather during the week it was clear that events were going to be interesting along the east coast. With Little Auks in mind and my expectations high, I settled into a ‘warm’ (!!) and ‘sheltered’ seawatching position on the cliffs at my own local patch on the North Yorkshire coast at dawn on the 9th. The sight below me was the epitome of a winter storm and from a first scan with binoculars it was clear that a major movement of Little Auks re-orientating northwards was taking place. Flocks of twinkling ‘Dovekies’ moved through directly below me as they dodged the relentless pounding surf and mountainous waves, with many flocks pitching down in the surf briefly before continuing their journey. Many were associated with flocks of Dunlin, whilst others went through singly or in small parties, with the maximum flocks comprising up to 70 birds. The density of the passage was far too great to count by myself and many hundreds if not thousands must have passed undetected as I struggled to keep pace with the movement between sleet showers and a bitingly cold northerly wind.

I was not alone in witnessing such a fantastic spectacle. Huge numbers were detected passing a number of sites between East Yorkshire and Northumberland: over 8,000 passed the Farne Islands, over 5,000 passed Flamborough Head, 2,800 passed Newbiggin in 2 hours and 1,700 passed Whitby in 5 hours. These must represent only a relatively small proportion of the true numbers that had made their windswept exit out of the North Sea. These tallies came close to the record count of this diminutive seabird in British waters, that of 10,947 past Flamborough Head on 11th January 1995, with 9,522 past there on the 12th.

In the last two decades there have been a number of major movements of Little Auks, and there have been at least six large-scale movements noted: February 1983 and October 1983 (when a ‘new’ British record of 6,244 passed Flamborough Head); November 1990; January 1995; November 1995 and now once again during the past week. Based on a brief analysis of records during the last century, it would appear that there has been a greater propensity for the species to reveal itself in British waters in much greater numbers than has previously been recorded. The reasons and triggering factors for this are largely unclear. In Yorkshire for example, prior to the 1980s there were only three documented wrecks - in 1894/95, February 1900 and November 1948! Elsewhere, a wreck in the southwest in February 1950 was unusual in terms of location, as the species tends to shun the warm water currents to the west and southwest of our landmass.

Whatever the reasons for these occurences, the opportunity to observe these delightful birds has never been greater and with further northerlies on the 13th, numbers have again been into three figures at several sites along the east coast, allowing the dedicated the opportunity to witness a special movement of an enigmatic seabird.