If you locate a small, streaky yellow and green finch while out in the field, the likelihood in Britain and Ireland is that it's the delightful Eurasian Siskin, which is present in good numbers throughout the year. However, particularly in spring, the much scarcer European Serin is a possibility, while there's even a chance of the mega-rare Citril Finch, both of which are confusion species. Andy Stoddart provides the information you need to distinguish all three taxa should you find one. 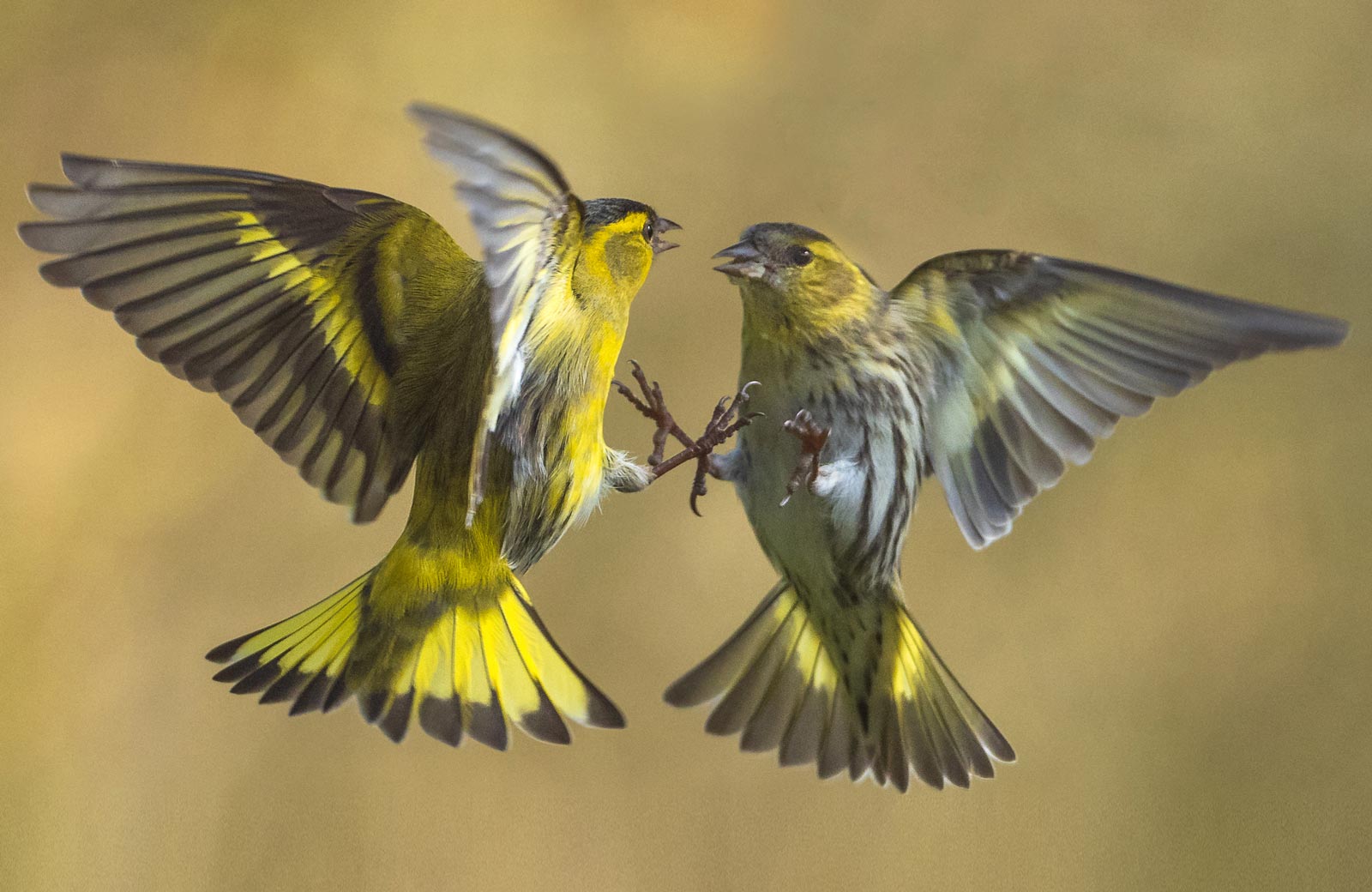 Eurasian Siskin (Lydbury North, Shropshire, 20 March 2020). Siskins might be common but they are still very beautiful. This pair is showing to perfection the splashes of bright yellow in the face, underparts, wing-bars, lower rump and tail sides (Andrew Fusek Peters).

Europe is home to four small yellow and green finches. In Britain the default option is Eurasian Siskin, but in central and southern Europe it needs to be distinguished from the rather common European Serin and, in the Alps and Pyrenees, from Citril Finch. The fourth, Corsican Finch, is restricted to Corsica and the Italian islands of Sardinia, Elba, Capraia and Gorgona, so isn't treated here.

This is a widespread species which breeds across the Palearctic from Ireland in the west to Kamchatka in the east. There is, however, a gap in its distribution in southern Siberia.

In some parts of its range it is resident, but more northerly populations can make long-distance movements and winter well to the south, as far as North Africa in the west and southern China in the east. These movements can have an unpredictable irruptive quality, influenced by food availability, and it can then occur in places where it is not usually found.

It breeds throughout Britain, favouring coniferous woodland, but also feeding acrobatically in birches and alders. It has readily adapted to visiting feeders, especially taking a liking to peanuts, and has become one of Britain's more familiar garden birds.

It can be found in Britain year round, but it experiences large fluctuations in population size so that it can suddenly appear or disappear from a particular area. Periodic large autumn arrivals in Britain originate from northern and eastern Europe. In winter it typically forms tight, jumpy and highly mobile flocks which can also attract redpolls and Goldfinches.

This is a very small finch, similar to Lesser Redpoll, and therefore much smaller than Greenfinch. It is small headed and rather long billed, with a short, very deeply notched tail.

Close up it is highly attractive. Males have a blackish crown, forehead, fore-supercilium and chin, subdued by greyish feather tips in autumn. The rear supercilium, neck-sides, breast and rump are yellow and the ear coverts and mantle are green, the latter streaked dark. The flanks are whitish and heavily streaked, there is a prominent, well-defined yellow double wing-bar and in flight the tail-sides are prominently yellow.

Females have much less yellow in the plumage and are more heavily streaked. Juveniles are much paler and browner, almost entirely lacking visible green or yellow, and have narrow wing-bars.

The species is typically picked up on call – a high-pitched, usually descending pi-ooo. Flocks utter a harsh, slightly redpoll-like chatter. The song, delivered either from a treetop or in song-flight, is a slow-paced and varied series of notes which can include some mimicry.

This is a common central and southern European and North African species, breeding from Portugal in the west to Turkey and Ukraine in the east. It is not a great migrant, but withdraws south a little in winter. It favours conifers and typically frequents parks, gardens and churchyards and is therefore easy to find around towns and villages.

In Britain it is a rare migrant, mainly in spring, but also possible in autumn, and is most frequent in the south. Records at any other time of year are most unusual. In the later years of the 20th century it bred occasionally in southern England and was often touted as a potential colonist, but this promise was never fulfilled.

This is a truly tiny finch, its large head and small bill giving it a rather 'stubby' look. The plumage is superficially like Eurasian Siskin, but the males show a bright yellow forehead, supercilium, neck-sides – which frame greenish ear coverts containing a Common Linnet-like pale area – and breast. The greenish mantle and white flanks are distinctly streaked, the wing-bars are narrow, the yellow rump is very prominent and there is no yellow in the tail-sides.

Females are paler, less yellow and more streaked than males, with duller rumps. Juveniles are wholly brown, lacking any yellow.
The song and call are highly distinctive and a bird is most likely to be picked up by ear. The song, given from a treetop or in slow-motion song-flight, is a rapid sequence of high-pitched squeaky notes, often likened to the song of a Corn Bunting or a jangling bunch of keys. The call is a high-pitched, rather 'silvery' tirilirilit.

This is a highly range-restricted species, confined to the Alps, Pyrenees and the mountain ranges of northern and central Spain. It breeds in high-altitude spruce woods, favouring the treeline where there is access to alpine meadows. Here it can often be found feeding on the ground.

It is largely resident, descending a little in winter. Surprisingly, though, the species is prone to very occasional vagrancy, with the odd north European record now on the books including two in Britain (both males): on Fair Isle, Shetland from 6-11 June 2008 and at Burnham Overy Dunes, Norfolk on 10-11 May 2015.

In size and structure it resembles Eurasian Siskin. Its plumage is similar, too: largely green and yellow with broad – though not well defined – yellow double wing-bars and a greenish-yellow rump. The plumage is much plainer, however, a uniform soft green on the face, mantle and underparts with a grey wash on the crown, rear ear coverts, nape and neck-sides. There is no yellow in the tail-sides.

The sexes are similar, but females are duller and greyer than the males, lightly streaked on the mantle and the grey on the head extends onto the breast. Juveniles are mainly brown, looking very plain faced. They have narrow wing-bars and are diffusely streaked on the breast and flanks.

The song is a soft, slow warbling, the flight call a rather high-pitched rolling or trilling note. 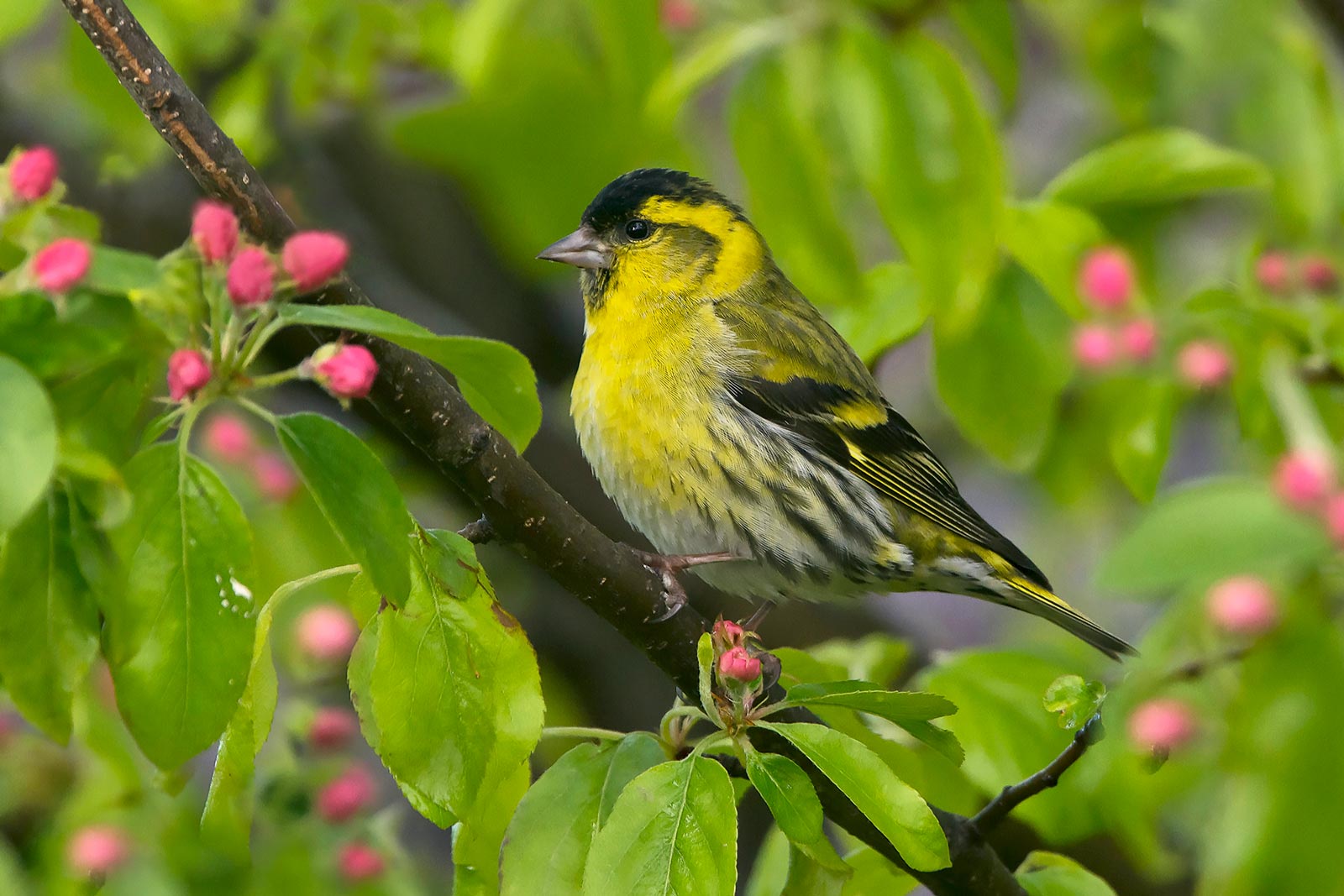 Male Eurasian Siskin (Liverpool, Lancashire, 28 April 2016). Male Siskins are highly distinctive. Note the bold, well-demarcated wing-bars and the blackish forehead, lores, crown and chin. The bill is quite long and 'spiky' and the tail is rather short, with some yellow visible in the sides (Steve Young). 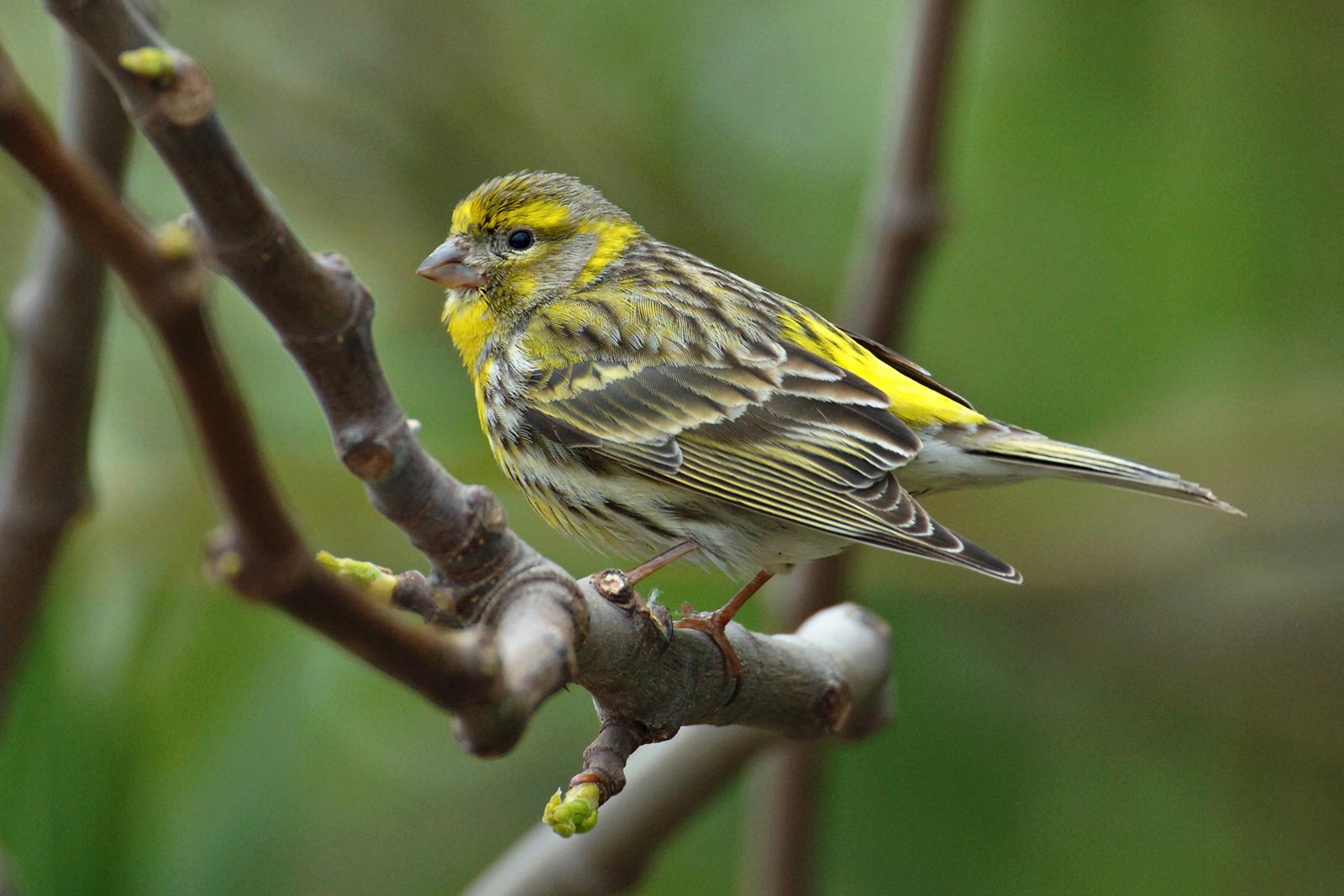 Male European Serin (Lesvos, Greece, 7 April 2006). This male European Serin is structurally rather different from Eurasian Siskin, with its stubby bill and slightly longer tail. The wing-bars are narrow and not well defined, while the face is rather bland, with yellow in the forehead, supercilium and neck-sides and, diagnostically, a pale yellow patch in the lower ear coverts. Note also the prominent yellow rump but lack of yellow in the tail-sides (Richard Brooks). 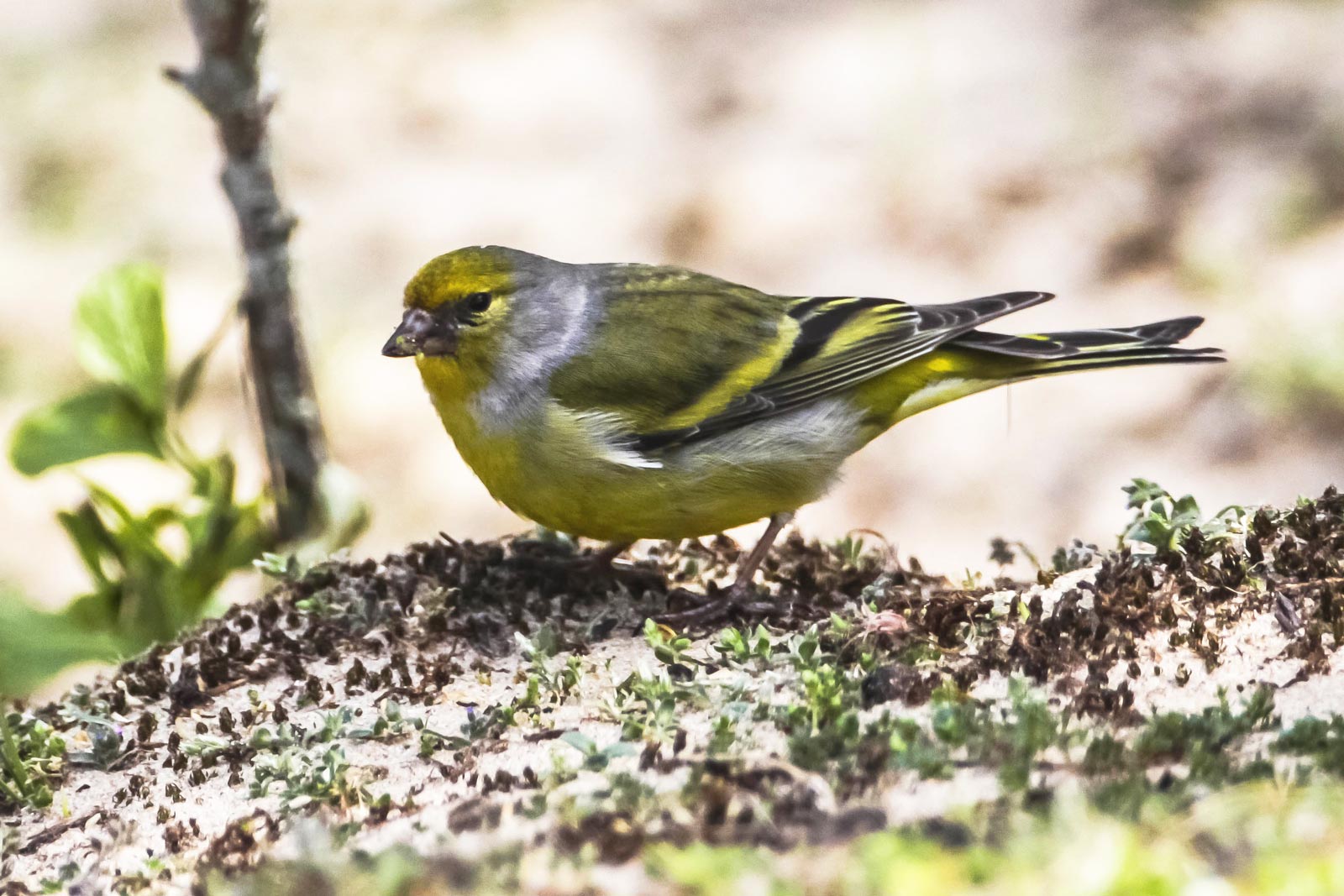 Male Citril Finch (Burnham Overy, Norfolk, 10 May 2015). This bird's bold wing-bars suggest Eurasian Siskin, but the overall plain appearance is wrong for that species. In particular, the flanks are unmarked, the upperparts are barely streaked and there is no yellow visible in the tail sides. Most importantly, note the plain yellowy-green face and a strong grey 'shawl' on the nape and neck-sides (Mark Rayment). 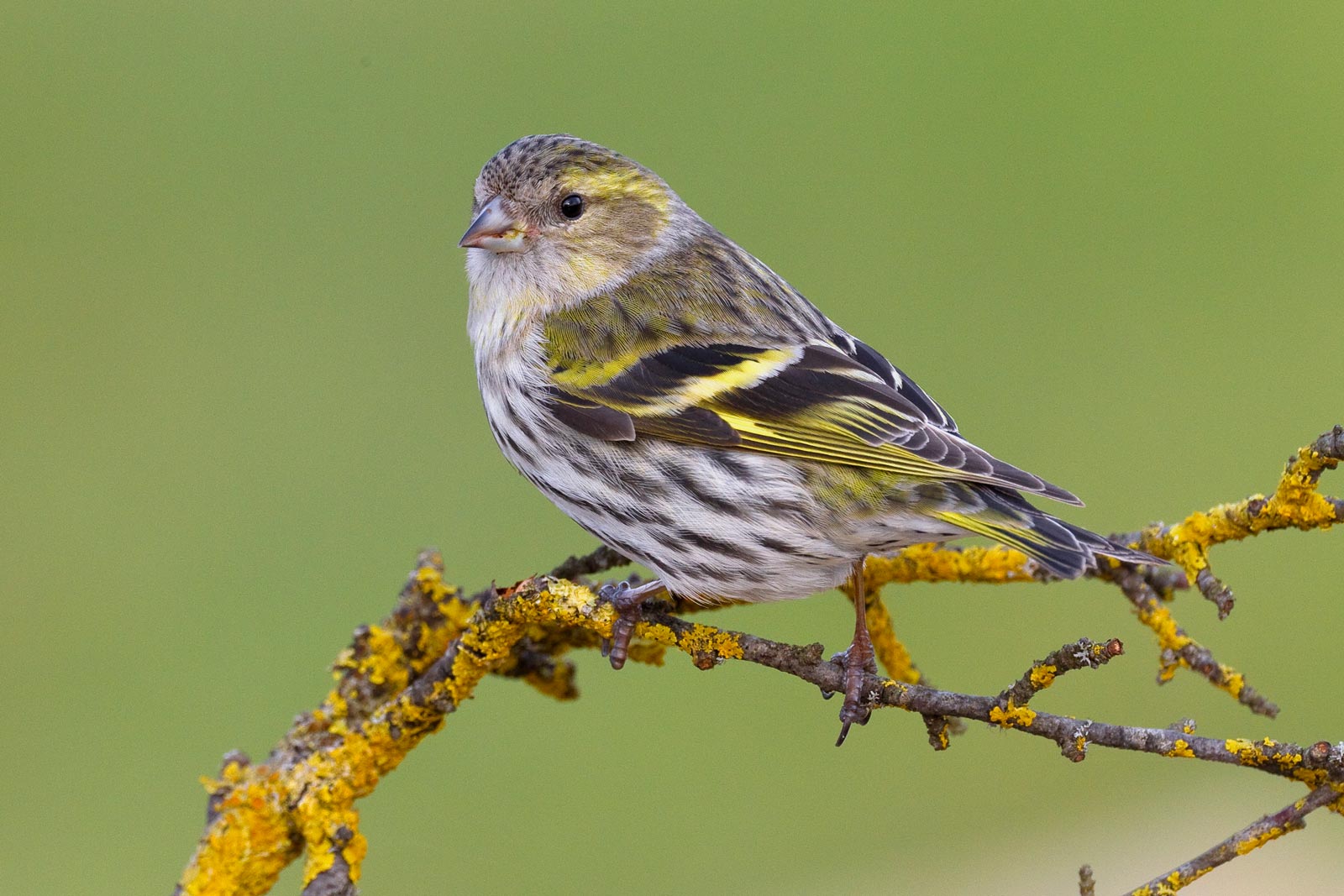 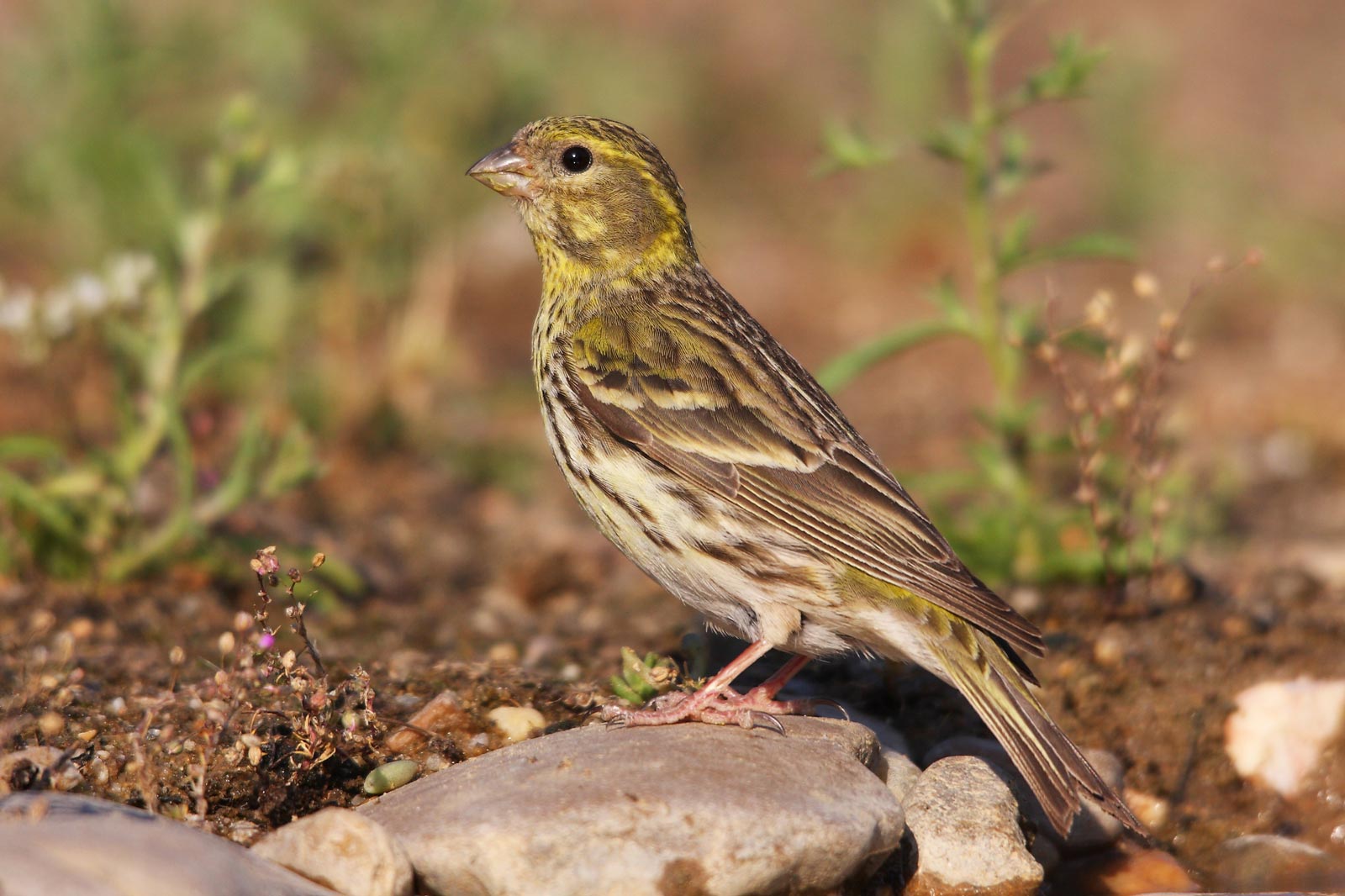 Female European Serin (Valladolid, Spain, 25 June 2011). The stubby bill, longer tail (compared with Eurasian Siskin) and ill-defined narrow wing-bars immediately identify this bird as a European Serin. The yellow hues in the plumage of this female bird are more subdued than those of the male, but the typical face pattern including a pale patch in the lower ear coverts is still evident (Carlos Bocos). 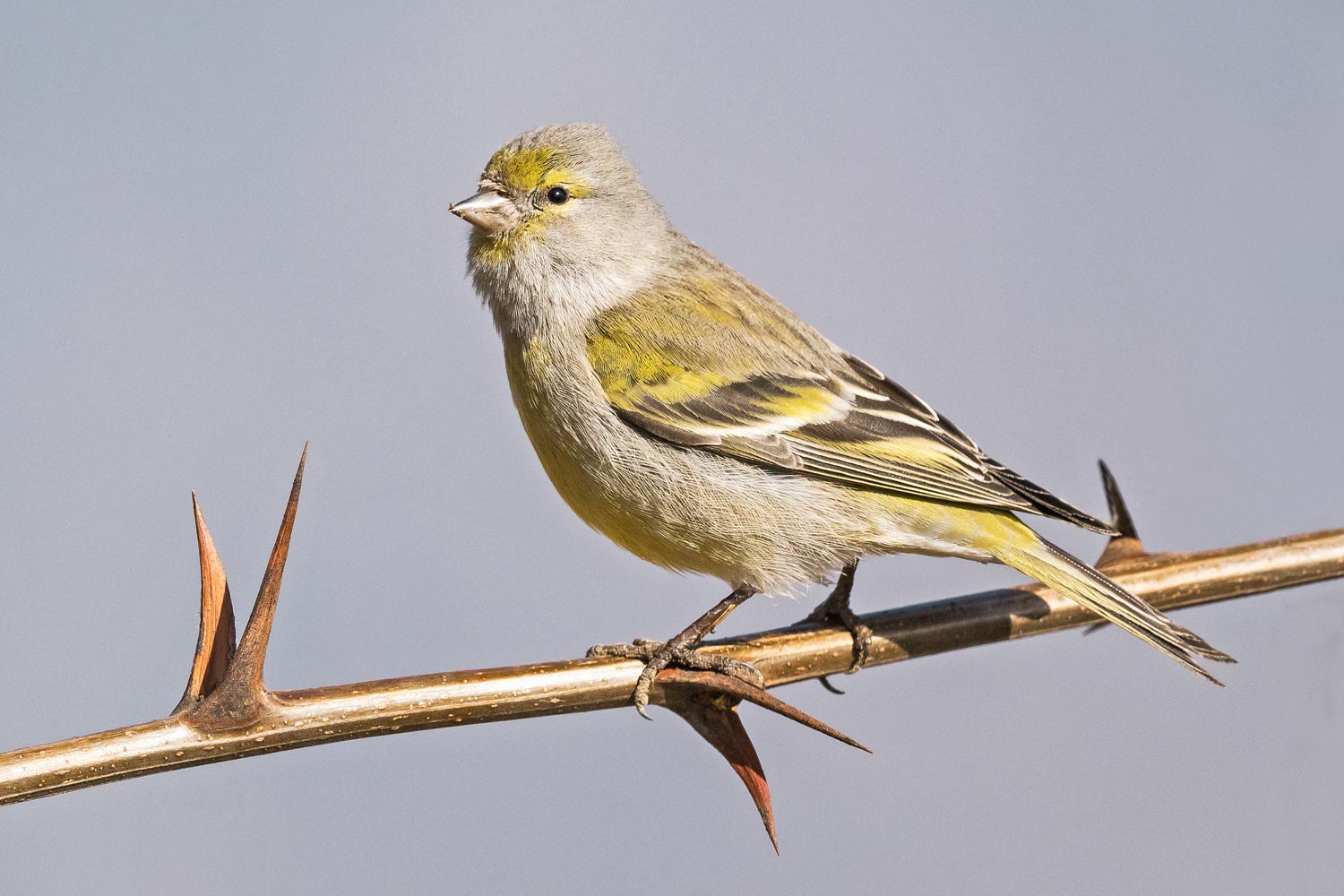 Female Citril Finch (Aosta Valley, Italy, 8 March 2015). Despite the bold wing-bars, the plain appearance of this bird with only minimal streaking in the upperparts points straight to Citril Finch. This can be confirmed by noting the lack of yellow in the tail-sides, the restricted green and yellow face and extensive grey in the nape and neck-sides, which also extends onto the underparts (Alain Ghignone / www.agami.nl). 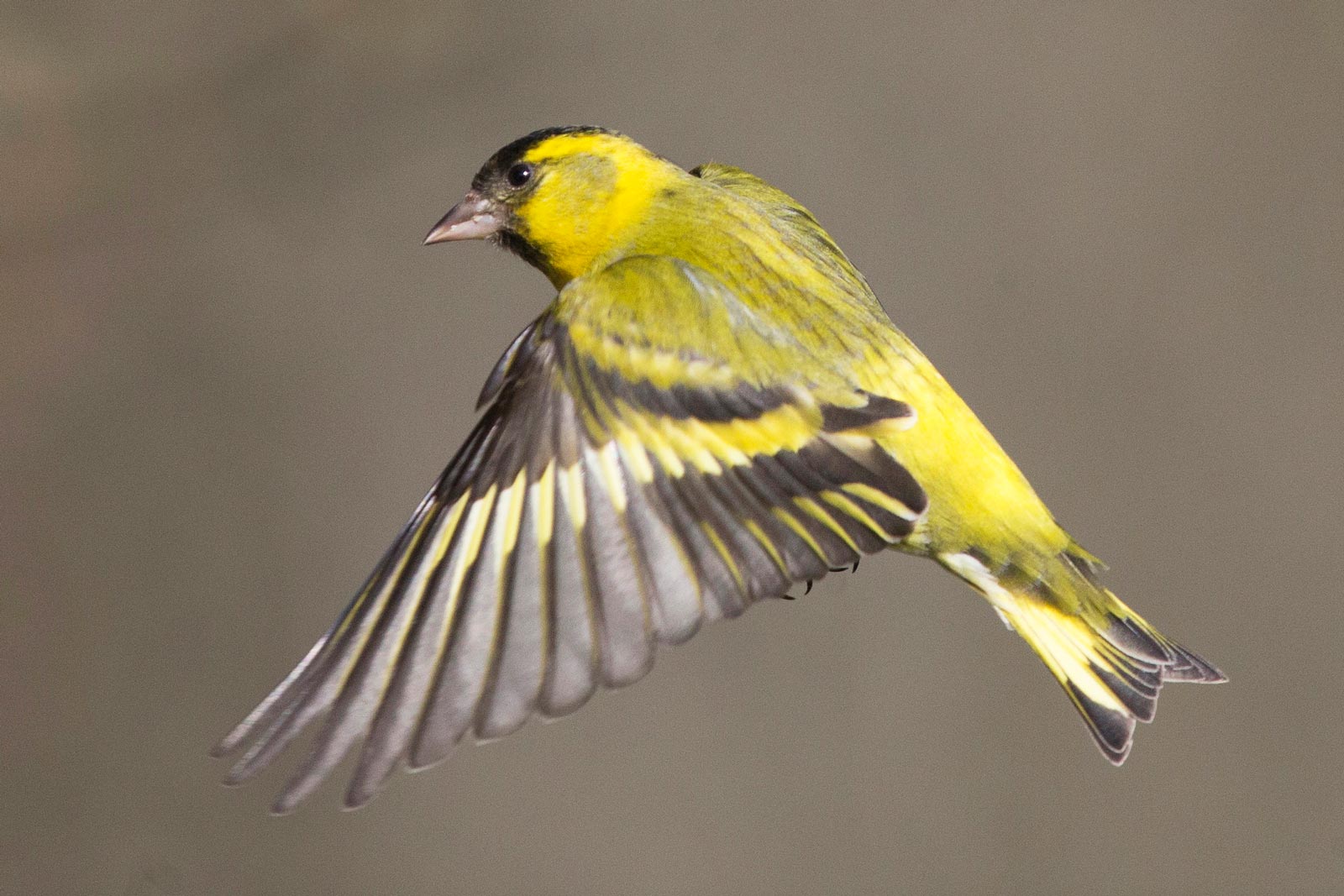 Eurasian Siskin (Helsinki, Finland, 3 May 2014). Flying Eurasian Siskins are tiny and quick, rarely showing the plumage detail visible here. Most striking in flight are the rather narrow, pointed wing-tips and short, strongly notched tail, while the yellow in the tail-sides might catch the eye on a flushed bird. As with all small finches, the call will in most cases have identified the bird before any other details are noted (Arto Juvonen / www.agami.nl). 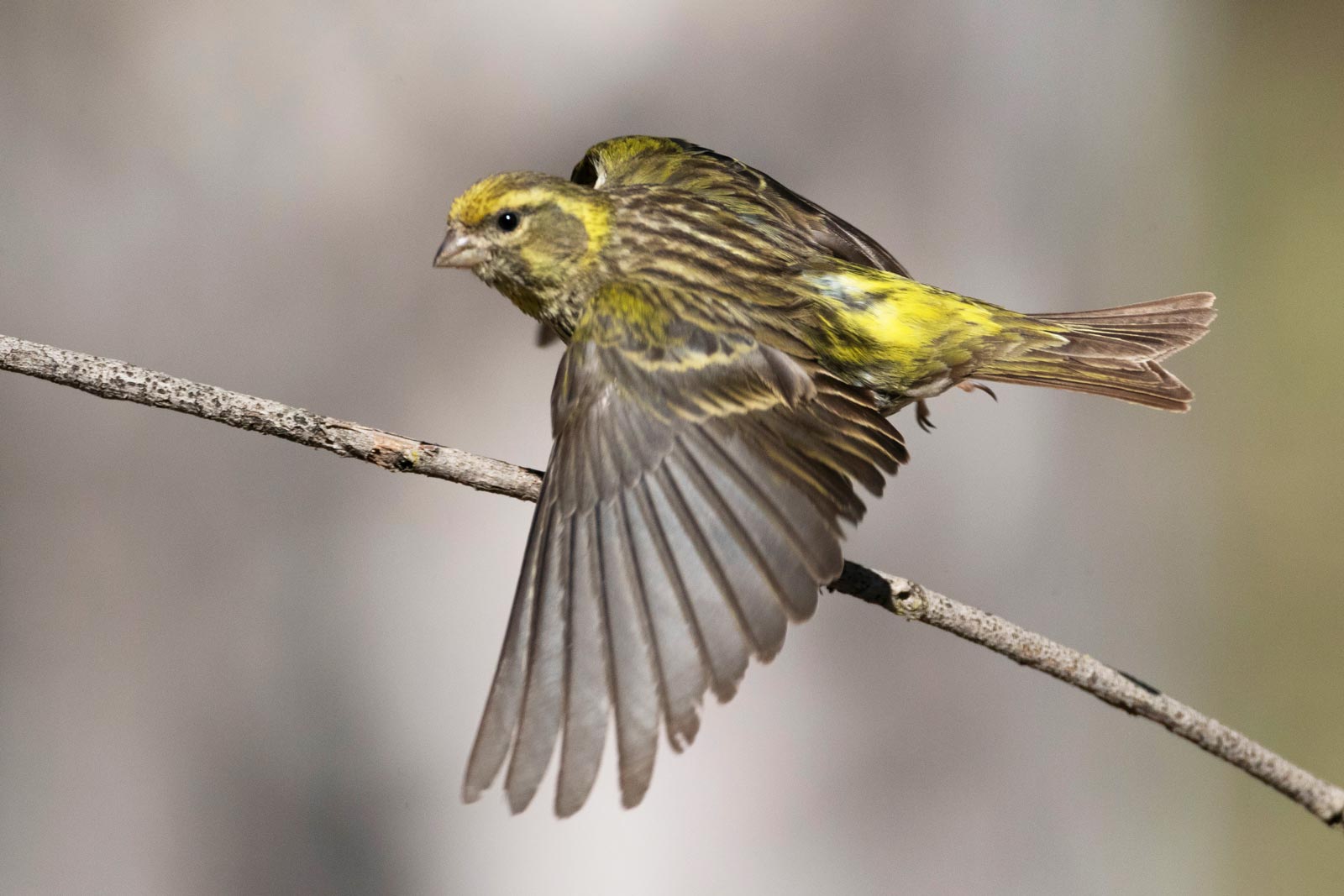 European Serin (Solsona, Spain, 3 July 2017). The flight silhouette of European Serin is stubby and 'bullet shaped', with a blunt 'front end' and medium-length notched tail. The yellow rump patch of adults stands out as a prominent square patch on any view apart from on an overhead bird. A flying bird will invariably be calling also (Marc Guyt / www.agami.nl). 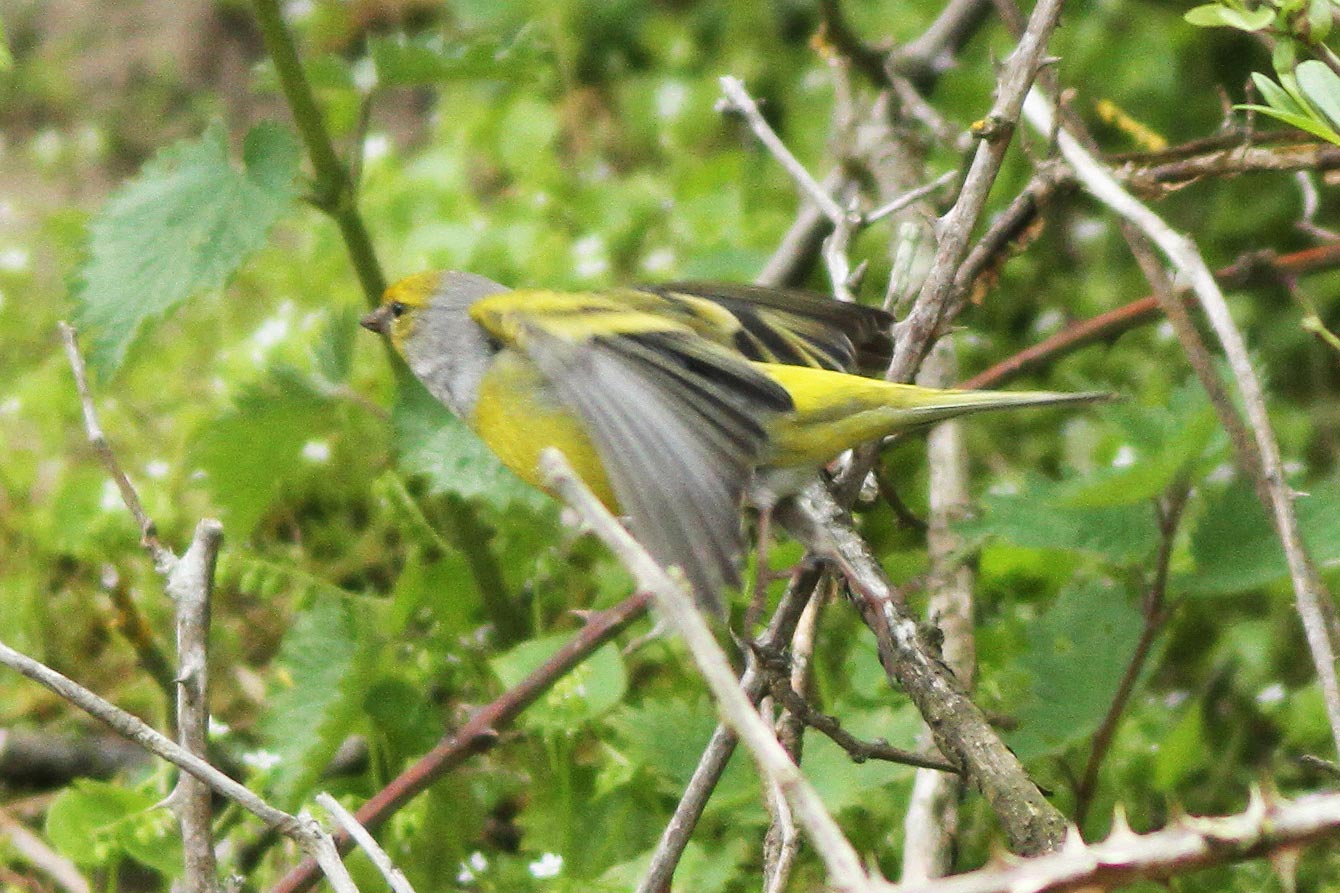 Citril Finch (Burnham Overy, Norfolk, 10 May 2015). The greeny-yellow in the rump and the bold wing-bars of this bird might suggest either European Serin or Eurasian Siskin on a flight view, so a perched view of this scarce species is recommended for a certain identification away from its normal montane haunts. However, calls provide the usual shortcut to identification (Penny Clarke). 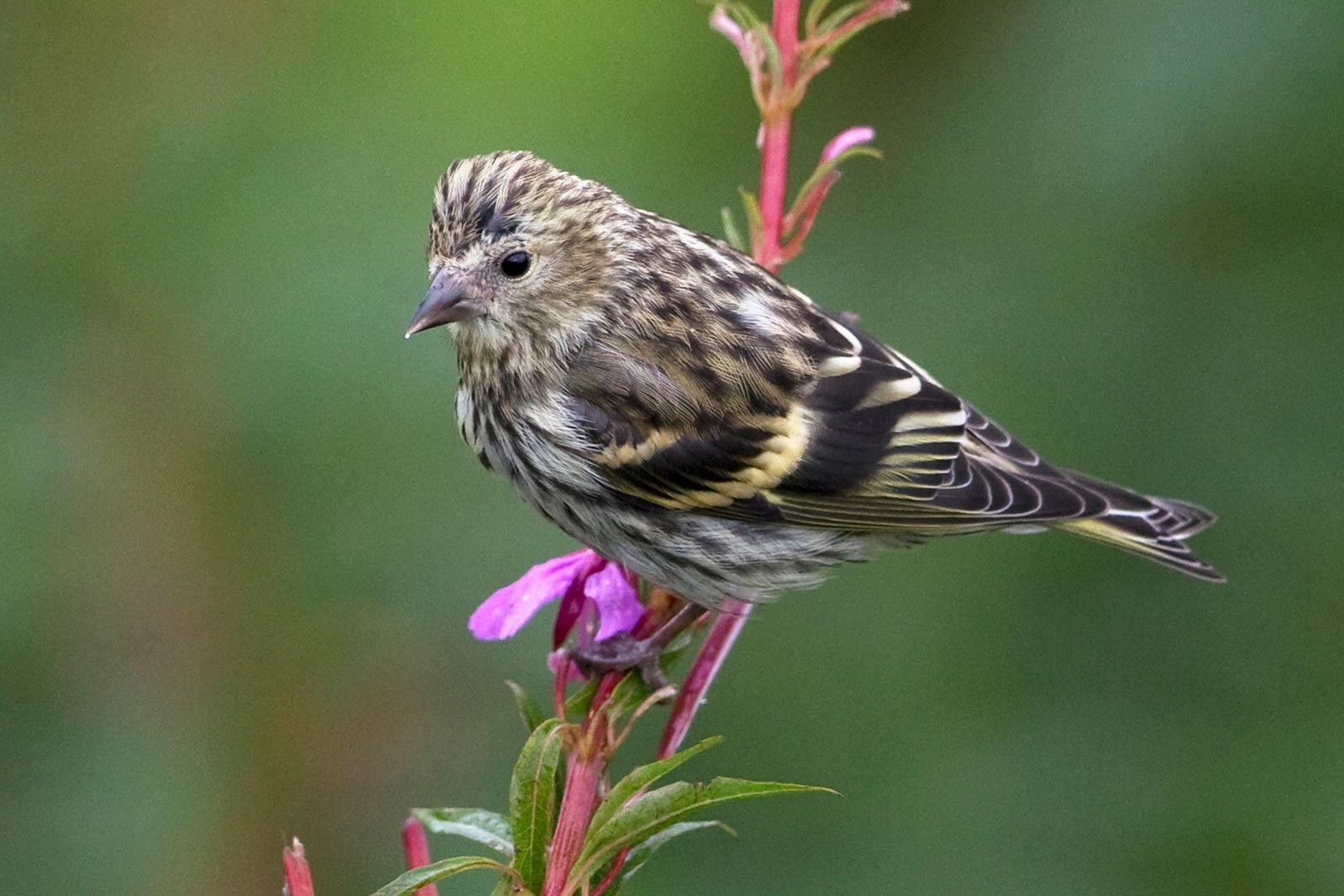 Juvenile Eurasian Siskin (Bwlch Nant yr Arian Visitor Centre, Ponterwyd, Aberystwyth, Ceredigion, 8 August 2017). This juvenile Eurasian Siskin has the 'spiky' bill, short tail, broad wing-bars and yellow tail-sides of an adult, but the yellow in the face and underparts is absent. Instead, the body is very drab, greyish and very obviously streaked, with the face pattern very plain (Robin Chittenden). 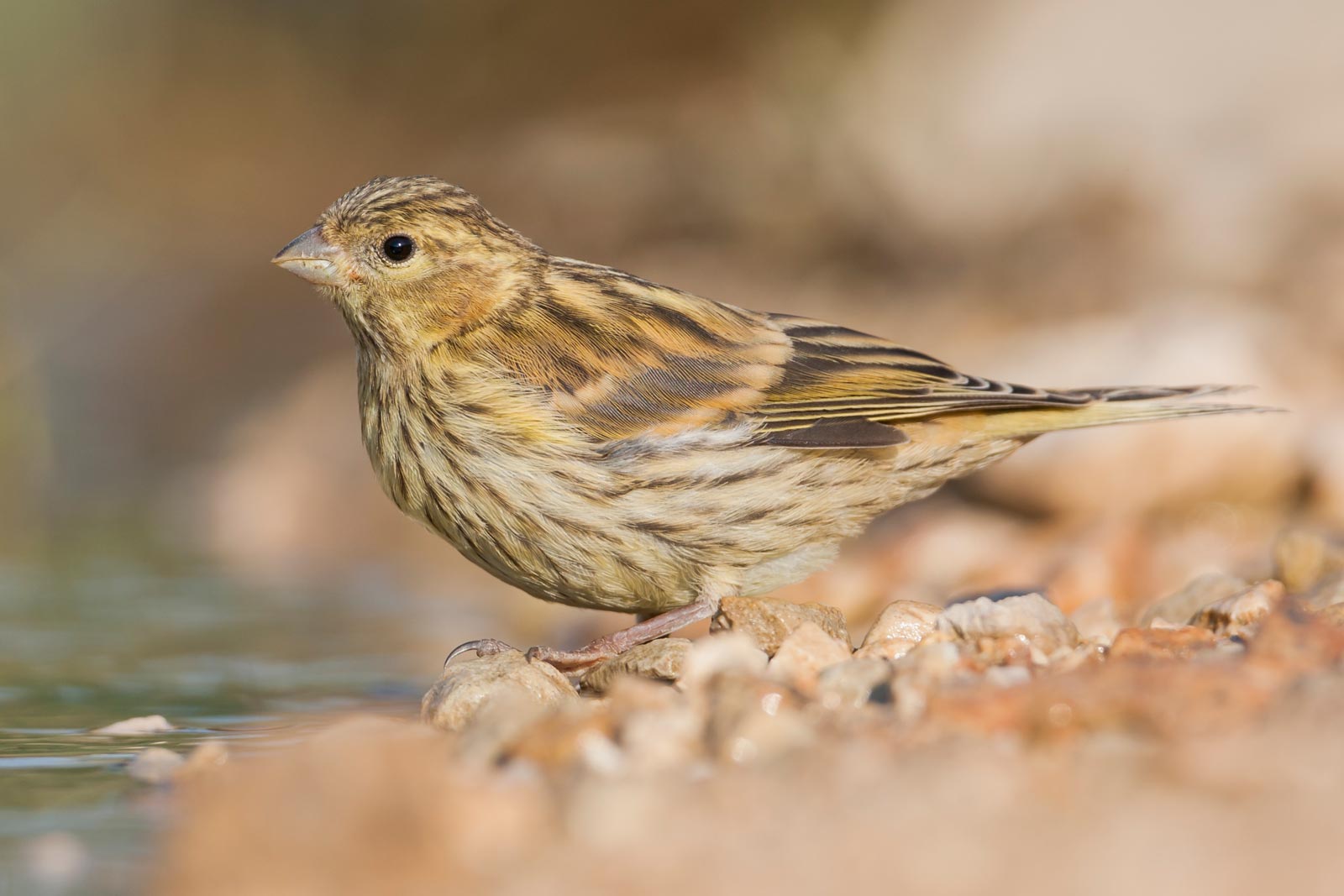 Juvenile European Serin (Zadar, Croatia, 12 June 2011). Juvenile European Serins look rather dull and brownish, but this plumage is highly unlikely to be seen in Britain. The deep-based stubby bill immediately suggests this species and note in particular the suggestion of the adult-like face pattern, narrow, weakly defined wing-bars which are strongly washed buff and the lack of yellow in the tail-sides. There is no yellow rump at this age (Ralph Martin / www.agami.nl). 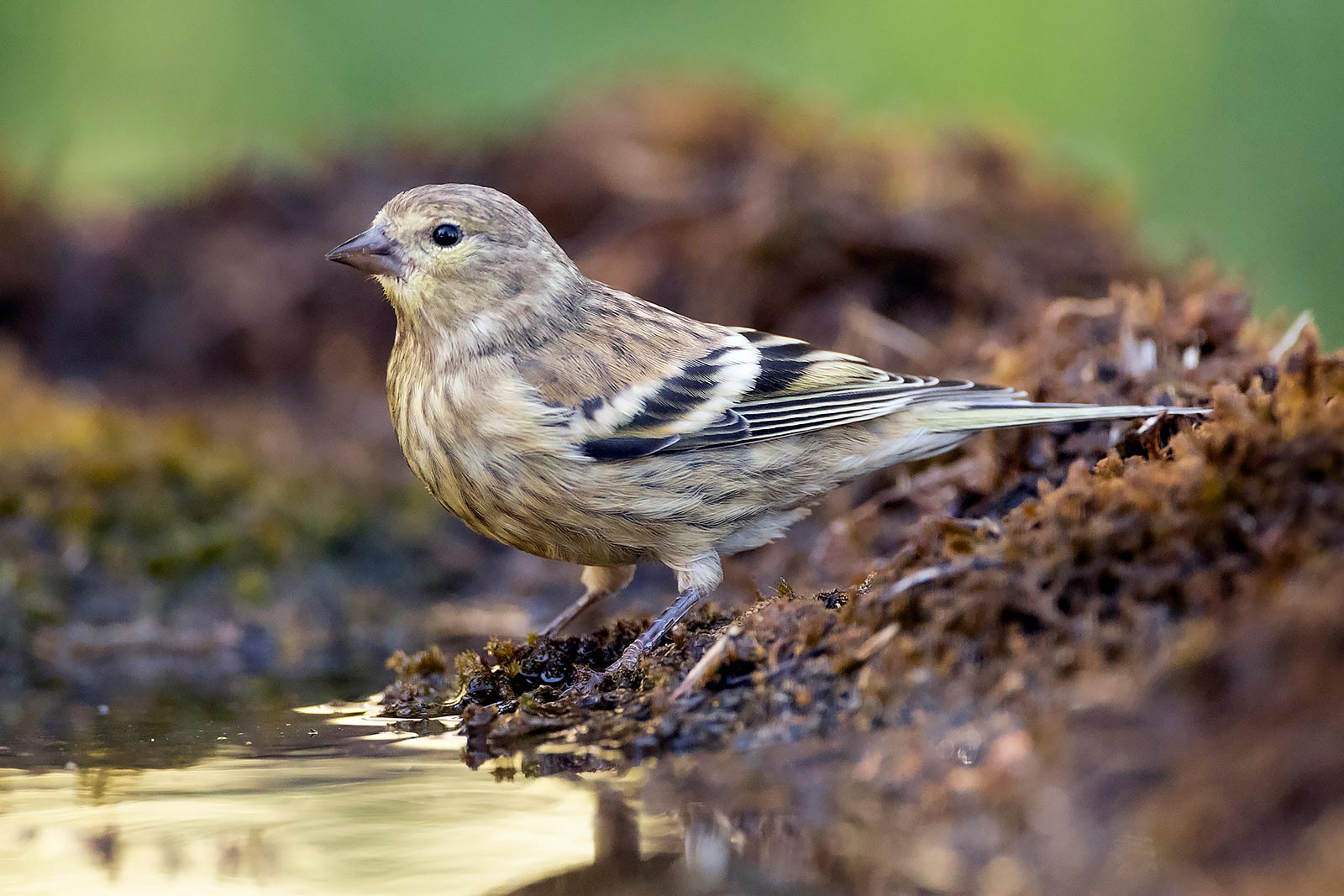 Juvenile Citril Finch (Pre-Pyrenees, Spain, 5 July 2017). The bold wing-bars are the most striking feature of this bird, suggesting a Eurasian Siskin. However, the rest of the plumage (and notably the face) is, despite the streaking, rather plain and uniform and washed with brown. Crucially, note the lack of yellow in the tail sides. This plumage would only be seen on the breeding grounds (Marc Guyt / www.agami.nl).