The amazing Matsalu marshes in Estonia was the setting for one my most memorable birding experiences – watching massive flocks of migrant geese and Common Cranes in glorious September sunshine. I’ve been lucky enough to travel the world as a wildlife filmmaker and photographer, but memories of the Estonian trip are seared into my memory. The photos I took capture some of the spectacle, if not the reverberating chorus of wild sounds.

I was invited to judge the 2017 Matsalu Nature Film Festival www.matsalufilm.ee, which screens a wonderful mix of wildlife and environmental films from around the world in the charming small town of Lihula, 90 minutes’ drive south-west from Tallinn. I accepted quickly, partly for the chance to visit Matsalu National Park to see some of the 300,000 wildfowl and tens of thousands of Common Cranes that pass through in autumn. I sent a film cameraman there 15 years ago to film Barnacle Geese and Common Cranes, and going there has been on my bucket list ever since. I love watching geese, and am a self-confessed ‘craniac’ (someone obsessed with cranes) after working on three films about cranes for the RSPB Film Unit, co-writing a book about their return to Norfolk and photographing the birds reintroduced to Somerset by the Great Crane Project.

The festival ran some early morning trips to Matsalu marshes and, despite a busy workload in the judging room, I managed to get out to witness noisy flocks of Common Cranes heading out from their roost on a moody, misty morning on the south side of Matsalu Bay to feed on surrounding farmland. The cranes stop off to rest and forage in the park’s 50,000 hectares of wild marshes, coastal pastures and wooded meadows as they head from breeding grounds in Sweden, Finland and elsewhere in Estonia on their way south for the winter. As the birds passed overhead it was easy to make out separate families flying in tight groups, with the grating calls of parents answered by the feeble whistling sounds of their brown-headed youngsters. The light levels were too low to capture much more than grainy, motion-blurred images (I call them ‘arty’ when that happens!), but it was great to get my first fix of cranes in Estonia and I knew I’d have more photo opportunities after the festival ended. 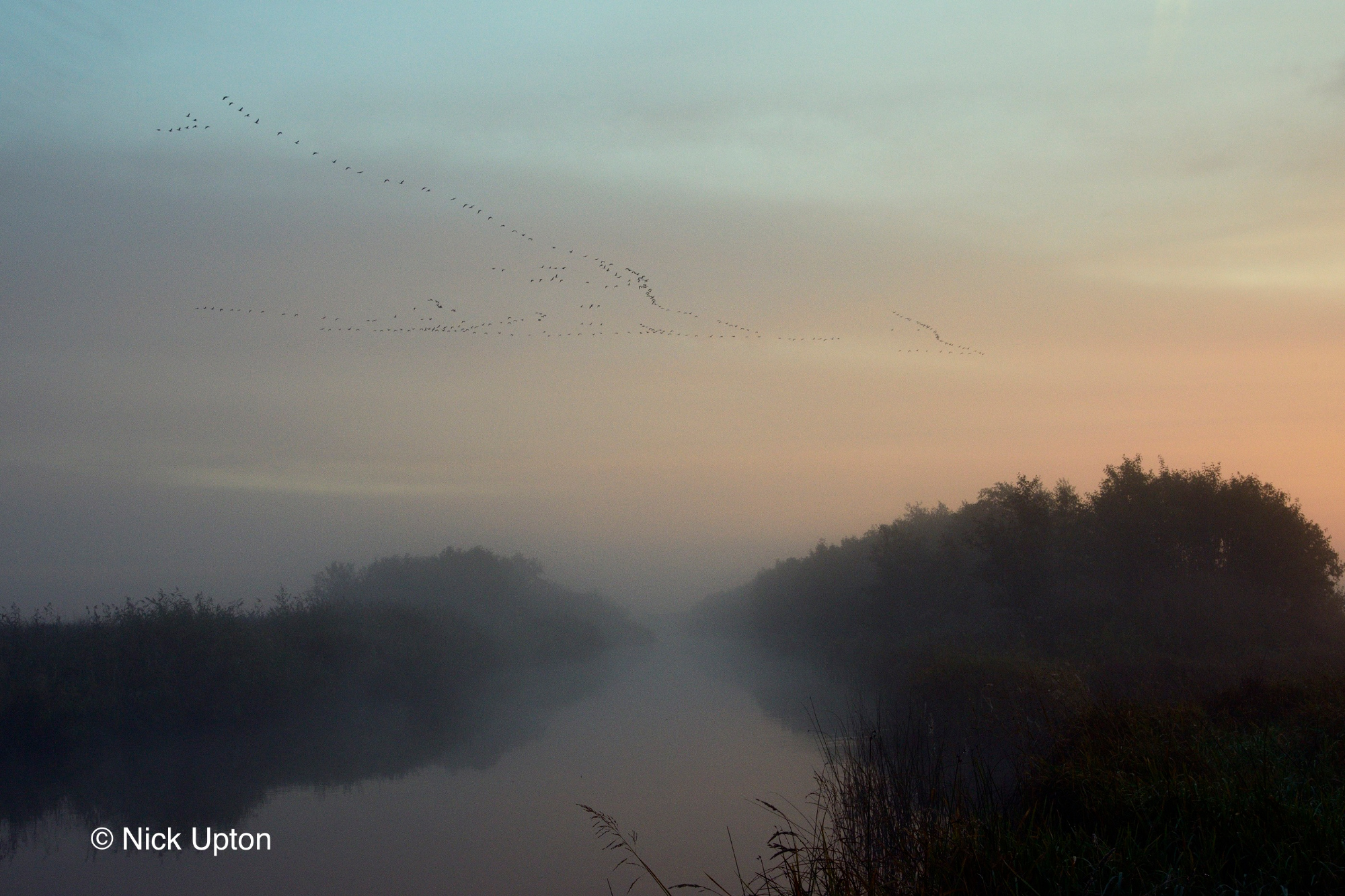 Sure enough, my first day off dawned clear and bright with a nippy northerly wind blowing. A perfect autumn migration day beckoned, the coffee was kicking in and my anticipation mounted. I was driven to the north side of Matsalu Bay by local guide Maire Toming, and was in sheer bird heaven as we travelled through sparsely populated farmland with huge flocks of Barnacle Geese grazing the fields around us. I cautiously took some shots from the car at some distance from the birds, but they seemed calm and we edged closer without causing alarm. I managed to get out to take more images, resting my lens on the roof of the car, as further geese came in to land, and we left them grazing happily. 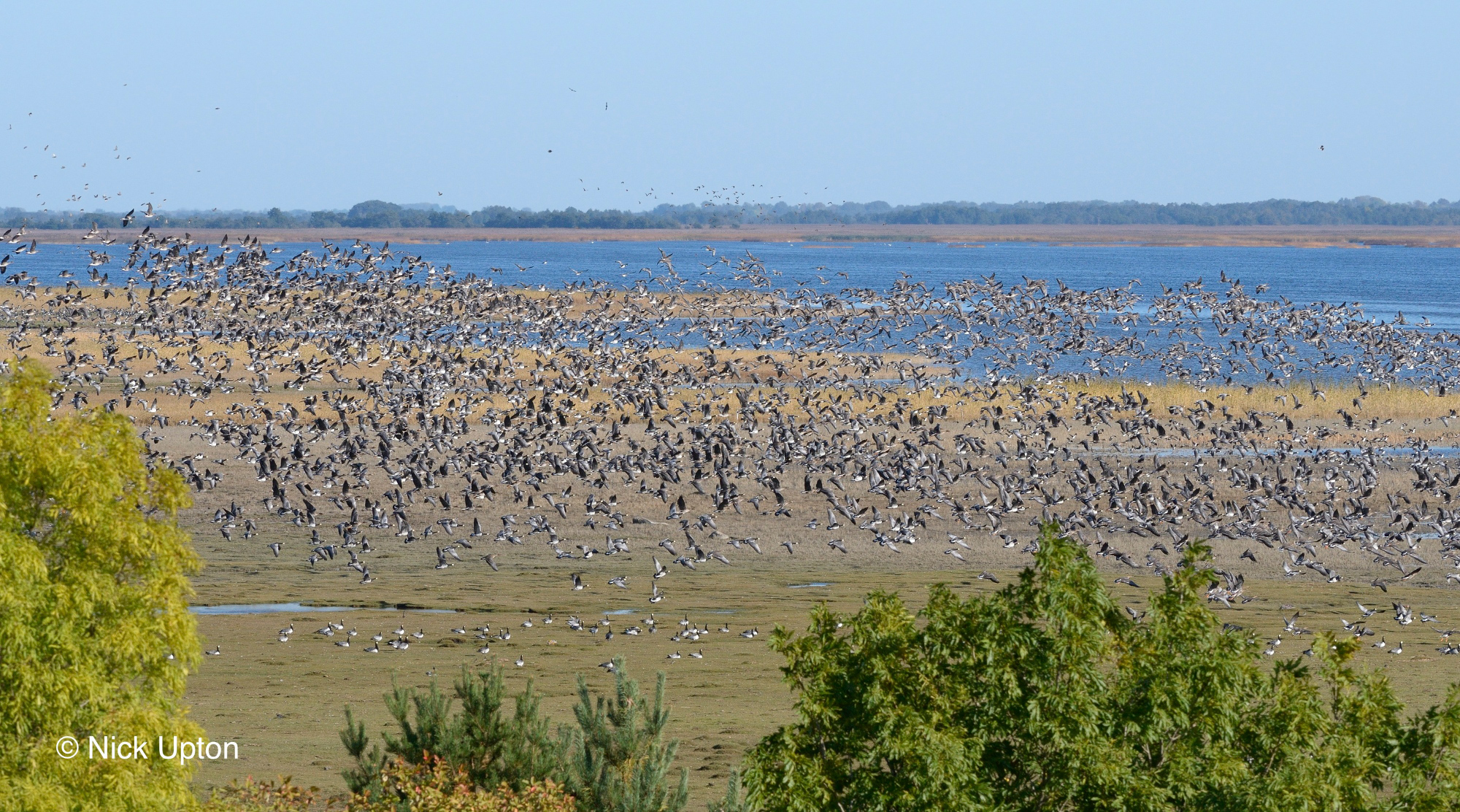 The unforgettable spectacle of thousands of Barnacle Geese is a common encounter in Estonia in September (Nick Upton).

We headed on to the amazing observation tower at Haeska on the north side of Matsalu Bay, where a European birdwatching record was set back in May 1997 – 128 species were seen in a day from this one spot! My own visit was more a day for huge numbers of individual birds, and I clicked away happily as huge flocks of Barnacle, Greater White-fronted and bean geese flew by or settled to graze the coastal marsh. Flocks of migrating cranes kept streaming in from the north, announcing their arrival with joyful calls which carried for miles. Late in the day we headed for Pogari-Sassi, a headland at the north end of the bay, where a huge roost of some 10,000 cranes – about half the number present in the area – were gathering every evening. The views weren’t close, but I never tire of seeing huge noisy, V-shaped flocks of cranes heading for roost in sunset skies, and headed back to Lihula with a big smile on my face. 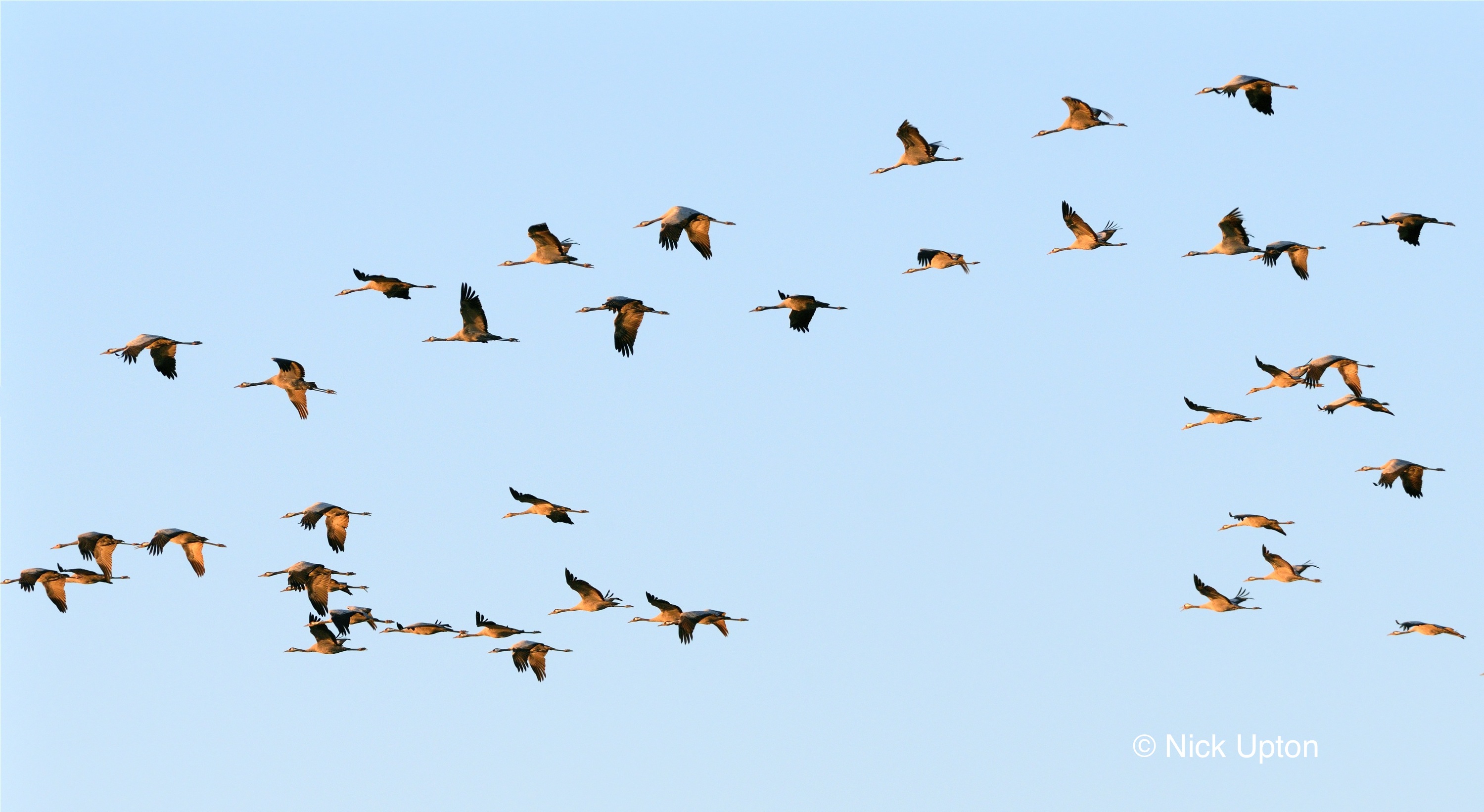 Common Cranes heading to their roost at Matsalu marshes at sunset (Nick Upton).

My final 36 hours in Estonia before flying home were a bit of a blur, but Marika Mann of www.naturetours.ee gave me a further taste of what the country offers naturalists. I spent six hours in a hide from before dawn in wild woods east of Tallinn hoping to see wolves (none came, but they might have done if the wind hadn’t been blowing the wrong way). I then returned to Haeska for more geese, cranes and this time newly arrived families of Whooper Swans, flocks of Great Egrets and hordes of waders and ducks of many species, followed by a misty sunrise boat trip on the Kasari river. We passed several Eurasian Beaver lodges as dawn flights of cranes flew over, a perfect end to a great trip. I’m told that spring migration is even more amazing with around 2 million waterfowl passing through Matsalu, and the beavers are more visible. I’m sure I’ll be back for the 2018 film festival on 19-23 Sept, if not before.