The Wadden Islands Bird Festival is organised by Marc Plomp, owner of the Bird Information Centre on Texel, and Monica Ralling of the National Park Dunes of Texel. An avid birder, Marc had been organising a birding 'big day' since 2010 and in 2016 he joined forces with Monica to develop the Wadden Islands Bird Festival. The event highlights the diversity of Texel's birdlife and raises awareness and money for bird conservation. The 2018 festival will put House Martin at the centre of attention.

The festival has something for everyone. Visitors can discover the island's birdlife by following a route marked with points where volunteers will share their knowledge of the special birds that can be seen. The optics display offers the chance to test and buy the latest binoculars and telescopes, or have your own optics cleaned free of charge. There is a range of organised excursions or you can participate in the Texel Big Day, a 24-hour bird race for charity which this year will take place on 12 May. 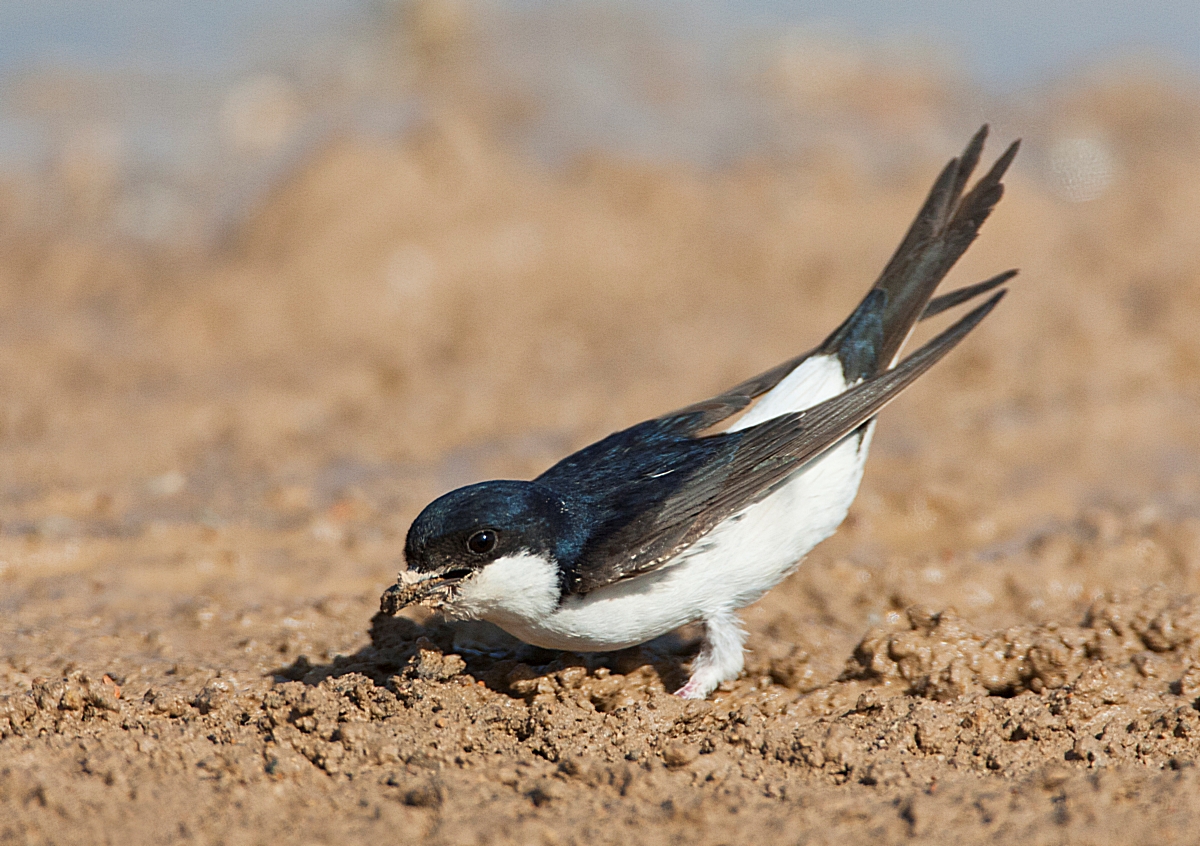 In 2017, a total of eight teams of three or four birders participated in the first Texel Big Day, a 24-hour bird race on foot and e-bike. Teams competed for prizes for the most species seen and the most money raised. With 149 species, the winning team achieved a new record for Texel. A second team triumphed by raising more than €1,100 in sponsorship. Overall, in excess of €7,500 was raised during the weekend to help vulnerable beach-nesting species.

The idea for the Texel Big Day came from the Champions of the Flyway, which has been running in Israel for a number of years. Texel also lies on an important migration route and is accessible for many people. The Big Day provides a great opportunity to get outside alongside fellow birders. Sightings are shared and teams help each other, and you can join in for part of the day or the full 24 hours. 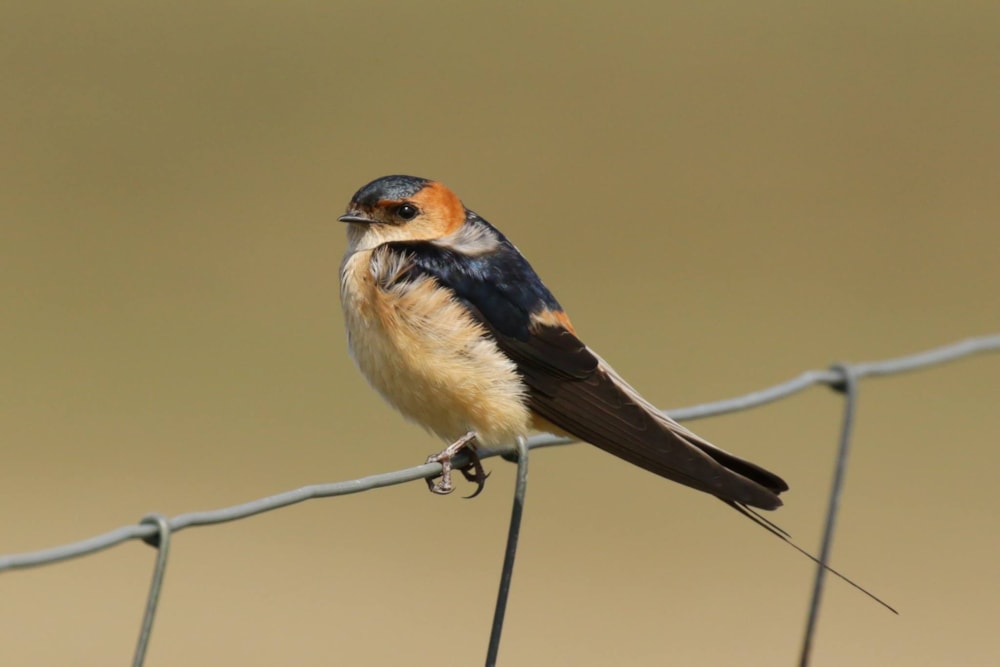 Scarce migrants, such as Red-rumped Swallow, may be seen during the Big Day (Lee Gregory).

Texel's location and range of habitats make it one of The Netherlands' most bird-rich areas. The Big Day provides a great opportunity to discover the island's birdlife, while also contributing to its protection. In 2018, the chosen recipient of this aid is House Martin. As throughout much of Europe, House Martins have declined in The Netherlands during the past decades. By providing information on this species to home-owners, creating mud pools and offering artificial breeding opportunities, we hope to improve the outlook for this species on Texel. BirdLife Netherlands and Sovon Dutch Centre for Field Ornithology have named 2018 the Year of the House Martin and have created several projects to further conserve this species.

Join the Texel Big Day and help this wonderful little species remain part our future summers. It doesn't even cost you 24 hours; you can take time to rest and eat, or simply go birding for a few hours. All you need to do is submit a species list at the end of the day and commit to raising as much money as possible.

Texel is perfectly suited to this event; not only because of its location on major migration routes, but also because of the diversity of species: almost 400 species have been recorded on the island. It also has an excellent network of cycle paths, meaning that you can bird in a sustainable manner on e-bikes.

The teams record all observed species (seen and heard) via the dedicated website or mobile app. A number of vulnerable birds have been precluded in advance to prevent any chance of disturbance. We are hoping for at least 15 teams in 2018. 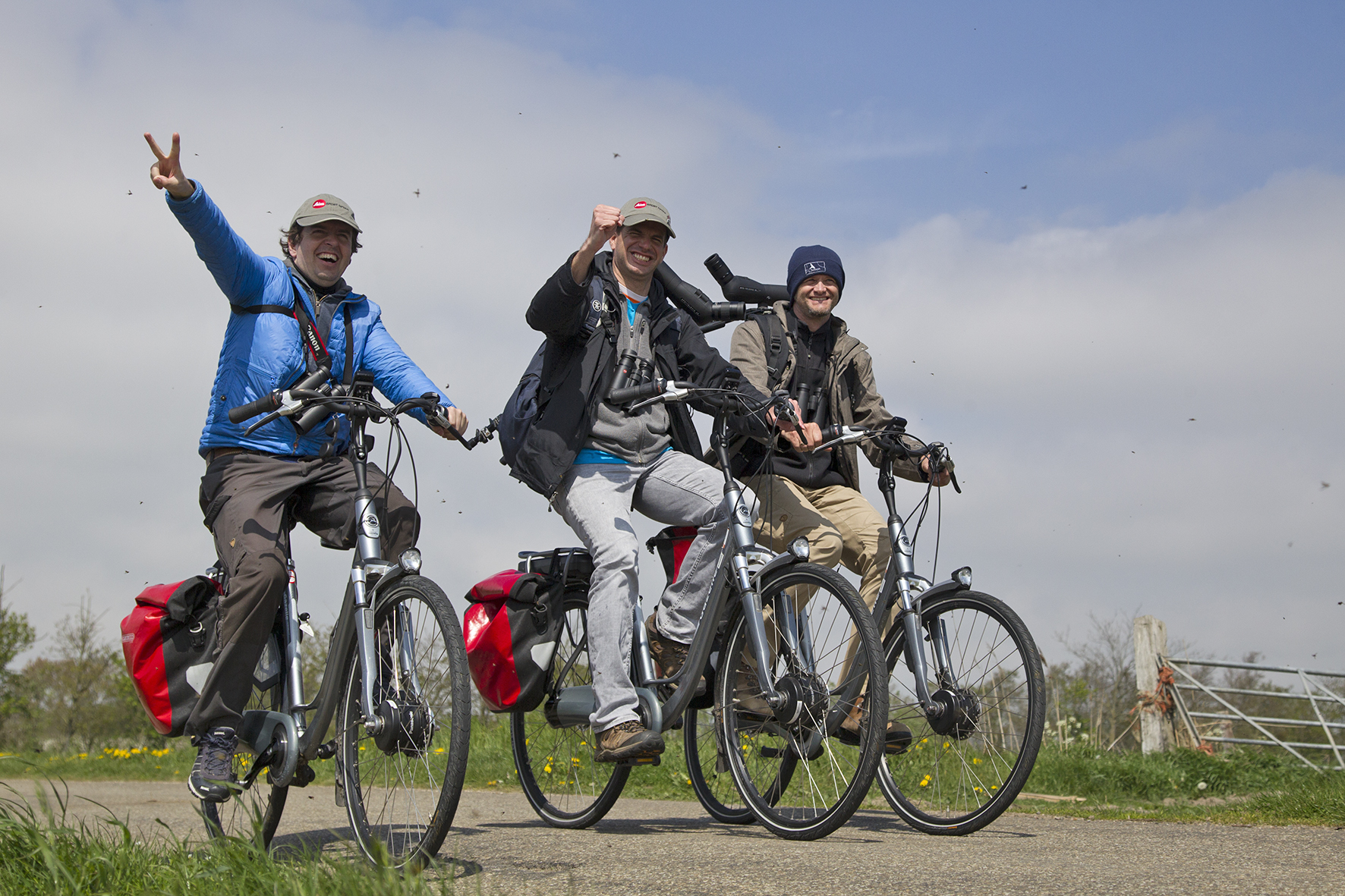 Many teams have well-thought-out tactics, drawn up by analysing observations in the days leading up to the Big Day. Other teams just head out and see which species cross their path. All observations are shared, so that every team knows what the others have seen. This may at first seem counterintuitive, but it can lead teams away from their planned route. When a sighting of a scarce species is shared, you have to decide whether to stick with your plan or deviate to try for the bird. Teams are forced to constantly make such decisions and this ensures the excitement is maintained throughout the day.

Marc Plomb comments: "Watching birds in this way is fun and exciting. There is no hiding for hours behind a bush in the hope that you see something, instead you are actively searching and embracing being outdoors in nature. But, of course, you want to score better than the other teams! In every person there's a birdwatcher. If you see a bird and want to know what kind it is, then before you realise it, you are a real birdwatcher."

You don't need to be an expert to participate in the Big Day. "Even novice birders can easily reach 100 species on Texel," Marc insists. He also emphasises that anyone who watches birds can participate in the Texel Big Day on 12 May 2018. "The first two weeks of May are the best time to see the most species, so it would be difficult not to enjoy yourself."

If you want to join the 2018 Texel Big Day, sign up now. We are aiming to have at least 15 teams and already have interest from people from Spain and Finland – we hope for many more from other countries. One of the few requirements is that we ask teams to collect sponsorship money towards the cause.

There are prizes for the team that records the most birds and that raises the most money. We want to draw attention to the beautiful wildlife in our National Park and above all to be able to help the birds that make Texel their home. 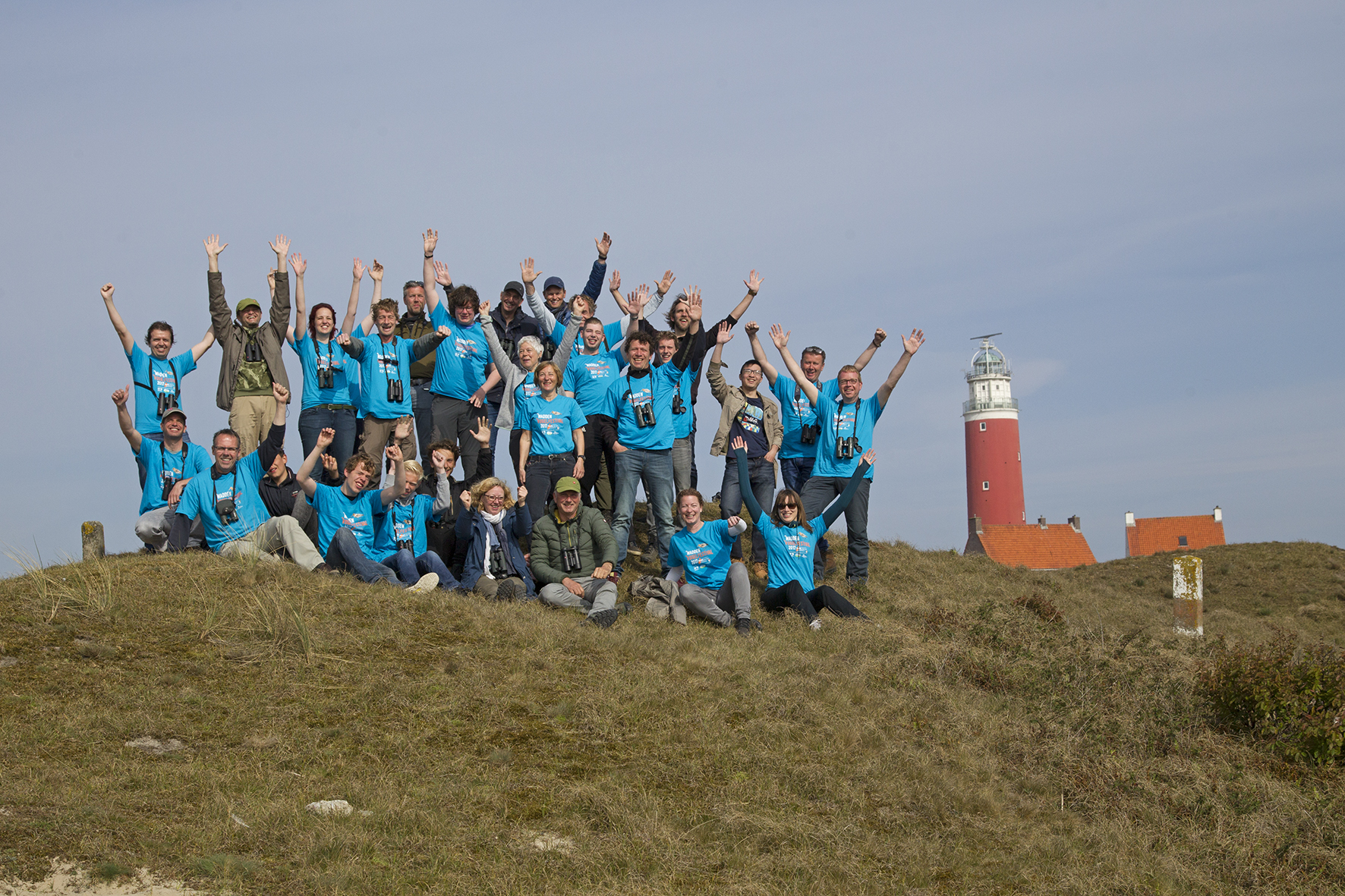 All 2017's competing teams gather for the award ceremony at the Cocksdorp (Harvey van Diek).

Texel Big Day 2017: "Participating in the Big Day is challenging and exciting!"

It's the morning of Sunday 7 May, the day after the Big Day. In the restaurant De Robbenjager, near Texel's lighthouse, the prize-giving ceremony for the Texel Big Day is taking place. Seven teams of keen birders cycled across Texel for 24 hours throughout Saturday searching for as many species as possible.

The atmosphere is electric despite the tired faces. After a day of intensive birding there are plenty of red eyes, but this doesn't stop the fun. Despite the fatigue, everyone is still alert, watching the sky outside and hoping for one last special observation.

The jury proclaim this first Texel Big Day a huge success. This was in no small part due to the camaraderie between the teams, helped by all those taking part sharing their observations in the group app. Participants, the jury and organisers alike were very pleased.

In third place, with 146 species, are the Dutch Knights. In second place, the youngest team consisting of four boys from Texel all aged between 13 and 17 years, the Young Dogs recorded 147 species. First place goes to Rock around the Clock, the current Dutch record holders, with 149 species. What a close finish! 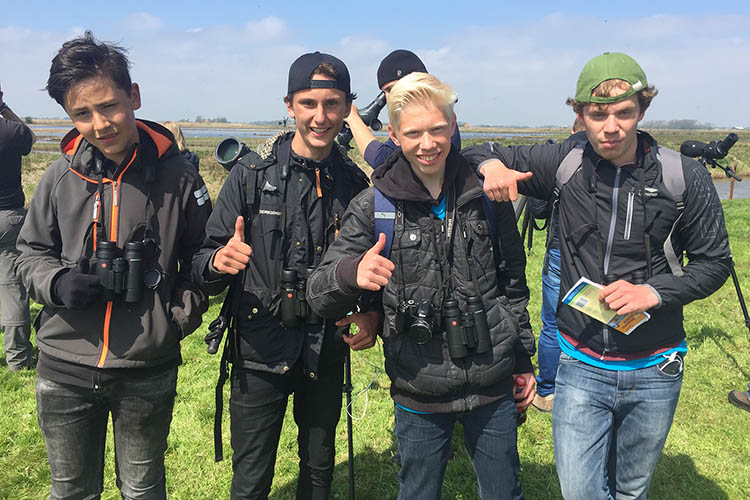 After the ceremony we speak with a few teams. Jeroen Breidenbach of the winning team and holder of the Dutch national record with 201 species in a single day is delighted. "It was very exciting and great fun. The atmosphere was fantastic. We continued until the end. Our team did not arrive at the finish line until 23:50 hours."

Tim Schipper and Jarne Kompier of the Young Dogs are also very proud and satisfied, despite being exhausted. Jarne tells how he first became interested in birds at a very young age through his grandfather. "I went with him every weekend." He now spends his time birding with friends most days, and spent the Easter holidays preparing for the Texel Big Day. The boys scouted out the best sites, finding territories of birds they knew would be present on the day.

Tim recounts how they were out near a reedbed in search of a Reed Warbler just half an hour before the end of the Big Day at 11.30 pm. The bird sang and that gave them one more than the Dutch Knights in the closing minutes of the competition.

Three of the four team members must have seen or heard the species in order for it to count. Between the teams it goes on trust. "But I can tell you that as a participant, it can be painful if you are the only person in your team to have missed something," says Marc Guyt of the Dutch Knights. This happened to him with Spotted Flycatcher. "I was greatly disappointed but we had to continue to our next location. Spending too much time searching for one species is one of the biggest pitfalls."

Marc describes the Texel Big Day as a continuous rollercoaster of emotions. "You get impulses all the time: do I depart from my route, or stick to the plan? It can be difficult, especially if you are going to miss out on common species; you become fanatical. But you have to learn to let go and stick to your plan."

Jeroen reveals some of his tactics: "You have to get nocturnal species during the first evening because everything you've seen at night saves time during the day." For example, during the first night his team heard Bluethroat, Spotted Crake and Woodcock. The Young Dogs recorded both Long-eared and Barn Owls early during the night. When asked whether they are they going to participate again, they answered: "What do you think? Of course! As a birder you simply do not want to miss this!" 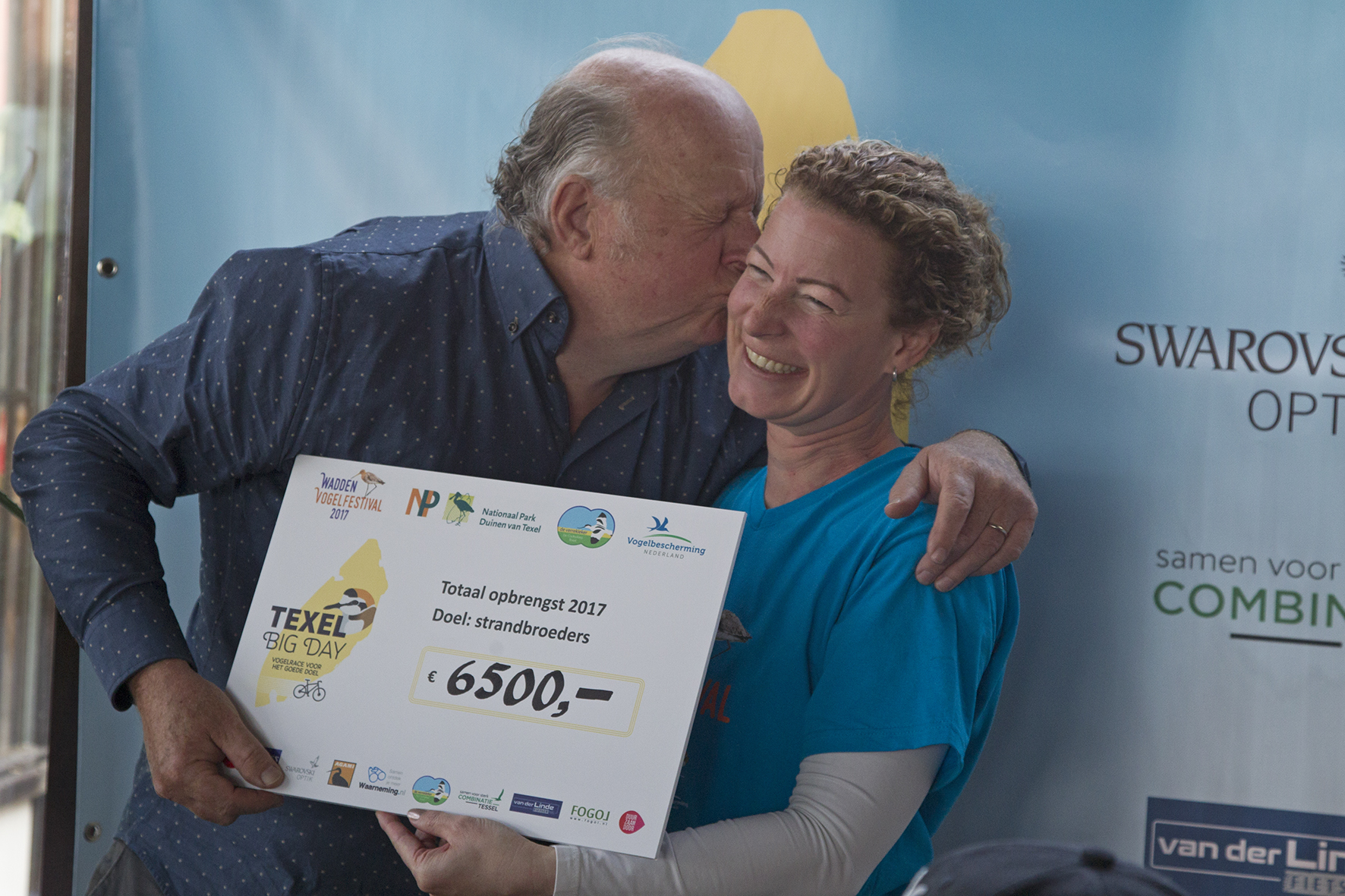