August is the month when waders begin returning in earnest, with early post-breeding adults and failed breeders followed by juveniles. Among the myriad identification difficulties presented will be those of the smaller calidrids, and here we examine three species with plenty of potential for confusion: Dunlin, Curlew Sandpiper and White-rumped Sandpiper. The first is very common, the second scarce and the third rare though annual in small numbers. There is plenty of scope for confusion among them, particularly in non-breeding plumages. 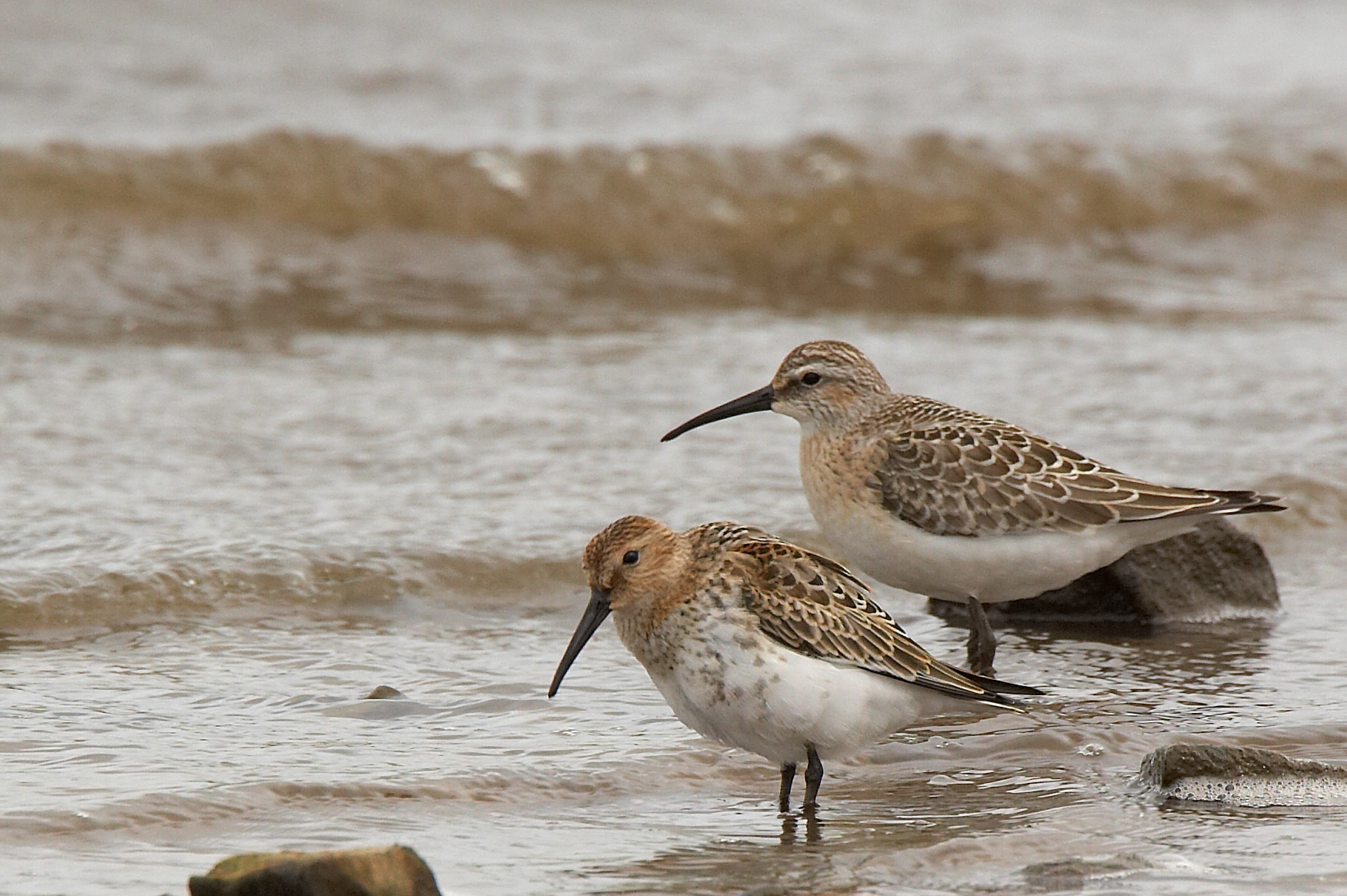 Dunlin, left, and Curlew Sandpiper (Upper Tamar Lake, Cornwall, 14 September 2006). These two species are roughly similar in size and can often be seen together, though the former averages slightly smaller. This portrait enables the structural features of each to be compared. Although this particular Dunlin is a long-billed individual, its bill is still a fraction heavier at the tip and the base than that of the accompanying Curlew Sandpiper. Note also the latter’s rather attenuated rear end and slightly longer exposed tibia (Howard Bottrell).

Dunlin is the commonest of all our small waders, and a regular passage migrant and winter visitor around our coasts, as well as a breeder in some of our upland areas.

This is the default small wader in Britain, but its near year-round presence masks a somewhat complex status. Three forms occur regularly. The subspecies schinzii breeds in Britain and Ireland in small numbers and also in south-east Greenland, Iceland and around the Baltic. It winters in West Africa. It is these birds that comprise many of our migrant Dunlin in spring and again in late summer and early autumn. Performing a similar migration is the north-east Greenland form arctica. In winter, however, our migrant Dunlin are replaced by larger numbers of wintering alpina from Scandinavia and north-west Russia

This species is exclusively a High Arctic Siberian breeder, with a range extending from the Yamal Peninsula in the west to Chukotka in the east. It has an extensive winter range which stretches from West Africa to Australia. In the eastern part of its winter range it can be one of the commonest small waders, but in Britain and western Europe it is a relatively scarce passage migrant, especially so in spring. For most of us this is a bird of autumn, occurring typically between July and October, with peak numbers in September.

Adults come first, mainly in August, while juveniles arrive in September. In most years numbers are modest, and mainly confined to eastern coasts, but some years – presumably of high breeding success – see much more significant influxes of juveniles. The species is exceptional in winter.

This species breeds from northern Alaska east through northern Canada as far as Southampton Island. It is a very long-distance migrant, wintering in the south-east of South America, including the Falklands. Unsurprisingly, therefore, although still rare, it is among the commonest of the North American waders to reach Britain. There is also a small Siberian breeding population believed to be the source of many of our east coast records.

Two types of arrival can be discerned: an early autumn peak of adults, largely focused on North Sea coasts, and a late autumn peak of juveniles/first-winters with a more westerly distribution. This pattern suggests that at least some of our early autumn birds may have come on an eastern route.

By contrast, the arrival pattern of late autumn birds is far more suggestive of a direct transatlantic passage. Despite these occurrence patterns, however, this is a species which has the potential to occur anywhere in Britain (even inland) between July and November. Spring records are very few.

All forms wear rapidly, however, and the adults can just look dark by mid-summer. In winter adults and first-winter birds, the typical drab 'mud-brown and white' appearance is the norm. Juveniles are crisply marked above, with clear pale feather fringes and, unusually in small waders, distinctive smudgy black blobs along the upper flanks, though these disappear during the autumn as the birds moult into their first-winter plumage. The call is easily learnt – a rather drawn-out descending treeep.

Winter adults and first-winters are plain grey-brown above and white below, much more like a Dunlin, and are best identified by structural characters. Juveniles are very different, however: bright white below, peachy breasted and marked above with beautiful crisp, 'frosty' white feather fringes. Although rarely necessary to secure an identification, a flight view will show a prominent square white rump patch. The call is a distinctive rich chreet.

White-rumped Sandpiper is a little smaller than Dunlin, but still significantly larger than the otherwise similar stints. Its bill is short and its legs generally appear short to medium length (though this is partly an effect of their stance, for they can sometimes look surprisingly long in the leg).

Most striking is the shape of the back end: long and slim with a good projection of primaries beyond both the tips of the tertials and the tail-tip. Summer adults have pale rufous feather fringes in the crown and upperparts and streaks and arrowhead markings in the flanks leading back from a streaky breast-band.

Winter adults and first-winters are, like all of our trio, a somewhat anonymous greyish colour, but juveniles are beautifully marked with white and rufous fringes in the upperparts and a narrow, stint-like 'V' at the mantle sides. Limited streaking in the flanks is present in all plumages. The clinching feature is the narrow band of white across the uppertail coverts. Despite its name, this species is not white rumped! The call is a thin, high-pitched jeeet. 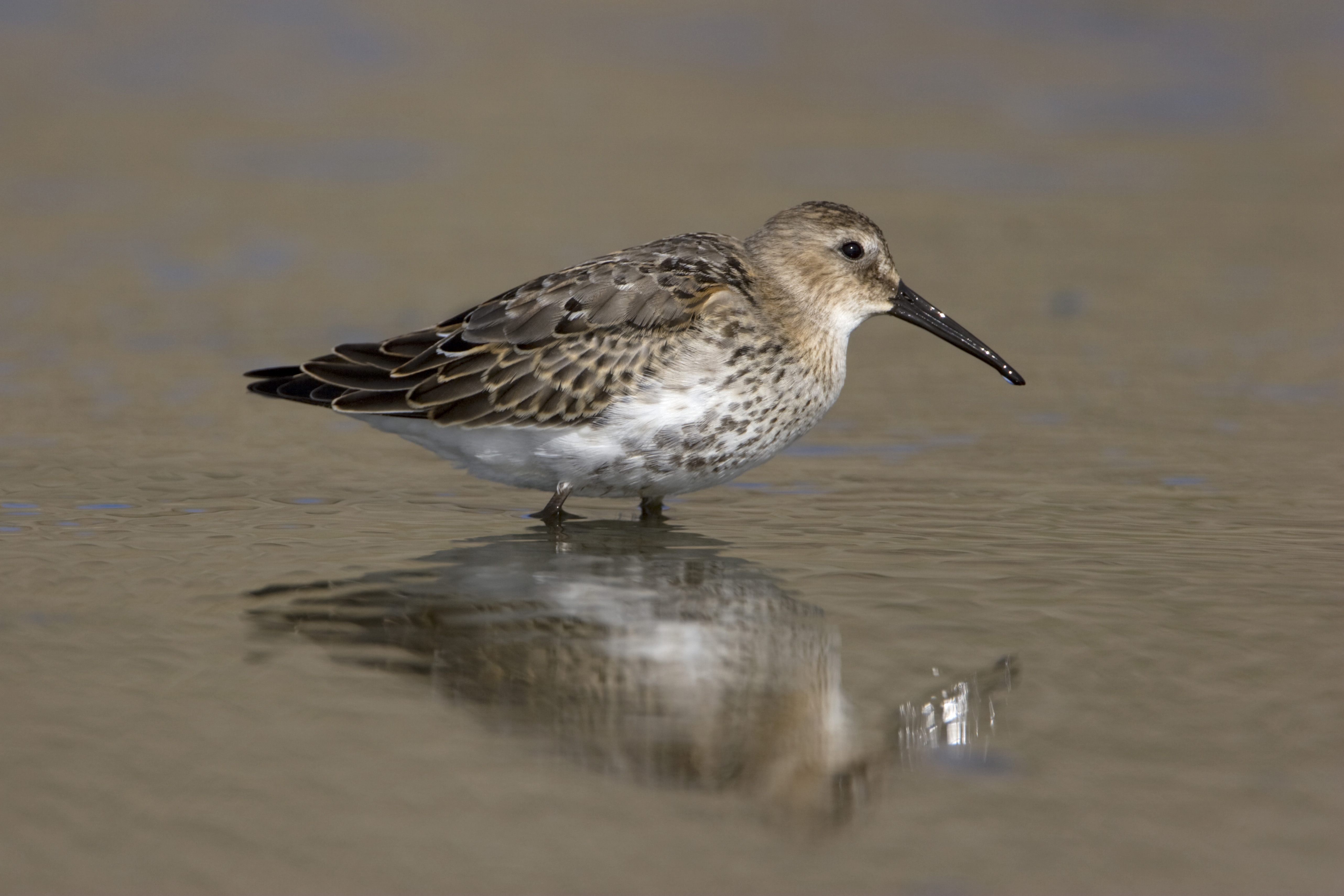 Juvenile Dunlin (Salthouse, Norfolk, 12 September 2005). This young Dunlin shows the typical rather hunched, almost neckless posture, thick-looking bill and short rear end. Its wing feathers are fully juvenile with neat pale fringes forming a scaly pattern, but new grey adult-type feathers are already present in the scapulars and the mantle. This appearance is typical of birds in the transitional stage from juvenile to first-winter plumage. Note also the prominent blurry dark spotting in the underparts, a characteristic feature of juvenile Dunlin (Robin Chittenden). 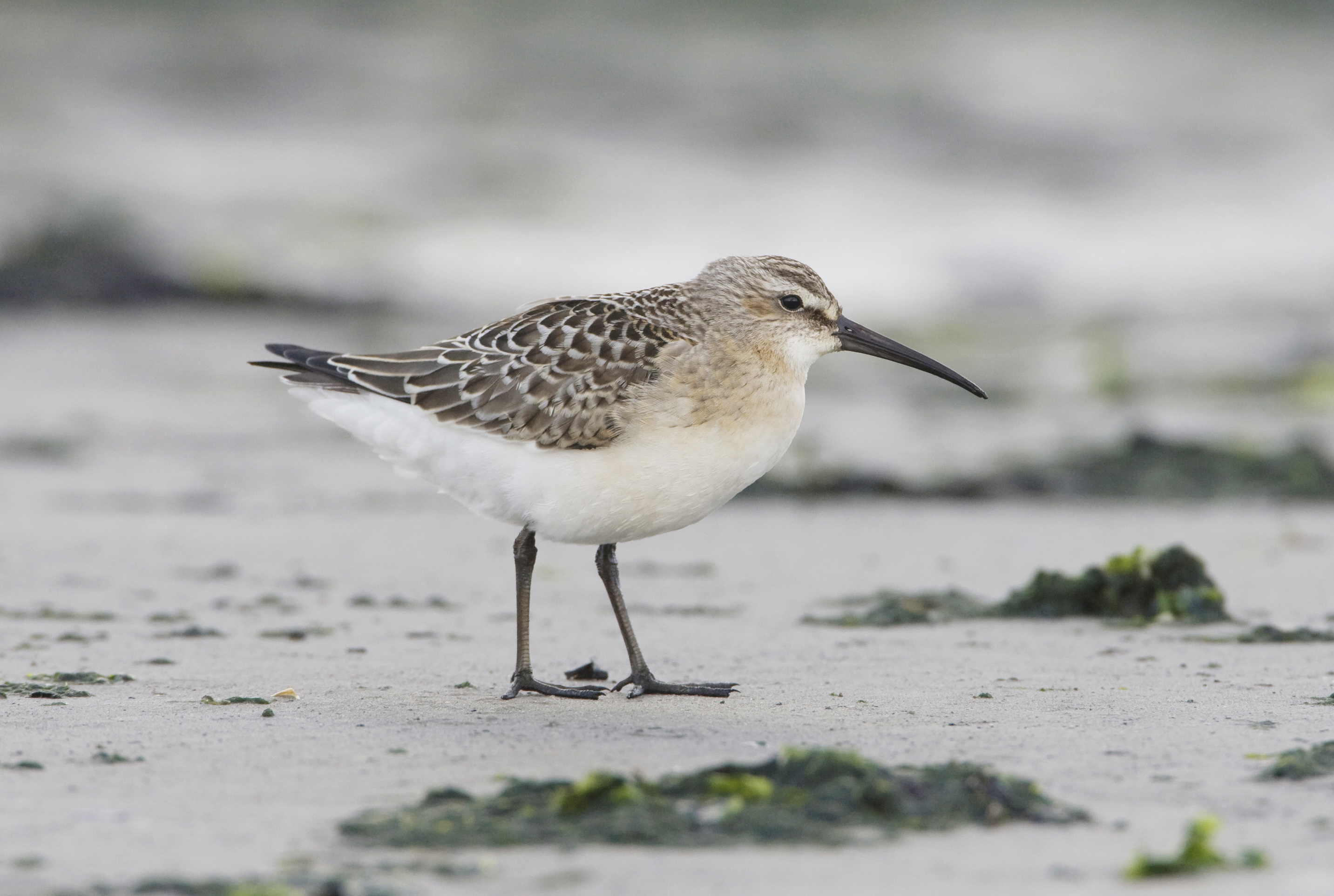 Juvenile Curlew Sandpiper (Terschelling, The Netherlands, 1 September 2008). In this beautiful portrait, note the elegant proportions created by the long, slim, fine-tipped bill and the slight primary projection beyond the tail-tip creating a somewhat attenuated rear end. Equally striking is the crisp, frosty appearance to the whole of the upperparts, each feather having a neat whitish fringe. With no grey adult-type feathers yet appearing above, this bird is in full juvenile plumage. Note also that, in contrast with juvenile Dunlin, the underparts are a pure, clean white with just a peachy flush to the breast (Arie Ouwerkerk). 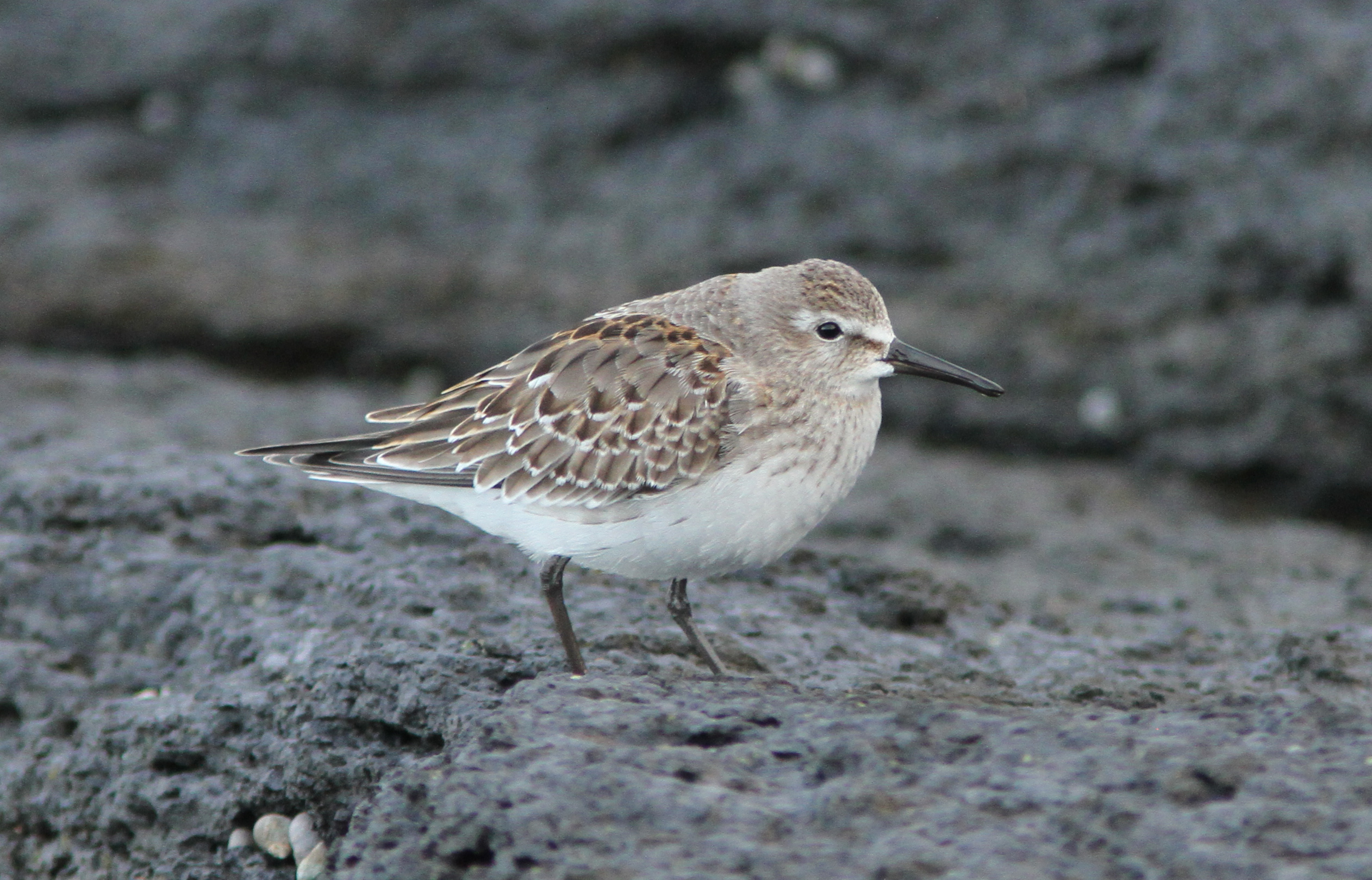 Juvenile White-rumped Sandpiper (São Miguel, Azores, 10 October 2012). The relatively stumpy bill, shortish legs and very long rear end with the primary tips extending well beyond both the tail-tip and the tertials identify this as a White-rumped Sandpiper. The crisply patterned wing feathers age it as a juvenile but, as with the Dunlin in image 2, the moult to first-winter plumage is well under way, with most of the rusty-fringed mantle and scapular feathers already replaced with dull grey adult-type feathers. Also visible here is fine streaking in the upper flanks – a typical character of White-rumped Sandpiper at all ages (Dominic Mitchell / www.birdingetc.com). 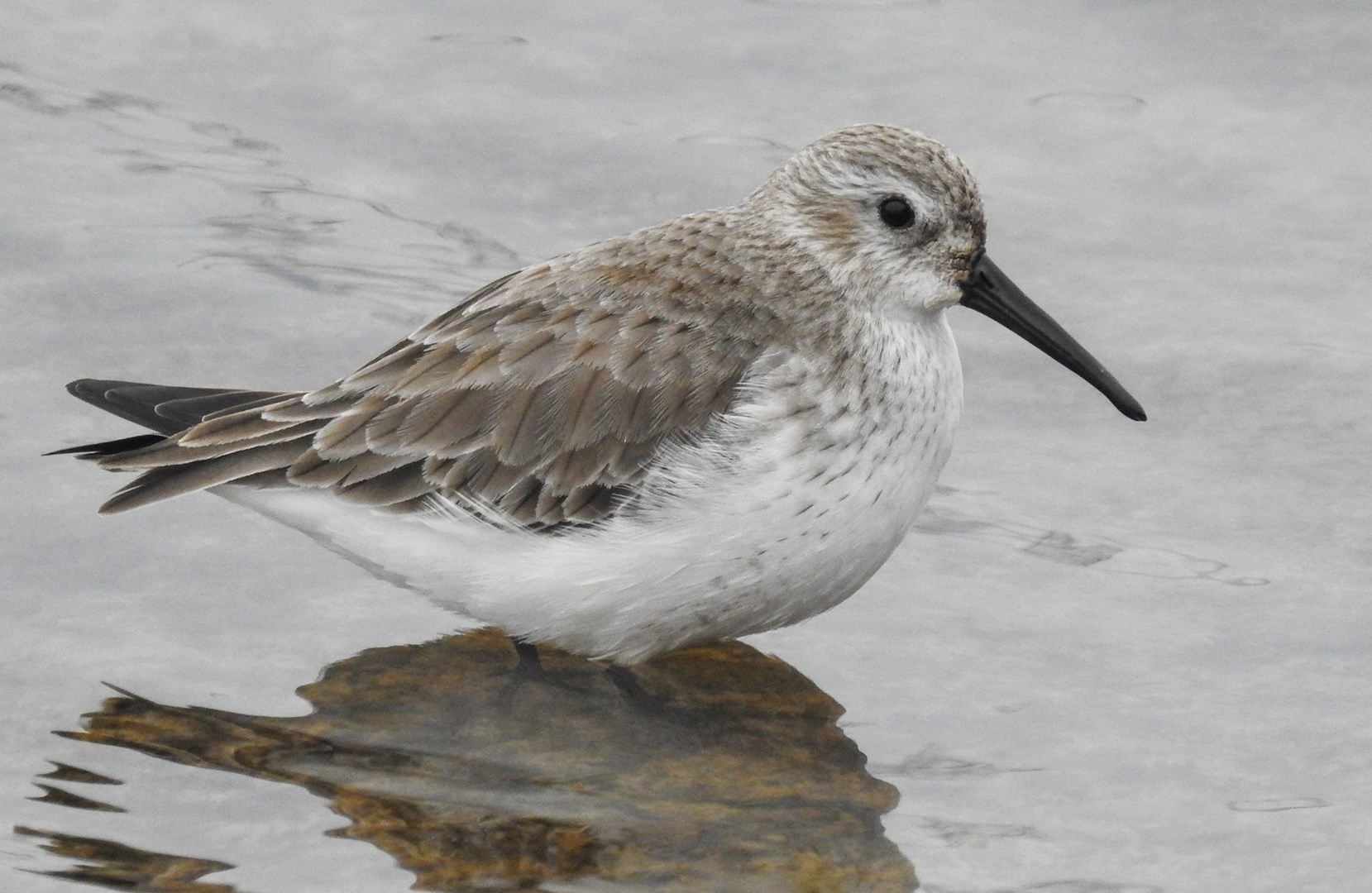 Adult winter Dunlin (Elton Reservoir, Greater Manchester, 4 March 2018). This bird shows the species' typical dumpy, rotund and neckless outline. It is an adult nearing the start of the moult from its characteristically rather plain greyish winter plumage, with some traces of its summer finery seen in the rusty hues in the crown sides and ear coverts, and also in the orange tips a few upper scapulars (Martin Loftus). 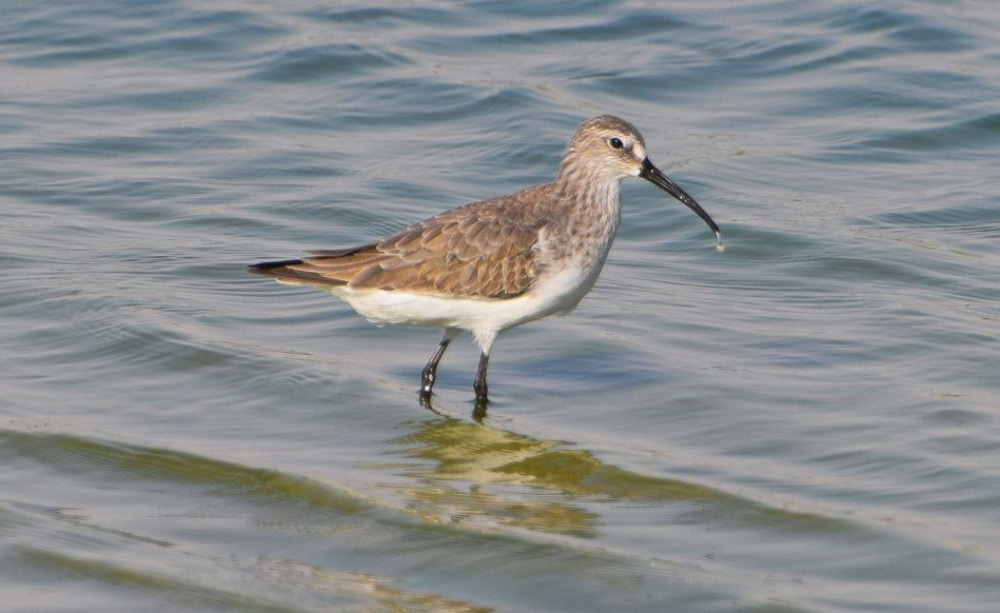 Adult winter Curlew Sandpiper (Al Qudra, UAE, 27 October 2016). This individual is in full winter plumage. Although looking essentially plain grey and somewhat featureless, it is still separable from Dunlin even without a flight view. Very obvious here are its slim, fine-tipped bill, slightly attenuated rear end and long legs with plenty of exposed tibia. Most Curlew Sandpipers seen in Britain are summer plumage adults in early autumn and juveniles in mid-autumn, so birds like this are most likely to be encountered on a winter foreign holiday (John Johnston). 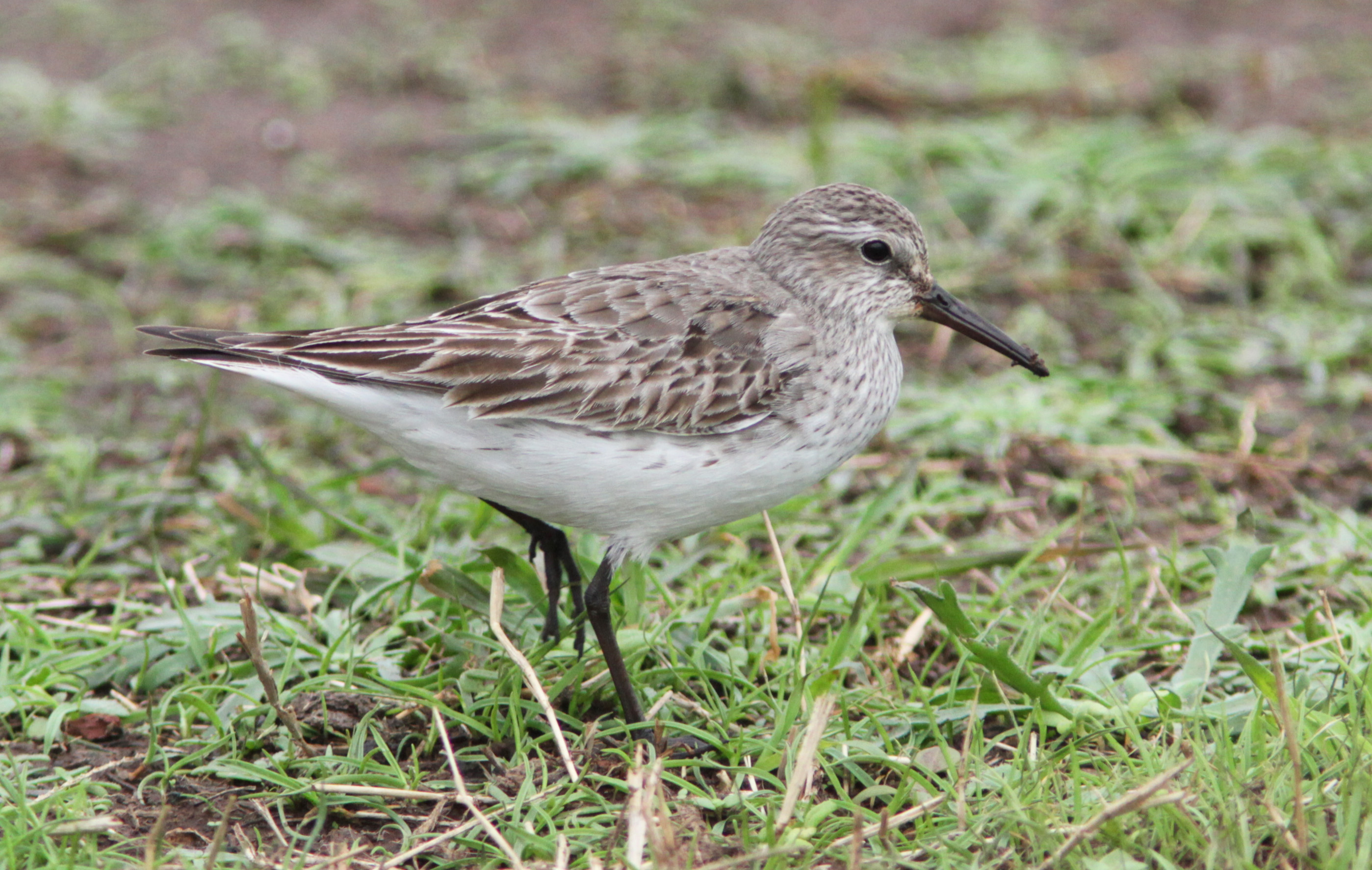 Adult White-rumped Sandpiper (Flores, Azores, 14 October 2013). The really long primary projection is the most immediately striking feature of this bird, extending noticeably beyond the tail-tip and especially so beyond the tip of the longest tertial. The shortish legs and short bill add further confirmation that this is a White-rumped Sandpiper. Once moulted into winter plumage, autumn adults are typically, as here, a rather dull and uniform grey, but note the presence of fine streaking in the upper flanks leading back from the breast streaking – a pattern never shown by either Dunlin or Curlew Sandpiper (Dominic Mitchell / www.birdingetc.com). 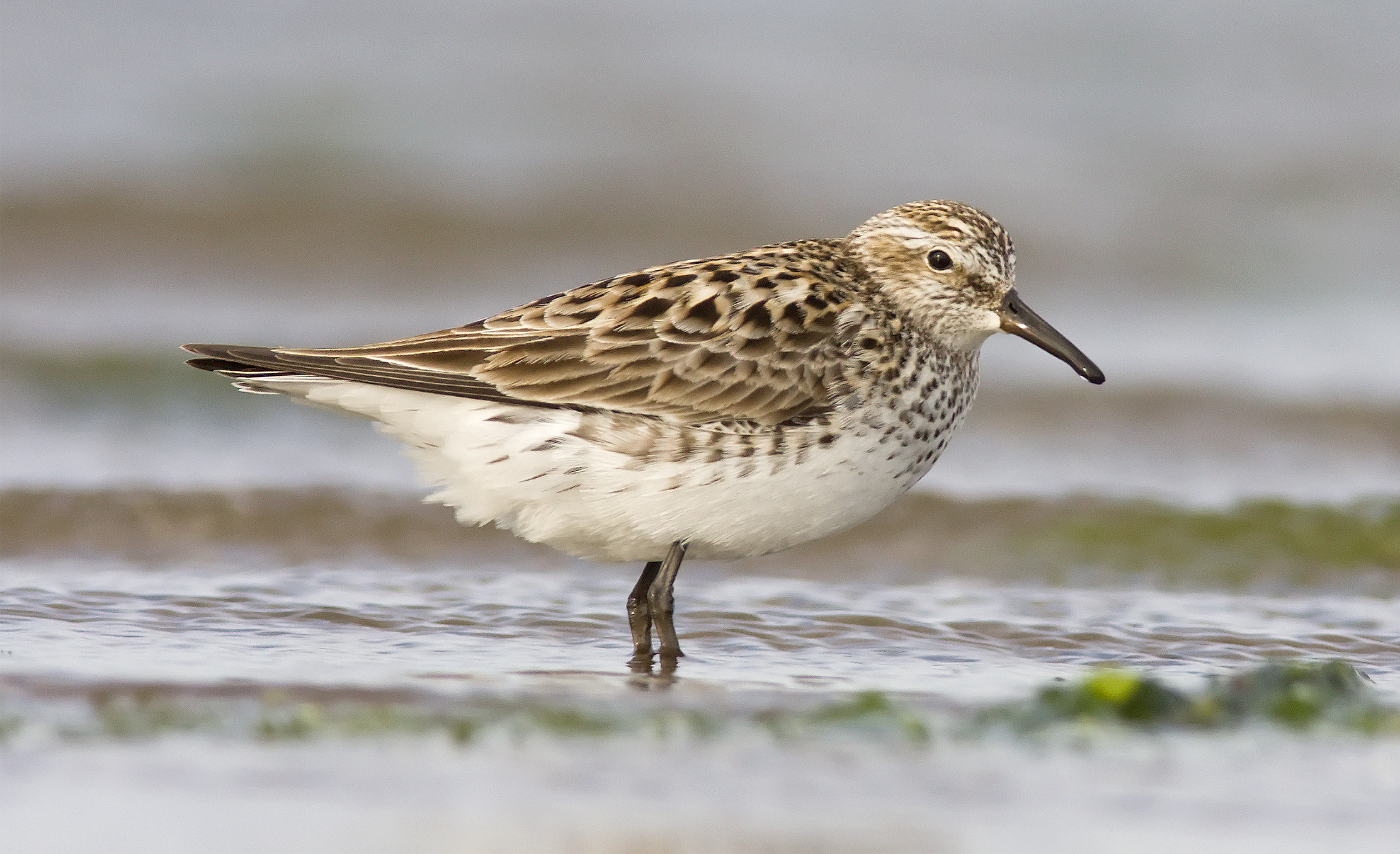 Adult White-rumped Sandpiper (Connecticut, USA, 4 July 2011). Even in breeding plumage this species is a relatively subdued creature, but there are subtle rusty hues here in the crown and ear coverts and also in the fringes to the mantle and scapular feathers. Perhaps most obvious yet again is the fine streaking in the flanks on this individual, extending to the rear flanks as well. Confirmation of this bird's identity is provided by the shortish bill and, most importantly, by the long primary projection giving the typically strongly attenuated rear end (Julian Hough). 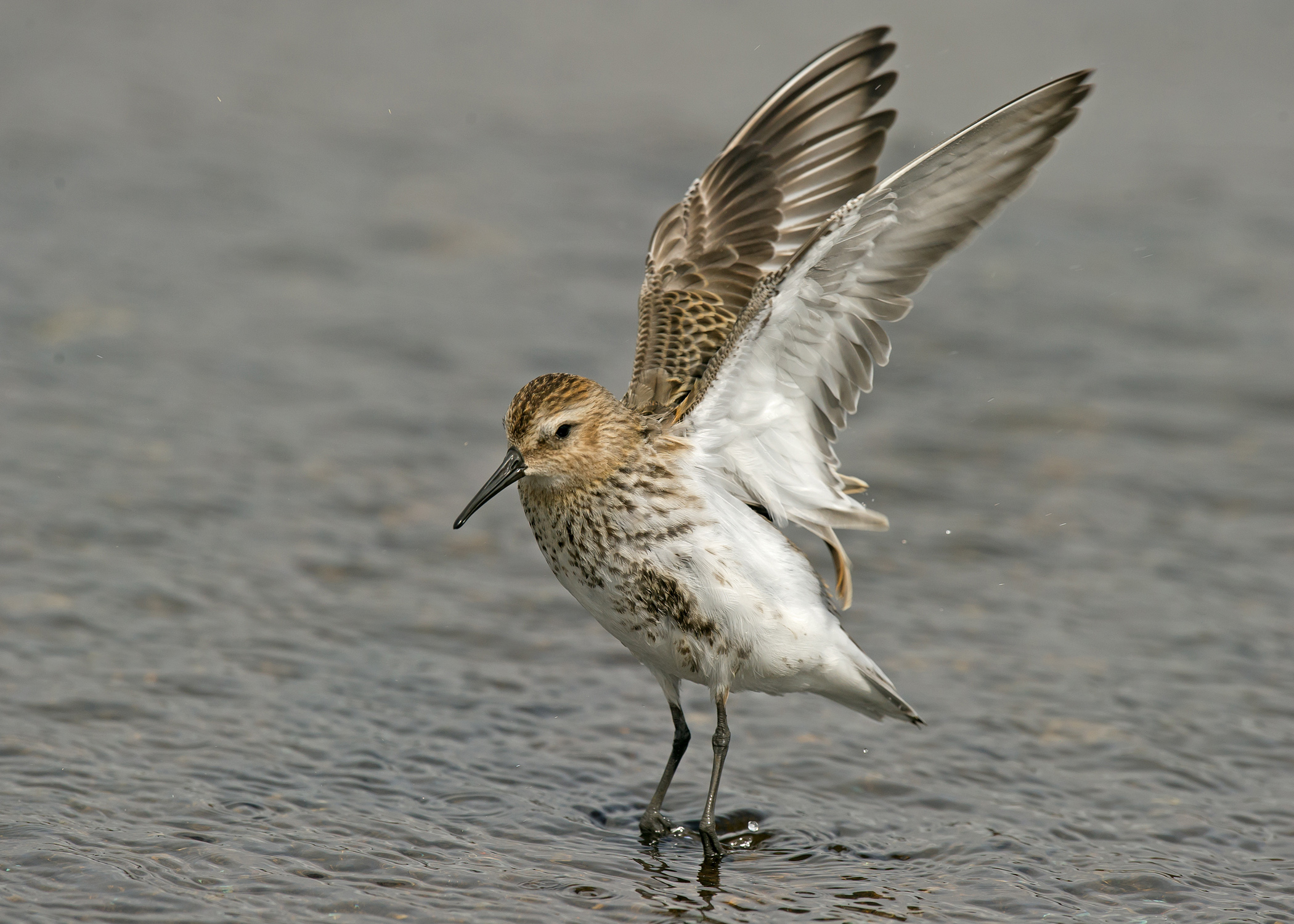 Juvenile Dunlin (Seaforth, Lancashire, 28 August 2010). The warm buff plumage hues, crisp fringes to the wing coverts and prominent blurry blackish spotting in the underparts are sufficient to identify this bird as a young Dunlin. Its dumpy, unremarkable proportions are also evident here. It would, however, need to turn around a little to reveal the prominent dark centre to its rump and uppertail coverts – a feature common to most small calidrids, but not to either of the two confusion species discussed here (Steve Young / www.birdsonfilm.com).

Juvenile Curlew Sandpiper (Cuckmere, East Sussex, 10 September 2012). This 'wings up' Curlew Sandpiper is showing off its characteristic white rump. Typically, this patch is quite extensive, covering both the lower rump and the uppertail coverts, and it appears in flight as a large square patch. The longish, fine-tipped bill adds further confirmation of its identity, while the peachy flush to the breast and the just-visible scaly-looking upper mantle identify it as a fresh autumn juvenile (Peter Wilson). 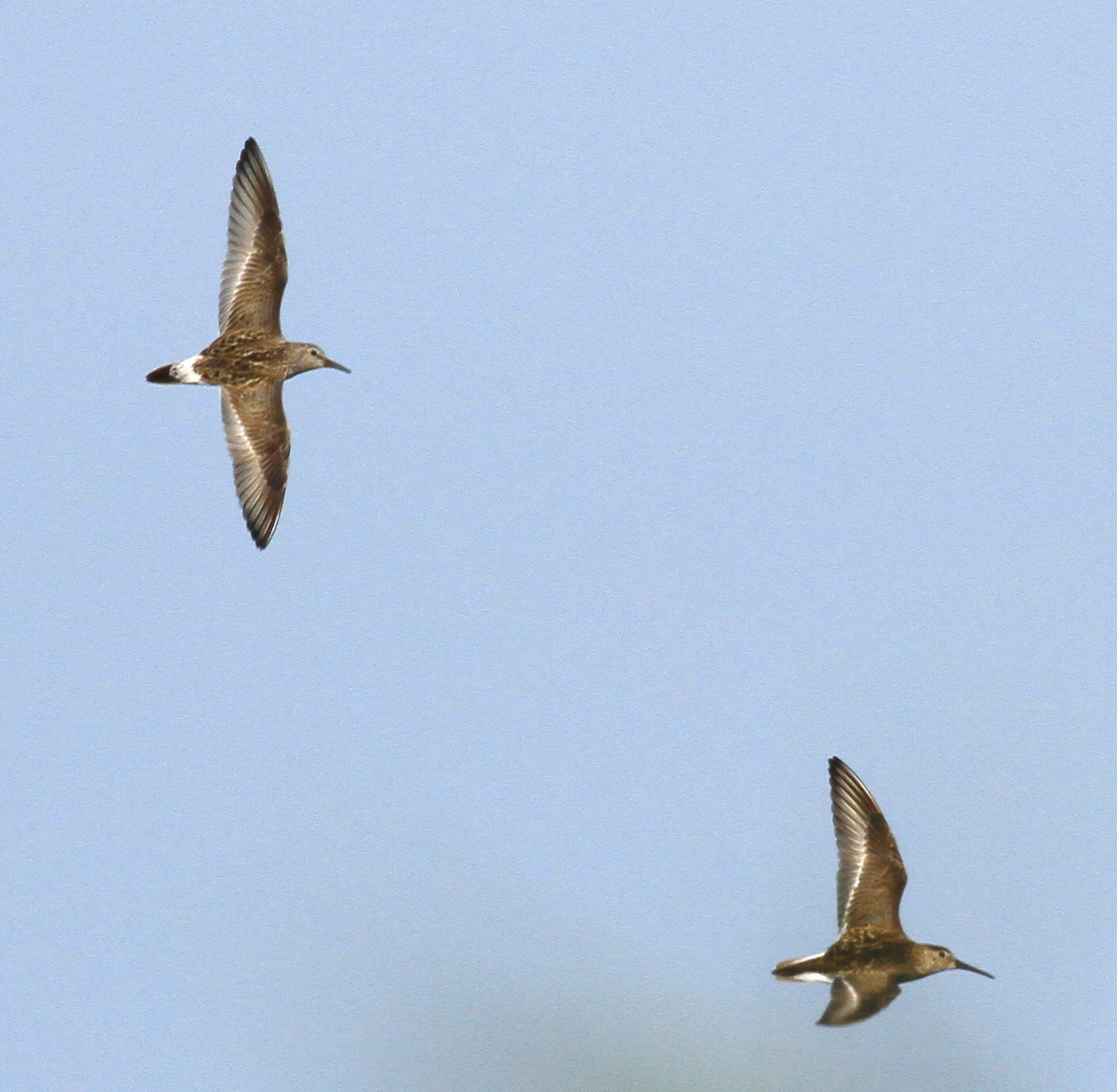 White-rumped Sandpiper (left) and Dunlin (Lodmoor, Dorset, 17 July 2013). These two species can look remarkably similar, but note the former's rather short-looking bill, slightly weak-looking wing-bar and, most obviously, a narrow white 'rump' – actually restricted to a white 'horseshoe' across the uppertail coverts, which contrasts sharply with a rather 'stuck-on'-looking dark tail (Brett Spencer). 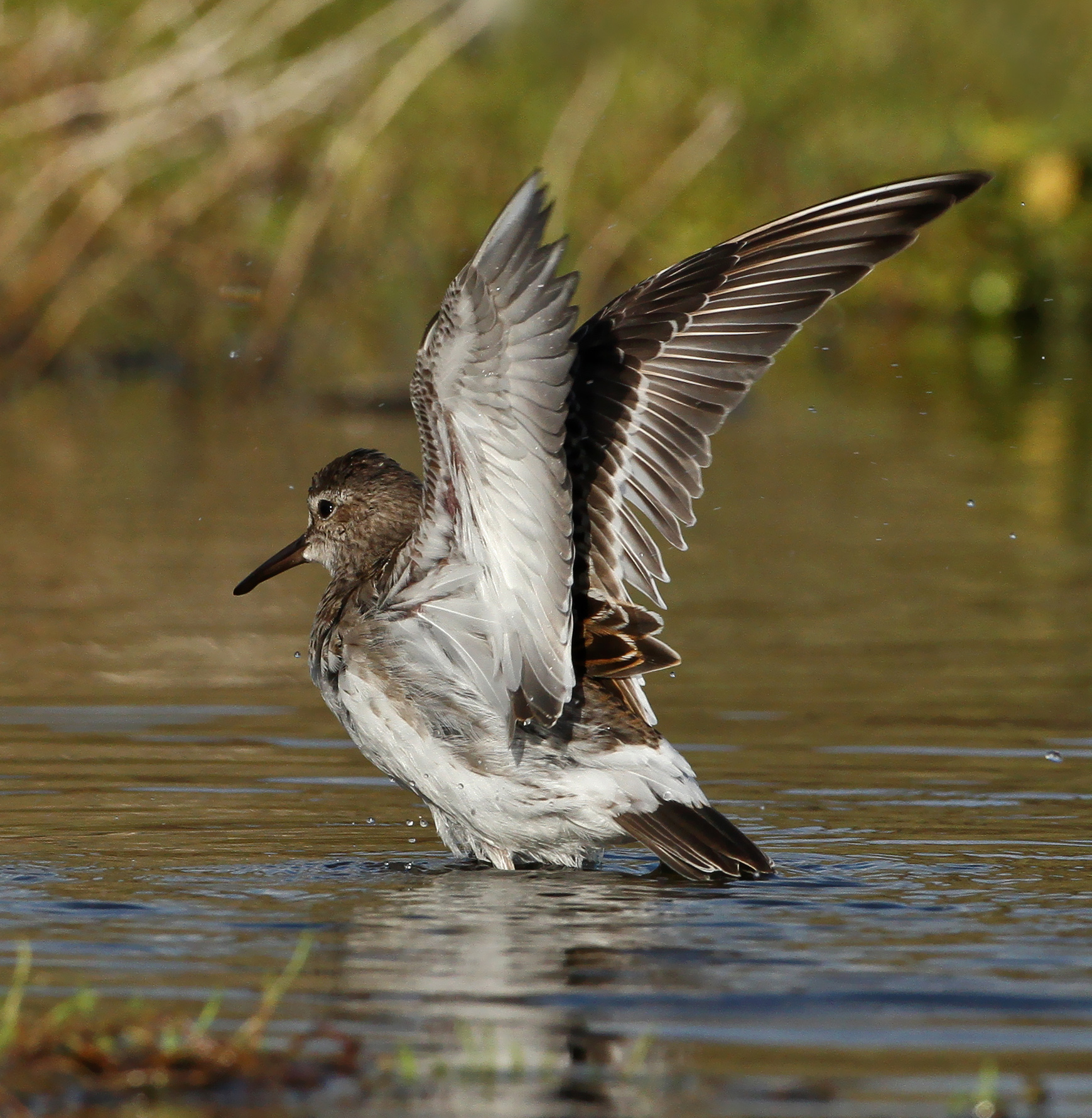 Juvenile White-rumped Sandpiper (Terceira, Azores, 21 October 2012). This individual is showing off its rear to better effect. Note that the rump itself is actually dark and that it is only the uppertail coverts which are white. The resultant white 'band' therefore sits across the base of the tail and contrasts very sharply with the blackish tail-feathers. A short-looking bill and rather weak upperwing bar are also visible here (Stefan Pfutzke).