Seldom does an inland birder find themselves presented with a chance to upgrade their deprived patch for a coastal bird observatory, but I was fortunate enough to be able to seize just such an opportunity this year. On Monday 7 March, I packed up my kit bag with everything that I imagined an Assistant Warden would need each day, from identification handbooks to a brimming cache of chocolate biscuits, and hit the road to Dungeness. The journey was interrupted just two miles in, though, as I broke up with my dear home patch on the best possible terms by twitching its first ever Dartford Warbler.

Dungeness Bird Observatory's headquarters are the end terrace of RNSSS Cottages, just north of the famous power station and fairly near the much more charming Old Lighthouse. It was founded in 1952, maintaining an exhaustive record of birds and other wildlife groups ever since, providing the scene for countless spectacular falls and celebrated rarities, most recently Britain's first Acadian Flycatcher last September, while this century has also witnessed three Audouin's Gulls, Dark-eyed Junco, Crested Lark, Short-toed Treecreeper and Trumpeter Finch to name but a few. 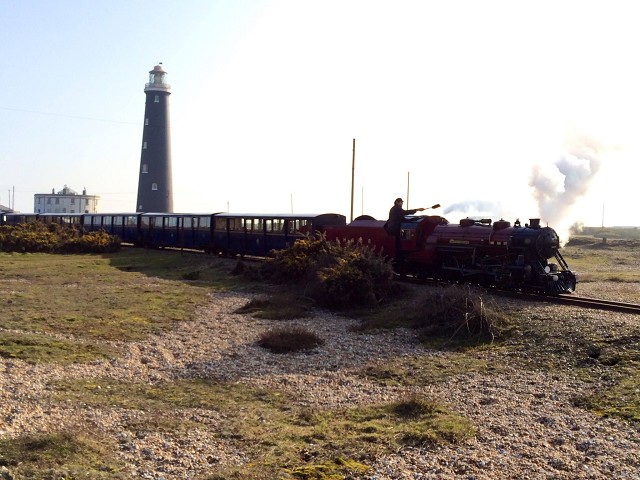 It was just two sleeps before my first red-letter day, though my notebook pages were cast a smoky blue after wrestling against a south-easterly gale into the seawatching hide where a count of 415 Fulmars included no fewer than 17 blue morphs, a staggering total on the south coast. Seawatching resolved to be the order of the day for most of the following couple of weeks, the flow of birds offshore sustained by the passage of Red-throated Divers, Common Scoters, Gannets and auks as well as a panoply of waders and wildfowl. Loose dark strands progressing steadily across the horizon consisted of Dark-bellied Brent Geese and became a routine component of the avian traffic as the month wore on, and the occasional Common Eider, Red-breasted Merganser or Velvet Scoter added to the trickle of commoner ducks. It was a seawatch on 16 March that saw me add a new species to the observatory list, when three incongruous-looking Mandarin Ducks journeyed eastwards offshore. As great as it was to leave my mark on the local records, I must admit it felt a bit like having your raffle ticket called only to be presented with a coconut; hopefully I haven't used up my chance to add something of higher calibre! 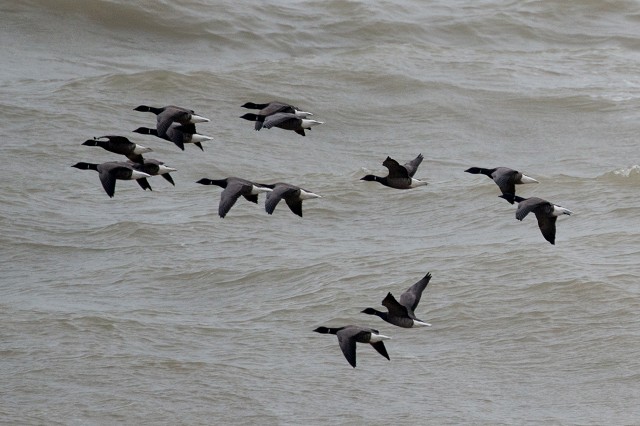 Birding the shingle and the bushes had its moments, too, with a number of Woodcocks inadvertently put up during my meandering treks around the peninsula, as was a Jack Snipe a couple of times, in addition to the odd Brambling among a steady passage of finches and a scattering of Black Redstarts. In recompense for the admittedly tardy showing of Northern Wheatears, the end of the month instead treated us to an unforeseen deluge of Firecrests on a southerly airflow. There had been just a handful on site most days but this swelled to 25 on 24th, a good spring total in itself, but this seemed paltry when together we reached the precise and mighty total of 101 just two days later. Numbers gradually fizzled out again over the following couple of days but were suitably replenished when I was away on 30th, with 120 Firecrests on the observatory recording area, smashing the all-time spring record for the second time in four days. Around the same time we experienced our first small waves of Chiffchaffs. It is said that Dungeness will in time deliver unmatched and unforgettable birding experiences and plodding through broom set alight by the piercing calls of these minute glowing treasures has certainly been seared into my memory. 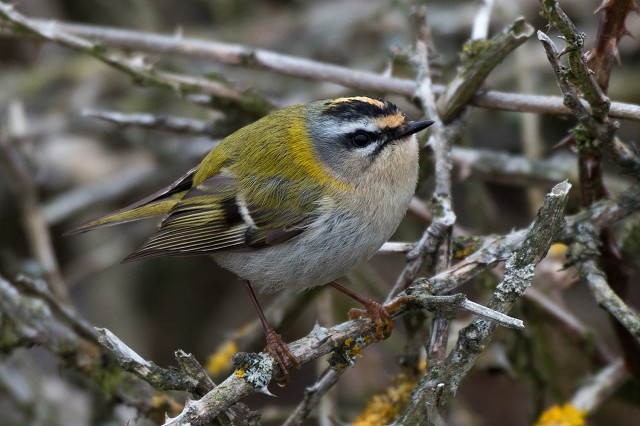 Dungeness is famed for its larids and I managed to catch the last dregs of the gull-watching season, picking up second-winters of Caspian and Yellow-legged Gulls on 19th and 25th, and being in the seawatching hide when a juvenile Iceland Gull floated by on 26th. The hide brought further promise towards the month's end with Sandwich Terns establishing themselves as part of the offshore scenery and the first Arctic Skuas of the year on 26th.

April was kicked off by the return of the juvenile Iceland Gull, which was feeding at The Patch, the fish-infused warm water outflow from the nuclear power station which draws in gulls and terns in their hordes. On the same day, I finally caught up with nominate ater Coal Tits, having the opportunity to ring a couple, a new taxon for me. Hours put in at the seawatching hide equalled interesting birds out, with Velvet Scoter, Eider and Manx Shearwater logged along with continued passage of Dark-bellied Brent Geese and a trickle of Little Gulls, Arctic and Great Skuas. An array of waders were thrown into the mix, predominantly involving Whimbrel and Bar-tailed Godwit. Sightings of Black-throated and Great Northern Diver were also good value and the first two Black Terns made the most of The Patch on 16th, five and six days after my first Little and Arctic Terns flicked eastward among streams of Sandwich and Common Terns. Another, more richly coloured, juvenile Iceland Gull made a frustrating fleeting appearance during a seawatch on 11th, but trumping all of these maritime delights was a Hooded Crow which I picked up as it flew west with two Carrion Crows low to the surface about a kilometre offshore on 7th. What was conservatively treated as the same bird appeared on the shingle near the active lighthouse later in the morning.

Over the course of the month I refined and eventually settled upon a default route on land which would lead me traversing across up to nine miles of shingle, depending on how much zigzagging I ended up doing, which was largely determined by the apparent number of grounded migrants around. This is a great work out for the calf muscles but most of the peninsula is actually an easier walk than one might expect, with firm terrain in many of the key areas. I aim to cover as much of the observatory recording area as I can each day, checking the Point and the beach, where chats and other freshly arrived passerines often lurk in shallow dips and sparse vegetation, proceeding to the low open area known as The Desert before scouring the jungle that is the Trapping Area and finally the Long Pits and their surrounding bushes and scrub. 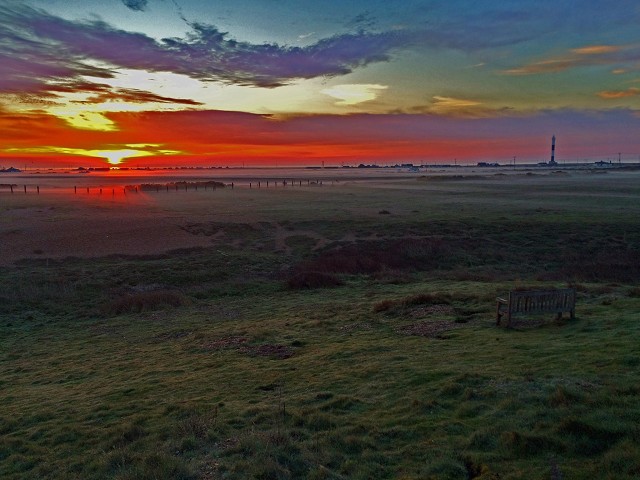 By the end of month, the roll call of summer migrants was largely complete, with Willow Warblers and Blackcaps to a reasonable level early on and personal first dates of 8th for Common Whitethroat, 13th for Lesser Whitethroat, 20th for Reed Warbler and 27th for Garden Warbler. I dug out a Ring Ouzel on 13th — their resonant alarm call and glistening silvery wings became a regular feature over the rest of the month, peaking at four on 16th. I managed to catch up with a tidy male Pied Flycatcher that a regular birder had found along a dappled wooded path on 10th, the same day as my first Common Redstart of the year. Yellow Wagtails first whistled over my head on 14th, Swallows shot through (but other hirundines were surprisingly scarce) and a Hobby followed in their wake on 25th; I added Common Swift two days later and a light sprinkling of Northern Wheatears kept spirits up throughout. 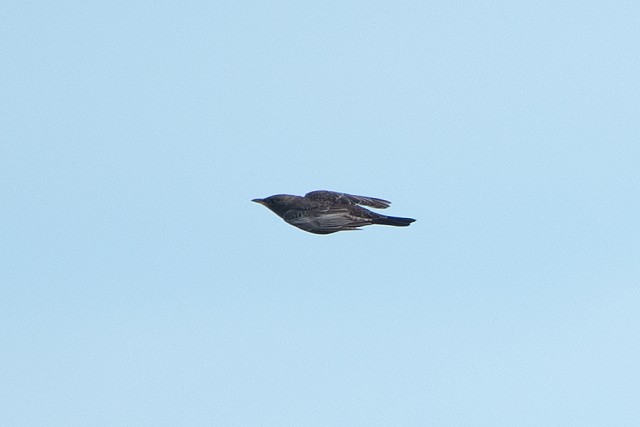 The silvery wings of Ring Ouzel were a regular sight in April after David's first on 13th (Photo: David Campbell)

As April drew to a close, the Dungeness faithful looked ahead to the mega month of May, when it is all about Pomarine Skuas offshore and the boosted chance of something serious materialising in the bushes or flying over. Top-notch birding never stops at Dungeness, with something to see at any time of year. The observatory is the perfect place to stay for a few days' birding and its recording area is fantastic for seawatching and passage migrants, while other nearby sites lend extra excitement. My forays over to the RSPB reserve so far have added Wood Warbler, Spoonbill and Tundra Bean Goose to my year list alongside its flagship visitors such as Smew and scarce grebes, and breeding species with Marsh Harrier, Bittern and Bearded Tit, among many others. Staying at the observatory is an affordable, comfortable and exciting way to explore the area: the obs is fully equipped and boasts comfortable accommodation for up to nine visitors at any time. You can find out more at www.dungenessbirdobs.org.uk.