Habitat destruction and the effects of climate change are threatening the survival of a third of Britain's dragonfly species. Data collected by the British Dragonfly Society show 36% of the 39 dragonfly species are in decline.

The BDS has launched a nationwide survey to find out exactly where our dragonflies are living and how well they are coping with the threats they face. The five-year Dragonflies in Focus project includes the production of a new atlas which will give a snapshot of the current locations of Britain's dragonflies. Changes in agriculture mean there are fewer ponds which were used to water livestock. These ponds were good habitat for dragonflies, making the garden pond now an extremely important place for the survival of some of our dragonfly species. It's not all doom and gloom as when the last atlas was published in 1996, the Small Red-eyed Damselfly had never been seen in the UK. It now has breeding colonies from Devon to Norfolk and has been seen as far away as Yorkshire. The new atlas will document how the distribution of species is expanding or contracting. 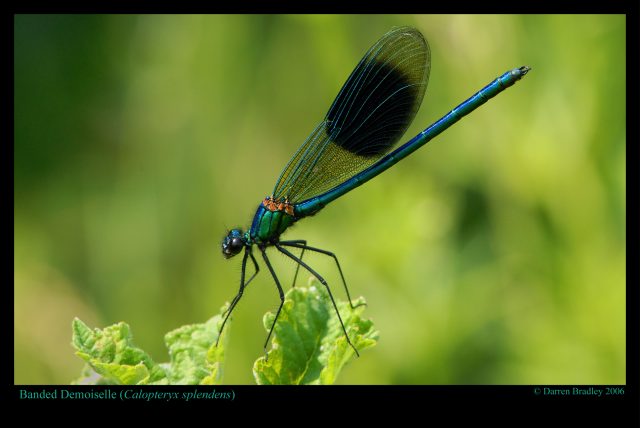 Many of the endangered species are found in Scotland and it appears the majority of species are on the move. BDS Conservation Officer Katharine Parkes says: "They have survived the extinction of the dinosaurs and several ice ages...but can dragonflies survive the increasing pressures imposed by mankind?"

"Understanding where and how quickly our dragonflies are moving will help us to plan for the future, with particular regard to the way in which conservation is carried out - it will be very important to make sure we are providing our wildlife with the best opportunities to react to changes. They are temperature-sensitive, making them useful for climate change impact studies."

The information collected will be used to make conservation decisions, to monitor endangered species and to help them recover. Records of breeding activity are of particular importance for identifying key sites for dragonflies. Already experts know dragonflies are increasingly heading to Britain from Europe and even North America. Also new species of fish introduced into ponds and lakes are threatening the future of Britain's dragonflies. The non-native fish feed on the dragonfly larvae, which spend up to a year developing under water.

How to get involved

Anyone can get involved; look for dragonflies near water on a sunny day from late April to October. Interested nature-lovers can help by recording the activity of dragonflies in their neighbourhood. Details of training sessions and full details of what to do are available on the BDS website www.dragonflysoc.org.uk.

There are five key pieces of information to make a good record. These are the species observed, the site location, Ordnance Survey grid reference, the date and the recorder's name/contact details. Additionally the numbers observed would be extremely useful. Details of how to send in your records are on the BDS website.

All the data collected will be used as a baseline to monitor changes, which may be due to pollution, climate change, habitat loss or competition. Send your records to your local County Dragonfly Recorder whose details are on the website www.dragonflysoc.org.uk. 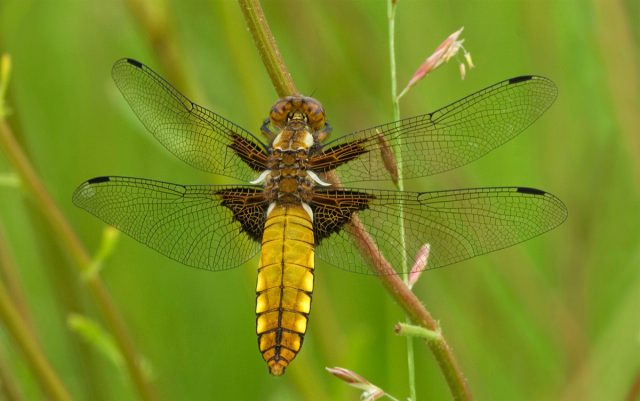 Dragonflies and damselflies belong to the insect order Odonata, which means 'toothed jaws', and are often collectively referred to as 'dragonflies' but there are actually two subgroups.

Damselflies are in the sub-order Zygoptera (meaning "paired-wings"). All four wings are near enough equal in size and shape. They are usually small, weakly flying insects that stay close to the water margins or water surface. When at rest, most species hold their wings along the length of their abdomen. The eyes are always separated, never touching.

The true dragonflies are in the sub-order Anisoptera (meaning "unequal-winged"). Their hind wings are usually shorter and broader than the forewings. They are usually large, strongly flying insects which can often be found flying well away from water. When at rest, they hold their wings out from the body, often at right angles to it. The eyes are very large and usually touch, at least at a point.

The life cycle of the dragonfly

As much as 95% of the life cycle of a dragonfly is spent under water. The females lay eggs in or near water which usually hatch after a few weeks although the eggs of some species lie dormant over winter. The hatched larvae feed on live prey including small fish which may be larger than themselves. As the larvae grow they cast their skins up to 15 times. When the water warms up and the day length gets longer the fully grown larvae climb up marginal vegetation or out onto a bank and cast their skin to emerge as an adult. The newly emerged dragonfly takes a while to pump fluid into the wings and abdomen. It can take several hours for the wings to harden before it can take its maiden flight, find a mate and start the cycle all over again. 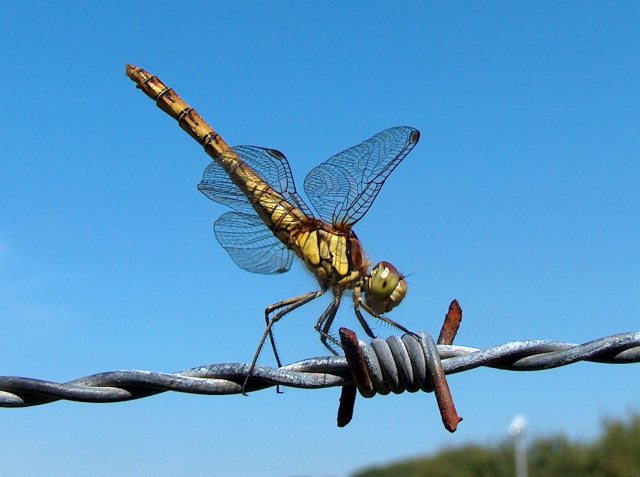 Founded in 1983 and celebrating its 25th anniversary this year, the British Dragonfly Society (BDS) is a Registered Charity (number 800196). Its aim is to encourage and support the study and conservation of dragonflies in the UK and further afield. 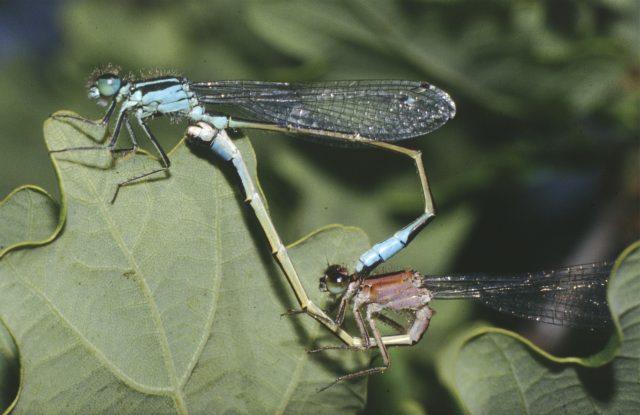 The BDS also run a single species online survey, which is a great way for people to get started. The target species this year is the Blue-tailed Damselfly Ischnura elegans. It should be a common species and can live in a wide range of habitats, but records have shown a decline in recent years. This could be due to a range of factors, including habitat loss, or introduction of non-native fish to the larval home, for example. So we need as many people as possible to report sightings, preferably with a photo attached, and basic information about what day they saw it, where they were, and approximately how many they saw. Their flight season began towards the end of May. The website with information on how to identify the Blue-tailed Damselfly is accessible via the BDS website at www.dragonflysoc.org.uk.

The BDS hold field meetings with experienced leaders all over the country, and other training events to introduce our favourite insects to the general public. In 2008 a wide range of BDS events are taking place around the country for our members and friends to attend. See the What's On page on the BDS website www.dragonflysoc.org.uk.