For many years in the Eighties and Nineties, bird racing was a highlight of the UK birding calendar. For those unfamiliar with the concept, it involves teams of four charging around their home counties for up to 24 hours logging as many species as possible and, with luck, setting new county records. Such was its popularity that bird racing developed into a national event every May, ultimately co-ordinated by this magazine in partnership with BirdLife International, and fundraising for conservation became an important element.

Its popularity eventually waned, but memories of race days came flooding back when a new event made its debut this autumn. Global Bird Weekend, which ran on 17-18 October, set out to be the biggest birding weekend on record, mobilising birders across the world to log as many species as possible over the two days. Founded by Tim Appleton MBE and organised in partnership with BirdLife International, Swarovski Optik and eBird, it also set the important goal of fundraising for BirdLife's appeal to end illegal bird trade.

I was part of the BirdLife Species Champions team, which had members spread around the world. Distance was no barrier: we would all participate locally. With fundraising underway well ahead of the weekend, team communications organised and logistics in place, the air of anticipation prior to the event was heightened in the UK by a strong easterly airstream over the North Sea – team captain Jim Lawrence and I were both taking part in Norfolk. 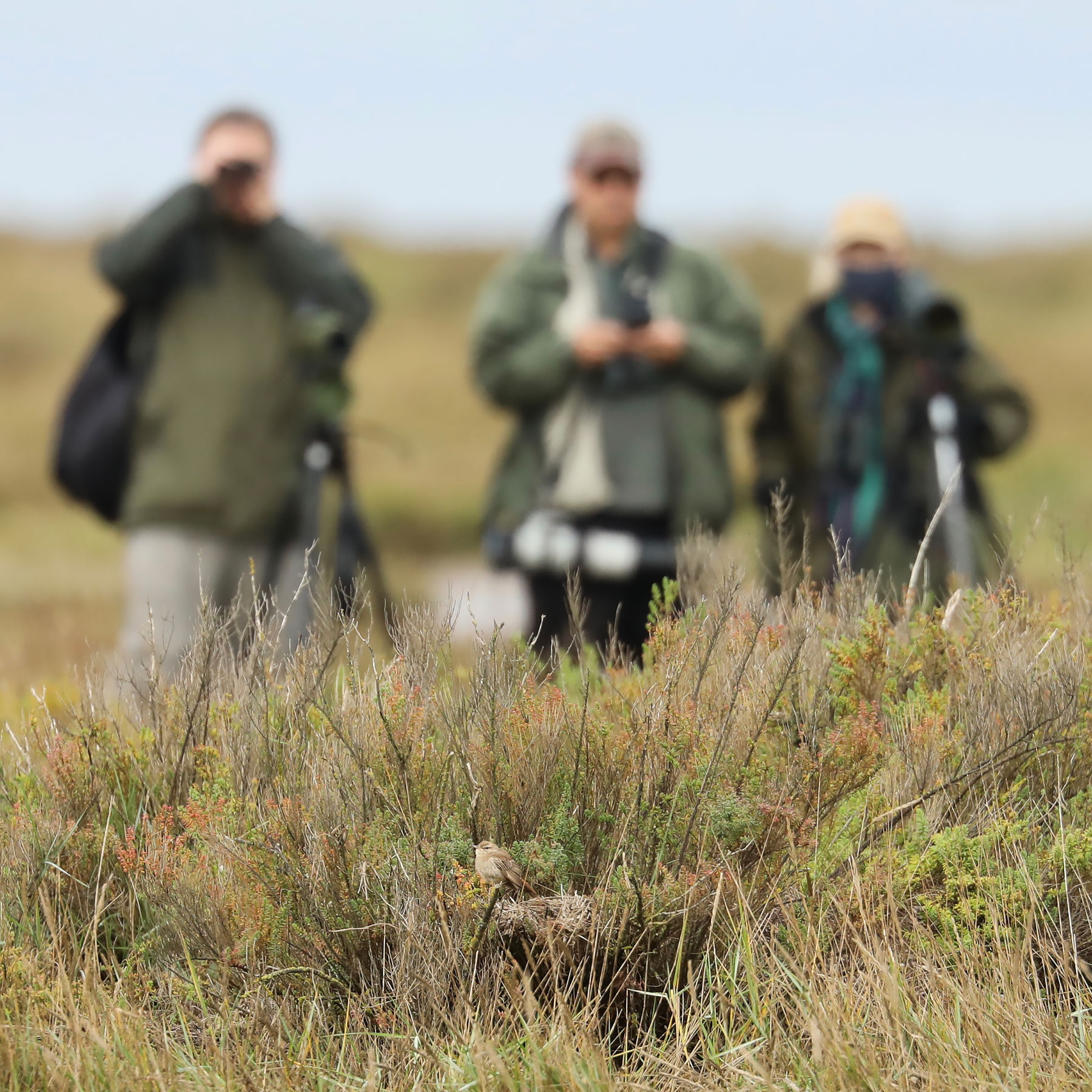 The first appearance of the species in Britain for 40 years meant that this Rufous-tailed Scrub Robin at Stiffkey in Norfolk was undoubtedly the star of the show during the inaugural Global Bird Weekend (Dominic Mitchell).

As dawn broke on the Saturday morning, my day began well with a group of Eurasian Stone-curlews – a species by no means guaranteed in October. I was quickly en route again northwards, having settled on Stiffkey as a convenient midway point to start working the coast. It proved a fortuitous decision, as extraordinary news then broke of the first Rufous-tailed Scrub Robin in Britain for 40 years – at Stiffkey!

By the time I arrived on site the bird had decided to play hardball and flown out onto flooded saltmarsh out of sight. Jim was there too among a growing and anxious crowd, but eventually the tide receded enough for the search to restart. Fortunately, it was located again and everyone got views of this outrageous 'mega', which not only kickstarted our list in style but also made the national media.

Meanwhile, fellow team members as far afield as Scilly, Sweden, New York, India and Borneo were in the field and posting their news on our group chat, which helped instil a welcome sense of camaraderie in our uber-socially distanced team. Regardless of location and time zone, we were participating together.

Back in Norfolk, Jim, I and others continued our good run with a showy Pallas's Warbler and a jammy Barred Warbler, scoped at several hundred metres' range. I went to twitch a Yellow-browed Warbler and then found a second, before moving onto Holme where up to four Red-flanked Bluetails proved to be another major pleaser for the crowds as my day drew to a close.

The first Global Bird Weekend had delivered, and then some. The highs we experienced in Norfolk were replicated around the world, with an extraordinary 38,000 people taking part in 169 countries on seven continents, all with their own stories to tell. On that first day 7,097 bird species were logged, a new one-day world record, with another 180 species the following day taking the total weekend count to 7,276 species – bird racing on a truly epic scale.

With a total of 766 species logged on the Saturday the BirdLife Species Champions finished third in the international team rankings. But it is the fundraising statistic that is the most important: in total Global Bird Weekend raised almost £23,000 towards BirdLife's work to end illegal bird trade. That surely makes birds the winners.