If you have travelled to watch birds, chances are you will have a few tales to tell – not just of memorable species, places and people, but of the things they don't put in the travel brochures. For me, especially during my early forays to the Mediterranean, this mainly seemed to take the form of brushes with the authorities.

Back in June 1985, for example, I went to Greece with a friend and with little more than binoculars, telescopes and return tickets to Thessaloniki. Within an hour of landing, as my friend had predicted, we ticked off our first lifer: Black-headed Bunting. Within two hours of arrival, as neither of us had anticipated, we were detained by the army, held in a guard room and given a dressing down. Our crime? Birding around interesting 'habitat' which proved to be the edge of an army camp. Knowing that British plane spotters have since been jailed in Greece for similar activities, we had a narrow escape.

Learning little from this episode, we later scoped a Masked Shrike on a tree-top which turned out to be hiding another army lookout post. Fortunately, the bird remained on its perch, and we showed it to the soldiers who challenged us, together with the field guide illustration and our notebooks, eventually convincing them that we were not up to mischief.

In Tunisia I was briefly detained along with a Dutch birder because we had dared to photograph Rock Sparrows at a Roman ruin. On another trip, the police at a Moroccan fishing port took exception to me photographing gulls, and initially refused to believe that's what I would be doing on holiday in the country (as did some of my birding mates).

Even having official dispensation isn't always enough. On a trip organised by the Jordanian government, I was among a group of birding journalists and tour leaders whose optical and photographic gear was briefly confiscated at Amman airport. No matter our official invitation and government chaperone – no visitors needed such equipment, they said. After some heated exchanges we finally got our gear back, but apparently it was not an isolated incident and others haven't been so fortunate. 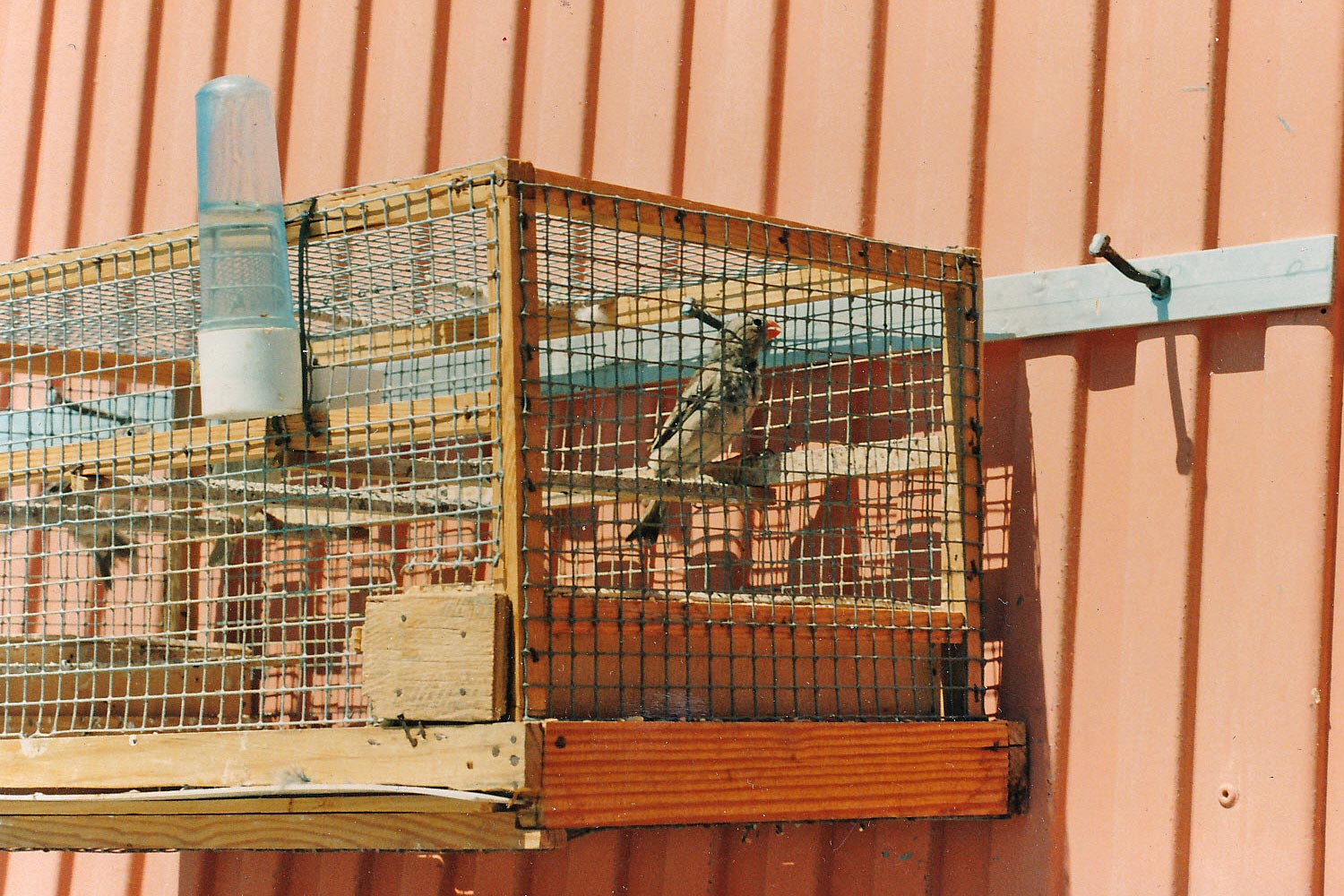 Jail bird – one of the Trumpeter Finches before it was 'sprung' from confinement (Dominic Mitchell).

Thankfully, when I did do something that might have merited police interest, I managed to get away with it. I had my reasons – hear me out.

On a trip to Spain in the mid-Nineties, a prime target was Trumpeter Finch, then numbering just 200-300 pairs. Together with my long-suffering wife Hazel, we set out to a known location for a morning's birding. Splitting up on arrival, I headed off on foot into the arid interior, where rock, semi-desert and parched, scrubby vegetation extended in every direction.

I covered the area thoroughly, but after a couple of hours could find no sign of the birds anywhere. Disappointed, I returned towards the car, but on nearing the road heard that distinctive nasal call – Trumpeter Finch! It seemed to be coming from a couple of buildings, and on closer approach I was staggered to find two cages with three Trumpeter Finches and some Goldfinches inside.

At that moment, a door opened and a woman emerged with some washing to hang out. She almost dropped it when she saw me, and I apologised and smiled, gesticulating with my camera as if to take photos of the birds – she nodded approval and went back inside.

Immediately, I opened the cages and shooed the birds back off into the wilds. And I was quickly off too, legging it back to the car before the alarm was raised. Hazel was already waiting and we were on the road in seconds – heading back past the buildings, outside which an angry mob had gathered around the empty cages. I floored the accelerator and sped away, detouring up a side road a few miles away in case anyone tried to follow.

Letting the birds go was surely the right thing to do, even if the locals felt otherwise. And I'm pleased to say I've been allowed back into Spain many times since.