As spring days go on the Norfolk coast, it had been no better than average. I'd amassed a decent total of species on my local patch, but seen nothing truly out of the ordinary – unsurprising given the chilly north-east wind. At least the sun was shining.

I got home, made a drink and joined my wife in the garden. We were watching a male Blackbird collecting food for its noisy fledgling when another slightly smaller bird appeared a short distance behind it. Backlit by bright sunlight, I couldn't make out any colours, but the size and posture immediately piqued my curiosity. Reaching for binoculars and squinting into the glare, the puzzle quickly resolved itself. Wryneck!

There are a few species, no matter the location, that always set the pulse racing through a combination of scarce status, aesthetic appeal and 'character' – there's something about their behaviour and demeanour that sets them apart. Wryneck is absolutely one of those species. It's always a good day when you see this woodpecker-like-no-other, even if you're somewhere in continental Europe where the species is still a relatively common breeder.

That was once its status in Britain – something hard to conceive now. This Wryneck had arrived inadvertently in a county where its ancestors were once a familiar sight. In neighbouring Suffolk in the late 19th century, the species was even considered the commonest woodpecker, and it still bred widely across lowland England at that time. 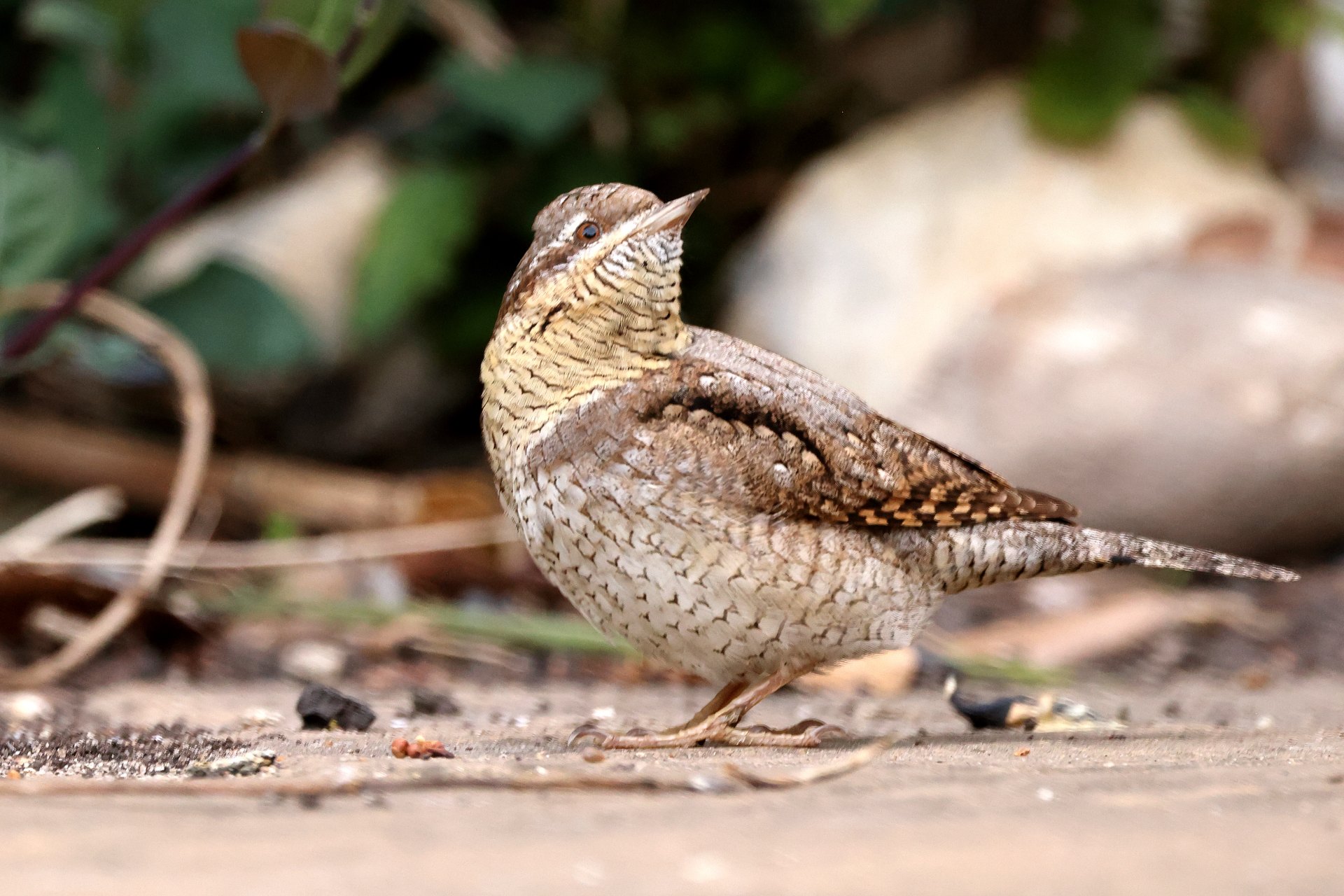 Wrynecks have long since retreated as a breeding species from Britain. As I watched this one hop into the apple tree and sit among the pink-and-white blossom, it felt like a glimpse back in time to a different age, when orchards across the country awaited the return of their Wrynecks in spring.

Time was short. We had arranged to go out within the hour, but I put the news out locally and, despite the bird vanishing for a while, a small crowd managed to see it in the nick of time.

Returning home in early evening, the Wryneck was waiting for us, sitting in full view halfway down the garden, catching some rays at the end of the day. We watched it come and go, foraging quietly in different corners of the garden. Amazingly, it flew onto the patio by the house, sat under my tripod briefly and then started hoovering up ants from a crevice between two paving slabs.

I've seen Wrynecks feeding before, but never quite so voraciously. Sensing an opportunity, I approached cautiously on foot at first, and then crawled along commando-style on my front. Occasionally the bird would look up and stare directly at me while digesting another mouthful of ants, but it seemed unfazed. It's quite something to meet the repeated gaze of a Wryneck at eye level, especially when you get to within about 12 feet.

After taking a series of images, I put my camera down to watch the bird and just soak up every detail of its extraordinary plumage – all those cryptic grey, brown and buff markings, the delicate arrowheads on its breast, bark-like barring on its tail, and darker lines through its eye and on the upperparts. Simply exquisite.

It brought to mind a past discussion about Wrynecks, and whether or not they can be aged in the field. This arose after the species appeared in three out of five autumns on my local patch at Alexandra Park in north London, always in the same area and in late August. A birder along the coast in Norfolk has also twice had Wryneck in his garden. Do individual birds use the same staging posts on migration in successive seasons?

It might sound far fetched, but probably no more so than three different Wrynecks turning up at exactly the same spot in a London park in five years. We will never know for sure, but one thing you can bet on is that I'll be keeping a sharp eye out in the garden this time next year.