DNA sequencing has revealed that one of Africa's least-known species may never have existed, despite its distinctive plumage.

Liberian Greenbul is one of the world’s most enigmatic species. Closely resembling the much more common Icterine Greenbul, it differs by having large white subterminal spots on all of its major flight feathers, along with smaller ones at the tips of its greater coverts and alula (forming a wing-bar), in addition to having a paler tail and a reddish-brown tinge to its wing. It is known only from Cavalla Forest in eastern Liberia in west Africa, where it was observed just nine times in the period from 1981-84. Sightings ceased in the latter year, when the only known specimen was collected and housed in the Museum Alexander Konig, Bonn, Germany, where it was described in 1985.

Currently classified as Data Deficient by BirdLife International, revised from its former listing as Critically Endangered. Two expeditions in 2010 and 2013 failed to re-find the species, while previous searches were prevented by the volatile political situation in the country. Cavalla Forest itself is recognised as an Important Bird Area by BirdLife, but is not officially protected and is under threat from slash and burn agriculture and hunting, though logging is not permitted. 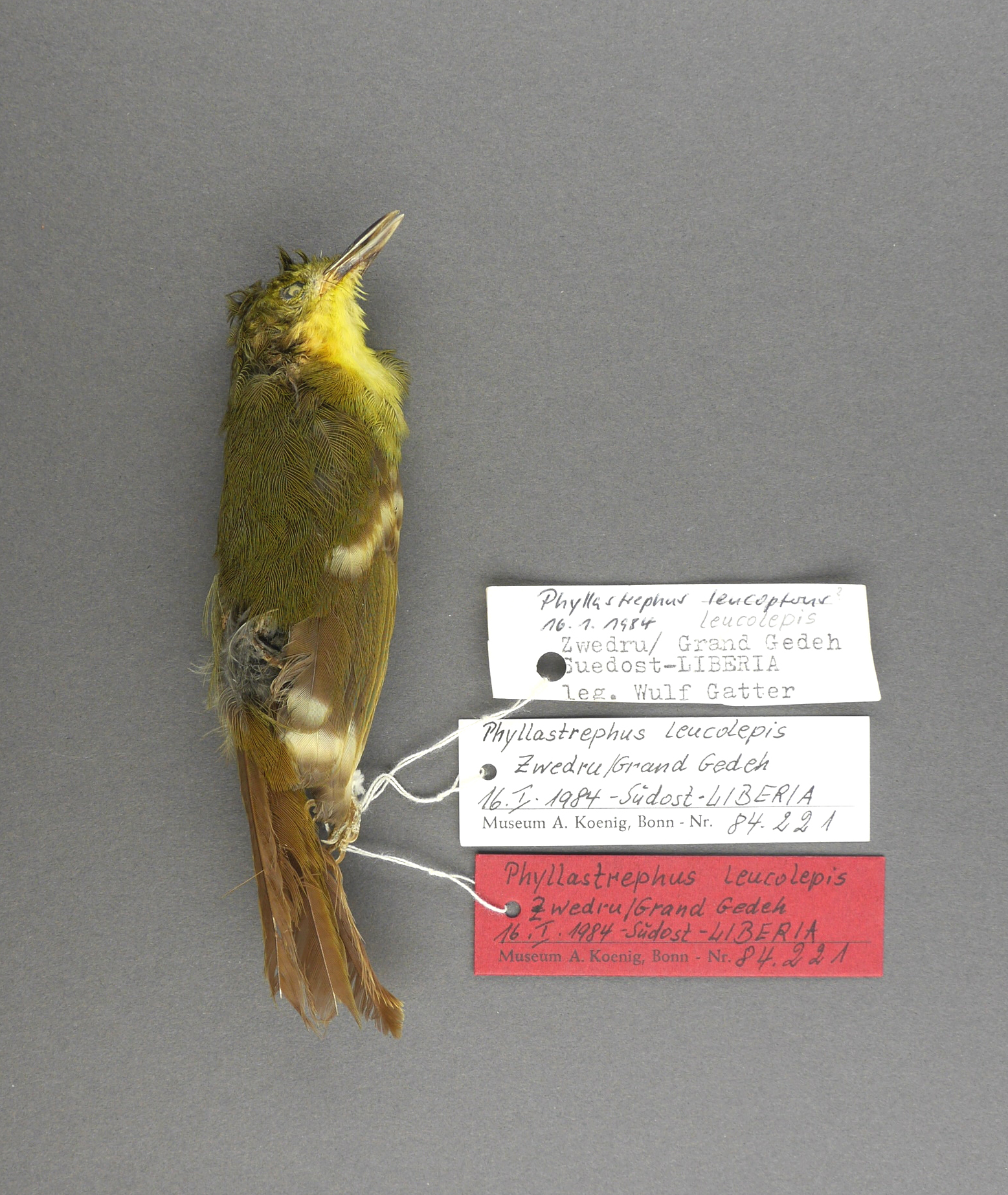 The only known specimen of Liberian Greenbul had to give up samples of its toe pads to determine what it really was (Till Töpfer).

The taxonomic status of Liberian Greenbul has long been considered unclear, and to resolve whether it was a distinct species, an aberrant plumage variation or a hybrid, Dr Martin Collinson and his team at Aberdeen University and another team at the Senckenberg Natural History Collections in Dresden, Germany, performed two DNA analyses of the only known specimen (using non-destructive samples from the lone specimen’s toe pads), plus blood samples from Icterine and White-fronted Greenbuls.

Liberian Greenbul gene sequences were found to be virtually identical to those of Icterine Greenbuls taken in the field at Cavalla, strongly suggesting that this obscure 'species' was in fact an unusual example of its common and widespread counterpart. This lack of genetic difference is most likely to be because Liberian is a localised plumage variant or a very recently diverged new species which still retains most of its ancestral genes. However, the failure of expeditions to find any individuals Liberian Greenbul again in its limited known home range would seem to preclude the latter hypothesis.

Though only one specimen was available for testing and no complete greenbul phylogenetic analysis has ever been performed, previous molecular comparisons have shown genetic divergences of between five and 10 per cent among other greenbul species, which were not shown at all by Liberian Greenbul.

Liberian Greenbul lives or lived in forests where Icterine was commonplace, but cannot now be found. Perhaps it has gone extinct, but the genetic data point to another explanation: that the white spots of the type specimen originated from a unique genetic mutation or from a dietary deficiency during feather growth, producing a loss of pigmentation. The pattern produced seems to indicate the simultaneous growth of juvenile feathers rather than the patchier growth after and adult moult, evidence supporting a pigment problem. All known observations of this probably sedentary species occurred between October and February, consistent with the Liberian Greenbuls being juveniles in an equatorial country.

With both teams having arrived at the same results using comparable methods, it is highly likely that their conclusions hold up and that Liberian Greenbul was merely a colour aberration, similar to that seen in many other bird species on occasion.

However, Cavalla Forest is not only important for this mysterious greenbul. It currently holds good numbers of five Near Threatened species, including Crowned Eagle, five Vulnerable species including White-breasted Guineafowl, and the Data Deficient Yellow-footed Honeyguide. Add to this the presence of rare mammal species, and the mounting threats of logging, hunting, clearcutting and mining underline that it is imperative that the site is better protected.