Do birds pay a price for winter wandering?

In years when winter conditions are especially harsh, birds that depend on conifer seeds for food are sometimes forced to leave their boreal forest homes and wander far from their normal ranges to find enough to eat. A new study published in The Auk: Ornithological Advances uses citizen science data to show for the first time that these winter movements – known as 'irruptions' – lead to a decline in birds' population density in their breeding range the following summer, suggesting that irrupting birds succumb to the difficulties of avoiding predators and finding food in unfamiliar landscapes.

Many birders love irruptions, because they can temporarily bring seldom-seen boreal birds south in large numbers. However, ornithologists know very little about how these journeys into unfamiliar territory actually affect bird populations. Red-breasted Nuthatches are a useful species in which to study this, because they return to the same core breeding areas even after winters with massive irruptions, making it possible to track how their breeding populations are faring from one year to the next. 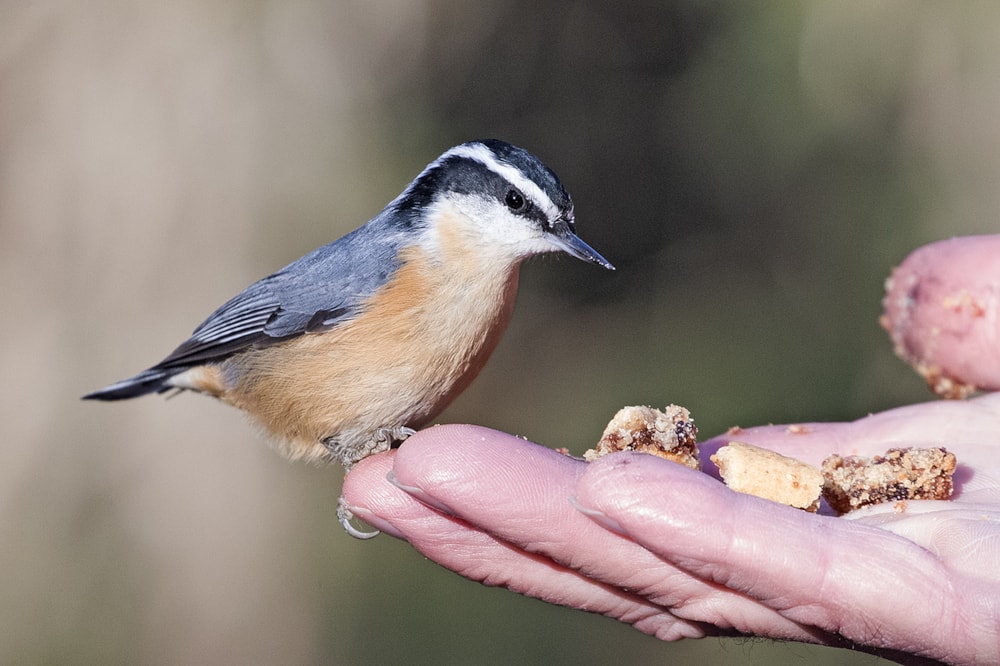 Red-breasted Nuthatch has been known to feed from the hand in certain areas, but the data suggest that irruption years – when birds move long distances into unusual areas – usually spell bad news for population levels (Andrew Moon).

Environment Canada's Erica Dunn analysed more than 50 years of records from Ontario's Long Point Bird Observatory (LPBO) against citizen science data from Project FeederWatch, the Christmas Bird Count and eBird to confirm that autumn irruptions at Long Point are a good indicator of what's going on with nuthatches across North America in any given year. She then used Breeding Bird Survey data to see how nuthatches fared in summers following major irruptions. Her findings showed that breeding population density tended to fall noticeably following winters in which nuthatches had wandered more widely than usual.

This is the first study to demonstrate a correlation between the magnitude of birds' winter irruptions and their population density during the following breeding season. While these large-scale movements may be a necessity when food is scarce, the rigours of travel, exposure to predators and need to find food in unfamiliar places could all take their toll.

Dunn explained: "This paper actually had its genesis over 30 years ago, when I was running LPBO's Ontario Bird Feeder Survey and noticed that feeder-watchers were reporting more nuthatches in winters following large fall irruptions at Long Point. When the biggest irruption ever at LPBO occurred in 2012, I was inspired to use their 50-plus years of data to investigate that old observation in more detail.

"It was truly a project without a particular goal or hypothesis – I simply had a great dataset and wanted to see what I could learn from it. Citizen science data are great for this kind of exploration, because the datasets are so large and are freely available to anyone who wants to work with them."