Sitting between Orkney and the Shetland mainland, Fair Isle has a long and impressive history of attracting avian migrants and vagrants. Since it was established in 1948, Fair Isle Bird Observatory has had a history of attracting many birders hoping to see them. Success or failure largely hinges on the weather conditions, and for those of us dreaming of autumn 'Sibes', a pre-trip prayer to Eurus, the Greek God of the East Wind is advisable.

In 2016, five friends and I managed to secure beds at the famous observatory for a few nights from Saturday 1 October. The weather forecast for our stay was for settled, sunny conditions, with a very light easterly breeze, strengthening as the week progressed. Anticipation levels were therefore high, as we crammed into the small plane and took a scheduled morning flight south from Tingwall, over Mainland Shetland and out over the sea at Sumburgh. We watched Fair Isle grow steadily larger through the cockpit window, until we were disconcertingly level with the Gannets riding the updrafts on the high west cliffs and the pilot suddenly dipped the left wing to take us in a very sharp turn and steep descent to the gravel runway. We stepped out into a calm and sunny day and were then chauffeured to the Obs to settle in. 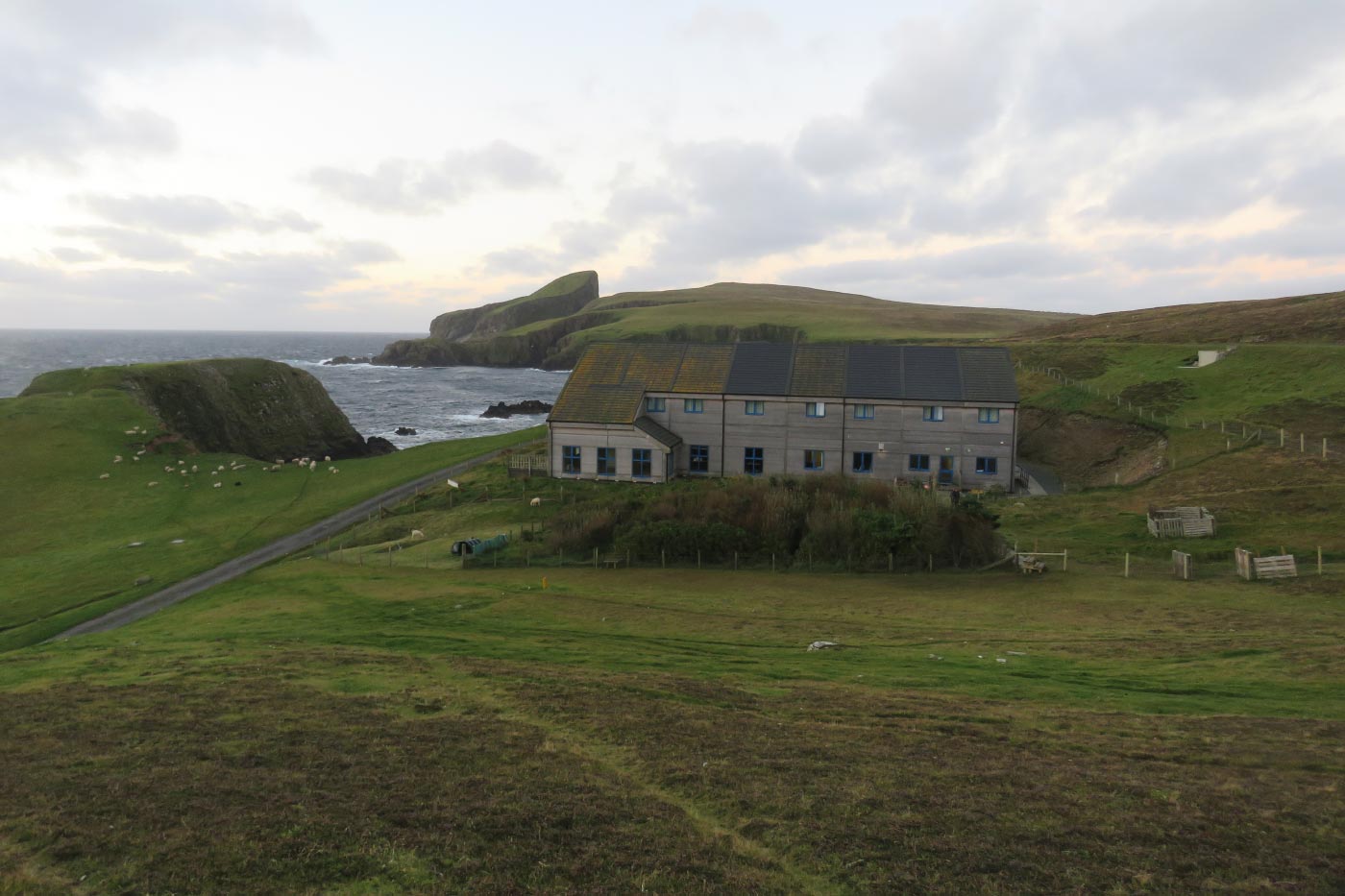 Fair Isle Bird Observatory in October 2016. Sadly the famous building was lost to a fire in March 2019, but plans are under way to rebuild it. Donations are welcome! (Ian Lycett).

The observatory is almost as famous for the quality of the catering as it is for the birds, so it was following a substantial lunch that we headed out into the field. The scarcest bird of note to see was a Greater Short-toed Lark, which we watched as it fed at close range in a sheep pen. The rest of the afternoon was spent scouring the island for migrants. Our efforts produced a small selection that included a couple of Common Chiffchaffs and Yellow-browed Warblers, singles of Bluethroat, Garden Warbler and Common Whitethroat, plus three each of Blackcap and Goldcrest. A solid start, but nothing to really write home about.

Sunday 2 October dawned with a clear sky and just the faintest hint of an ESE airflow. A pre-breakfast wander down to the North Haven beach produced fine views of a Slavonian Grebe, and the return for breakfast was delayed by warden Dave Parnaby holding a juvenile Common Rosefinch, newly extracted from the garden mistnet. As we were looking at that, a Brambling wheezed over above us, and six Redwings dropped vertically from the sky and landed in a willow. Birds were on the move. 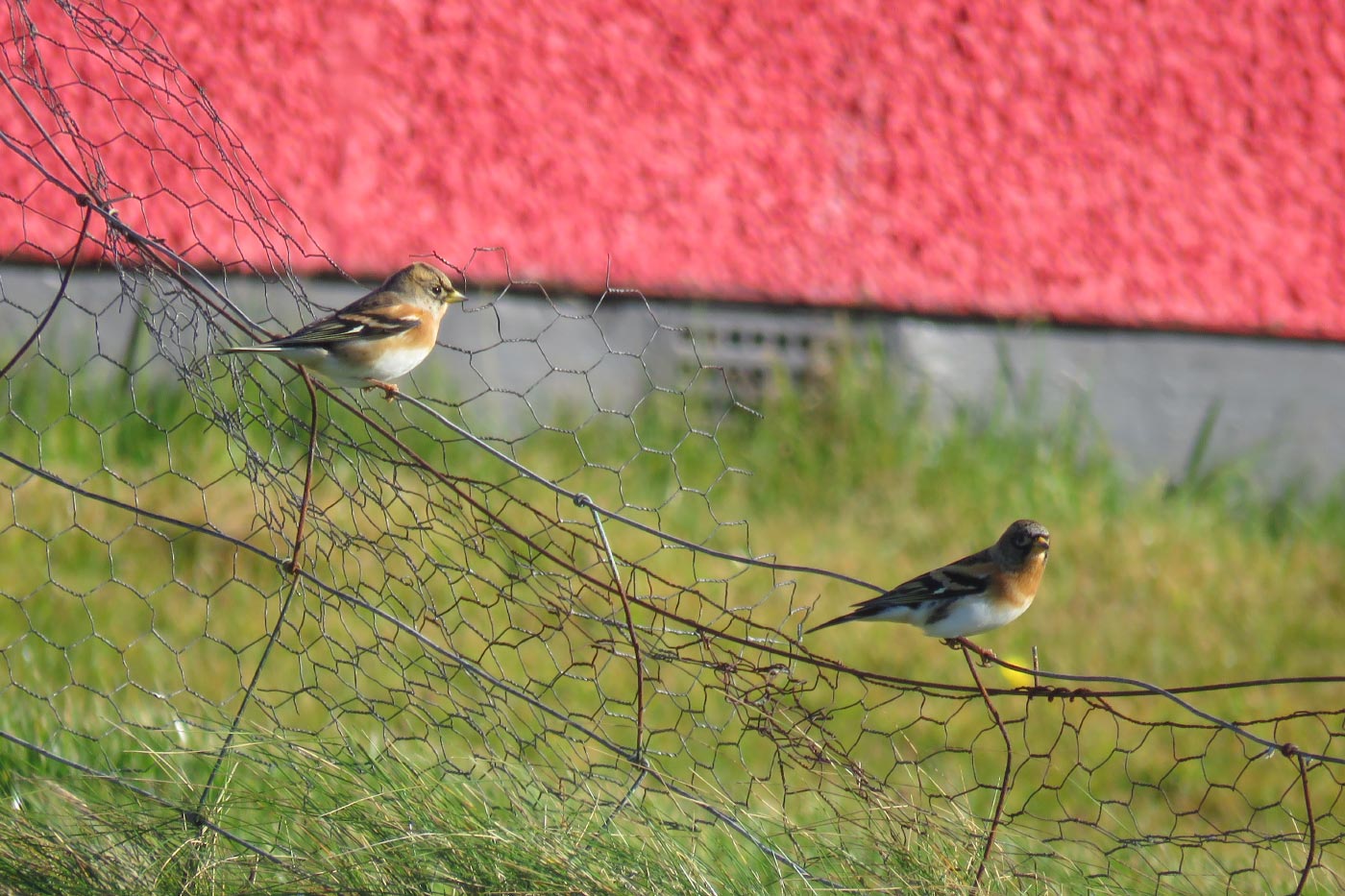 It was quickly clear that plentiful common migrants were on the move on 2 October, including good numbers of Bramblings (Ian Lycett).

Breakfast done, we headed south. There were some new migrants feeding in the rank vegetation of the steep-sided Gully and in the half-dozen trees that are known as The Plantation. Nothing rare, but a few Goldcrests, chiffchaffs and Blackcaps and a Lesser Whitethroat was a good indication that new birds were indeed arriving. The Greater Short-toed Lark was still shuffling around in some sheep dung, but we hurried on to check out the croft gardens. The garden by the surgery held at least 4 Yellow-browed Warblers, several chiffchaffs (including a couple of frosty-looking Siberian tristis), Willow and Garden Warblers and another couple of Lesser Whitethroats.

The garden at Lower Stoneybrek was hosting a Red-breasted Flycatcher and I had literally just put my binos on it when someone said that there was a Radde's Warbler at the back of the garden. That showed well for a minute or so, even sitting in full view on a step for a while before it headed to the cabbage patch at Upper Stoneybrek and on towards the school. I was surprised to discover that this was only the eighth record for Fair Isle. The bushes at Vaila's Trees by Stackhoull Stores were busy, with another Red-breasted Flycatcher, a couple of Whinchats and several warblers to sift through.

Sifting was interrupted by midday news of a Red-flanked Bluetail in Dog Geo, a narrow cleft in the cliffs about halfway up Malcolm's Head. Sure enough, after a bit of a steep yomp we were carefully peering down into the abyss and enjoying superb views of what was once the Holy Grail of British birding. It was picking insects from the damp rock face and would work upwards towards us and into the sunshine, before dropping back down to the bottom again. 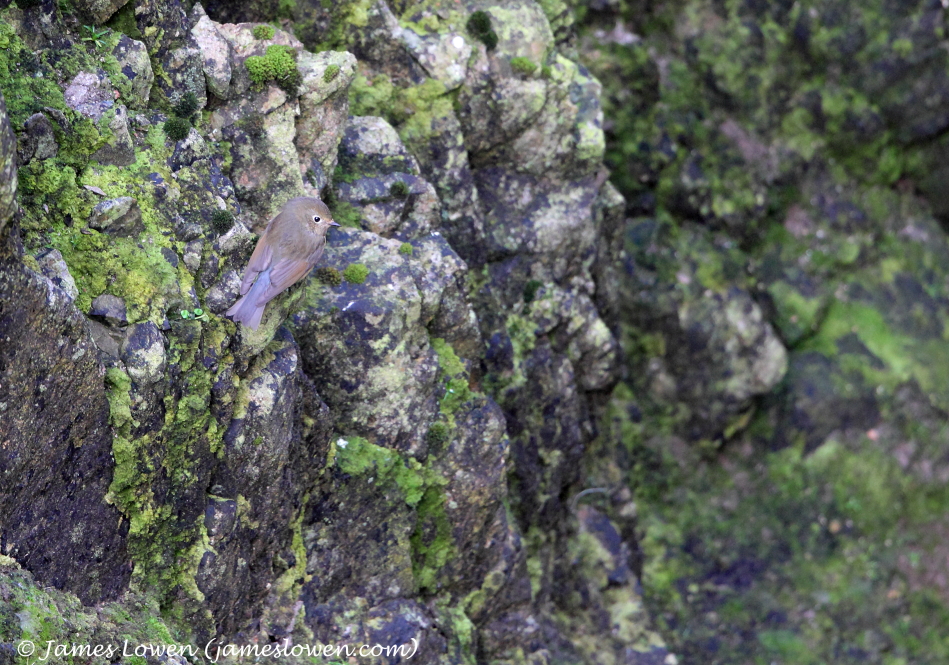 This was turning into a very good day and there was even a wild suggestion that we should consider skipping lunch(!). That idea was rejected on the grounds that there was a Blyth's Reed Warbler showing well in the observatory garden and that we had the offer of a lift back there from Observatory Ranger, Chris Dodd. Lunch was quickly polished off and allowed to settle while watching the Blyth's Reed, several Yellow-browed and other assorted warblers, Bramblings and Redwings through the lounge window with a mug of tea. At 2 pm we accepted a lift back down the island to the Stores. We were admiring another buffy Red-breasted Flycatcher as it flicked about on a drystone wall, when there was suddenly a very loud shout of "PE-CHOR-A!!!".

The distance from the store to North Shirva, where senior assistant warden Ciaran Hatsell was waving from, is probably about 200 m. I covered the distance in a personal best. The pipit had apparently dropped in, but then flown and gone out of view. We were debating which crop field it was likely to head for, when there was a buzzy call from behind us and we looked over the wall to see the Pechora Pipit strutting about on the lawn. It put on a fine show around the croft, before eventually flying up and hitting a window, calling a couple of times in surprise and heading off to the south. There have been just over a hundred British records of this streaky pipit, with Fair Isle accounting for more than half of them. The first record was confirmed here with the aid of a gunshot in 1925. 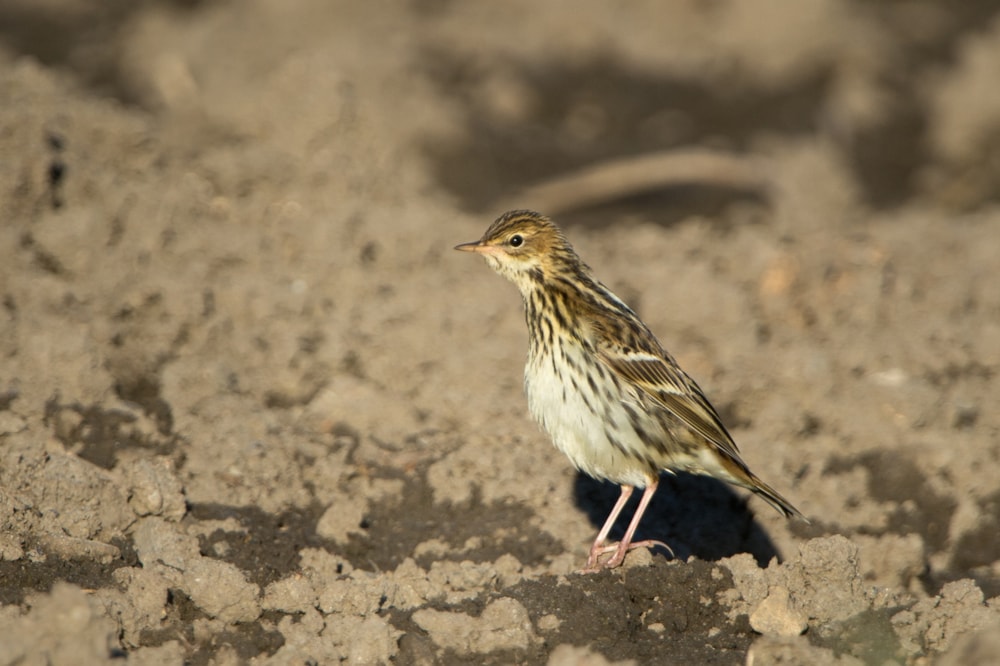 A couple of us were mulling over what to do next, when a Red-throated Pipit flew in calling, touched down briefly then continued on its way. A short time later, we were surveying the garden at Burkle, when the rosefinch that had been ringed in the morning dropped in. It didn't linger, but then two unringed individuals arrived and appropriately fed in a rose clump. Steady shaking of the leaves in a nearby bush revealed the presence of a Barred Warbler. This Godzilla of Sylvia warblers then lumbered up onto the wall and sat in the sun. 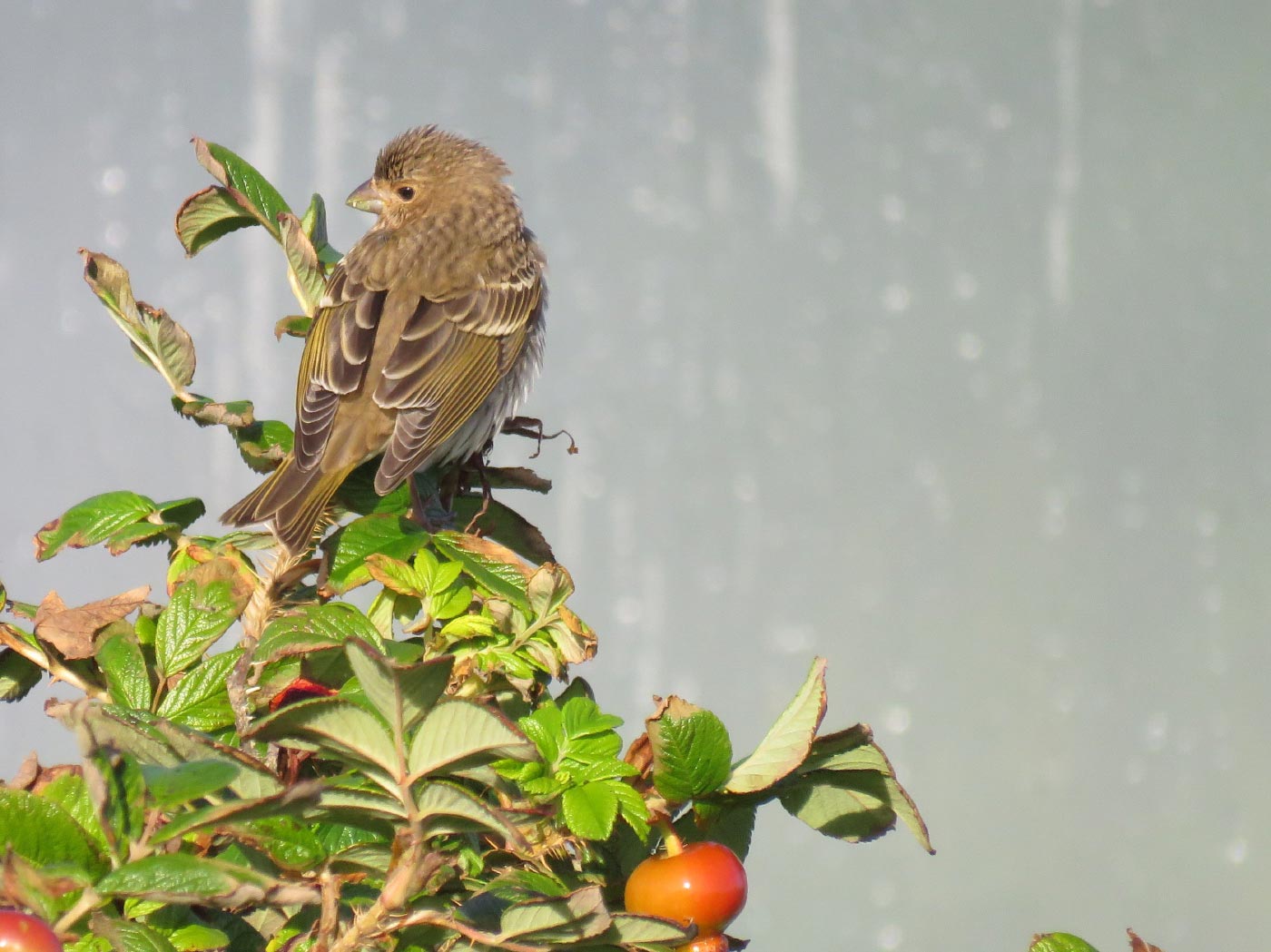 Rosefinch in rose bush ... one of three seen on the day (Ian Lycett).

The afternoon continued in the same vein, with lots of birds to work through and a sense of anticipation that every weedy clump or garden might hold something rare. I had just been scared half to death by a Jack Snipe flying from under my feet as I was working my way through the irises along Meadow Burn, when a 'ping' from my phone alerted me to the news that Steve Arlow had located a Lanceolated Warbler at Midway. This small, streaky Locustella was the species that I had most wanted to get to grips with on this trip. There have been around 160 British records of this skulking Sibe, and Fair Isle accounts for a whopping 61% of them!

I did a swift about turn and headed towards Midway at pace. Passing another Barred Warbler that was sunning on a log pile by the Haa, I strode up the road towards a small gathering of birders, while driving a flock of six Yellow-browed Warblers along the fence line ahead of me. The Lanceolated Warbler had apparently flown into an area of long rough grass. Once everyone had assembled, a couple of volunteers edged through the grass towards the expectant crowd. A small, streaky head appeared like a periscope and our target hopped up onto a tussock, flew towards and between the line of birders on the road, doubled back and landed back in the grass. It showed a few more times and everyone had a decent view. Pleased with our work, we were contemplating the stroll back for dinner when the Lancy broke cover, flew past us and dropped towards the shed on the bend of the road. "Where did that go?" I asked. "The shed!" came the reply. "Which side?" "No, no, IN the shed!" 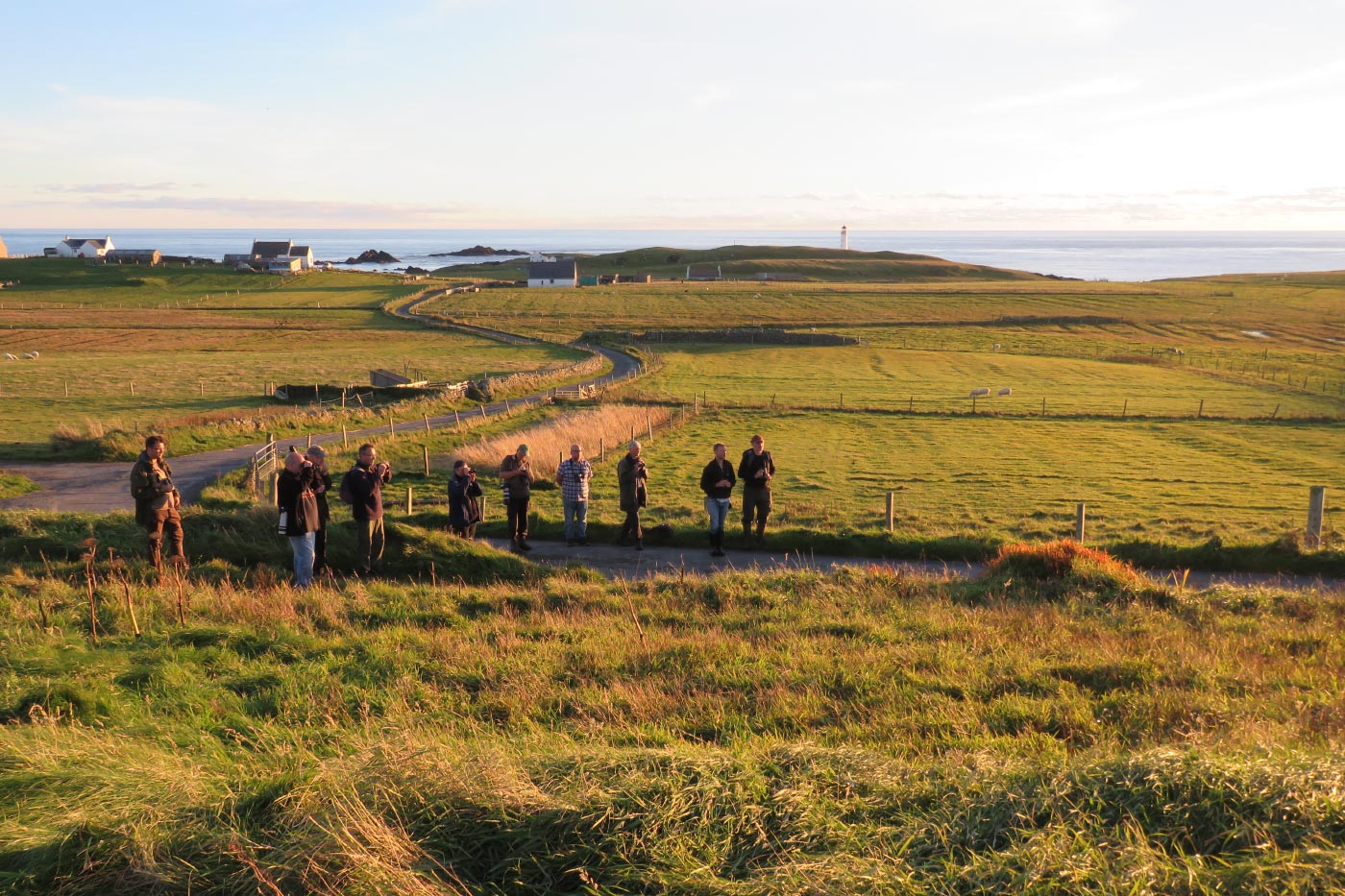 Waiting for the Lanceolated Warbler to show (Ian Lycett). 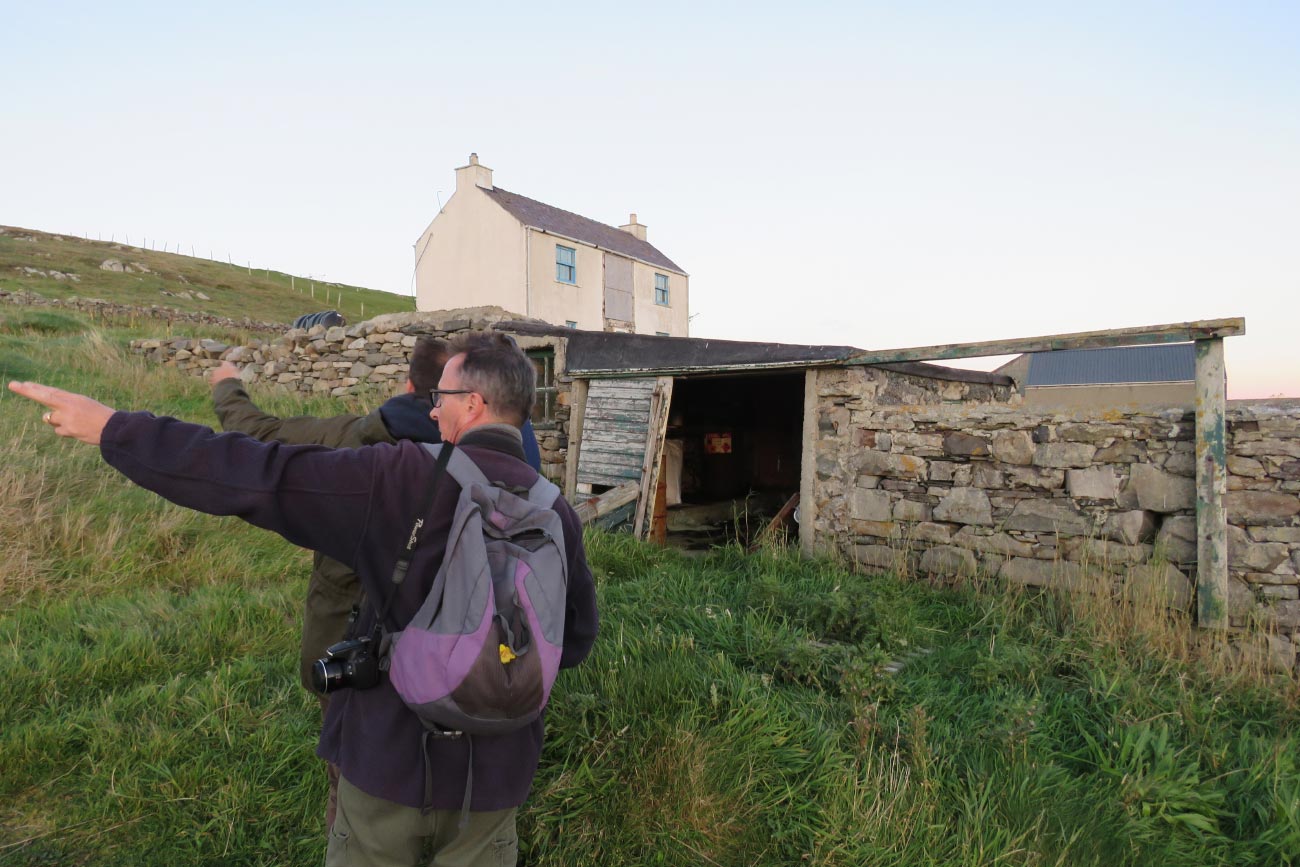 "No, no, IN the shed!" The Lanceolated Warbler's temporary abode (Ian Lycett).

We adjusted our position and looked inside the open front. Behind an assortment of dusty tools and a wheelbarrow, the warbler was sitting on the sill of a small window. Perhaps deciding that this was not optimum habitat for a Locustella warbler, it crept along to the far back corner, where it hopped under the gap in the back door. We skirted round the outside and peered along the line of the back wall. The warbler was still sitting on the step in the sunshine and we were able to appreciate its subtle beauty, before it ran mouse-like back into cover. 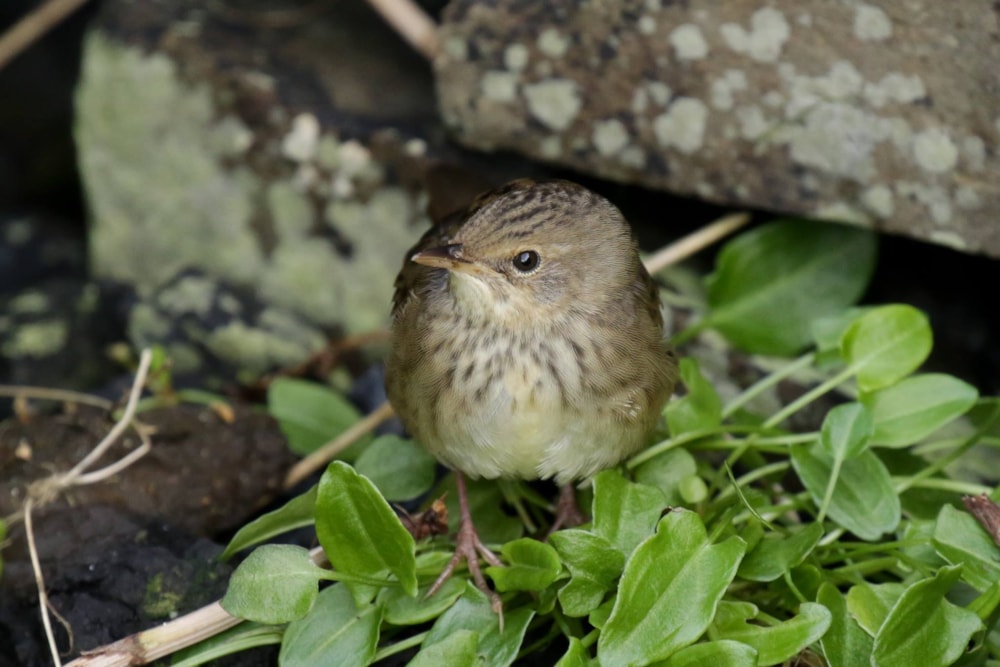 After comically flying into a shed, the Lanceolated Warbler went on to perform very well (Lee Gregory).

With the sun setting we strolled back to the Obs for dinner and a few ales. The log call that evening from those birders present recorded Radde's, Blyth's Reed, Arctic, Lanceolated, three Barred and 72 Yellow-browed Warblers, a Red-flanked Bluetail, four Red-breasted Flycatchers, both Pechora and Red-throated Pipits, two Bluethroats, a Little Bunting, Greater Short-toed Lark, three Common Rosefinches and a host of common migrants. It was without doubt, one of the best days birding I have ever had. To be able to share the experience with great friends in such a spectacular setting and in such lovely weather was superb.

The fire that destroyed the observatory in March 2019 was a terrible event. Plans to rebuild 'Obs Five' are well under way, and there is an appeal to raise the necessary funds for the project. If you have experienced the magic of Fair Isle (or would like to at some stage) please do consider making a donation here: www.fairislebirdobs.co.uk/donations 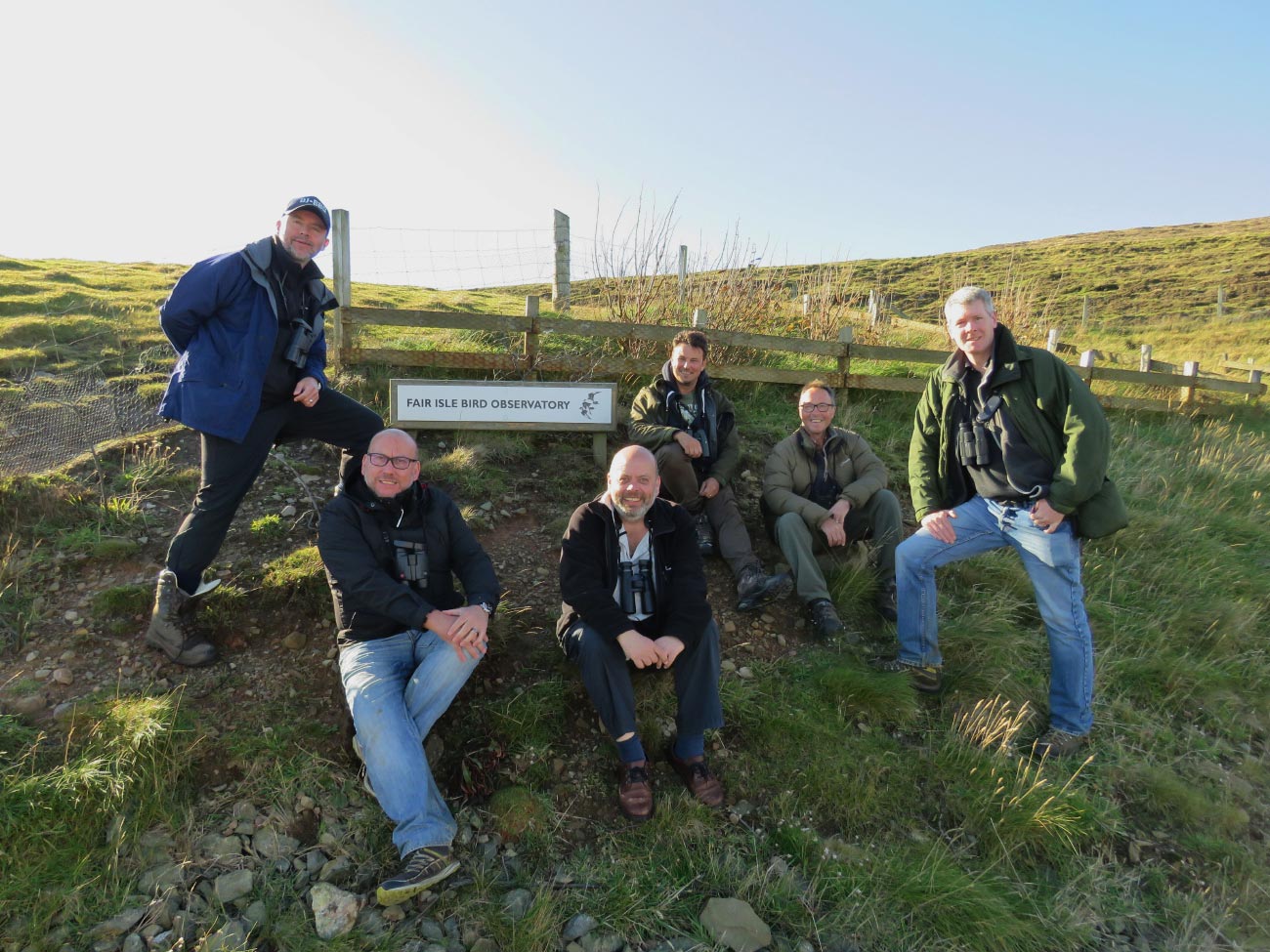 The team after a hugely successful day of Fair Isle birding (Ian Lycett).