Cuckoo Kasper is back!

It was feared that Kasper the BTO satellite-tagged Cuckoo might have become a "friendly ghost" after a month-long silence from his transmitter; but a signal received this week shows that Kasper is not only still alive but that he has moved — he has gone from being the most southerly of the five Cuckoos the most northerly, having moved some 560 km (350 miles) from his last known location. He's currently in the northwest of Congo, close to the borders of Cameroon and Gabon. We can't be exactly sure why we didn't receive signals for a month but it is likely that he was in deep undergrowth, which prevented the tag from charging. Because of the lack of signals we don't know how long it took him to get from his position in the south to his new northerly position, or where he stopped en route, but we sure are glad to see him alive! 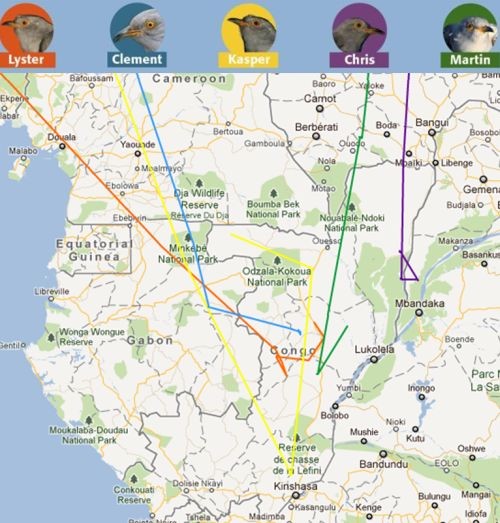 Lyster and Martin have also made northerly movements. Does this represent the start of the Cuckoos' migration? It's hard to say. Maybe they have indeed started their Europe-bound journey; though they could simply be following the rains north rather than making a determined dash to the breeding grounds. As always with these birds, we're excited to see what they do next.

You can keep up with the latest from all the Cuckoos on the BTO Cuckoo pages; you can also read about what we've learnt so far.

Stop press: Kasper has continued to head north and, as of 13th February, is located in western Nigeria. From his last recorded location in Congo on 7th February, he moved 1,500 km (950 miles) northwest in just two days! By 12th February he had moved a further 160 km (100 miles) southwest towards the Nigerian coast. Kasper crossed the Sahara at its widest point during his southbound migration, so all eyes are on the route he takes from here — will he continue to follow the coast or will he turn north again to take a more direct route?

Help raise funds to support this project by becoming a Cuckoo Sponsor (www.bto.org/cuckoos) or by taking up one of BTO's charity places in the Brighton Marathon on April 15th (www.bto.org/run).