Scientists have started counting individual Northern Royal Albatrosses from space, the first time ever that the global population of a species has been assessed from orbit.

Using the highest-resolution satellite images available, scientists from Britain and New Zealand are calculating the number of the endangered albatrosses, which breed on New Zealand's remote and virtually inaccessible Chatham Islands.

The study, published in Ibis, used the DigitalGlobe WorldView-3 satellite, which can observe objects as small as 30 cm across, to locate and count the birds. With a body length of over a metre, the adult albatrosses only show up as two or three pixels, but their white plumage makes them stand out against the surrounding vegetation and, for the researchers, it's a case of counting up the dots.

Before rolling out the technique to the Chatham Islands, the researchers tested their methodology on Wandering Albatrosses at South Georgia's Bird Island. The team found that satellite-based counts were a very close match to ground-based counts of Wandering Albatrosses nests, with a slight over-estimation due to the presence of non-breeding birds and another confounding factor — large, light-coloured rocks. 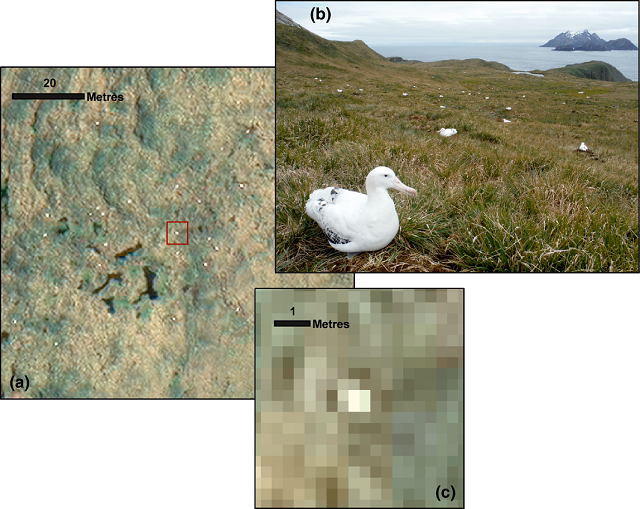 (a) Part of the WorldView-3 satellite image of Bird Island showing the distribution of white dots. (b) Photograph of Bird Island for comparison (R A Phillips). (c) Close-up of a representative white dot in (a), indicating pixel composition.

Results from the Chatham Islands found that satellite-based counts of Northern Royal Albatross in the 2015/2016 season were similar to ground-based counts undertaken on the Forty-Fours islands in 2009/2010, but much lower than ground-based counts undertaken on The Sisters islands in 2009/2010, which is of major conservation concern for this endangered albatross species as it may represent a major population decline in just a few years.

The table below depicts a comparison of satellite and aerial counts* in 2016, 2015 and 2009 for the three breeding locations of Northern Royal Albatrosses in the Chatham Islands:

WorldView-3 satellite image snapshots of the Chatham Islands from February 2016 showing white dots assumed to be Northern Royal Albatrosses. (a) A typical area on Little Sister and (b) a typical area on the Forty-Fours; note the stark difference in densities of birds.

While it may be that The Sisters islands population simply experienced a poor breeding season that year, it highlights the need for consistent, annual surveying, and this new technique for monitoring albatrosses is potentially game changing.

The US government has only recently permitted such keen resolution to be distributed outside of the military and intelligence sectors, and its benefits for consistently monitoring remote seabird colonies such as on the Chatham Islands are already being realised.

Dr Paul Scofield, co-author on the paper, told BBC news: "The Forty-Fours are particularly tricky. I once waited a whole month on the main Chatham Island for the weather to clear so I could land.

"Even if you use a plane, it's a problem as planes are only available infrequently and the wind and cloud prevent flying. Then if you take photos, you have to count them. That can take 100s of hours. This technology still requires the satellite to be in the right place and no cloud but it is certainly cheaper and more reliable."