Ornithologists didn't expect Australian Magpies to spoil a study on the species within hours.

The project in Australia set out to discover more about the behaviour of one of the continent's most widespread and recognisable birds. As well as learning about the birds' movements, researchers hoped to unpick the daily schedule and social life of this intelligent species, and how this might be influenced by an individual's age and sex. Despite the name and superficial similiarity to some corvids, Australian Magpies belong to the family Artamidae, alongside woodswallows. 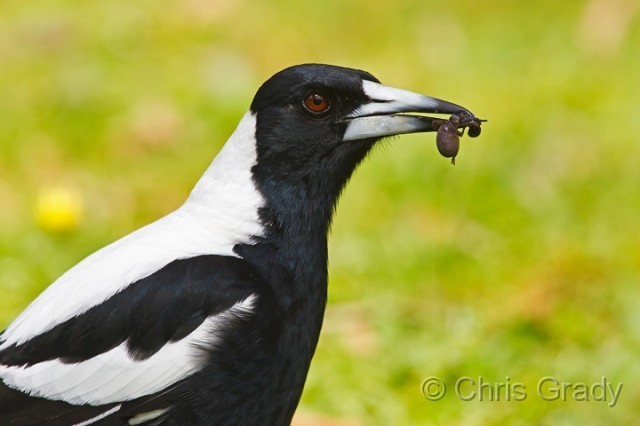 Australian Magpie is a familiar sight in many parts of Australia (Chris Grady).

Just hours after they had been released with GPS trackers attached on a harness, most of the study birds had their devices removed by other group members in an unexpected act of advanced co-operative behaviour. One tracker lasted only 10 minutes after the final bird had been processed, with an adult female making short work of the younger bird's attachment.

No trackers were seen on any of the birds in the group after two days. The magpies had figured out how to use sharp force on the only weak point in the harnesses, which had been designed by Dominique Potvin, Senior Lecturer in Animal Ecology at University of the Sunshine Coast.

These remarkable observations not only show intelligence to rival that of corvids, but revealed the rare behaviour in birds of 'rescuing', when individuals attempt to assist others in distress. Seychelles Warbler, which has been observed removing encumbering seed clusters from conspecifics, is one of the few species in which rescue behaviour has been documented.

Australian Magpies are already known for their co-operative behaviour and intelligence, living in social groups of up to a dozen birds, where siblings help to rear each other's young. However, the study inadvertently revealed a behaviour not previously recognised in the species, as well as notable problem-solving skills.

The researchers concluded that scientists planning tracking studies on social species should bear in mind the possibility that the birds might remove the research equipment.