The white cockatoo with the distinctive orange crest found on the Indonesian island of Sumba, long regarded as a subspecies of Yellow-crested Cockatoo, has recently risen in rank to be officially accepted as a separate species, Citron-crested Cockatoo, under BirdLife International (but not yet IOC) taxonomy. Both species remain classified as Critically Endangered in the IUCN Red List of Threatened Species. Not only does Citron-crested Cockatoo continue to suffer from illegal trapping activity, which has increased since 2017, it also finds itself at the heart of an impressive avian fight club, as recently revealed by researchers. 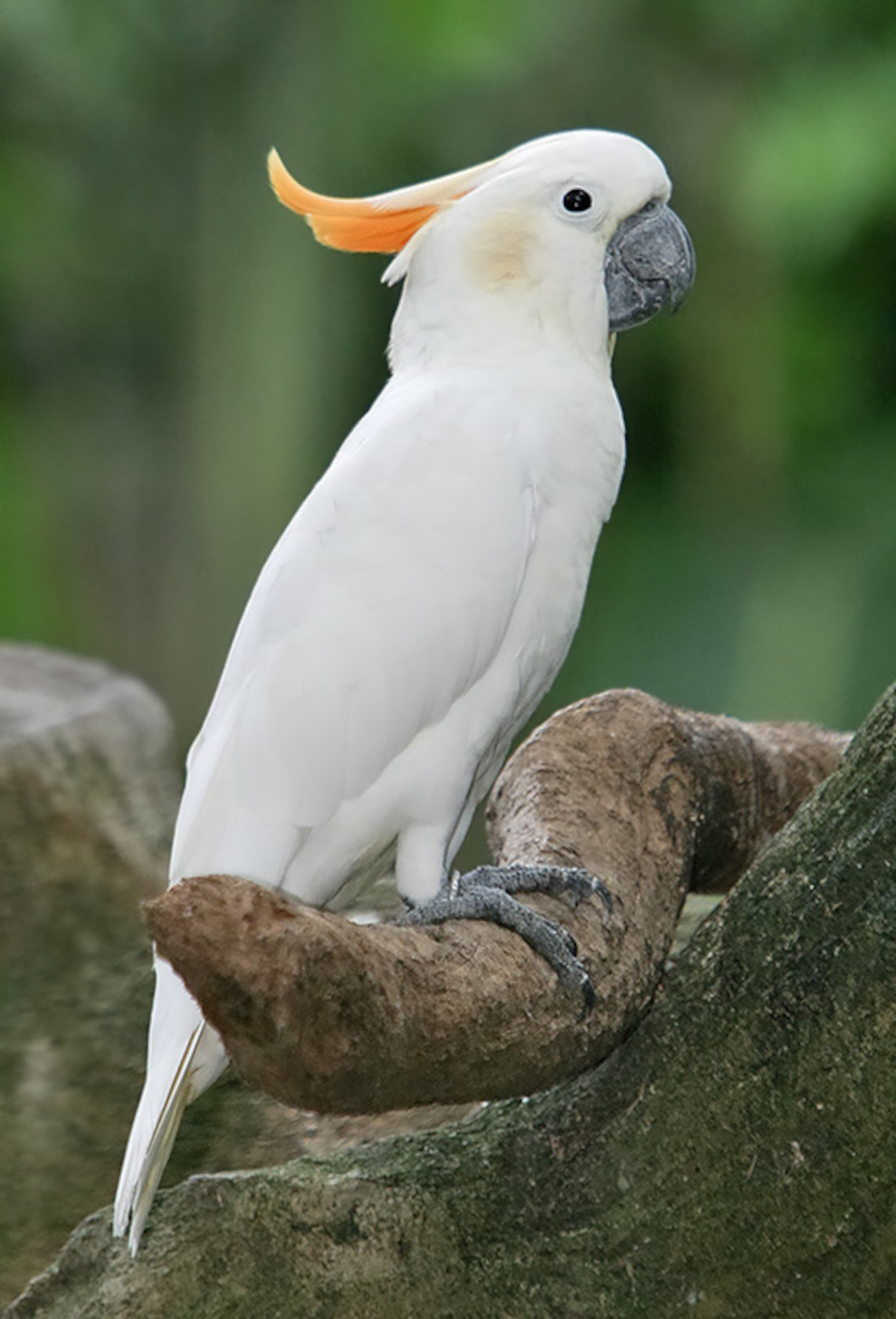 This research, to which Loro Parque Fundación contributed financial support, has been a collaborative effort between the UK-based Manchester Metropolitan University and BirdLife International, and Indonesia's Burung Indonesia and Bogor Agricultural University. It investigates the possible limitations on the growth of the Citron-crested Cockatoo population, in the context of previous and current threats to this species. Its steep decline has been almost entirely due to unsustainable capture for domestic and international trade. Prices for these cockatoos began to rise in the mid-1970s, catalysing the export of thousands annually from Sumba, and resulting in the rapid decrease. Despite an apparent recent stabilisation of the population, illegal trapping and price per cockatoo have shown increases over the most recent five years. The population is currently estimated to comprise between 1,230 and 2,030 cockatoos (equivalent to about 800-1,320 mature individuals). This is considered to constitute a decline in the population size of more than 80 per cent over the past three generations, or 43 years. 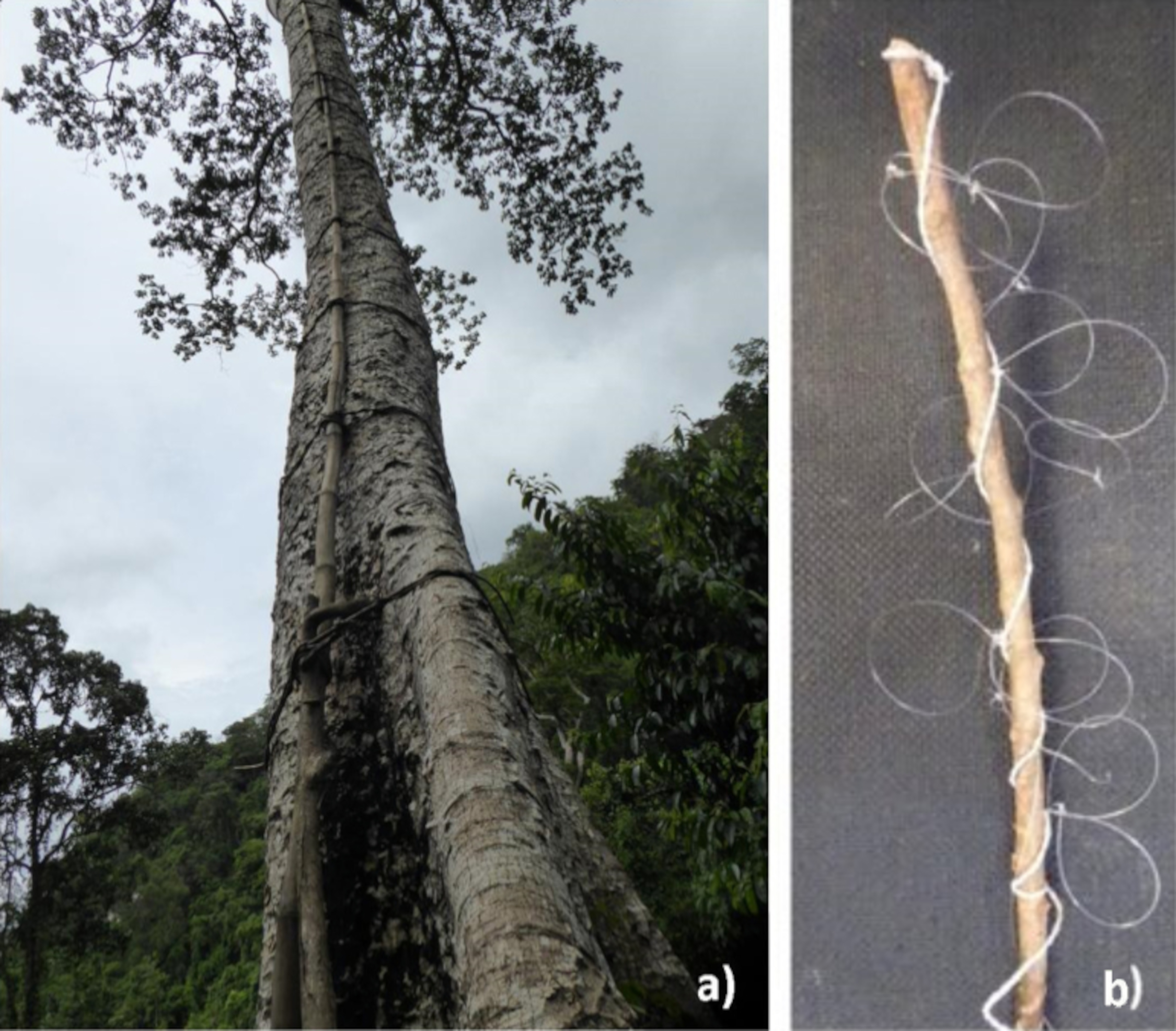 (a) A cockatoo nest tree with traditional clmbing 'ladder' prepared for harvest by illegal trappers; (b) Twig with nylon nooses left behind by cockatoo trappers after use at a roost site.

Other contributors to the decline have been large-scale logging and conversion of forest to agriculture, and now there appears to be an acceleration of forest loss. Furthermore, the Citron-crested Cockatoo depends on large trees for nest sites which, being favoured for building and boat construction, are lost more rapidly than the forest overall. The depletion of these nesting trees aggravates competition with other cavity-nesting species, and Sumba has an unusually rich hole-nesting forest bird community. The competitive nest-hole interactions have now been documented in detail by the researchers, who monitored 95 nesting cavities of cockatoos and their competitors and potential nest-predators, over one to four breeding seasons, using camera traps, direct checks on nest contents, and observations from the ground. 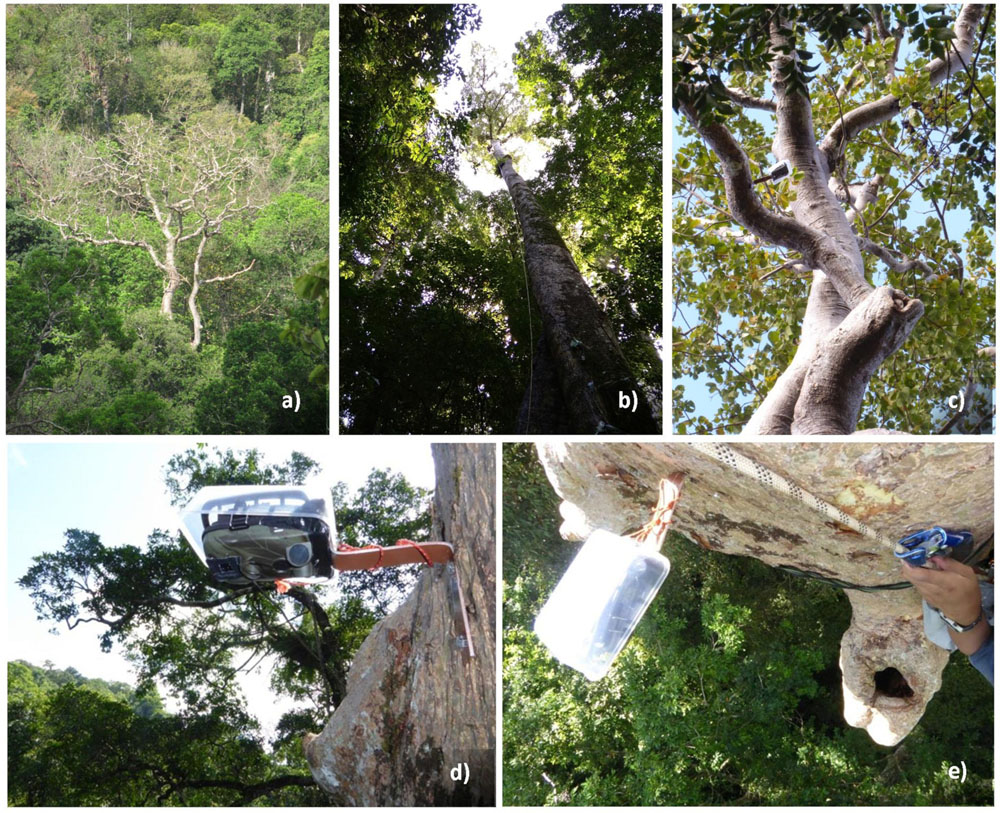 (a) A nest tree in deciduous forest; (b) rope access to emergent nest tree in closed-canopy forest; (c) camera installed above tree nest-cavity, (d) camera trap with support and rain protection; (e) camera above a cavity with upwards-facing entrance.

Cockatoo breeding activity was observed in almost every month of the year, but the egg-laying stage was limited to late June to early December and fledging only occurred from January to April during the rainy season. Substantial breeding season overlap with potential nest-competitors contributes to intense competition for suitable cavities among three large parrot species, two owls and a hornbill. In addition to the cockatoo, these were the Endangered Sumba Eclectus Parrot, also recently elevated to BirdLife species status, Great-billed Parrot, the Endangered Sumba Hornbill and two owl species, Barn Owl and Sumba Boobook.

Of the 95 nesting cavities monitored, 36 with repeated cockatoo activity were followed more intensively, but only twelve cavities came to be occupied by cockatoos. Although they prospected many cavities, cockatoos then rarely attempted to nest, and instead the sites were usually occupied by other cavity-nesters, or by bees. The cavities were in large mature trees (minimum height of 27 m), with two thirds in binung trees, and only 11 per cent in dead trees. Visitation rates by potential competitors were higher at unoccupied cavities than at those containing active nests, due to the guarding behaviour of the occupants. Many directly observed conflicts took place in the tops of the nest trees and were often decided vocally without the intruders approaching the cavities. In terms of diversity of opponents, the majority of these confrontations were won by Sumba Hornbills and owls. However, confrontations between Citron-crested Cocaktoos and Great-billed Parrots were the most common of all observed confrontations, with cockatoos dominating in 14 of 16 interactions. Great-billed Parrots lost most confrontations. 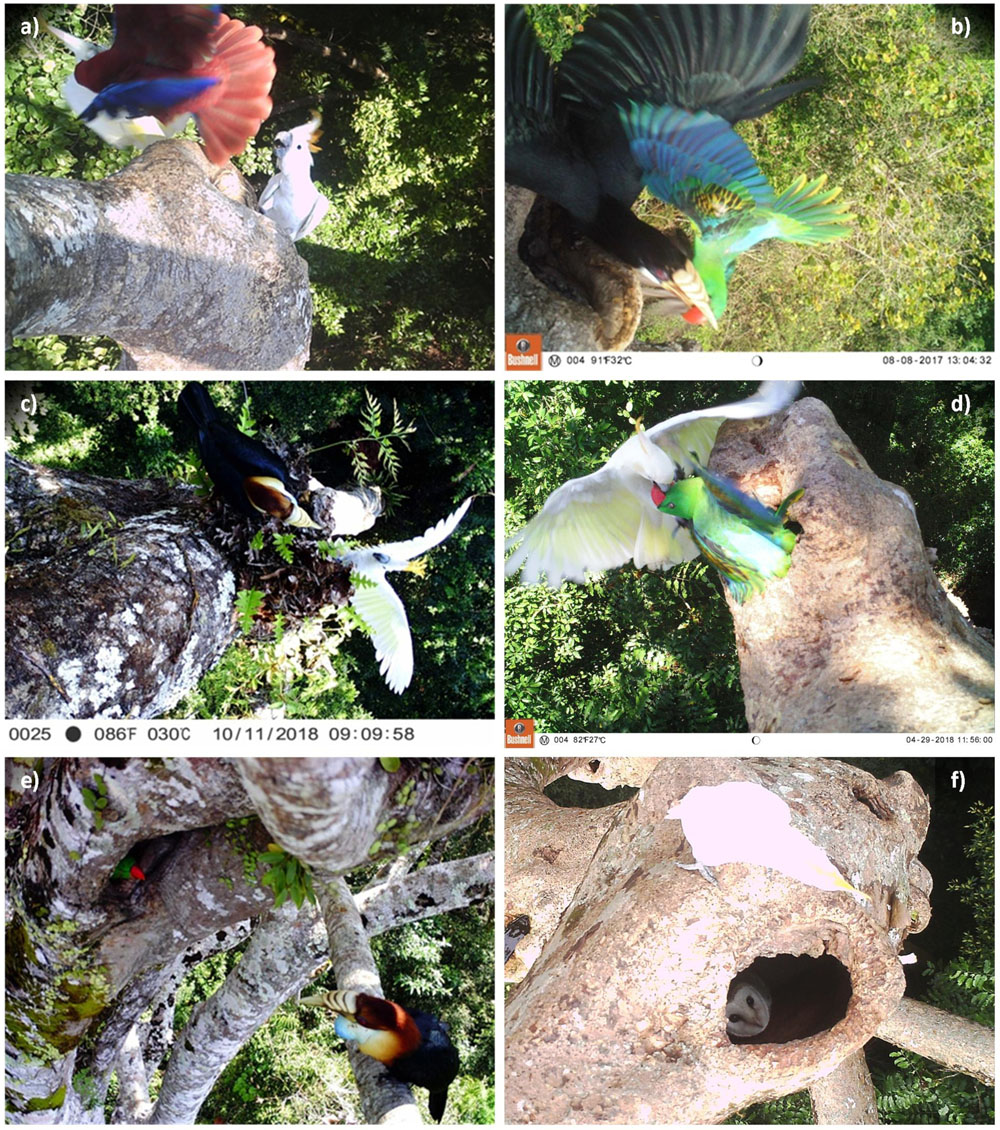 At the few cavities where cockatoos did breed, predation pressure was probably low, and observed success rate high (67 per cent of nests), although the low number of nests found early in the breeding cycle suggests that some may have failed before detection. Sumba Hornbills were the most frequent visitors to active parrot nests, suggesting an addtional role as a potential nest-predator. Among other animals that could hypothetically prey on the monitored nests, 13 species of birds, mammals and reptiles were identified from images of  cameras near the nest entrances. Among these, the Sumba Hornbill, owls and falcons have the potential to be both nest competitors and nest predators.

Intense competition for cavities suggests a shortage of suitable nest-sites, the need for preservation of old hole-bearing trees and a role for safe artificial nest-sites. The latter  could be used for more intensive studies, and be designed to exclude some competitors and predators.  Given the continued illegal trapping, the Citron-crested Cockatoo would benefit from improved local awareness-raising and law enforcement, and forest restoration over the longer-term.