With their skulking habits and largely nocturnal lifestyles, these similar-looking waders might be unfamiliar to many birders. To add to the confusion, their attractive yet cryptic plumages offer the perfect camouflage, allowing them to blend in with their preferred habitats. Neither are they especially numerous – Common Snipe and Eurasian Woodcock are both declining in Britain, while Great Snipe has always been a great rarity. Andy Stoddart has all the information you need to recognise each of these species in the field this autumn. 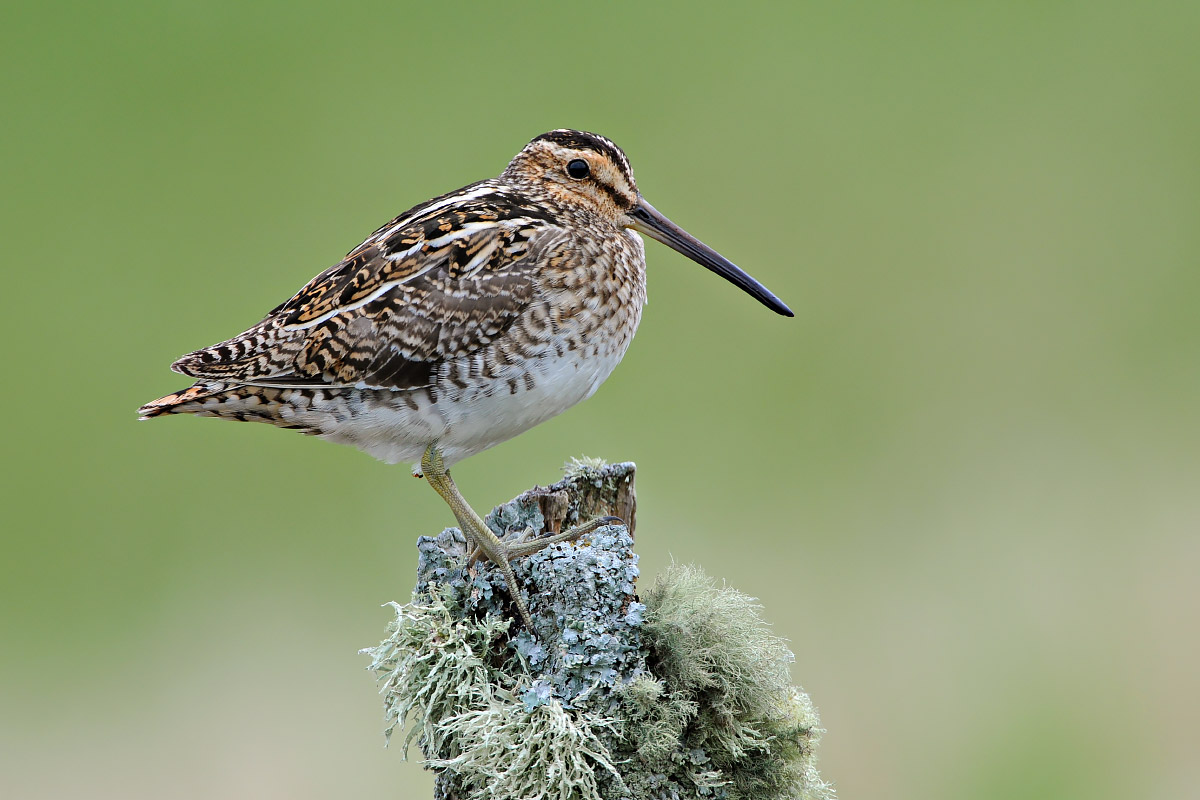 Adult Common Snipe (Balranald RSPB, North Uist, Outer Hebrides, 16 May 2008). On the breeding grounds, Common Snipe will perch readily on fence posts, allowing a full appreciation of its marvellously intricate plumage patterns – a complex mixture of brown, black, white, cream and russet hues. The plumage is hard to describe but fortunately it is easy to enjoy (Richard Brooks).

The snipes and their relative Eurasian Woodcock are enigmatic birds. They are cryptically and beautifully patterned and exhibit very distinctive behaviour, but their skulking habits and often nocturnal lifestyles can make them hard to see well. They are also birds of conservation concern so every encounter is one to be treasured.

This species has a large breeding range, extending across northern Europe and northern Asia. It is a migrant, wintering south into central and southern Europe, Africa, the Middle East and South and South-East Asia.

In Britain it breeds in freshwater marshes, bogs and damp meadows. It is, however, one of our fastest-declining native species. It is currently Amber-listed as a Bird of Conservation Concern and its wonderful 'drumming' display flight is becoming an increasingly rare sight. It is more commonly seen as a migrant or wintering bird.

Common Snipe is generally easily identified. Flying birds, often in small flocks known as 'wisps', draw attention to themselves with far-carrying, dry, rather grating kretch calls. At range they look compact and a little dumpy, with a disproportionately long bill held at a downward angle. Flushed birds rise nimbly, call loudly and fly off rapidly and high for some distance with a characteristic zig-zagging flight.

They typically look quite dark, with a pale patch on the wing coverts, dark and pale bands in the underwing, barred flanks and a pale belly and a prominent white trailing edge to the secondaries.

On the ground the species shows a wonderfully complex plumage full of russet, dark brown and cream hues. The upperparts and head are noticeably stripy. When stationary, they blend beautifully into their preferred habitat of dark pool margins and overhanging pale grasses.

Great Snipe has a relatively restricted breeding range, confined to north-east Europe and north-west Russia, where it frequents remote bogs and wet meadows. Unlike its commoner counterpart, it engages in a fabulous communal lekking display at dusk: calling, stretching itself upright and spreading its tail to flash prominently white outer tail feathers.

It is a long-distance migrant, wintering in Africa south of the Sahara. Remarkably, it has recently been discovered that Great Snipe performs most of this migration in one continuous very rapid flight, flying non-stop for more than 4,000 miles at the astonishing speed of 60 miles per hour. This is one of the world's fastest migratory birds! Sadly, the species is of conservation concern and is classified by BirdLife International as Near Threatened.

Great Snipe is a true rarity in Britain, although historically it was a little more regular. Today it is a rare mid-autumn vagrant, but it can also occur, albeit much more rarely, in spring and has even been recorded displaying here (at Cley, Norfolk, in May 2011). Predictably, Shetland – and particularly Fair Isle – account for the majority of records, but Yorkshire and Norfolk also have a good track record. Away from these counties, however, this is a very rare bird indeed.

Vagrant Great Snipe are not particularly associated with wet habitats and birds are most likely to be flushed from dry grassland and crops. They typically sit tight and are reluctant to fly, rising from almost underfoot. They take to the air heavily and are either silent or give a very distinctive quiet croak. Furthermore, instead of zig-zagging high into the distance they fly low, steady and straight for a short distance before 'stalling' just above the ground and dropping in a rather ungainly 'pancake landing', with outstretched wings and a spread tail. They can then walk off, however, and be difficult to refind.

In flight Great Snipe looks quite large and stocky, perhaps a little Eurasian Woodcock-like, and is slightly shorter billed than Common Snipe. It shows a very distinctive white-bordered dark midwing panel and white-tipped primary coverts, while the white trailing edge is very narrow and inconspicuous.

Other features include wholly barred underparts (lacking an obvious white belly) and dark-looking barred underwings. When landing, the spread outer tail feathers are prominently white. On the ground, white tips to the wing coverts form obvious lines on the closed wing.

In Britain, breeding birds are thinly distributed. They are rarely seen during the day, but at dusk they perform a highly distinctive 'roding' flight, steadily beating the bounds of their territories and giving both high-pitched tiswick and low-pitched grunting calls. Little plumage can be seen, but the bird impresses with its large size, fat, dumpy silhouette, broad, blunt wings and long bill held at a downward angle.

Eurasian Woodcock is most frequently seen here as an autumn migrant. It arrives from across the North Sea in late October and November and is typically flushed from underfoot in low coastal cover. On such occasions it rises heavily and does not call, although the sudden rush of wings can be quite loud at such close range.

As the birds fly off they show some plumage – a beautifully intricate pattern of dark brown and russet, but looking quite uniform with no real tonal contrasts or pale areas other than a rusty brown rump and tail.

Once winter sets in they are harder to find despite the fact that, to the surprise of many, this is said to be one of Britain's commonest wintering waders. They live solitary lives on the woodland floor and are only seen when flushed, but they can also be watched as they fly out at dusk to feed in wet grassland. 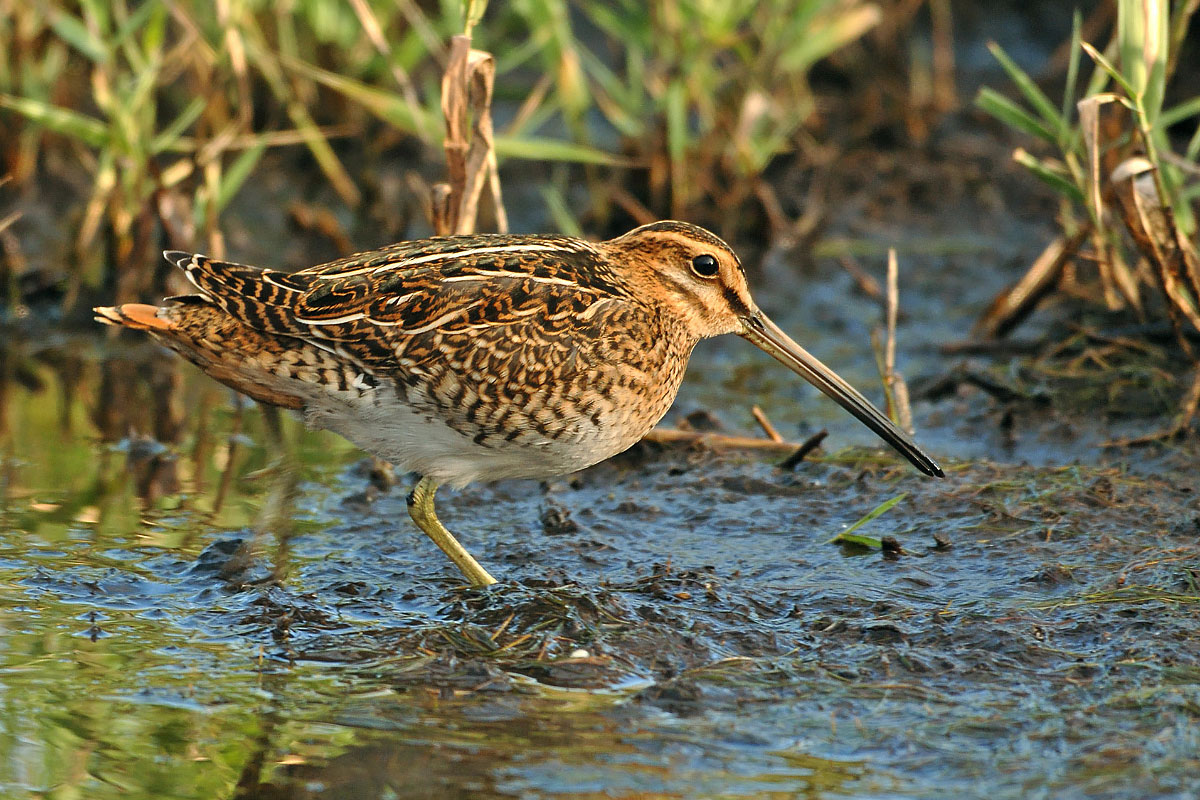 Adult Common Snipe (Porth Hellick, St Mary's, Scilly, 13 October 2005). This is a more typical view of a Common Snipe, caught here feeding in its favoured habitat of deep mud and emergent vegetation. Note the typically intricate plumage patterns with complex internal feather markings and contrasting feather fringes. The contrasting white belly and relatively plain appearance to the closed wing exclude any thoughts of Great Snipe. The strongly rufous hues to the upperparts of this bird suggest that it might belong to the Northern Isles, Faeroes and Icelandic subspecies faeroeensis (Steve Young / www.birdsonfilm.com). 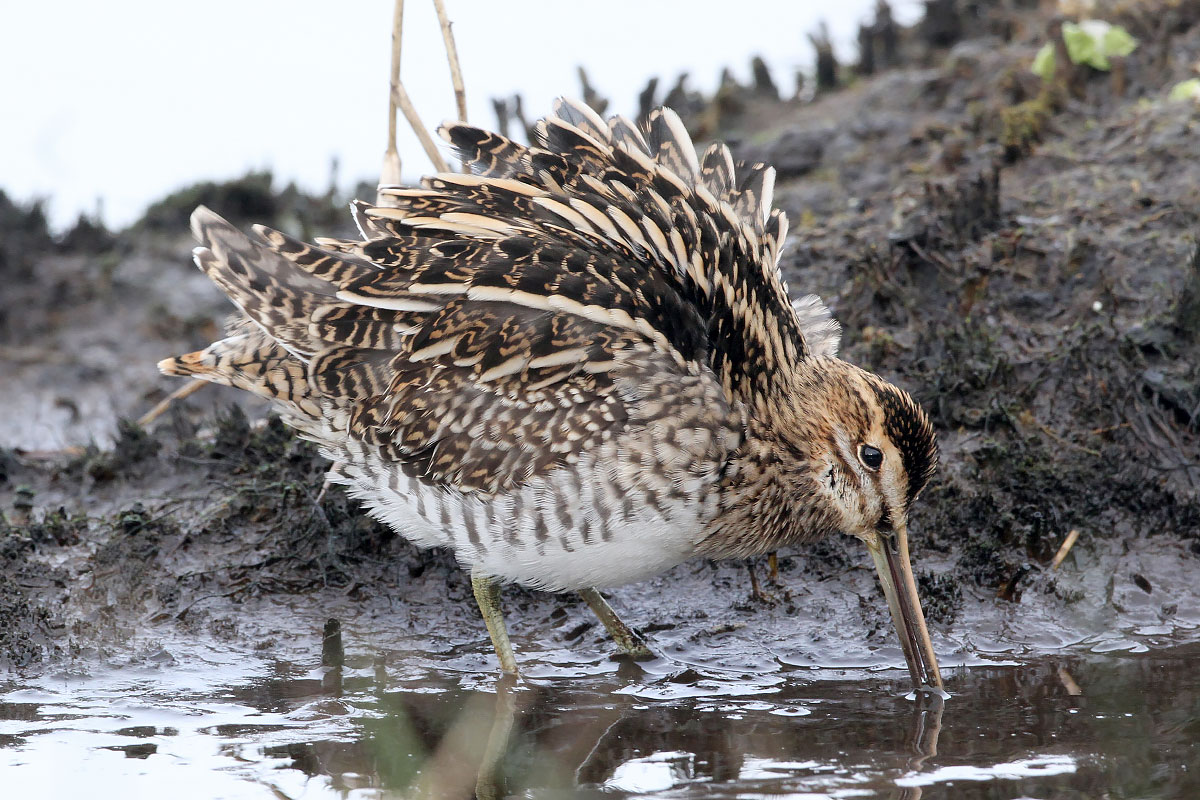 Common Snipe (Lower Moors, St Mary's, Scilly, 18 November 2011). This individual is giving us a quick lesson in bird anatomy. When fluffed up or caught by the wind, the main feather tracts in the upperparts reveal themselves as discrete units. Here one can clearly see the mantle feathers which lie above the upper scapulars and finally the lower scapulars, each comprising a dark block of feathers with a longitudinal cream stripe along its outer border (Dominic Mitchell). 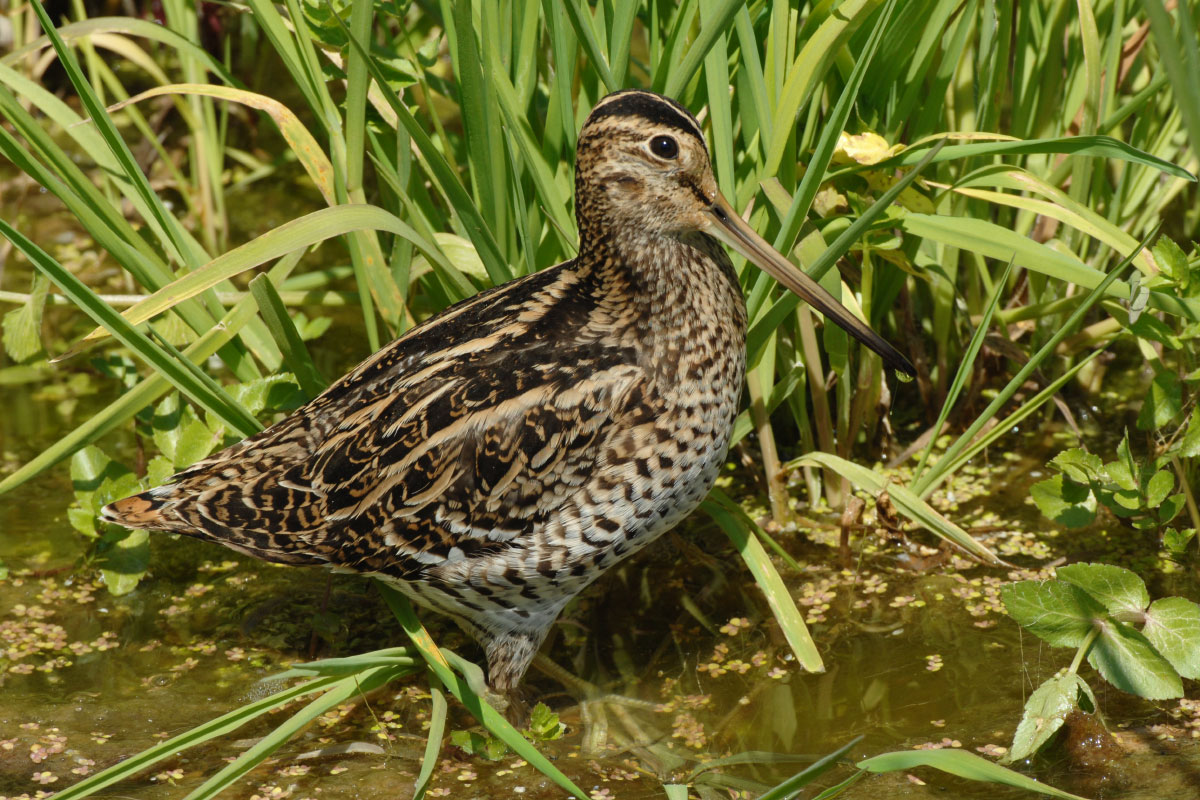 Adult Great Snipe (Kalloni Lake, Lesvos, 20 April 2007). Although closely resembling a Common Snipe, this bird shows a couple of noticeable differences. The flank barring continues onto the lower belly, resulting in no contrasting white area, and the tips to the wing coverts are broadly tipped white, forming very prominent bars across the closed wing. These key features of Great Snipe are backed up by the bird's relatively portly appearance (Richard Brooks). 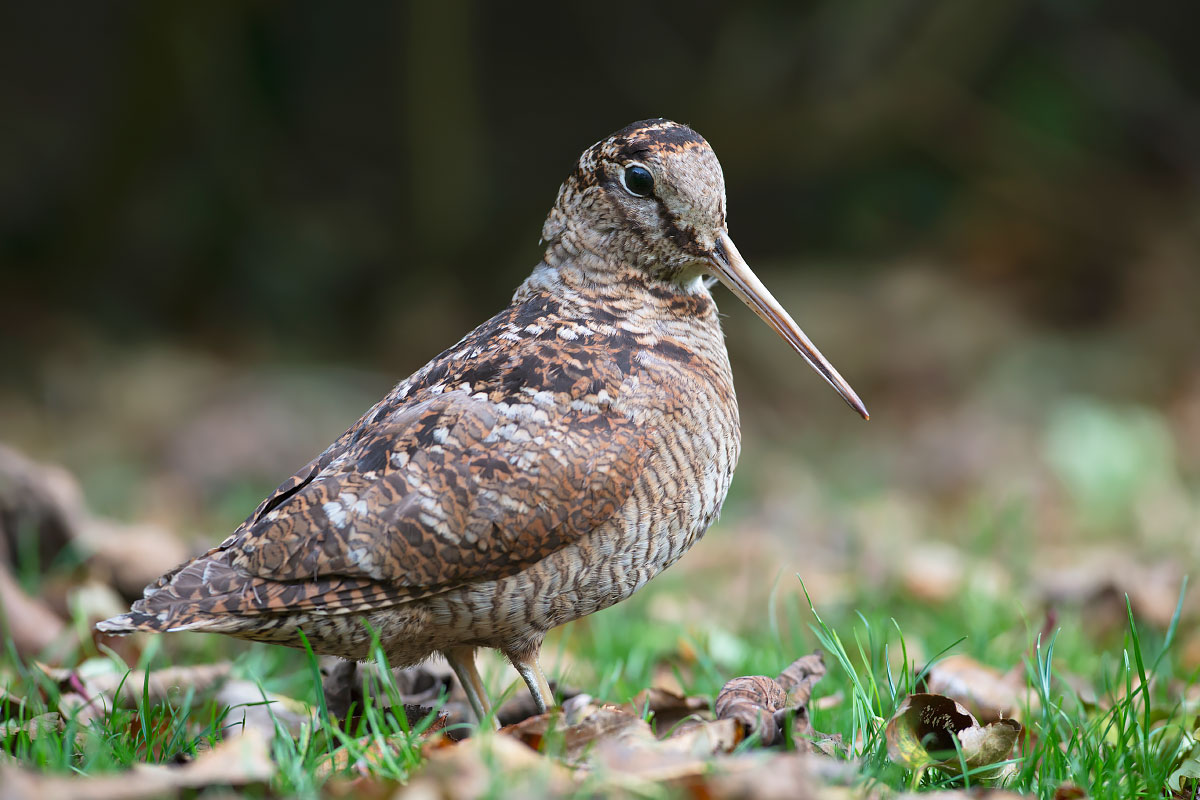 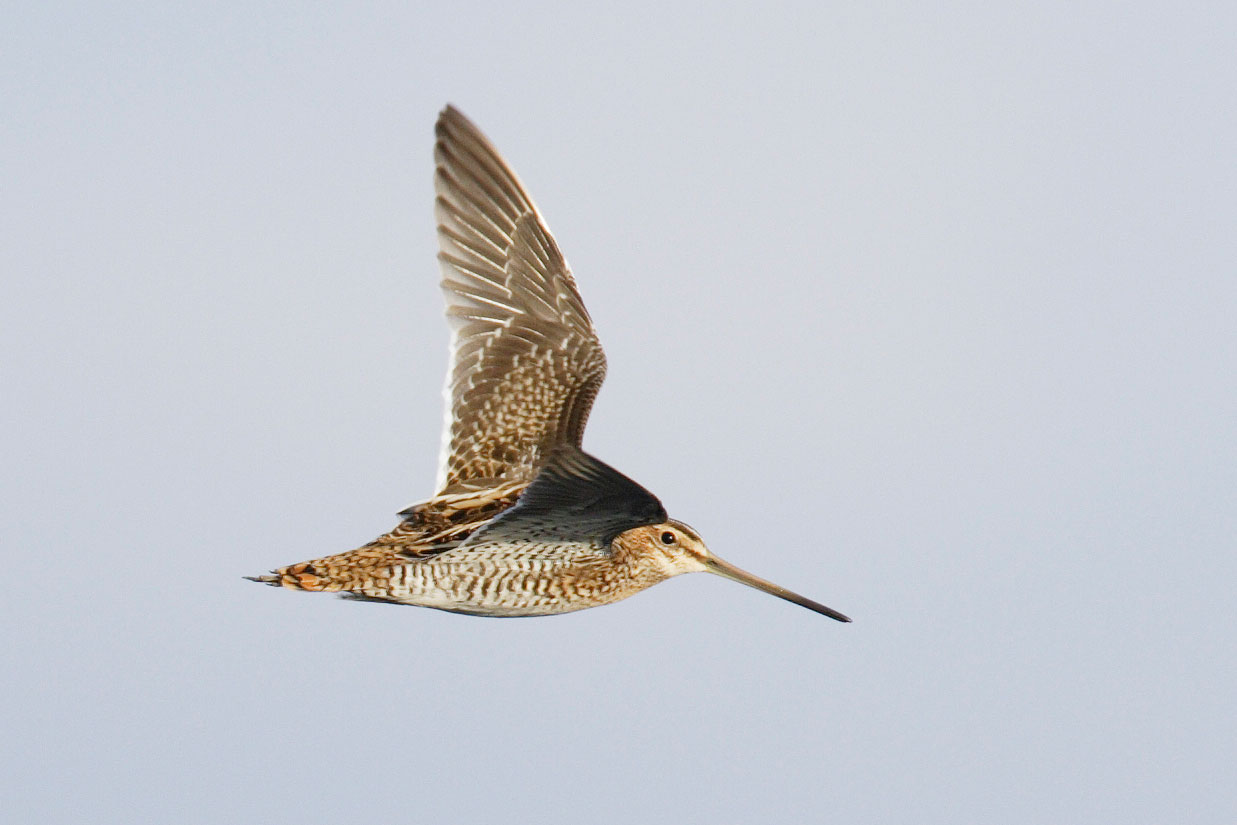 Adult Common Snipe (location unknown, 23 September 2006). This flying Common Snipe has the typical very long-billed appearance, with the bill held at a downwards angle. Note, however, the characteristic upperwing pattern comprising a dark outer wing, a diffuse pale area on the wing coverts and a prominent white trailing edge to the wing formed by white tips to the secondaries. The white belly patch is just visible, although not particularly obvious in such a side-on view, as are the pale 'bands' through the underwing coverts (Mike Danzenbaker / www.agami.nl). 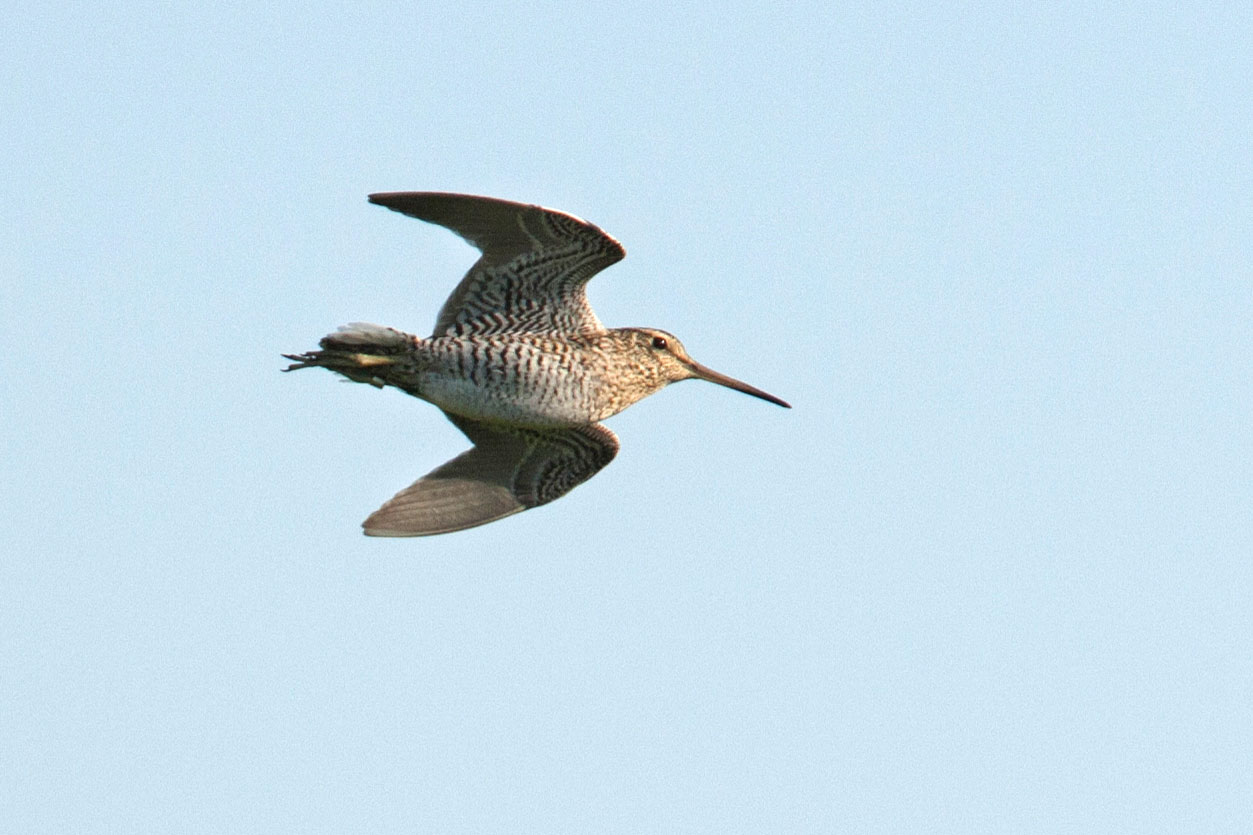 Adult Great Snipe (site unknown, Belarus, 30 May 2011). Compared with Common Snipe, this flying Great Snipe looks a little dumpy, the wings are rather broad based and the bill is on the short side also. Unfortunately the distinctive upperwing pattern is not visible here, but note that the dense flank barring continues, albeit more weakly, down towards the belly, the underwings are uniformly and densely barred and, a key feature of Great Snipe, the outer tail feathers are extensively white (Harvey van Diek / www.agami.nl). 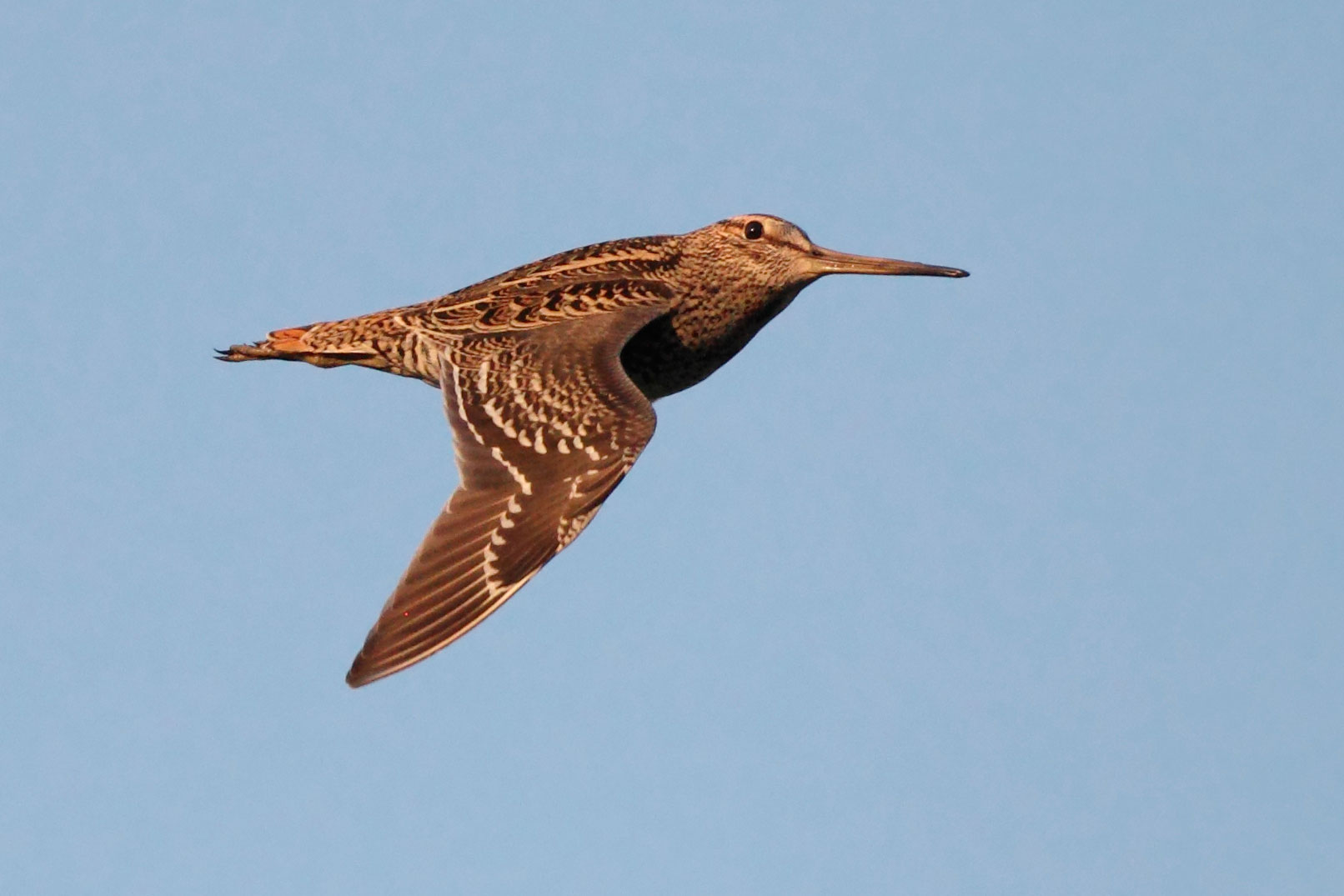 Adult Great Snipe (Rindal, Norway, 9 June 2011). This flying Great Snipe is showing the crucial upperwing features to perfection. Note the rather dark upperwing with no noticeable white trailing edge. Instead, the most striking feature is the white tips to the wing coverts which form prominent white lines across the inner part of the spread wing and also continue onto the outer wing due to prominent white tips to the primary coverts. These lines therefore enclose a dark 'panel' in the centre of the wing (Helge Sorensen / www.agami.nl). 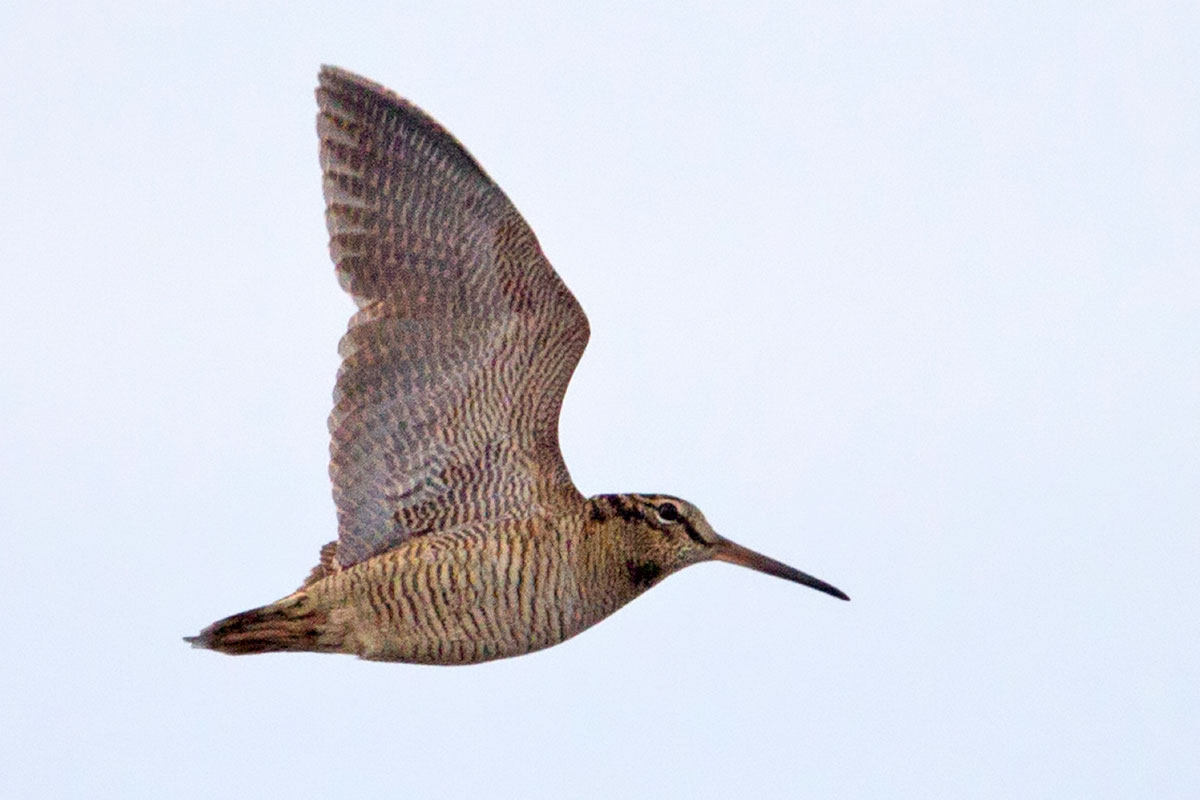 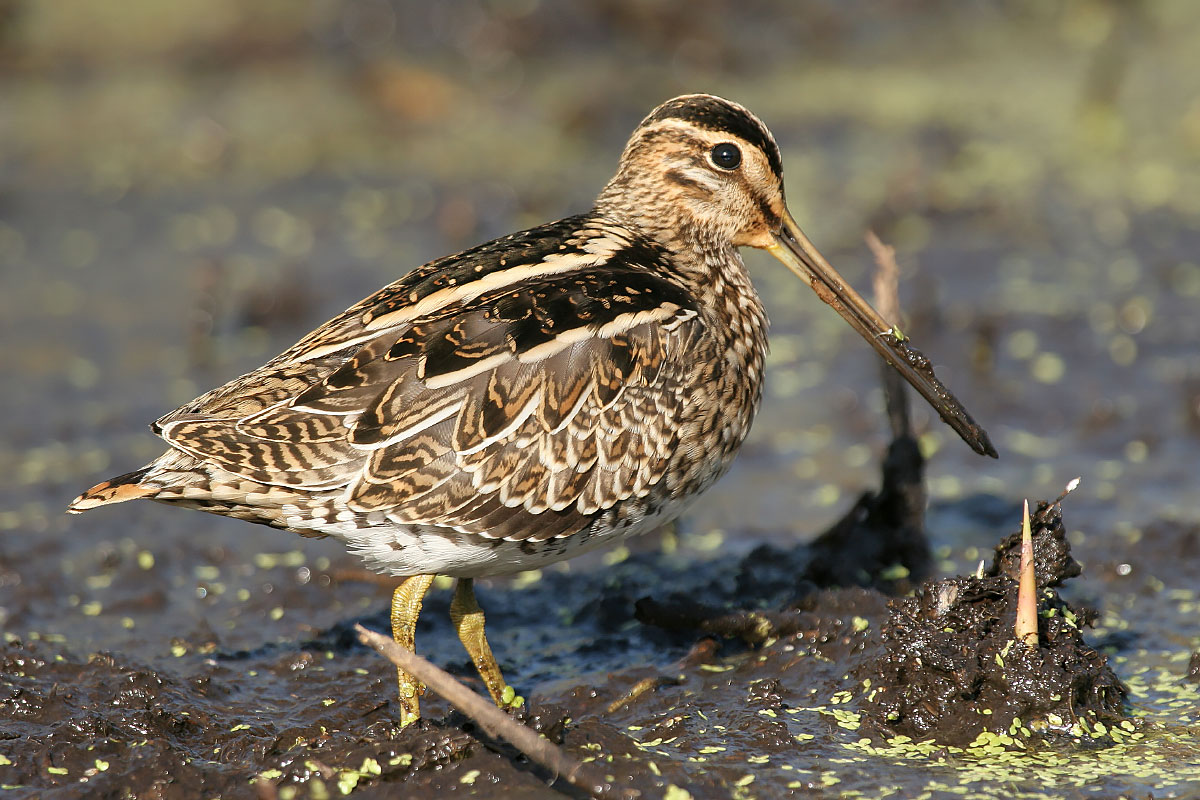 Juvenile Common Snipe (Ouessant, France, 8 August 2005). This lovely portrait of a Common Snipe shows all its key features to perfection. The plumage is very fresh indeed, with beautifully crisp feather fringes. Note that the lesser and median coverts show whitish tips with a blackish subterminal band and a narrow shaft streak which does not break through to the feather tip. In addition the tertials show well-defined, narrow rufous bars, a narrow white fringe and a dark subterminal band. We can be confident therefore that this bird is a juvenile (Aurélien Audevard). 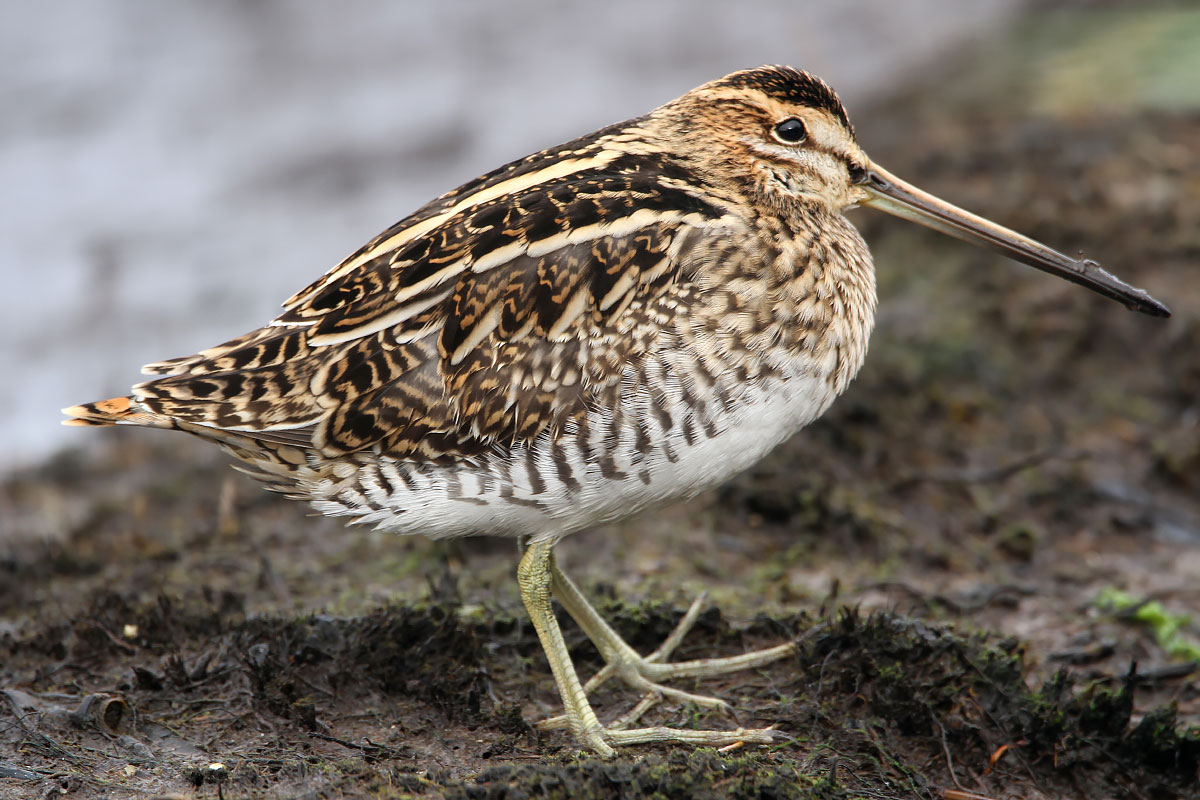 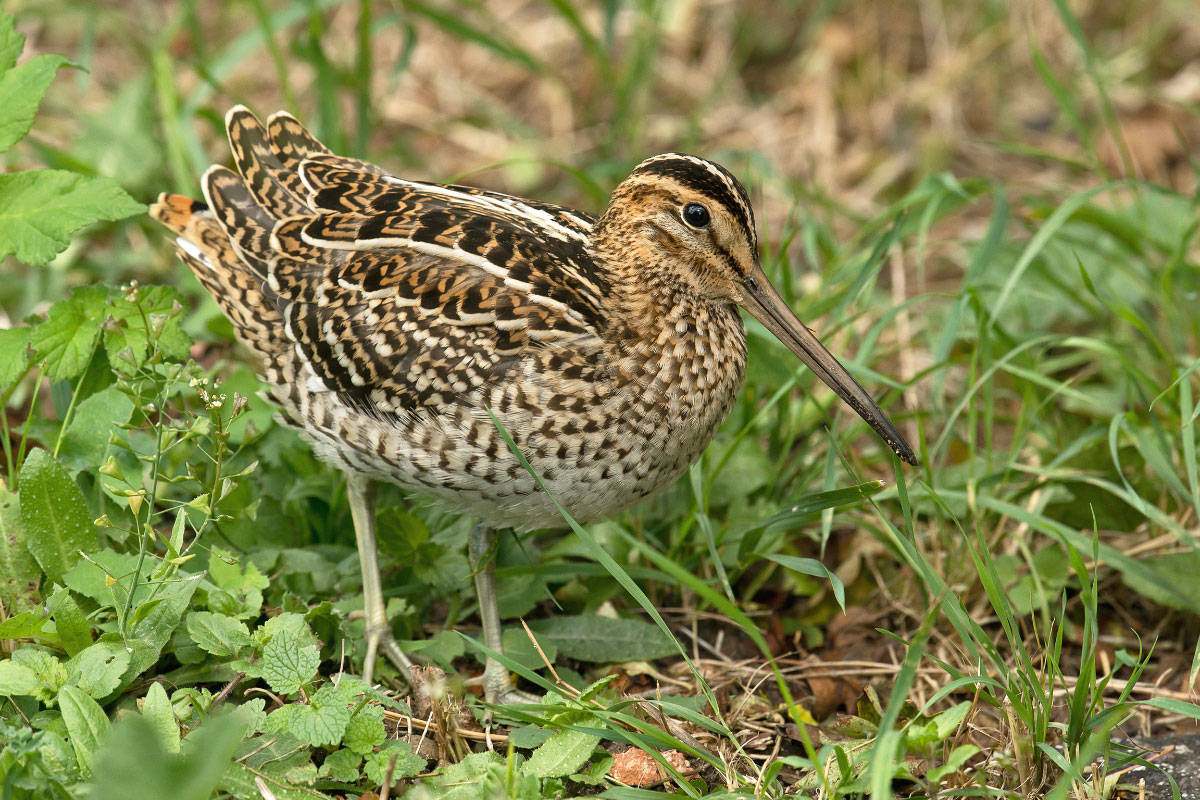 Juvenile Great Snipe (Spurn, East Yorkshire, 16 September 2013). This young Great Snipe is also in beautifully fresh condition. It looks similar to a Common Snipe at first glance, but the flank barring extends well down towards the belly, the broad white tips to the wing coverts form lines across the closed wing and some white is just visible in the outer tail. However, the flank barring is a little narrower that of the spring bird in photograph 3 and the white bars across the wing are somewhat narrower too – both indicating that this bird is a juvenile (Steve Young / www.birdsonfilm.com).