One of the greatest delights of summer is the presence of terns around our coasts. The set of three 'medium-sized' species – Common, Arctic and Roseate Terns – presents some complex identification problems. Traditionally, field guides emphasise bill colour and pattern, but in reality these species are usually seen in flight and at range. It is best to focus on structure, flight action and plumage. 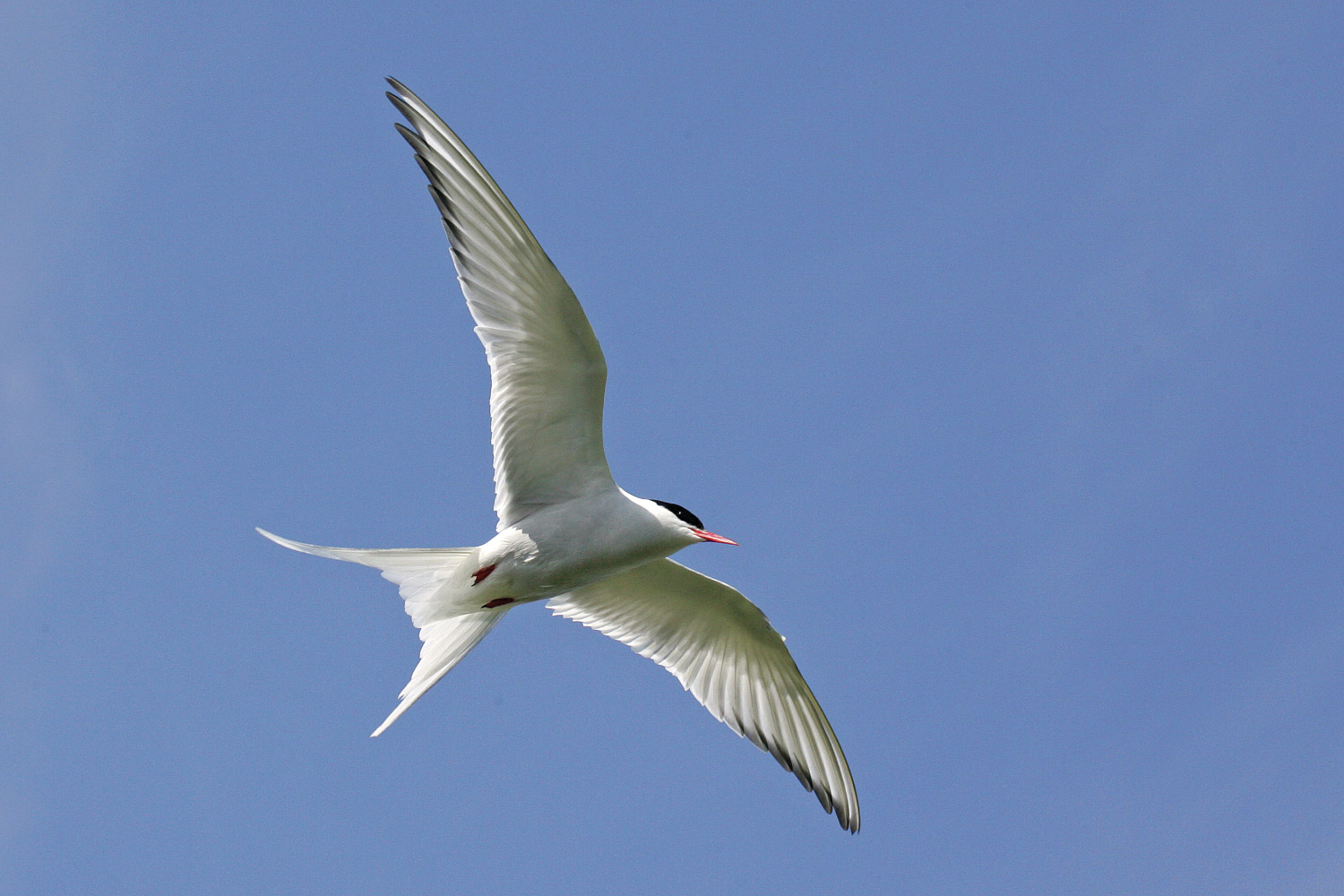 This species has a large distribution, breeding right across Europe and Asia, and also North America. It is a long-distance migrant, with British birds wintering in West and South Africa. It is the commonest of the three medium-sized tern species in most of Britain. It breeds coastally, but also inland on lakes and reservoirs, the only species in the trio to do so. Here it uses gravel islands or sometimes specially built tern rafts. Common Terns return in April and are present until September or October.

At close range, adults are most easily told by the well-known bill pattern: orange-red with a dark tip. At range and in flight, however, Common Terns look long billed (with a very subtle 'droop'), and have a long-looking head and a reasonably obvious neck. The wings are moderately broad, held sharply angled at the carpal joints, and the rear body is quite long, giving an evenly balanced profile. The tail streamers are of comparatively moderate length.

At rest, the legs are relatively long and a dull red. Although an elegant bird in the air, there is nevertheless a slightly laboured, 'rowing' feel to the wing action. The dive after fish is confident and direct.

Adult Common Terns look a rather dusky grey. The under-primaries have a broad dark trailing edge and only the inner primaries are translucent when viewed against the light. On the upperwing, the darker outer primaries contrast well and there is a thin dark 'wedge' on the trailing edge of the wing halfway along the primaries, least obvious in spring but more so in summer and autumn.

Juveniles have weak barring above, often with pronounced rusty or gingery hues (at least early in the autumn), and a prominent dark carpal bar.

This species has a wide circumpolar distribution, but at high latitudes, with Britain lying at the southern edge of its breeding range. It nests mainly in Scotland, but there are some important colonies in England, too. This species is famous as the world's most spectacular migrant bird, breeding in the far north and wintering in the southern summer. It arrives in Britain in April, at which time there might be rapid overland movements, with birds passing through lakes and reservoirs. Most depart in September and October.

At close range, the adults have a dark blood-red bill, darker than that of Common Tern, with no black tip. At range and in flight, Arctic Terns appear smaller, delicate and compact. They are shorter billed than Common Tern, with a small, rather round-looking head and a somewhat 'neckless' appearance. The wings are narrower and their shape less angular, the rear body shorter and the tail streamers very long.

At rest, the legs are strikingly short and a dull red. Unlike Common Tern, there is a real elegance to their flight. They are much more graceful and 'fairy like', more adept at surface dipping, and when fishing have a characteristic 'stepped hover', descending in stages prior to the final dive.

Adult Arctic Terns look more uniformly pale grey above, with little in the way of contrasting dark primaries, and there is no thin dark 'wedge' in the trailing edge. The underbody is slightly greyer than that of Common Tern, accentuating the contrast with the whiter 'cheek'. The under-primaries have a neat dark trailing edge and all the feathers are strongly translucent when viewed against the light. Juveniles are 'colder' looking and less gingery above than Common Tern, with a weaker dark carpal bar and, in flight, a contrastingly white triangular area in the rear wing.

This warm-water species has a large world range, but is very thinly distributed and nowhere common. It has experienced a significant decline in Britain, with just one major colony – Coquet Island in Northumberland – now remaining. British Roseate Terns winter in West Africa, arriving back in May and remaining until September.

At close range, the bill is wholly dark or with a diffuse dark red base. At a distance and in flight, the species has a long, very subtly 'drooping' bill, a long, slim head profile and a short rear body, but very long tail streamers.

At rest, the legs are moderately long and very bright red. The wings are rather short (appearing almost too short) and the flight action looks a little laboured and mechanical, with somewhat shallow, stiff wing-beats, as though the bird is always struggling to catch up. The dive for fish is usually at an angle, as though just flying into the water.

Adult Roseate Terns are gleaming white, unlike both Common and Arctic Terns, but similar to the larger Sandwich Tern. At close range, the weak pink flush to the underparts can be visible. The upperwing shows strongly contrasting dark outermost primaries, but the under-primaries are whitish with no obvious dark trailing edge. Juveniles look most like young Sandwich Terns: very coarsely scalloped above, dark in the forehead in early autumn and with black legs.

The call is an excellent way to pick up this species. Listen for the distinctive high-pitched disyllabic tchi-vik, very different from the harsh grating calls of Common and Arctic Terns and reminiscent of Spotted Redshank. 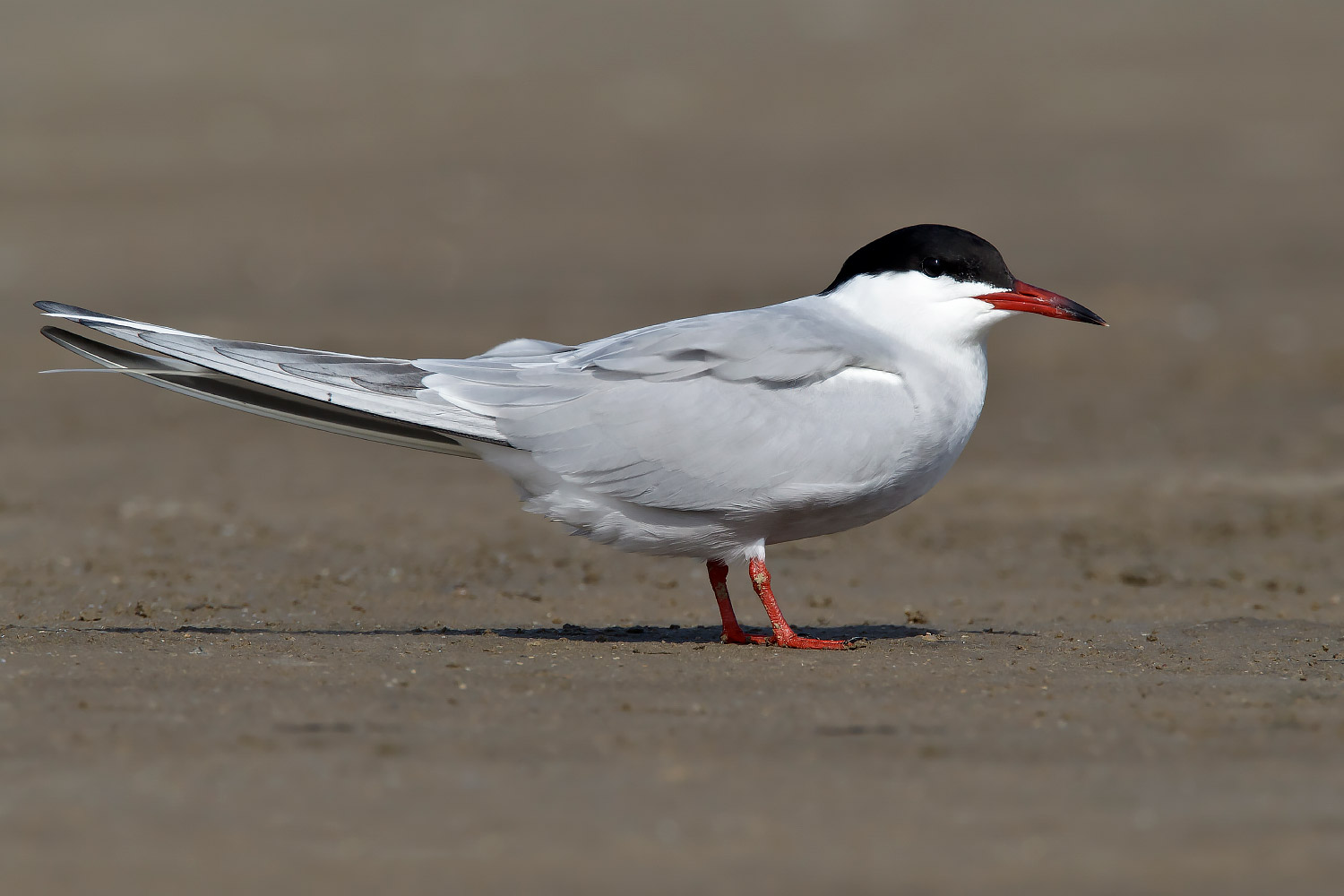 Adult Common Tern (Texas, USA, 28 April 2011). This bird is easily identified as an adult Common Tern. Note the long deep red bill with an obvious dark tip, the moderate-length red legs and tail streamers of equal length to the wing-tips. There are more subtle features here, too; for example, the rather long-looking head and the darker grey hues in the inner (but not the outer) primaries, easily visible here on the closed wing, but even more obvious as a dark 'wedge in flight (Brian E Small / www.agami.nl). 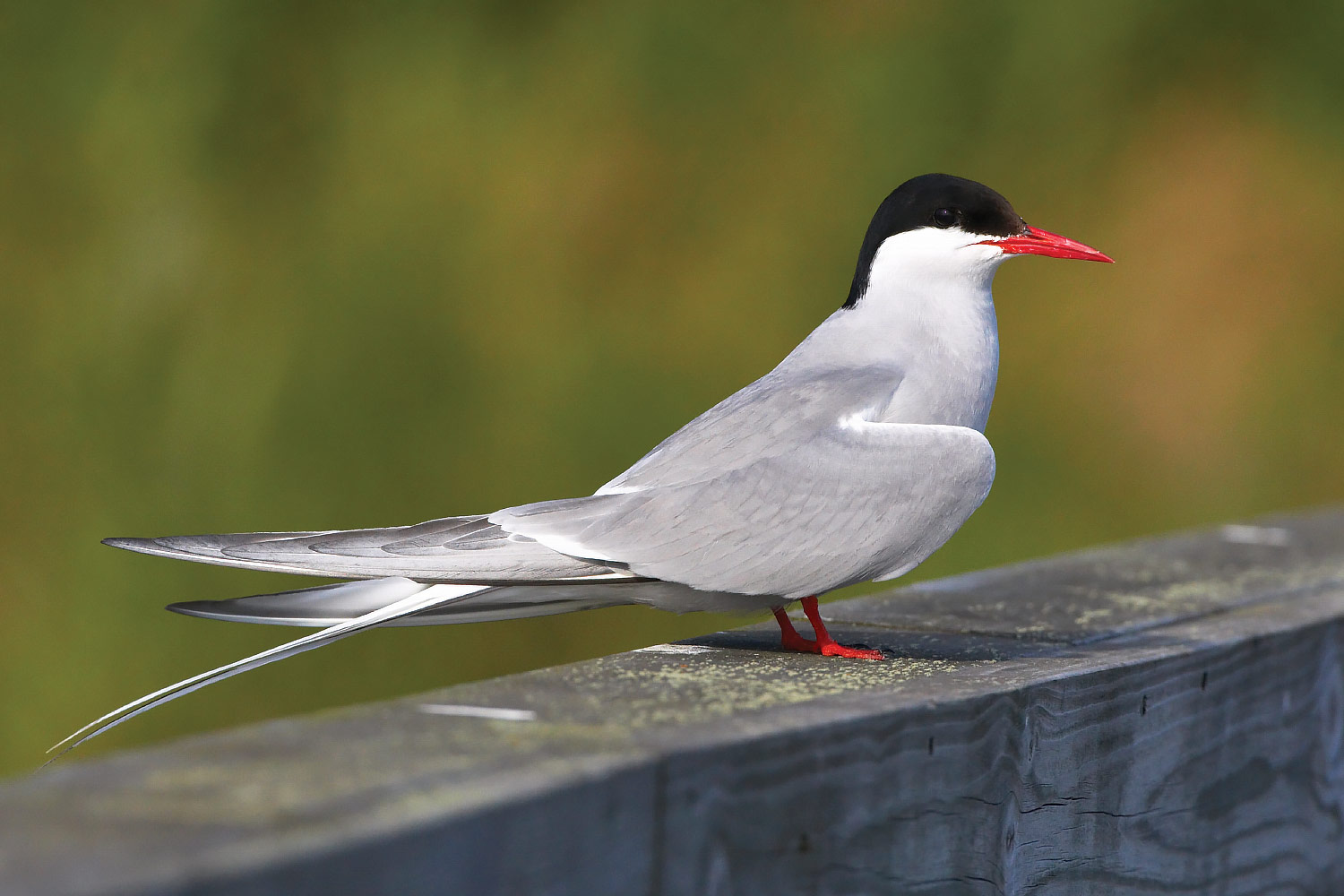 Adult Arctic Tern (Isokari, Finland, 14 July 2001). By contrast this Arctic Tern shows a relatively short wholly red bill with no dark tip, noticeably short red legs and obviously long tail streamers. Note also the rather small and rounded appearance of the head and the lack of a discrete dark area in the inner primaries on the closed wing (Jari Peltomäki / www.jaripeltomaki.com). 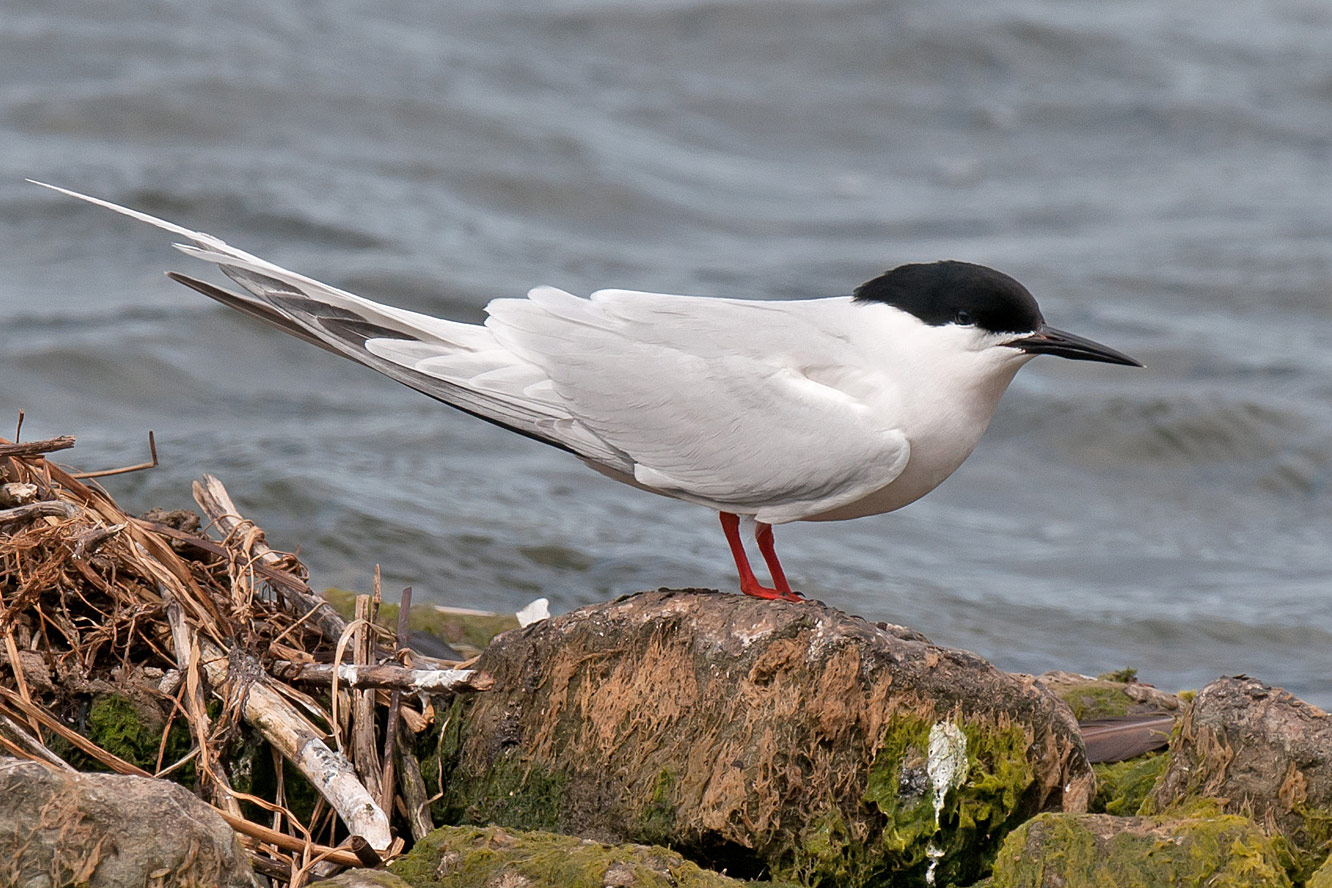 Adult Roseate Tern (Seaforth, Lancashire, 18 June 2009). The most obvious feature of this summer-plumaged adult tern is its wholly dark bill – the classic feature of Roseate Tern. There are, however, plenty of other clues visible. Note in particular the rather long bill profile, the somewhat long-looking head, the striking whiteness of the plumage (more like Sandwich Tern), the moderately long red legs and the sharp contrast on the closed wing between whitish-grey inner primaries and more solidly dark outer primaries (Steve Young / www.birdsonfilm.com). 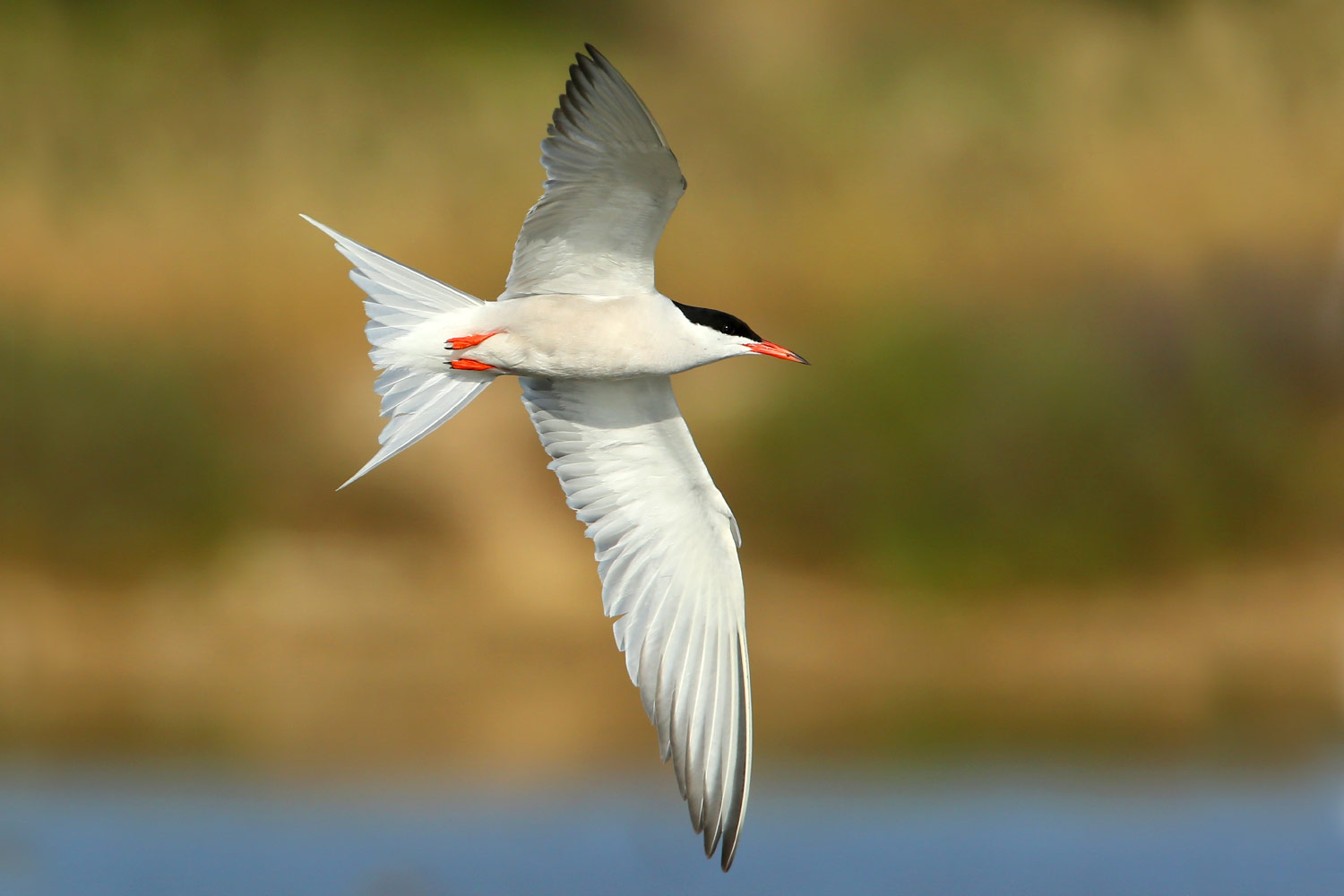 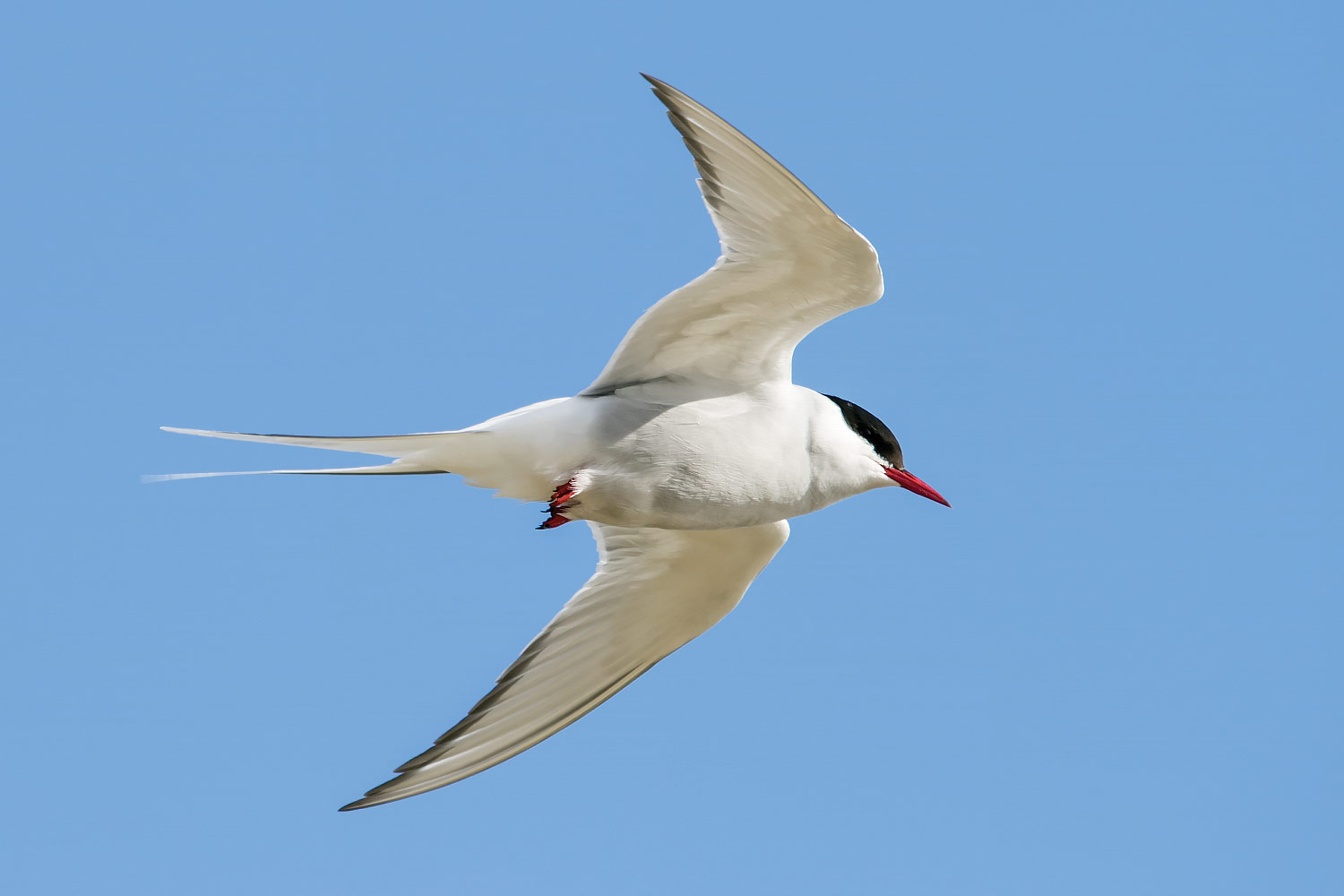 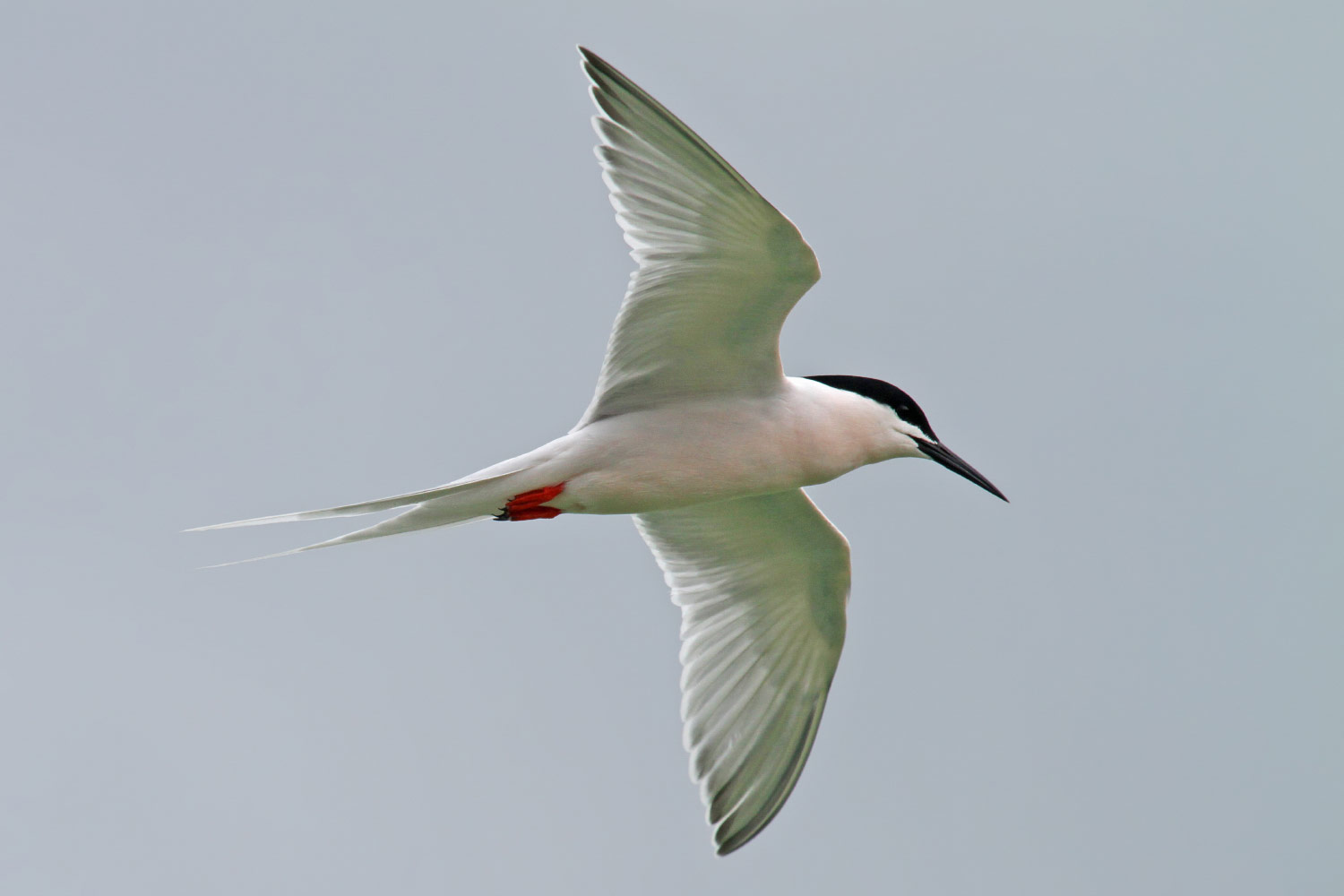 Adult Roseate Tern (Okinawa, Japan, 1 June 2011). The long, rather drooping and wholly dark bill identifies this summer-plumaged tern as a Roseate, but there are many other features too, including the typical soft pink suffusion to the underparts. Note in particular the rather long and sleek-looking head, the long tail streamers and the relatively short wings with dark outer primaries, but no dark trailing edge to the primaries (Pete Morris / www.agami.nl). 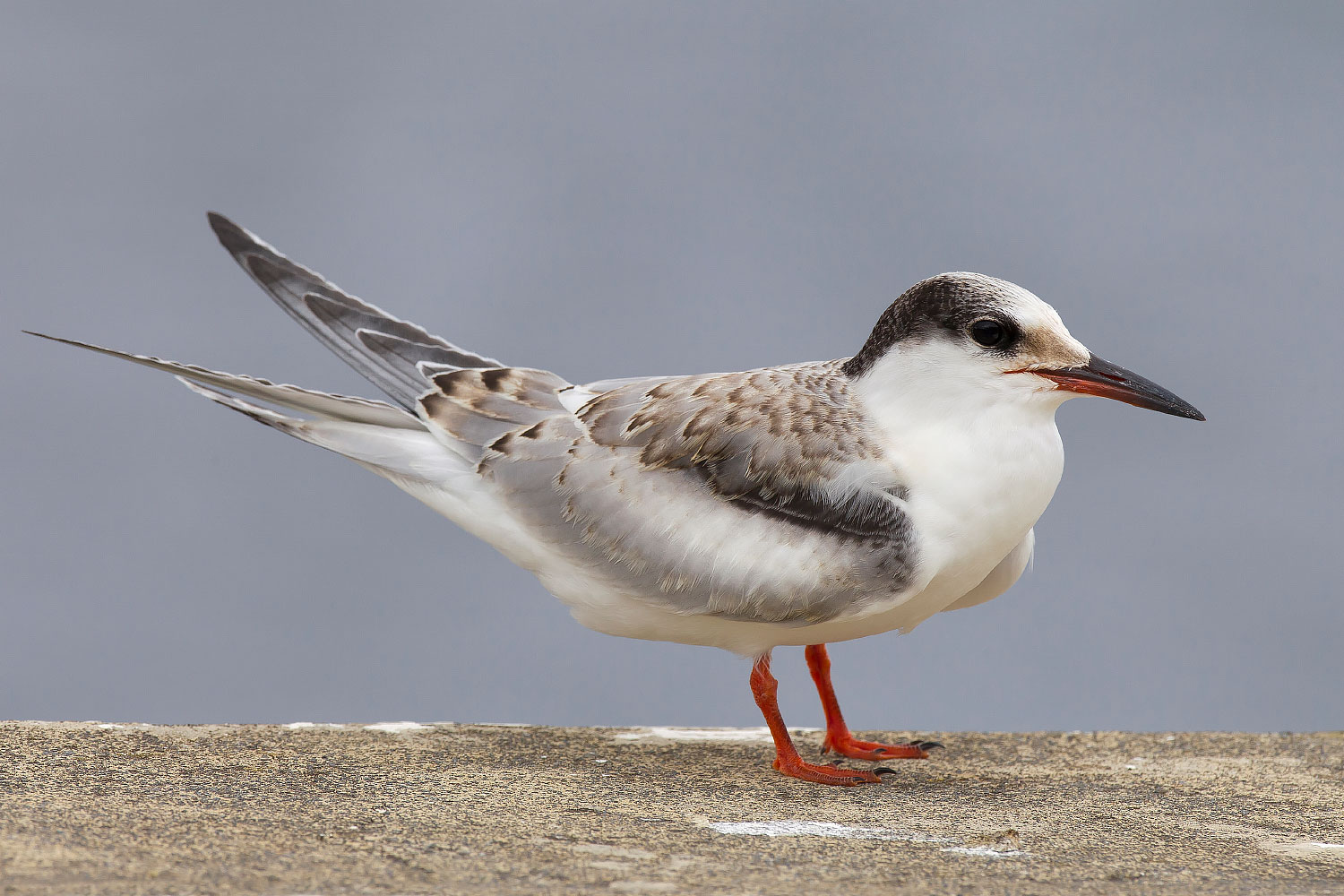 Juvenile Common Tern (Flores, Azores, 21 October 2011). The combination of ginger upperparts barring and a prominent dark carpal bar on the closed wing identify this as a juvenile Common Tern. It is also identifiable by structural clues, notably the longish bill and head and the moderately long legs (Daniele Occhiato / www.agami.nl). 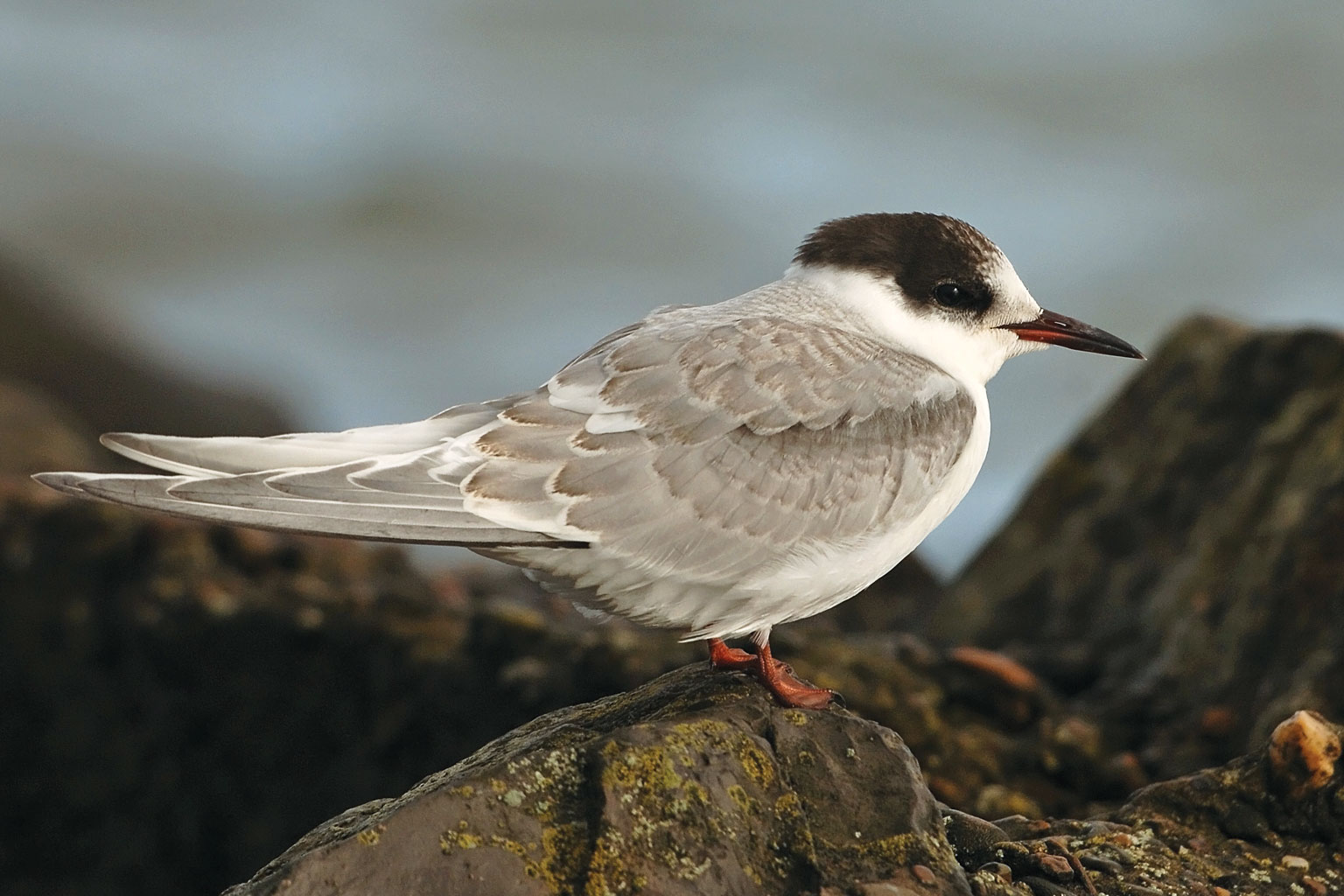 Juvenile Arctic Tern (Crosby, Lancashire, 6 November 2005). By contrast, this juvenile tern is much more petite with a short fine bill, small rounded head and short, frail-looking legs. This should be sufficient to identify it as an Arctic Tern, but note also the typical plumage features – 'cold'-looking upperparts barring with no obvious ginger hues and the lack of a prominent dark carpal bar on the closed wing (Steve Young / www.birdsonfilm.com). 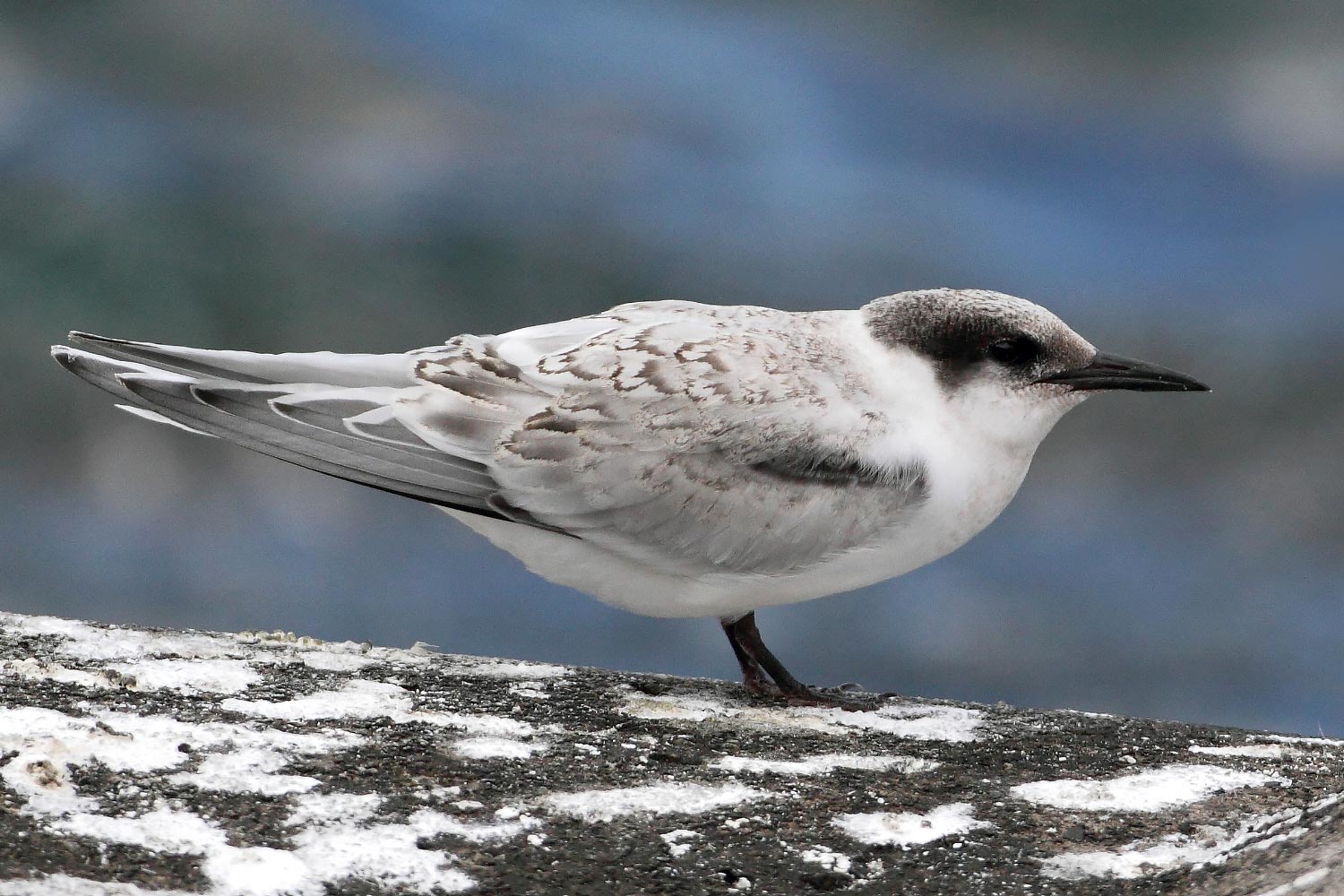 Juvenile Roseate Tern (Terceira, Azores, 1 September 2013). This juvenile tern looks very different. The bill and legs are black and the coarse dark subterminal marks in the upperparts feathers combined with the lack of any bright or ginger hues create a very Sandwich Tern-like appearance. In life, however, the smaller size (similar to Common Tern) should be apparent, while the call would also prove decisive – a distinctive, disyllabic tchi-vik, which is very different from the harsh grating calls of Sandwich Tern and rather reminiscent of Spotted Redshank (Stefan Pfützke / www.green-lens.de). 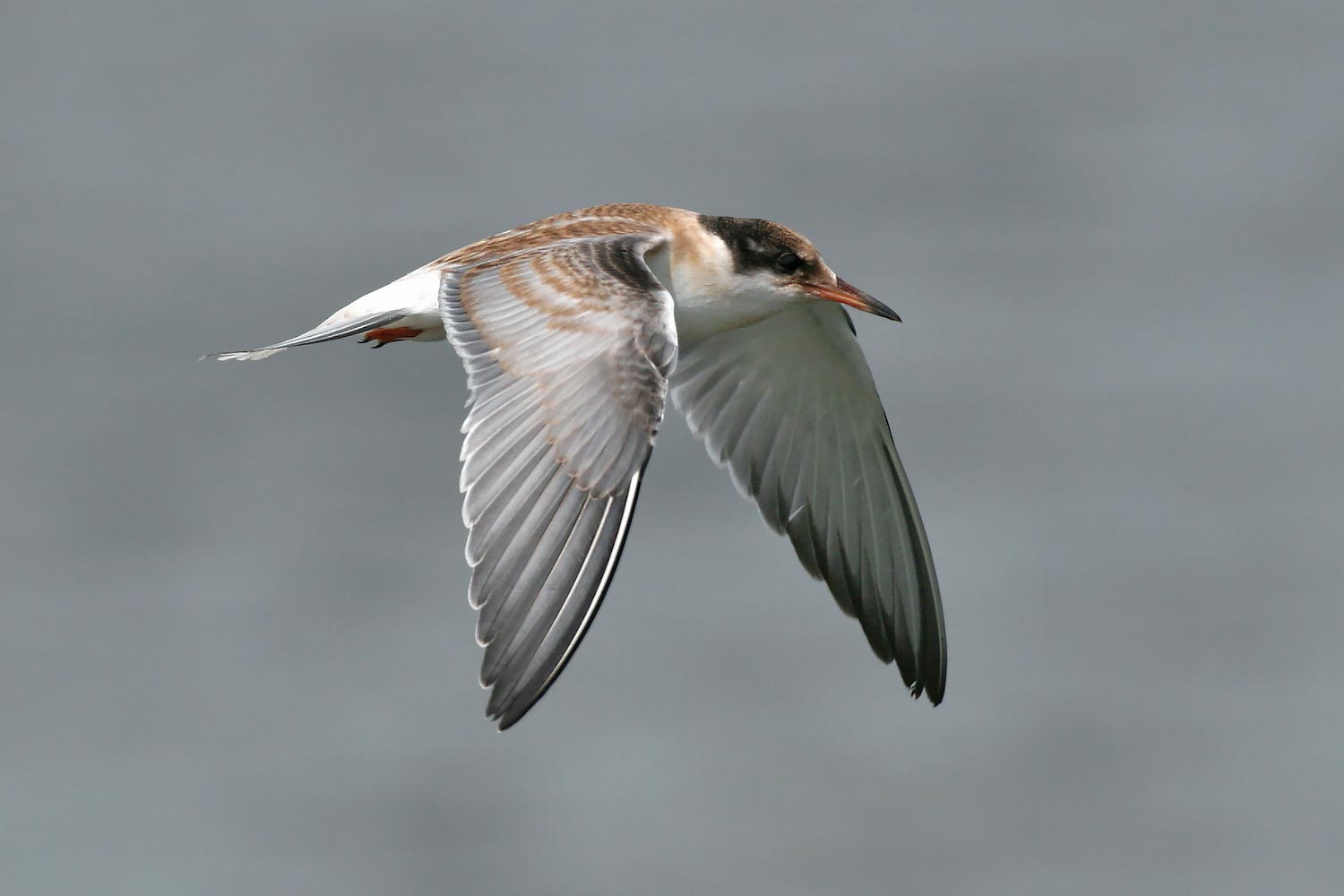 Juvenile Common Tern (Bremerhaven, Germany, 13 July 2008). The bright ginger, almost orange, hues in the upperparts and the presence of an obvious dark carpal bar make this juvenile Common Tern an easy identification. Note also the presence of a prominent dark secondary bar and, on the underwing, a broad and diffuse dark trailing edge to the primaries. The long-looking head provides a further structural clue (Stefan Pfützke / www.green-lens.de). 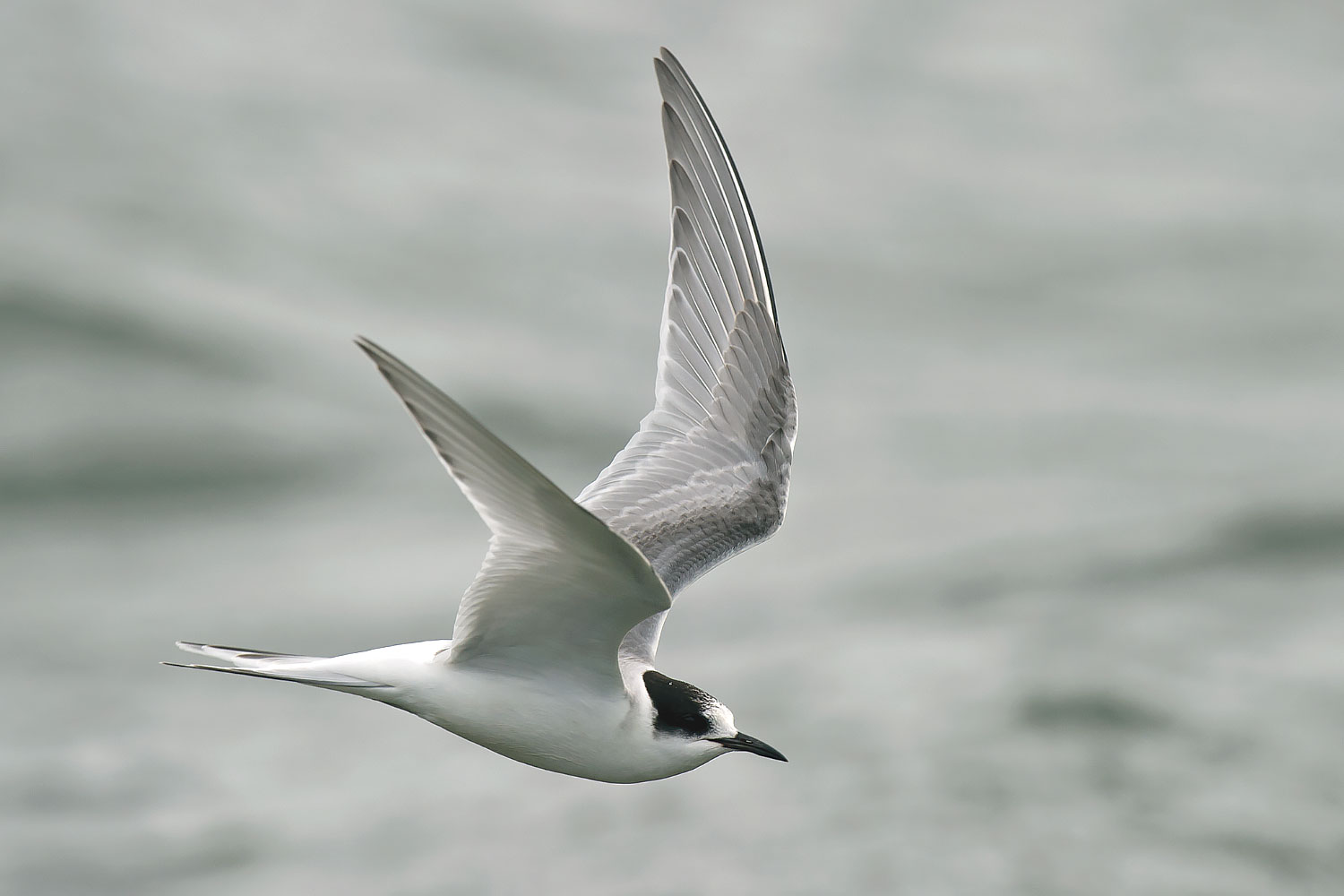 Juvenile Arctic Tern (Seaforth, Lancashire, 6 September 2011). This juvenile Arctic Tern is a very different creature with a small, rounded head, short bill and a rather more slim and elegant appearance. Note also the 'cold'-looking upperparts lacking any ginger hues, the absence of a prominent dark carpal bar or secondary bar, a rather whitish appearance to the rear of the wing and, on the underwing, a thin dark trailing edge to the primaries (Steve Young / www.birdsonfilm.com). 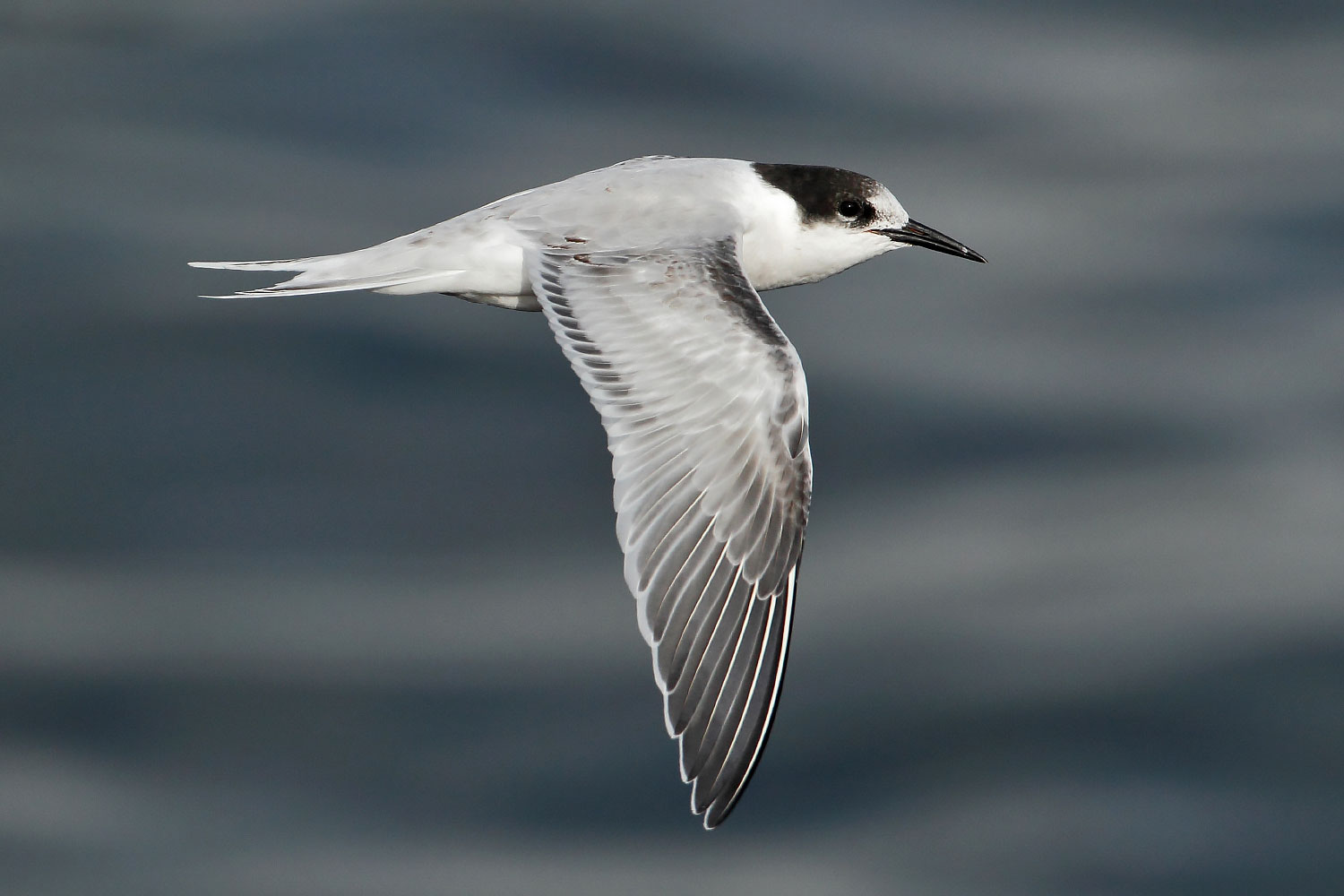 Juvenile Roseate Tern (Terceira, Azores, 1 September 2013). This young Roseate Tern has moulted its mantle and scapulars and now shows the uniform grey upperparts of first-winter plumage. The bird can still be identified, however, by the combination of long-looking head and bill, dark carpal and secondary bars and the lack of a whitish hindwing (thereby eliminating Arctic Tern) and the 'cold' plumage hues (thereby eliminating Common Tern). Note again how, as is typical in this species, the wings look rather short (Stefan Pfützke / www.green-lens.de).