Separating Common Chiffchaff and Willow Warbler is a perennial challenge, particularly in spring when many migrants arrive and begin to establish breeding territories. Add to this the modern awareness that the recently split Iberian Chiffchaff can be present as a cryptic overshoot, occupying a no-man’s land appearance-wise which makes it easily confusable with the other two species, and you have the perfect storm of an ID headache. Fear not – Andy Stoddart is here to help you differentiate between all three with confidence. 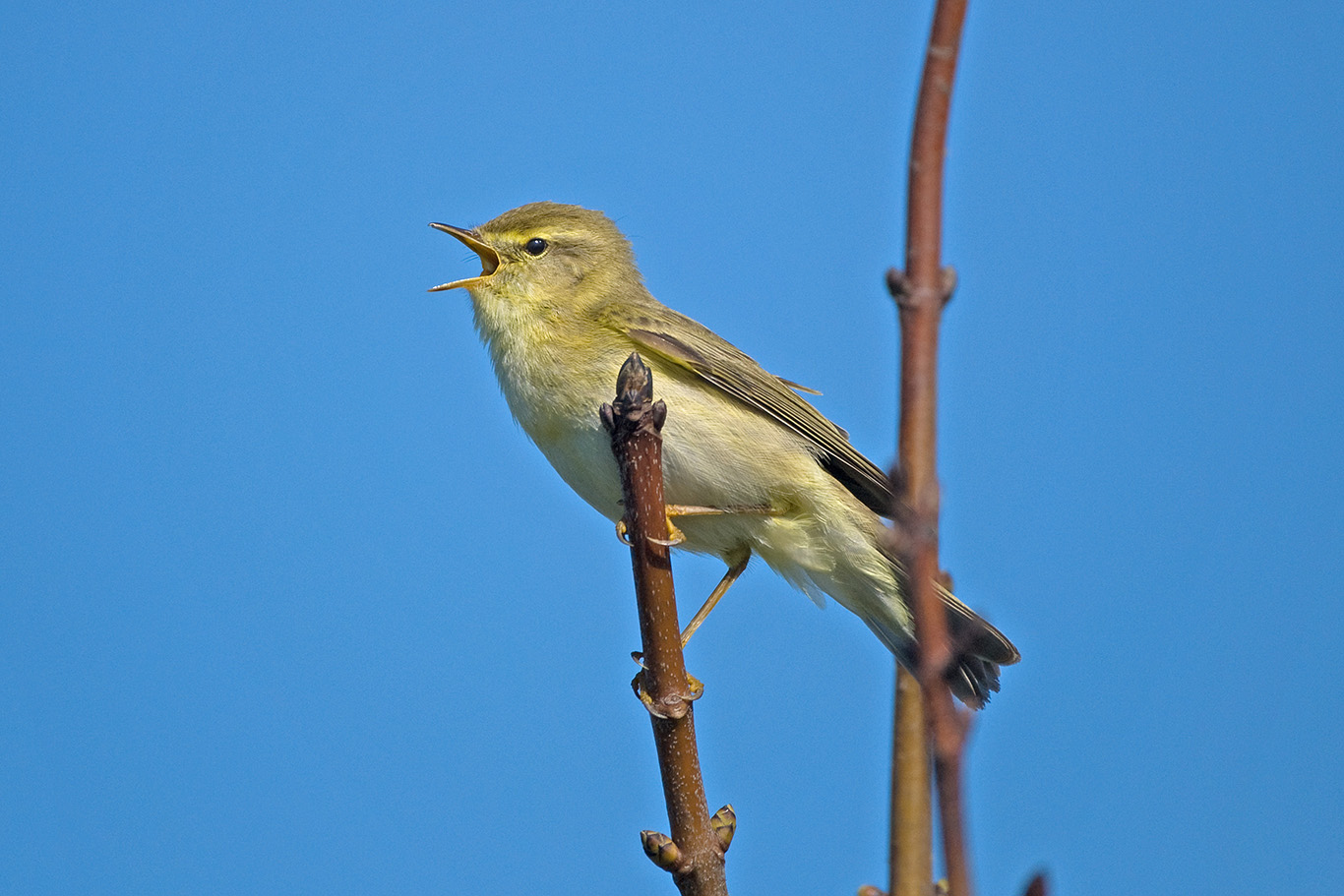 Willow Warbler (Hightown, Lancashire, 26 April 2007). There is perhaps no more enchanting song than that of Willow Warbler. Freshly arrived, this bird is in full voice, filling the air with its silvery cadences. In life its identification would be straightforward, but there are plenty of visual clues here to this bird’s identity as well. The beautiful bright green and yellow hues are typical of Willow Warbler, as are its strong face pattern comprising a bold supercilium but relatively unmarked ear coverts and weak eyering. The wing structure cannot be seen properly thanks to the branch in the foreground, but the pale orangey legs are readily visible (Steve Young/www.birdsonfilm.com).

The species pair of Willow Warbler and Common Chiffchaff is one of the classic identification problems. While many individuals are straightforward to separate with practice, the occasional bird can still perplex even the most experienced birder. And nowadays there is another challenge: Iberian Chiffchaff. Only recently recognised as a full species, it is being found annually in Britain. It combines the appearance of both Willow Warbler and Common Chiffchaff; indeed so similar is it to its siblings that at present acceptance relies on its distinctive song or call.

This is a very common species across a very large breeding range which extends from Ireland in the west to Siberia in the east. There are a number of subspecies, but those of most relevance are the nominate of westernmost Europe and abietinus of Scandinavia and western Russia. Distinctions between the two are small: some eastern abietinus appear a little paler and greyer, but many are indistinguishable from collybita.

Common Chiffchaff is not such a great migrant as Willow Warbler, with many wintering north of the Sahara, particularly around the Mediterranean, but small numbers also in southern Britain. It is a widespread (and increasing) breeder in Britain, most arriving early, in March, and departing mid-autumn. Continental migrants occur regularly, too. Any ‘Willow/Chiff’ encountered in winter will almost certainly be this species.

In keeping with its much shorter migration, Common Chiffchaff has a shorter, more rounded wing with a shorter primary projection than that of Willow Warbler – generally half to two-thirds the length of the tertials.

Many are drabber than Willow Warbler, slightly less bright green above and more sullied on the underparts, particularly on the flanks. The face pattern is plainer, with a less marked loral line and eyestripe, a weaker supercilium, more sullied ear coverts and a prominent eyering which dominates the face and gives a more ‘spectacled’ expression. The legs are typically dark but can appear paler on some birds.

The song is the familiar metronomic chiff chaff, but the species possesses a variety of calls. These include a strongly upwardly inflected hooeet and a downwards-inflected sweeoo, heard mainly (but not exclusively) from young birds in autumn.

This species breeds almost exclusively in the Iberian peninsula. It occurs in Britain primarily as an ‘overshooting’ vagrant, with many records involving long-staying birds singing and defending territories. It is almost always the song that first attracts attention to this species.

Unlike many vagrants, which are typically found mainly at coastal migration sites, Iberian Chiffchaffs are often seen at inland sites. To date almost 50 have been discovered in Britain, mostly singing males in April and May, and with a preponderance of records in the south. Remarkably, a pair bred in Glamorgan in 2015 and raised seven young.

In structure, Iberian Chiffchaff resembles Common, although it appears fractionally longer billed and a little longer winged. In these respects it resembles Willow Warbler. However, the structural differences from Common Chiffchaff are small and, even in the hand, biometrics have recently been shown to be inconclusive.

Its plumage is more reminiscent of Willow Warbler: a brighter mossy green above and more yellow on the face, throat, upper breast and undertail coverts. It has a bolder face pattern with a stronger supercilium and a weaker eyering. In practice, therefore, it is just as likely to be identified as a Willow Warbler as a Common Chiffchaff. Again, however, the differences are small and unlikely to be conclusive in a vagrant. The legs are generally dark brown.

Songs and calls are key. The typical song comprises three elements: an initial series of notes followed by a characteristic rising weet weet and then a rushed succession of notes of the same pitch – chiff chiff chiff weet weet cha cha cha cha cha. This typical ‘advertising’ song is distinctive and very different from both Common Chiffchaff and Willow Warbler. However, the ‘conflict’ song of Iberian Chiffchaff closely resembles that of Common and birds may switch between the two song types.

There is also the phenomenon of ‘mixed singing’, not a reference to such switching but to those birds which incorporate both Common and Iberian Chiffchaff elements into the same song. Many such birds are considered to be hybrids from the narrow zone in the western Pyrenees, but some may also be pure individuals of one species which have learnt the song of the other. The call is distinctive: a high-pitched soft, descending tseeeu reminiscent of Siskin or Reed Bunting.

This is a very common species across a very large breeding range extending from Ireland in the west to eastern Siberia in the east. There are three subspecies, though the distinctions between them are subtle and clinal. Those in westernmost Europe belong to the nominate subspecies, those in Scandinavia and western Russia to acredula, with the furthest eastern birds referred to as yakutensis. All winter in sub-Saharan Africa. It is a common breeder in Britain (although now declining across southern England), arriving in April and departing in early autumn. Continental migrants occur regularly, particularly along North Sea coasts. Winter records are extremely rare.

As befits a long-distance migrant, it has a long and rather pointed wing with a primary projection just shorter than or as long as the tertials. It is a ‘green-and-white’ bird in spring, with autumn juveniles being very yellow below. Birds with duller grey or brown hues occur in all three subspecies, but are commoner in acredula and typical in yakutensis. Willow Warblers have quite an ‘intense’ expression – a function of a well-developed loral line and eyestripe and long and well-defined supercilium. The ear coverts are relatively plain and pale and the eyering is not prominent.

Leg colour is the classic identification feature. Bright orangey legs indicate a Willow Warbler, although some are dark legged, and the identification of such birds should rely on other features.

The song is the familiar silvery cadence, with the call a rising hweet confusable with that of Common Redstart. 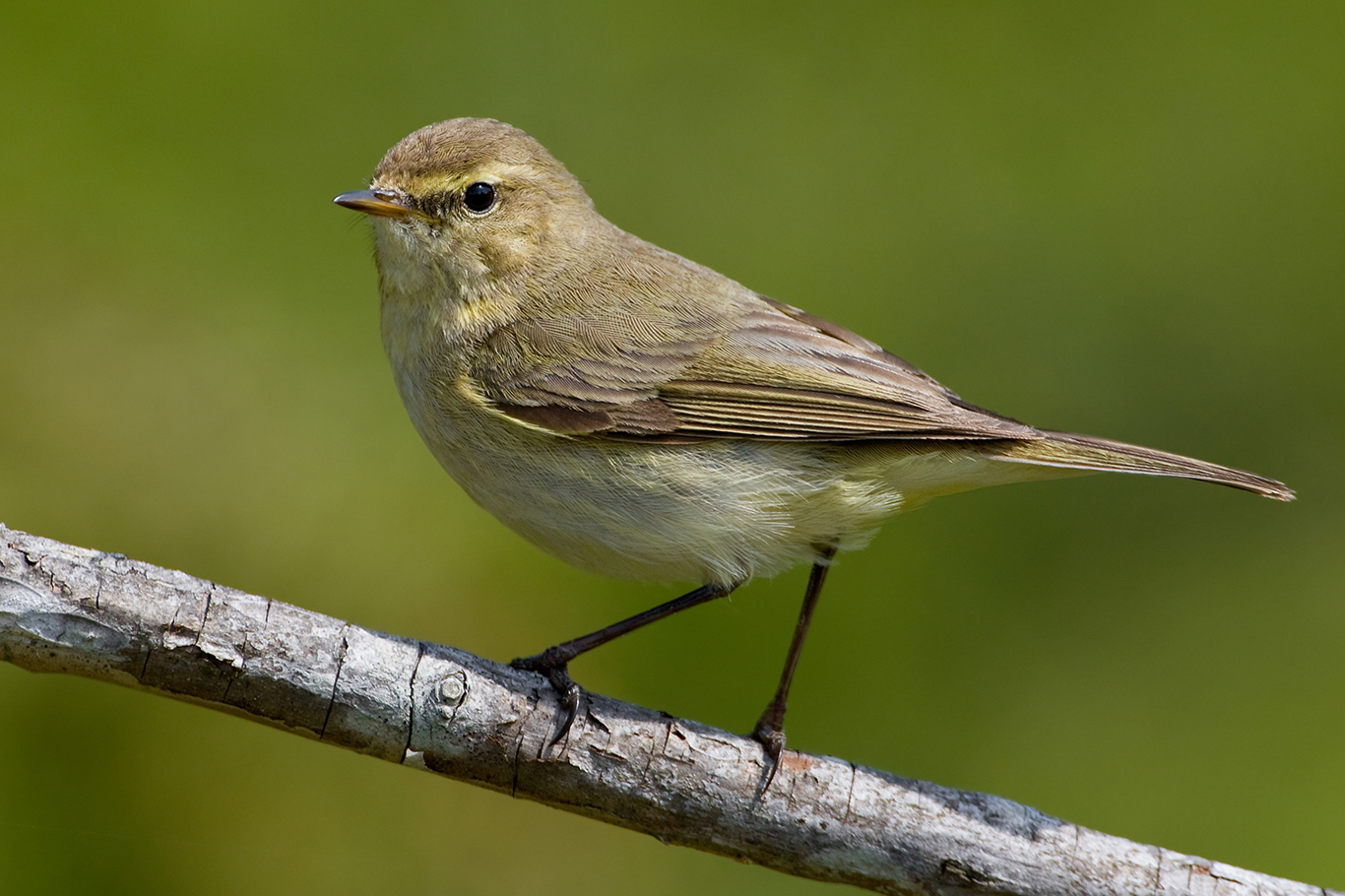 Common Chiffchaff (Firenzuola, Italy, 1 May 2008). The dark legs immediately catch the eye in this image – a clear pointer to Common Chiffchaff. Some Willow Warblers are dark legged, however, so additional features are needed. Fortunately, this individual offers numerous further clues. Most important is the wing structure, comprising a short primary projection which here can be seen to be significantly shorter than the tertials. ‘Softer’ features can be found in the face pattern. The supercilium is relatively weak, the eyering is quite prominent and the ear coverts are strongly washed olive. The result is a ‘softer’ and less ‘intense’ expression than that of Willow Warbler (Daniele Occhiato/www.agami.nl). 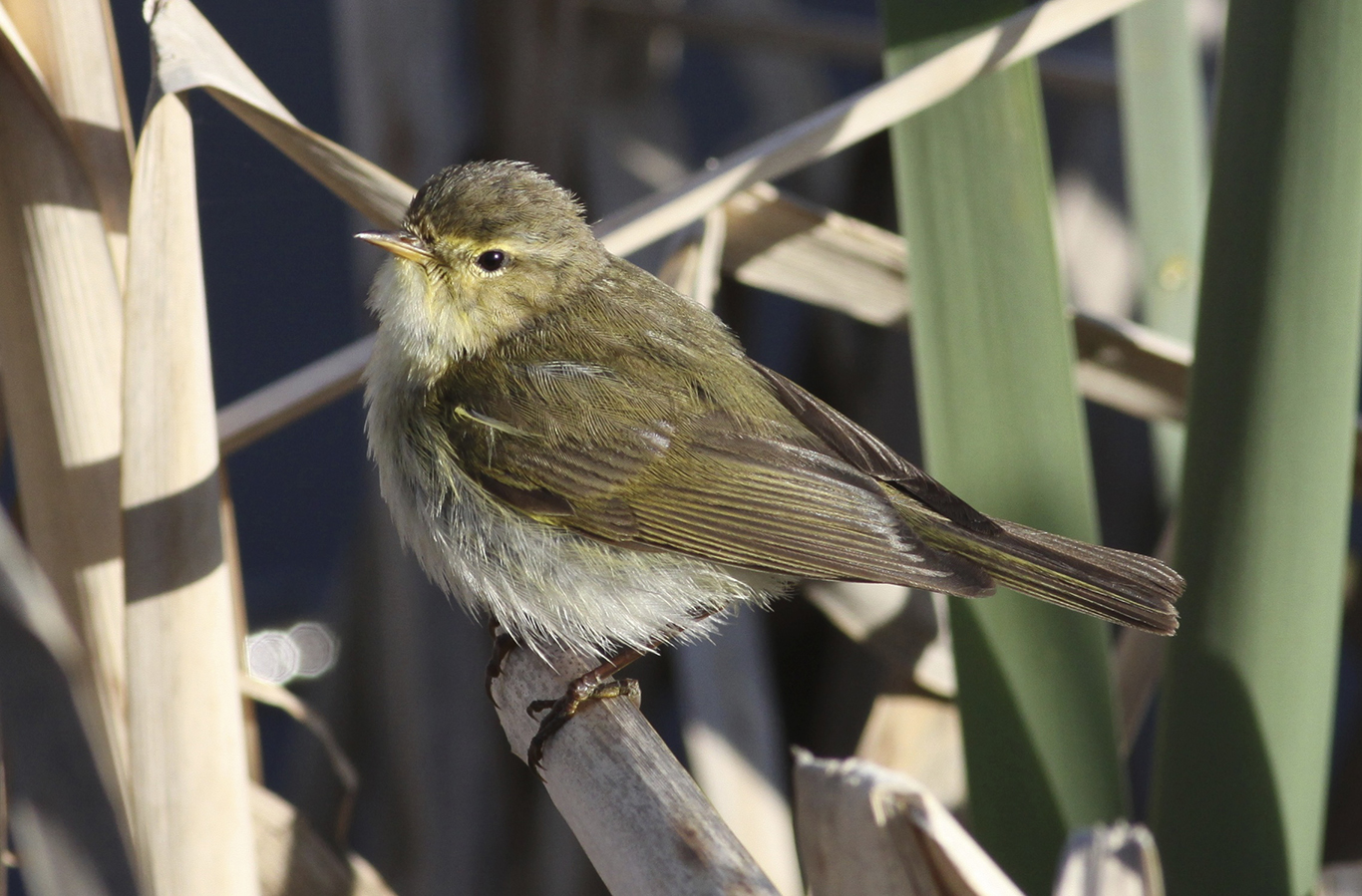 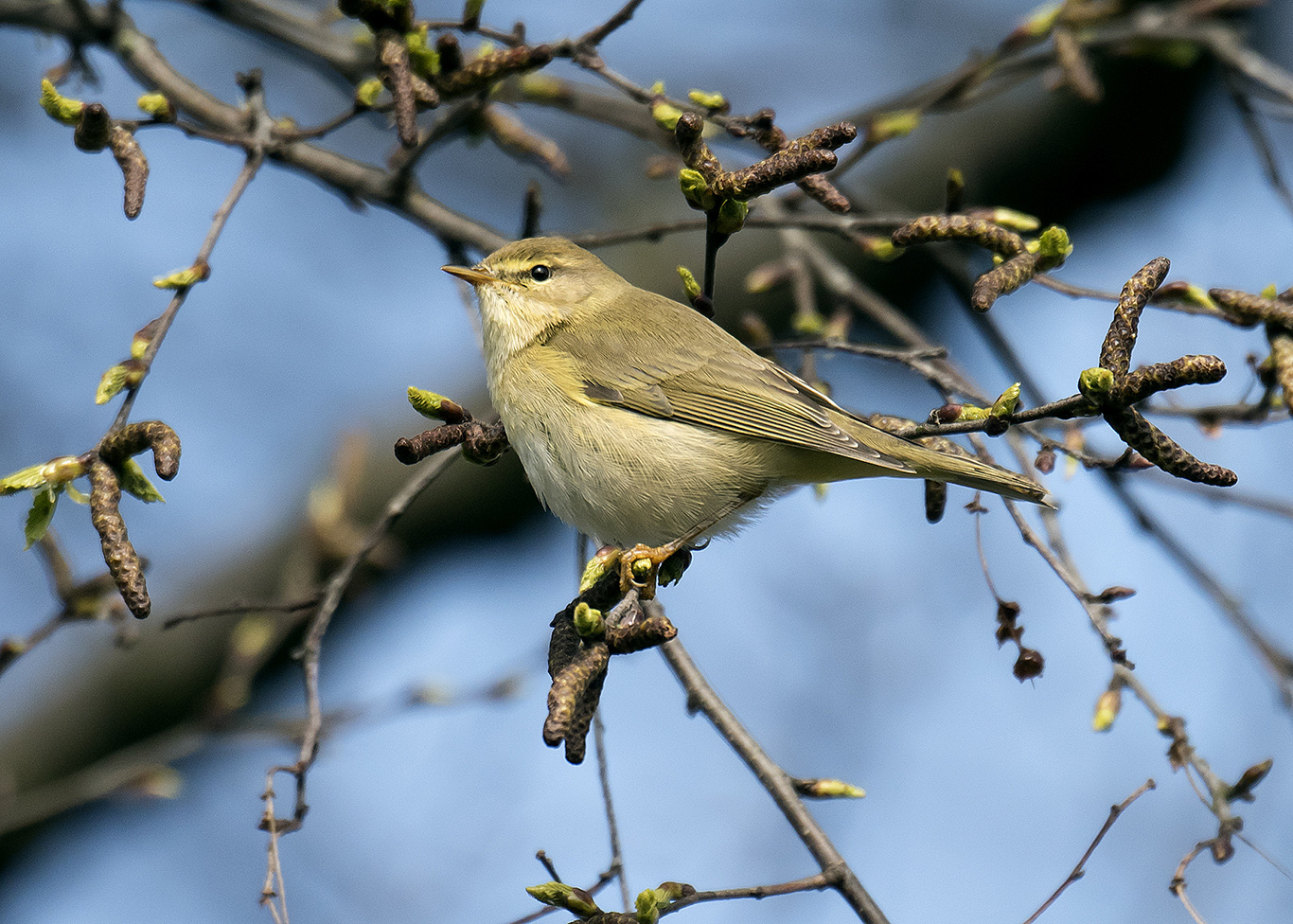 Willow Warbler (Liverpool, 7 April 2015). The clean bright plumage hues of this bird coupled with the strong supercilium, pale ear coverts and weak eyering immediately suggest Willow Warbler, a diagnosis which can be readily confirmed by reference to its orangey legs and, in particular, to its noticeably long primary projection, here easily as long as the tertials. The increasing spacing between the primary tips (not shown on Common Chiffchaff) also indicates that the wing is quite pointed as well as long – typical for a long-distance migrant (Steve Young/www.birdsonfilm.com). 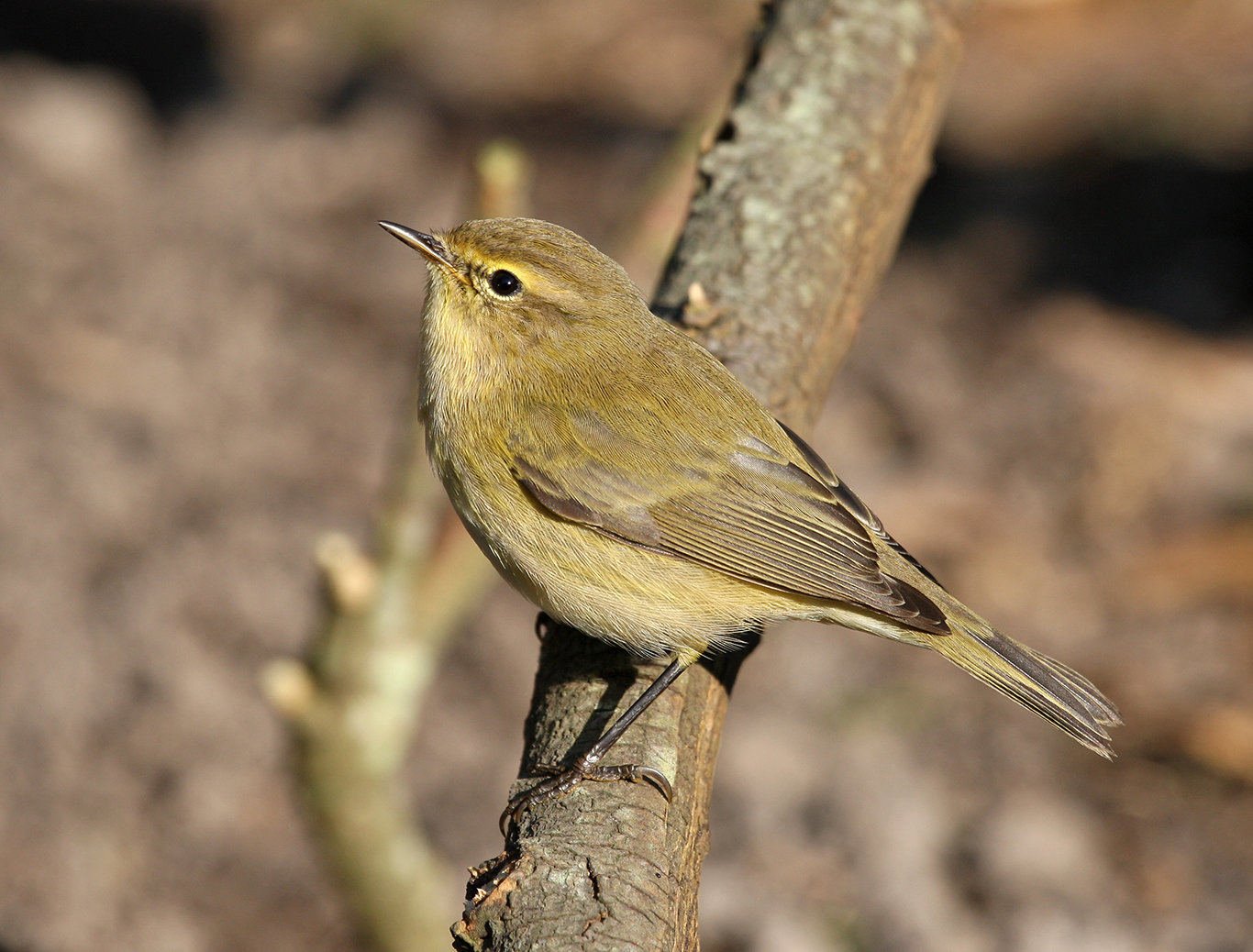 Common Chiffchaff (Ouessant, France, 28 September 2008). This lovely portrait showcases all the classic features of Common Chiffchaff. These include rather ‘swarthy’ olive plumage hues and a weak face pattern with a poorly defined supercilium, strongly olive-washed ear coverts and a prominent eyering. The primary projection is short, with the closely bunched primary tips indicating the rather rounded wing of a short-distance migrant. Finally, the legs are clearly blackish (Aurelien Audevard). 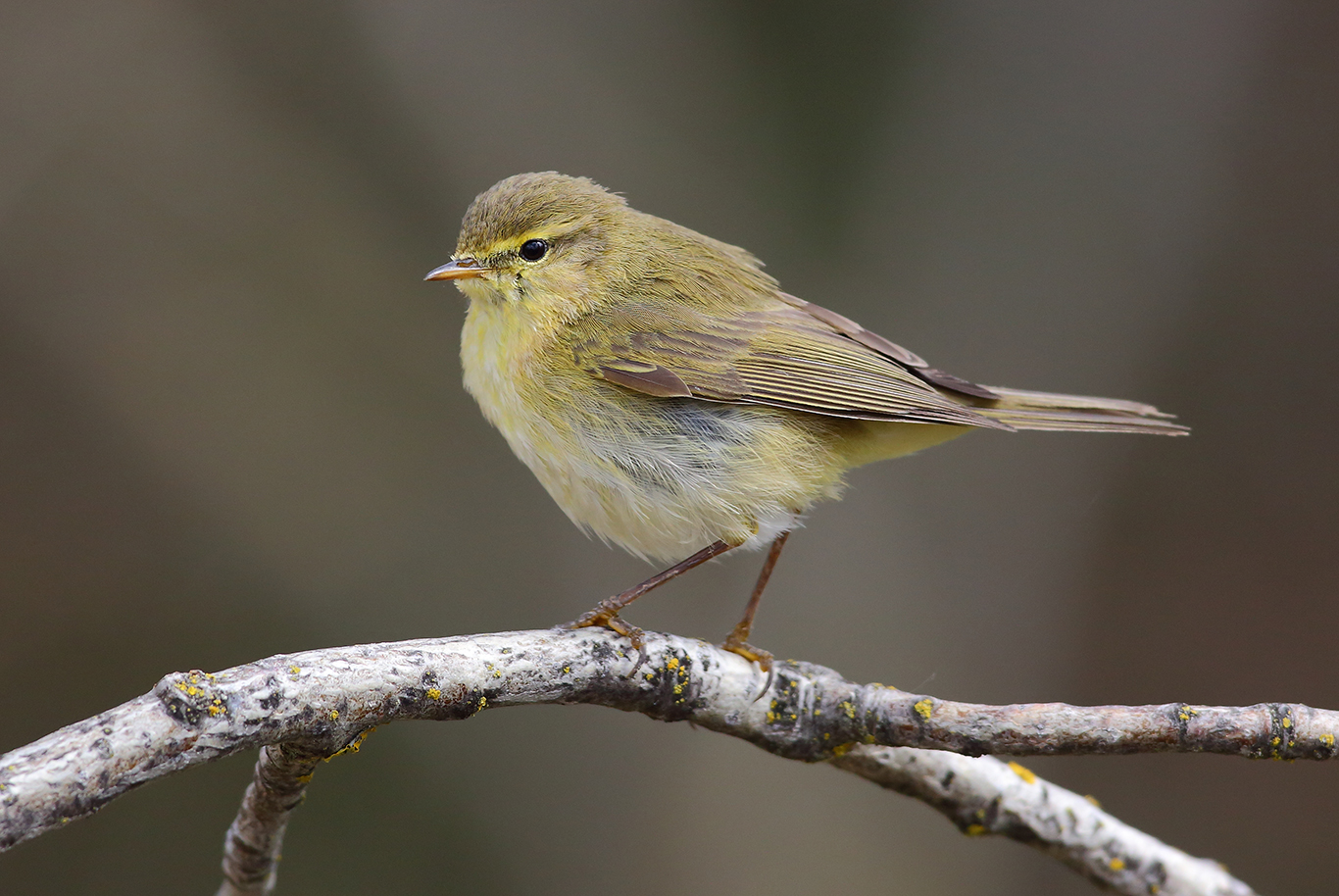 Iberian Chiffchaff (Valladolid, Spain, 22 March 2016). Rather like the bird in photo 3 (page 35), this individual gives somewhat contradictory clues. With its bright green upperparts, pale ear coverts and weak eyering, it most resembles a Willow Warbler, and the legs, too, are pale. However, the primary projection is on the short side. This is in fact another Iberian Chiffchaff but, in Britain, songs or calls would be required to prove it. The yellow wash on the face and undertail coverts is typical of Iberian Chiffchaff, but is hardly diagnostic (Carlos Bocos). 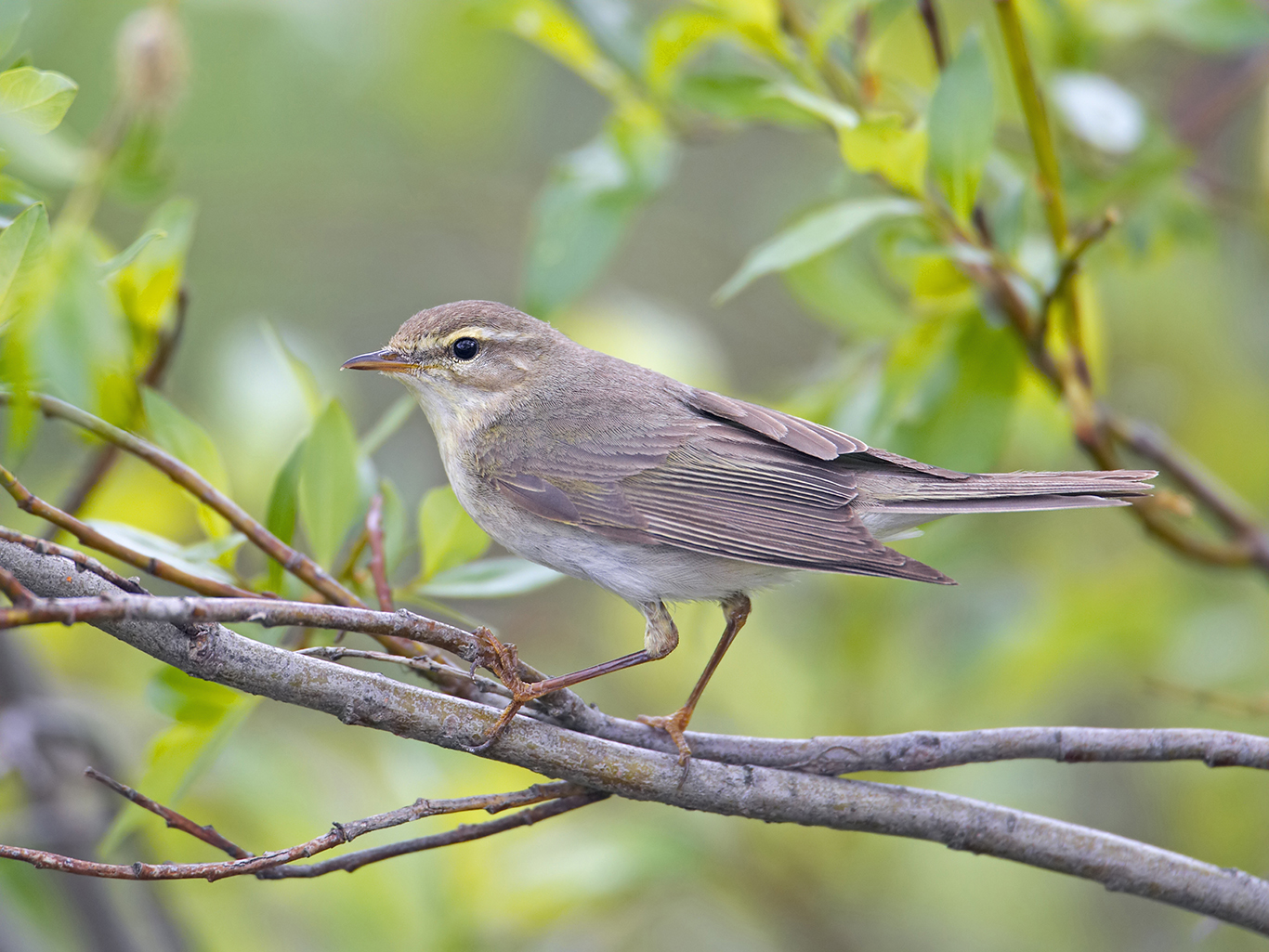 Willow Warbler (Kuusamo, Finland, 9 June 2007). Based on the face pattern, wing structure and leg colour, this is clearly a Willow Warbler. It lacks, however, the bright green and yellow hues typically seen on the species in Britain. This much paler and greyer plumage (lacking both green and yellow) can be shown by birds throughout the northern part of the range (even in Scotland), but it is most typically found in birds from further east, in Scandinavia and Russia. These latter birds are of the continental subspecies acredula (Markus Varesvuo/www.birdphoto.fi).