Colourful songbirds could be traded to extinction

Uniquely coloured songbirds are at high risk of extinction because they are in demand as pets, research has shown.

The pet songbird trade in Asia has already driven several species close to extinction, with birds targeted primarily for their vocalisations. Now a study has revealed that particular colours of plumage put birds at greater risk of being taken from the wild and sold. 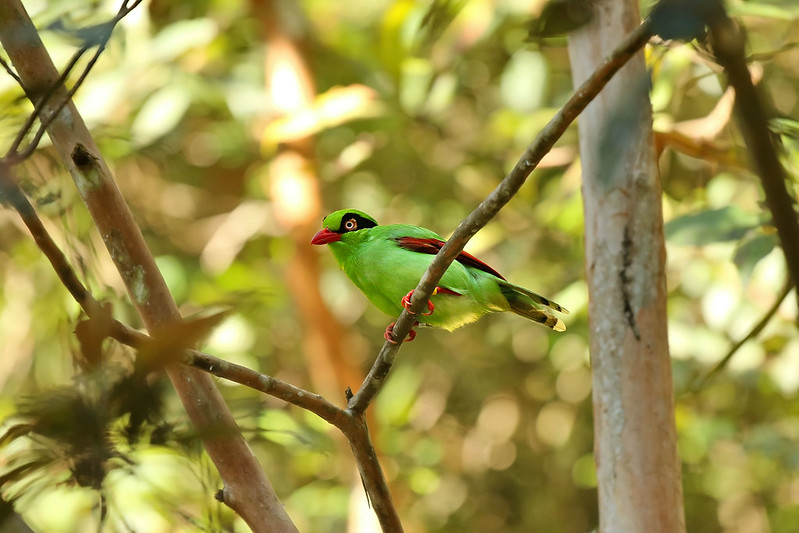 Species with bright colours, such as Bornean Green Magpie, are more likely to be stolen from the wild (Hiyashi Haka).

Researchers say breeding birds in captivity for the trade could help. "That won't work for all species," said lead researcher Professor Rebecca Senior, from the University of Durham. "But there's hope that we could shift the sourcing [of some pet birds]; so they're captive-bred rather than caught in the wild."

Supplying, rather than fighting, the songbird trade might prove controversial, but these researchers say it could be a practical way to prevent species from being lost from the wild.

The study, published in the journal Current Biology, also showed that if the most desirable birds continued to be taken from the wild, the populations left in Asia's tropical forests would gradually become "more drab". The most striking, uniquely coloured birds would be the first to be lost.

To understand the threats to wild birds, Prof Senior and her colleagues carried out what was essentially a stocktake of the species – and the colours – most commonly bought and sold in the songbird markets of Asia.

"We found that species that had a more unique colour, something not similar to other birds, are more likely to be traded," she explained. And there are particular categories of colour that tend to be more common in the trade; azure (sometimes described as sky blue) and yellow. Pure white is quite common, too."