Last spring a Whimbrel was fitted with a satellite tag at the Wheldrake Ings staging site in North Yorkshire. 'Wally' has since wintered in W. Africa and is due to depart the wintering area soon. Find out more about the project and how you might be able to help with your Whimbrel sightings this spring.

Every year several thousand Whimbrels are seen passing through Britain during April and early May as they move northwards from their wintering grounds in Africa. Some of these birds stay for a while to feed at traditional staging areas before continuing on to the main breeding grounds in Iceland and Scandinavia.

A well known Whimbrel staging area at Wheldrake Ings, in the Lower Derwent Valley NNR 15 km south east of York, has been monitored annually since 1987. Initially, most of the observations were counts of the birds arriving to roost at Wheldrake Ings. However, recently the level of research has intensified.

Thirteen Whimbrels have been colour-ringed during the last two spring passages. The purpose of the colour-ringing is to help determine how long the birds stay at the site and to discover if they roost at Wheldrake Ings in successive years. 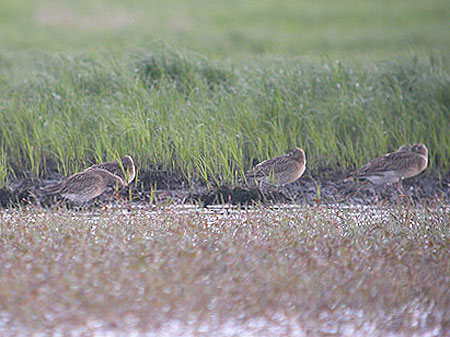 Previously, very little was known about the length of stay of individual Whimbrels at migratory roost sites. Results so far indicate that the average length of stay is longer than was previously thought. In 2005 one bird stayed in the Wheldrake area for two weeks.

There have been two previous colour-ring projects in the recent past. In the 1980s Murray Grant colour-ringed birds at breeding sites in Shetland. His results showed that 90% of the birds ringed during one season reappeared the following year with most of the birds returning to nest at the same study site. Whimbrel are long-lived birds and it is just possible that some of these birds could still be seen on passage through the UK.

More recently Tomas Gunnarsson colour-ringed birds at breeding sites in south-west Iceland. One of these birds, ringed in 1999, was seen at the Brockholes Quarry roost site in Lancashire on 24 April 2004. This sighting provides further evidence that many of the UK passage birds continue northwards to breed in Iceland.

The birds ringed at Wheldrake have a colour-ring above the left knee and a metal BTO ring below. On the right leg there are two colour-rings above the knee and all the birds have an orange ring below the knee which indicates that it belongs to the current project. In the field the rings below the knee are often out of sight, especially when the birds are amongst thick vegetation or standing in water. The photo below, taken in late evening light through a telescope, shows a typical view though only the left leg can be seen. 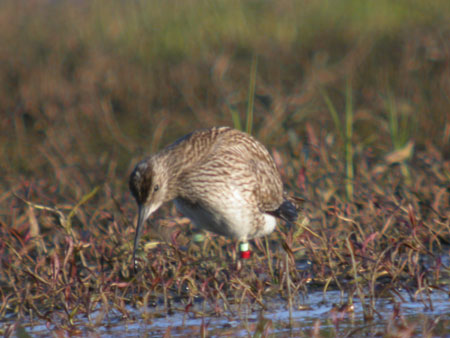 Large numbers of Whimbrel will soon be passing through the country. The birds arriving at Wheldrake Ings will be closely monitored by the study group. If you see any colour-rings, ranging from just one to the full set, on a Whimbrel we would be very grateful if you would inform info@whimbrel.info with your observation. We will forward any record to the BTO, who have an oversight of the projects, and send you the known life history of the bird.

PS. As part of the Wheldrake study a bird, now known as 'Wally', was fitted with a satellite tag in May 2005. 'Wally' initially migrated to Iceland where it was presumed to have bred. Last autumn 'Wally' migrated to W Africa where he arrived on 30th August 2005. The tag is still working and details of the continuing journey of 'Wally' can be found at www.whimbrel.info.