Climate change is causing wind patterns to change in the Southern Ocean. Higher wind speeds enable the Wandering Albatrosses of the Crozet Islands to travel more rapidly in search of food. This is the conclusion reached by researchers from the Centre d'Etudes Biologiques de Chizé (CEBC). The phenomenon has modified the distribution of these seabirds and improved their physical condition as well as their breeding success. However, this favourable situation is unlikely to last if these windy areas continue to move southwards.

The effect on animal populations of changes in wind patterns caused by global warming has been little studied. In the Southern Ocean, these changes have been substantial: westerly winds have increased in intensity and gradually moved southwards over the past thirty years. Some seabirds, such as albatrosses, use the wind as a source of energy when they fly. By considerably reducing their energy expenditure, the wind enables them to fly huge distances, thousands of kilometres from their nests. How have these changes in wind patterns affected albatrosses? To find the answer to this question, the researchers used several long-term studies carried out in the Crozet Islands, where the demography (annual breeding success and survival) of the albatross population has been continuously studied by CEBC for nearly 40 years. Scientists have also monitored the birds' size (biometric monitoring) and physical condition (weight). In addition, telemetric monitoring has been performed since 1989, which has enabled researchers to track the movements of over 300 individuals tagged with Argos beacons and GPS. This unique combination of long-term and multi-level monitoring of an animal population has made it possible to go beyond simple correlations between climate change and population parameters, and to better understand the mechanisms involved. 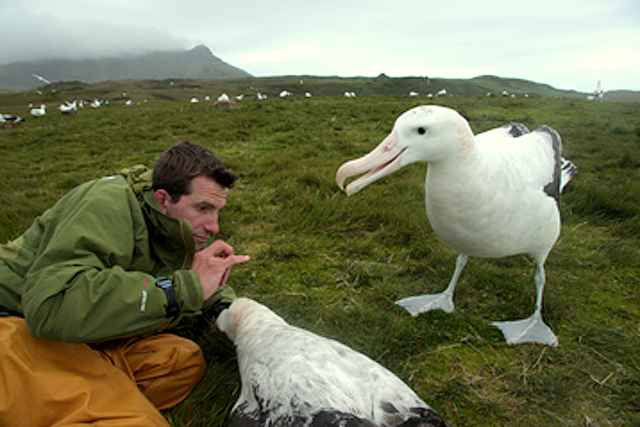 A scientist at work with Wandering Albatrosses in the Crozet Islands (Audrey Jaeger).

On the basis of telemetry data, the scientists have shown that breeding albatrosses have increased their flight speed and shifted their foraging territory southwards towards Antarctica in conjunction with changes in wind patterns, which enables the birds to find their food more rapidly. As a result, the duration of foraging expeditions has fallen by over 20%: it is currently 10 days on average, as compared with 13 days in the 1970s. This has resulted in improved breeding success and a spectacular one-kilogram increase in the average weight of the birds. Moreover, the southward shift of the distribution area of the females (previously threatened by subtropical tuna fisheries) has lessened the risk of their accidental capture. The consequences of climate change have so far been favourable to the population of Wandering Albatrosses in the Crozet Islands. However, climate scenarios predict a continued southward shift of westerly winds, which will gradually move the windy areas favourable to the albatrosses further away from the Crozet Islands.