A new study suggests that a quarter of threatened birds are already being negatively impacted by climate change and questions whether such adjustments could be the tipping point.

Scepticism of climate change may be on the rise in some political circles, but there's no turning a blind eye to animals that live in some of the world's most climate-susceptible ecosystems.

As BirdLife International described in its 2015 report The Messengers, our climate is already changing, and this is having an impact on our natural world. Birds and mammals all around the world are gradually shifting their distribution closer to the poles, seeking new homes at higher altitudes or declining in abundance and range. This is because of the effects of a warming planet which is upsetting the finely tuned balances of the habitats animals depend on for survival. Shifts in distribution in turn have wider consequences, upsetting food chains, migration patterns and more besides.

Now, a follow-up study shows for the first time the extent to which climate change is impacting on already-threatened species, and its findings have alarming consequences for the future of biodiversity on our planet.

The study discovered that the effects of climate change are applying further pressure to the world's most threatened species, often without us even noticing it. Modelling indicates that nearly half (47 per cent) of globally threatened terrestrial mammals and around a quarter (23.1 per cent) of globally threatened birds are already teetering on the edge of extinction, and left unchecked climate change could prove the tipping point.

The study was conducted by scientists from BirdLife International in collaboration with the Global Mammal Assessment Program at Sapienza University of Rome. One of the main objectives was to identify the traits and characteristics that put mammals and birds at risk from climate change. To achieve this, the team systematically reviewed over 100 previously published studies on species that had shown observed responses (whether positive or negative) to climate change.

Negative impacts include reduced breeding success or survival, declines in abundance or a decrease in range. In all, 70 studies on 120 mammals and 66 relating to 569 bird species, all published between 1990 and 2015, were reviewed. After analysing these studies, the team discovered that the mammals that are being most adversely affected by climate change are non-burrowing species which live in areas that have experienced large temperature changes in the past 60 years and that experience low year-round change in rainfall. 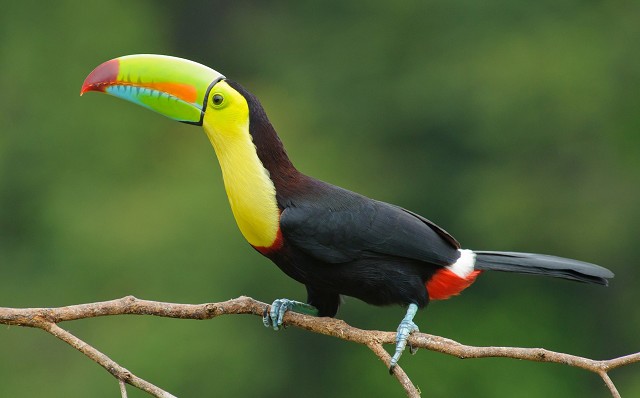 Keel-billed Toucan and other traditionally lowland species in Costa Rica now occur at elevations of up to 1,500 m because of climate change (Photo: Ttschleuder/wiki commons)

It is suspected that this is because, in areas where there is typically little seasonal change in temperature or rainfall, plant species develop narrower climatic tolerances — when such plants decline as climate changes, new types of vegetation take their place, causing problems for herbivores with very specialised diets.

This hypothesis is backed up by the data, with largely herbivorous orders such as Diprotodontia (marsupials), Primates, Cetartiodactyla (even-toed hoofed animals such as pigs, deer and cattle) and Proboscidea (elephants) among the most negatively effected.

Birds appear to be negatively affected by largely the same factors, although those that live at high altitudes are also at higher risk — this is simply because they have fewer opportunities to move northwards when temperatures begin to rise.

From these results, the scientists were able to model the relationship between species' traits and observed responses to climate change, and then apply this model to all globally threatened species worldwide — leading to a worrying projection that half of all threatened mammals and a quarter of all threatened birds are likely to have populations that have already been affected negatively by climate change.

"This is the first estimate of how many threatened species are already being negatively impacted by climate change" says Dr Stuart Butchart, Chief Scientist, BirdLife International and co-author of the paper. "The results ring loud alarm bells and show that climate change will exacerbate existing threats for many species, greatly increasing the scale of the conservation challenge."

It is clear from this analysis that the impact of climate change is being badly underestimated. Of the hundreds of species observed to have shown a negative response to climate change, only seven per cent of animals and four per cent of birds are coded as being threatened by climate change and severe weather by the IUCN Red List of Threatened Species. This suggests there is an urgent need for conservationists to reassess and adapt their ongoing programmes, to ensure that climate change doesn't deliver a final blow to already struggling species.